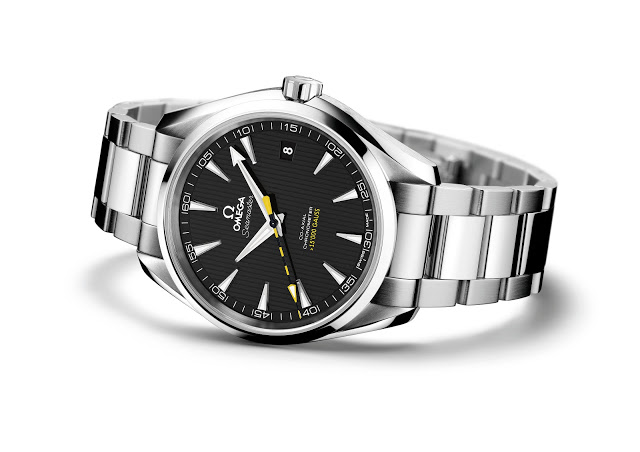 Omega has just announced an automatic movement that is resistant to magnetic fields of an unprecedented 15,000 gauss or more, which is equivalent to over 1,000,000 A/m. Typical antimagnetic wristwatches like the Rolex Milgauss (which gets its name from 1000 gauss) and IWC Ingenieur are resistant to 80,000 A/m. ﻿

According to Omega, this was achieved by using non-magnetic materials for some parts of the movement, presumably the escapement and balance assembly. Most antimagnetic watches use the simple solution of a soft iron cage surrounding the movement, which remains a stock calibre. This prototype movement has been fitted into the Omega Seamaster Aqua Terra with striking yellow accents, but the actual production piece will be unveiled during Baselworld 2013. These watches containing the Co-Axial calibre 8508 will be available in stores in 2013. Incidentally the last few months have seen a rash of antimagnetic watches announced, from Panerai’s Submersible Amagnetic to the Grand Seiko antimagnetic models. Even Habring2 recently said it is working on an antimagnetic movement with non-ferrous escapement parts. Beyond silicon parts and constant force mechanisms, antimagnetic calibres are a still novel, but fairly simple and cost effective, way to better chronometry, so expect more of them. – SJX 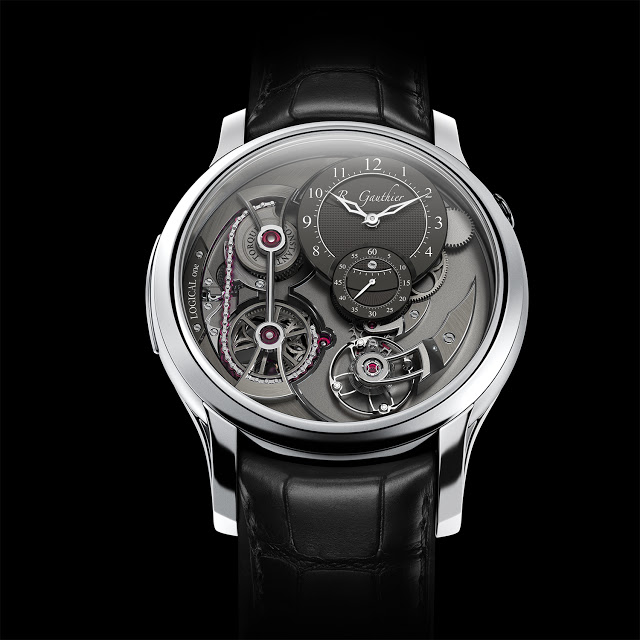 This has several unusual features, including a snail cam instead of a fusée, a chain with ruby links, push button winding and a barrel with sapphire inserts.

Instead of the traditional cone-shaped fusée to deliver constant torque, the Logical One has a snail cam which allows the links of the chain to be larger and stronger.

And instead of a traditional chain, this chain uses ruby inserts for minimum friction and finer tolerances.

Winding is accomplished by pressing a button in the case at nine o’clock, which transmits the force to the barrel on the same plane Inside the barrel, a pair of sapphire plates sandwich the mainspring, which minimises wear inside the barrel over time. This is similar to what Denis Flageollet at De Bethune devised several years ago for the Super Sport watch. The Logical One also sports a high-end movement finish, including an unusual double-angle anglage, which comprises of two parallel, polished bevels on the bridges. The case size is 43 mm and available in red gold or platinum. – SJX 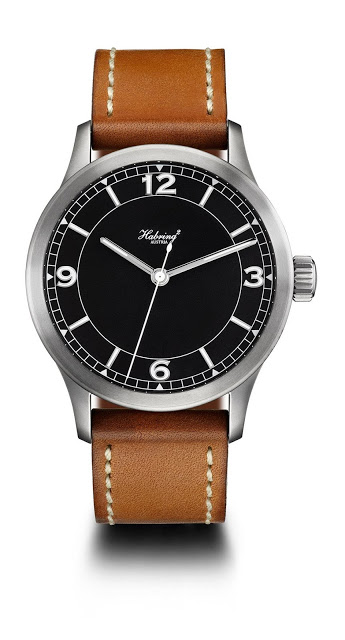 Austrian independent watchmaker Habring2 now has a pilot’s styled version of its signature dead seconds wristwatch available. Based on a Valjoux calibre, and available either as a manual wind or automatic, the movement is now made nearly all in-house by Habring2.

In addition the case has a brushed finish, unlike all earlier models which have a polished finish. And the case is also available in titanium. Interestingly, Habring2 will also offer the pilot’s style jumping seconds with an antimagnetic movement. Instead of the simple solution of a soft iron cage, Habring2 is working on a non-magnetic escapement that is still undergoing testing but will likely be rated to more than 80,000 A/m as is common in anti-magnetic watches. The jumping seconds starts with EUR3250 for the manual wind and EUR3550 for the automatic in a brushed steel case. And the premium for a titanium case is EUR1000. – SJX