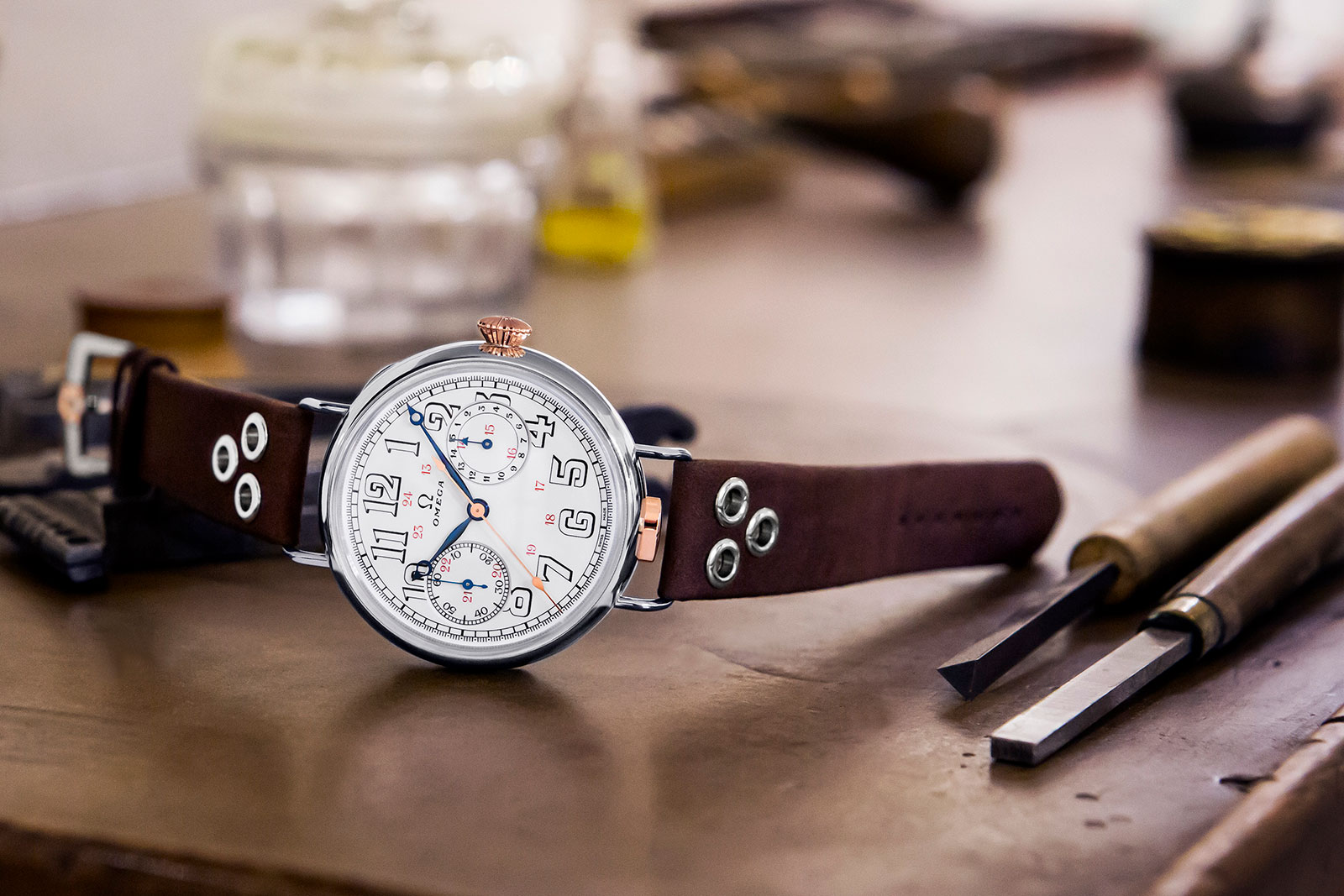 To mark the debut of the very first wristwatch chronograph ever, Omega has rolled out its most unusual and impressive timepiece in recent memory. Named the First Omega Wrist-Chronograph Limited Edition, the watch is actually a modern remake of a vintage watch – but one actually powered by a vintage movement, an 18”’CHRO that’s been artfully and artisanally refinished.

The original 18”’CHRO chronograph was the first serially produced wristwatch chronograph, though the movement originated as a pocket watch calibre, hence its large, 18”’ size. Omega spent five years accumulating vintage 18”’CHRO watches, all circa 1913, for this limited edition that was just unveiled by Omega President Raynald Aeschlimann at an event inside the company’s museum. While the modern 18”’CHRO is a dead ringer for the vintage original, it has the heft and solidity of a modern watch. Constructed to modern norms for rigidity and water-resistance, the case is 47.5mm, just like its vintage inspiration, but in 18k white gold, with the crown and mono-pusher in 18k Sedna red gold. While the diameter is the same as the 1913 original, the case is noticeably thicker, largely due to the sapphire crystals and substantial, hinged case back. Glossy and white, the dial is made of grand feu, or vitreous enamel, with black enamel markings applied via pad printing. Both chronograph registers are recessed and made of separate discs of fired enamel that are each secured to the main dial from below. And the hands are blued steel, Breguet-style, though the central chronograph seconds hand is red gold. But the best part of the watch is the refinished 18”’CHRO movement, built at the workshop typically specialising in the Omega Central Tourbillon. Omega product management head Gregory Kissling said it takes some 700 hours to complete the movement, starting with the vintage original. Ordinarily that might be dismissed as typical industry hyperbole, but the movement inside the limited edition is exemplary. Most of the larger components, including the base plate, bridges, chronograph levers, and balance wheel, of the original movements were retained, though they were refinished to an even higher degree than originally produced. The base plate and bridges, for instance, were given a new coat of gilding, with their top surfaces frosted and edges bevelled and chamfered. Even the tiny, original pallet fork is black polished and bevelled along its edges.

Other parts had to be made from scratch. New components include the wheels of the gear train as well as the hairspring. All the new parts were made by hand, just as they would be at watchmaking school. That means wheels are turned on a lathe, the teeth then cut with a topping tool, while the balance spring was coiled by hand. New jewels were also used, meaning the holes in the base plate and bridges had to be redone, and the original pivots polished anew.

The result is a movement that shines like one that is produced by an artisanal independent watchmaker, and not a company that makes over 700,000 watches a year. Magnificent effort was put into it, and it shows.

And to top it all off, the watch is delivered in a hand-made, wood frame, leather-clad box produced by a Parisian trunk maker. According to an Omega insider, the box costs Omega as much as a Speedmaster retails for. Initial thoughts on the watch

The 18”’CHRO remake wears as large as a 47.5mm watch does, and it is also weighty. That makes it an impractical watch, but any impracticality is quickly forgotten when the remarkable quality and attention to detail, inside and out, is revealed. The price tag is eye-wateringly high, but the amount of work put into the movement is tremendous. It is chock full of serious, old-fashioned watchmaking skill and labour. The First Omega Wrist-Chronograph Limited Edition is a limited edition of 18 watches, priced at SFr120,000 before taxes, which is equivalent to US$121,000. It will be available starting end July 2018.