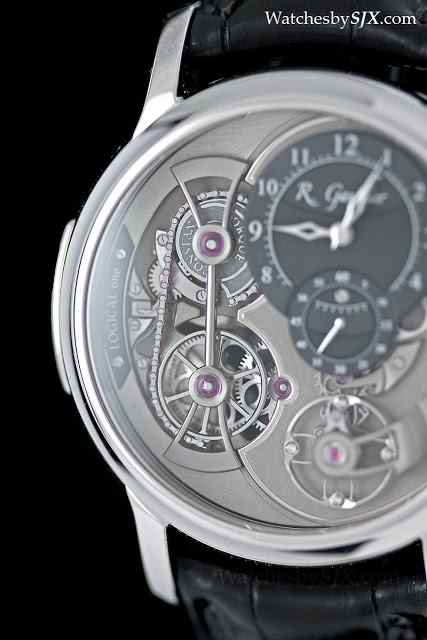 Instead of the fusée it has a snail cam. This actually works in the same manner as the fusée, except the chain coils on a single plane around the snail came, instead of upwards around a cone as is the case with a chain and fusée. According to Romain, the snail cam achieves the same constant torque as the traditional fusée, but enables chain to be shorter, meaning its links can be larger and stronger. And the chain also have ruby inserts in between the links to minimise friction and further increase its longevity.

The front of the watch has a lot going on, all the mechanics of the movement added to the busy sub-dials for the hours and minutes, as well as seconds. I would have preferred more concise sub-dials.

That being said, the layout of the movement is obvious from the front and back. At nine o’clock lies the chain and snail cam, and at one o’clock is the time setting and display gearing. Directly below the time display is the gear train, and below the balance wheel is the single barrel.

Because this watch has no crown, winding is done by pushing the button in the case at nine o’clock. To get a fully wound barrel, the button needs to be pressed about 40 times.

The time, on the other hand, is set via the button at one o’clock.

The movement has a frosted finish on the flat surfaces, along with prominent, polished bevels. All of the wheels have Romain Gauthier’s signature circular spokes. The constant force mechanism is secured with a rounded and black polished steel bridge, much like a tourbillon bridge. Romain Gauthier justifiably takes pride in his movement finishing, and the Logical One demonstrates a new type of bevelling he is using for the first time. The bridge for the gear train, visible on the back, has a stepped, bevelled edge, in effect double anglage. Most of the movement components are made in-house, including the adjustable mass balance and proprietary escapement. Though the case is 43 mm, the watch seems smaller, likely due to the relatively wide bezel and lack of crown.

Available in rose gold or platinum, theLogical One is has different movement treatments for each case metal. The platinum is practically monochromatic, while the gilded movement components of rose gold version stand out vividly.

NB: The watch pictured is a prototype, hence the roughness of some movement parts, and also the missing power reserve display on the back.