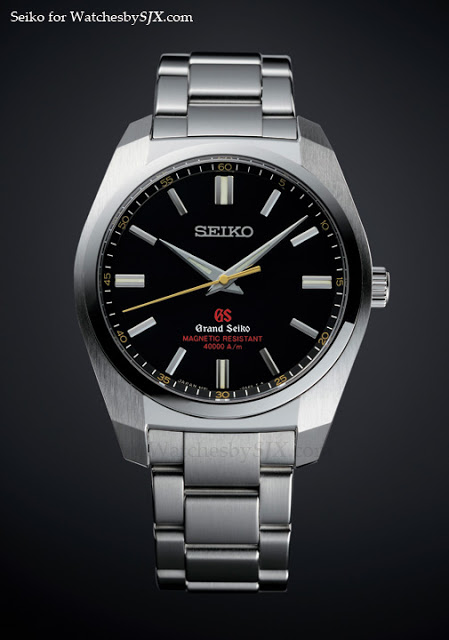 Seiko has been quite prolific with new models this year, most recently with its Star Wars collaboration. It recently announced the return of the antimagnetic Grand Seiko watches, with both automatic and quartz models. These are Seiko’s answer to the Rolex Milgauss or IWC Ingenieur, though unlike the competition the Grand Seiko lacks a sexy name. Like the competition, the antimagnetic Grand Seiko watches have an iron cage around the movement. This is the third notable series of Grand Seiko this year, after the blue dial GMT anniversary editions and the specially adjusted High Beat models.

Two quartz models are available, both of which use Seiko’s highly precise 9F61 quartz movement rated to 10 seconds a year. The first is a 500 piece limited edition with black dial (ref. SBGX089, pictured above), and the other is regular production with a light grey dial (ref. SBGX091).

Case diameter is 38.8 mm while magnetism resistance is 40,000 A/m, which is the same as the new antimagnetic Panerai Submersible PAM389. Both are priced at JPY315,000 which includes Japanese consumption tax. That works out to about USD4050. Delivery starts on October 12, 2012.

Similarly two dial colours are available for the 9S65 equipped automatic version as well, white (SBGR077) and black (SBGR079). These are magnetism resistant to 80,000 A/m, just like the Milgauss and Ingenieur. The steel case is 39.4 mm in diameter.

The mechanical models are exclusive to Seiko Master Shops (select, high-end Seiko retailers) and will cost JPY525,000 with tax, about USD6750. It will be available starting November 9, 2012.