The Romain Gauthier Logical One was launched in 2013 to critical acclaim, and clinched the year’s award for Best Men’s Complication at the Grand Prix d’Horlogerie de Genève (GPHG). While centred on the very old idea of a chain and fusée, the Logical One stood in contrast to contemporary wristwatches with the same complication.

Since its debut, the Logical One has been iterated multiple times, with variations covering the spectrum from traditional to ultra-contemporary. The attractiveness of the many versions vary – some are overdone – while others are a perfect fit for the impressive movement. One that works perfectly is the unique Logical One Byzantine that has the striking combination of a blue enamel dial and movement bridges bridges engraved with a motif inspired by Byzantine art. (Though this specific combination is unique, similar-looking examples have been produced, for instance with blue sub-dials but without engraving.) 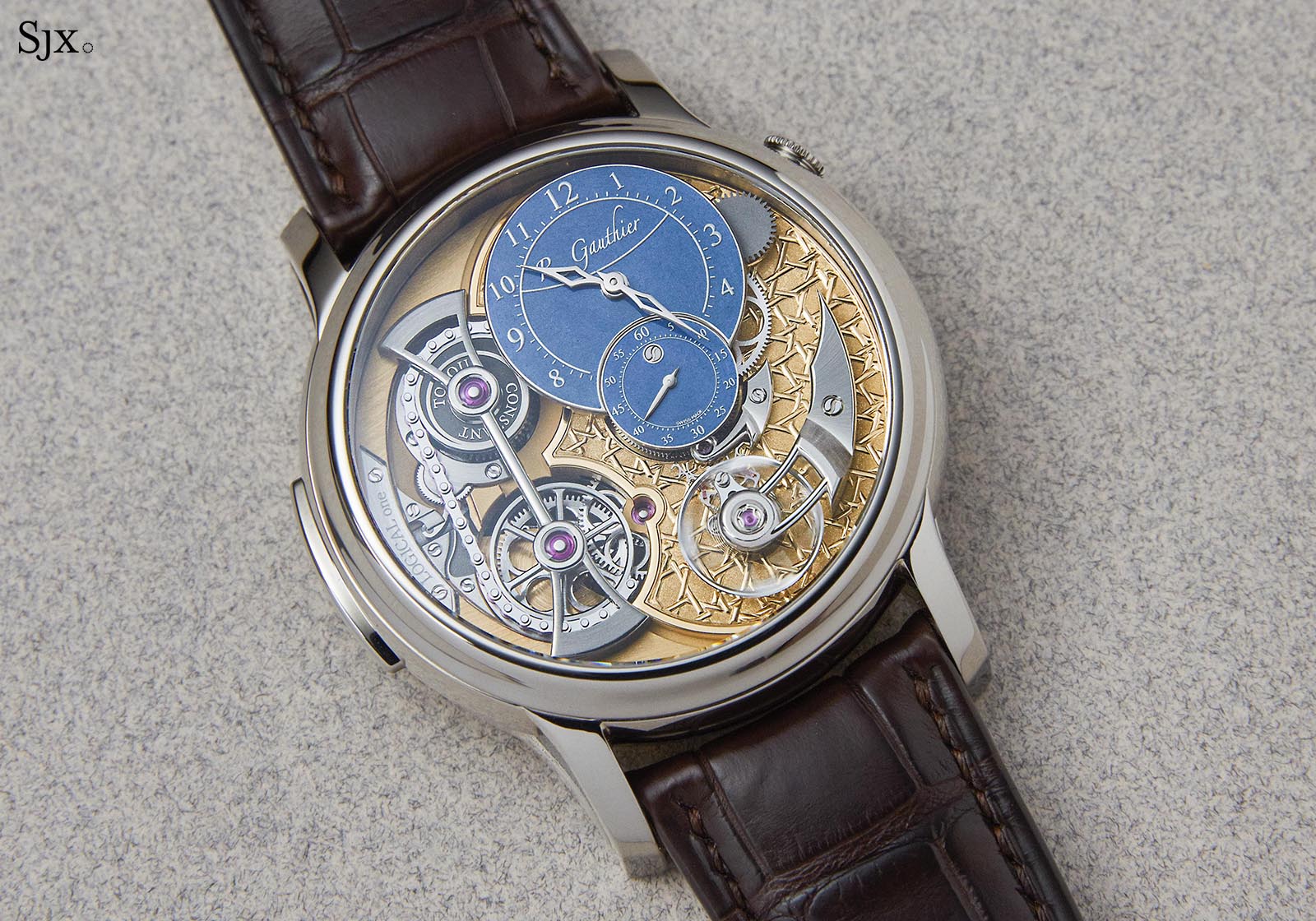 Due to the complex architecture of the movement – with includes the chain and fusee – the Logical One is big for a classical watch, measuring 43 mm in diameter and 14.2 mm high.

However, it does appear smaller because there are minimal protrusions from the case; the time-setting crown is flat and located at two o’clock. The mainspring barrel, on the other hand, is wound by a pusher at nine o’clock. Hence, though the case has a conventional round shape, these recessed details alter the way it wears and feels on the wrist. 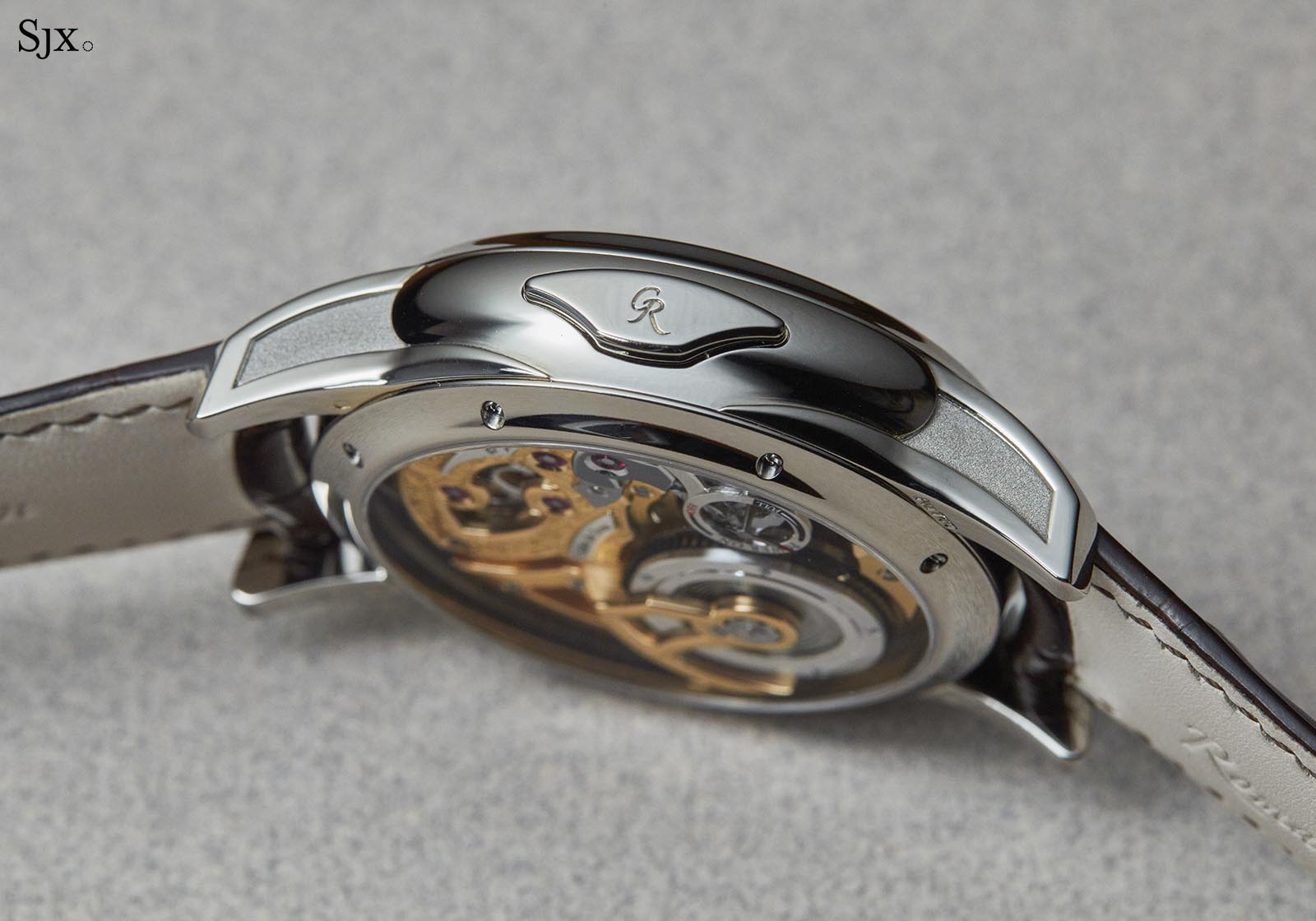 The pusher that winds the mainspring

The bezel has a concave surface while the lugs are lengthy and curved downwards, offering a rather comfortable fit on the wrist.

Case finishing is beautifully executed; it is predominantly polished, but with recessed flanks that are frosted. The polished top surfaces of the case offer a great contrast against the frosted dial. 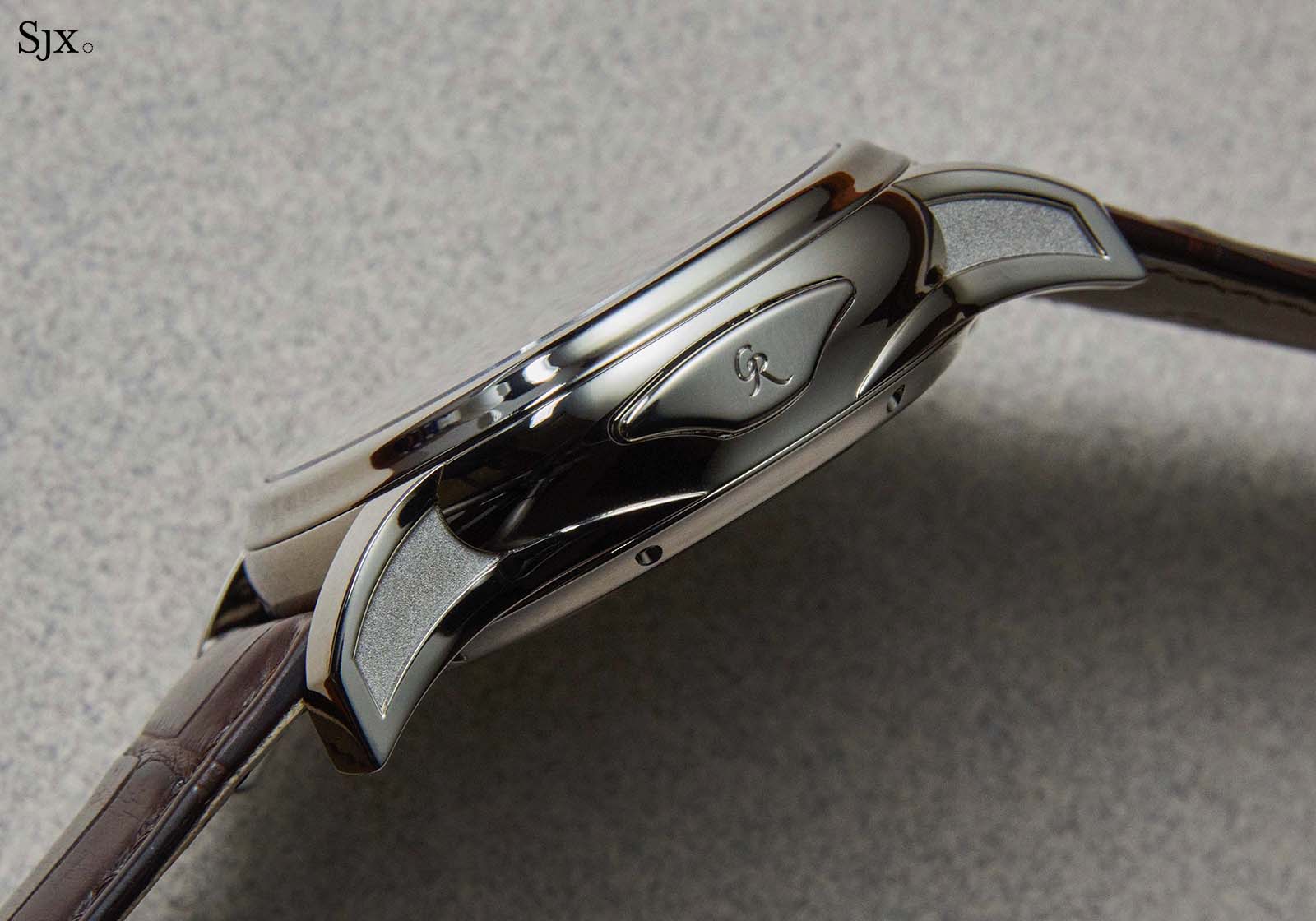 Visible on both the front and back, the movement is constructed with an unusual layout even for a fusée-and-chain watch. The mainspring barrel, for instance, is located directly below the balance wheel.

The fusée and chain occupy the left half of the dial while the gear for the fusée drives the going train on the right half of the dial. Thus, the sub-dials for the hour and minutes and the small seconds are located on the top right, with the escapement entirely visible beneath it, with the especially designed balance wheel in place by a palladium-treated cock. 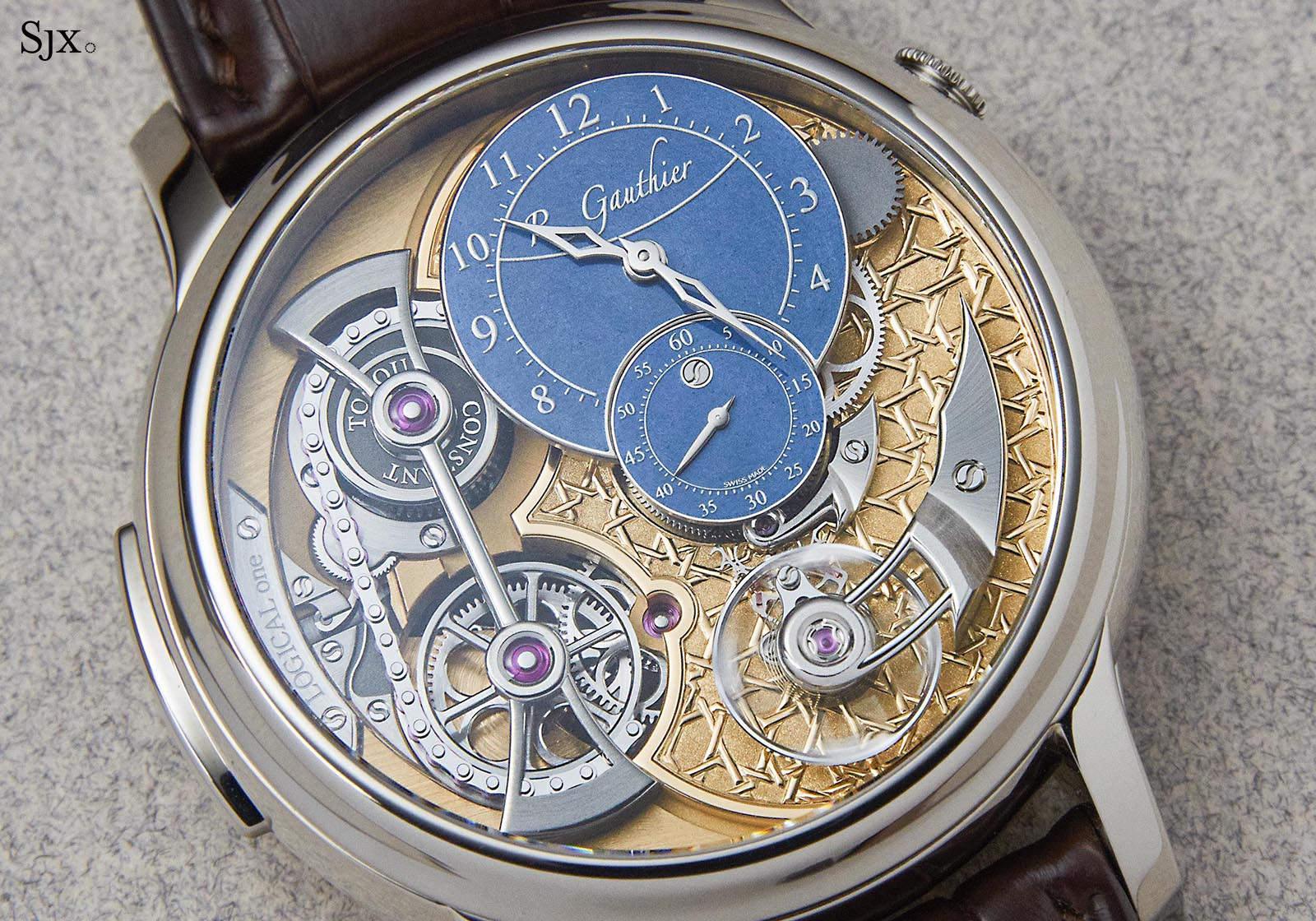 From the back, the view is equally complex and elaborate, with four layers visible, giving the movement great depth.

In fact, because of the numerous mechanical parts and minimal engraved bridge, it looks more mechanical than on the front. The going train bridge, engraved with the Byzantine motif, provides most of the decorative detail on the back. 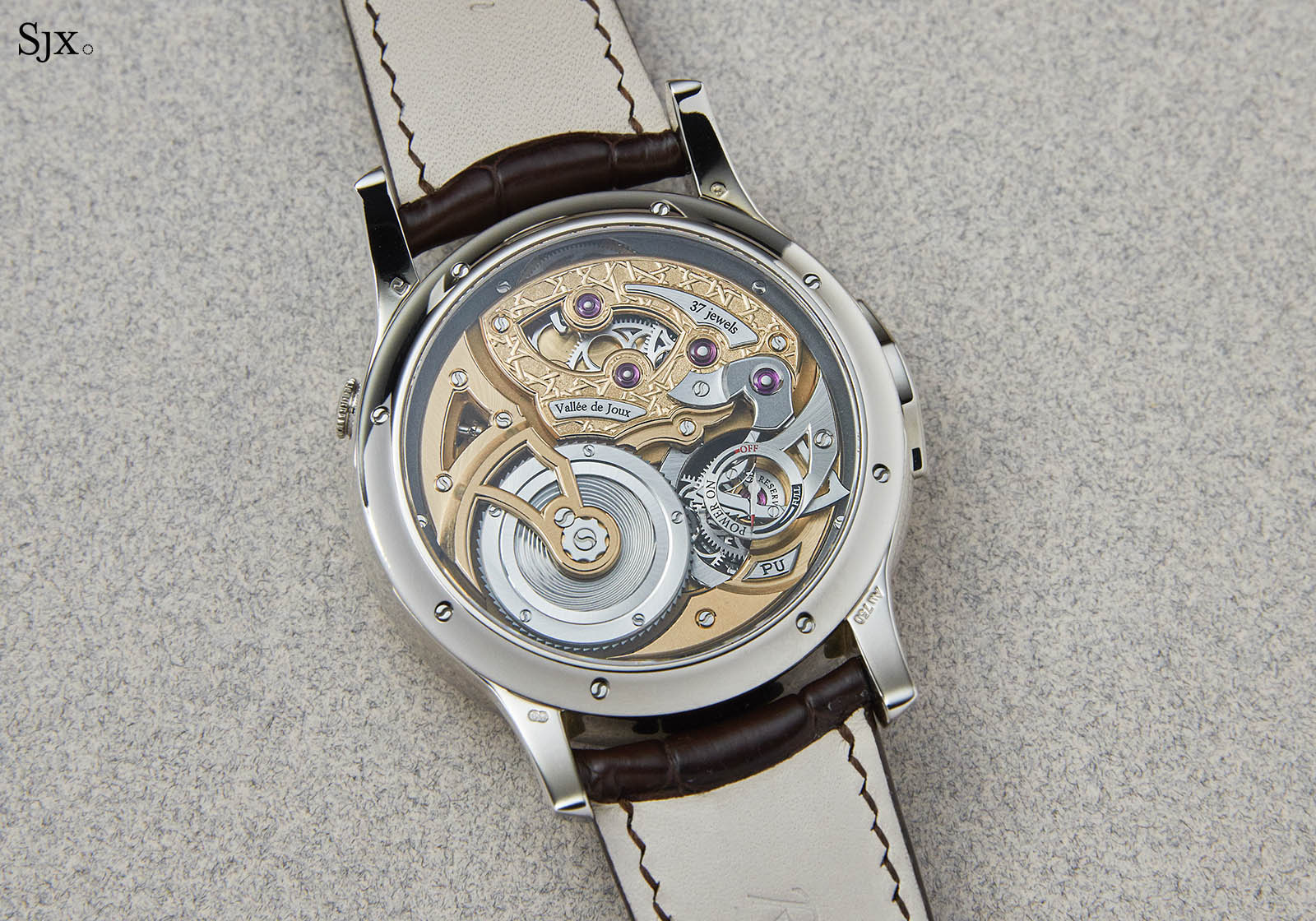 Located at five o’clock is a power reserve display, and right above is a wide steel cock holding the rack that winds the mainspring when the pusher is depressed. 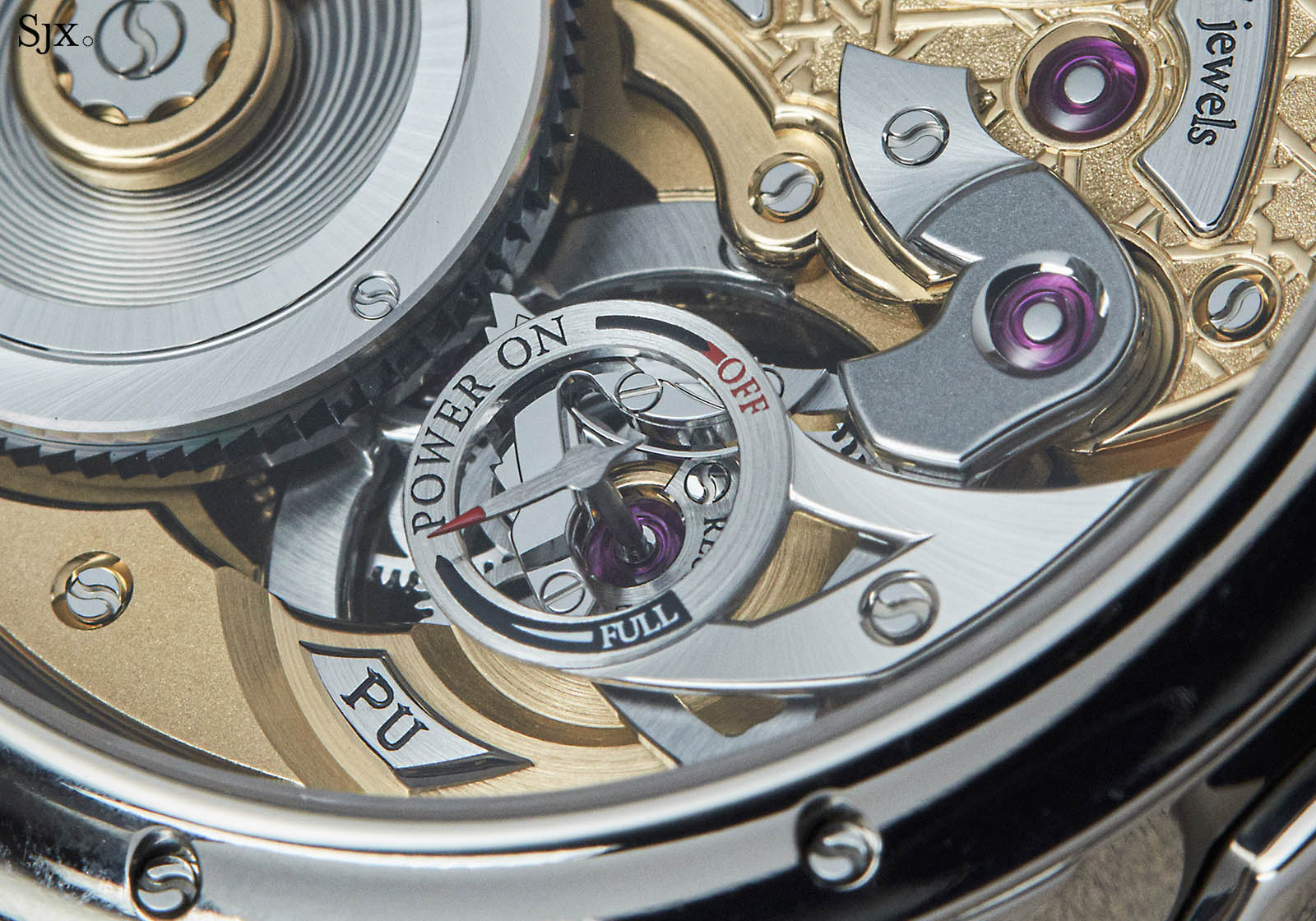 Invented when movements were regulated by verge escapements – which means a long, long, long time ago, starting around the 13th century – the fusée and chain is a primitive form of constant force delivery. Because a verge escapement had no hairspring – it was essentially a pivoting rod mounted perpendicular against a saw-toothed escape wheel – it were extremely sensitive to fluctuations in power delivered by the mainspring. The fusée and chain was developed to ensure an even supply of power as the mainspring unwound.

A traditional fusée and chain consists of a chain with one end connected to the barrel and the other to the fusée, a cone that sits on the centre wheel arbor. It provides constant force by relying on the principle of leverage, which is all about multiplying force when it is exerted further away from the fulcrum. 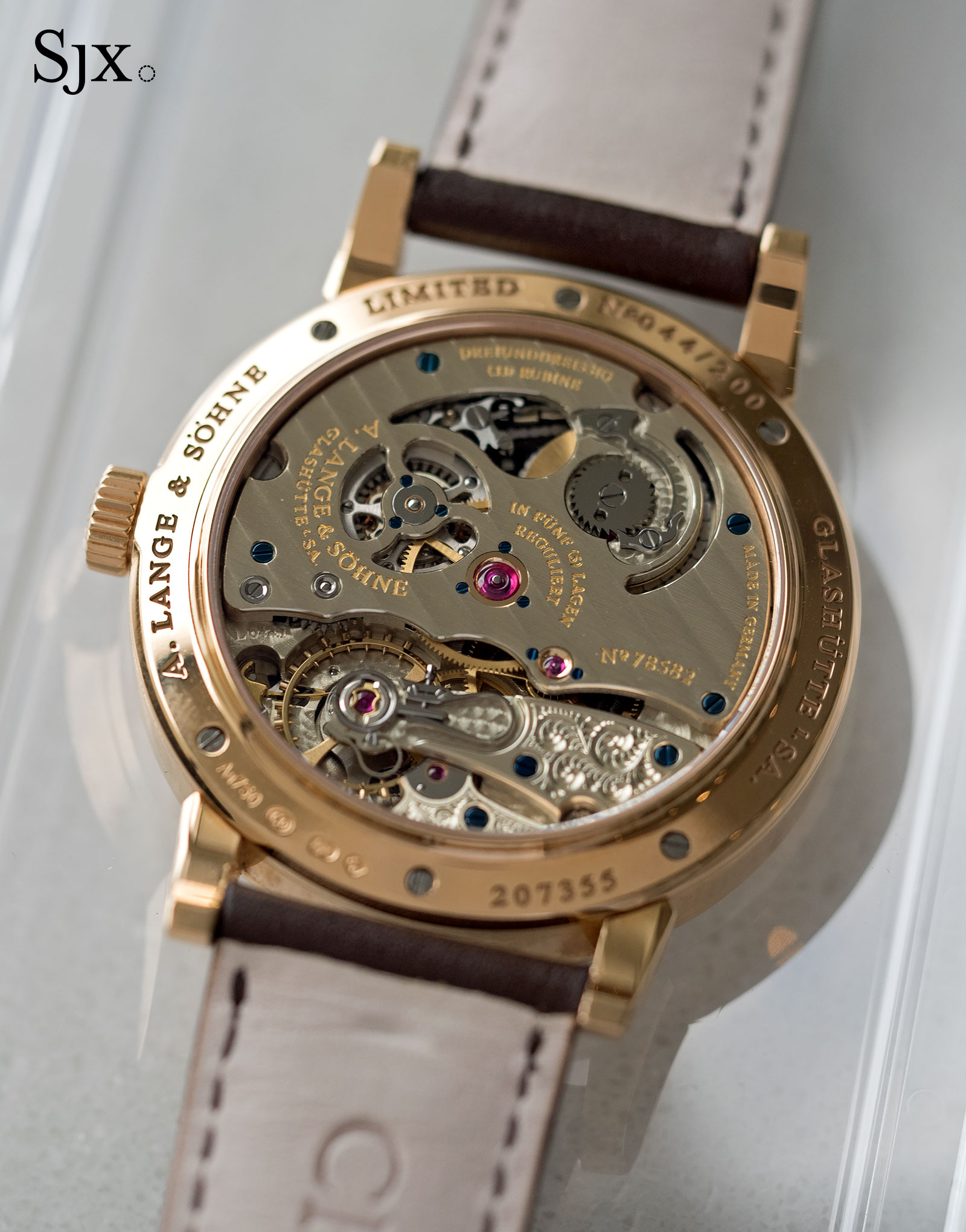 The Richard Lange Pour le Merite by A. Lange & Söhne with a classical chain and fusee 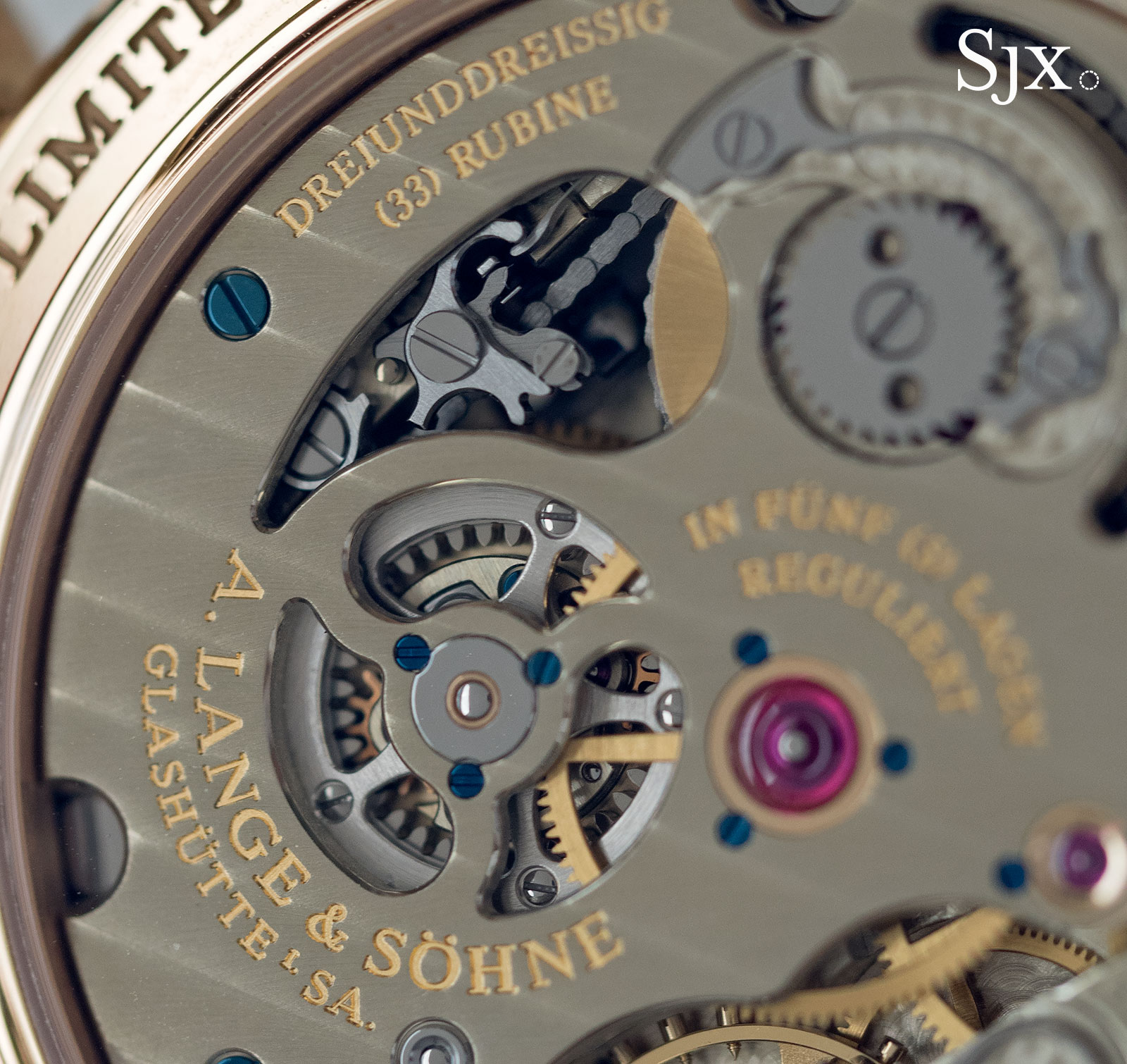 However, the antiquated mode of delivering constant force is not without its limitations. The entire set-up occupies a lot of space, which means there’s less room left for other functions. At the same time, the length of the chain means its individual links are small by necessity, making them rather fragile. Because of the angle of the chain as it transmits force between the fusee and barrel, significant tension is created in the chain, which meant broken links were not uncommon in the chain and fusee mechanisms of old.

The Logical One delivers a unique twist to the concept, with several innovative solutions to improve its performance. The fusée, visible at ten o’clock on the dial is not actually a cone but instead a flat snail cam; it translates the three dimensional wide-to-narrow circumference of a fusee into a flat, two-dimensional shape with the same properties.

The snail cam is connected to an intermediary drive wheel at eight o’clock, rather than the barrel as is convention. And because the snail cam and mainspring barrel are on the same plane, there is no offset angle and force on the chain is always transmitted in a straight line, resulting in less stress on its links.

Despite being vastly different in shape and size, the snail cam delivers the same constant torque as a fusée, but allows the chain to be shorter, meaning its links can be larger, therefore sturdier and stronger. In addition, the chain is fitted with a synthetic ruby within each link to reduce friction as it travels from snail cam to barrel, and vice versa. 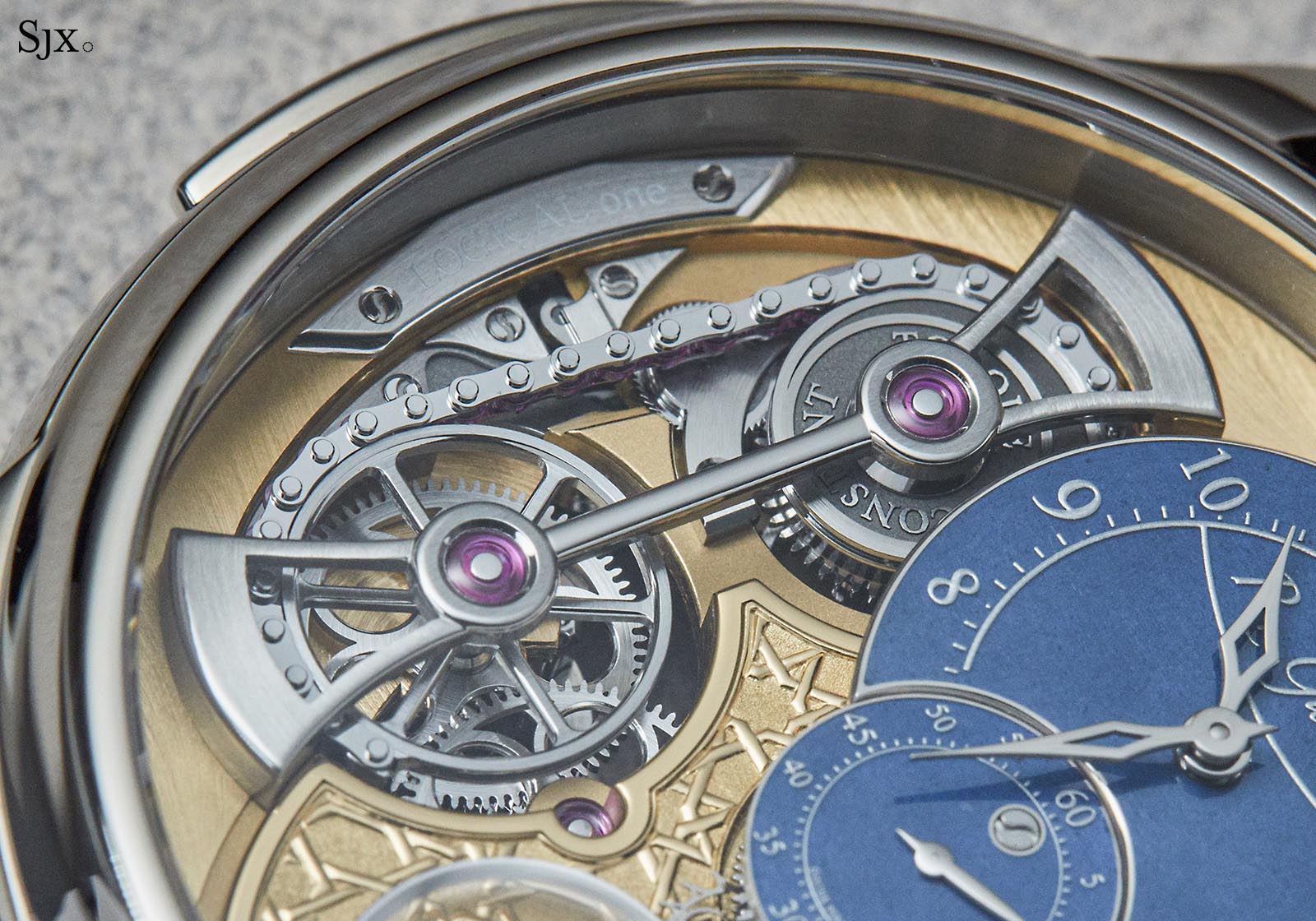 And instead of a traditional crown fixed to narrow stem that has to transmit energy from the vertical plane of the hand-winding motion to the horizontal plane of the mainspring, the pusher-winder transmits energy to the barrel across the same plane.

Each push of the button at nine o’clock winds the barrel – a straightforward and intuitive method of winding. But because the button is flat and its motion shallow, it takes quite a few pushes, 40 in fact, to get to full wind. The overly tedious winding process is the primary downside of the winding mechanism.

Seen from the back, the barrel is seemingly open, but it is actually transparent. The cover and base of the barrel are sapphire crystal plates, meant to reduce the friction of the mainspring against the barrel interior, thereby minimising energy loss.

And mounted on the barrel cover is a black-polished  nut that holds down the mainspring. 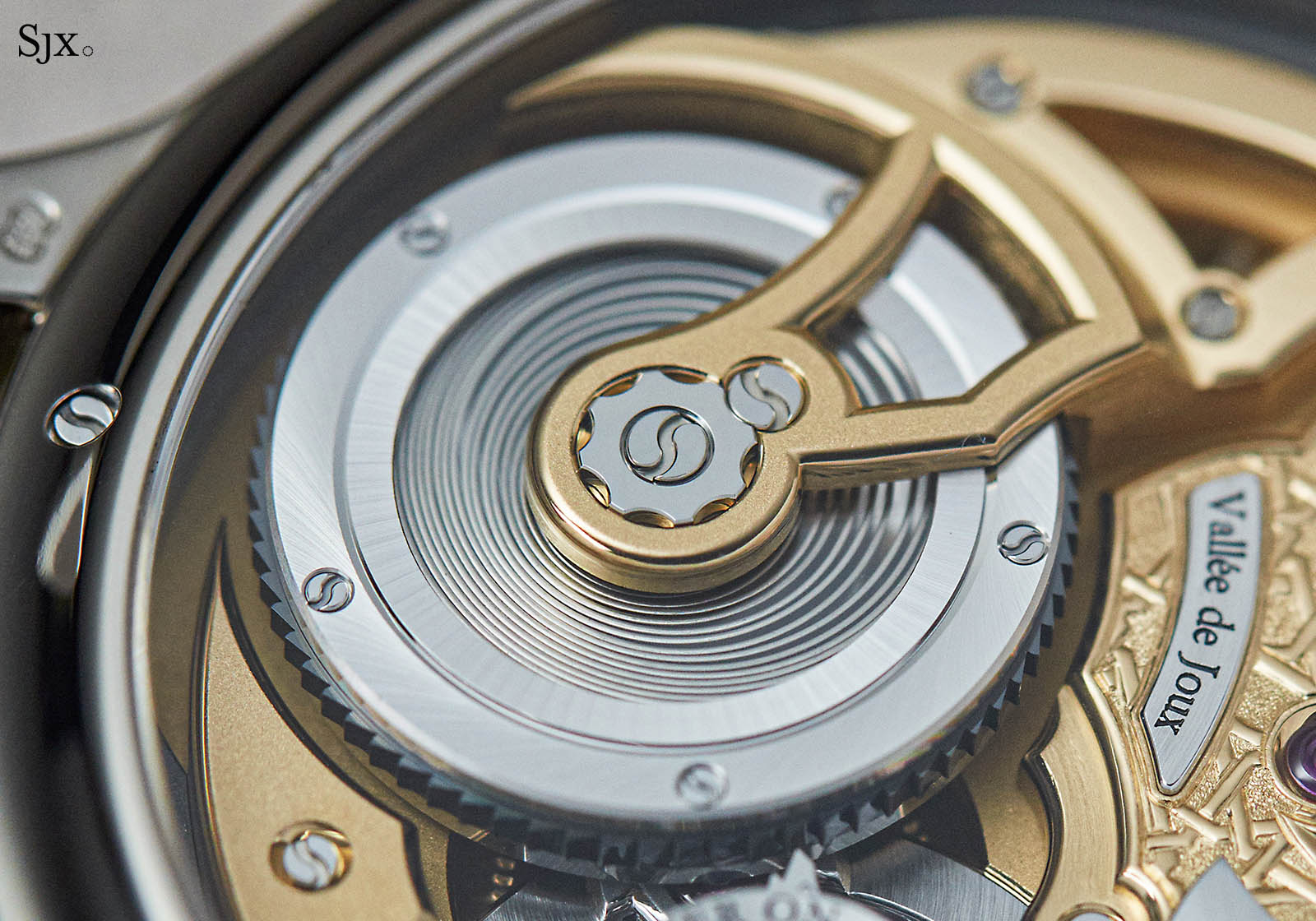 With all that is going on with the constant force mechanism, other interesting bits of the Logical One often get overlooked, including the proprietary escapement and balance. The free-sprung balance wheel is Romain Gauthier’s own design, and held in place by a large palladium-treated cock.

Instead of a conventional, T-shaped pallet lever, Romain Gauthier’s version features a triangular form to improve stability and longevity. In a typical Swiss lever escapement, the escape wheel exerts a force in the opposite direction of the locking and unlocking action of the lever, which may cause deformation of the lever over time. A triangular structure thus offers greater support, since a triangle is more rigid than a “T”. 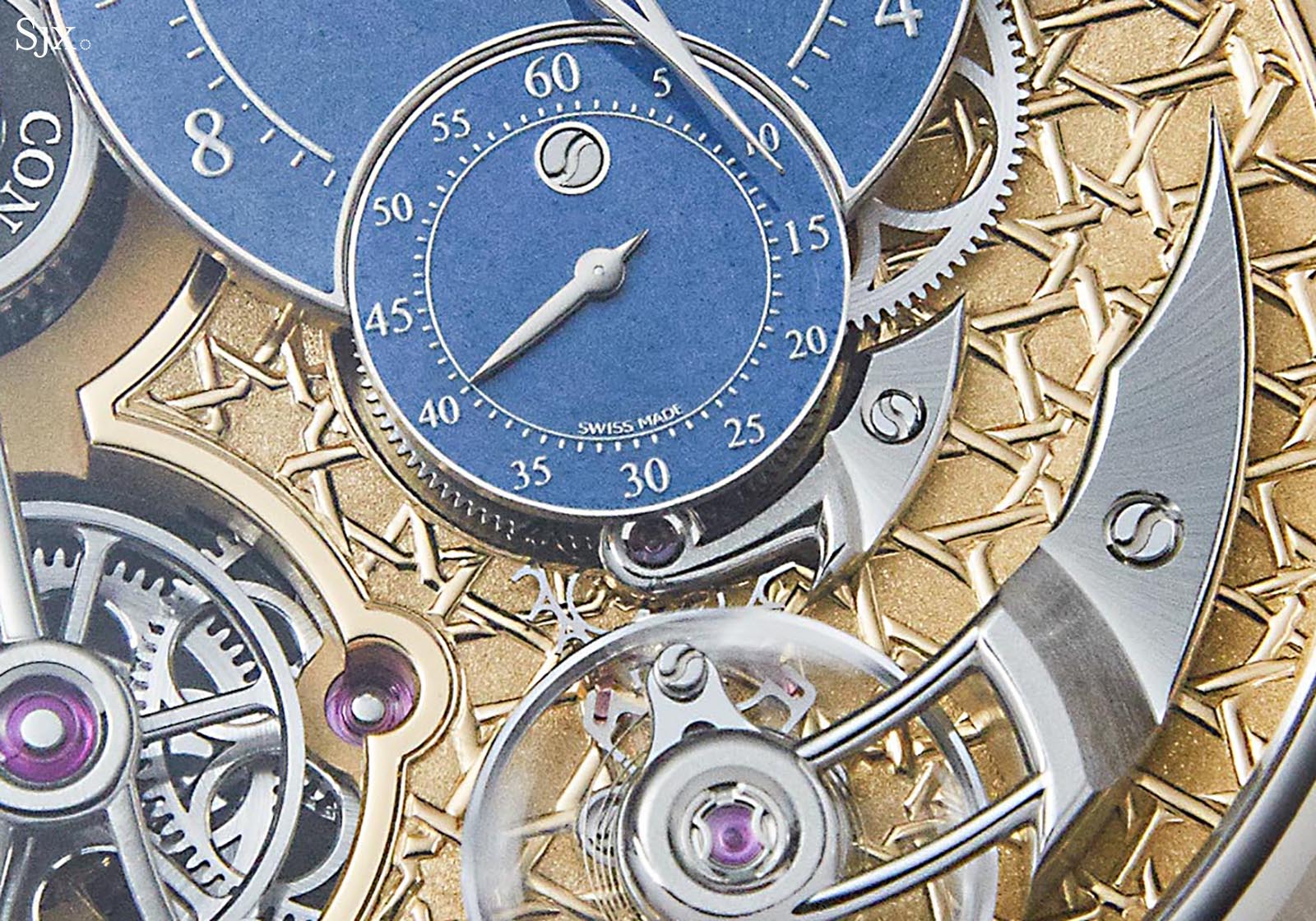 Romain Gauthier is probably best known for its finishing. So it’s no surprise the Logical One, front and back, is ever impressive. The movement was no doubt laid out in an creative way to exhibit the brand’s exemplary standard of decoration.

The sub-dials in this version are in blue grand feu enamel, while the gilded main plate and bridges have a frosted finish and a geometric pattern that required a hundred hours to engrave by hand.

Beautiful in its detail, the engraving is in relief and sharply done, even under magnification. It is reminiscent of engraved dials occasionally offered by F.P. Journe, especially the Régence Circulaire pattern found on the final edition of the discontinued Tourbillon Souverain. 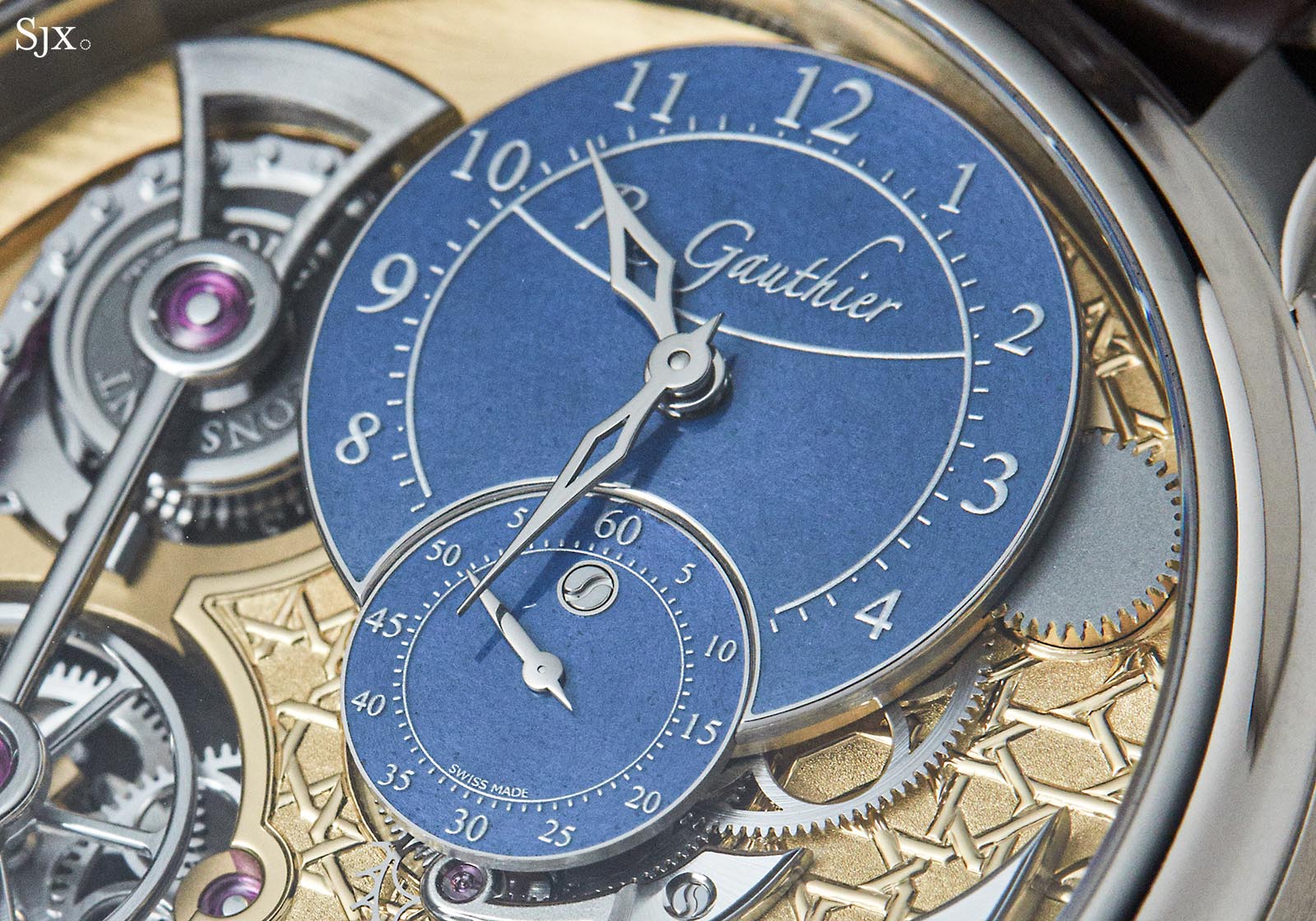 On the front, the bridge for the snail cam and the drive wheel as well as the cock for the balance have fully rounded, black-polished arms. The most subtle yet striking detail on the dial side is the tiny cock that secures the escape wheel; it boasts a deep inward angle on its chamfered edge.

If one were unreasonably demanding, there is one tiny aspect of the decoration that could be even more elaborate: a sharp, angular border between the jewel bearings to the rounded arm on the chain and fusee bridge. 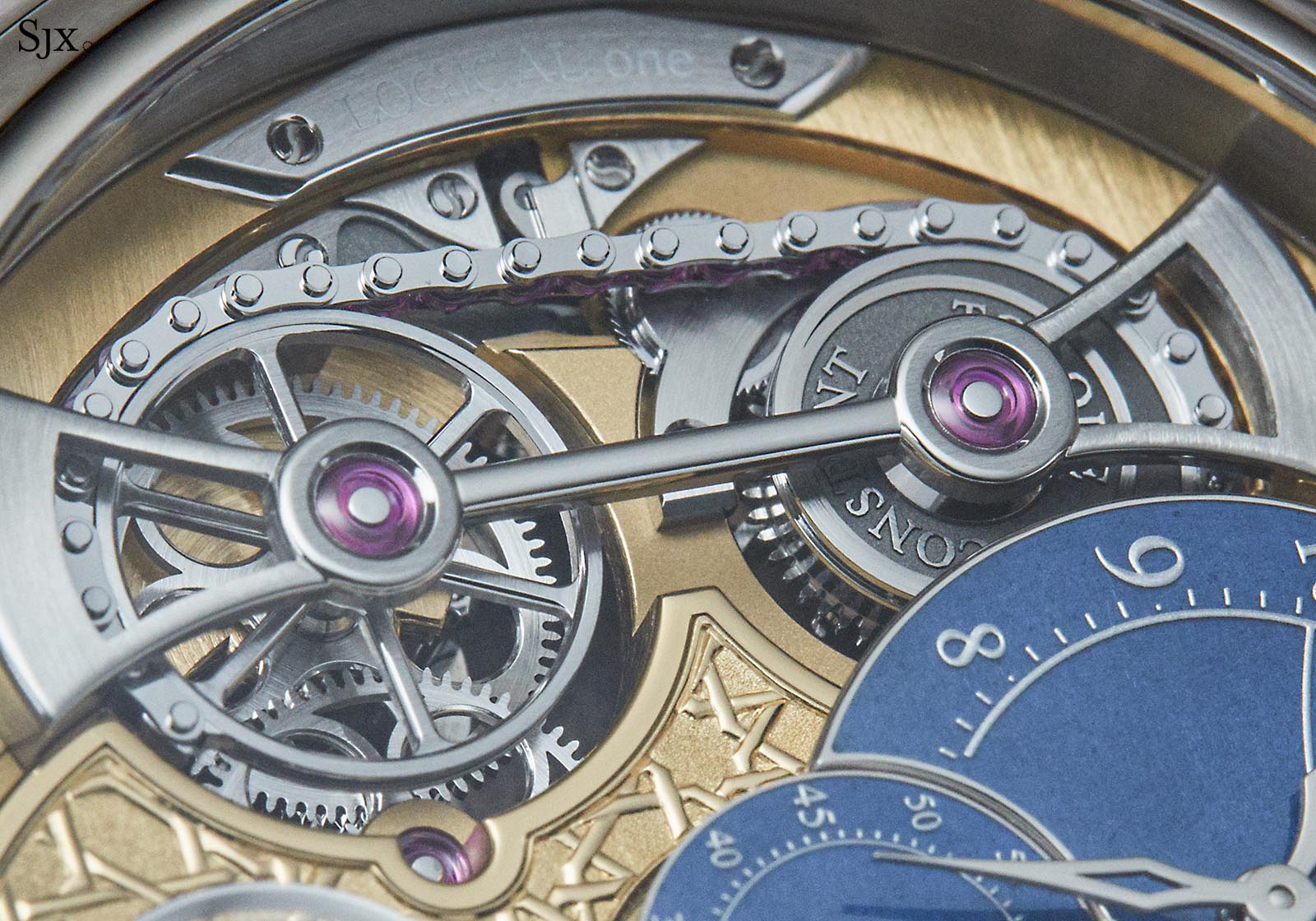 With more of the mechanics visible, the back of the watch is even more complex and offers more visible decoration.

The magnificent contours of the bridges and cocks allow for an abundance of anglage as well as inward and outward angles. In addition, the depth of the movement is further enhanced by a mix of brushed, frosted and textured top surfaces. 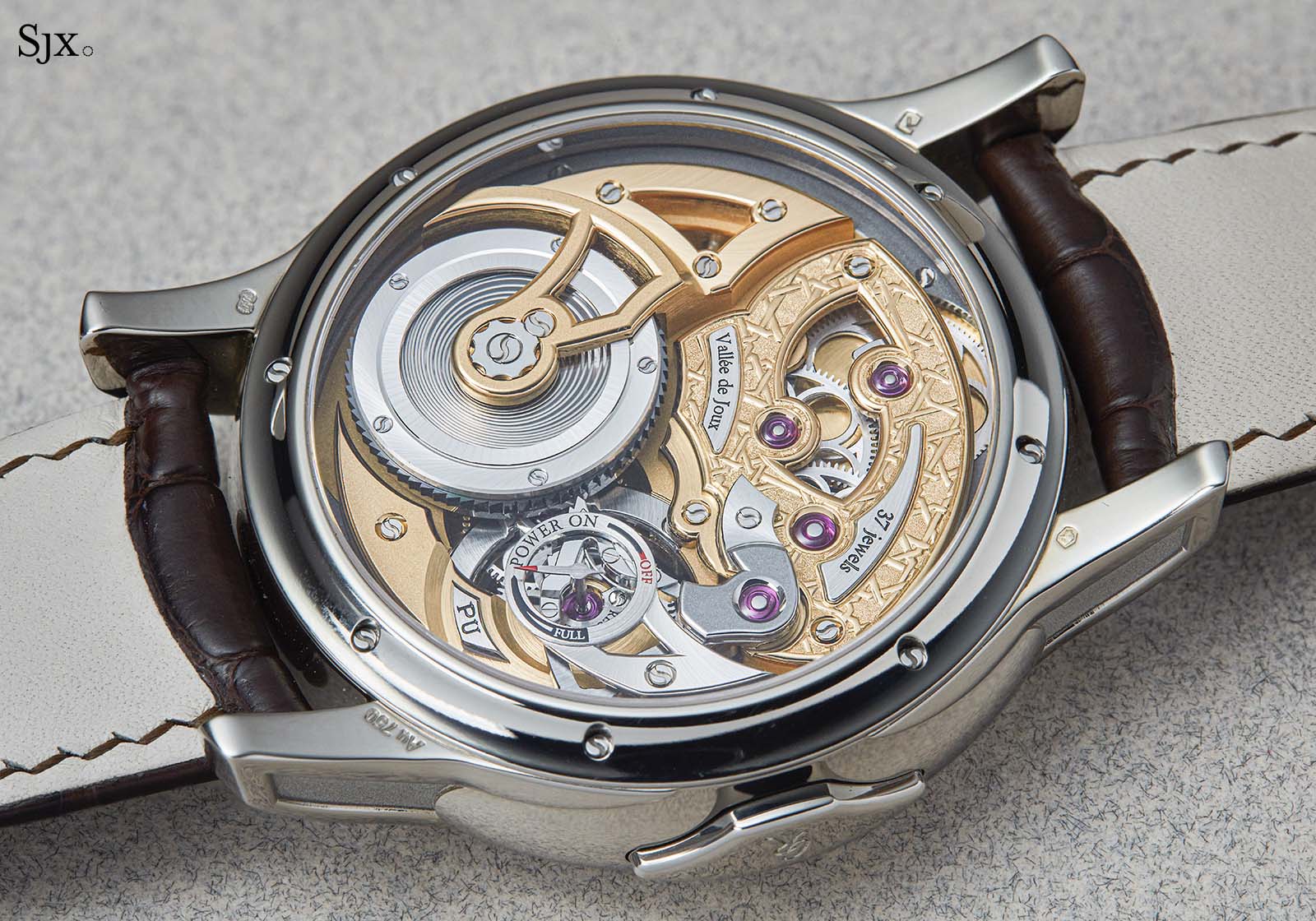 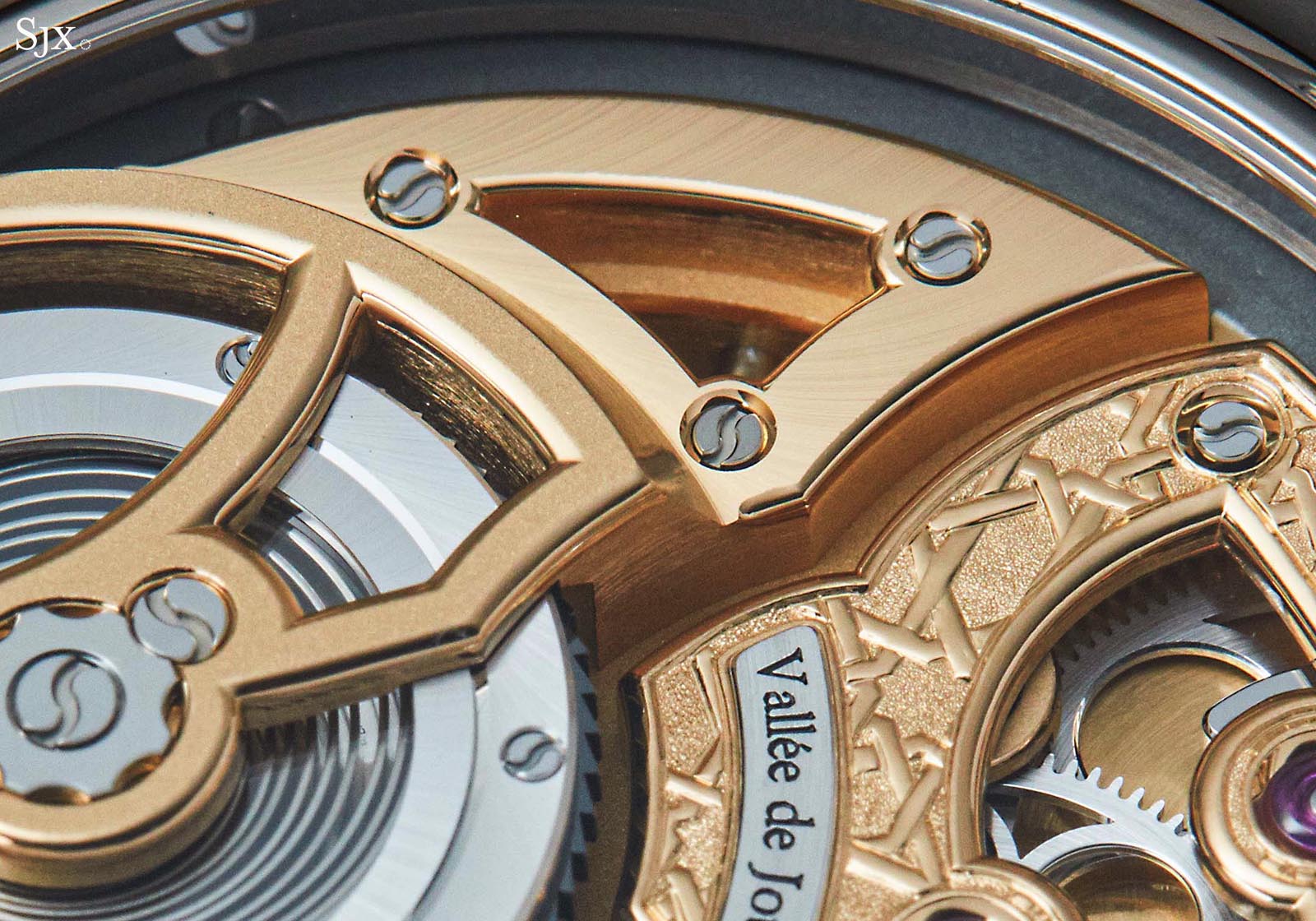 The finishing has been done to an obsessive level: even the slightest inner corner of the bridges is sharply bevelled while the edges of the bridges are finished with wide, rounded anglage. The screws and jewels also sit in wide, mirror-polished countersinks.

And to match the striking contours of the movement, all the wheel wheels, including the escape wheel, have Romain Gauthier’s signature circular spokes that bring to mind flowers. Similarly, all screws are proprietary and feature a patented, S-shaped slot that require a custom screwdriver. Seven years on, the Logical One remains the most impressive and superlative fusée-and-chain watch on the market. The extreme level of finishing, along with the innovation construction of the constant-force mechanism and movement, makes the Logical One an extremely unique and compelling proposition.

It is also unusual coming from an independent watchmaker, all other watches equipped with the same mechanism are made by establishment brands like A. Lange & Söhne, Ferdinand Berthoud (which is a sub-brand of Chopard), and Breguet.

The Logical One Byzantine has a price tag of 180,000 Swiss francs, compared to the 140,000 francs or so for the standard version without an engraved movement or enamel dial.

While the standard Logical One is fairly priced relative to the competition, especially given the finishing and architecture, the Byzantine one-off costs a lot more, which reduces the value proposition. That being said, while substantial, the surcharge is not outrageous as such things go.