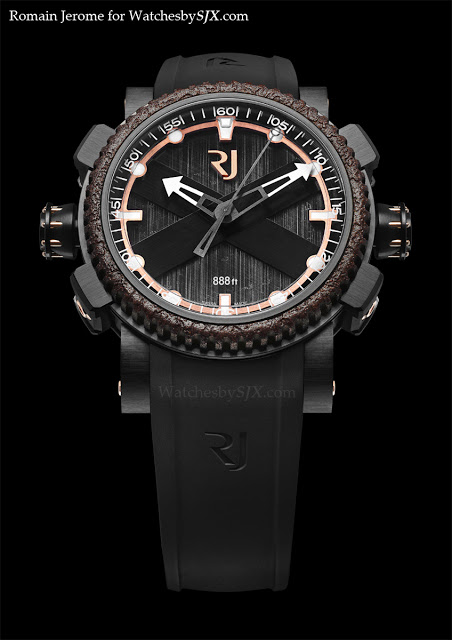 Romain Jerome has a somewhat chequered reputation thanks to its infamous Titanic DNA watches that are made from a steel alloy that contains steel from the wreck of the Titanic. The origin idea was from Yvan Arpa, who has gone on to similar exploits at ArtyA while dueling with his previous employer.

That being said, Romain Jerome makes some serious timepieces, including a Titanic version of the Cabestan Vertical Winch Tourbillon, and also some attractive watches, like the new Octopus diver’s watch.

Housed in a 46 mm case that is water-resistant to 888 ft (or 270 m), the Octopus has a rusted Titanic steel bezel and twin crowns. The crown at three o’clock is to set the time, while the other turns the inner dive bezel.

The sides of the case have the distinctive struts of the Titanic DNA collection, and over on the back there is an octopus logo in relief. Pirates of the Caribbean anyone?

Despite the dubious Titanic concept, the watches from Romain Jerome are well made, with detailed and attractive cases especially. This one looks no different.