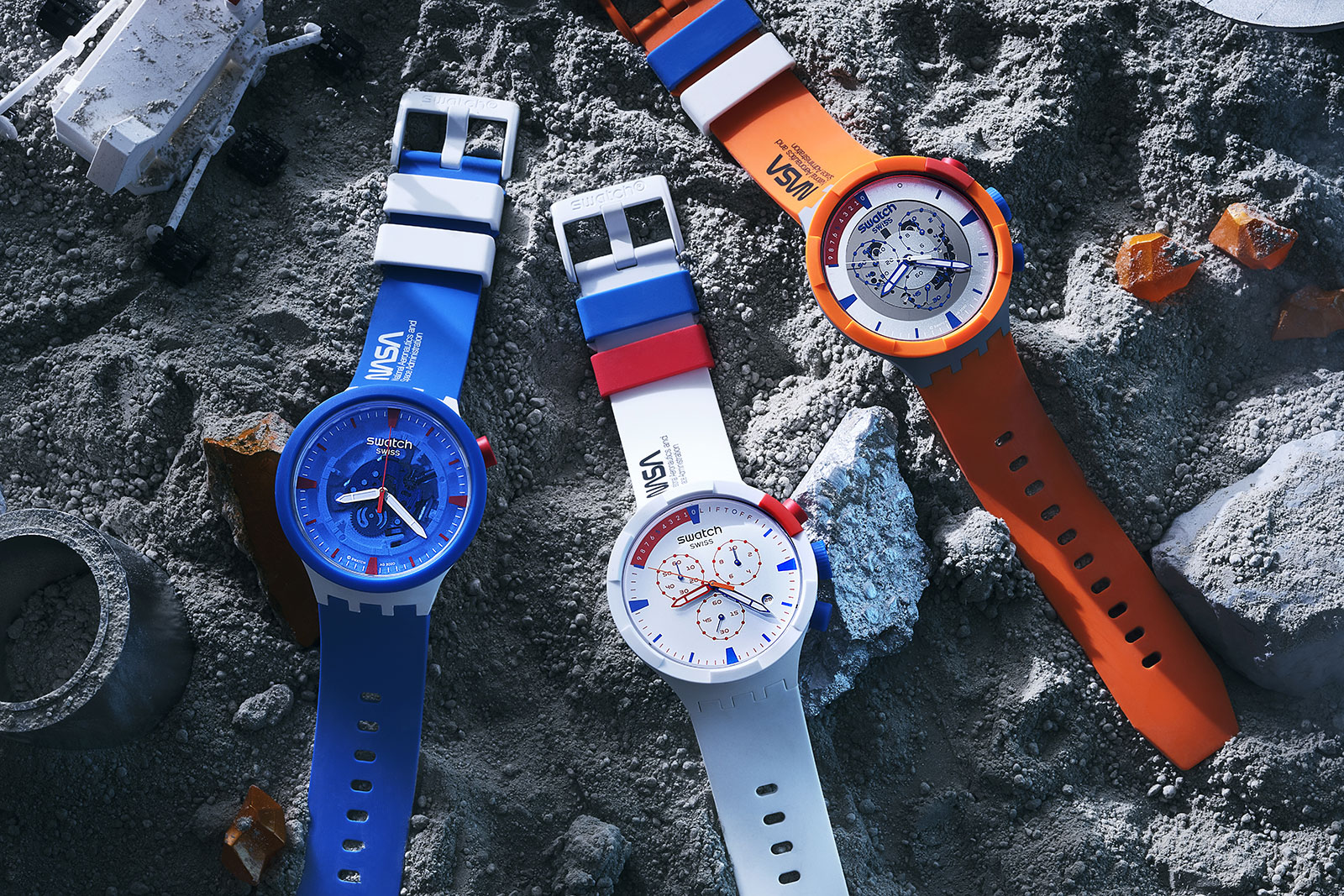 Shortly after launching the Earth-friendly Big Bold Bioceramic made of plant-based plastic, Swatch is venturing off the planet and towards the stars with the Space Collection.

A line of five watches conceived in collaboration with American space agency NASA, the Space Collection is inspired by NASA’s colours and spacesuits. It is made up of a trio of extra-large Big Bold watches with Bioceramic cases, along with a pair of more classical Gent models in regular plastic. 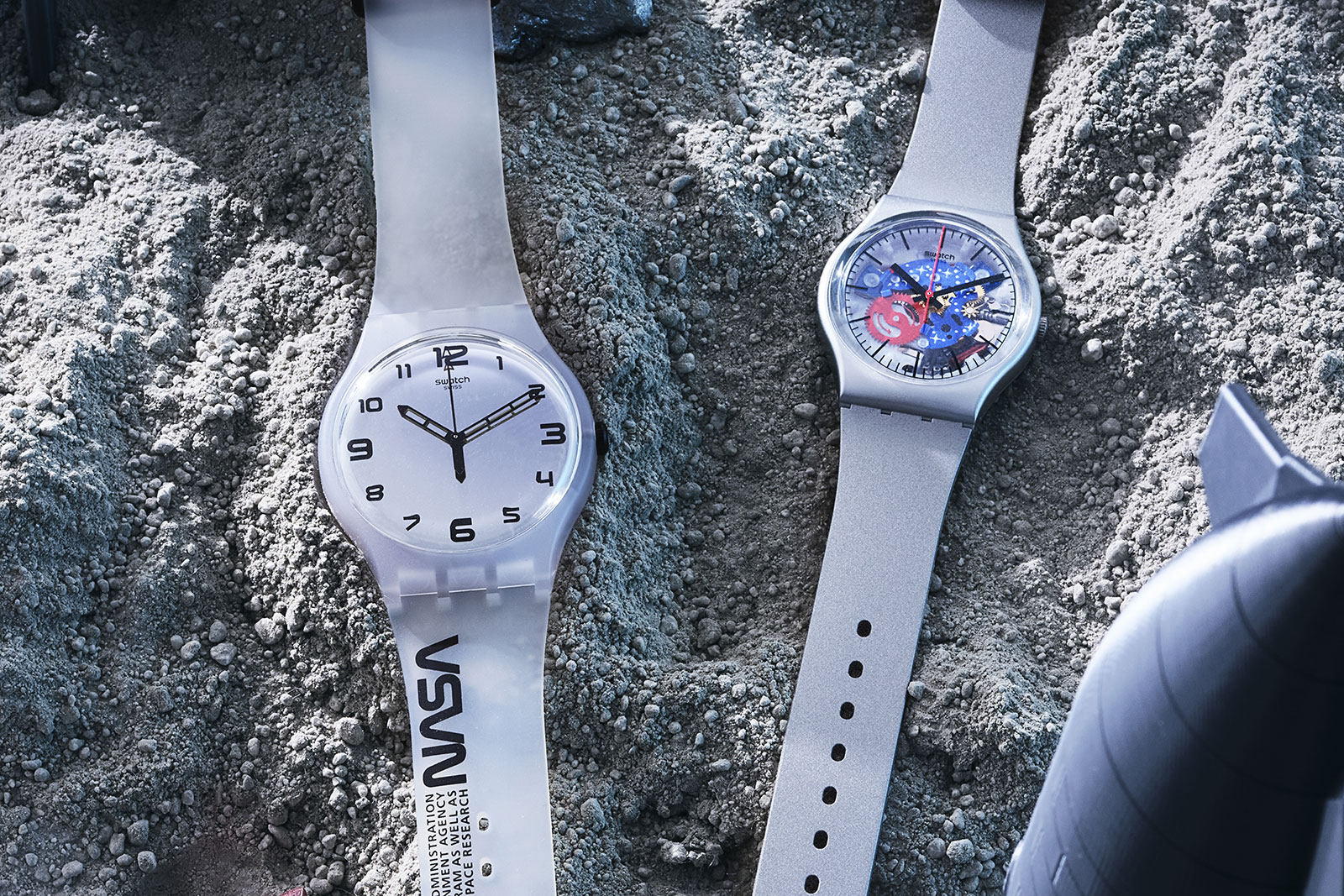 Old school Swatch: Space Race (left) and Take Me to the Moon.

I’m a big fan of Swatch and own several, including the MoMA “Starry Night” launched last month. The brand is often neglected by enthusiasts because of its fun and low-cost watches, despite Swatch having played a pivotal role in keeping Swiss watchmaking going during the Quartz Crisis. In fact, Swatch was crucial enough that its parent company renamed itself Swatch Group, despite owning brands like Omega and Breguet.

It comes as no surprise that I like the new Space Collection, especially the Big Bold models. The Space Collection represents Swatch doing what it does best – offering fun, interesting timepieces at an accessible price point. In fact, the Space Collection models are likely the most affordable NASA-endorsed watches on the market. To put things in perspective, even the top-of-the-line Big Bold Chrono is cheaper than Omega’s NASA velcro straps.

Starting at US$125 for the time-only version – the line up includes chronographs – the Big Bold is the most affordable Swiss-made watch with a ceramic case. And the appeal is boosted by the fact that the Space Collection watches are priced identically to the standard models. 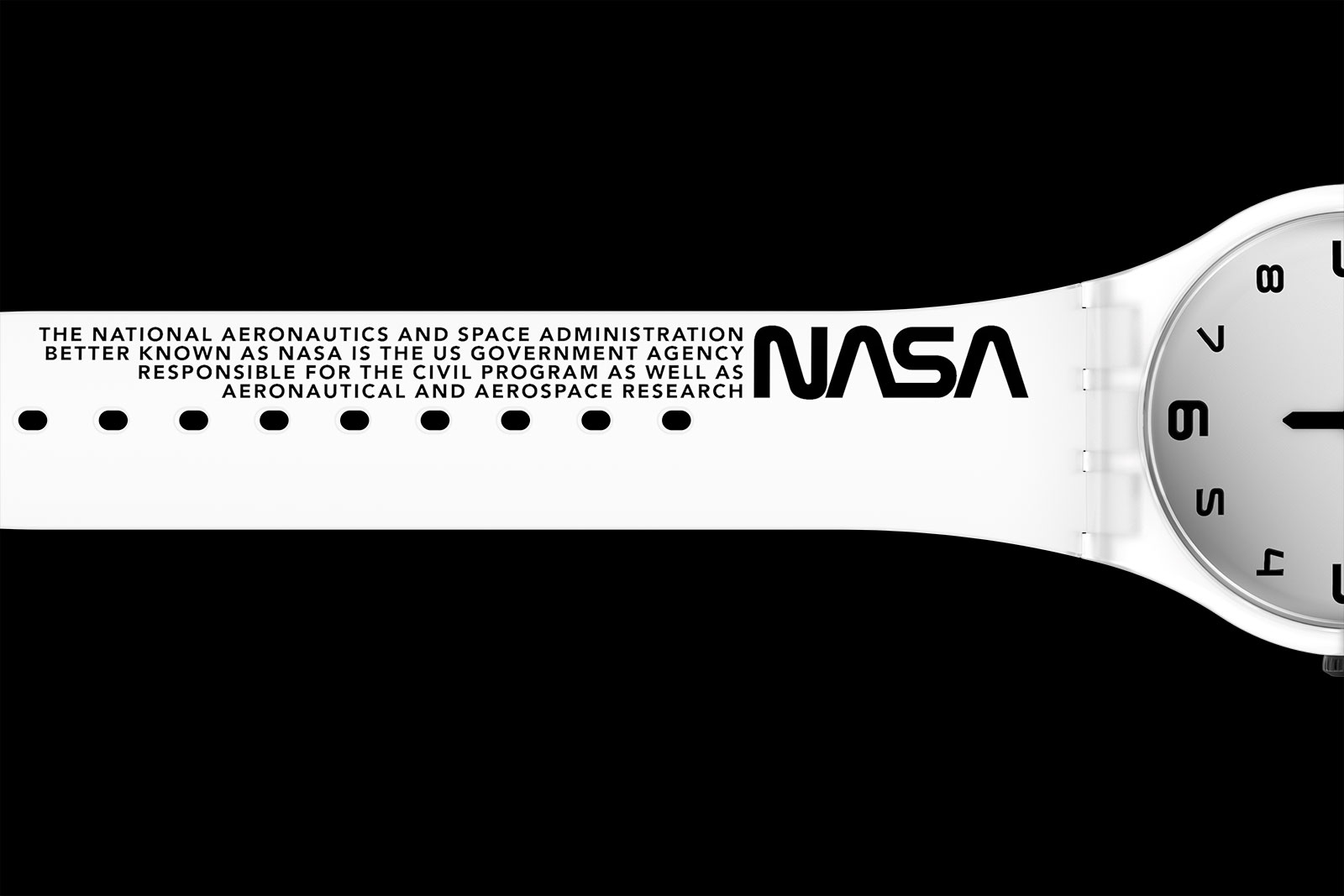 My choice would be the time-only Big Bold Jumpsuit that’s modelled on the blue outfits astronauts wear for office work. With a minimalist look and a translucent dial that exposes the movement, the Big Bold Jumpsuit feels quintessentially Swatch.

Although the Big Bold is 47 mm, it are surprisingly ergonomic due to its lug-less design. The lug-to-lug span is only 44.8 mm, a measurement usually associated with watches having a diameter of around 36 mm.

Space on the wrist Interestingly, the central seconds hand of the Big Bold Chrono resets to ten seconds before the usual 12 o’clock position. This is a nod to the final countdown before a lift-off. It’s a subtle and quirky homage to space exploration, so kudos to Swatch for being creative. For those seeking something more conventional, the Space Collection includes a pair of Gent models, the classical Swatch wristwatch that dates to the brand’s founding.

Both more discreet in design than the Big Bold models – the smaller Gent Take Me to the Moon has a see-through case, and while the large New Gent Space Race has a silvered, mirror-like dial. The watches are 34 mm and 41 mm respectively, and feature NASA branding on the straps. 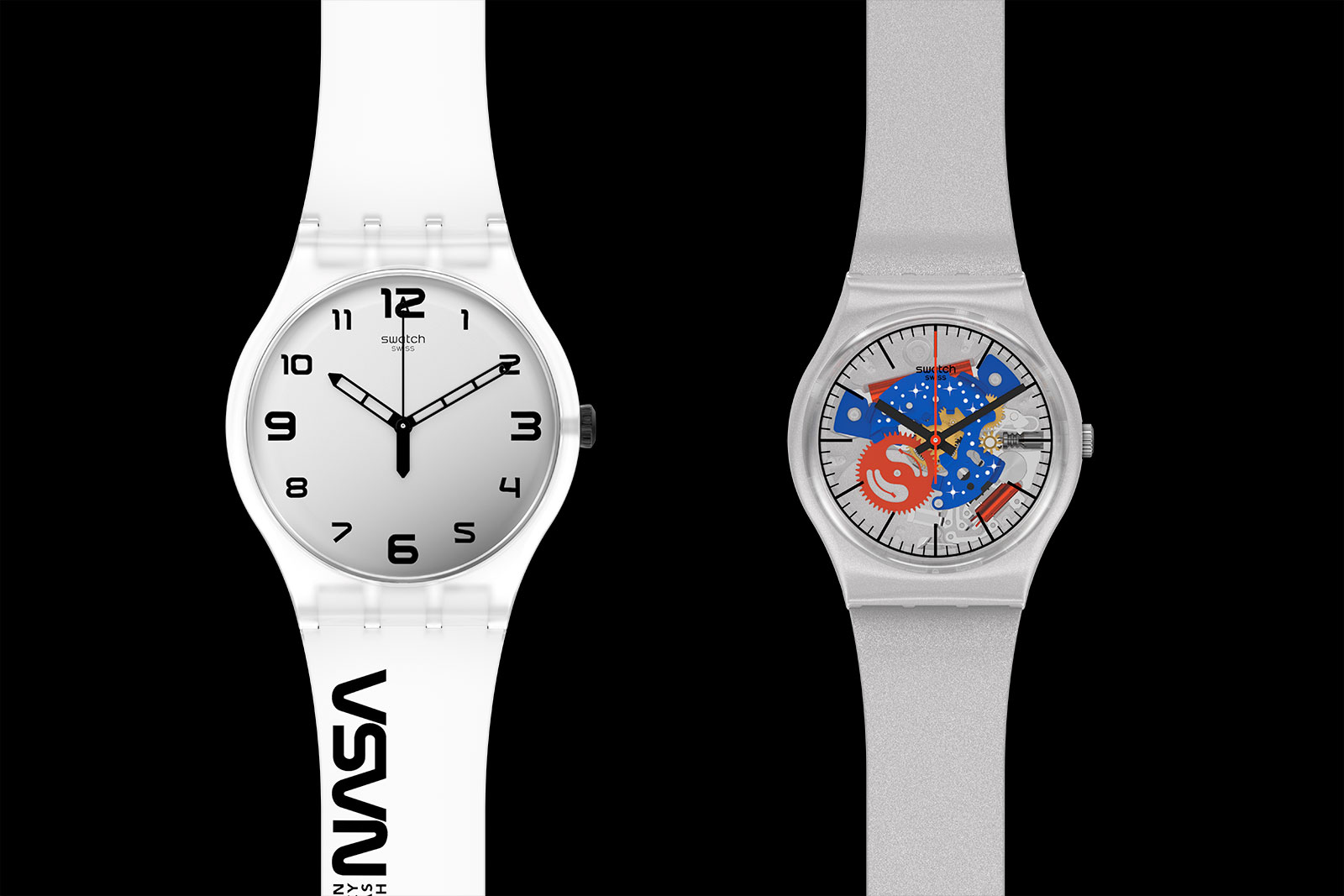 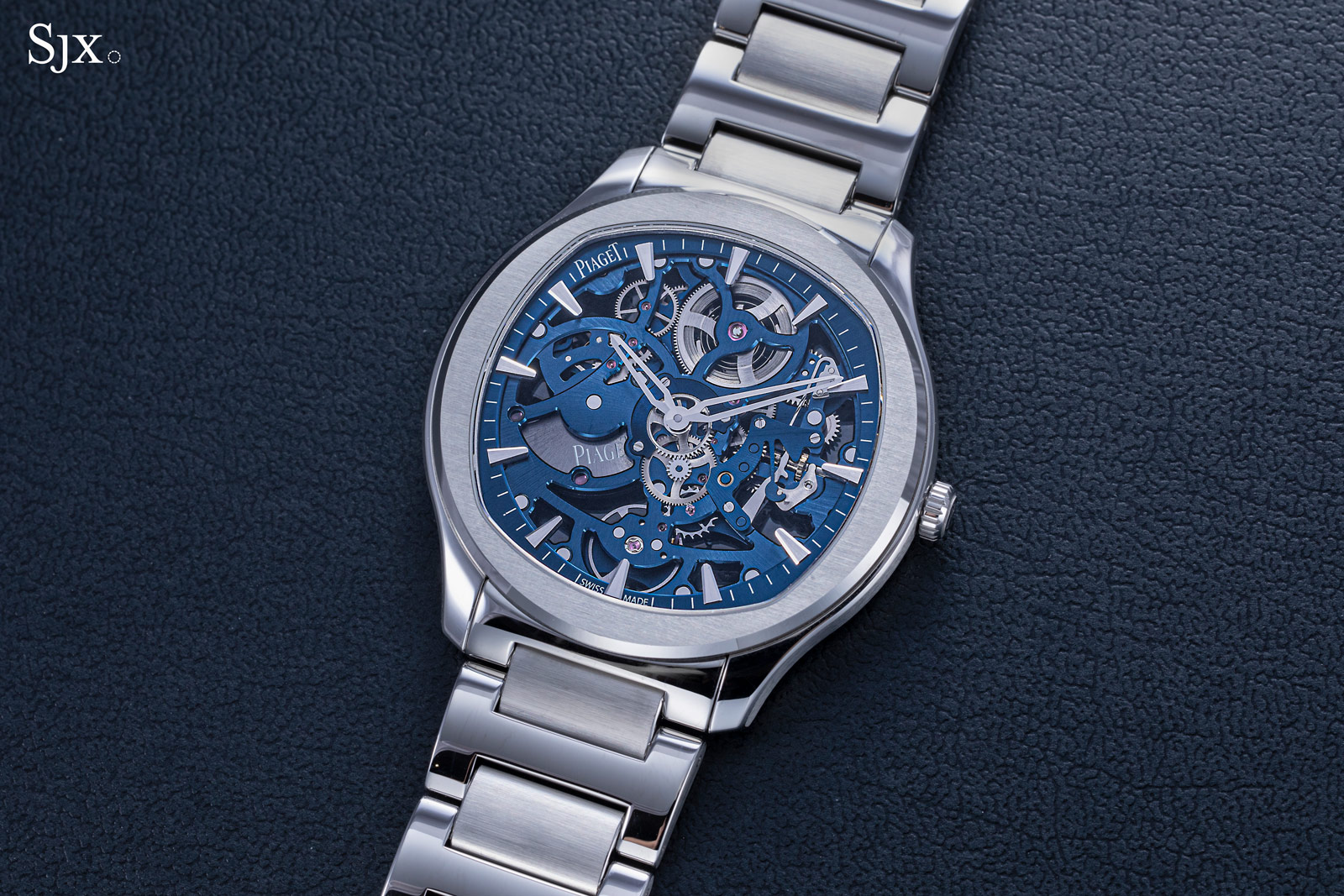 Launched earlier this year as the latest addition to Piaget’s compact Polo S line up, the Piaget Polo Skeleton joins a crowded field of luxury-sports watches. But it is a novel enough proposition – being a skeletonised, automatic sports watch – to make it notable. And it helps that the Polo Skeleton is exceptionally slim, thin enough that it feels similar to Piaget’s Altiplano dress watches on the wrist.

Piaget loaned me a Polo Skeleton in blue for a couple of days, and two features stood out: its slimness and how well it wore (save for the clasp buttons, more on that below).

The Polo Skeleton is wide but flat, and sits elegantly on the wrist. Even though the bracelet is relatively thick compared to the case, that is only apparently when the watch is off the wrist. On the wrist the bracelet pairs well with the case, despite not being an integrated design. 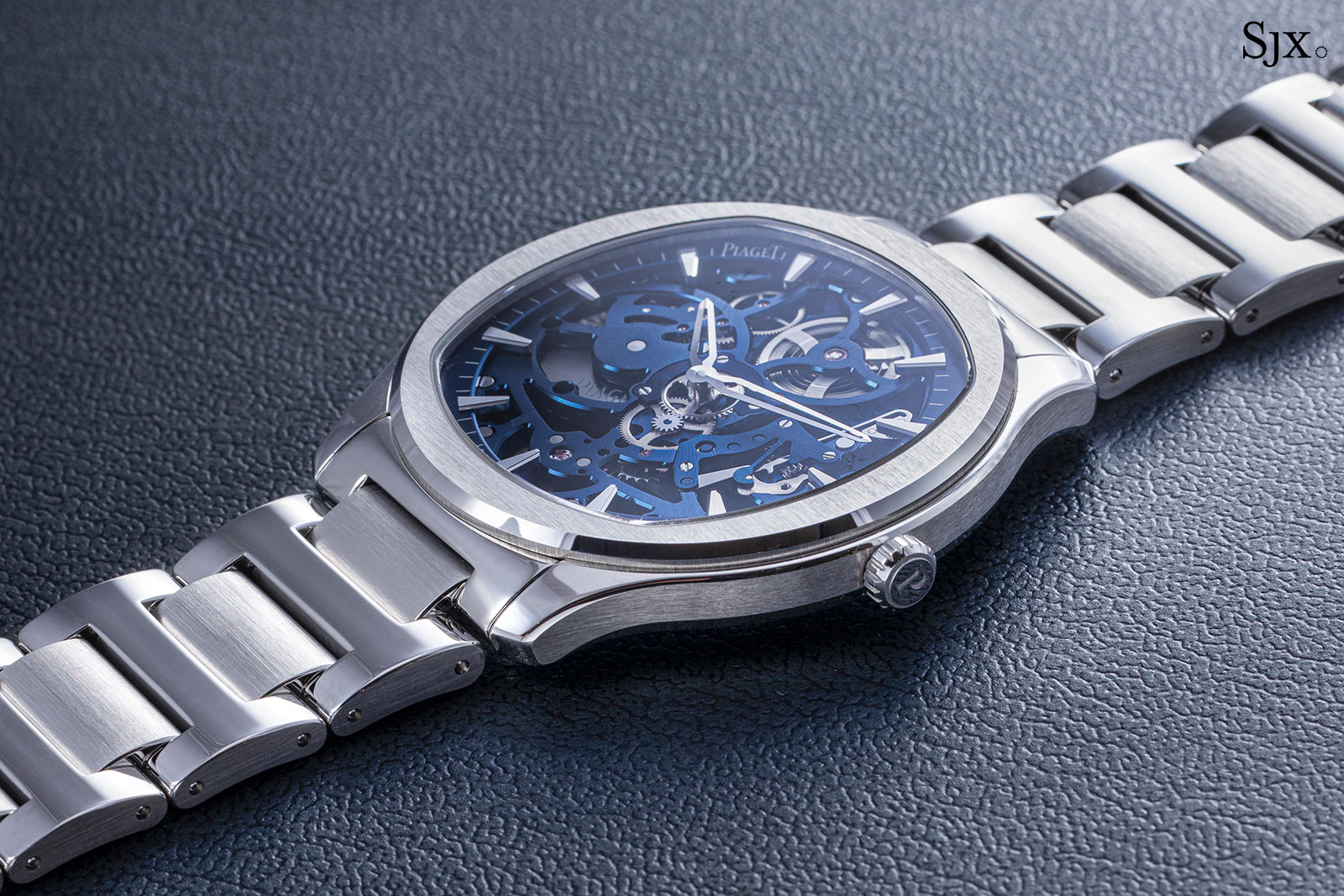 Having a skeletonised movement with coloured bridges give the Polo Skeleton a distinct look. This contrasts with the standard time-only Polo S, especially with its linear-pattern dial, that does admittedly bring to mind other luxury-sports watches.

At the same time, the finishing and style of the cal. 1200S in the Polo Skeleton bring depth and texture to the face, while also injecting a bit of movement with the rotor and balance wheel.

The Polo Skeleton is offered in two guises – blue or grey treatment for the movement – and the blue is the more striking by far. It is also more legible due to the contrast between the hands and movement. 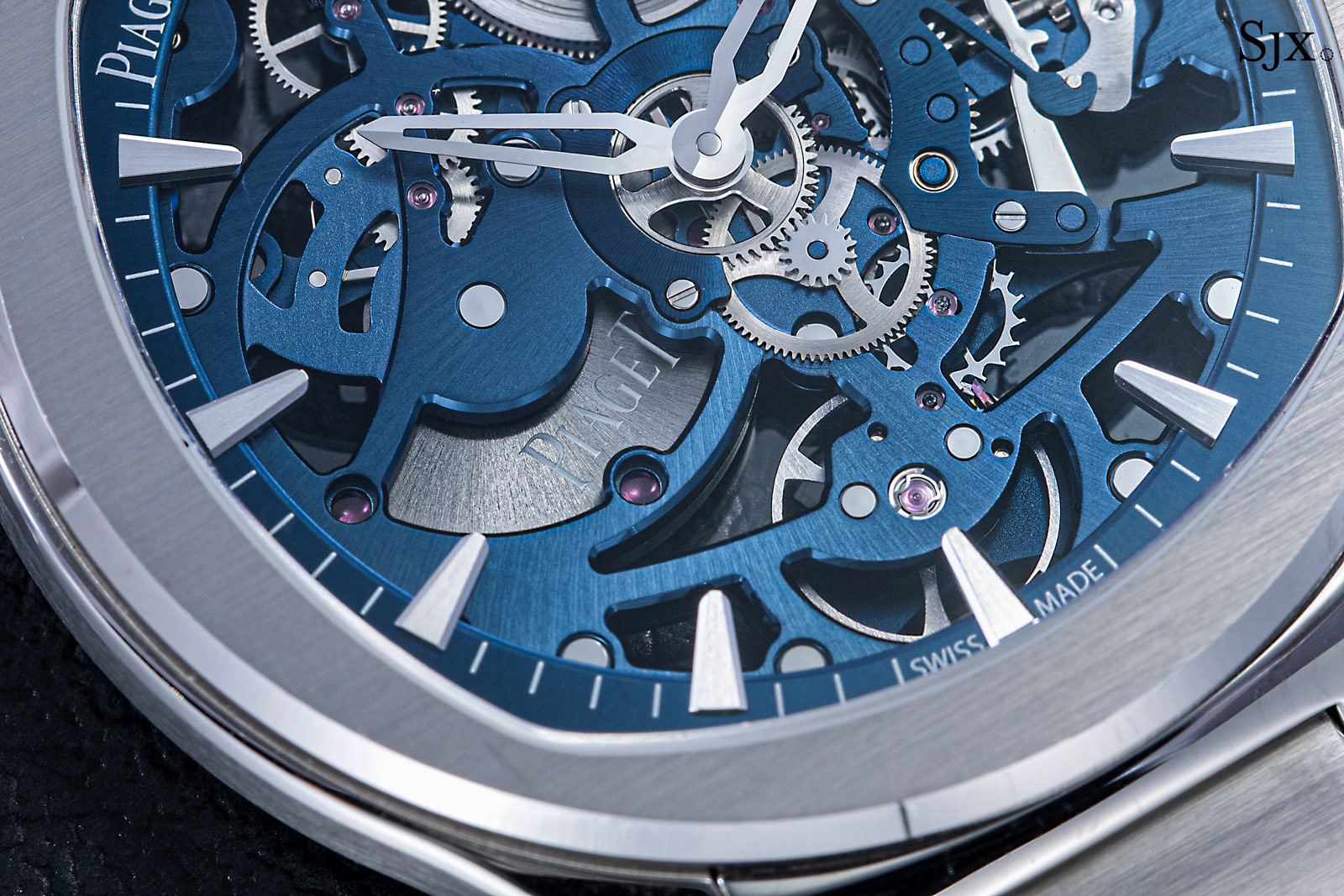 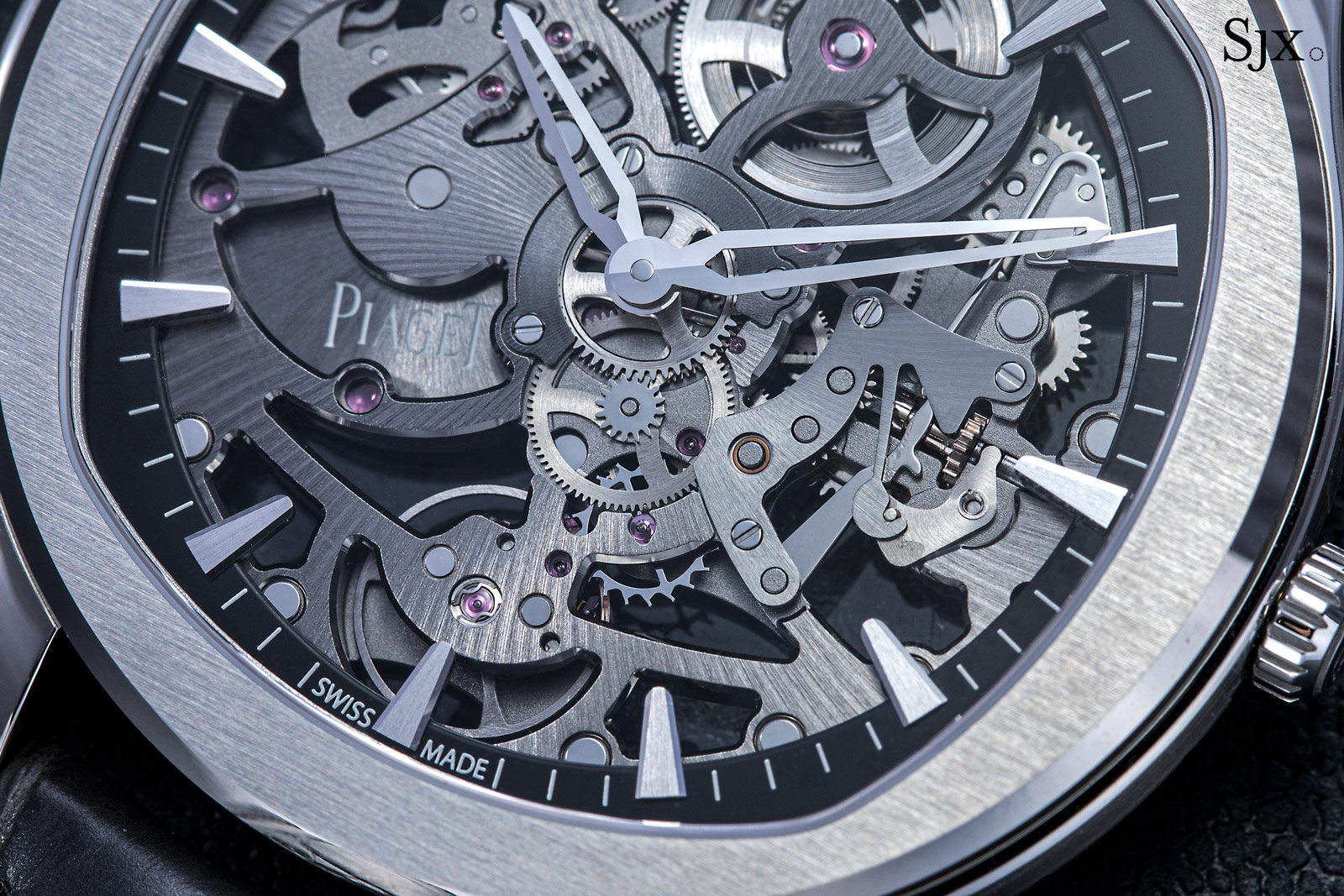 Similarly, between the choice of strap or bracelet, the bracelet is the easy choice, especially since the strap sits a distance from the case, leaving a space that’s uncomfortably wide.

While the bracelet looks and feels good on the wrist, it does have one minor niggle: the twin buttons for the double-fold clasp. They stick out a bit too much, while also having angular corners; shorter, round-tipped buttons would work just as well, so it seems like a simple fix. 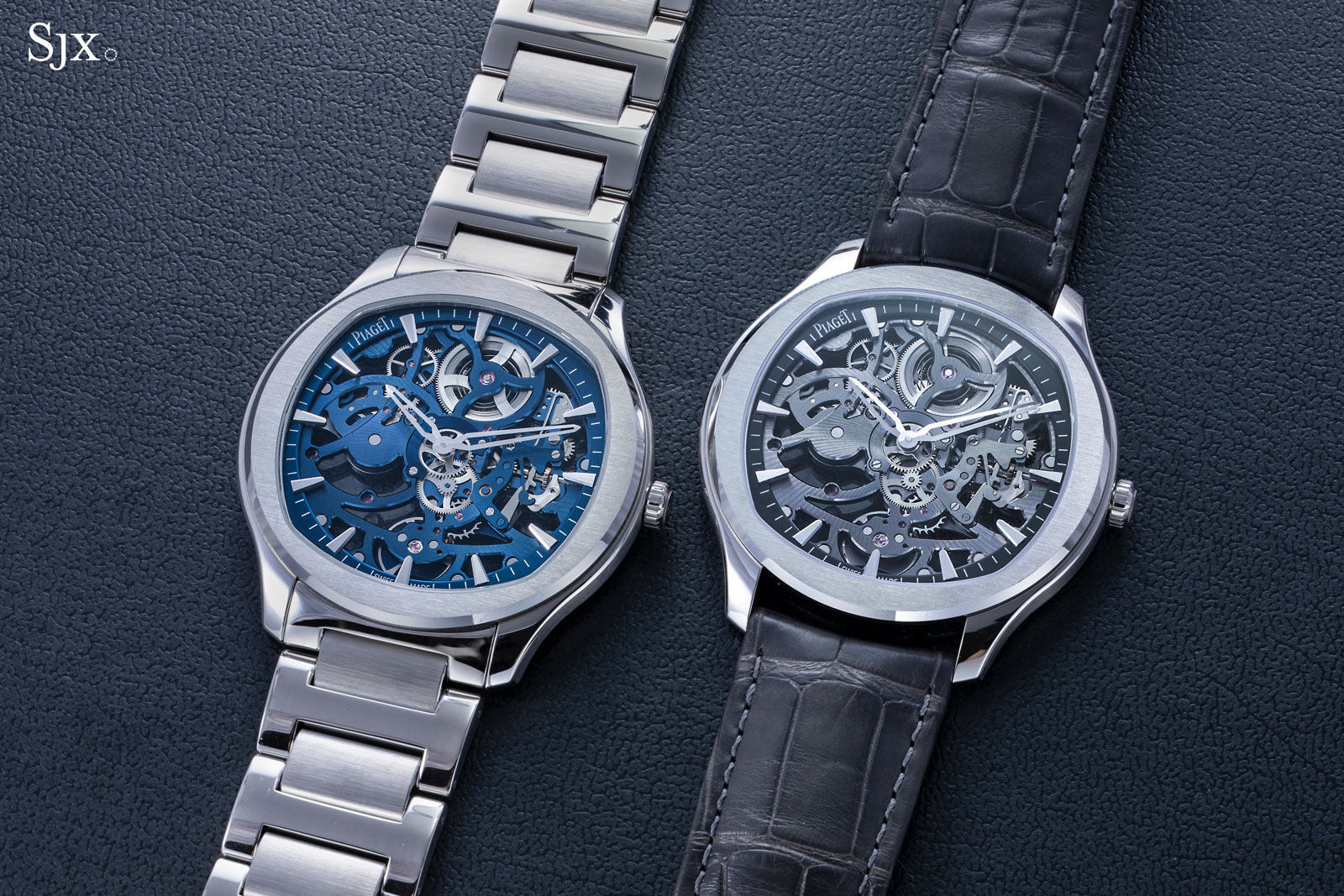 The 30 m water-resistance rating of the Polo Skeleton is meagre. With swimming not recommended for a 30 m depth rating, it leaves the Polo Skeleton more of a sporty, rather than sports, watch. A screw-down crown and 50 m rating would have been a major step forward. That said the 30 m rating is identical to that of its closest competition, the Bulgari Octo Finissimo Skeleton.

On the topic of the competition, the Polo Skeleton stands up to scrutiny. The Octo Finissimo Skeleton is priced almost same, and offers comparable quality, albeit with differences in specs (namely the Piaget is automatic while the Bulgari is hand-wind). The Bulgari is certainly better known, doubtless due in part to the association with Gerald Genta, but the Polo Skeleton holds it own.

Loosely inspired by the original Piaget Polo of 1979 that was typical of 1980s style, the Polo S is cleaner, contemporary design that made its debut in more affordable formats in 2016.

Though the Polo S doesn’t have the same retro extravagance as the 1980s Polo, the case and dial make clear that it’s a high-end sports watch. While the earlier versions of the Polo S did seem a little derivative in terms of design, the Polo Skeleton manages to be its own watch, mainly because of the unusual combination of the ovoid bezel and skeleton movement.

Importantly, the bezel is relatively narrow, unlike the standard Polo S that has a wide bezel. The slender bezel maximises the aesthetics of the skeletonised movement, while also helping to eliminate the similarity to other designs. 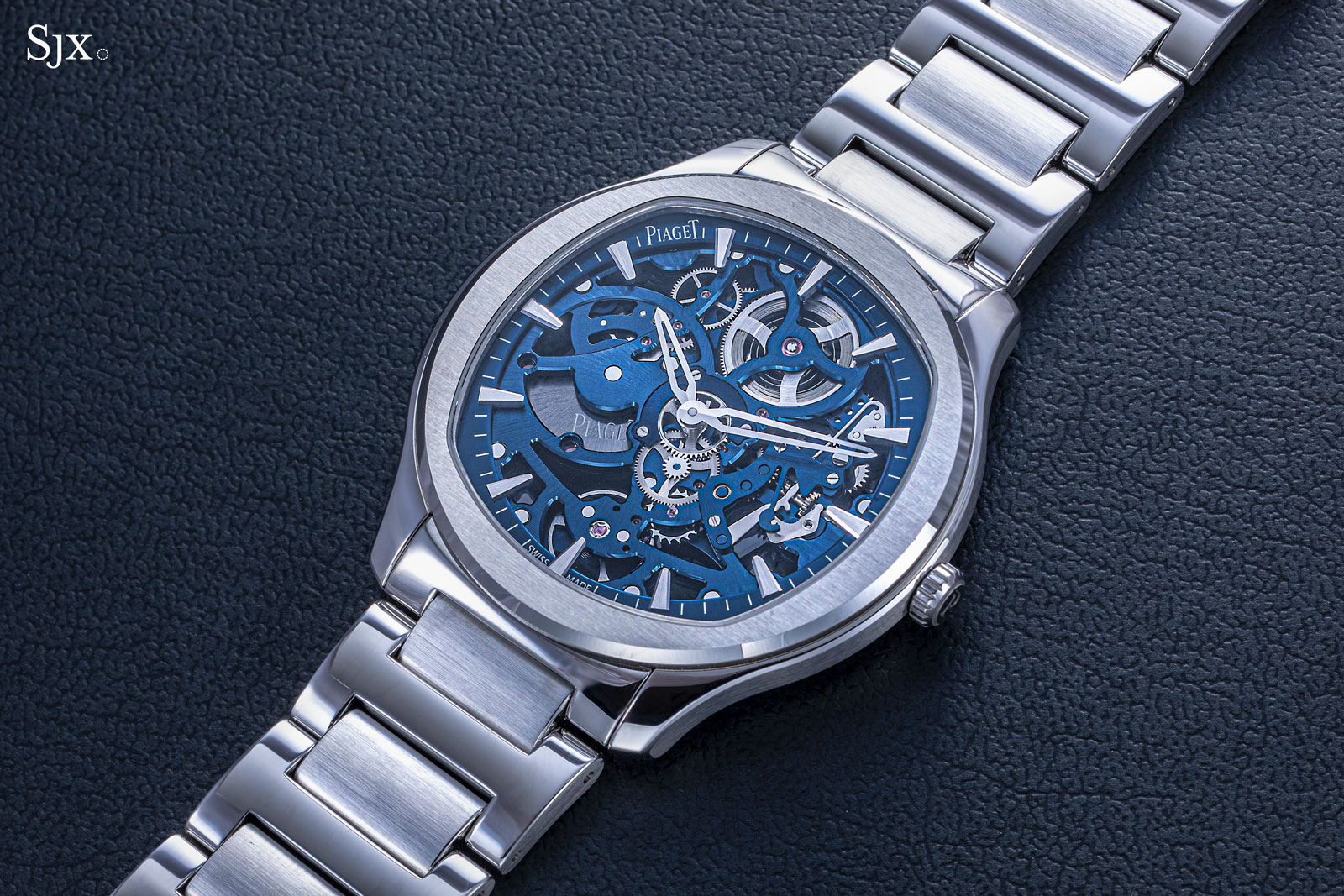 Though it immediately apparent, the Polo Skeleton is a sleek watch. It’s relatively wide at 42 mm in diameter, but just 6.5 mm high (making it just a hair higher than the 6.4 mm Bulgari Octo Finissimo), which gives it an unexpectedly flat profile on the wrist. The relatively narrow case band with its bevelled lower edge further accentuate the slimness.

The crown is small to match the case, but it’s still easily usable. But it is not screw-down, which is perhaps one of the factors behind the skimpy 30 m depth rating, though that’s probably down to the overall, ultra-thin case construction. Unlike most recent luxury-sports watches, the Polo Skeleton does not have an integrated bracelet. The clean style of the bracelet is a good match for the case design, and the pair do go well together.

The bracelet is comfortable, save for the sharp ends on the buttons to release the clasp. They aren’t usually felt while wearing the watch, but can occasionally press into the wrist. The bracelet incorporates a simple quick-release mechanism, with a pair of tabs that retract the tips of the spring bar, allowing for easy removal. The bracelet can be replaced with the alligator strap that’s delivered with each watch, or an aftermarket strap that fits. This contrasts with proprietary quick-release mechanisms, which make proprietary straps a necessity.

Despite the useful quick-release mechanism, the Polo Skeleton doesn’t look quite right on a strap. It lacks visual oomph on a strap, while also looking quite awkward because the strap sits far from the case, leaving a conspicuous gap between the case and strap. Although the Polo Skeleton is drastically different from its dress-watch cousin, both are powered by the same cal. 1200S. The movement was originally developed for the Altiplano Ultra-Thin Skeleton, and has been transplanted into the Polo Skeleton with changes save for the colour.

Even though the movement is the same – the bridges and base plate are identical – the resemblance between the two models is not evident. In fact, I never realised it until I looked it up, although once you see it the similarity cannot be unseen. Both the hands and pointed hour markers that extend onto the base plate make the Polo Skeleton distinct, contributing to its sporty, modern look. Because it’s a skeleton, the dial is busy, but legibility is good – on the blue version – due to the contrasting colours as well as size of the markers and hands. It’s less good on the grey model, because there’s far less contrast between the hands and movement. The movement has been open-worked in a geometric manner that is the prevailing style for skeleton watches today. As a result, the bridges are made up of clean, flowing lines, and finished cleanly with radial graining on the top. It’s not elaborate as earlier generations of skeleton watches were, but it works well with a sports watch.

With the base plate open worked, the mechanics of the movement are entirely visible. The mainspring is visible just under 12 o’clock, with the automatic-winding wheels to its left leading downwards to the micro rotor.

Notably, the underside of the micro rotor, which means the side facing the wearer on the wrist, features the Piaget logo, which swings in and out of view with the rotor. It would have been a clever, discreet placement of the logo, were it not for the unnecessary “Piaget” in between 10 and 11 o’clock that should have been left out. The view from the rear echoes the style of the dial, giving the movement a cohesive design front and back. The most prominent features here are the rotor and the wheels that allow for hand-winding of the mainspring, along with the balance wheel at six o’clock. Like many modern movements, the balance wheel is relatively small to maximise the power reserve of the watch. It’s the only significant shortcoming of the movement I can discern, though not for its size.

While unattractive, the Etachron regulator is popular amongst brands owned by Richemont, perhaps because of its simplicity and cost. It is also found in in-house movements from Cartier and IWC, amongst others, perhaps a consequence of the shared movement development efforts of the group. In terms of decoration, the cal. 1200S is comparable to most other calibres in this price segment. Moser movements are finished similarly, as are some Audemars Piguet calibres – though AP does the same thing to a higher level, but at a higher price.

The movement is finished extensively and neatly, which means nearly all parts are sharply decorated, but the decoration is largely done by machine. That explains the sharply cut bevelling on the bridges that show faint machining marks up close. Addition June 3, 2021: Included thoughts on the depth rating that were omitted before.

Priced under US$10,000, the Polo S is Piaget's salvo in the accessible-luxury price segment that's all the rage now.