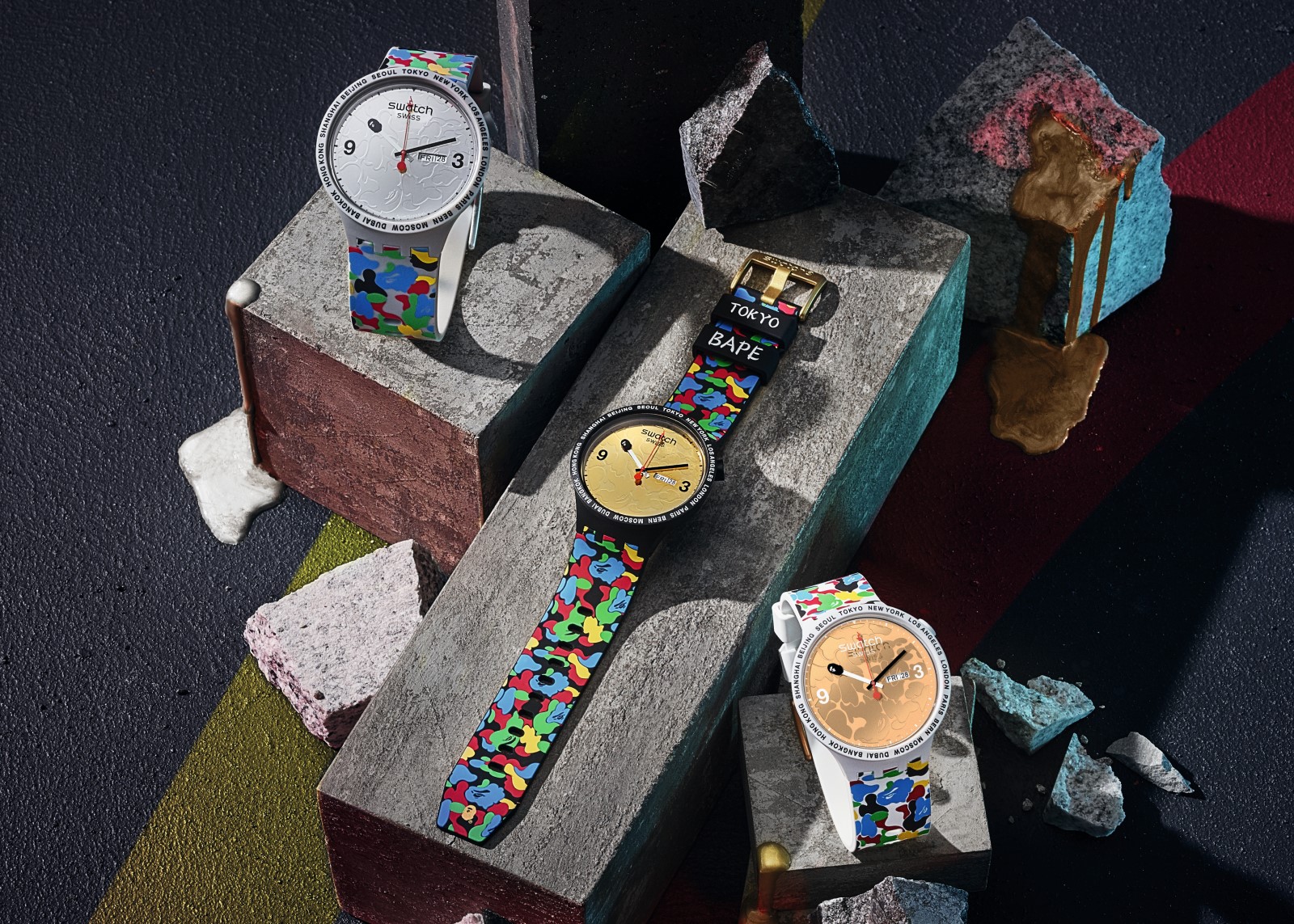 One year after the launch of its first collaboration with Japanese streetwear label A Bathing Ape (BAPE), Swatch has just announced the second edition of the Swatch x BAPE Big Bold. A limited edition of unknown quantity, the new line up is made up of three models, plus a more exclusive box set that Swatch has teased about but not yet announced. 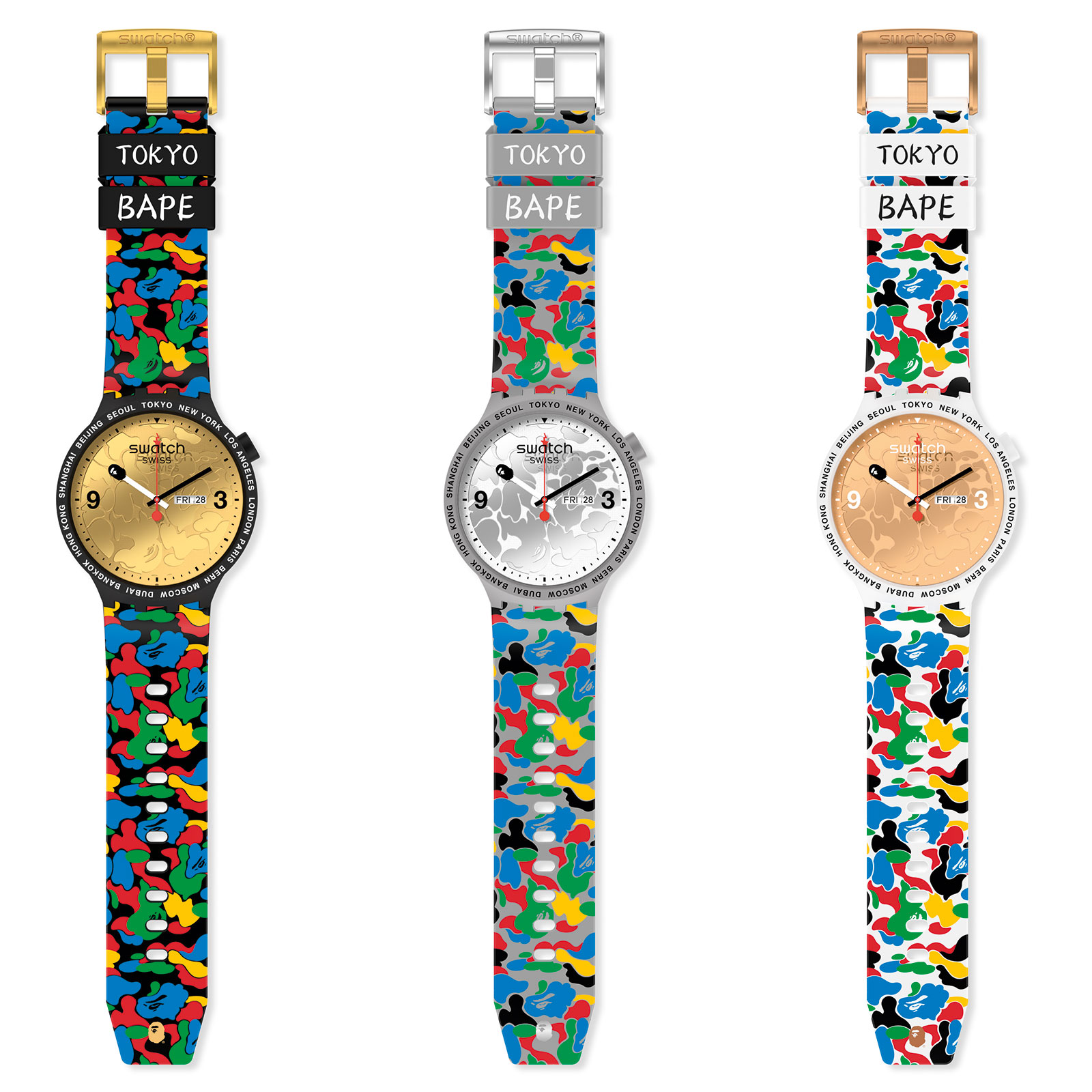 The first Swatch x BAPE edition was made up of six watches, each dedicated to a different city, along with a sixth “global” model – resulting in six truly distinct designs, making the whole set desirable.

On the other hand, the new edition pays homage to Tokyo, the birthplace of BAPE, and all three watches have the same design, namely a stamped camouflage pattern on the dial, making it arguably less interesting as a trio. The monochromatic dials accentuate the large 47 mm diameter, which is further emphasised by the copious negative space in the lower half of the dial.

Though not as daring in terms of design as the first edition, the new Swatch x BAPE collection will probably be well received thanks to its affordability and fun styling. 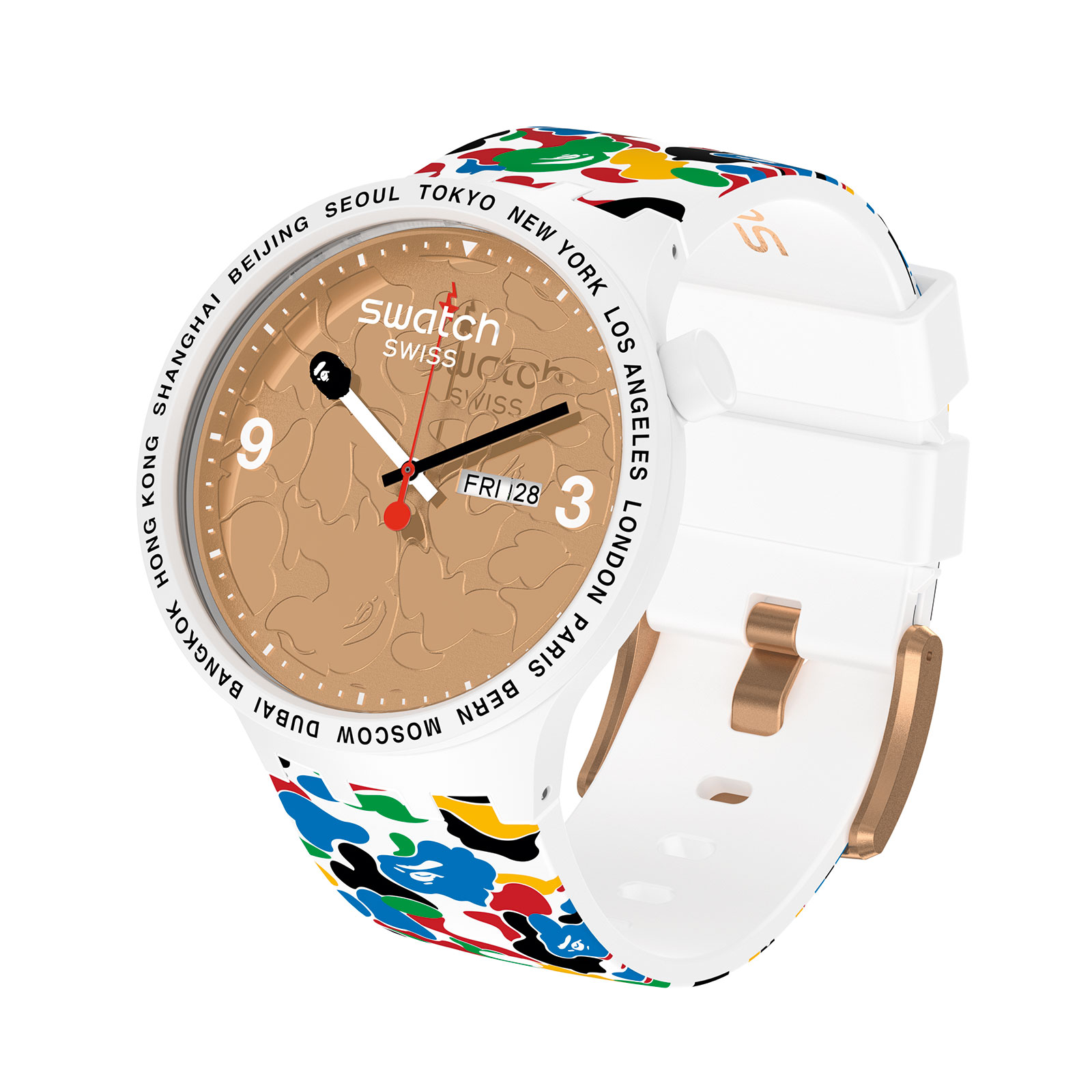 The new Swatch x BAPE watches are identical, except for the colours of the case and dial. The case is 47 mm and matte plastic, with the crown at two o’clock and an integrated silicon strap. The trademark BAPE camouflage theme continues on the strap, which has a pin buckle in the colour of the dial. 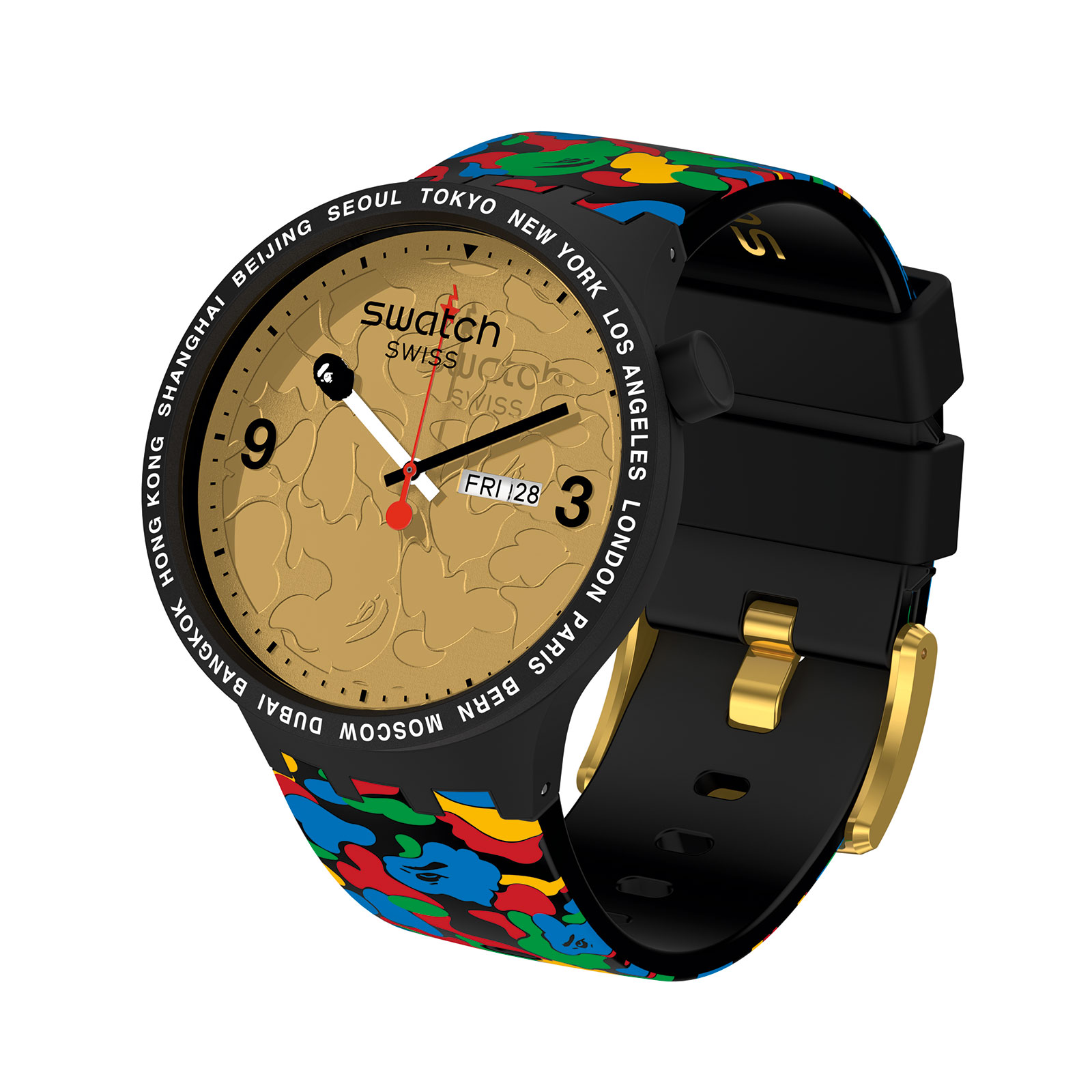 Framing the dial is a bezel inscribed with the names of 13 cities where both Swatch and BAPE have stores. The dials are available in metallic silver, yellow gold, or copper, all featuring a stamped camouflage motif rendered in polished recesses contrasting against frosted relief. BAPE elements in the design include the ape’s head hour hand and hour numerals at nine and three, a nod to BAPE’s founding in 1993. 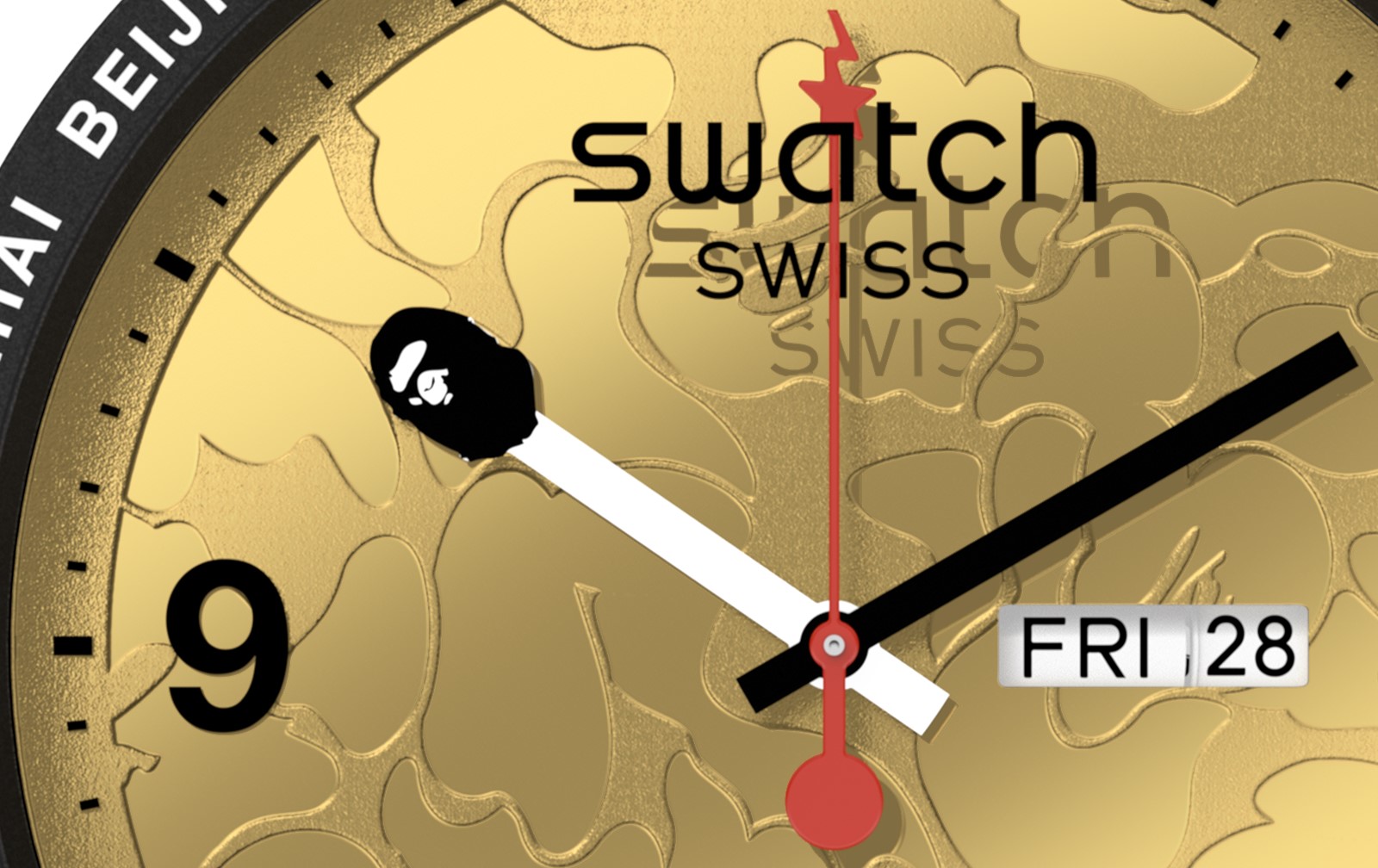 The hour hand is tipped with the BAPE logo, while the seconds hand is a lightning bolt

Limited edition: Limited but quantity unknown
Availability: To be announced
Price: US$150