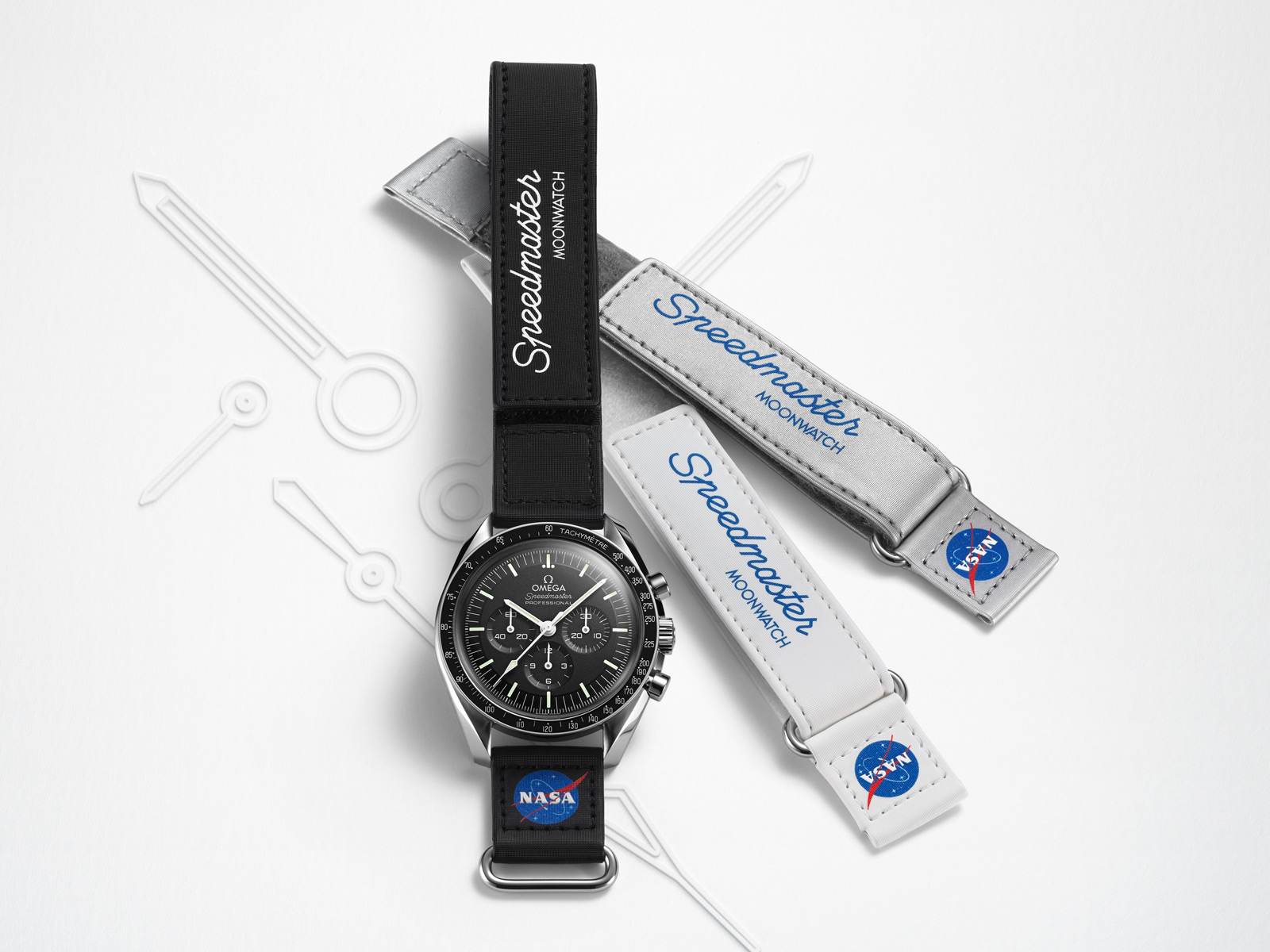 The Omega Speedmaster Professional is an icon for one reason: the three astronauts of Apollo 11 each worn one during the Moon landing of 1969. And five decades later, Speedmaster remains the only mechanical watch that’s part of NASA’s official kit for astronauts. After many Speedmaster limited editions marking its longstanding relationship with the American space agency, Omega now unveils a set of NASA Velcro straps for the Speedmaster Moonwatch.

From memorable advertisement starring George Clooney and Buzz Aldrin to the paraphernalia and accessories that accompany the multitude of Moonwatch iterations, Omega relentlessly reminds us about the provenance of the Moonwatch, and doubles down on the NASA association with the new straps. 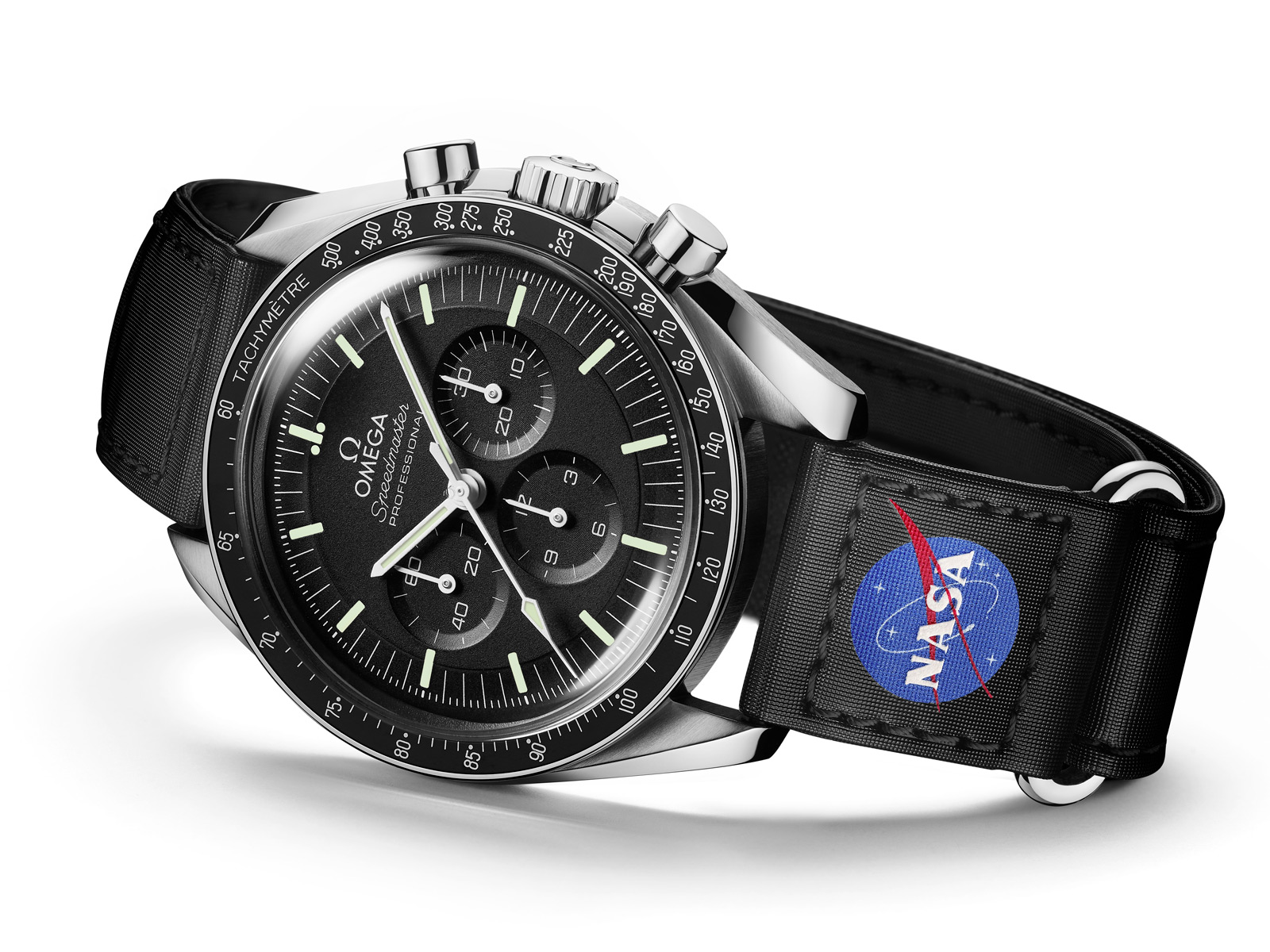 The NASA-themed straps are a first, but also a logical and expected extension of the Moonwatch franchise, especially since independent strap makers have offered similar aftermarket straps in the past. The new straps are cool and affordable, making them something of a perk for Speedmaster enthusiasts.

As an owner of a Moonwatch myself, I’m a fan of the new straps. Not only are they a nod to the history of the Speedmaster Professional, but they also inject a bit of fun into the no-nonsense Speedmaster design. And they also bring to mind the extra-long velcro straps that actual astronauts use in order to wear the Speedmaster on a space suit. Who doesn’t want to feel like an astronaut? 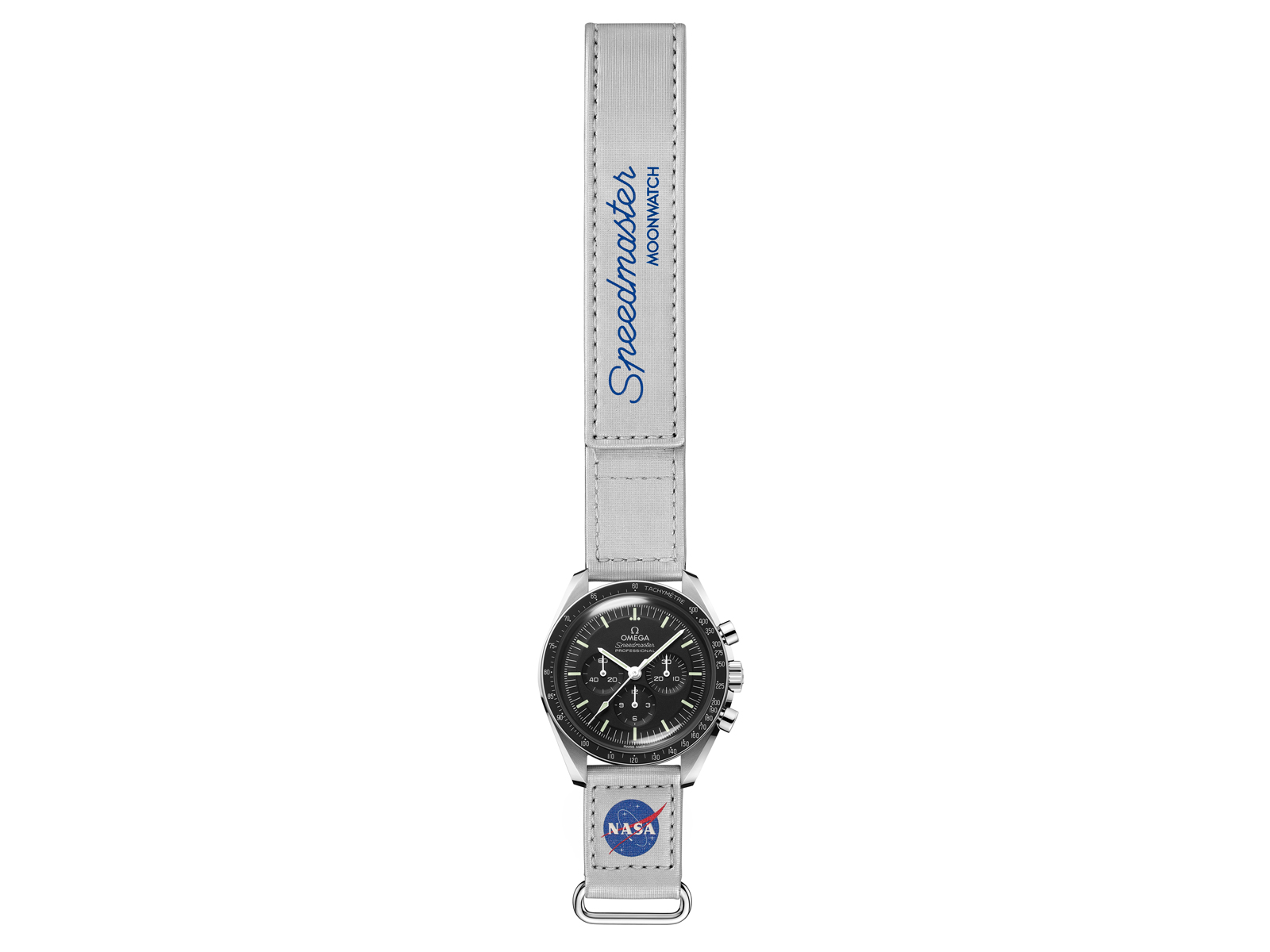 If Omega’s earlier velcro straps are anything to go by – past versions of Speedmaster Professional included a black velcro strap inspired by the astronaut-issue bands – the NASA-themed offerings will be comfortable. Priced about 10% more than the standard velcro straps, the new straps are a small step upwards in price, but a giant leap forward in terms of the fun factor. I’ll be buying one.

The NASA Velcro straps are offered in three colourways – black, white, and silver. The straps feature NASA’s iconic “Meatball” logo on the short end, and Speedmaster Moonwatch text on the long portion, along with matching colour stitching.

Of the three, the black strap is the most historically accurate, being reminiscent of the straps worn during the Moon landing, and best paired with the classic Speedmaster Moonwatch for a functional, stealthy look.

Meanwhile, the silver strap is a nod to the silvery, foil-likes space suits of the 1950s that were worn during the Mercury and then Gemini missions. I can imagine it working exceptionally well with either a vintage “pre-Moonwatch” Speedmaster with straight lugs, or the modern-day remake of the same, the “First Omega in Space” Speedmaster. 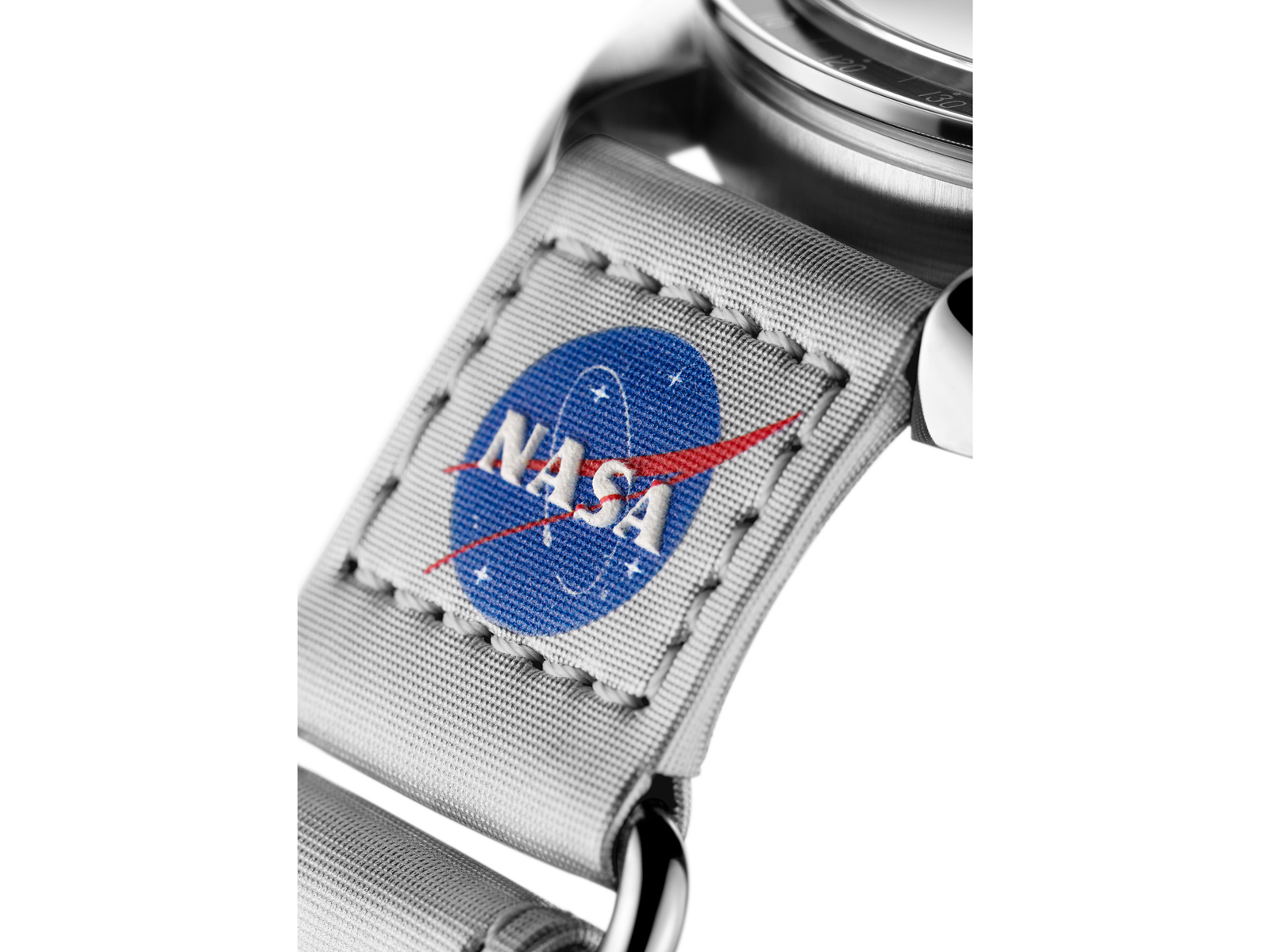 However, my personal favourite is the blue-on-white strap, colours synonymous with NASA and space. This pays tribute to both the white spacesuits worn by Apollo-era astronauts as well as Alaska Project, a joint initiative by Omega and NASA to develop a watch capable of withstanding extreme environments. 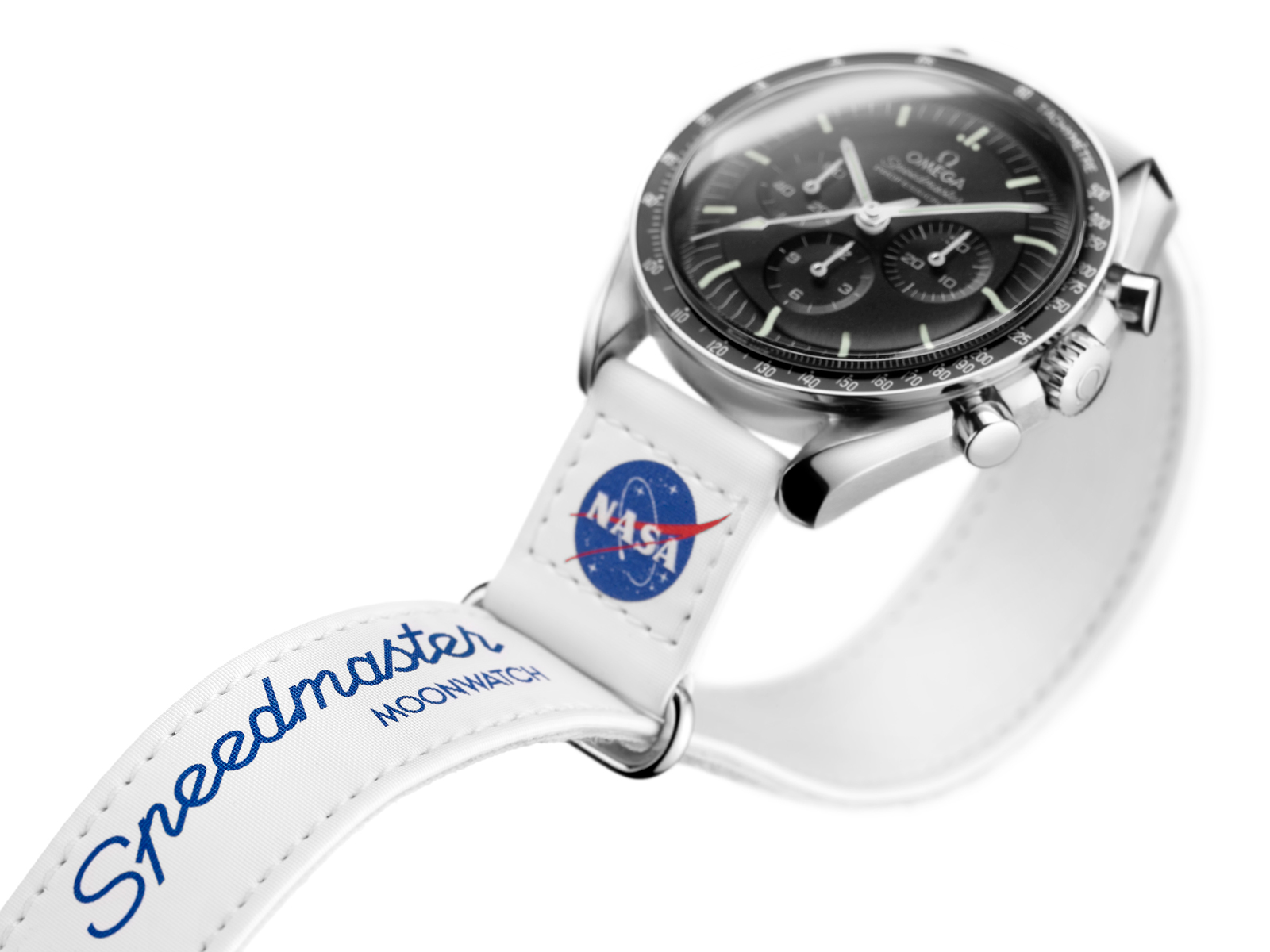 The white strap evokes spacesuits and is the most striking

Availability: At Omega boutiques
Price: US$190