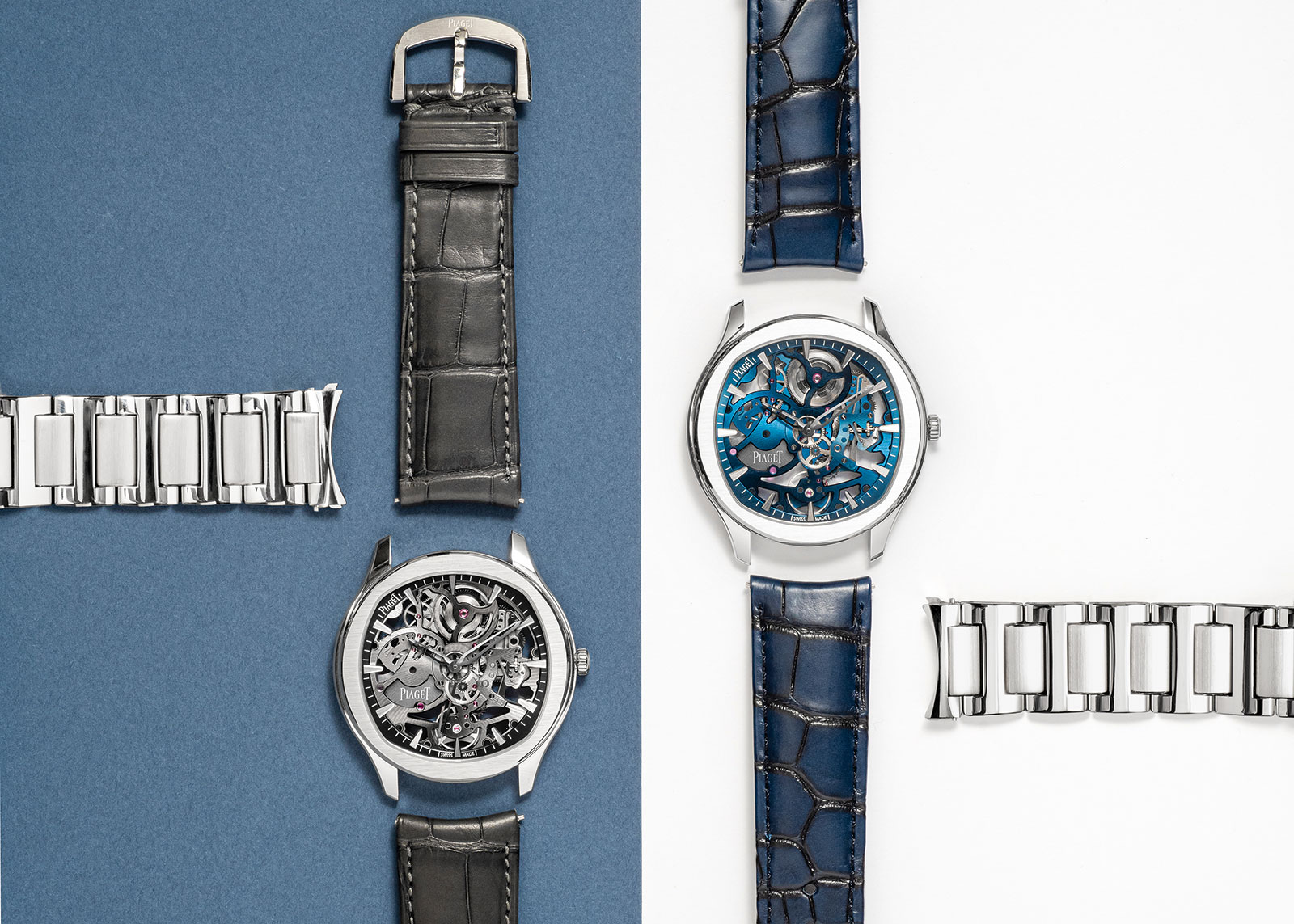 Long in Piaget’s catalogue – the original model was introduced in 1979 – the Polo underwent a significant redesign in 2016, transforming the charmingly 1970s original into the Polo S. Now the brand’s entry into the luxury-sports watch segment has received a major facelift with the Polo Skeleton, which boasts an open-worked movement that gives it a strikingly more distinctive aesthetic.

But more than just a new face, the Polo Skeleton is also a step up in terms of wearability and sleekness: the open-worked movement results in a thinner case – one that’s a substantial 3 mm slimmer. The result is a case with proportions rivalling those of the thinnest-ever luxury-sports watch made by a certain Italian jeweller. 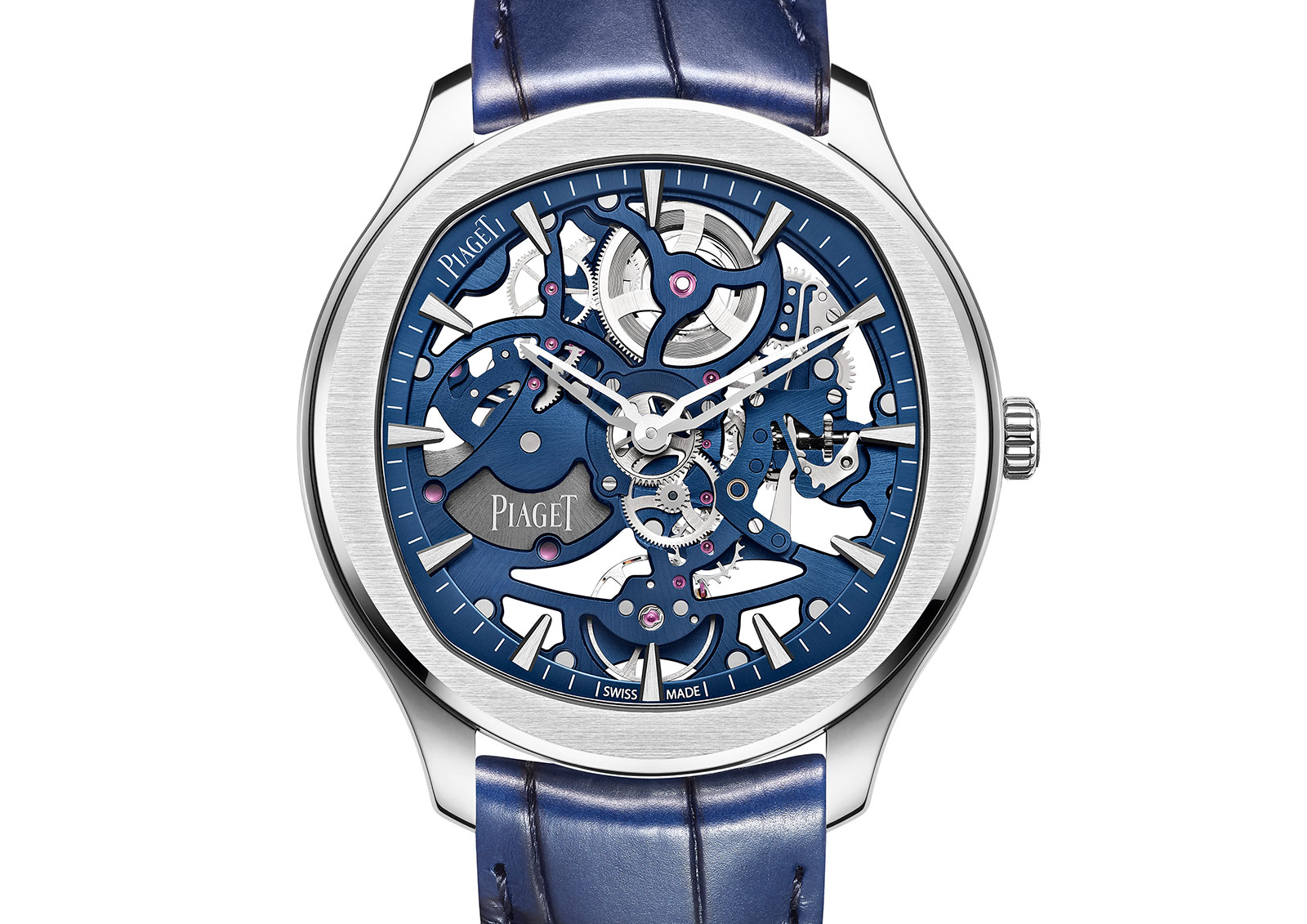 The revamp of the Polo five years ago stirred controversy, because the Polo S was a departure from the style of the vintage original, and a turn towards fashionable and predictable designs like the recently discontinued Nautilus. Still, the Polo S did combine strong quality with competitive pricing, explaining its subsequent commercial success.

The original controversy means the Polo Skeleton is a better idea. Besides being more original visually, it incorporates many of the brand’s technical strengths. Ultra-thin watches are Piaget’s forte – the brand boasts the thinnest mechanical watch ever – and the 1200S  skeleton movement reflects that, being extra-thin and extra-revealing. 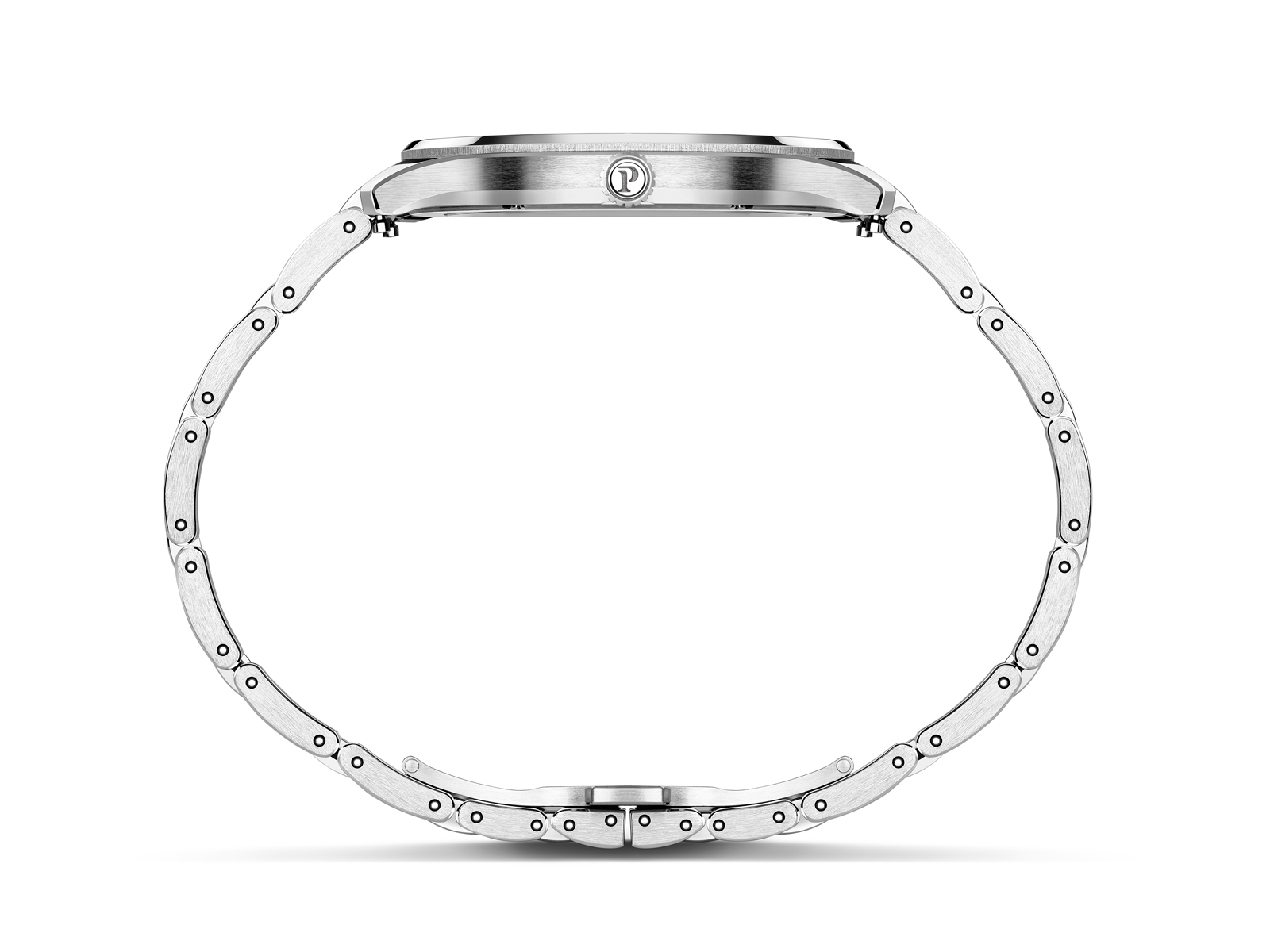 The Polo Skeleton is a mere 6.5 mm high

The Polo Skeleton not only gains stronger individuality in terms of design, but also intrinsically appealing visually. The open-worked face reveals the mechanics, giving it a degree of visual interest not found in the original. At the same time the skeleton movement imparts a more contemporary style to the watch, helping separate it from the many 1970s-inspired luxury-sports watches. 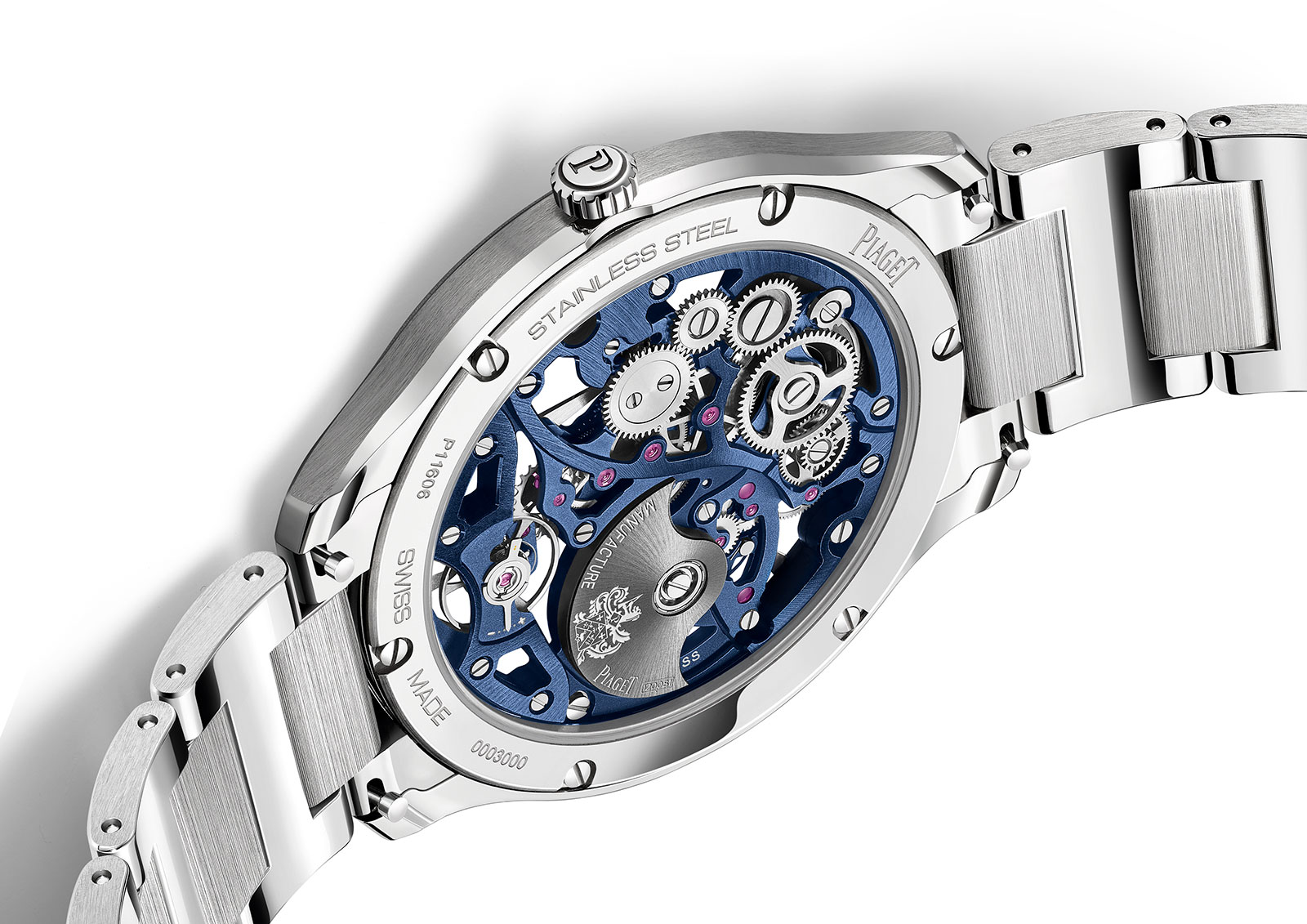 But unlike the original Polo S, the Polo Skeleton isn’t as compelling price wise. Its price tag of US$30,100 is substantial, albeit fair as such things go. That said, it’s still the entry-level skeleton watch is the Piaget line up. The next most affordable watch with the same open-worked cal. 1200S costs twice as much. The open-worked movement is offered in two finishes

The Polo Skeleton case retains the same 42 mm diameter of the Polo S, but trims its height to just 6.5 mm, making for a watch that has an extremely flat profile on the wrist. Beyond wearability, the case also includes the practical feature of tabs on the spring bars of the bracelet, allowing for easy removal and swap with an alligator strap – the watch is delivered with both. 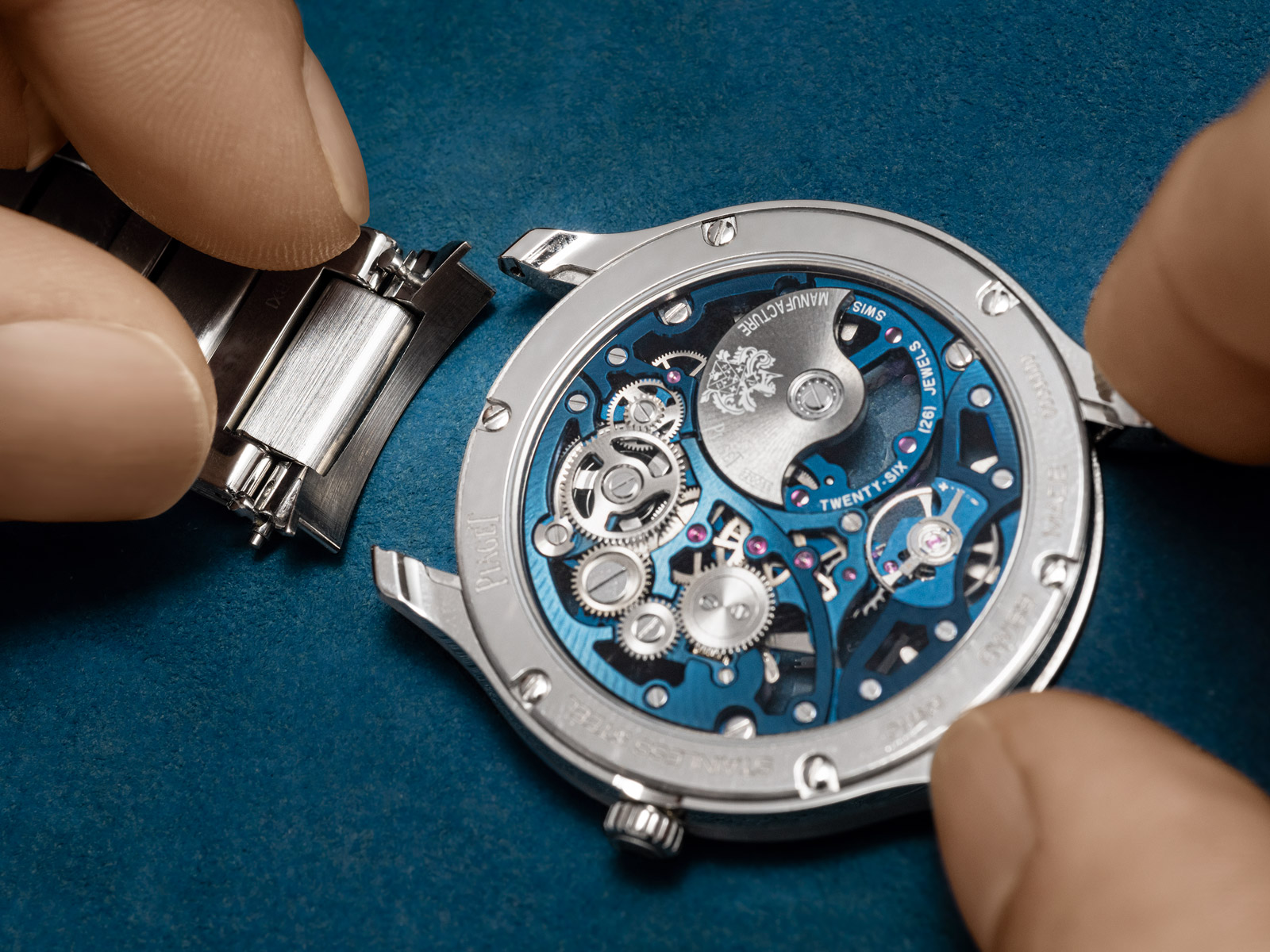 As demonstrated by its record-setting thinnest-watch-ever, Piaget excels at shaving down a movement to the minimum. And it’s also good at reworking bridges and base plates for maximum transparency.

The cal. 1200S in the Polo Skeleton shows off both capabilities well. The movement is ultra thin, and reveals practically the entirety of its moving parts. On the front, the winding wheels that connects the micro-rotor at nine with the barrel at 12 are visible, as is the going train that goes from the barrel to the balance wheel. Additionally, the keyless works for winding and setting are visible at three.

And the view is similarly airy from the back, which also reveals the micro rotor bearing the Piaget coat of arms, as well as the full balance bridge. Installing the balance assembly in the 1200S