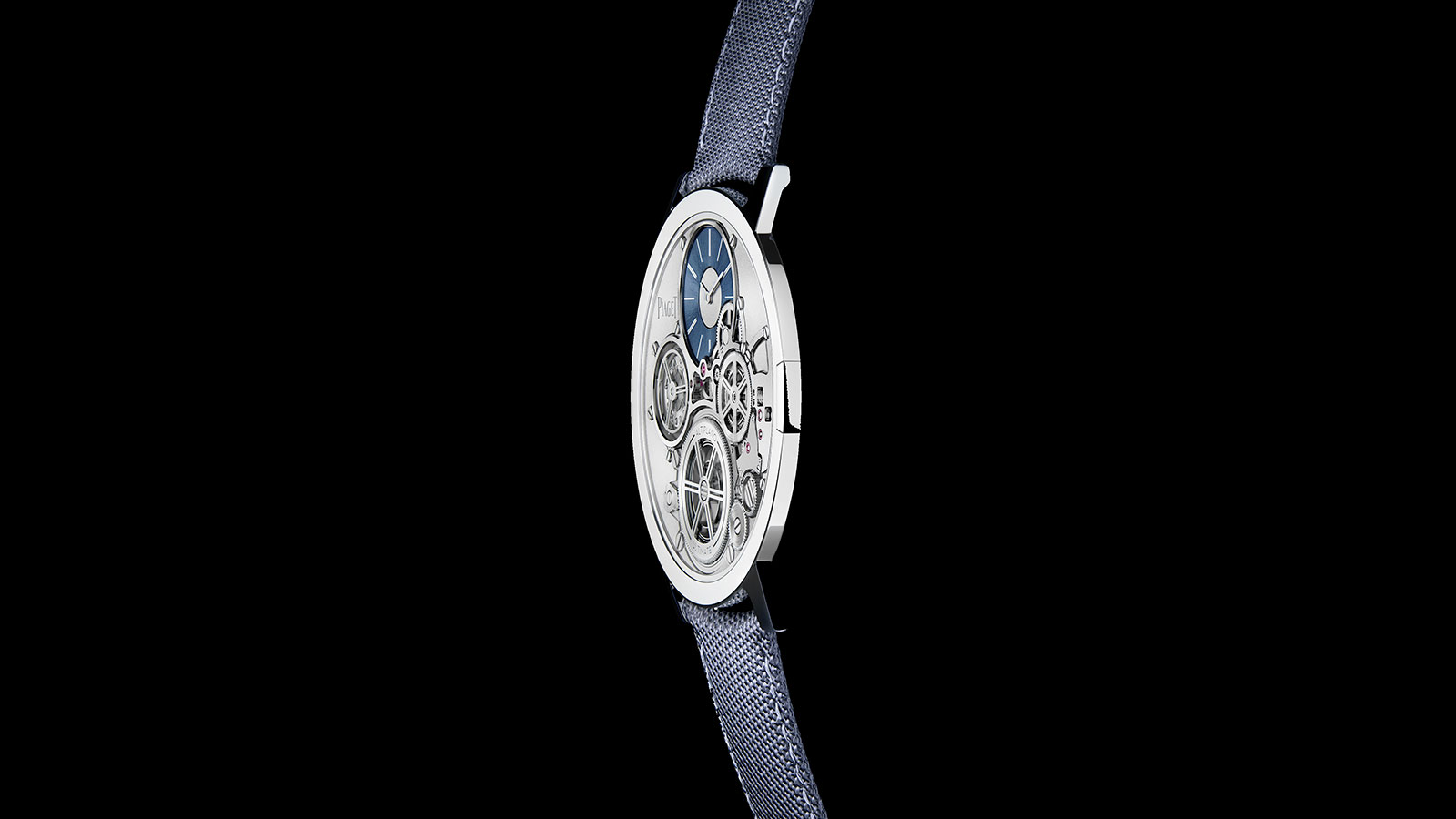 Piaget first introduced the Altiplano Ultimate Concept in 2018 as an exercise in pushing the limits of mechanical watchmaking – the thinnest mechanical wristwatch ever, at 2 mm in its entirety. Now the experimental creation has become reality at Watches & Wonders 2020, available as a wholly-customisable, special-order timepiece that’s still just 2 mm high – but accompanied by a staggering retail price.

No stranger to ultra-thin watches – the brand debuted its first extra-thin movement, the 9P, in 1957 – Piaget already claimed the title of thinnest-mechanical-watch-on-the-market in 2013 with the 3.65 mm-high Altiplano 900P. Most of the tricks relied on to create that record-setting movement have been repeated in the new Altiplano Ultimate Concept and its cal. 900P-UC, but in more extreme form, with the new watch boasting five additional patents for features relating to the extra thinness. 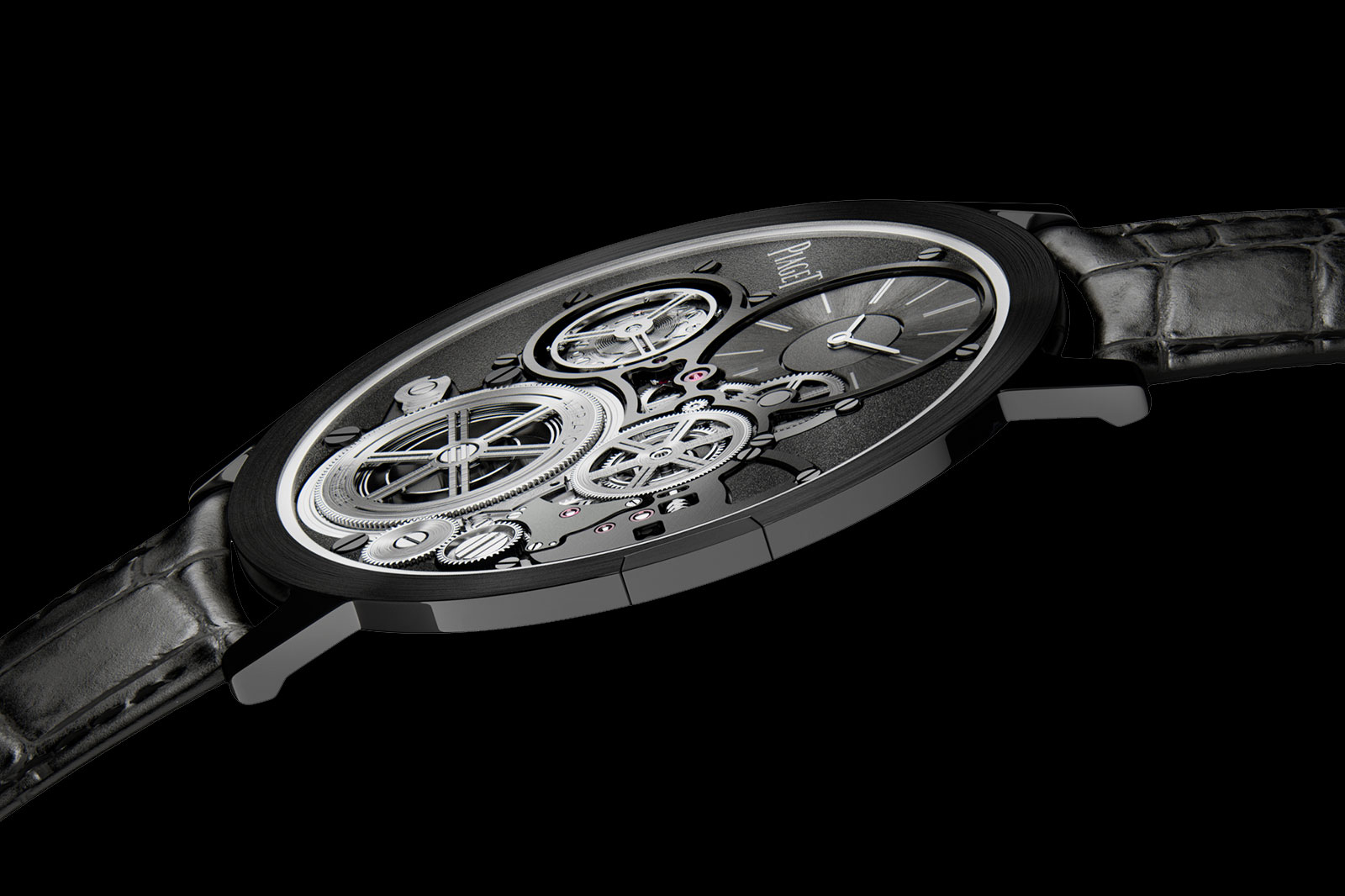 A sliver of cobalt alloy

Notably, the case and main plate of the Altiplano Ultimate Concept are one and the same, a single piece machined out of cobalt-based alloy for strength – gold is too soft and might bend if strapped too tightly on the wrist. As in the 900P, the case functions as the main plate of the 900P-UC, revamping a layer from the movement and reducing the overall thickness of the watch.

But despite being a single piece, the case and main plate can be specified with different finishes for contrast. For instance, the cobalt-alloy case can retain its natural colour with a polished finish, while the inside of the case is finished in a frosted black coating. 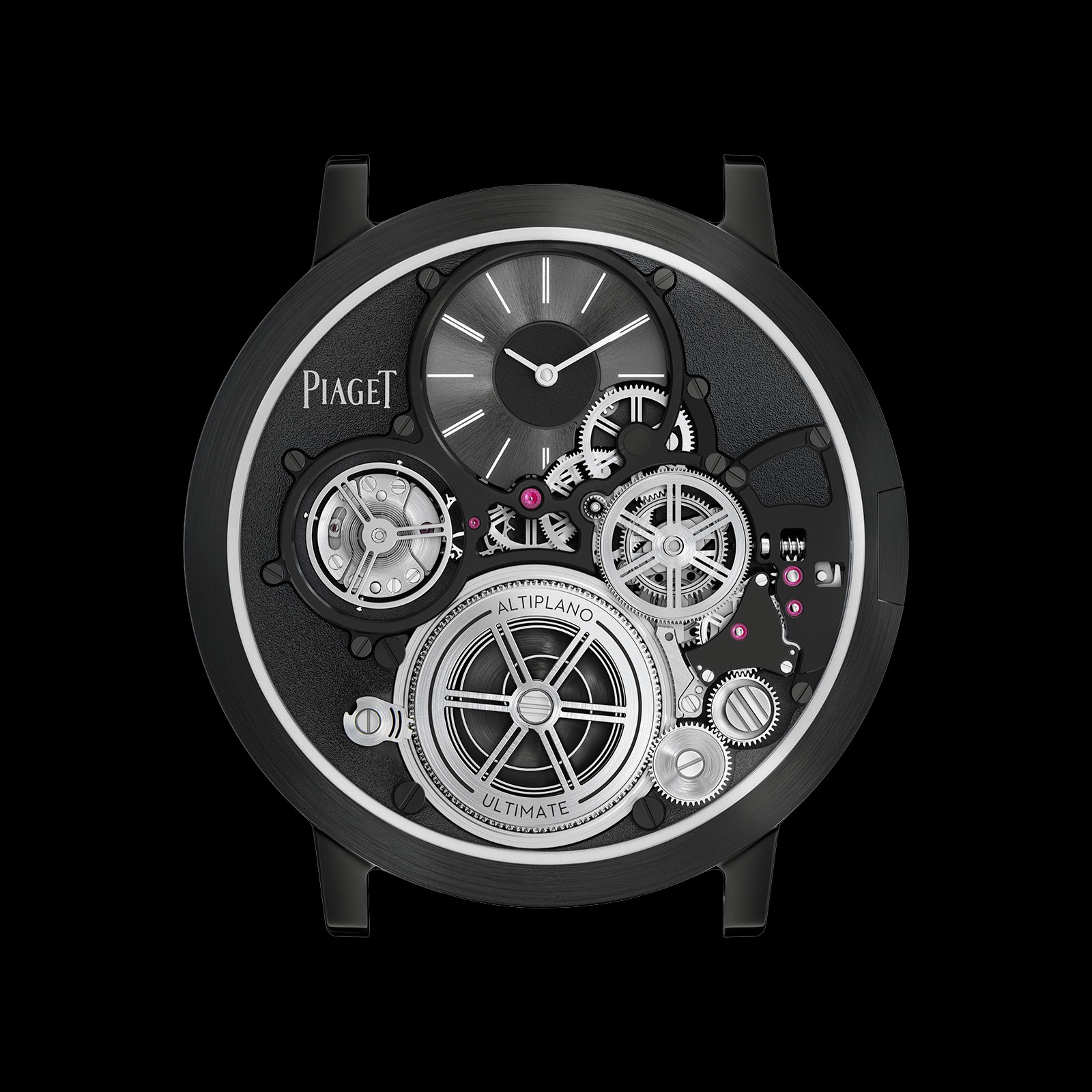 Reduced to a small sub-dial at 12 o’clock, the compact hours and minutes allow more space for the movement to be spread out flatly, rather than built upwards. The sub-dial is ringed by a flange that’s part of a larger, open-worked frame, which functions as a bridge for the pinions of movement.

Even more novel methods were employed to achieve the extreme thinness. Most interestingly, the movement has no balance bridge – often the tallest component in a slim movement and thus dictating its whole height – and instead the balance wheel has “floating” construction. It sits recessed in the main plate, supported on the bottom by ball bearings, leaving it floating. And because the balance staff is short and stout, without the conventional thin pivots on each end, it also goes without shock protection.

The floating construction also inverts the conventional set-up of the oscillator – the flat hairspring sits under the balance wheel. Because it would be tedious to rely on a traditional regulator in such a construction, the natural solution was a free-sprung balance with four adjustable weights for regulation.

Also notable is the exposed mainspring barrel at 6 o’clock. Instead of its arbor being supported by a bridge or “floating”, it is supported on the periphery with ceramic ball-bearings. The barrel ratchet wheel and first wheel sits slightly recessed within the peripheral ring, with the mainspring in-between, further reducing the thickness of the movement. And despite the very flat mainspring, it still manages a respectable 40 hours of power reserve. 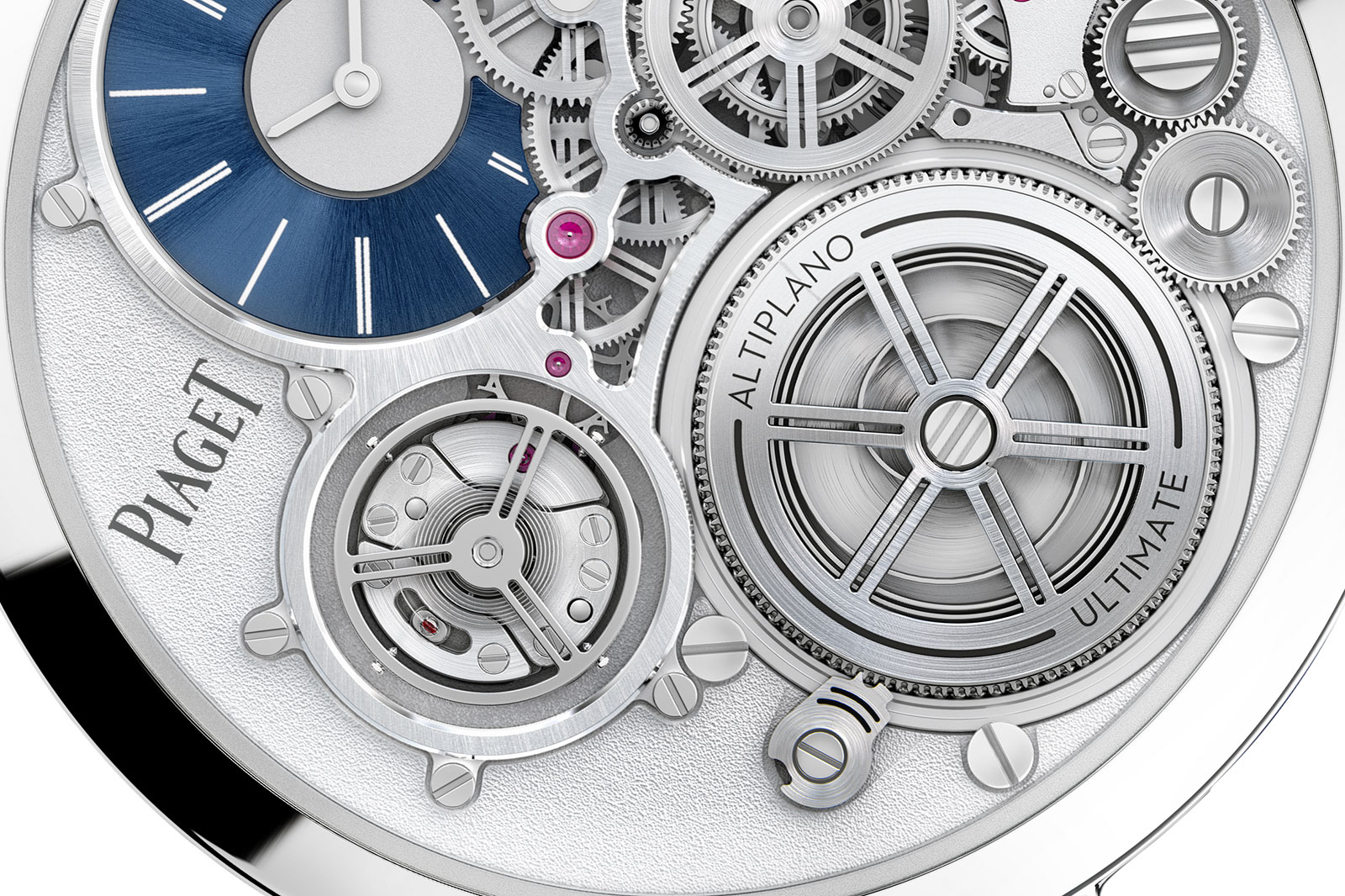 The “floating” balance (left), and the open barrel (right)

Another innovation is found in the keyless works. While a conventional set of keyless works contain a bulky winding pinion and crown wheel, the 900P-UC uses a worm gear instead, or what Piaget dubbed an “infinite screw”. This allows the gears to be sideways on a single plane, while allowing a high gear-reduction ratio in a compact space, creating enough torque to wind the mainspring.

A related design element is the crown, which is a flat rectangle that sits flush with the case, maintaining the thin, streamlined look of the watch while protecting the crown from impact. However, due to its diminutive size it is most practical to operate it using a motorised tool for winding and setting. 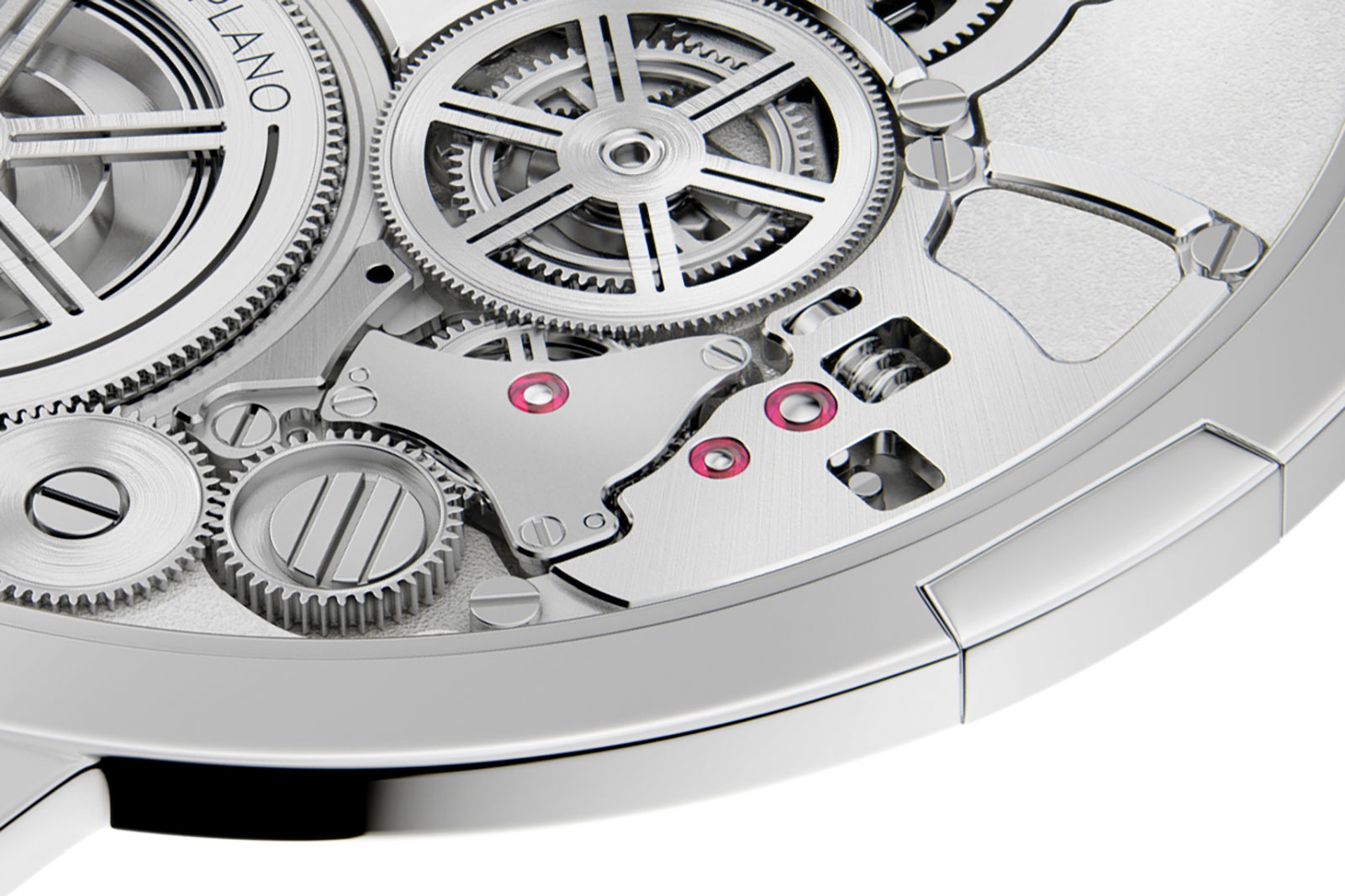 Other than that, the rest of the movement parts are conventional in form but made as thin as possible. The sapphire crystal for instance, is only 0.2 mm thick – a fifth of that found in a conventional watch. And the wheels have been reduced from 0.2 mm to 0.12 mm in height. Even the alligator strap is made ultra-thin, strengthened by a tear-resistant Kevlar lining. 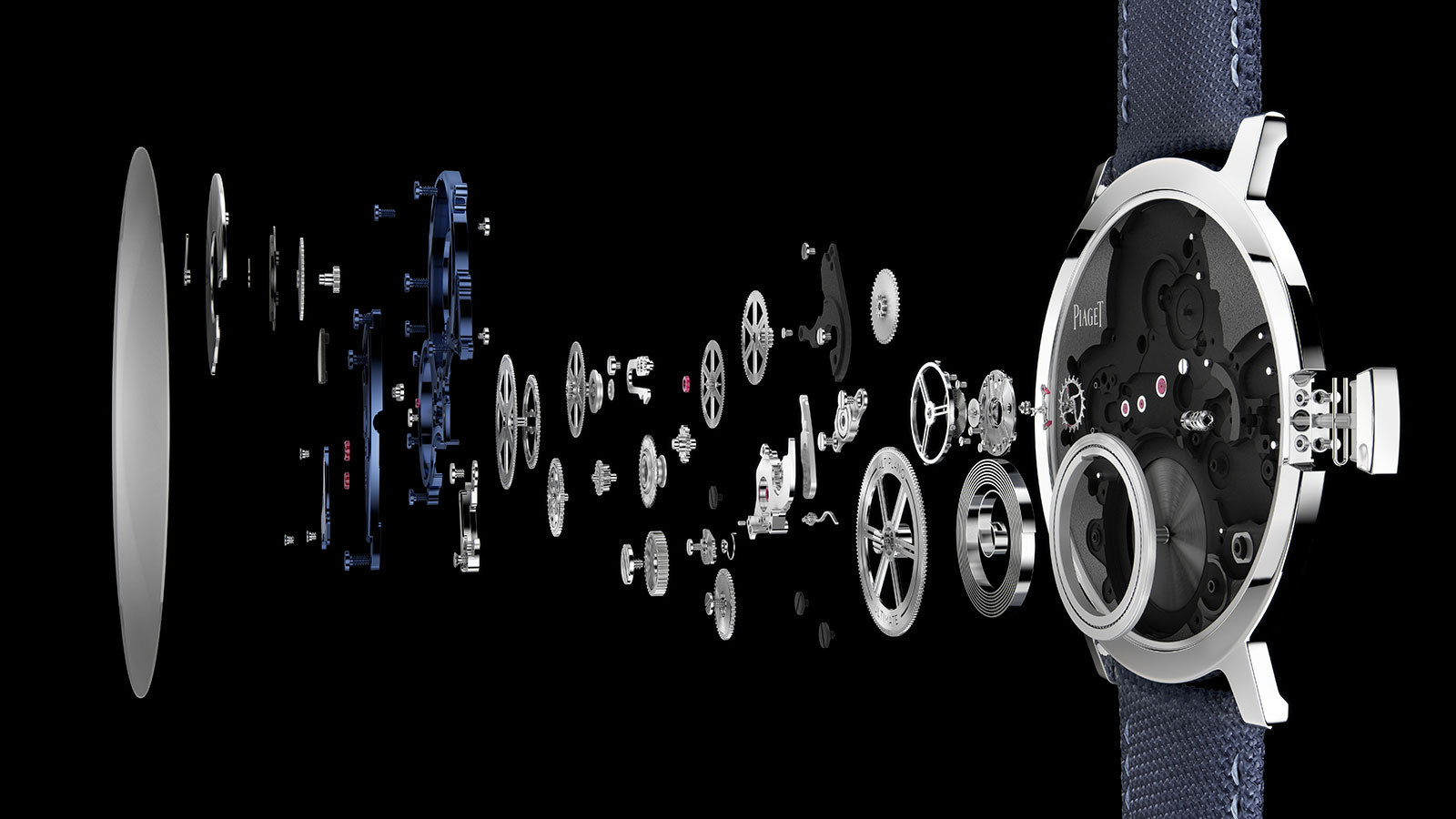 The Altiplano Ultimate Concept with be made to order, with customers being able to specify the colour and finish of nearly all components, ranging from the base plate to the hands to the chapter ring for the time.

But the cobalt-alloy case material is non-negotiable, being a necessity for the rigidity of the watch. 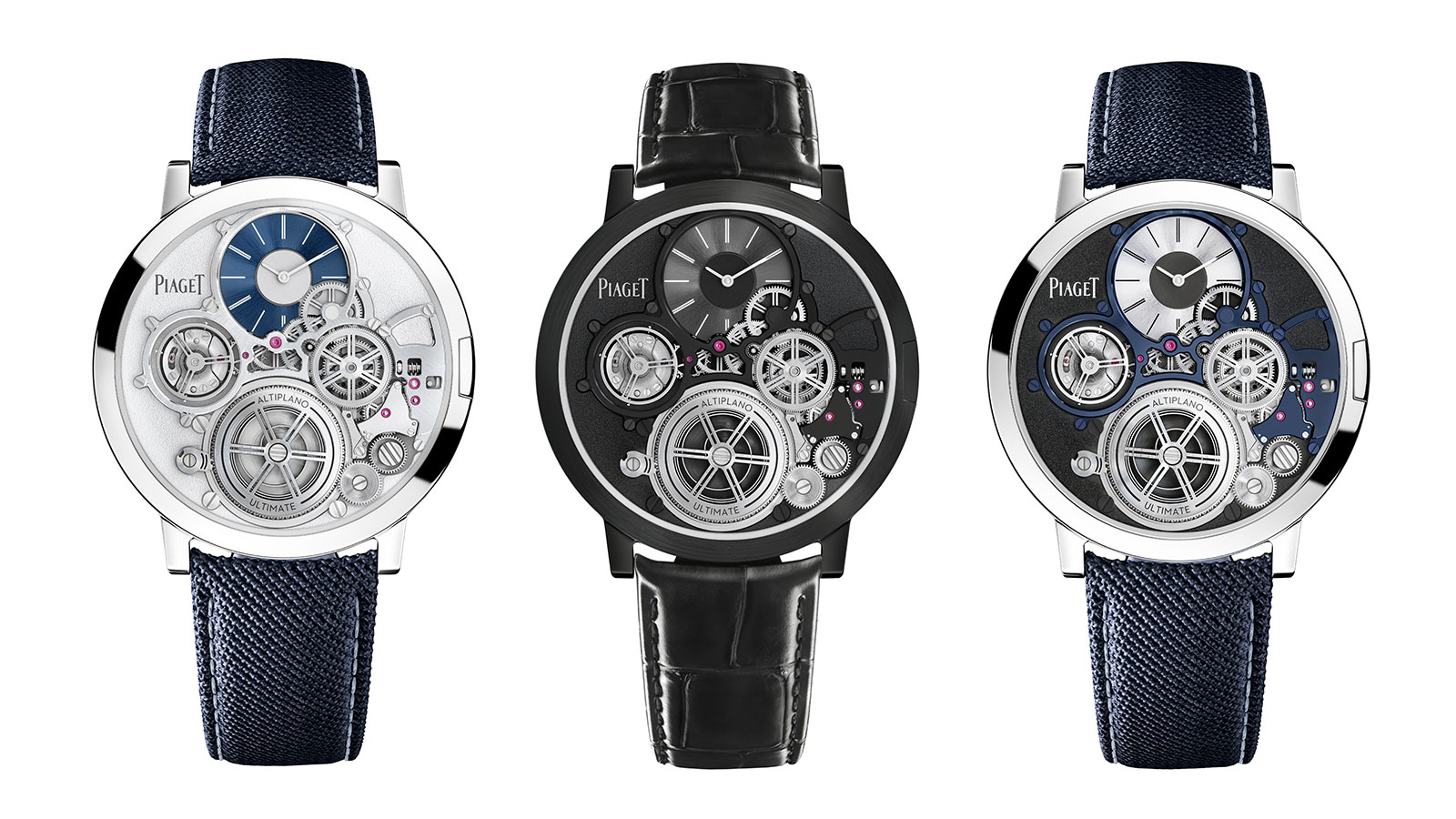 How Piaget Built the Thinnest Mechanical Watch Ever