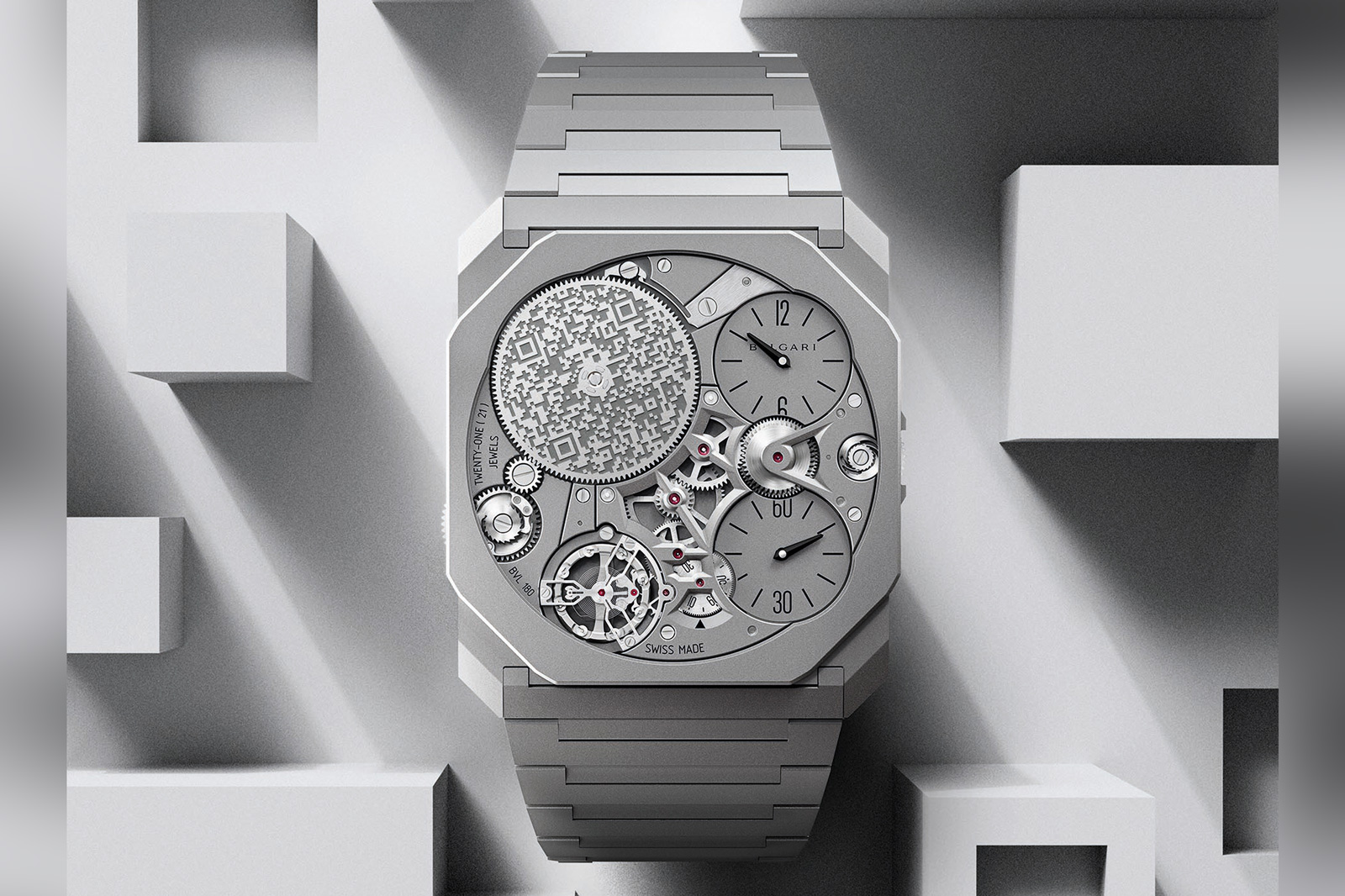 After notching up several world records for the thinnest watch in various categories, Bulgari had yet to claim the title of the thinnest mechanical watch. Piaget took the title in 2018 with the announcement of the AUC, which became commercially available in 2020.

But the Roman jeweller has finally bested its rivals with the Octo Finissimo Ultra, which is an astonishing 1.8 mm tall from crystal to case back, making it the thinnest watch on the market today (and also the thinnest in decades). It’s 0.2 mm slimmer than the Piaget AUC. The Ultra is certainly less, but is it more accomplished? 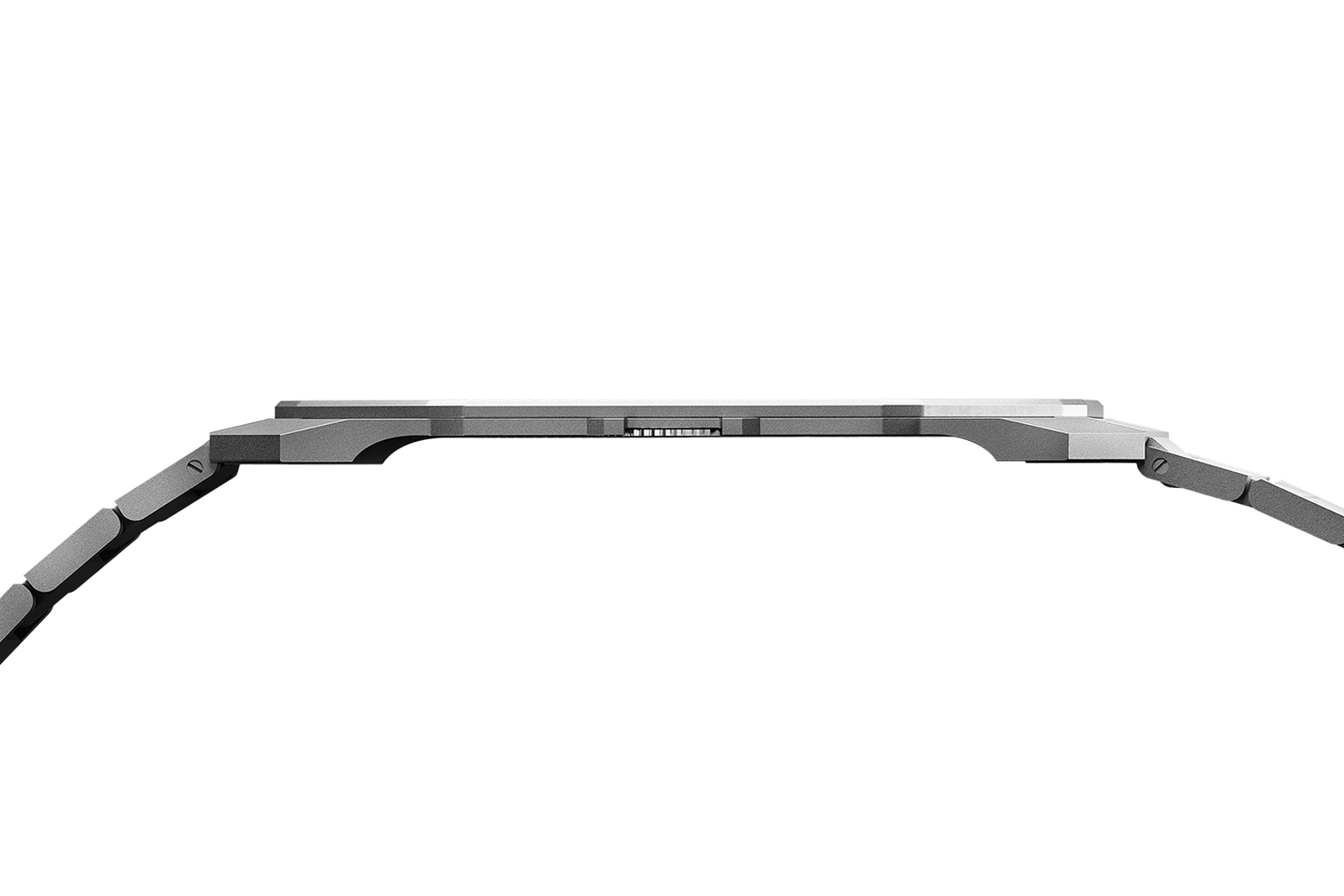 Trumping the previous title holder by a sizeable margin of 10%, the Octo Finissimo Ultra is an impressive achievement, even though the race to the be the flattest has been ongoing for a long time.

For starters, the Ultra does well in terms of design. While the design is based on the long standing Octo Finissimo, it doesn’t take away from its appeal. The Ultra is the sportiest watch among the thinnest of ultra-thin watches, with striking contemporary lines. 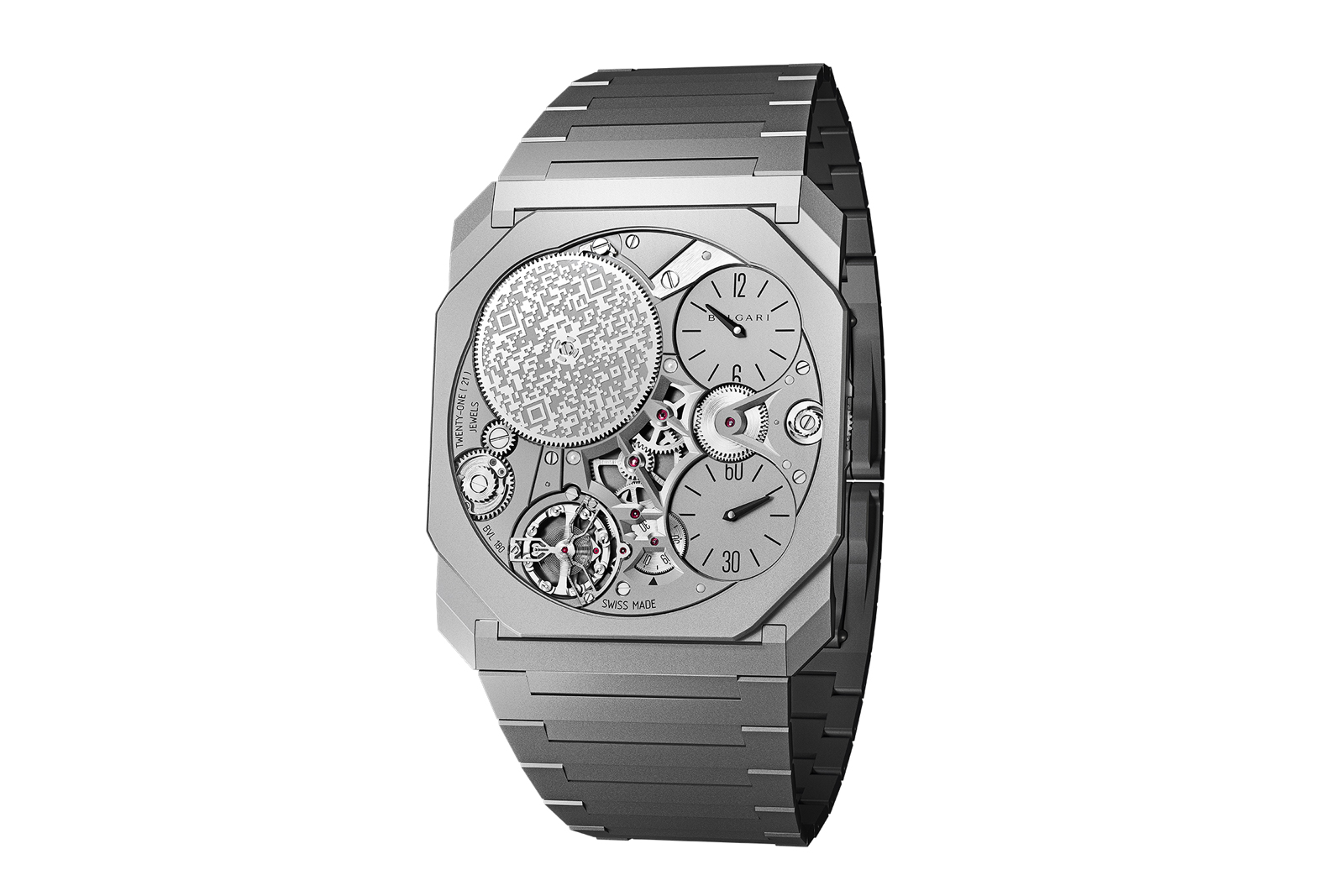 And it is very much a watch of today, literally. The large barrel ratchet wheel is engraved with a QR code providing access to an NFT artwork that accompanies each watch. It is tacky both as an idea and also up close, but at a distance the pattern of the code could pass for a decorative motif that fills up what would otherwise be a wide open space. 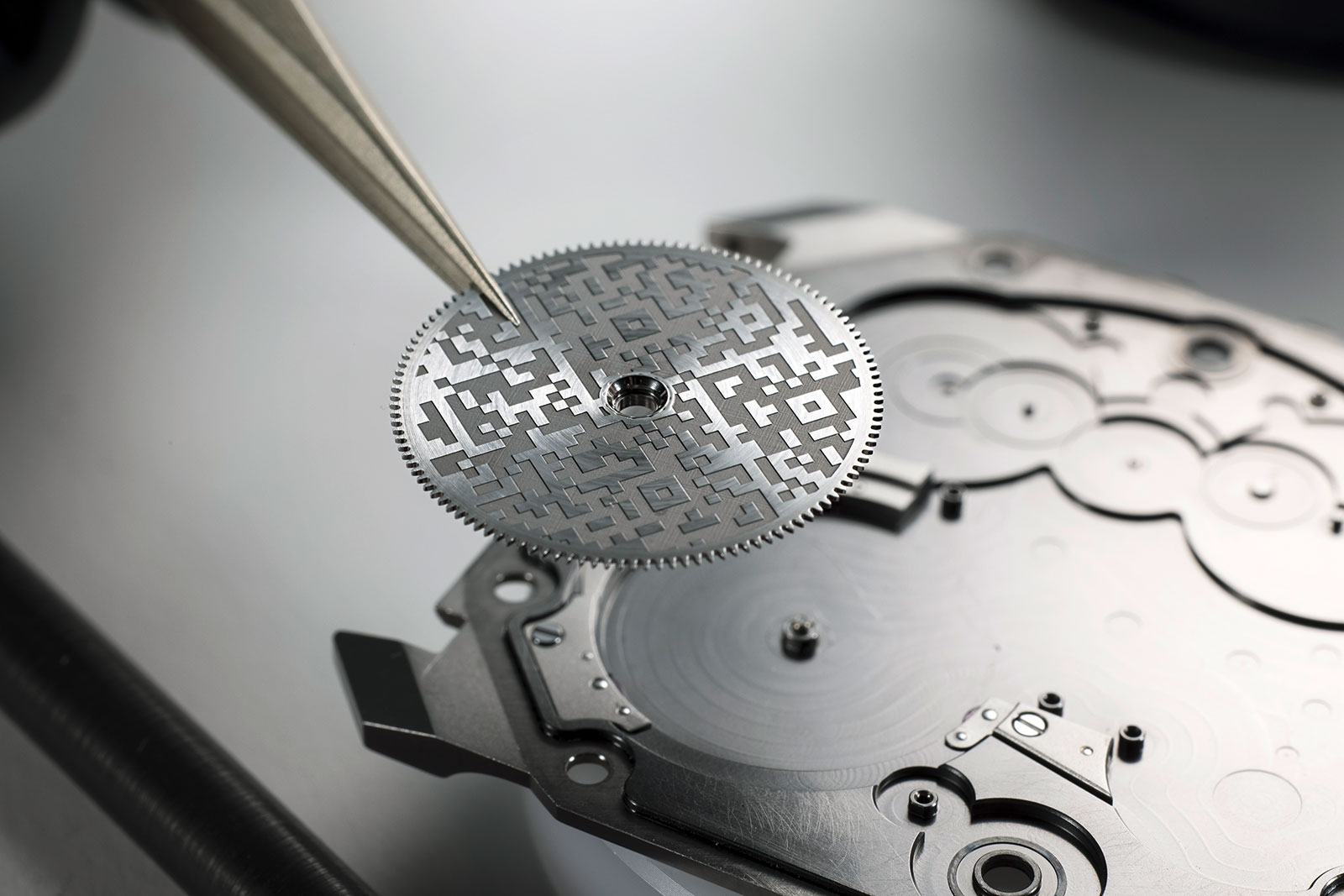 But the burning question is how did Bulgari’s latest beat the Piaget AUC?

The answer lies in two different approaches to movement construction. The AUC largely adheres to the basic conventions for a watch: it has the hour and minute hands on a single axis, as well as a single crown for winding and time setting.

In contrast, the Ultra relies on a regulator-style display that separates hours and minutes, while also splitting the crown functions into twin lateral, “backwind” crowns. Those features mean the movement is inherently thinner (more on this later) – and can be regarded as either compromises or innovation.

The differences make the comparison between the two less straightforward, but it doesn’t take away the fact that the Ultra is impressively diminutive at 1.8 mm. A race to the flattest

Like the Piaget AUC, the Ultra combines the base plate and case back into one, while also having the bridge double up as the dials. But the Ultra spares no effort in spreading out the components of the movement as much as possible – it contains only a handful of vertically stacked components.

Those efforts are most obvious with the regulator display, which avoids the vertical height needed for conventionally arranged hands that sit one on top of another, as well as doing away with the stacking of the underlying gears needed to drive the hands. Interestingly, the gear train has an extra wheel at its start, which means the seconds disc is drive by the fifth wheel, instead of the conventional fourth.

The auxiliary wheel at the start is directly connected to the barrel, so it helps transmit energy from the mainspring. Because the auxiliary wheel is connected to the minute wheel, it also functions as an intermediate wheel in the motion works, serving to convert the rotational speed of a minute wheel to that of an hour wheel – a ratio of 12:1. In other words, the motion works are spread out and flattened, instead of being stacked up right below the hour and minute hands as is convention. Because the movement is inverted – or back to front – the fourth wheel turns counterclockwise when viewed from the front, a problem that is solved with the addition of a wheel to the gear train. But oddly enough the fourth wheel still rotates counterclockwise, because the rotational direction of the barrel has been reversed due to the position of the winding click. As such, the fourth wheel has printed numerals to indicate the seconds, which reads more naturally as it is running “backwards” and also negates the need of a seconds hand.

The second secret to the Ultra is the transformation of the crown. A conventional crown sits perpendicular to the case, but here it takes the form of not one but two crowns positioned parallel to the case – and flush with the case back. The twin crowns on the back

The “backwind” crowns immediately eliminate the need for components positioned at right angles to one another, such as the castle wheel. And even more space is saved since each crown serves a different purpose, a feat that required some clever ideas to pull off.

The winding crown, for example, is smartly simple. It directly winds the barrel via a grand sonnerie-style click, which acts as a one way clutch. The compact design remains flat without the 90-degree castle wheel, reducing the vertical volume it occupies hence preserving thinness. 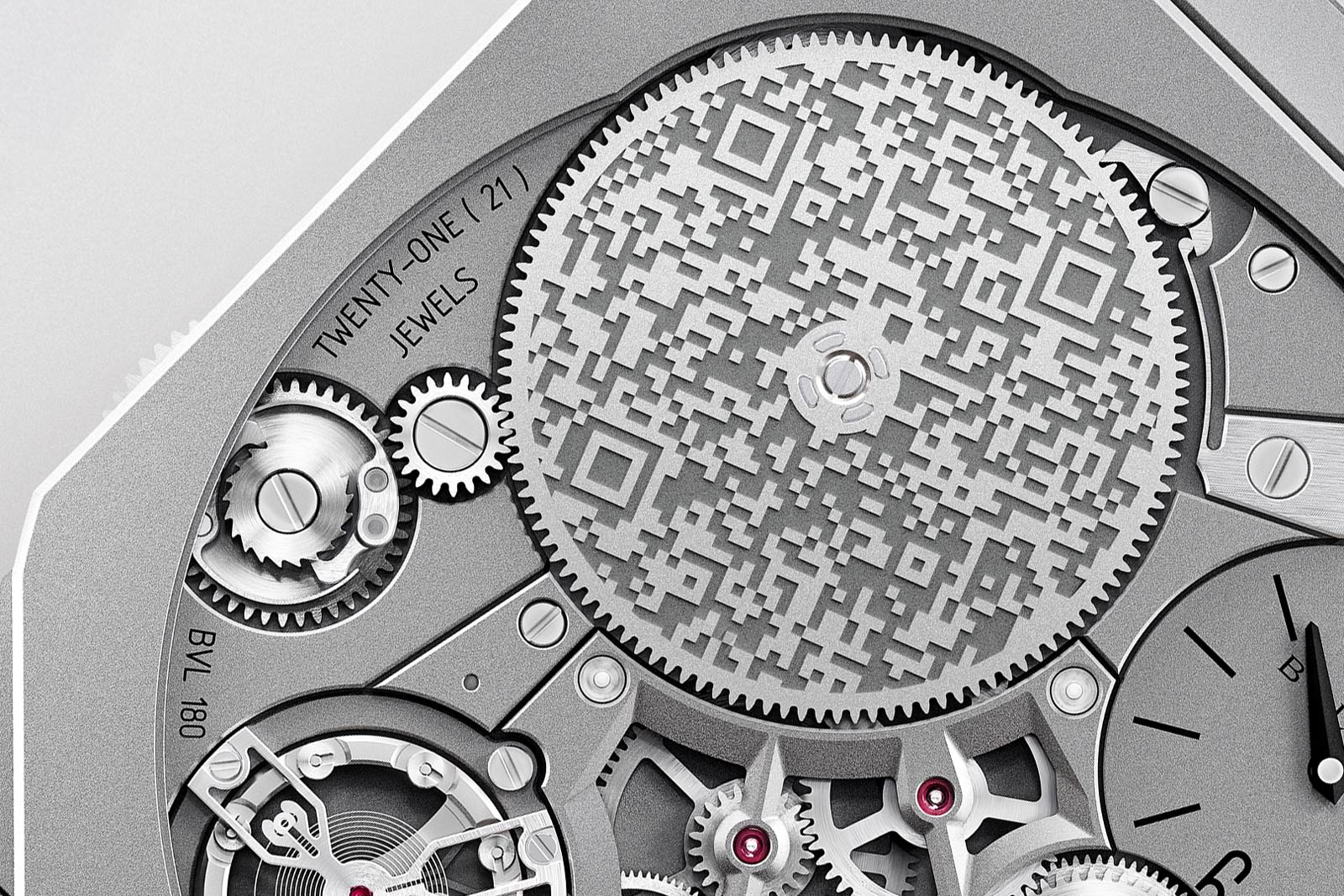 Meanwhile, a second crown is used to set the time. It uses a differential system, a more sophisticated solution than the usual friction clutch. But to prevent the barrel from unwinding via the time-setting crown, another grand sonnerie-style click is called into service, which unfortunately means that the time can only be set forwards and not backwards.

The BVL 180 is surprisingly elegant in its construction and finishing despite the limited surfaces for decoration.

Among the most handsome components is the balance assembly, which is made up of a circular balance bridge along with a free-sprung balance. Notably, the balance assembly is modular, making servicing easier since the assembly can be replaced during an overhaul. This is a useful feature it will no doubt be challenging and time-consuming to service a delicate movement such as this. While the movement barely has any anglage, the bridges that are machined with wide, steep bevels along their edges that even include a few inward angles, adding another dimension of visual interest. Correction March 23, 2022: The Ultra is not the thinnest mechanical watch ever, that title goes to the Jean Lassale 1200 that was 1.2 mm high.