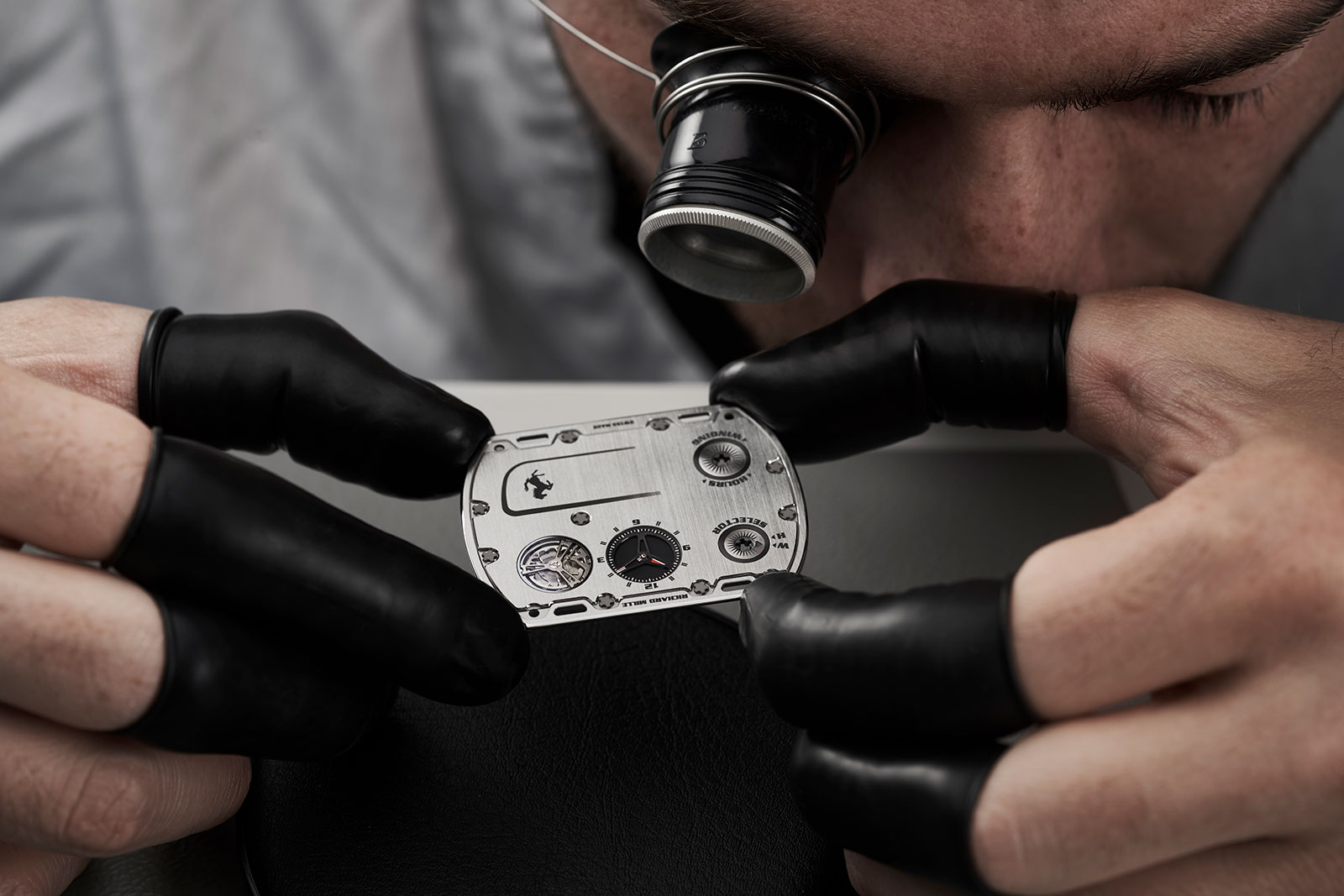 Having signed Ferrari as a partner last year, Richard Mille was expected to debut a Ferrari wristwatch – and probably one with a seven-figure price tag. And so it has, although the watch itself is certainly a surprise.

The first watch to result from the partnership is the RM UP-01 Ferrari, the thinnest mechanical watch ever at just 1.75 mm high, besting the previous record holder by 0.05 mm. Very wide and extremely flat, the RM UP-01 achieves that by relying on familiar principles in terms of mechanical deconstruction and reduction, but takes them slightly further to shave off the millimetres. 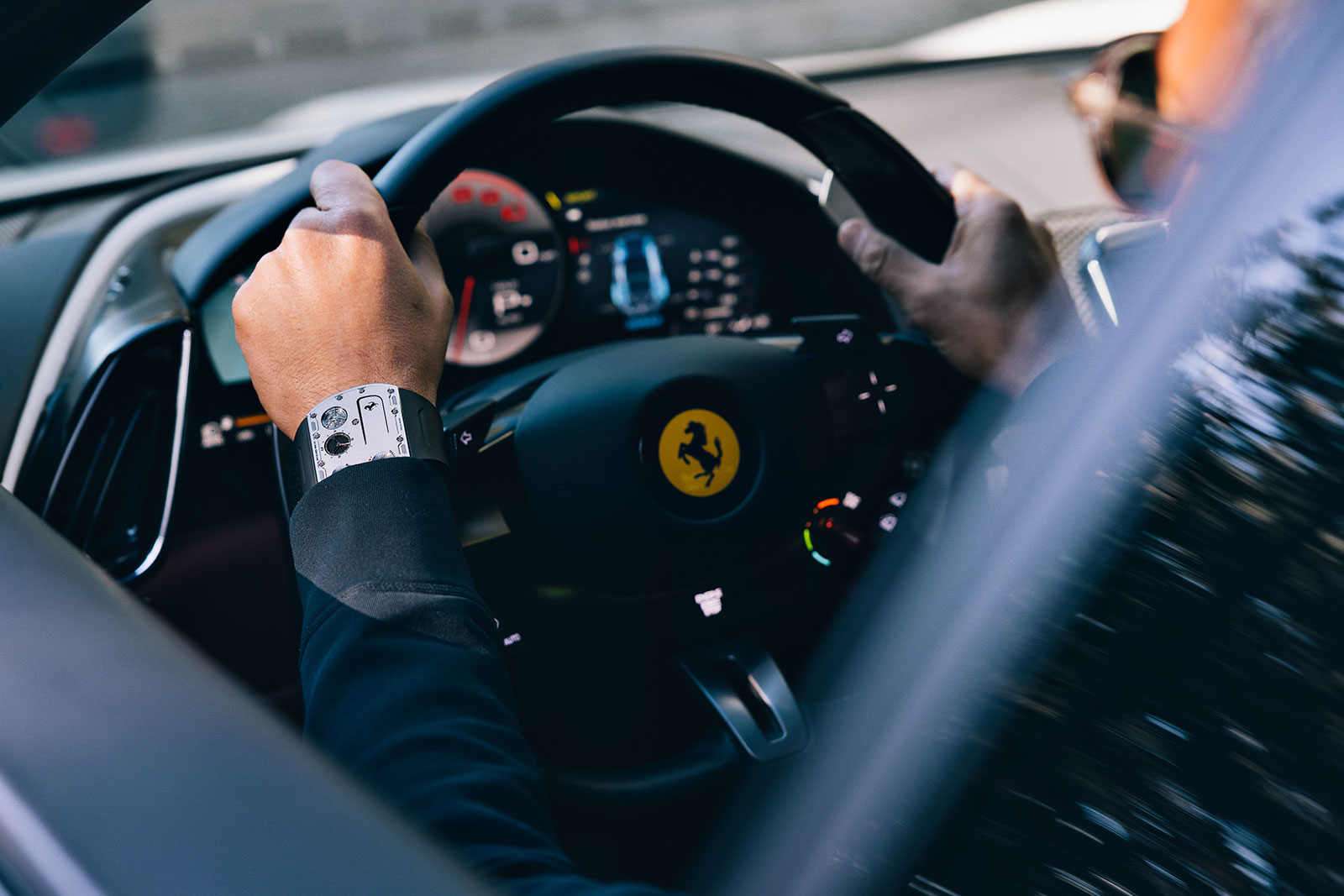 The last couple of years have seen the record for the thinnest mechanical watch change hands rapidly, with Piaget taking the title in 2018 with the AUC (that came to market in 2020), followed by Bulgari earlier this year with the Octo Finissimo Ultra. The Italian jeweller did not retain the crown for long because Richard Mille has just claimed the title with the RM UP-01 that stands 1.75 mm high, compared to 1.8 mm for the Bulgari. 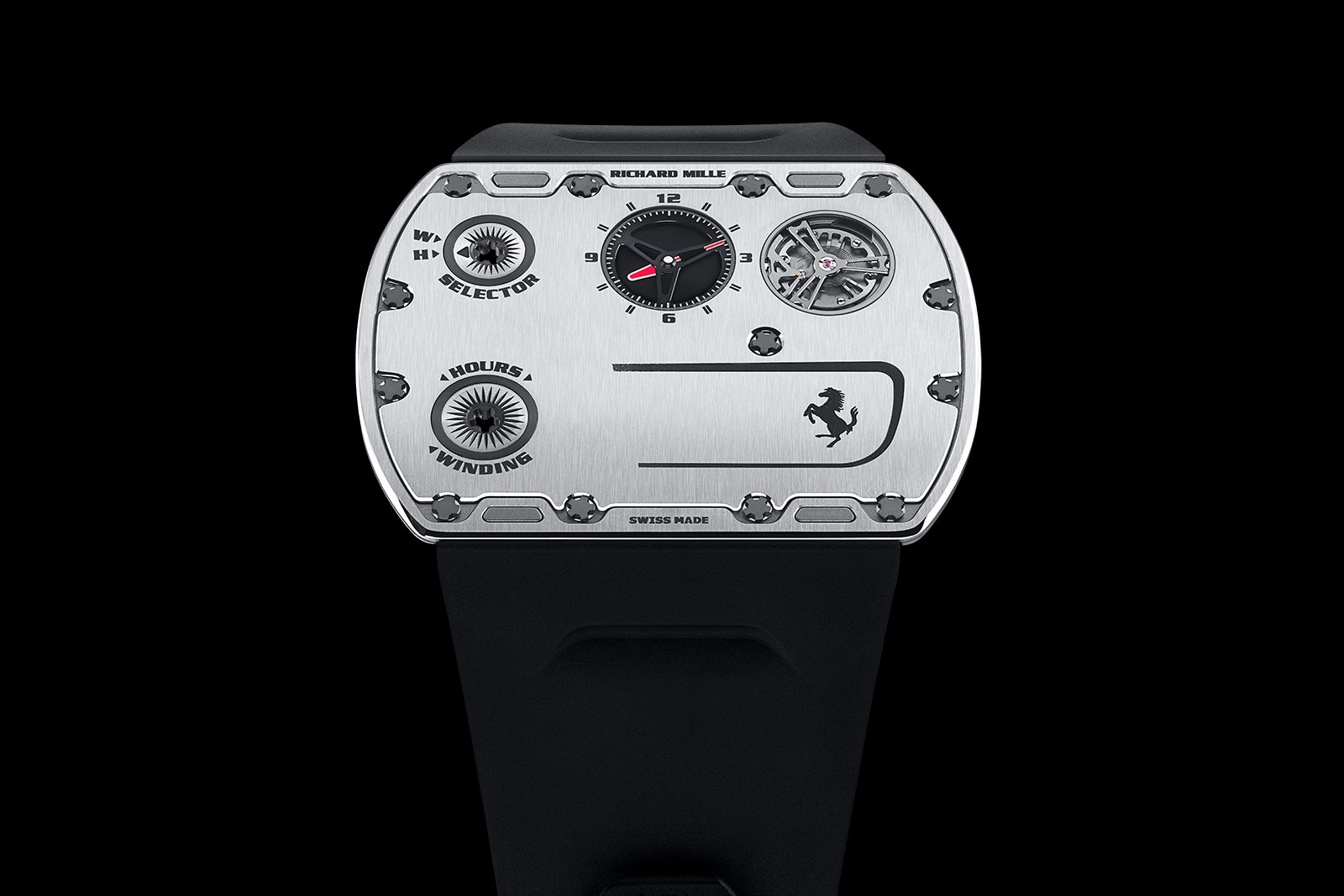 Tellingly, the approach taken by Richard Mille echoes that of Piaget and Bulgari, essentially deconstructing the movement and doing away with as many components as possible. As a result, the RM UP-01 has parallels with the former record holders, most obviously in the tiny time display as well as the deconstructed winding and setting mechanism that each require a key. 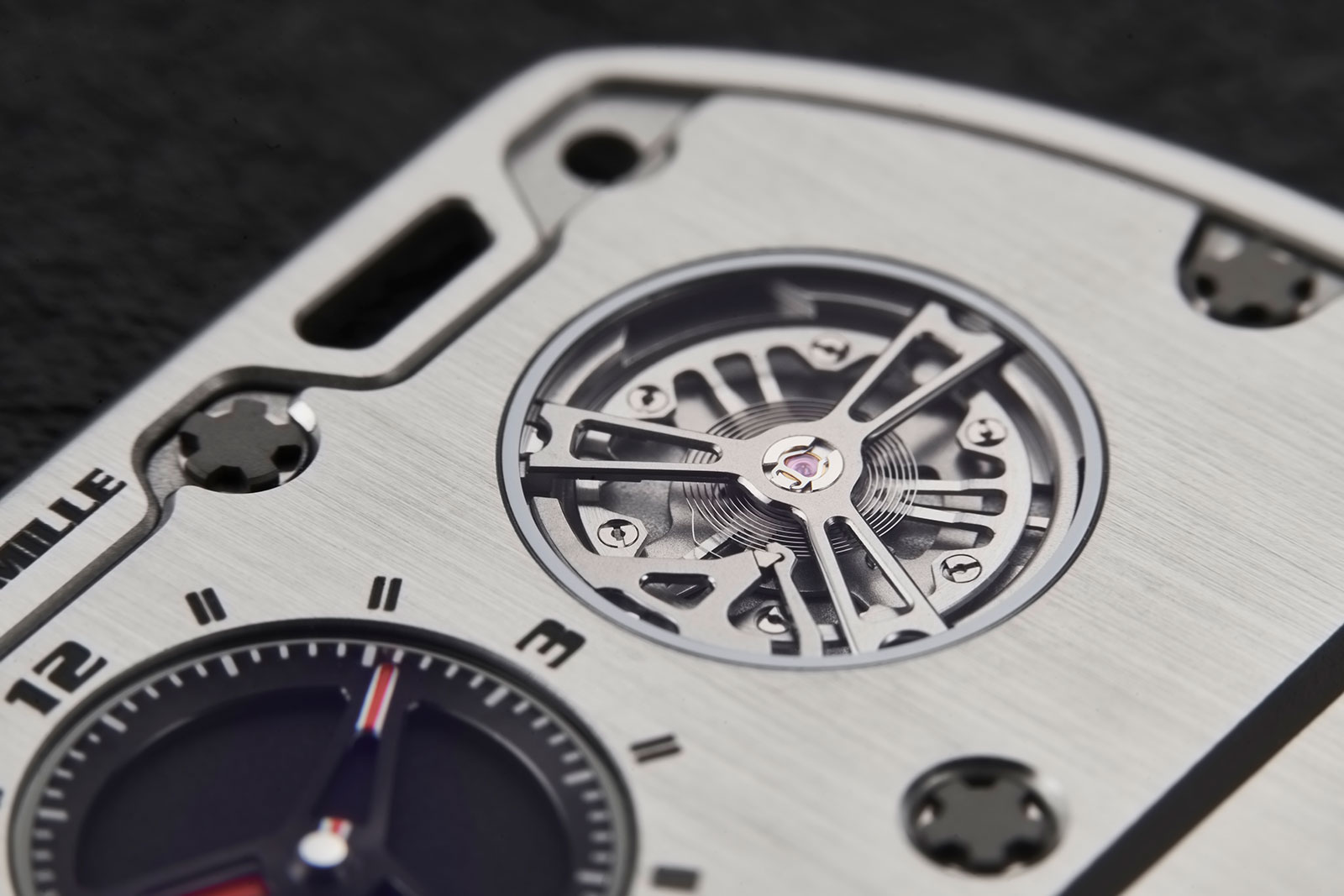 That indicates that absolute thinness has more or less been achieved with current watchmaking technology. The only major technical advance in the RM UP-01 is arguably the patented escapement that has a uniquely shaped pallet fork.

Seen from that perspective, the RM UP-01 is impressive but not groundbreaking. Instead, it is an incremental improvement – or more accurately, an incremental reduction – in thinness thanks to clever engineering that builds on past ideas. 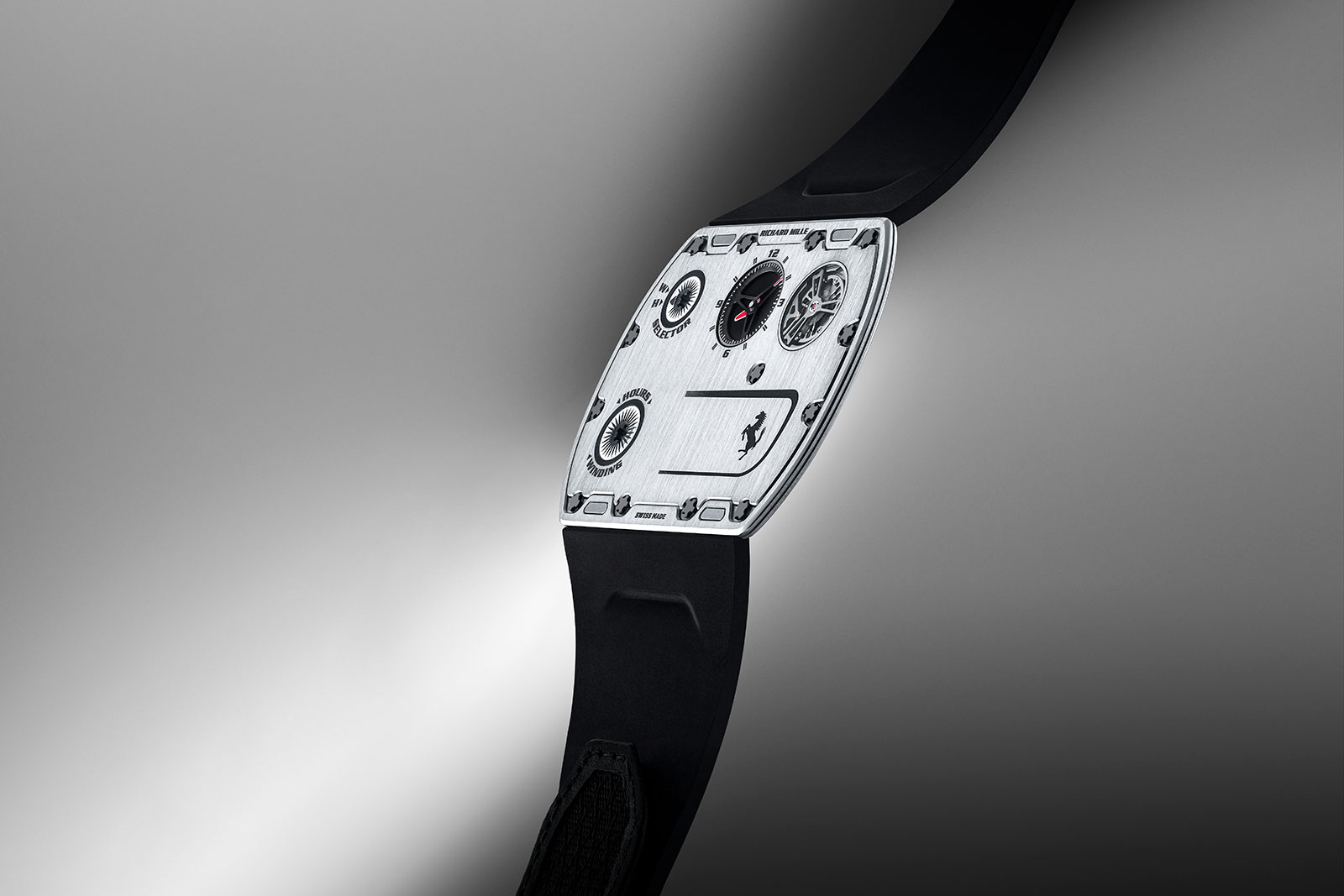 As for the aesthetics, they are definitely peculiar. However, it is no better or worse than the earlier title holders, all of which are so thin they are almost like paper wristbands. Being the thickest, and arguably the one with fewest compromises, the Piaget AUC is the only one that resembles a conventional watch.

The style of the RM UP-01 does suit the automotive inspiration, since it looks very much like a tiny instrument panel. Whether or not that makes sense for a timekeeper on the wrist is debatable, but at least it lives up to the Ferrari theme.

With a retail price of CHF1.7 million before taxes, the RM UP-01 costs more than most Ferraris. The price can’t be justified by its technical merits as a watch, but Richard Mille has long departed the realm of watches. It is now arguably the only brand that is firmly established as a bona fide status symbol across its entire product offering. From that perspective the price makes sense. 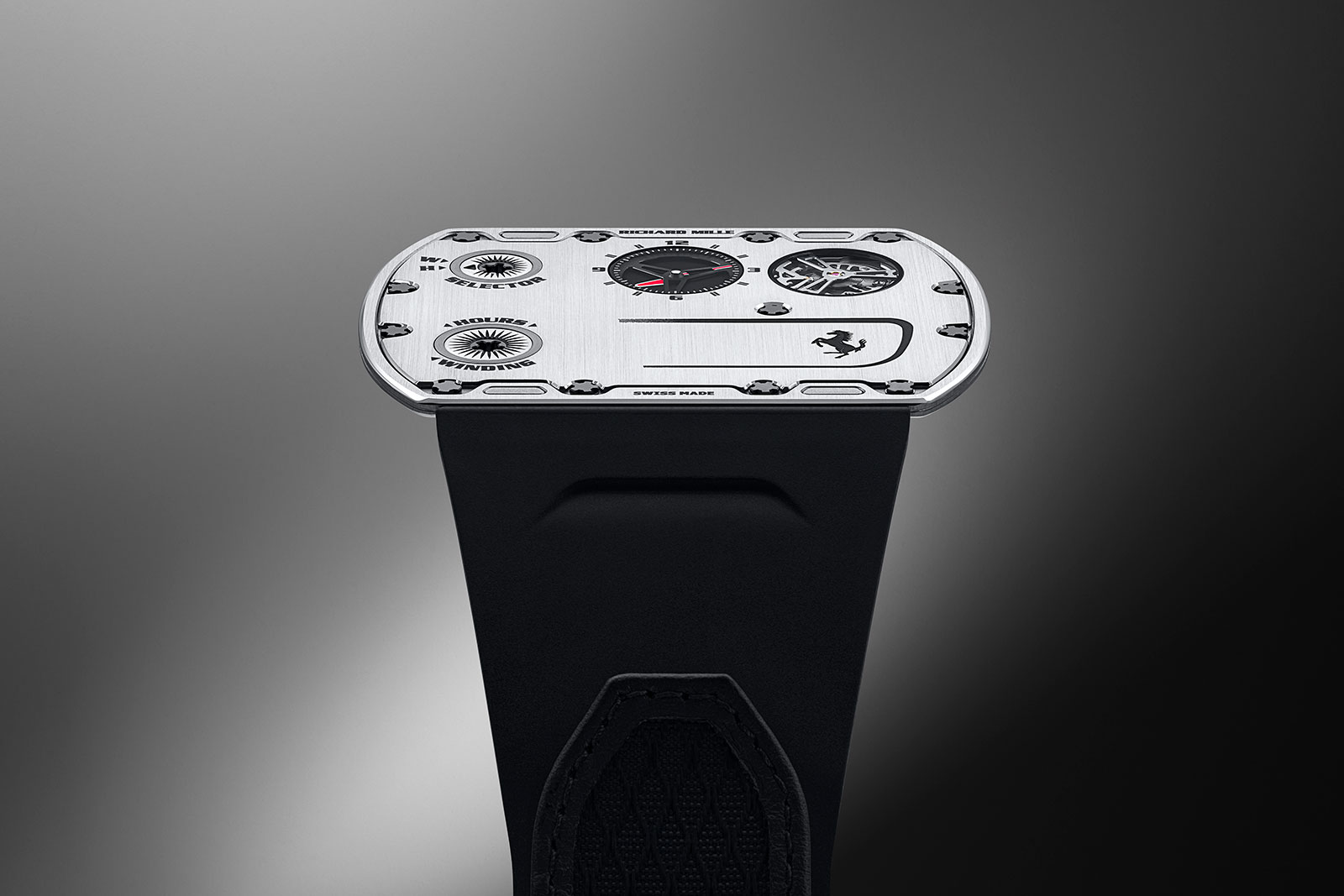 The RM UP-01 is wide and flat, almost disproportionately so. It measures 51 mm by 39 mm on the front, and stands just 1.75 mm high, while its weight is just 30 g including the rubber strap.

Screwed onto the back with the trademark “spline” screws of Richard Mille, the front panel is essentially a thin piece of brushed titanium with four apertures. The RM UP-01 has no crown because of the two apertures on the left corners, which are sockets for winding and setting – each of these functions requires a key that plugs into the socket to perform the function. The centre aperture indicates the time with both the hour and minute hand on the same axis. With the time display about 10 mm wide, legibility is probably not the best.

And the rightmost aperture reveals the titanium balance wheel, which is free-sprung and regulated with adjustable weights. While the balance is largely conventional, it is connected to a patented escapement that has a modified pallet lever, allowing the escapement to to do away with the guard pins and safety roller. Despite the thinness, the construction of the case is surprisingly conventional in that the movement is a discrete element of the watch. The front panel is vertically brushed and sits within a recess in the case back, with the two halves held together by 13 screws. In between is the movement, which sits within a further recess on the case back. 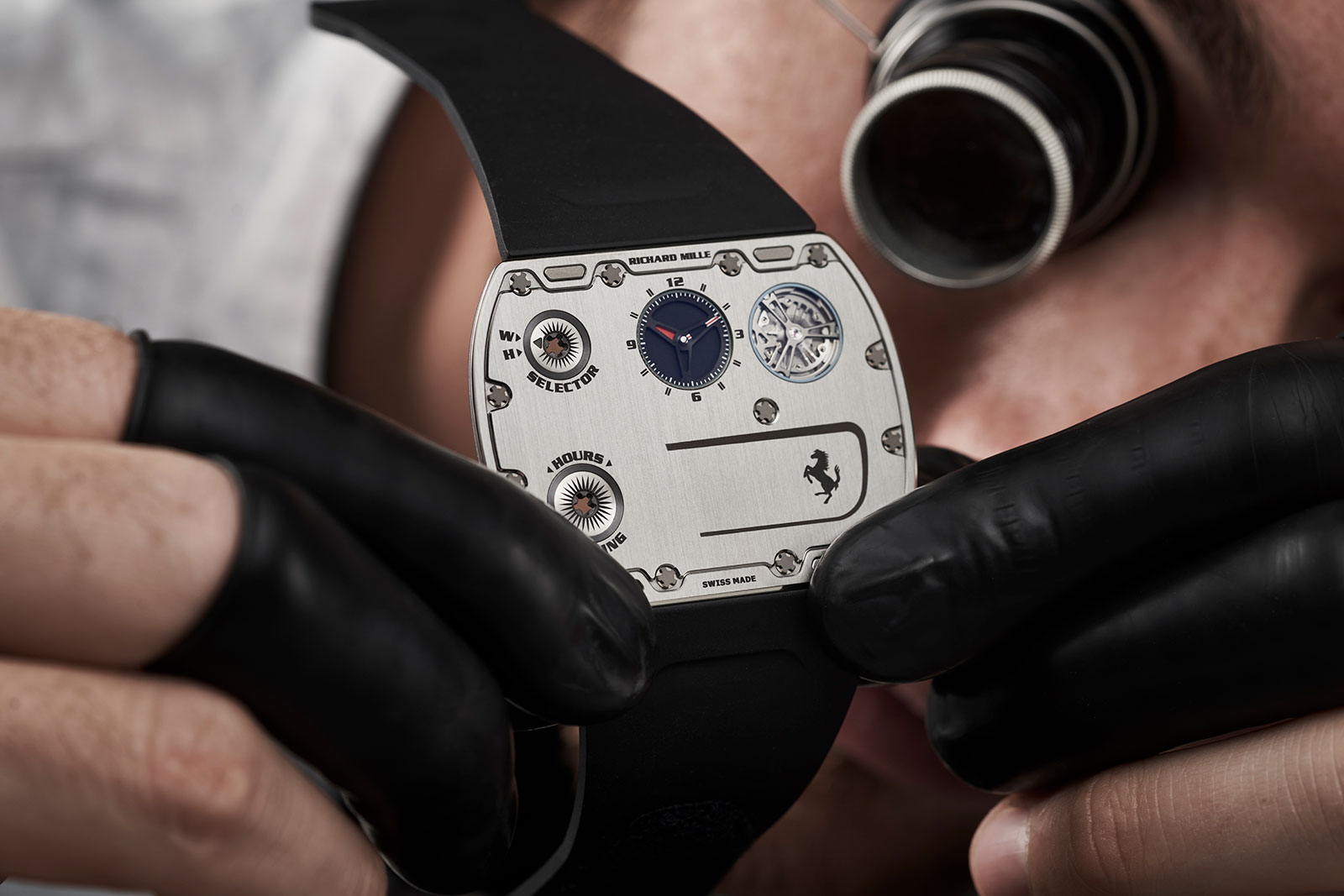 The compact movement is sandwiched in between the case front and back, with almost everything – case panels and movement bridges – made of titanium. This contrasts with past record holders for thinnest-watch-ever, all of which combined the movement base plate with the case back, eliminating one layer of the watch entirely.

Mechanically the movement is fairly conventional, in the sense that everything is driven by gears on the horizontal plane. Additional gearing is needed to split the winding and setting functions into separate sockets, resulting in a larger footprint for the movement, but without adding to its height. 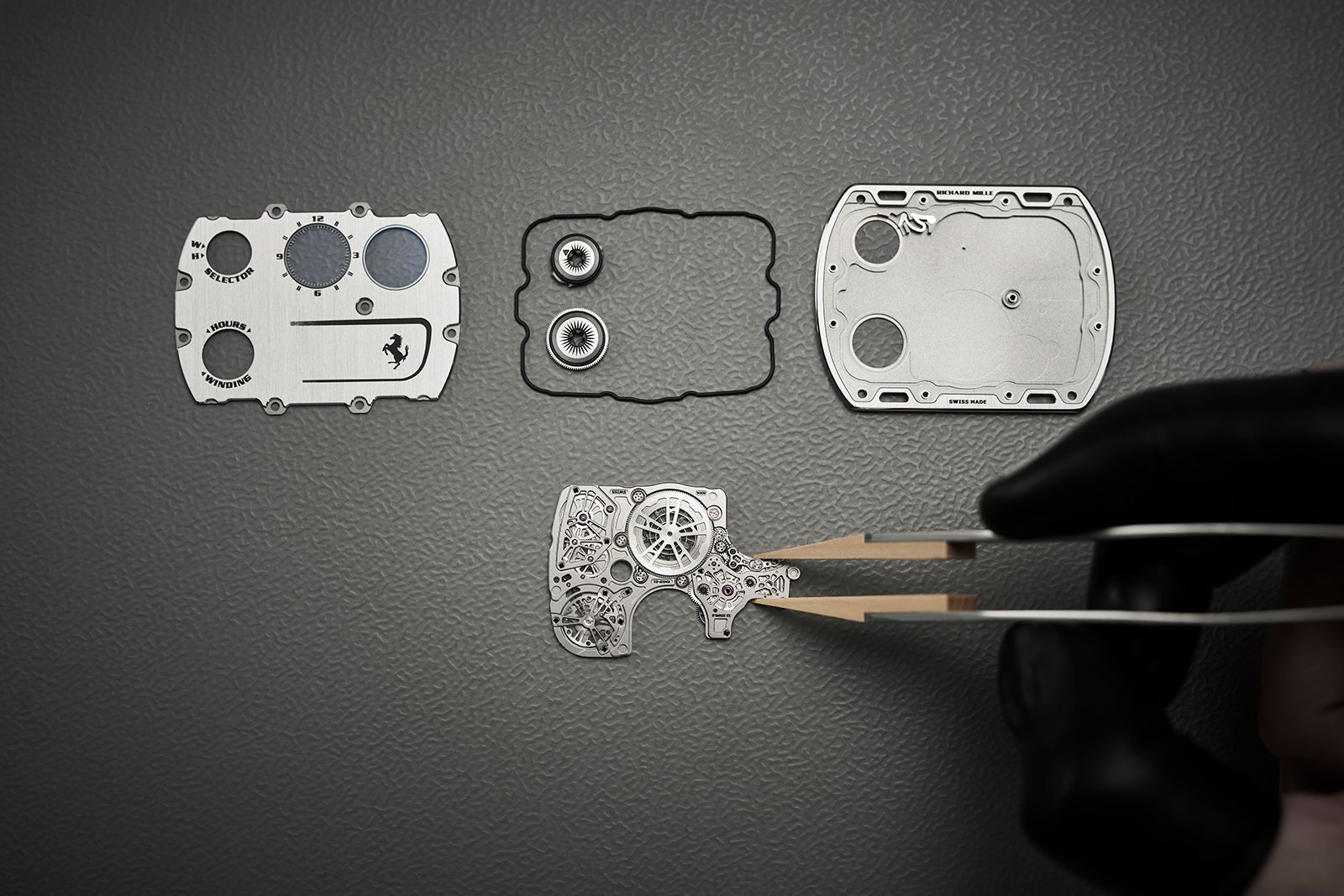 Although the case is sealed with a gasket, it is only water resistant to 10 m due to its thinness as well as the key sockets 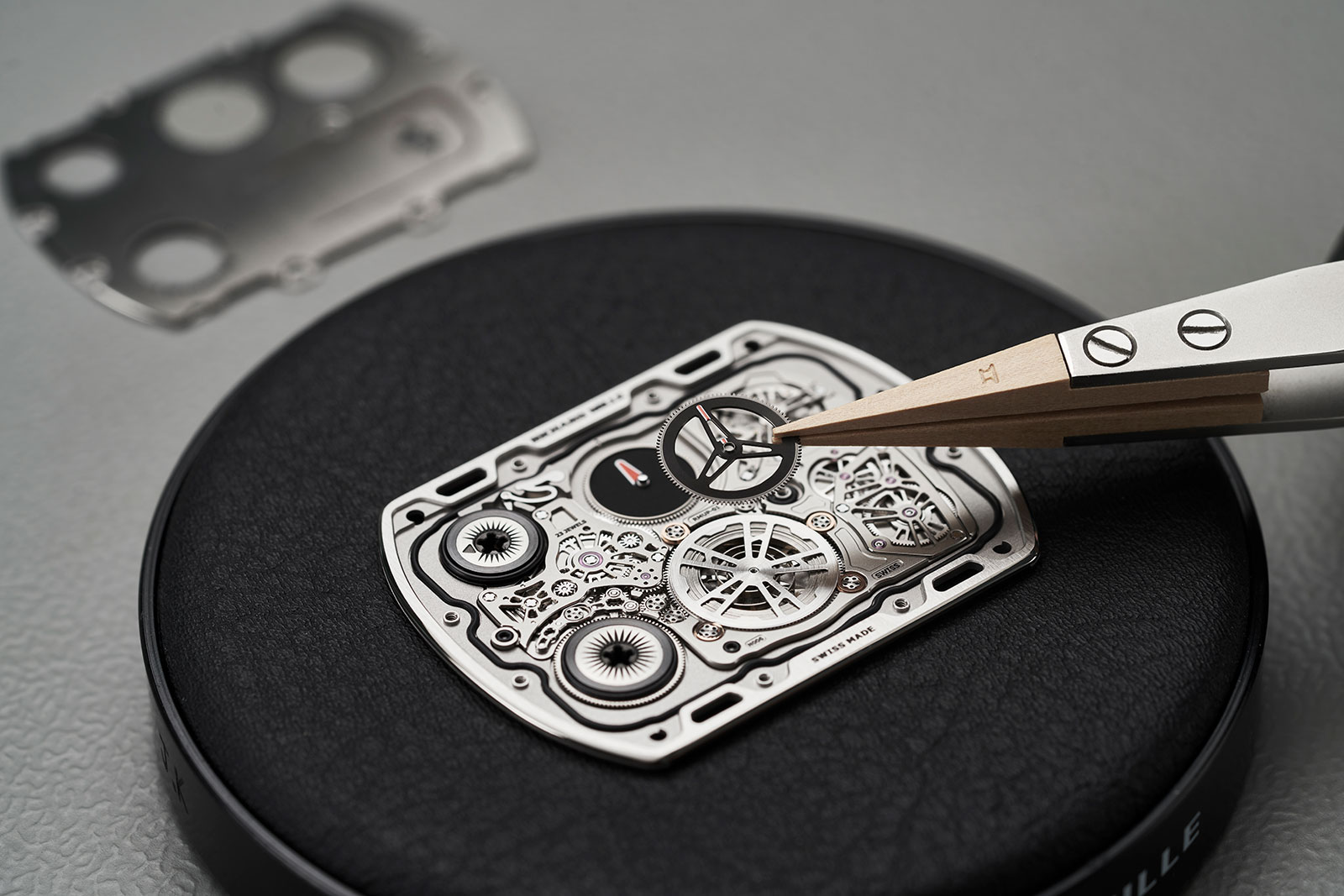 The minute hand is actually the minute wheel The most novel aspect of the movement is the balance assembly and escapement, which were developed with help from Audemars Piguet Le Locle, formerly Renaud & Papi. Largely conventional but extremely flat, the free-sprung balance is secured by a three-armed bridge for stability.

The most innovative element is the escapement, which condenses and flattens the traditional lever escapement. It features a lengthened pallet fork with revamped pallet jewels, allowing for the removal of the guard pins and roller jewel. Despite its simplified part count, the new escapement operates with “the same security as a conventional Swiss anchor escapement” according to Richard Mille.