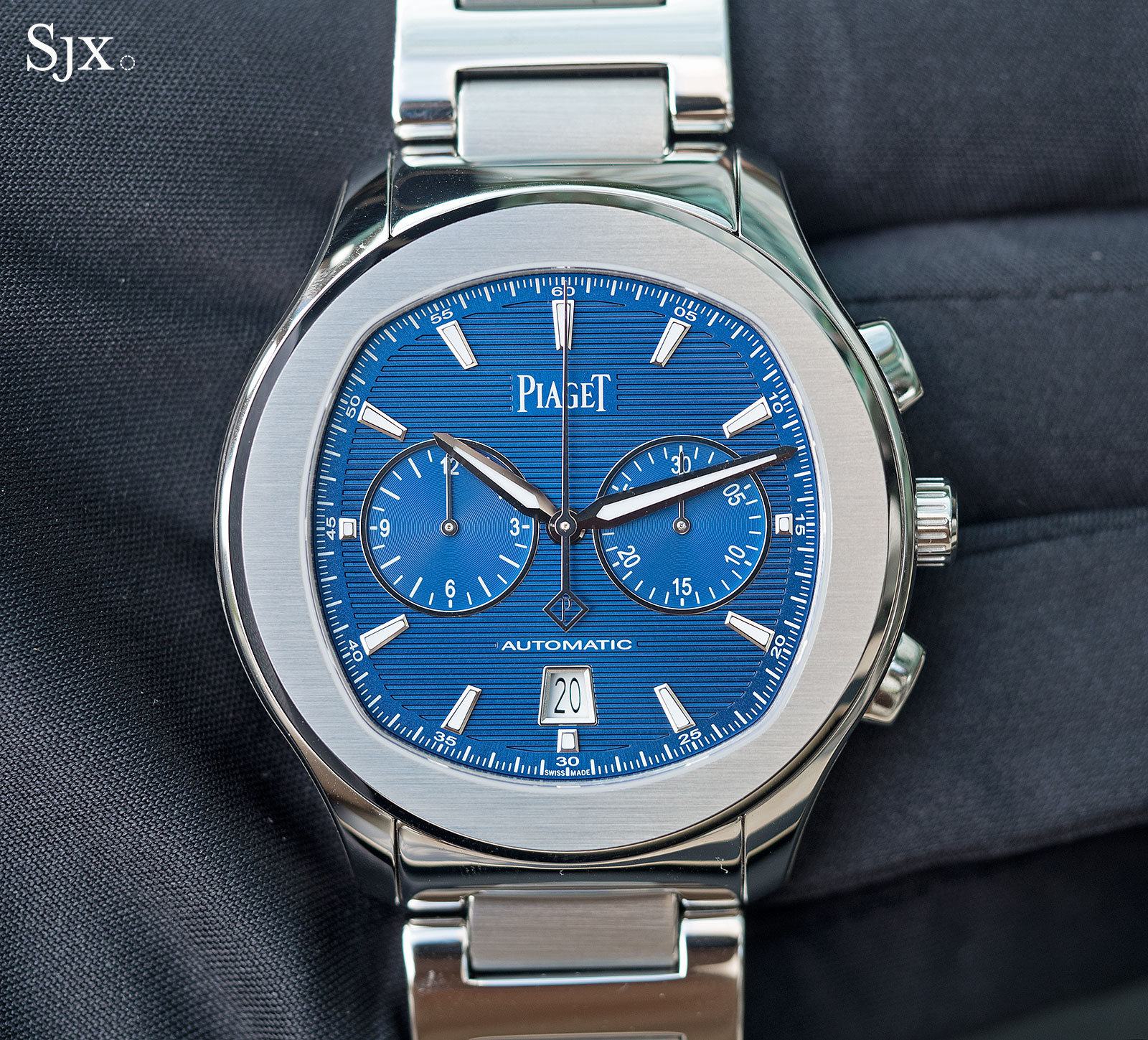 Piaget unveiled the Polo S in July. It was a surprise for most, being an entry-level, but still luxe, sports watch for a brand best known for its ultra-thin watches and jewellery.

The inevitable and inescapable first impression of the Polo S is the resemblance to the Patek Philippe Nautilus and Aquanaut – the striped dial resembles the former while its ovoid bezel resembles the latter. Piaget was widely castigated online for the derivative design, to a degree that almost invited sympathy. But looks aside, how good is the Polo S intrinsically as a wristwatch? On the wrist the Polo S wears well, being modestly sized, with a wide bezel that makes it seem smaller than the 42mm it is.

While both models have the same diameter, the case thickness of each differs: the automatic is 9.4mm high, while the chronograph is 11.4mm. The flat, rather than domed, case back on each helps them feel slimmer than they are. The tactile feel of the watch case is pleasing, being smooth with carefully finished surfaces and edges. While the complexity of the case finish is a step below that of, say the Audemars Piguet Royal Oak, the Polo S does very well for its price point, which is about half that of the basic Royal Oak. On the other hand, the bracelet is more generic in feel, being solid but undistinguished, and fitted with a friction-fit clasp that’s similar to that found on many other watches.

But for all the criticism it attracts, the dial is well executed when examined up close. The stamped horizontal pinstripe motif is neatly done, while the hour markers are bevelled on their edges and applied on the dial. Even the date has an applied window to frame it, though the frosted finish on the bevels gets untidy towards the edge of the window. While the automatic is available in three dial colours, grey, white and blue, the chronograph is only available in white or blue. Of the options, the blue dial is the most striking, but also unfortunately most reminiscent of the Nautilus. Both the automatic and chronograph versions of the Polo S have display backs to show off the respective movements in their entirety. Intriguingly both movements are identical to calibres that Cartier claims as in-house. Piaget, however, notes that both movements inside each Polo S model are derived from other in-house Piaget calibres.

It is likely that the truth is somewhere in-between, and the calibres being a joint effort between various brands of Richemont. That’s a common practice for the luxury conglomerate, which owns both Cartier and Piaget, with several of its brands using movements with identical architecture, but dressed up entirely differently.

Piaget says the calibre 1160P inside the basic time-only Polo S is based on its own 800P, but the movement is recognisable as the Cartier 1904 MC, developed as a versatile, workhorse calibre that’s inside the Tank MC, amongst others. That same movement also doubles as the base for the chronograph movement, which is the 1110P in Piaget parlance, but identical to the Cartier 1904-CH MC (found inside the Tank MC Chronograph for instance). This has all the features typical of a modern, mid- to high-end chronograph, namely a vertical clutch and column wheel. The column wheel inside the 1110P

Nonetheless both movements have been finished in an appealing, albeit mechanical, manner. The look, in fact, is more decorative than the Cartier equivalents, with blued steel screws and prominent bevels on the bridges. For all the opprobrium directed at the watch, the Polo S is actually a timid design. The case shape is mean to evoke the Piaget Emperador Coussin, the cushion-shaped wristwatch that’s usually the case of choice for Piaget’s high-end complications like its minute repeater. But that got lost somewhere along the way, rather early on in the design process in all likelihood. That being said, the design is a striking departure from the Piaget norm of plain dials with stick hour markers and hands, a style only works for formal, extra-thin dress watches. Consequently the look of the Polo S is a nudge in the right direction in the long run, being a useful diversification, a perspective also offered by the chief executive of H. Moser & Cie. in a recent interview with us.

While it looks undistinguished, for what it is the Polo S is fairly priced relative to the competition. The time-only automatic is US$9350 or S$15,500, while the chronograph is US$12,400 or S$20,600. It’s already available from Piaget boutiques and retailers.