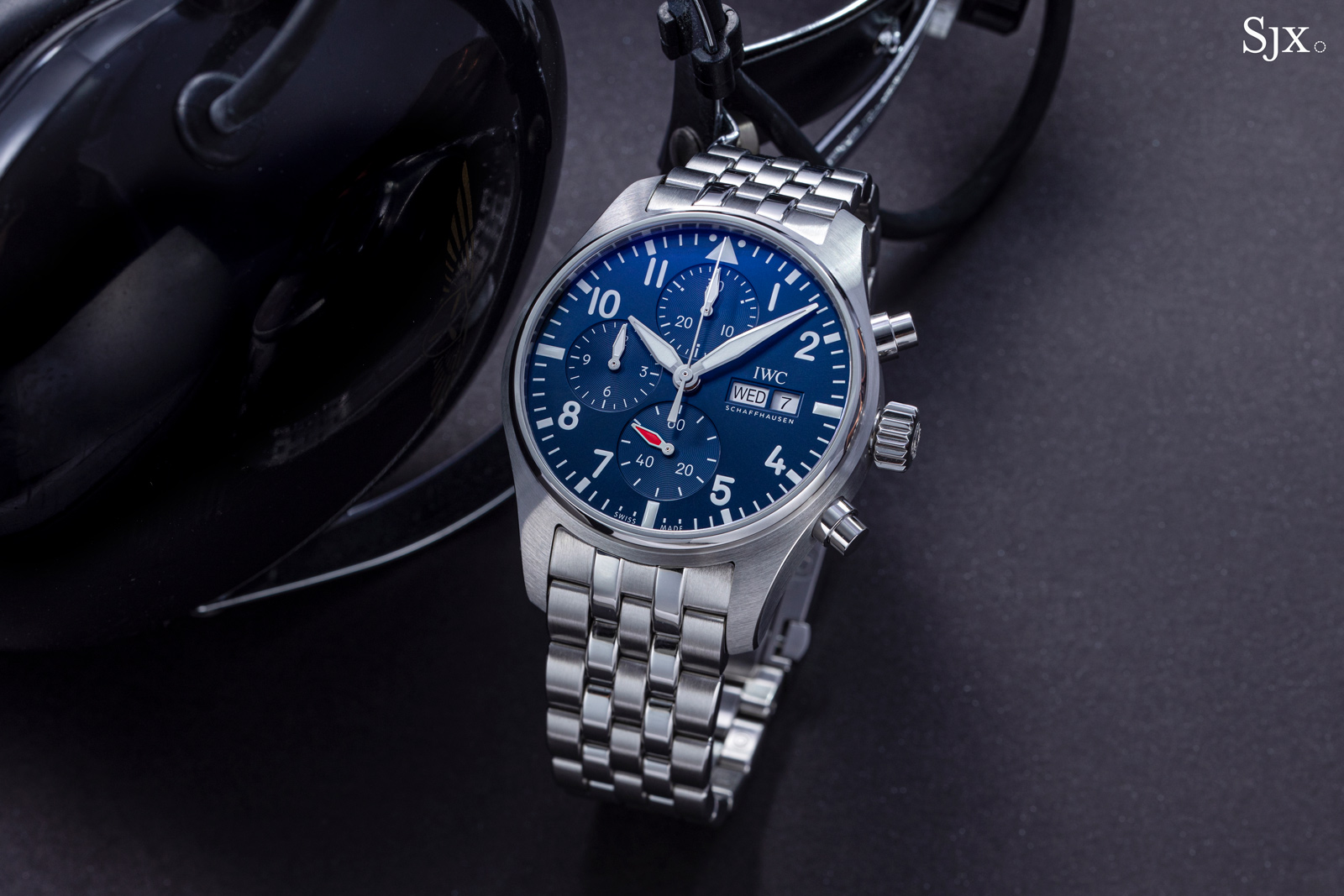 I’m familiar with IWC pilot’s watches, having once owned a Mark XVII, which I bought as the quintessential flieger watch. But the Mark XVII didn’t last too long in my collection because it is very much military-inspired, and I’m not much of a military man, making it hard for me to connect with the design. When I got the chance to test drive the new Pilot’s Watch Chronograph 41 (ref. IW3881) – the latest version of IWC’s longstanding bestseller – I figured it was an opportunity to see if the fliegerchronograph would appeal to me where the time-only Mark XVII did not. 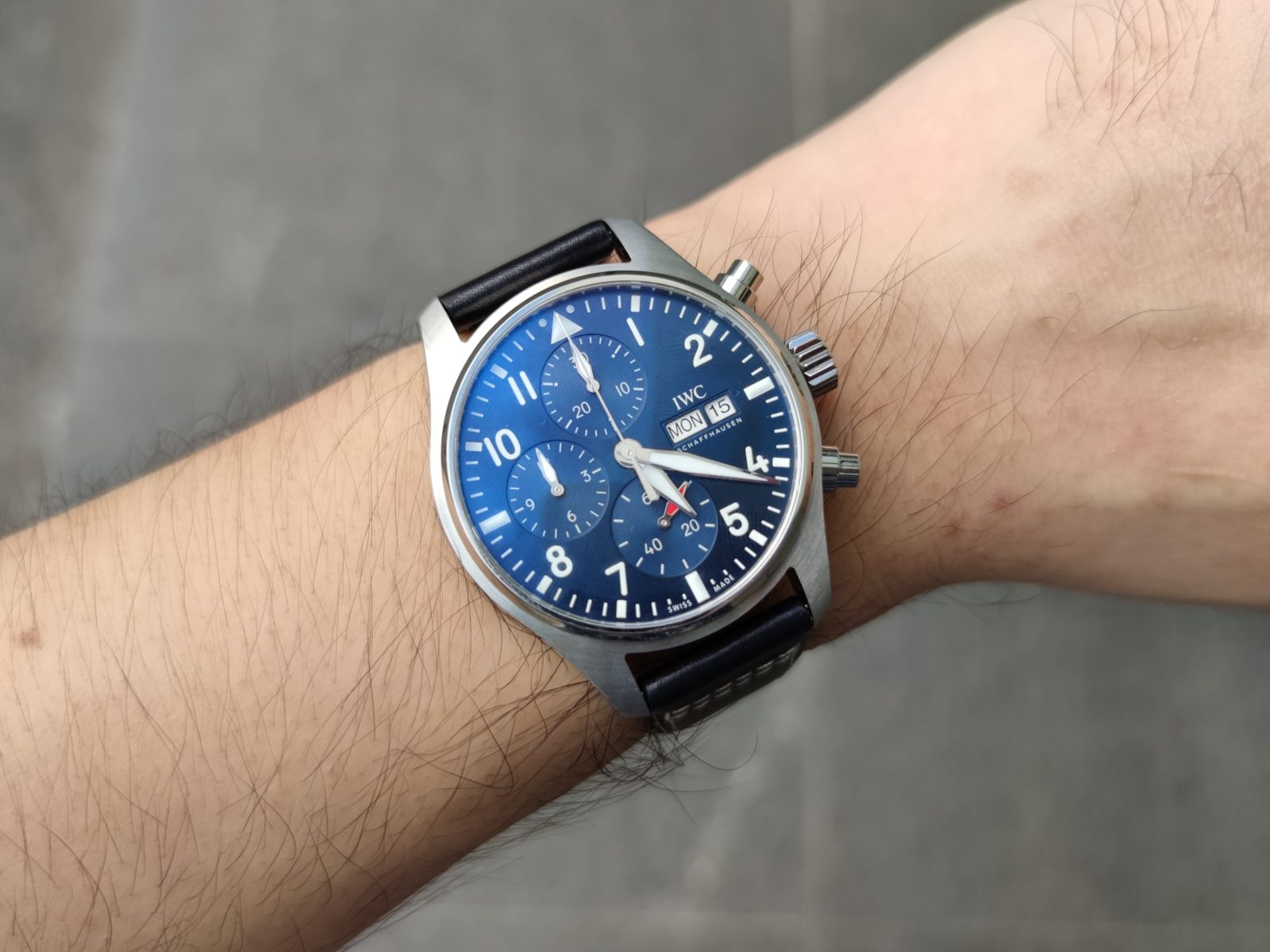 But still, the new chronograph manages to be a whole that’s greater than the sum of its parts. While constituent parts might be similar, but they arguably work better together here than in any prior watch.

I was surprised at how much I liked the watch. For one, the 41 mm case is significantly more wearable than the previous-generation 43 mm case, which I felt was too bulky. On my 7″ wrist, the 41 mm case is substantial but not imposing. The new case also makes the watch more versatile stylistically – the watch felt at home even with more formal outfits, especially when paired with a leather strap. Then there’s the striking blue dial that seems to be identical to that on the “Le Petit Prince” chronograph. The colour and sunburst finish give the dial a lively appearance that sets it apart from the typical IWC pilot’s watches, which are mostly serious-looking, “tool” watches. In hindsight, that was probably why I didn’t vibe with the utilitarian Mark XVII; I prefer my watches to have some visual flair. The new Pilot’s Watch Chronograph 41 has flair, especially with the blue dial. While there’s also a green variant available, I find its colour a bit too faddish – it is just one of many green-dial watches this year – given that an aviator’s watch usually more classic and unchanging in style. The blue dial is very much a Goldilocks aesthetic – just right in being more eye-catching than the usual black dials, but not overly modish like its green counterpart. 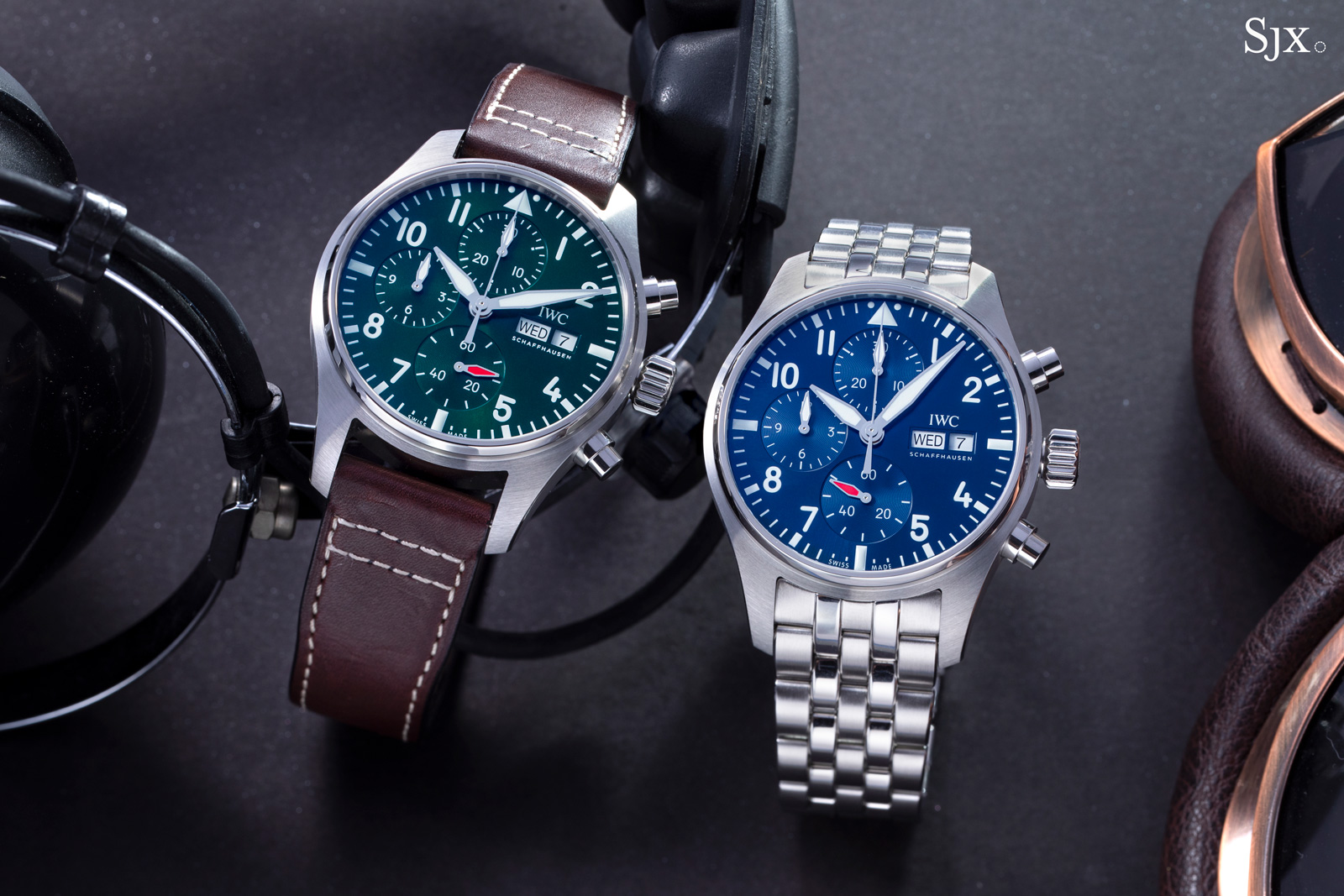 But the new Pilot’s Watch Chronograph is more than just a new colour and size. Its most substantive change is the in-house cal. 69385, instead of the Valjoux 7750 found in previous iterations of the Pilot’s Watch Chronograph. Developed in-house by IWC, the cal. 69385 is a robust workhorse calibre of the very sort that should be in a pilot’s watch, but also has refinements like a column wheel and skeletonised escape wheel. More than the sum of its parts

Now the house style for all its Pilot’s watches, the dial design is essentially a modern take on the dial found inside the beobachtungsuhr, or “navigation watch”, that IWC made for the second world war German Air air force. Though it includes all the elements found on the vintage original, they have all been made slightly gentler – the lozenge hands are rounder and less aggressively shaped – or more civilian friendly, in other words.

As a result, the new Pilot’s Watch Chronograph feels like a movie we’ve seen before – the dial is virtually identical to the “Le Petit Prince” Pilot’s Watch Chronograph, except for the position of the seconds sub-dial that’s been moved from nine to six o’clock as a result of the new movement. The relocated seconds at six has a red hand – a smart, functional detail that clearly differentiates it from the totaliser counters. 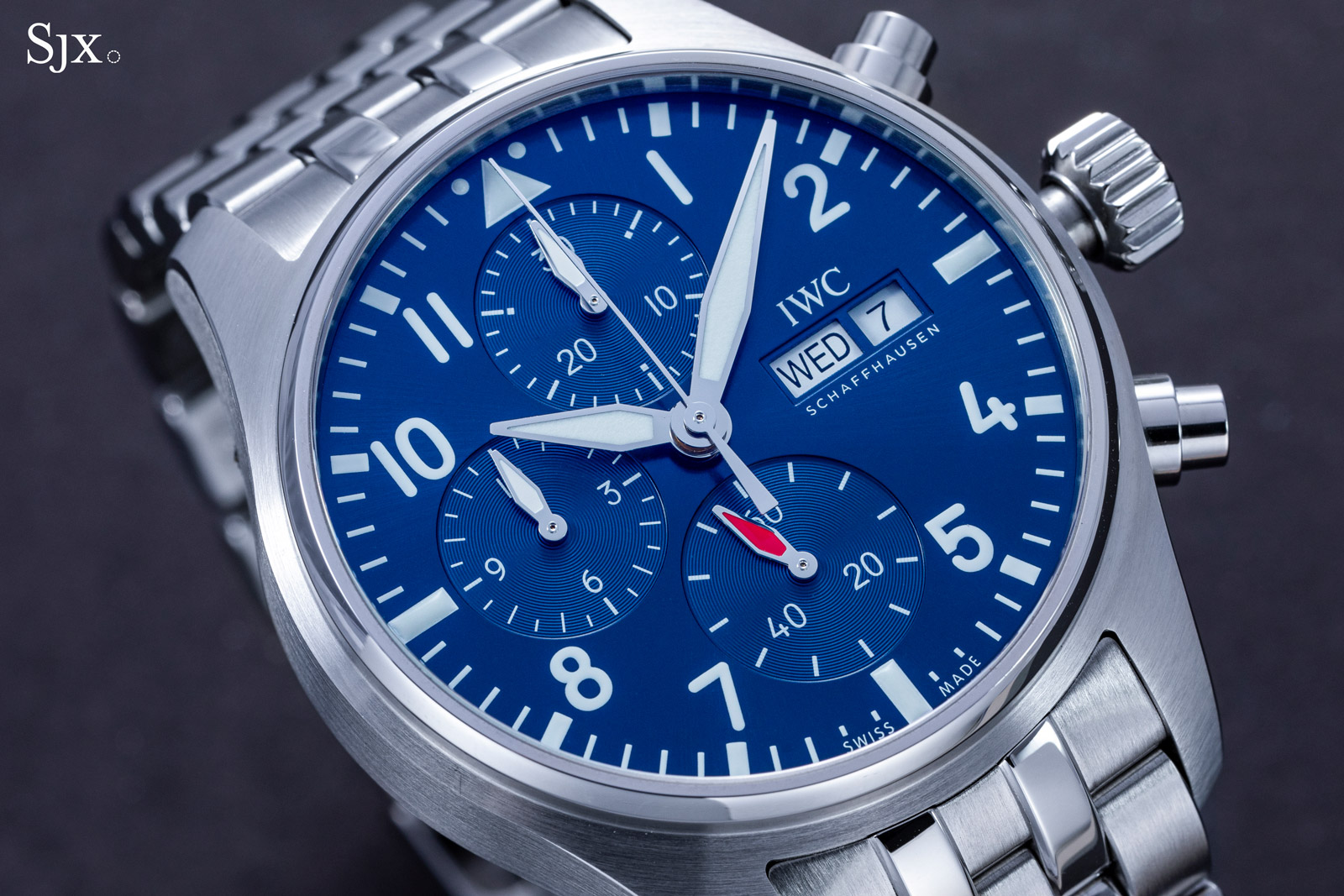 Up close, the dial of the Pilot’s Watch Chronograph 41 is neatly finished. Every element is properly executed, as you would expect for a high-quality watch at this price, but simply and without any flourish. The printed indices and markers are precise, while the hands are cleanly polished. And the day-date windows are slightly recessed with stepped borders and rounded corners.

If there’s one element I would improve, it’s the calendar. Both the day and date are on white discs, which are jarring against the dial colour. The calendar is not a crucial bit of information, so having the twin discs in blue to blend into the dial doesn’t affect the day-to-day usefulness of the watch. 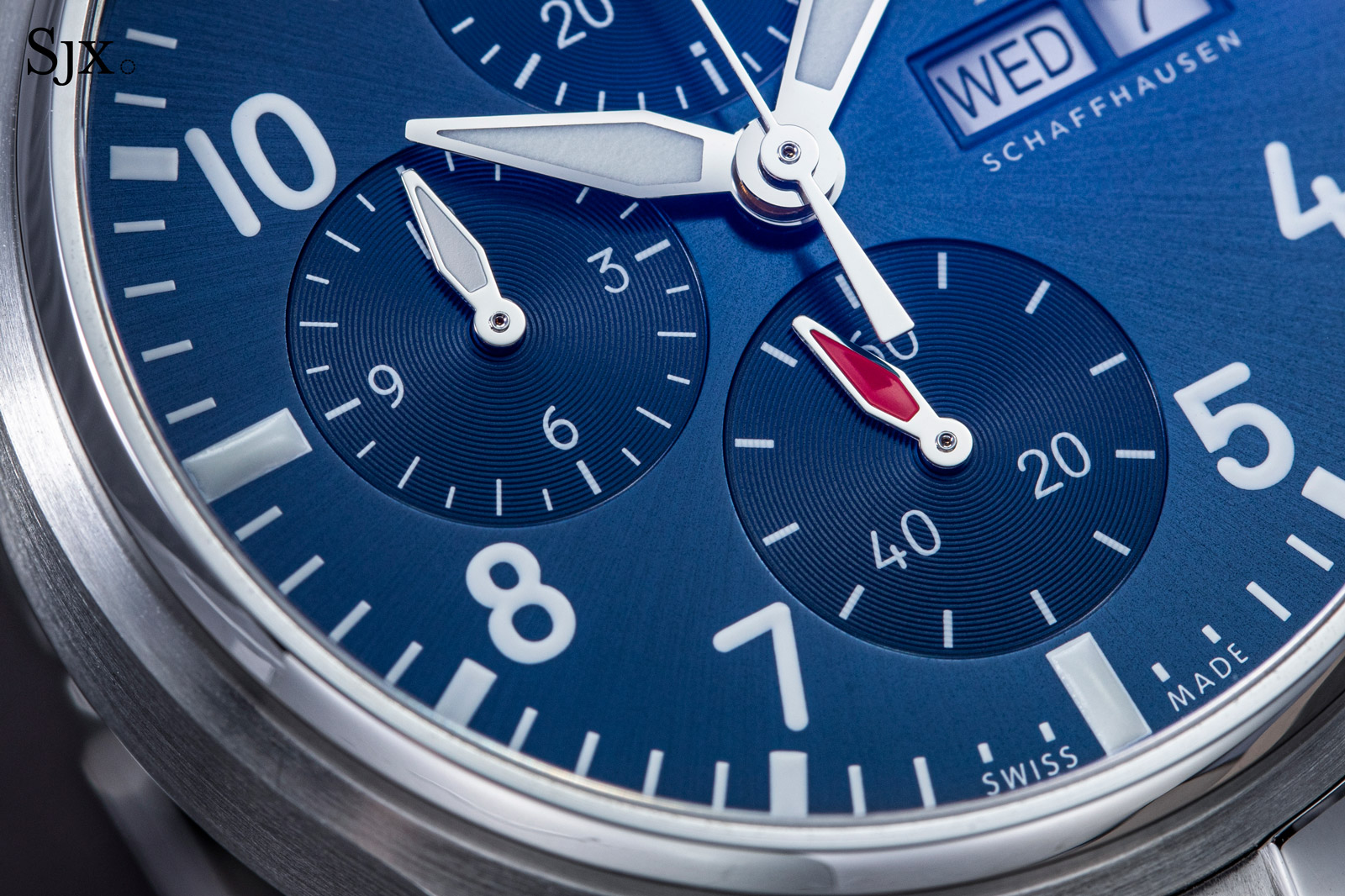 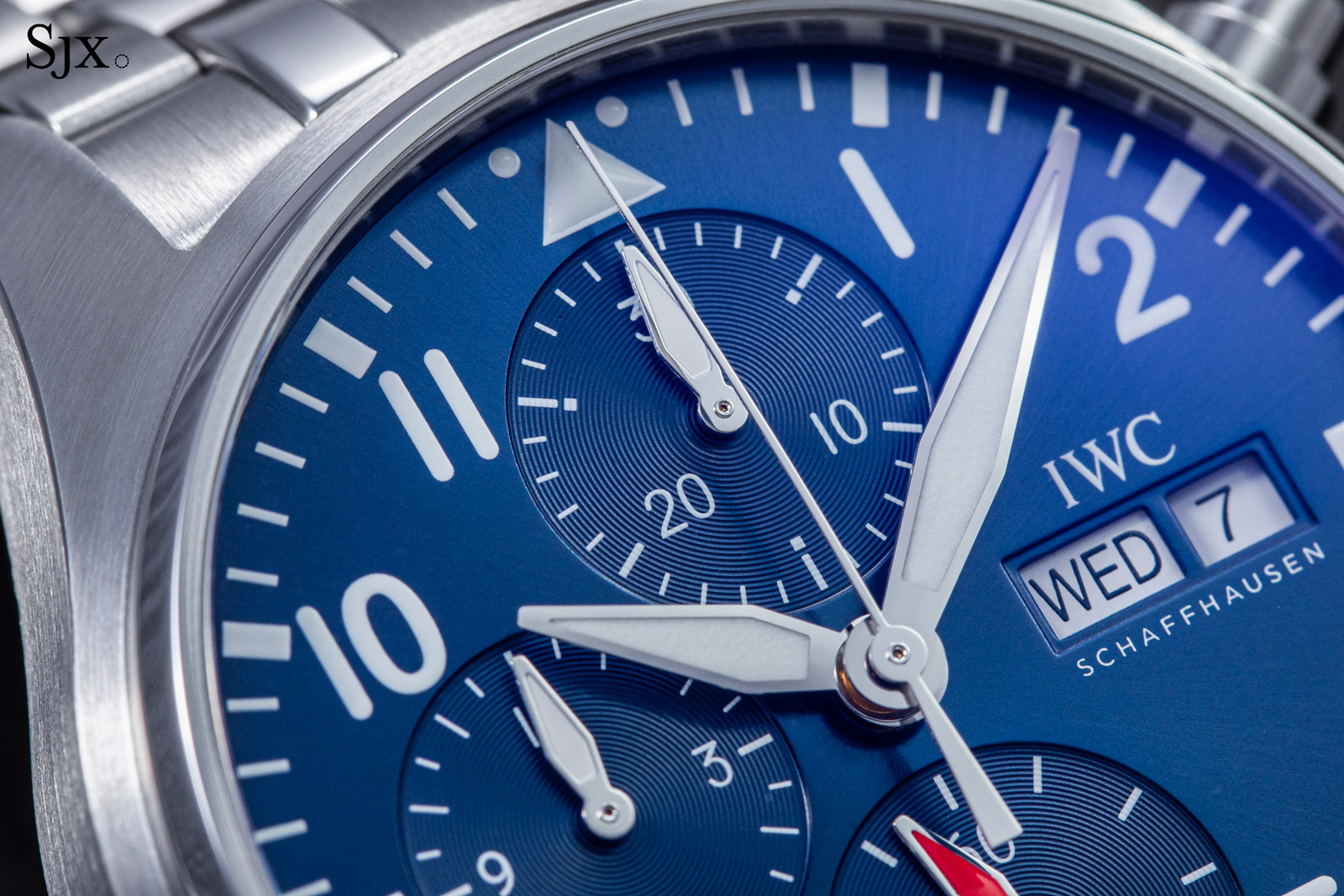 IWC’s aviation watches have historically possessed excellent cases and this continues that tradition. In fact, the case design is almost identical to that of the first-generation ref. 3706 Fliegerchronograph.

The case is similarly finished well, perhaps a step above the quality of the dial. It has a fine brushed finish that reflects the utilitarian heritage of the watch, but the polished bevels on the lugs and bezel add a bit of refinement.

Where the case can be improved is practically invisible. Because the bezel and case middle are one piece, the border between bezel and case is soft and probably the only ill-defined detail of the case. 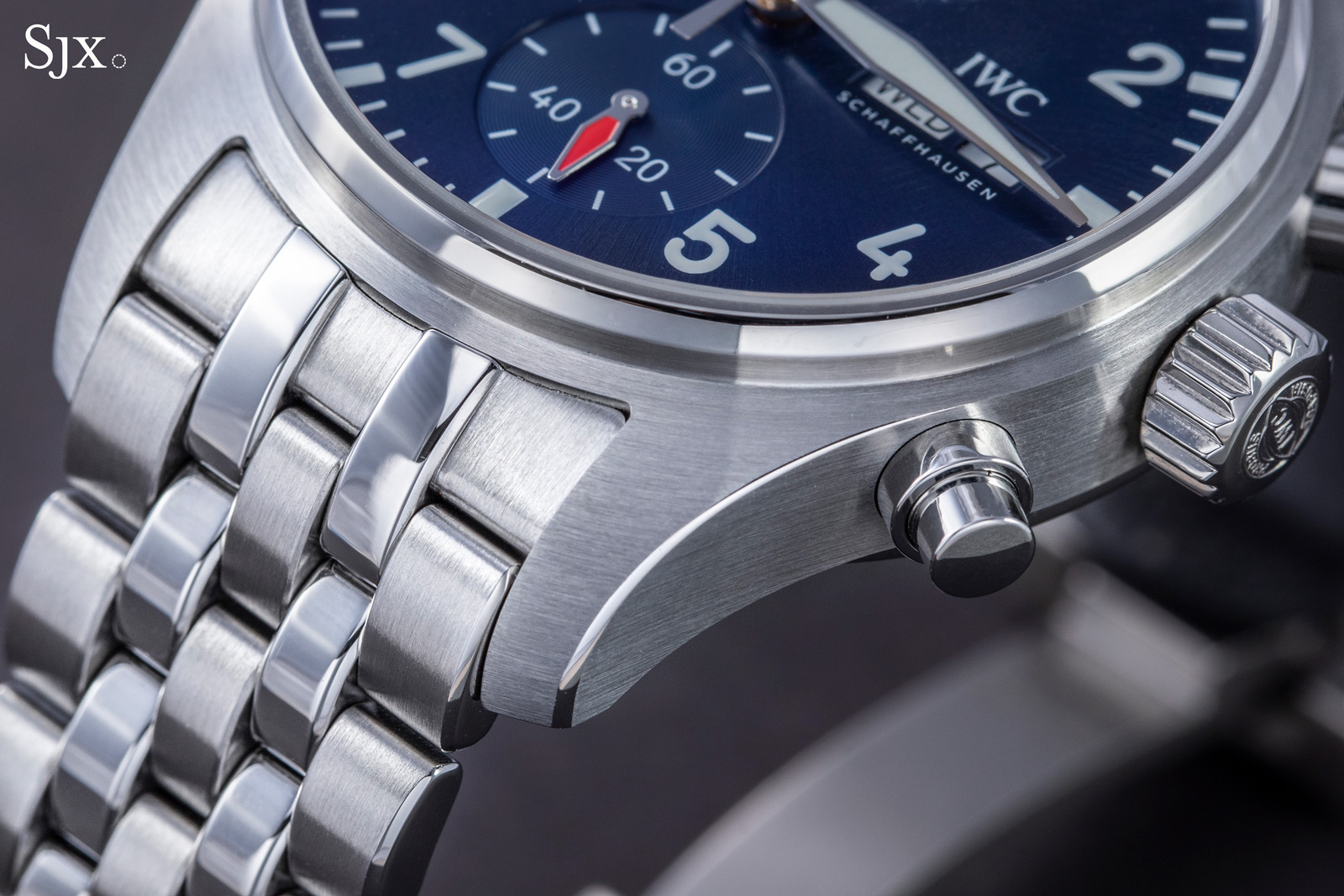 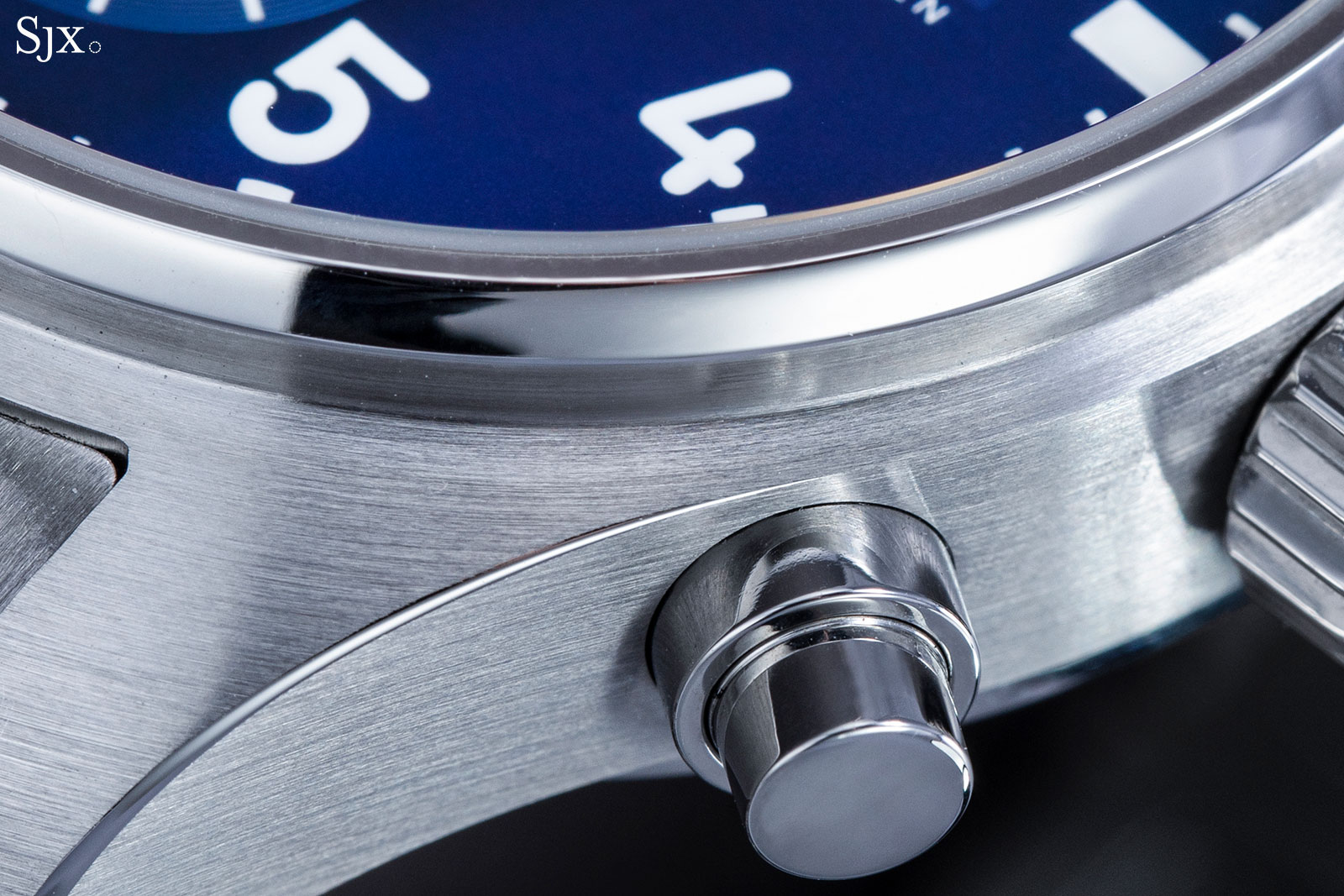 Between bezel and case

Along with the case size, the thickness of the watch has also been reduced. It’s still a thick watch, but now stands 14.5 mm high, almost a full millimetre thinner than the previous generation Pilot’s Watch Chronograph. The slimmer and smaller case results in a significantly improved wearing experience. 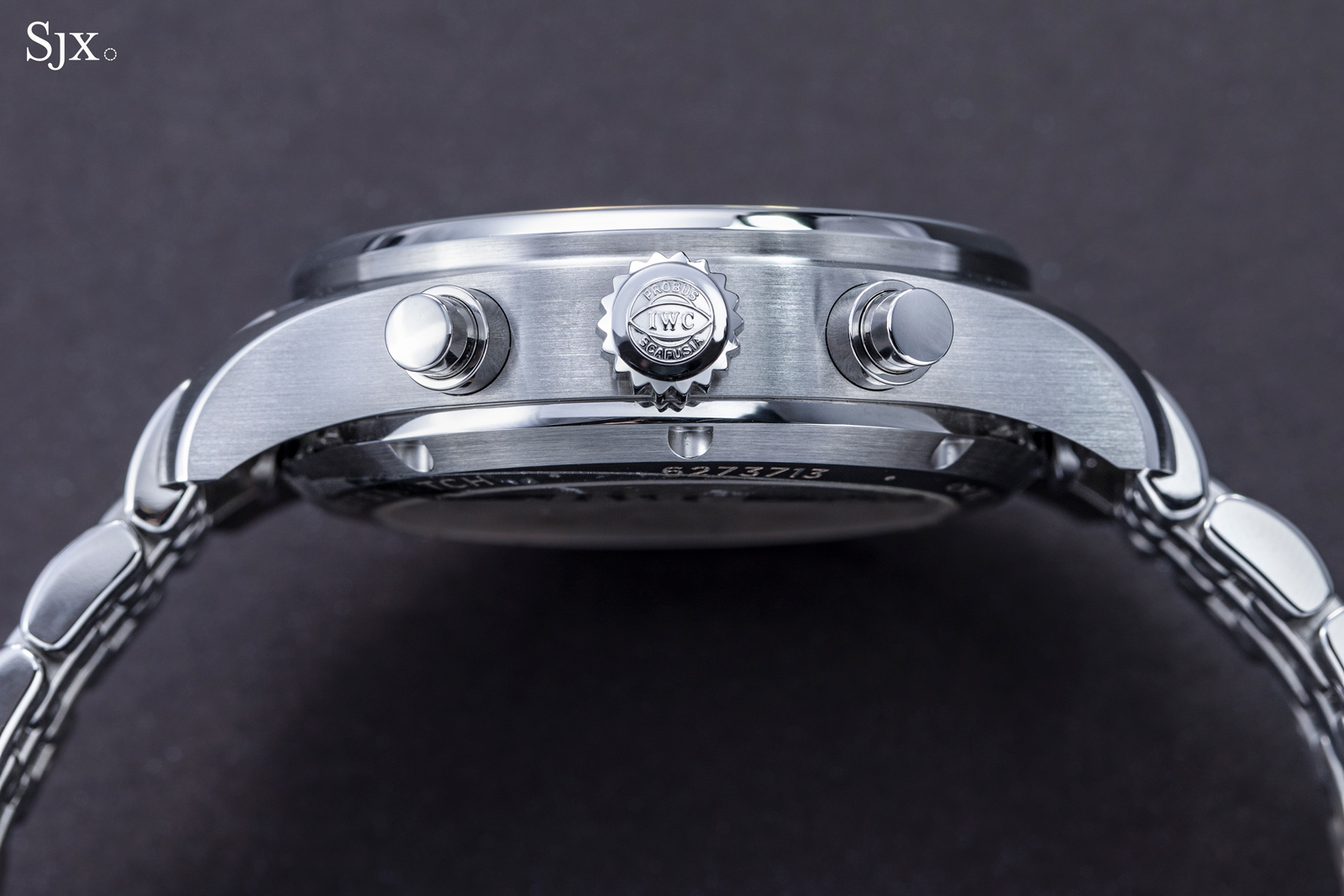 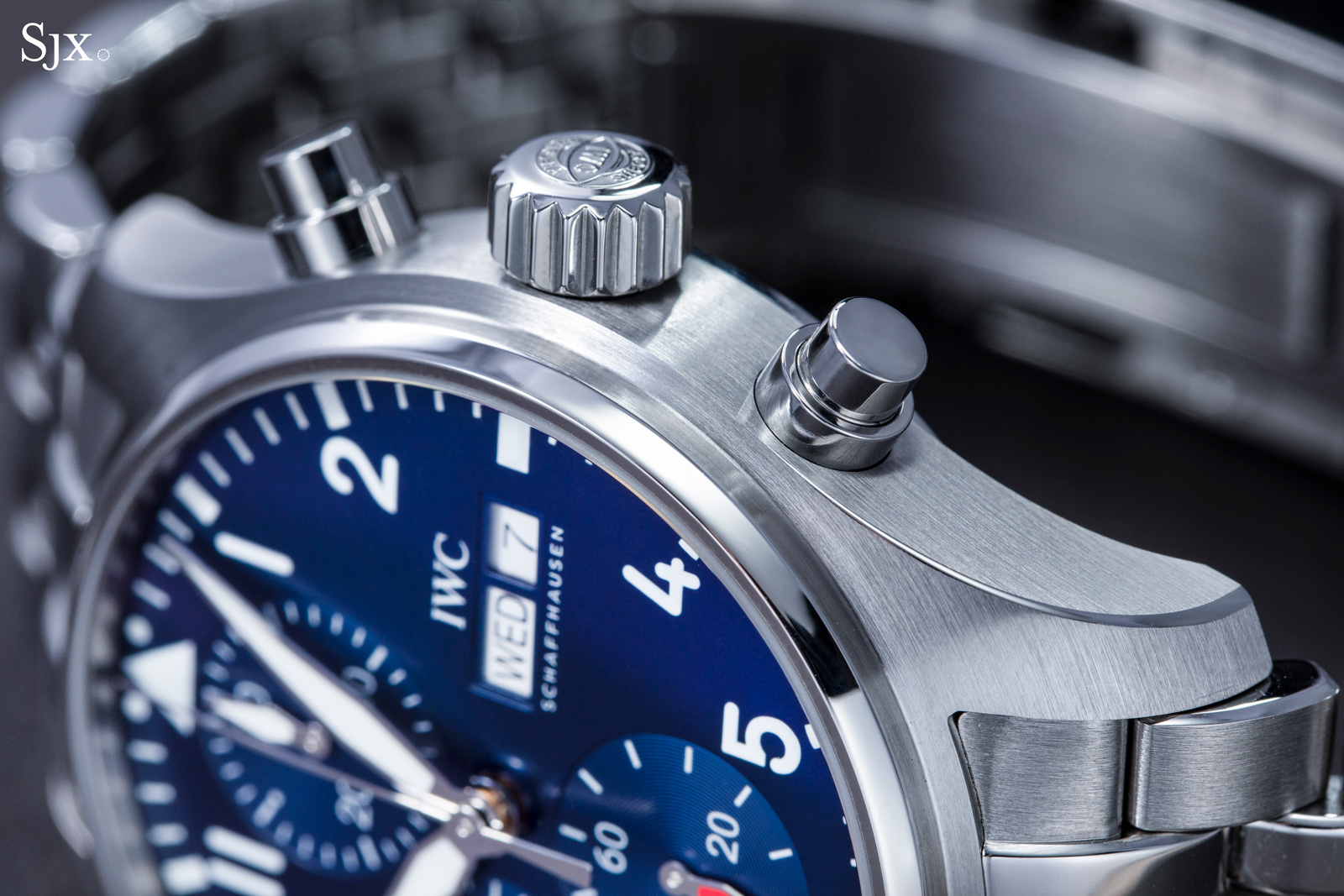 As is standard for most of its Pilot’s Watch line, the chronograph can be had on either a bracelet or leather strap.

While the quality of the bracelet matches the case, its design isn’t the best. The alternating brushed and polished links of different widths give it somewhat of a dated appearance that doesn’t go with the no-nonsense style of a pilot’s watch. 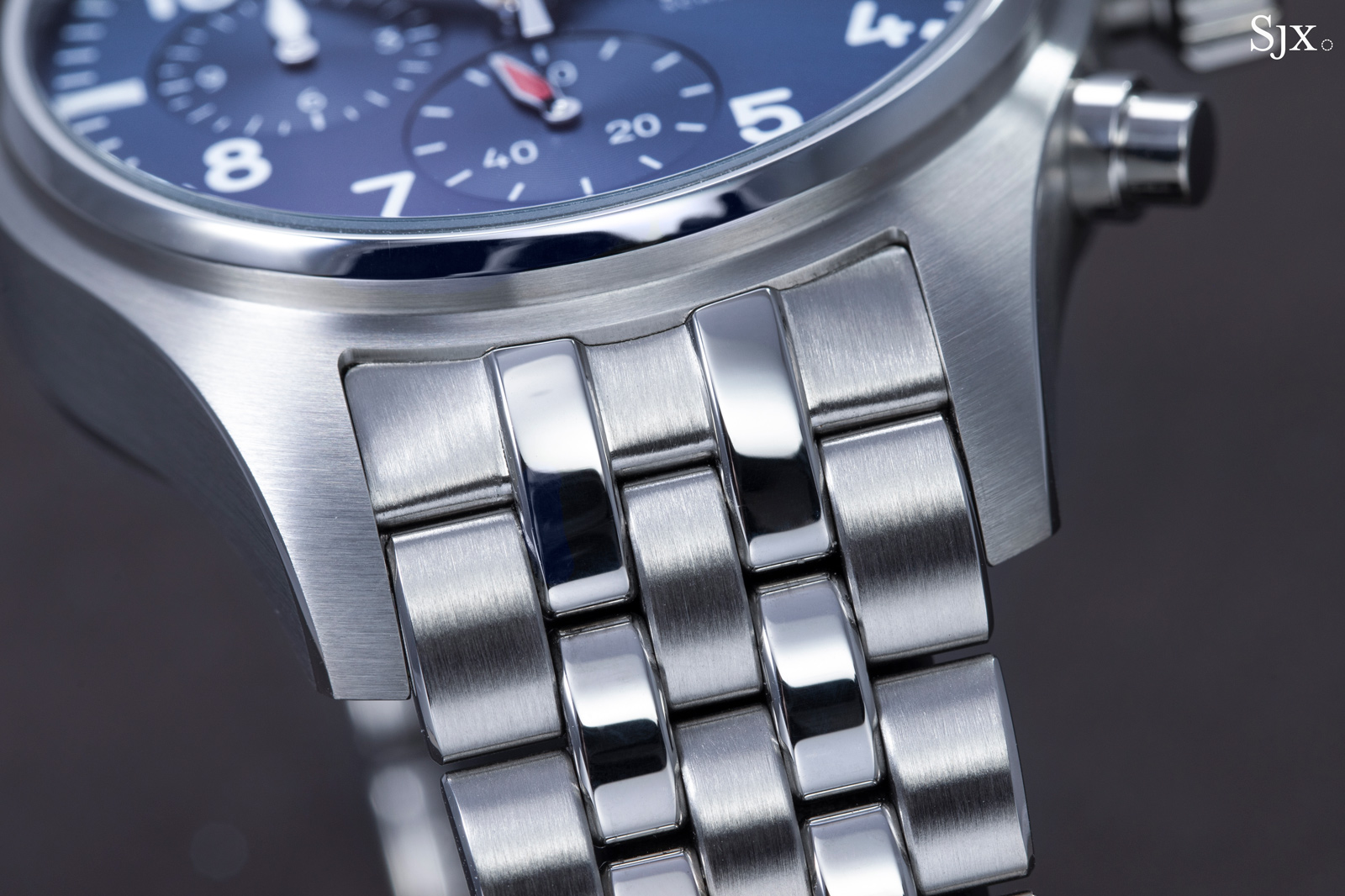 Alternating finishing on the five-link bracelet

The watch feels more robust on a steel bracelet, but I find the blue strap complements the dial better and wore the watch mostly on the strap.

However, the Pilot’s Watch Chronograph features IWC’s EasX-CHANGE, allowing easy swapping of straps without any tools. Unlike many proprietary quick-release system, it’s a simple mechanism, essentially a lever that retracts the springs bars. Though not fancy, it is highly functional.

Being easy to exchange between the two, I would recommend getting the watch with the bracelet, and then buying a strap (it’s more cost efficient than buying the bracelet separately) to go along for different situations. 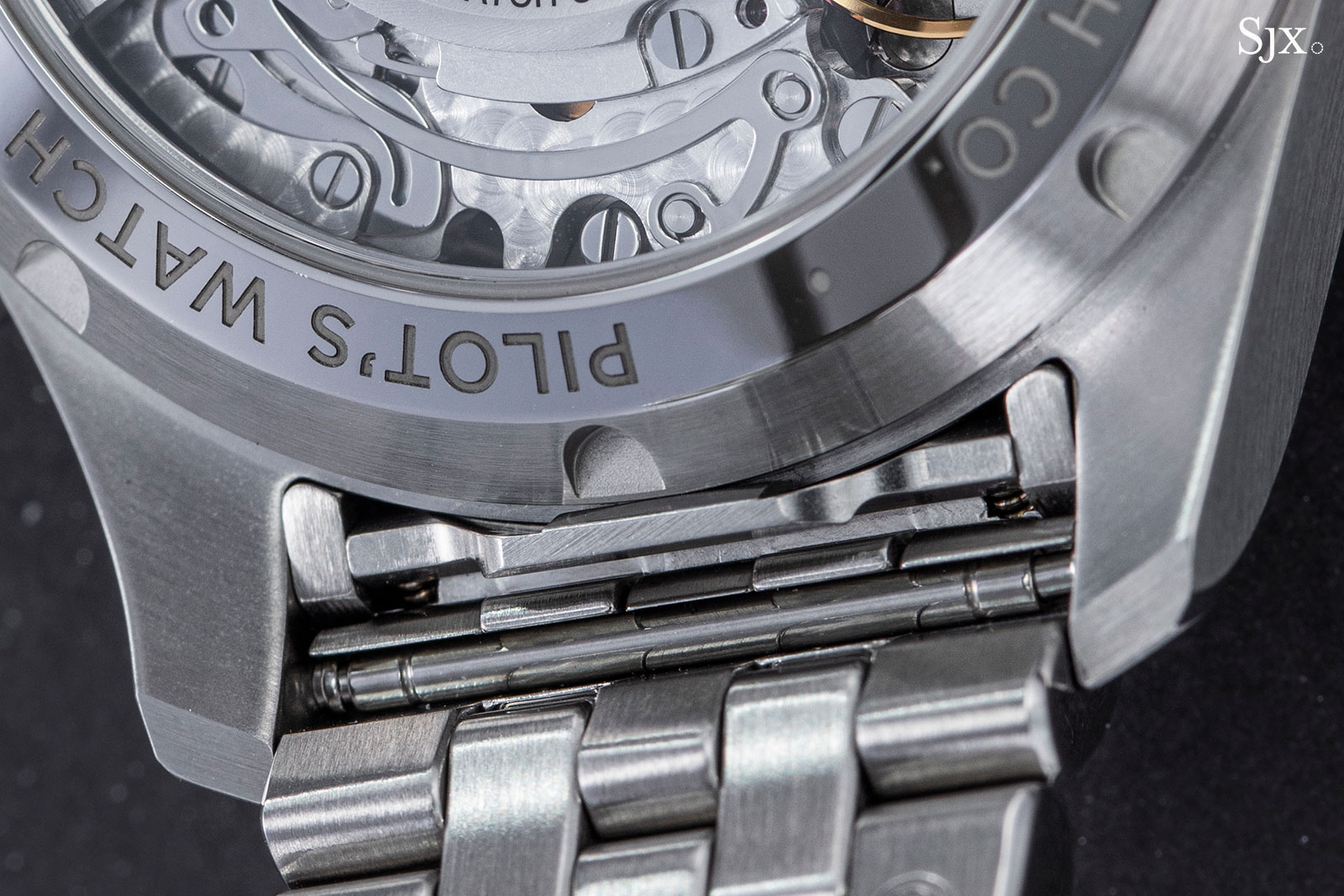 Lastly, I’m also heartened to see that IWC has finally bestowed an in-house movement on its most popular chronograph. One of the less obvious features of the cal. 69385 are the skeletonised escape wheel and pallet lever that operate more efficiently due to their lightness

The use of the cal. 69385 is part of IWC’s ongoing efforts to equip most of its offerings with in-house movements. It ensures the Pilot’s Watch Chronograph is a better value proposition than its predecessors, because the cal. 69385 is an arguably superior movement in terms of technical features. With a column wheel to control the start-stop-reset functions, the cal. 69385 has sharper pusher feel than the Valjoux 7750.

While servicing costs may be slightly higher since the cal. 69385 is a slightly fancier movement, as a watch enthusiast I appreciate the in-house movement as compared to an off-the-shelf alternative.

[If you want to know more about the movement, we explored the cal. 69000 family of movements in greater detail in our review of the IWC Portugieser Chronograph ref. 3716.] The movement is also finished with Geneva striping and perlage 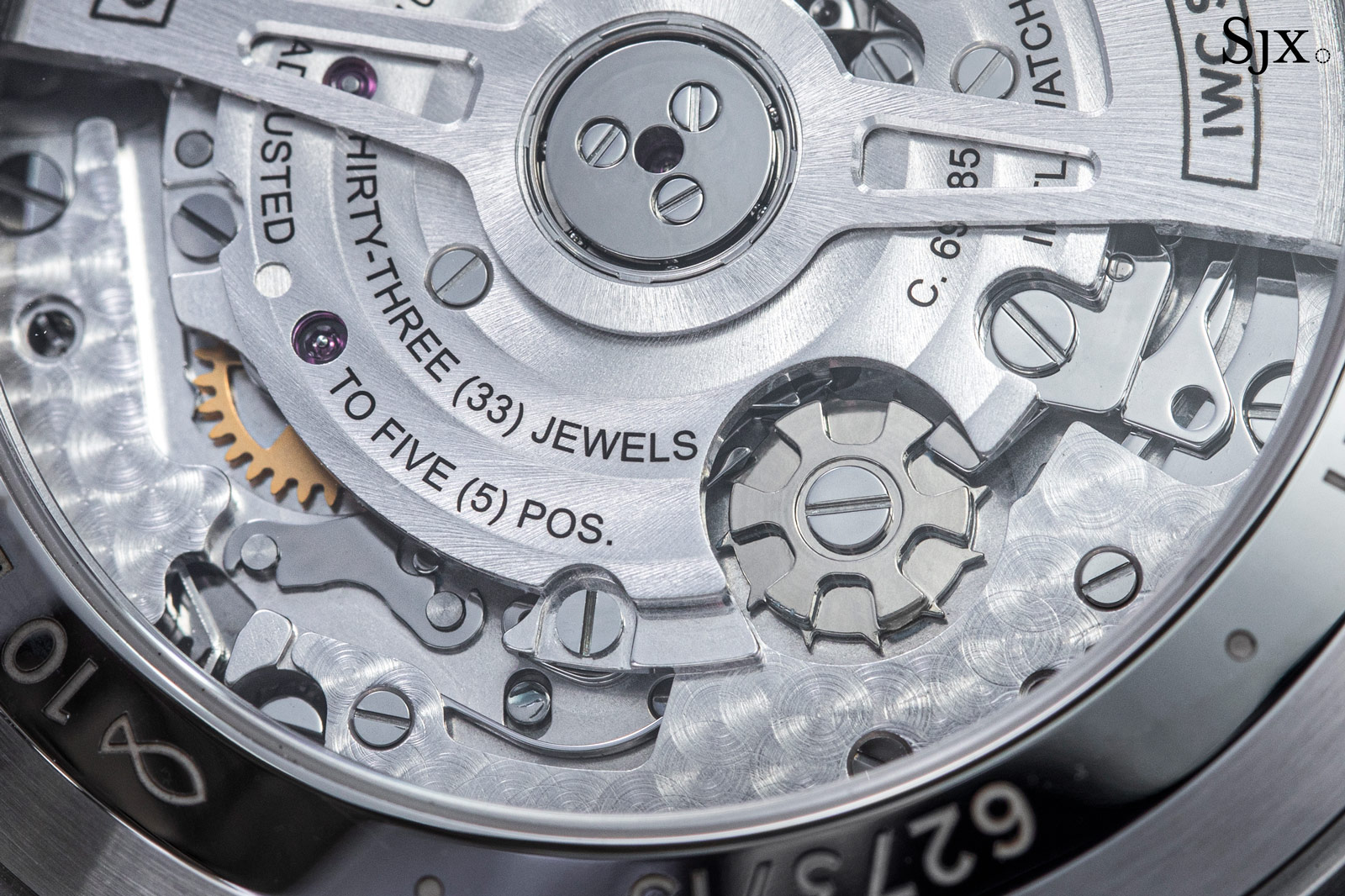 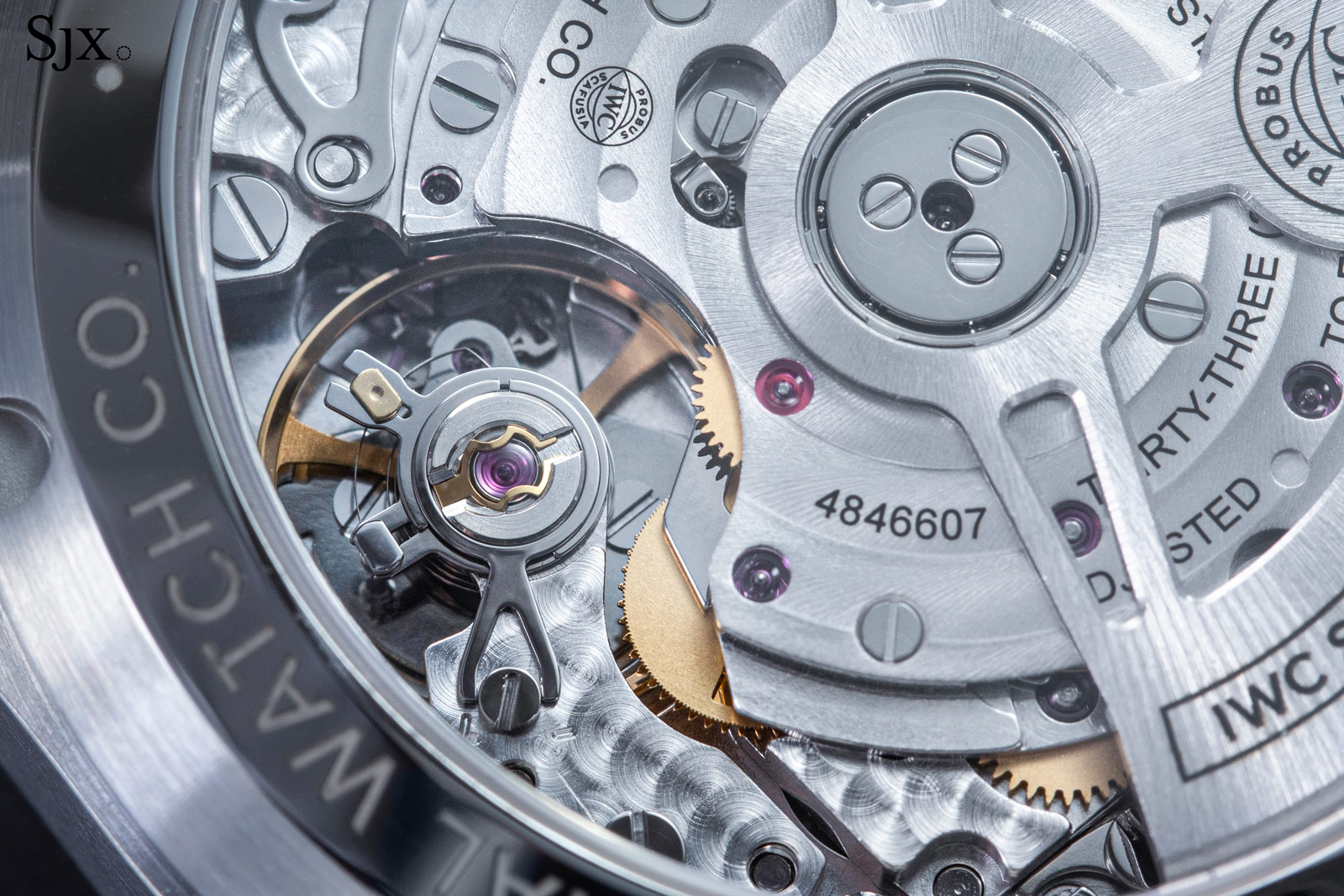 Though in house, the movement retains the Etachron regulator of the 7750, which is a practical solution though not the best looking

And in a first for an IWC Pilot’s Watch, the movement can be admired via a sapphire case back. The movement is dressed up with Côtes de Genève and perlage. While not as beautiful to behold as a high-end, manual-winding chronograph movement, it is nonetheless a pleasing sight.

The open back does bring with it a minor drawback. Historically, the brand’s aviator’s watches had solid backs with a soft-iron cage underneath to protect the movement from magnetism. Now that’s been replaced by a soft-iron ring around the movement, making a display back possible. The downside is reduced magnetism resistance, but that has no practical implications for the typical wearer, and definitely none for me.

The Pilot’s Watch Chronograph 41 is one of my favourite releases at this year’s Watches & Wonders. Although derivative in design, the watch is arguably the best recent iteration of the IWC aviator’s chronograph, especially with its more wearable size and the in-house, column-wheel movement. Sometimes, only slight adjustments to a winning formula are all that’s needed for perfection, or at least near perfection.

In other words, the Pilot’s Watch Chronograph is perhaps the pilot chronograph for those seeking something with the traditional aviator’s watch style but in a more manageable size.