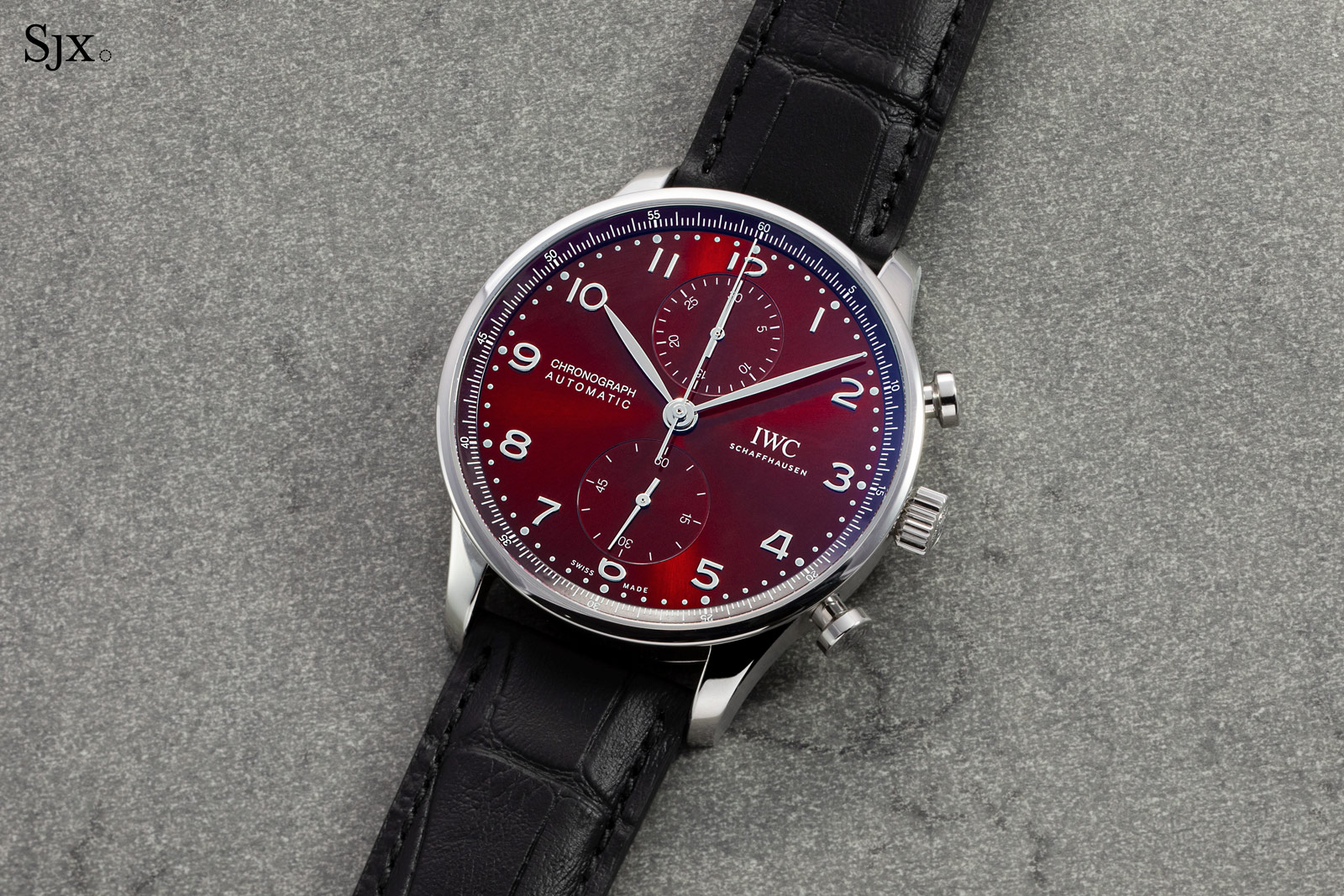 Launched three years after the Portugieser rattrapante chronograph of 1995, the first-generation Portugieser Chronograph ref. 3714 combined straightforward good looks, excellent dimensions and an affordable price. Unsurprisingly it was resoundingly popular, and a bestseller for over 20 years.

Apart from an upmarket spin-off, the ref. 3903 with the in-house cal. 89361 – that was not quite a success due to a size and price – the ref. 3714 remained virtually unchanged since inception except for a new dial colour every so often. The movement within also remained the same over its two-decade production run – the cal. 79350, a gently upgraded Valjoux 7750.

Then in 2018, IWC offered the first glimpse of the future when the brand celebrated its 150th anniversary. Amongst the commemorative editions was the Portugieser Chronograph Edition 150 Years ref. 3716, near identical to the ref. 3714 but powered by the in-house cal. 69355. Now the Portugieser Chronograph 3716 has officially joined the catalogue as a regular-production model, replacing the venerable ref. 3714. 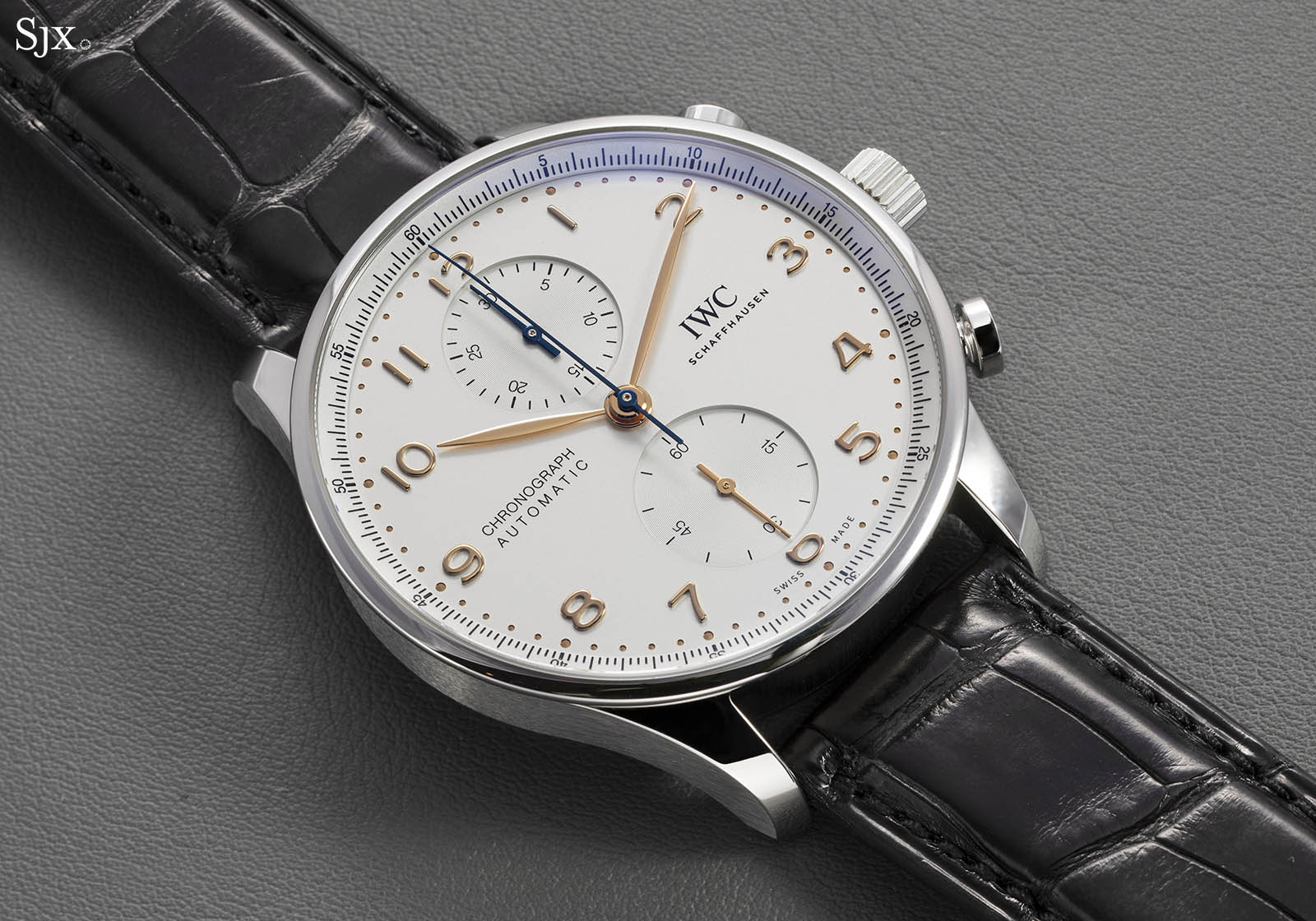 The ref. 3716 in the classic gold-on-silver guise 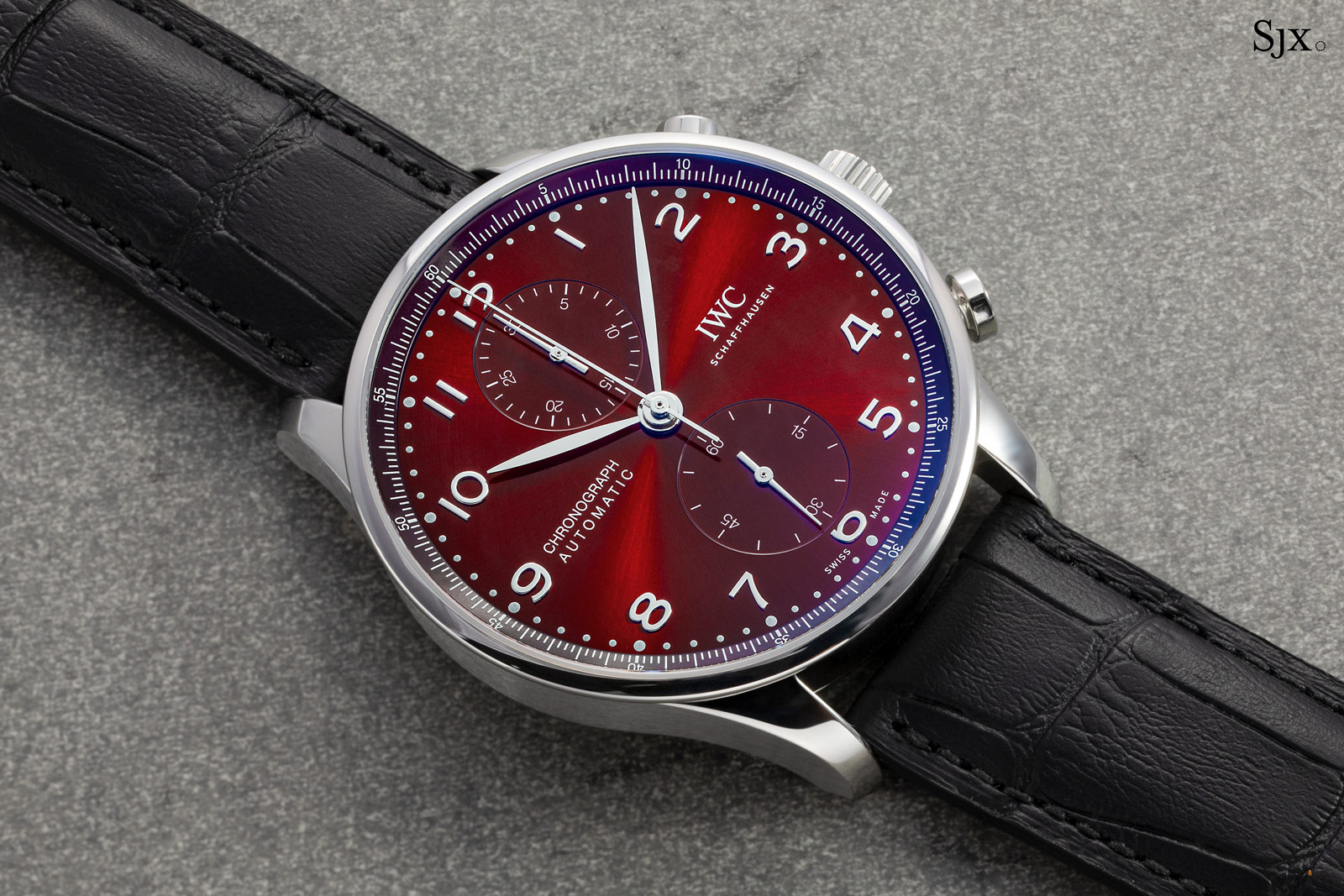 The new Portugieser Chronograph ref. 3716 is essentially a ref. 3714 with a superior, in-house movement. If you liked the original, you will definitely like the ref. 3716.

Importantly, the ref. 3716 6 is a good value proposition. It’s priced at less than 5% over the original, a modest and entirely reasonable increase. In fact, the ref. 3716 offers much better value than the original, which, after numerous price hikes over two decades, ended up fairly pricey for a 7750-based watch. 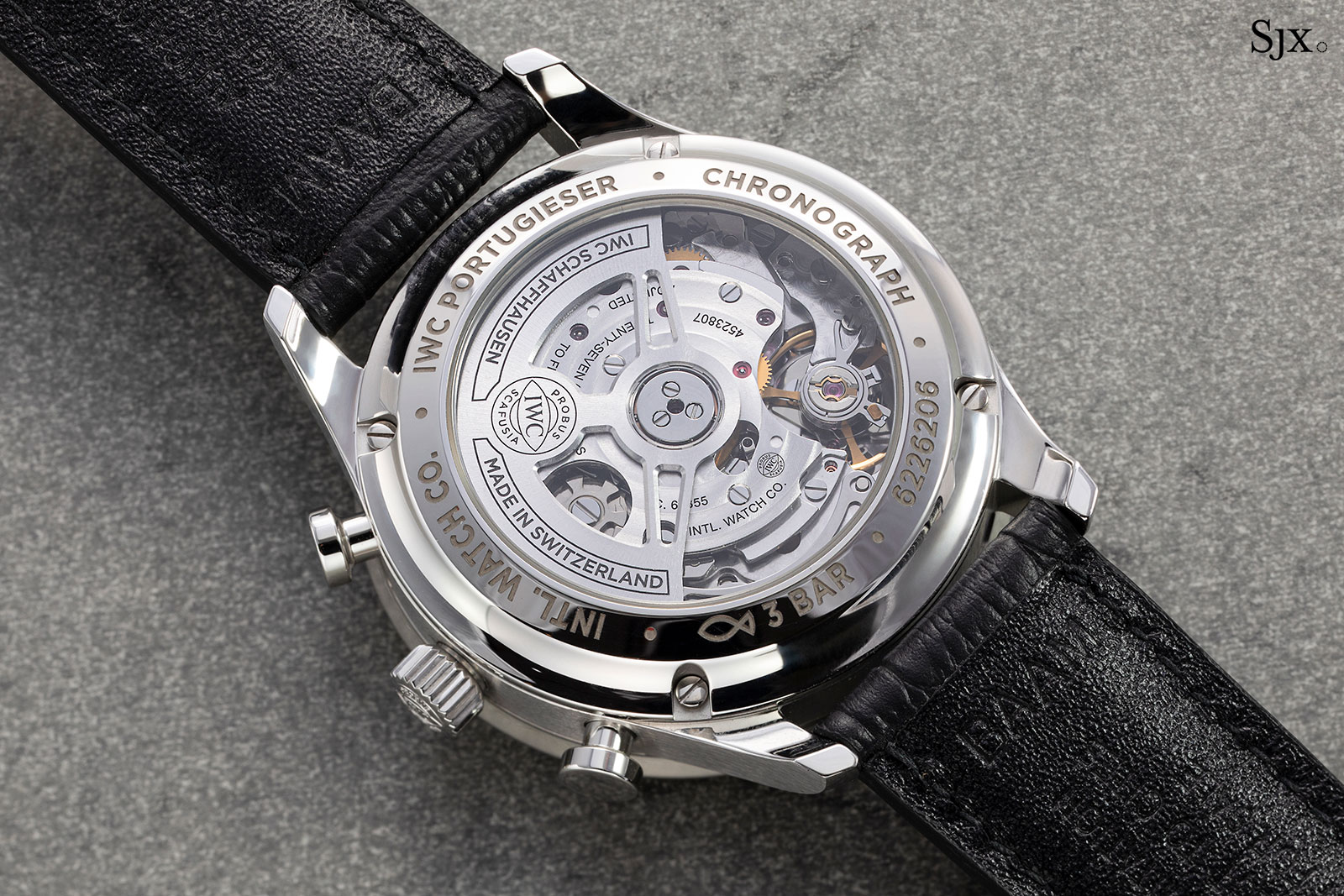 The in-house cal. 69355 visible through the display back

And for those who like the style but want something new, the ref. 3716 is available in funky new colours. The line up totals nine references, in either steel or 18k red gold, including the all-time classic in steel with gold numerals that’s the quintessential Portugieser Chronograph.

The line up also includes several striking new colours for the steel model, namely metallic green, burgundy, or blue. While the green and burgundy are far from the traditional Portugieser look, they are interesting for precisely that reason. The gold-on-silver dial is classic but it has been produced for so long that the look is a bit too common. 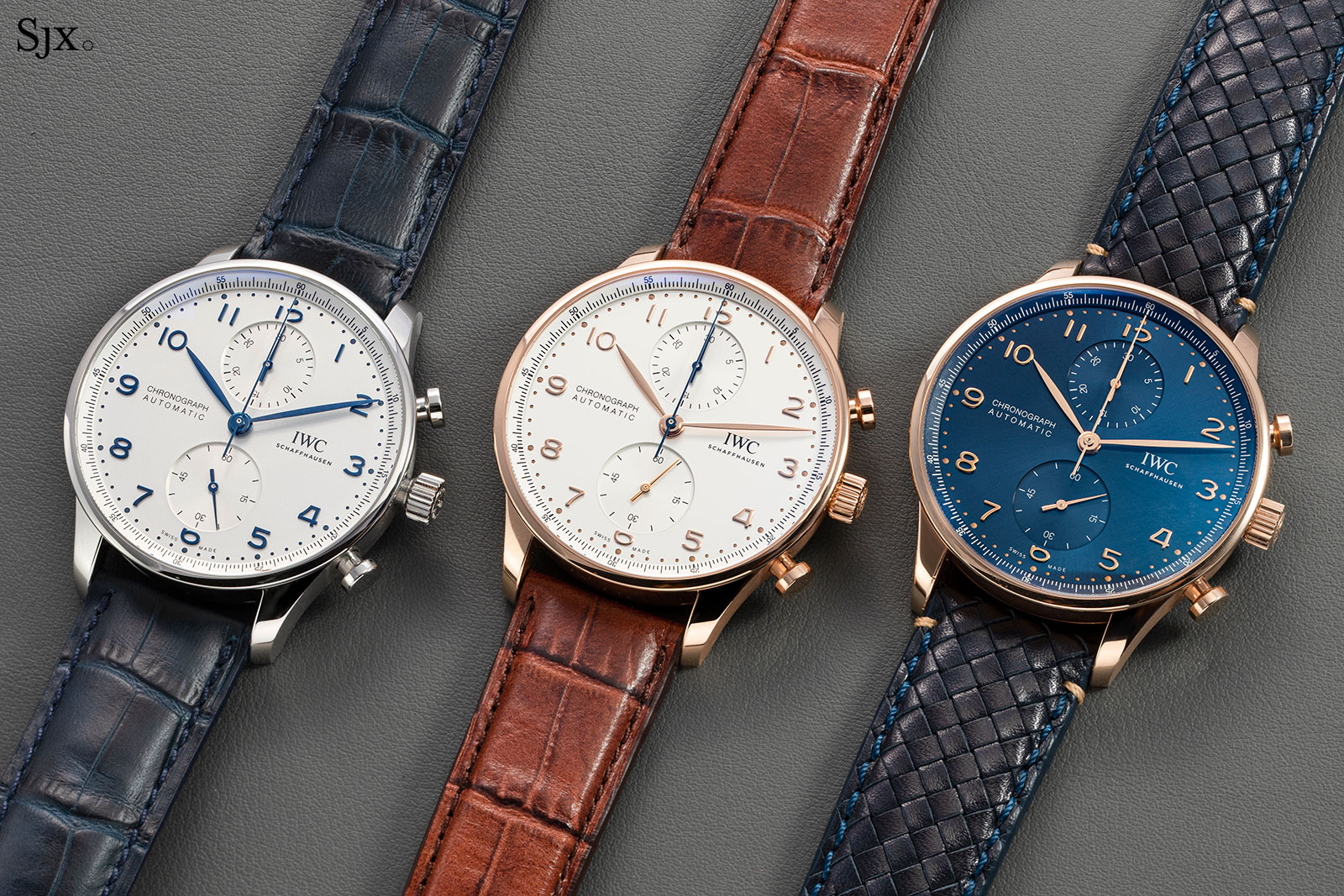 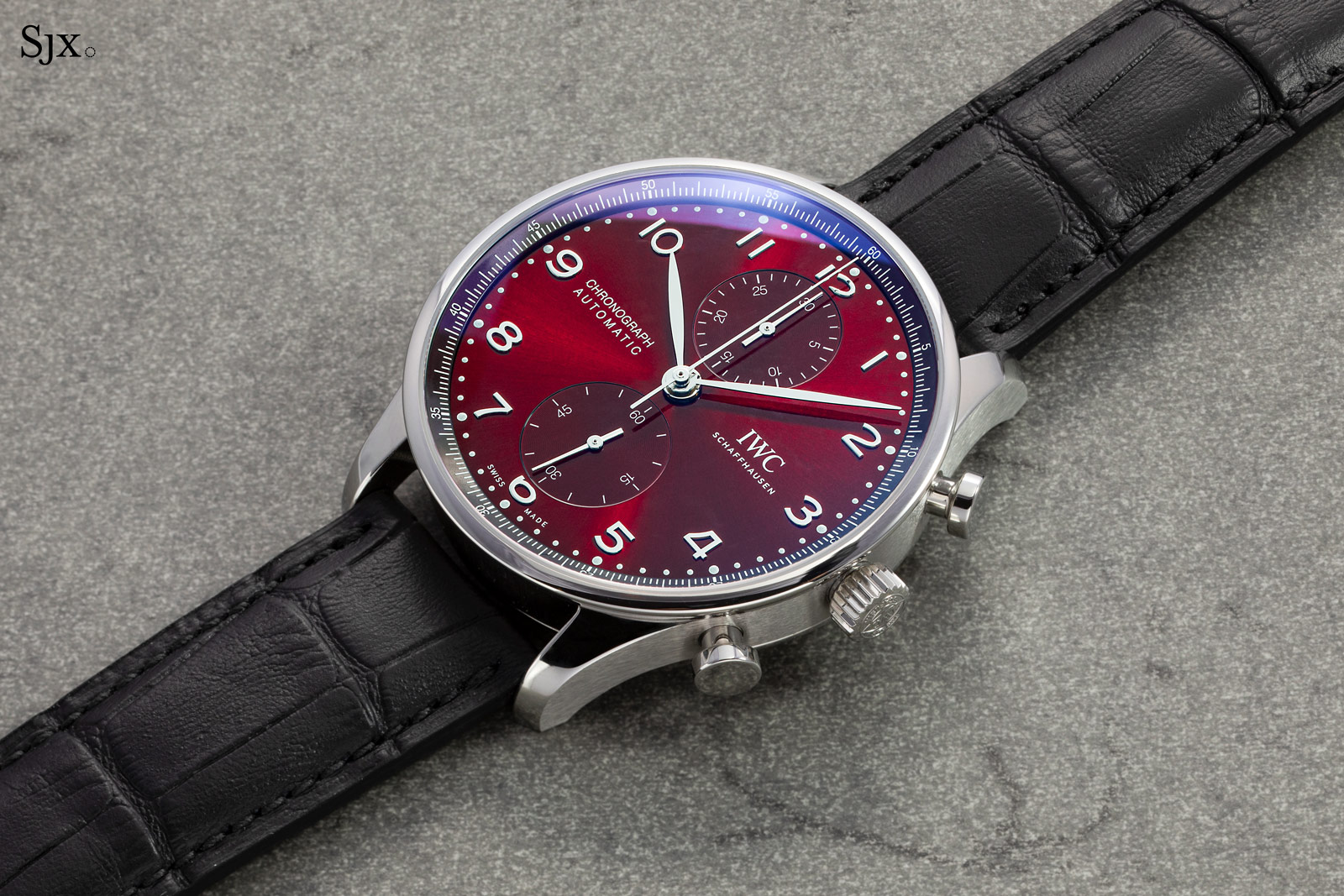 The Portugieser design is simple but surprisingly distinctive. The dial is characterised by Arabic numerals, dot minute track, and a spacious but symmetrical layout. Matched with the narrow bezel, the result is a recognisable and pleasing look that is also versatile, having gone from a time-only watch in the original to a chronograph (and then perpetual calendars and tourbillons).

But while the design is basically the same, a key element has been upgraded. The Arabic hour numerals are now applied, instead of being embossed as they were on the previous generation. On the steel models the applied numerals are brass, but on the 18k gold version, the numerals are also solid gold. The difference between applied and embossed is barely discernible, but it is a little extra that’s nice to have. 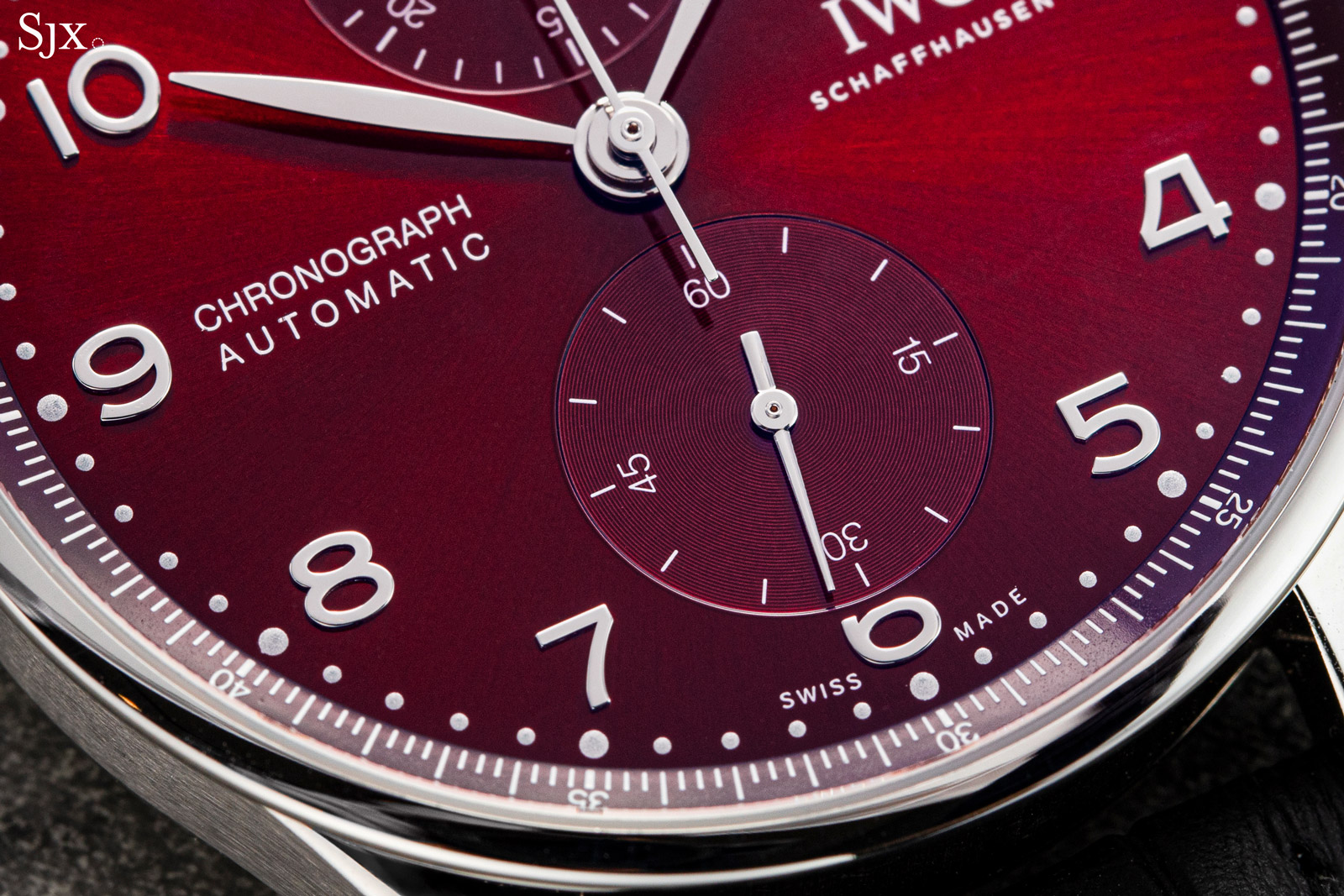 Virtually unchanged in terms of looks over the first generation, the case is straightforward and fuss-free, with brushed flanks contrasted with polished top surfaces on the lugs and a slim polished bezel.

Though a large watch – it was a giant watch historically – the Portugieser has always been slim. The new chronograph measures 41 mm in diameter and 13.1 mm high, slightly thicker than its predecessor but barely. 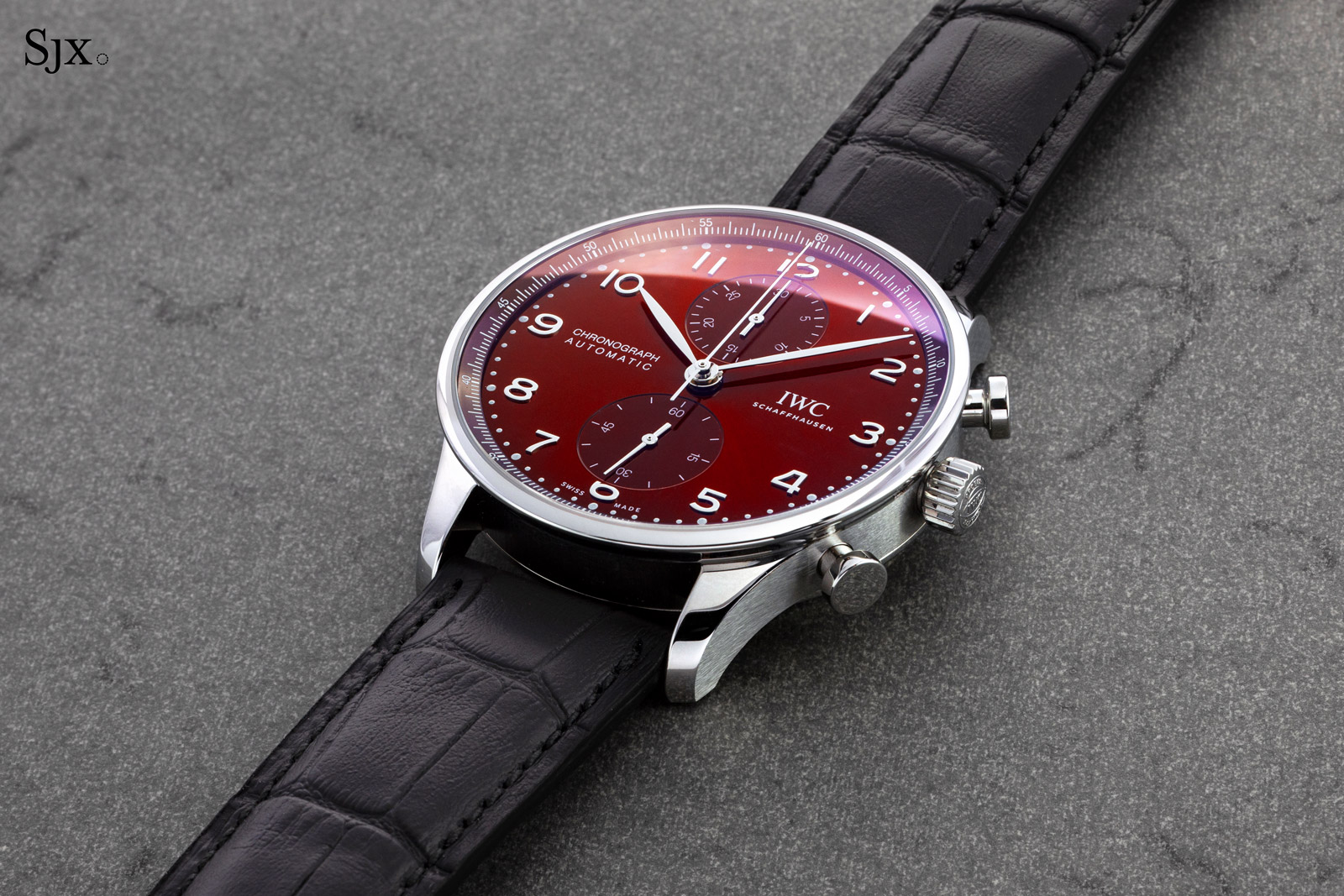 That makes the ref. 3716 notably thin, being much slimmer than the common Valjoux 7750 or Sellita SW-500-powered watches on the market, which explains its appeal. The Brietling Navitimer Chronograph 41, for instance, is 14.44 mm thick while a Sinn 356 Pilot Chronograph measures 15.5 mm.

The dimensions alone make the ref. 3716 one of the most compelling options for someone seeking an elegant automatic chronograph. In terms of aesthetics, the 3714 and 3716 are nearly identical from the case to dial, which makes comparing the two an exercise in splitting hairs. The 3716 is larger than the original, but the differences are so slight that they are almost indistinguishable. The new model is 41 mm in diameter and 13.1 mm high versus 40.9 mm by 12.6 mm for the original. 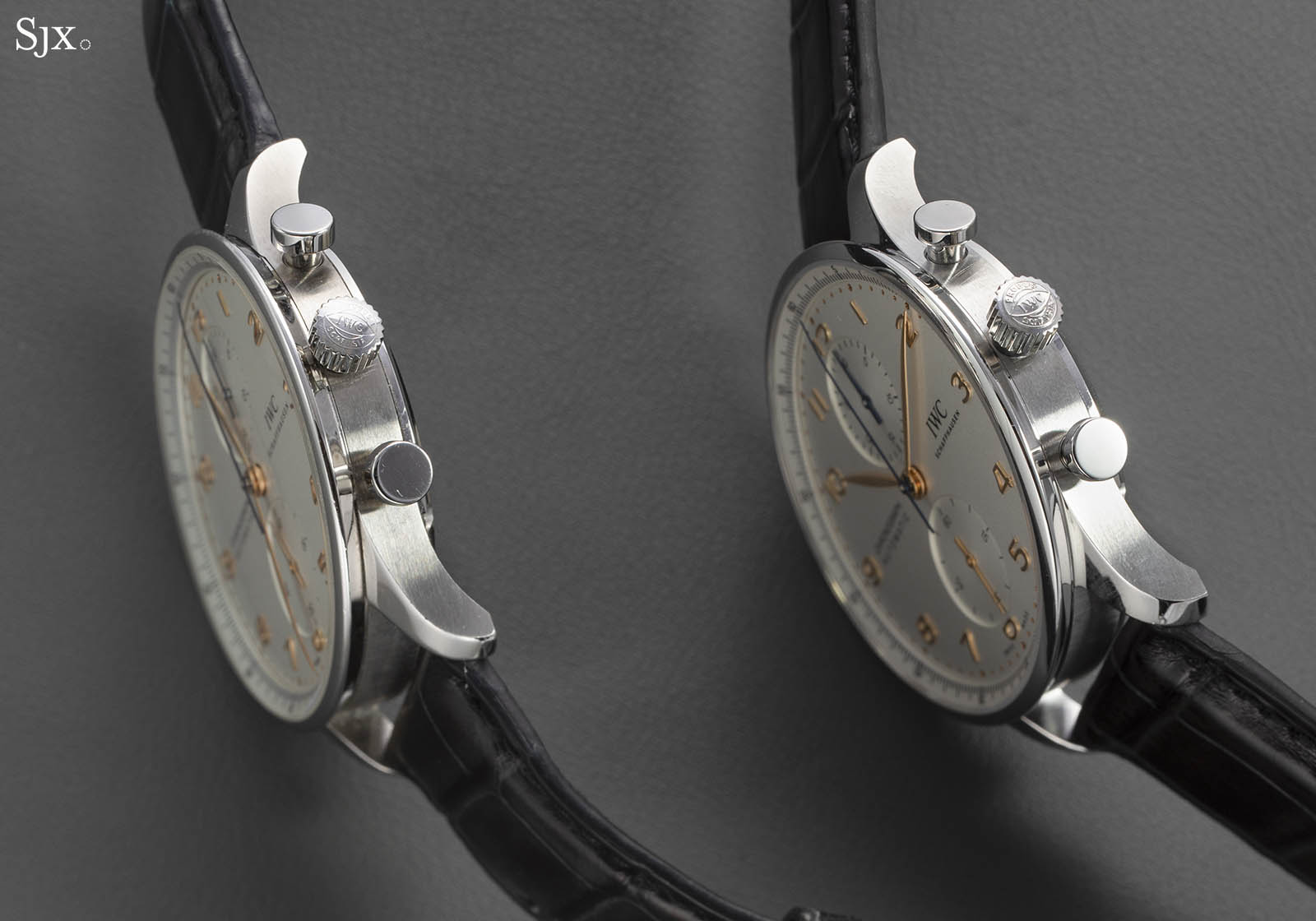 Dimensions aside, one subtle difference between the 3716 and the 3714 are the round pump pushers, with top portion of it in the 3716 being slightly thinner. As such, the pushers are less dominant visually. The finishing of the case is virtually identical to its ref. 3714. 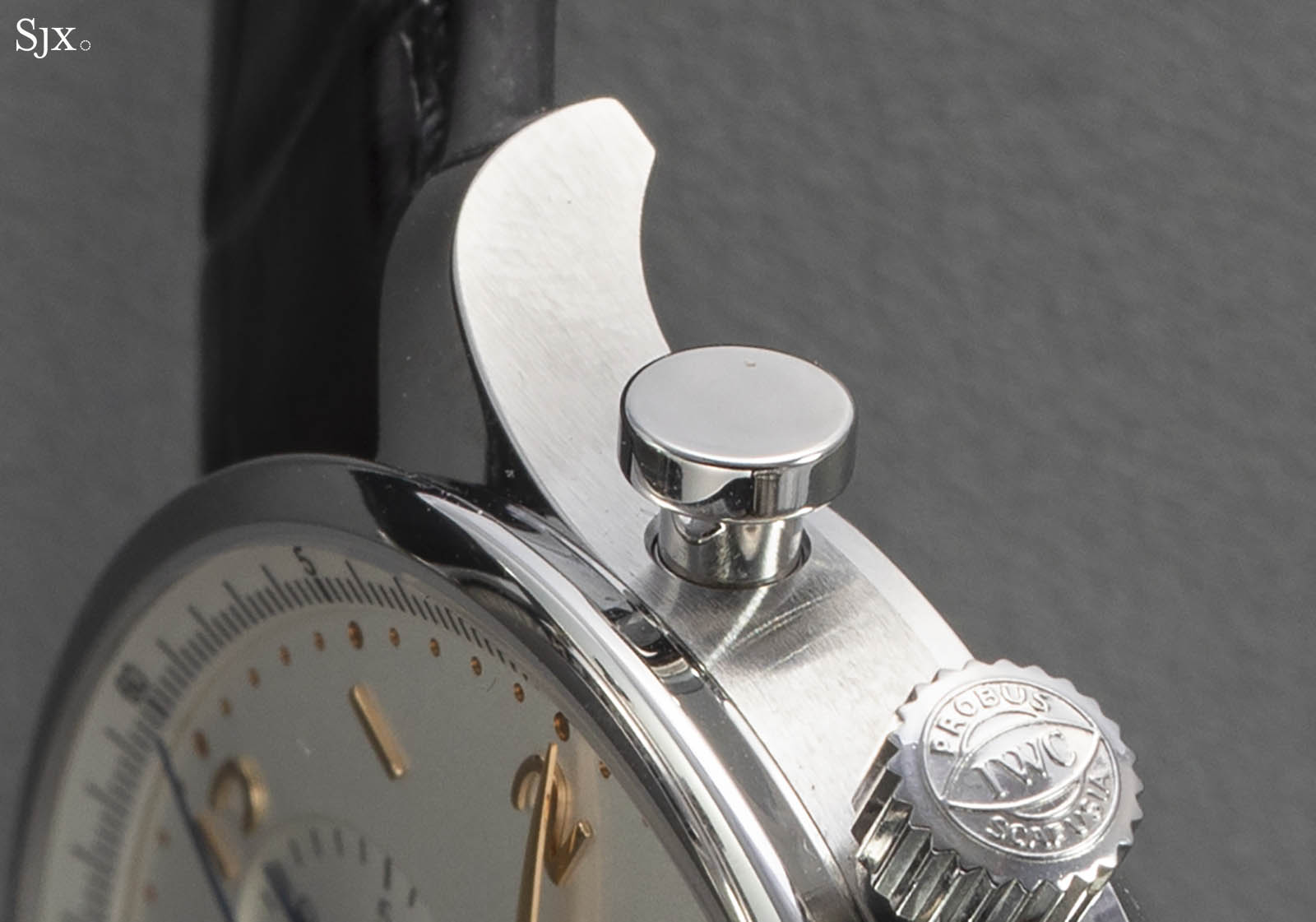 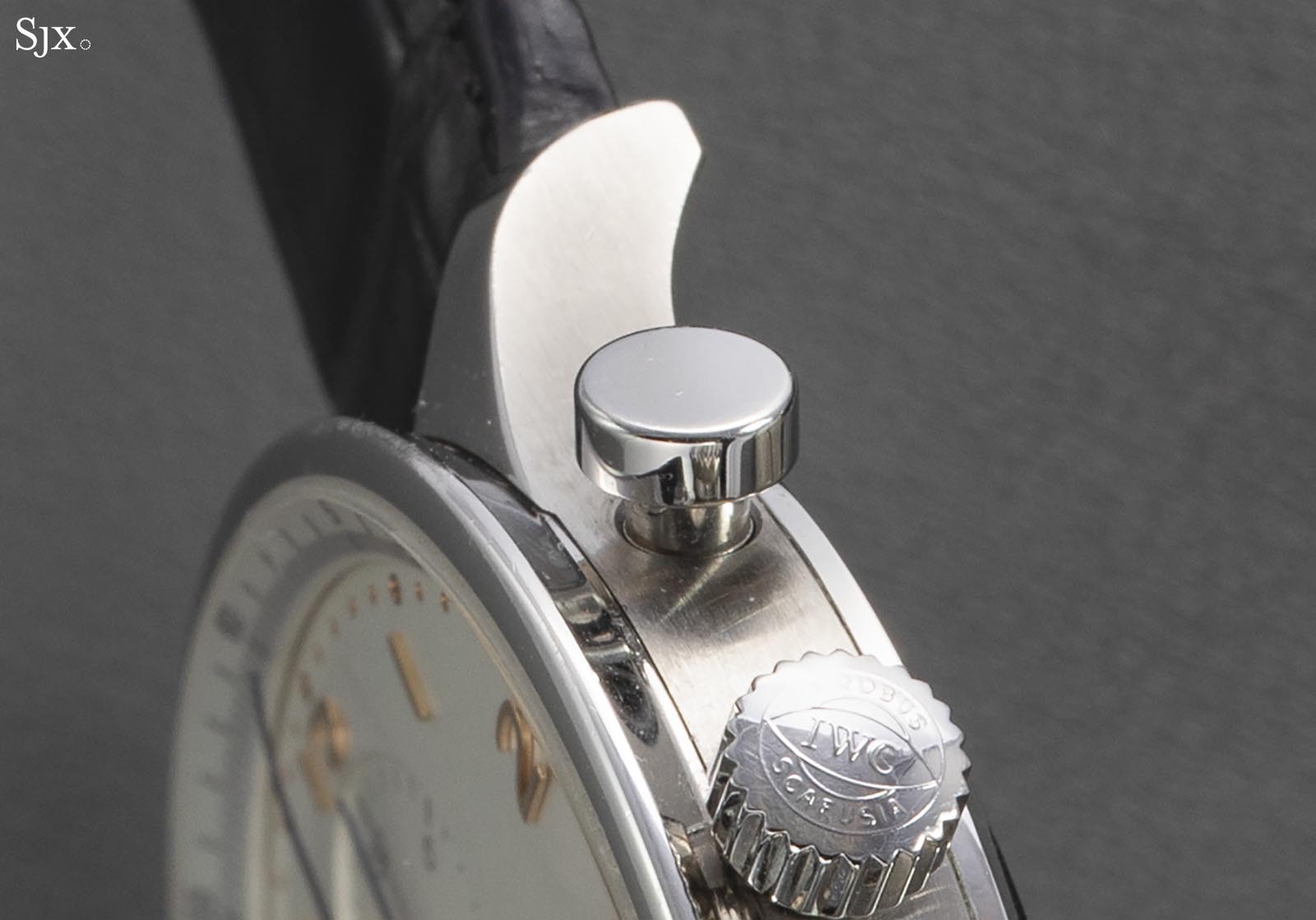 The original design and architecture of the dial remain completely intact save for a couple of small modifications, including the applied numerals mentioned above.

For one, the “IWC” lettering in a classic Roman serif typeface is now slightly bigger and has been combined with the word “Schaffhausen” in a sans-serif font below. At the same time, the weight of the typeface for the words “Chronograph Automatic” has been reduced, which diverts the attention to the logo instead. Overall, the tweaks give the dial a slightly more cohesive and refined feel. 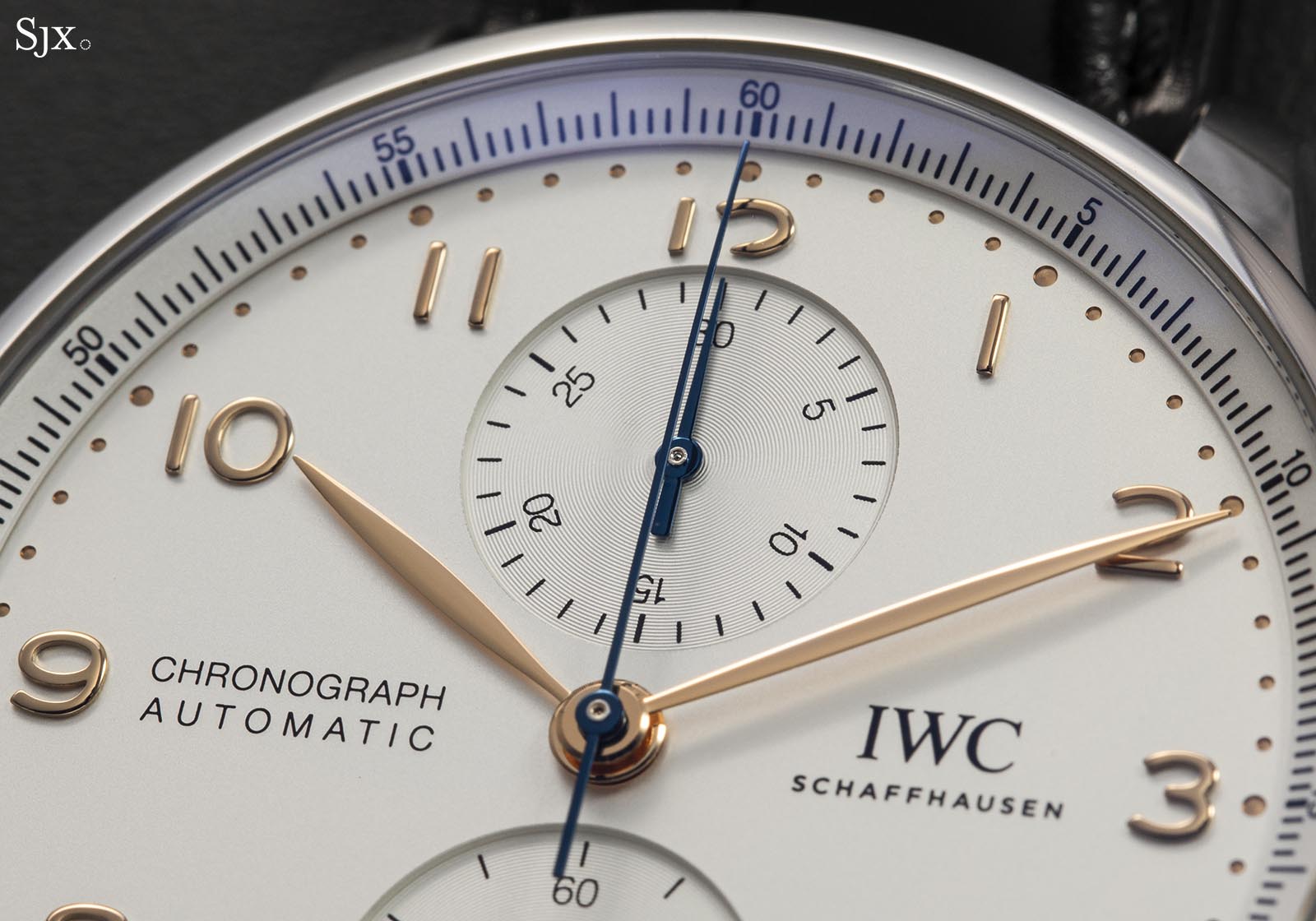 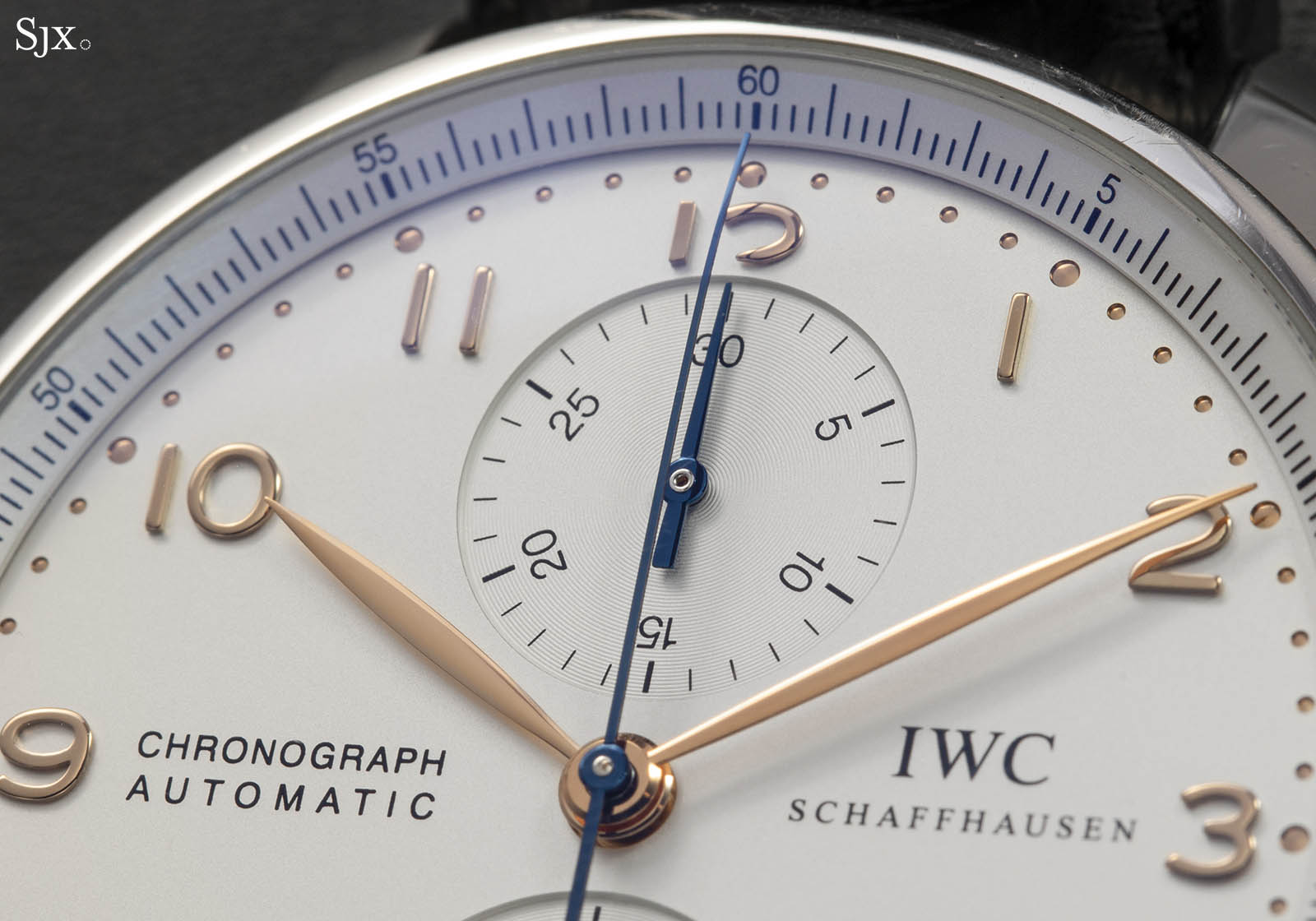 The typeface for the numerals on the registers have also been reduced to a similar size and weight. In addition, the quarter markers on the running seconds counter are no longer in bold – a tiny but sensible adjustment that allows an unimportant counter in a stopwatch to somewhat fade into the background. The bold quarter markers on the minutes totaliser, on the other hand, remain unchanged. In the same vein, the gold running seconds hand has a domed profile and also slimmer than the original, making it less prominent than all the other flat, polished hands. The rest of the dial, from the gold, leaf-shaped hour and minute hands to the applied Arabic numerals, are otherwise identical to the ref. 3714.

The internal update is no doubt the most important aspect of the new model. It is powered by IWC’s own cal. 69355, visible through an open case back and substantially more modern than the Valjoux-based movement it replaces.

A quick refresher: when the ref. 3714 was launched in 1998, it was equipped with the cal. 79240, which was later replaced by the cal. 79350. Both calibres were based on the ETA Valjoux 7750, modified to have a continuous seconds at six o’clock and the omission of the hour totaliser at nine o’clock.

In addition to these modifications, the IWC version of the 7750 was upgraded in several ways, including with a higher jewel count and more decorative finishing. But the movements were still very much a 7750 and easily recognisable as such (though on the ref. 3714 it was hidden behind a solid case back). 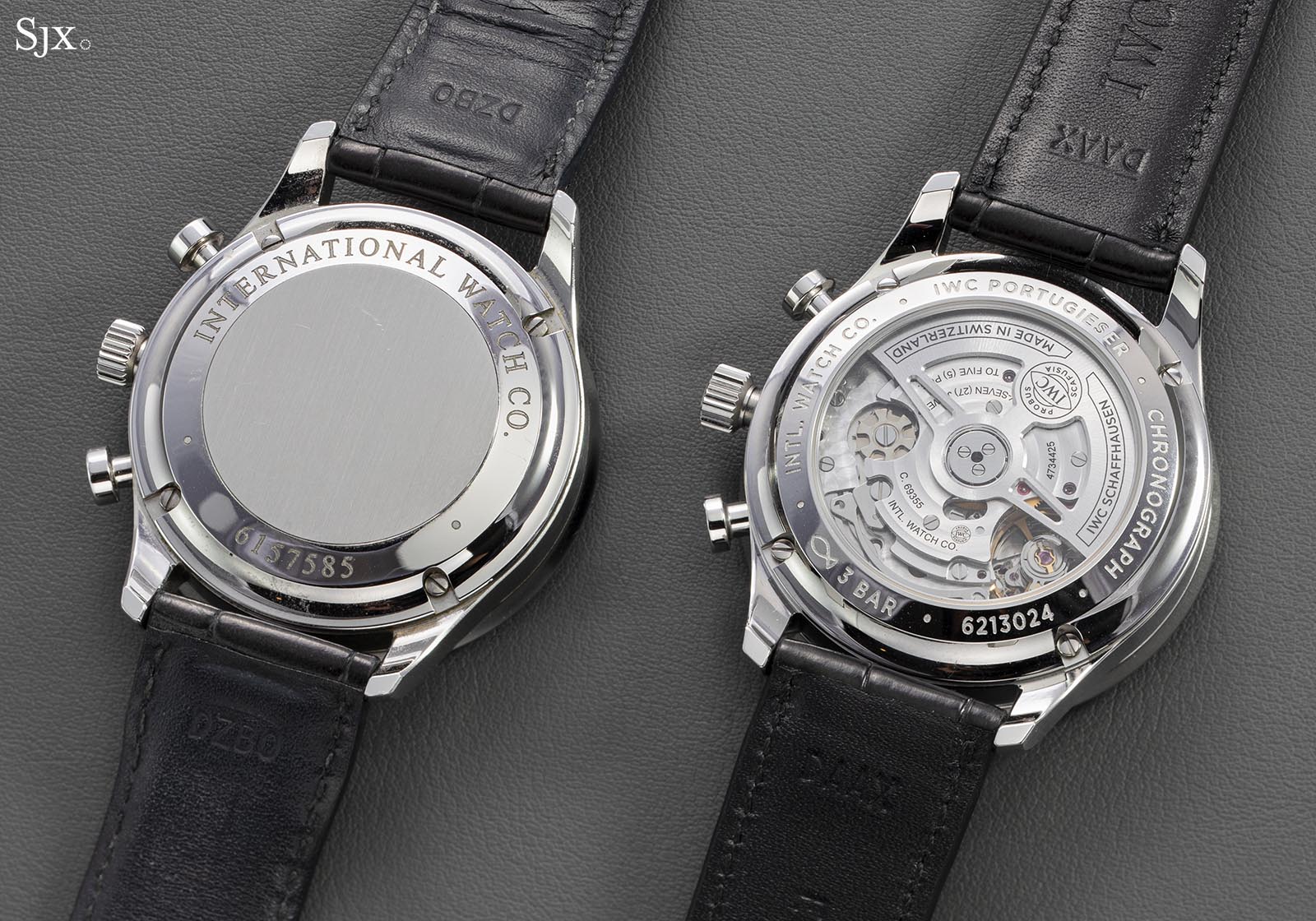 Now it has been replaced by the cal. 69355, an in-house movement but most probably developed with some help from ValFleurier, the movement-making entity of Richemont, IWC’s parent company. The cal. 69355 is a better movement than the one it replaces in many ways, though it is imperceptibly thicker.

Visually, the cal. 69355 is monochromatic and industrially finished, a look that is very much in keeping with IWC’s engineering-centric movement development. Part of the 69000 family of movements, the cal. 69355 was developed from the ground up, so it was designed to fit a watch like the Portugieser chronograph without modifications. While the constant seconds had to be moved from nine to six on the Valjoux 7750, the cal. 69355 has its fourth wheel located at six o’clock under the dial, so it drives the seconds hand directly. (Many thanks to Hirota Masayuki, editor in chief of Chronos Japan for his input on the technical details below.) And the cal. 69355 also has a high-tech escapement featuring a skeletonised, nickel-phosphorous escape wheel and pallet fork fabricated via LIGA, a high-tech lithographic and moulding process that enables precise fabrication.

The advantages of LIGA-manufactured parts are considerable, primarily in lightness, improving efficiency of the movement. In fact, the power reserve has improved slightly, up by two hours to 46, in the cal. 69355. And lastly, the cal. 69355 also incorporates a bidirectional pawl-winding system that is similar to the “Magic Lever” mechanism originally invented by Seiko but now fairly common, especially amongst movements of Richemont-owned brands. Even the far more expensive watches like the Vacheron Constantin Traditionnelle Tourbillon rely on the Magic Lever, which is well liked for its simplicity, compactness, and efficiency.

Similar in principle to the Pellaton winding mechanism that’s an IWC signature, the Magic Lever utilises two pawls, one pulling and the other pushing, to winding the mainspring. Though simpler than the Pellaton mechanism, the Magic Lever is made up of fewer parts, and takes up less space, explaining its popularity with movement designers.

The excellent dimensions, along with the incredible discretion and clarity of the dial, have made the Portugieser Chronograph a very sharp watch, perhaps the most elegant mid-range automatic chronograph on the market. And having a tangibly better movement – in both functions and engineering – only makes it all the more compelling especially when it doesn’t cost that much more than the outgoing model.

An upgrade of the classic bestseller.