Continuing with its series of limited editions to mark its 40th anniversary, retailer The Hour Glass has just announced a special variant of the Sinn 356 Pilot Chronograph. A no-frills aviator’s watch, the 100-piece edition is the retailer’s most affordable commemorative model to date, priced at 3,850 Singapore dollars, or about US$2,800.

In keeping with the series’ recurring theme of dial colours inspired by vintage watches – ranging from salmon on a Nomos to champagne on a Ulysse Nardin, the dial of the Sinn has a variegated, aged finish.

It does also have the somewhat pointless date and day, but a consequence of the fact that the original 356 used the Valjoux 7750. It has the calendar as a standard feature, and was the de facto movement for most chronographs at the time. 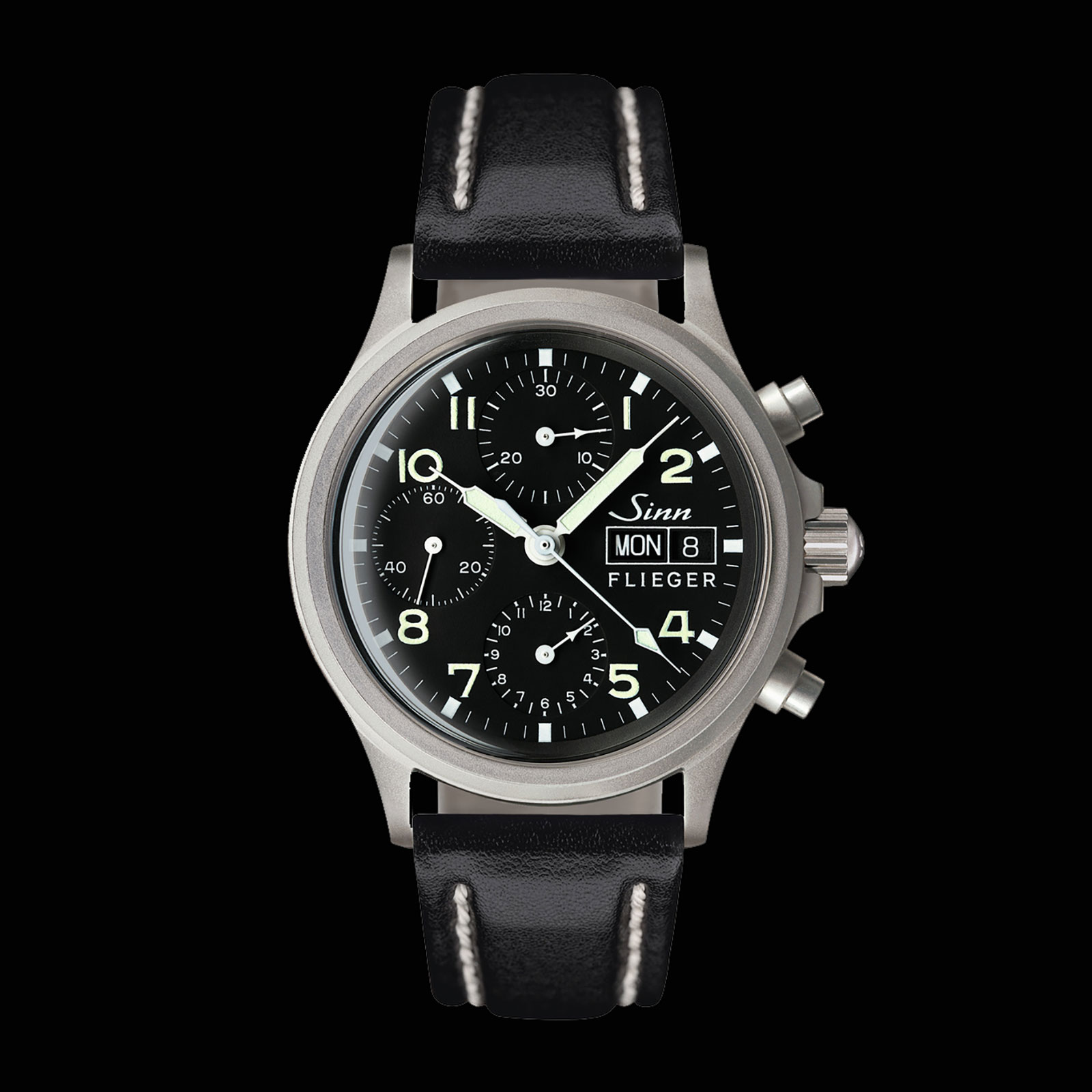 Dial aside, the commemorative edition is identical to the standard model. The stainless-steel case measures 38.5mm, making it one of the smallest pilot’s chronographs on the market.

However, it is still considerably thick, a little bit too thick at 15.5mm, due to the height of the movement inside. As a result it sits high on the wrist, though that is quite common for chronographs designed in the 1990s, which mostly had smaller diameters.

Sinn now also offers the 358 that is almost identical to the 356, except the case has been enlarged to 42mm. Though the increase in size is not substantial, at least by the numbers, the 358 feels a lot larger, and probably too big.

The case is bead-blasted to a smooth, matte finish, fitting for a tool watch. However, it is an ordinary steel case. Because the 356 is an entry level model, the case is not treated with Tegiment, Sinn’s proprietary surface hardening process.

Though simple, the case has a fairly distinct style, with a stepped bezel and angular crown guards. It’s topped by a domed acrylic crystal, which further contributes to its vintage look. For the standard 356, a scratch-resistant sapphire crystal is offered on the 356 Sa Pilot, but that was left out to keep the price of the anniversary edition as affordable as possible.

And thanks to a screw-down case back and crown, the watch has a depth rating of 100m. 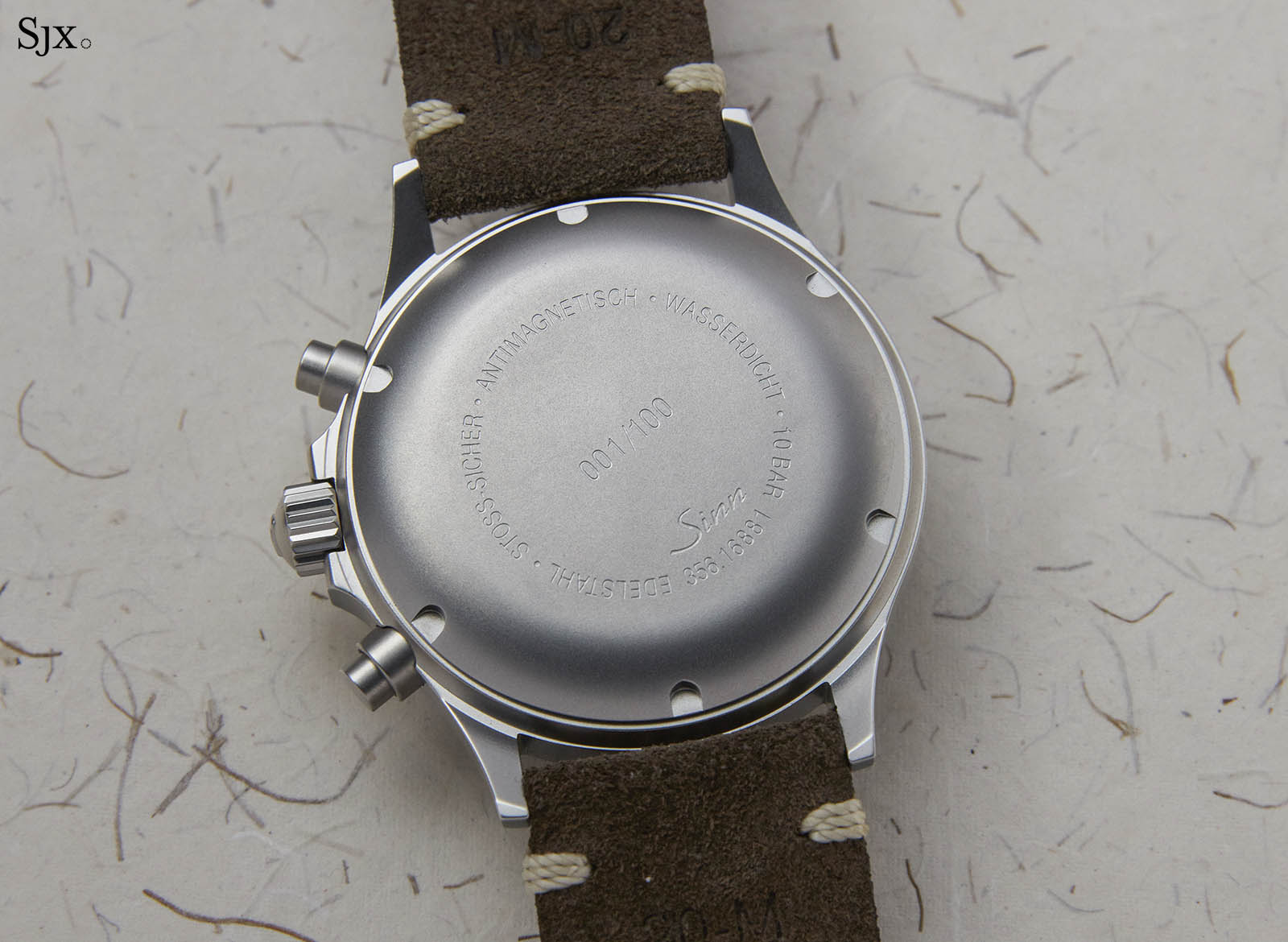 Each of the 100 watches is numbered on the back

Sitting in between the technical-looking, conventional black dial of the basic 356 and the guilloche salmon dial of the fancier 356 Pilot II, the dial finish is the only unusual feature of the watch. It’s similar to the finish found on aged “gunmetal” watch cases, and was achieved by simply brushing the dial in random, multiple directions, creating a very convincing antique look.

Because the chronograph sub-dials are recessed, and finished with concentric guilloche, or azurage, they are visibly distinct. And the registers are further highlighted by the fact that they are a shade darker than the rest of the dial, since their sunken position means the dark finish was not brushed off during the ageing process. 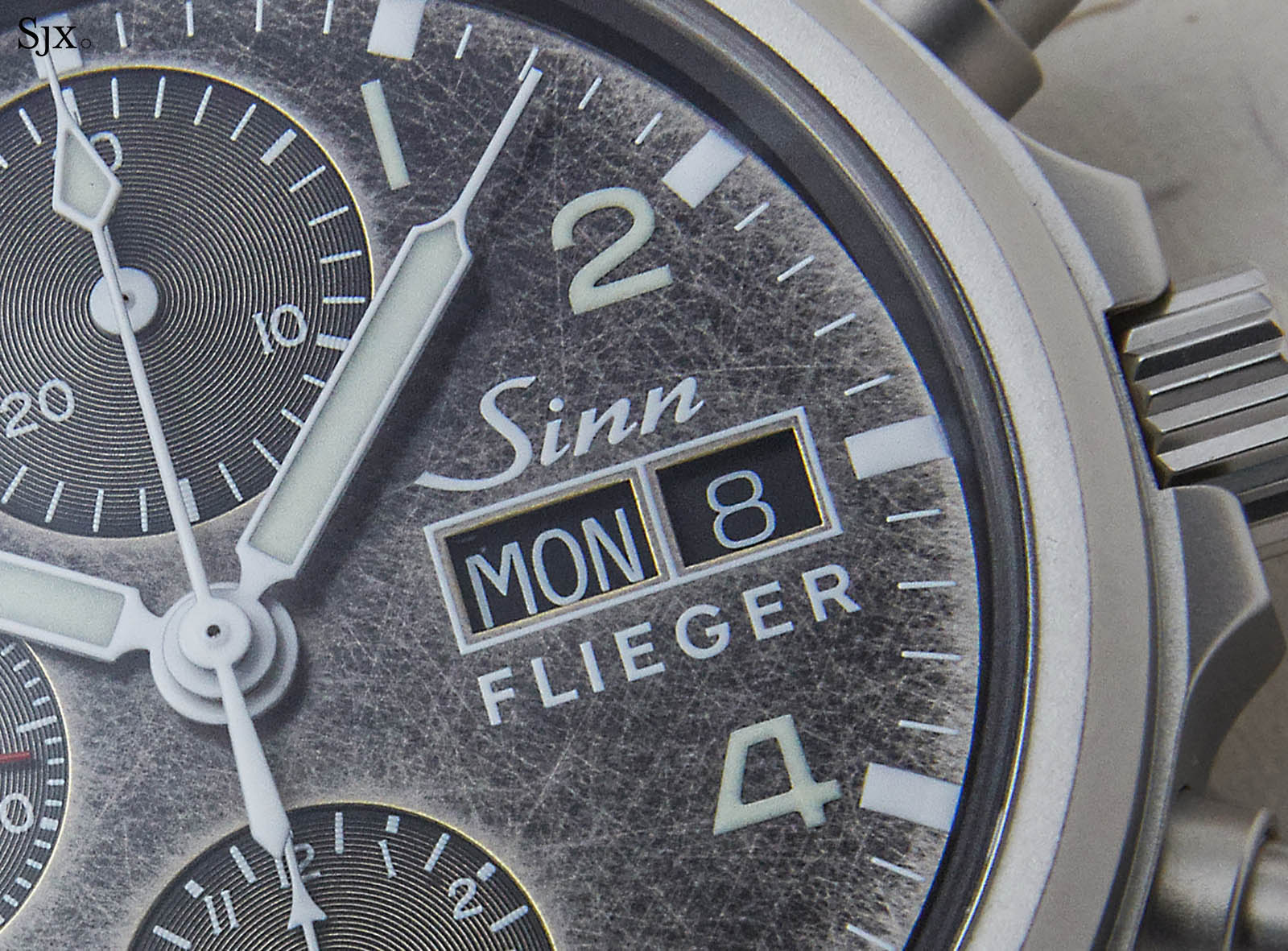 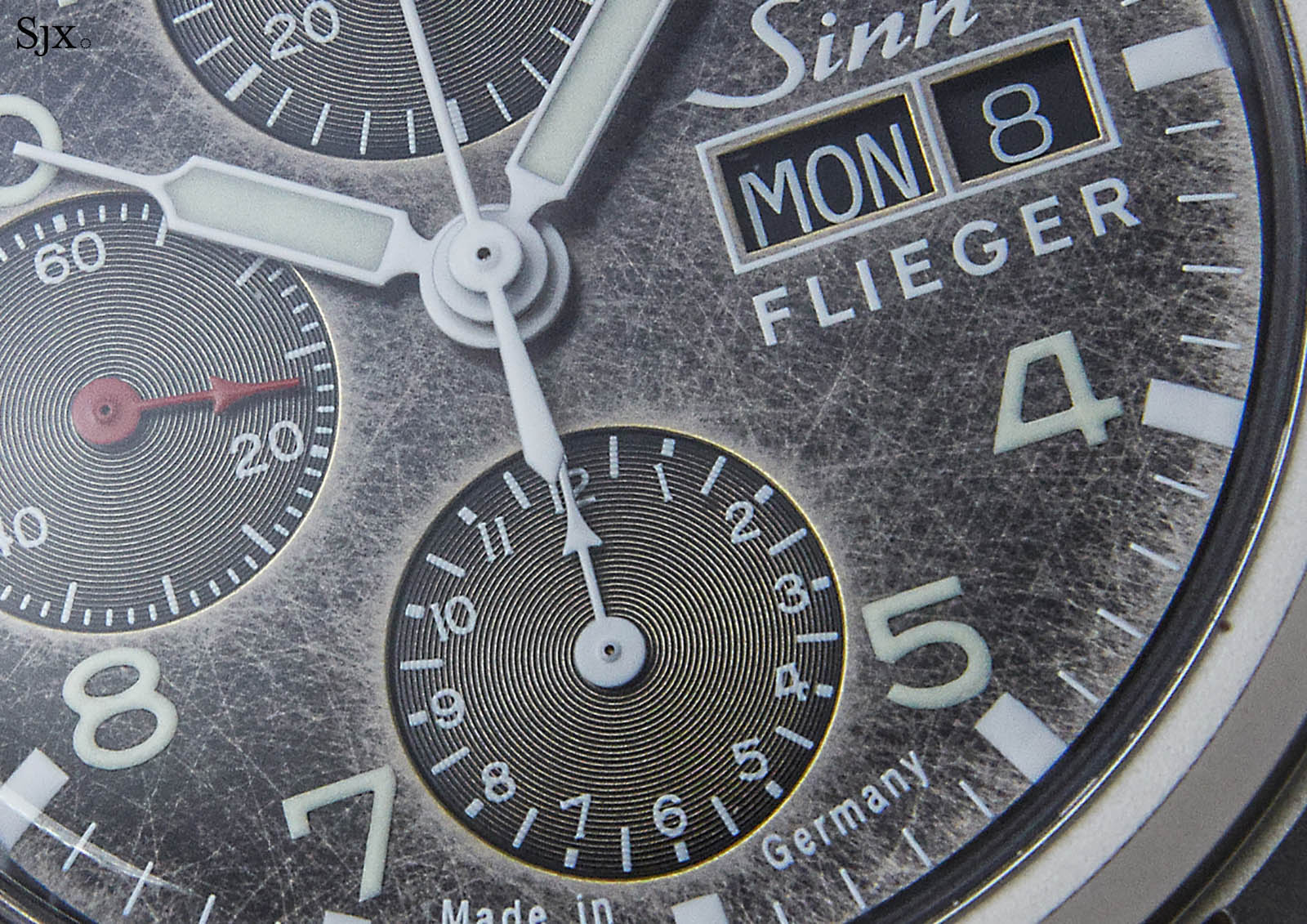 A slightly odd detail is the running seconds hand at nine o’clock – it is painted red while all the other hands are white.

In a pilot’s chronograph, it should be the opposite, with the central seconds hand being in red – since elapsed or recorded time is the most important – with the constant seconds being a neutral colour (maybe even grey to blend into the dial) since the only purpose of that is to know that the watch is running. 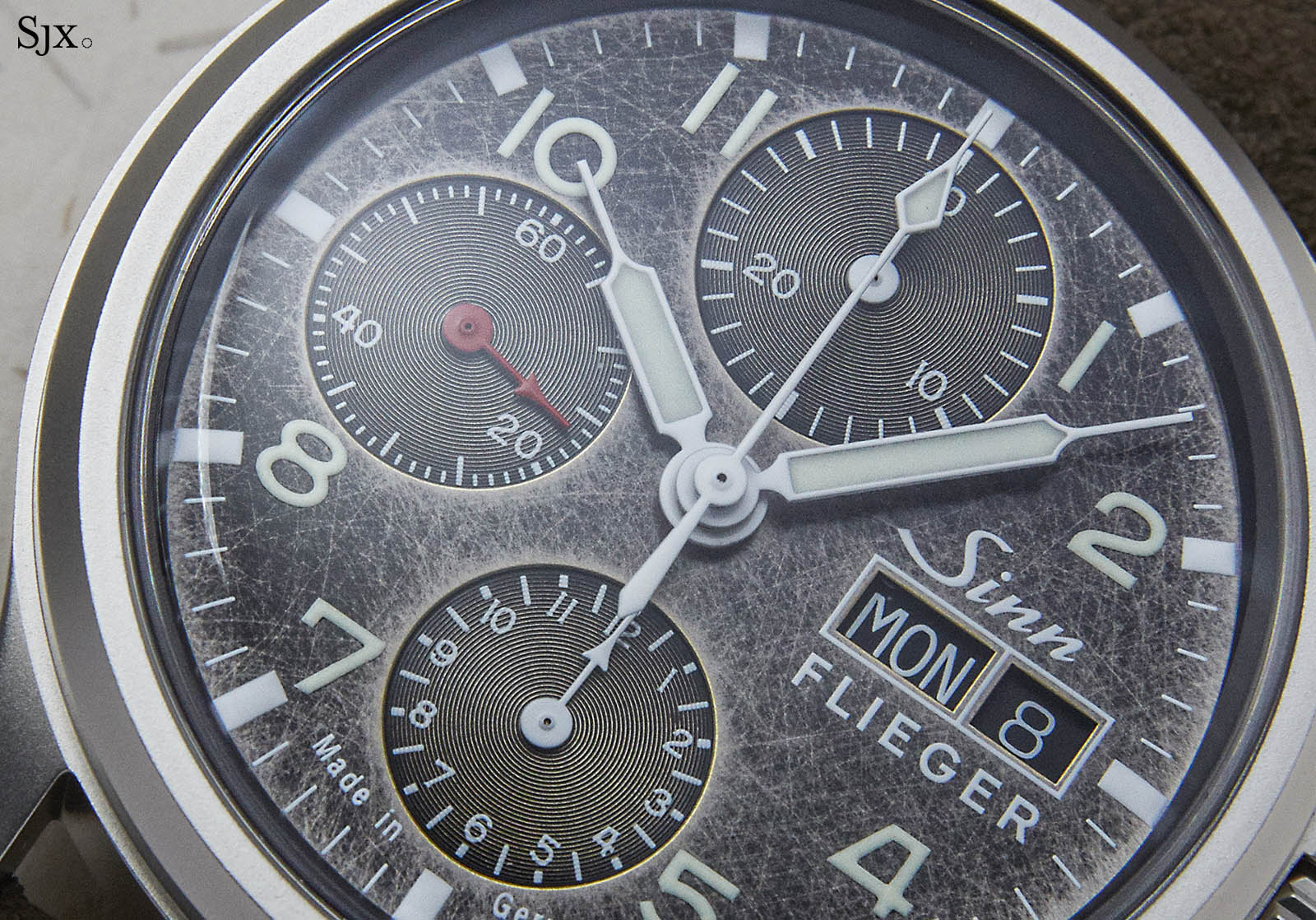 While Sinn has gradually upgraded its movements over the years, equipping its higher-end chronographs with a variant of the Valjoux 7750 modified in-house as found in the EZM 1.1, the 356 is still an eminently affordable base model, so it is powered by the Sellita SW-500.

It’s a clone of the Valjoux 7750, so essentially identical. The chronograph relies on a cam and oscillating pinion, both more economical and simpler in construction as opposed to the the column wheel and clutch respectively. And it has the same 44 hour power reserve as the 7750, which is a bit short by modern standards. That being said, it is known that Sellita is progressively upgrading its movements with longer power reserves, so the short power reserve should change in the near future.

The Sinn 356 Pilot Chronograph is attractive, with the aged dial making it distinct from Sinn’s usual fare of stark, functional designs, and also affordable as well as strong value.

That also means the 356 is basic, but in a focused, fuss-free way. The 356 does lack the signature technical innovations like Tegiment found in Sinn’s (substantially) pricier offerings, most notably its magnificently engineered dive watches, but it does not aim to be anything more than the watch it is. In short, it sticks to its specialty and does it well. 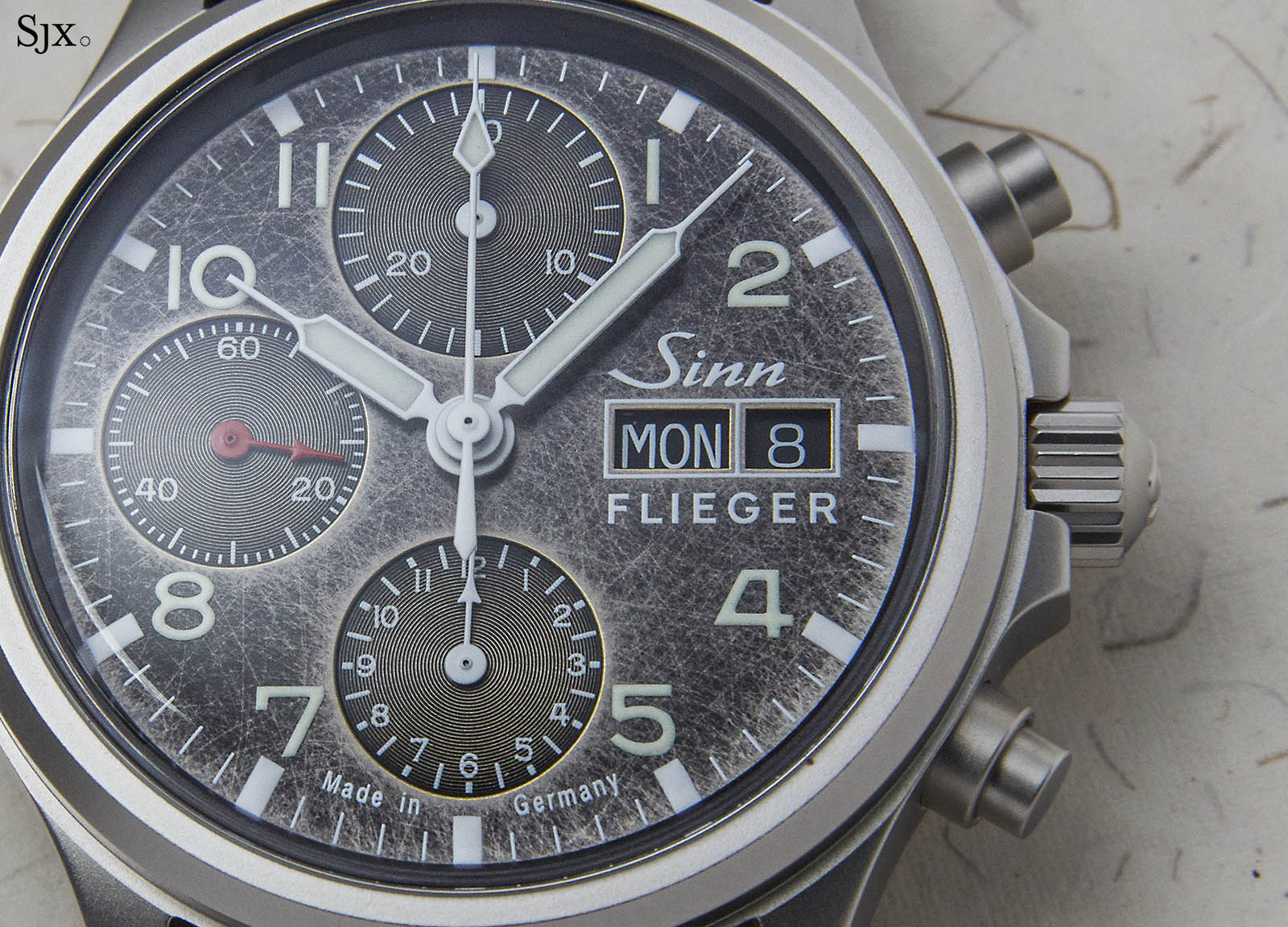 Limited edition: 100 pieces
Availability: Only at The Hour Glass and Watches of Switzerland stores in Singapore
Price: 3,580 Singapore dollars

Highlights from Phillips' Geneva Watch Auctions in Singapore, at The Hour Glass

From April 4 to 8 at Malmaison.