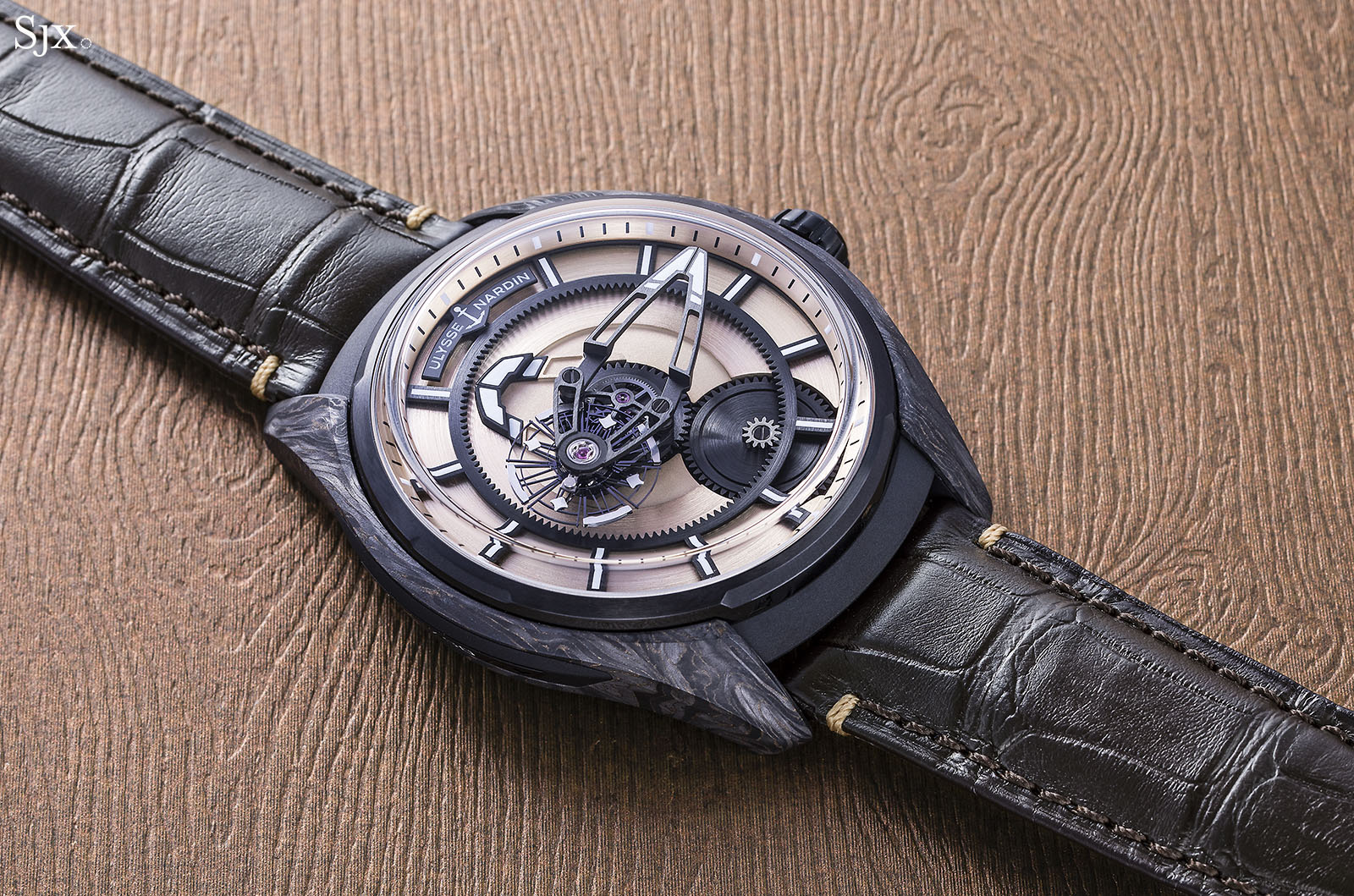 Having unveiled commemorative editions from the likes of Audemars Piguet, De Bethune and Urwerk for its 40 years in business, Singapore watch retailer The Hour Glass continues the anniversary roll-out with the Ulysse Nardin Freak X Carbonium Gold.

The watch is a variant of the entry-level but appealing Freak X, a remarkable exercise in simplicity and the most affordable version of the Freak to date. But importantly, it manages to be the base model without being a concession, and instead is more of an optimisation, offering a great deal of exotic watchmaking – it boasts the fanciest oscillator of any watch in this price segment – for little money as such things go.

While the Freak X forgoes some characteristics of its avant-garde forebear, it is both technically clever and much more refined in design, offering an enhanced practicality by way of a smaller case, a traditional crown, an automatic movement, and most crucially, a high-performance silicon balance wheel – an innovation found only in one other Freak, the pricier Freak Vision. 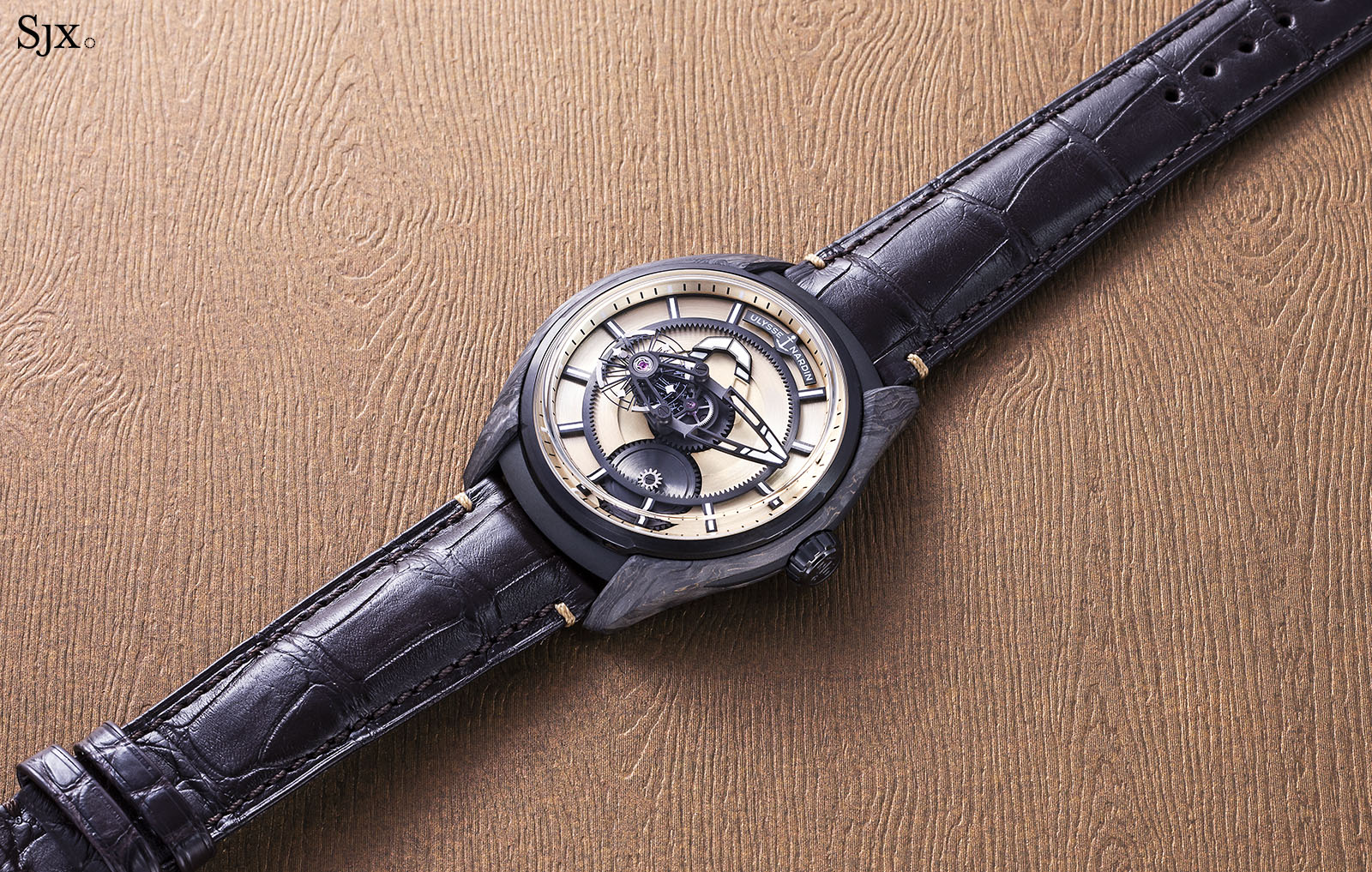 Limited to 30 pieces, the Freak X for The Hour Glass combines a new case material – “Carbonium Gold” – with a striking champagne dial.

In contrast to most Freak models that have dark dials, this Freak X has a face in a pale gold which gives it a greater presence on the wrist, but because of its matte, brushed finish, it isn’t loud and manages to be easily wearable. The only downside of the champagne dial is the lack of contrast against East Asian skin colour, which means it stands out less on the wrist; a slightly darker shade of champagne would work better in terms of visual contrast.

To match the case and bezel, the central bridge, the fixed ring gear and wheels that drive the hour hand are all in black, bringing greater emphasis to the carrousel mechanism against the gold dial. 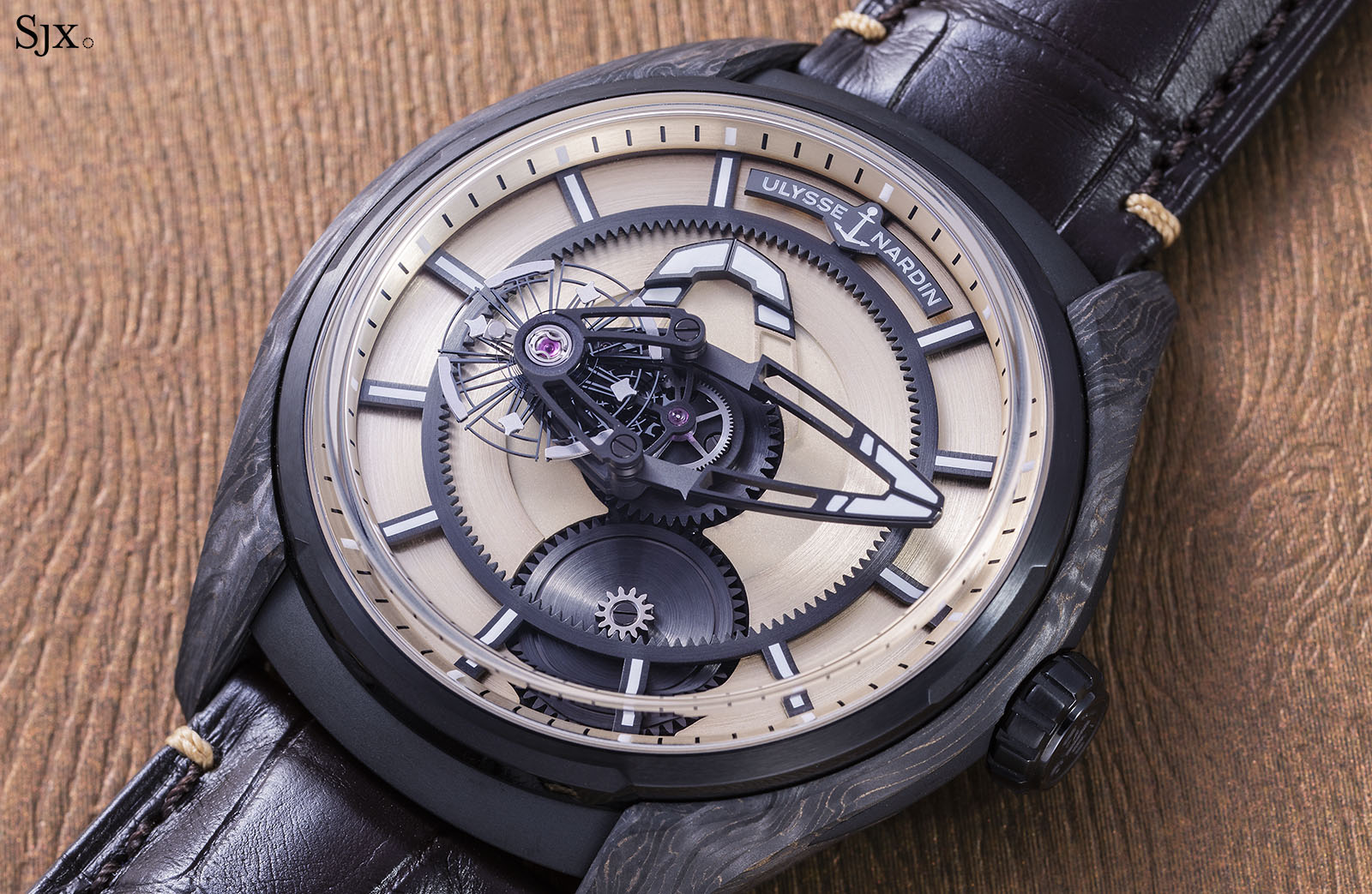 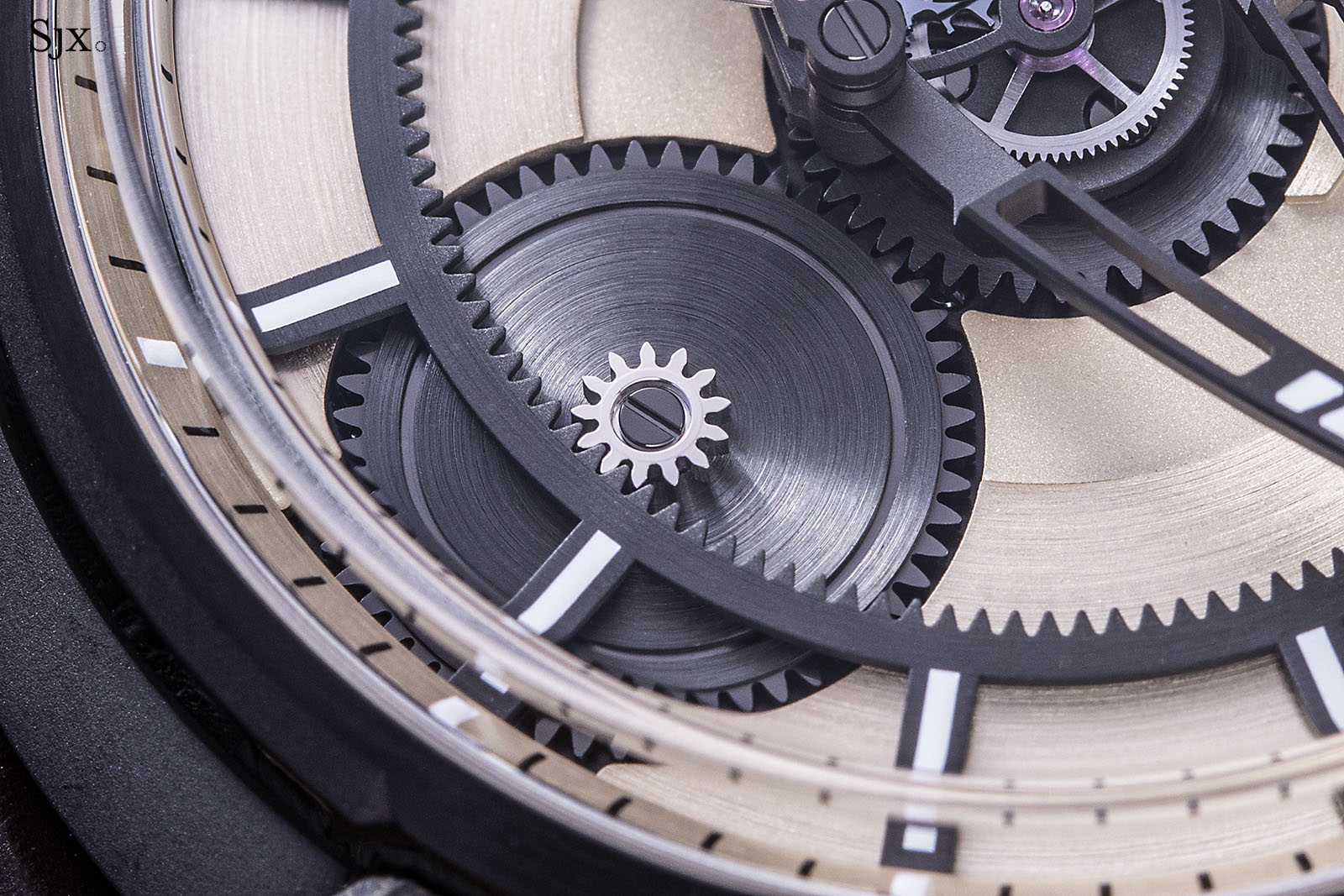 Unlike the original Freak, the Freak X optimises the carrousel construction, turning it into a simpler, and arguably more robust, mechanism, with larger wheels that are integrated into the revolving hour plate, while much of the gear train is hidden underneath.

But the escapement and balance wheel form the minute hand, revolving around the dial once every hour – a feat that is still uncommon even after 18 years since the launch of the Freak. 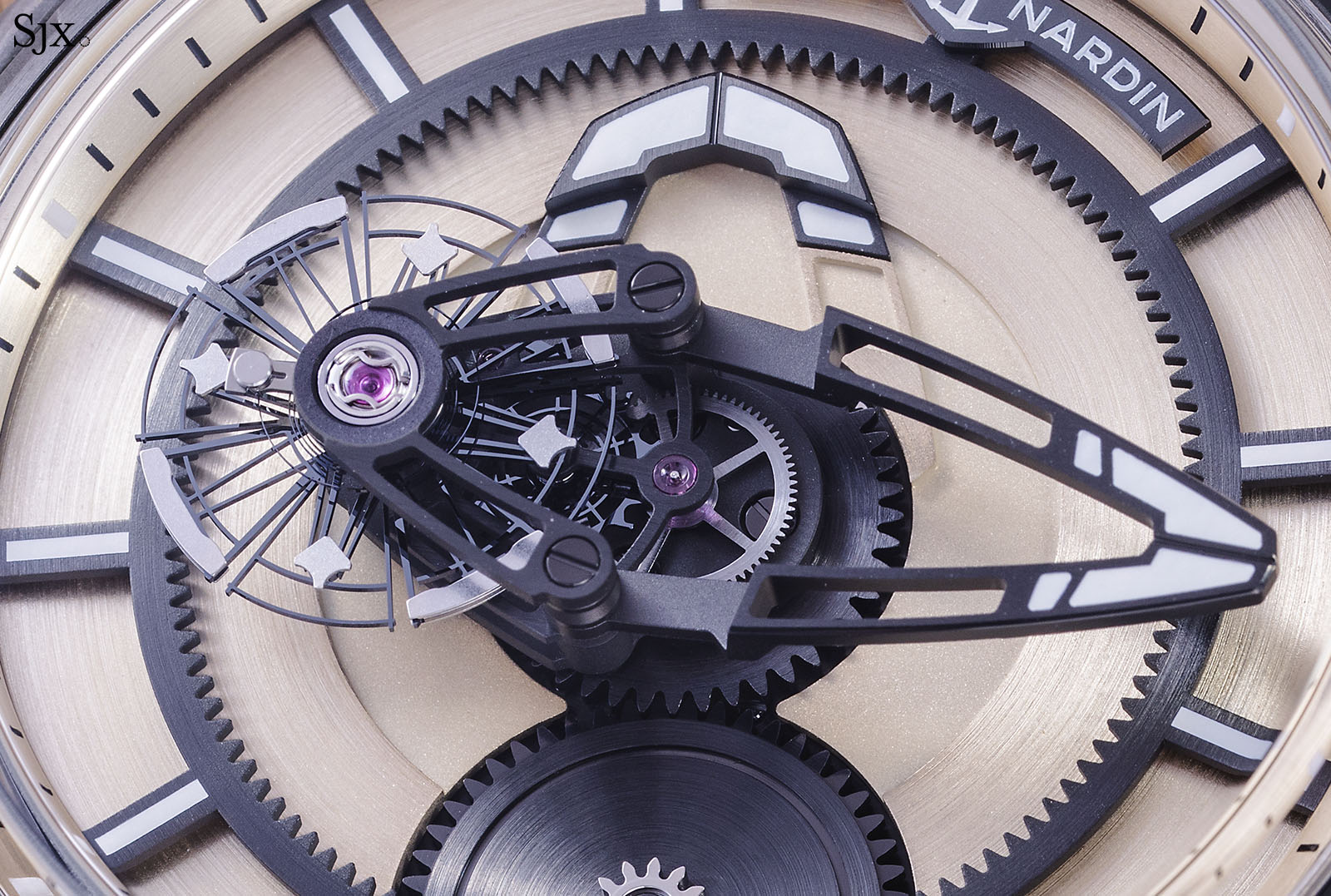 While the Freak X uses a traditional lever escapement, it is nevertheless made of silicon. And it is joined by the technical highlight of the Freak X movement, a high-tech, silicon balance wheel – ironically a feature absent in the hand-wound Freaks that are all more expensive. 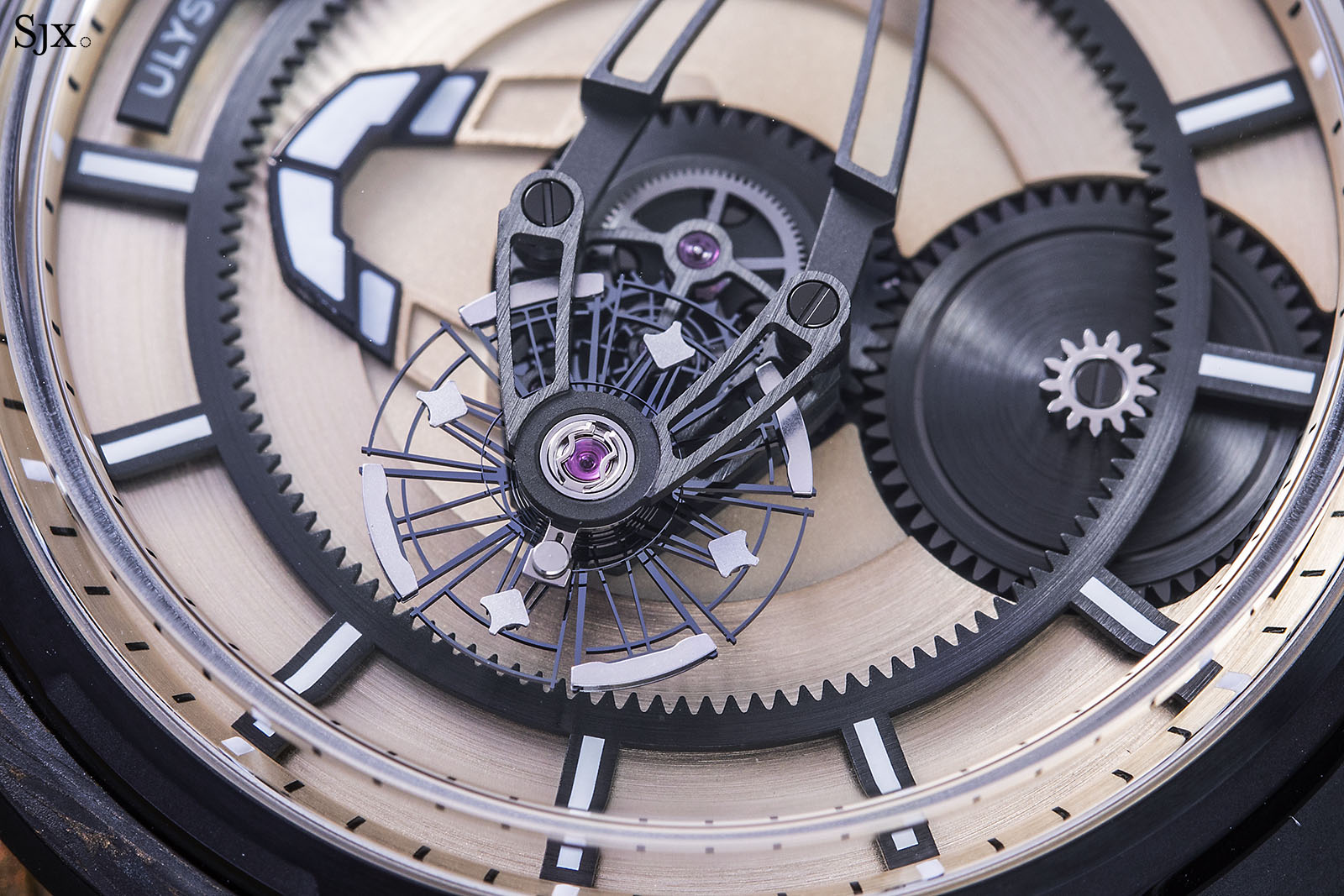 The construction of the mechanism means it requires far less energy to drive the entire display, allowing the use of a conventional automatic base movement. The movement inside is the cal. UN-230, which is based on the UN-118, the brand’s workhorse, in-house automatic movement while the carrousel time display is based on that found in the UN-250 movement used in the Freak Vision. In essence it’s a Freak-like time display and oscillator built upon – and integrated into – the regular calibre underneath.

Just as important as its technical achievements is the smaller, more wearable case – 43mm instead of the 45mm of earlier Freaks. The Freak X case has also been redesigned; it is far more elegant and comfortable on the wrist with a more rounded form along with short, gently tapered lugs.

But not only is the case of this Freak X smaller, it is also much lighter, as it is made of Carbonium Gold. Carbonium, a lightweight and strong carbon composite, is typically used for the fuselage and wings of aircraft. 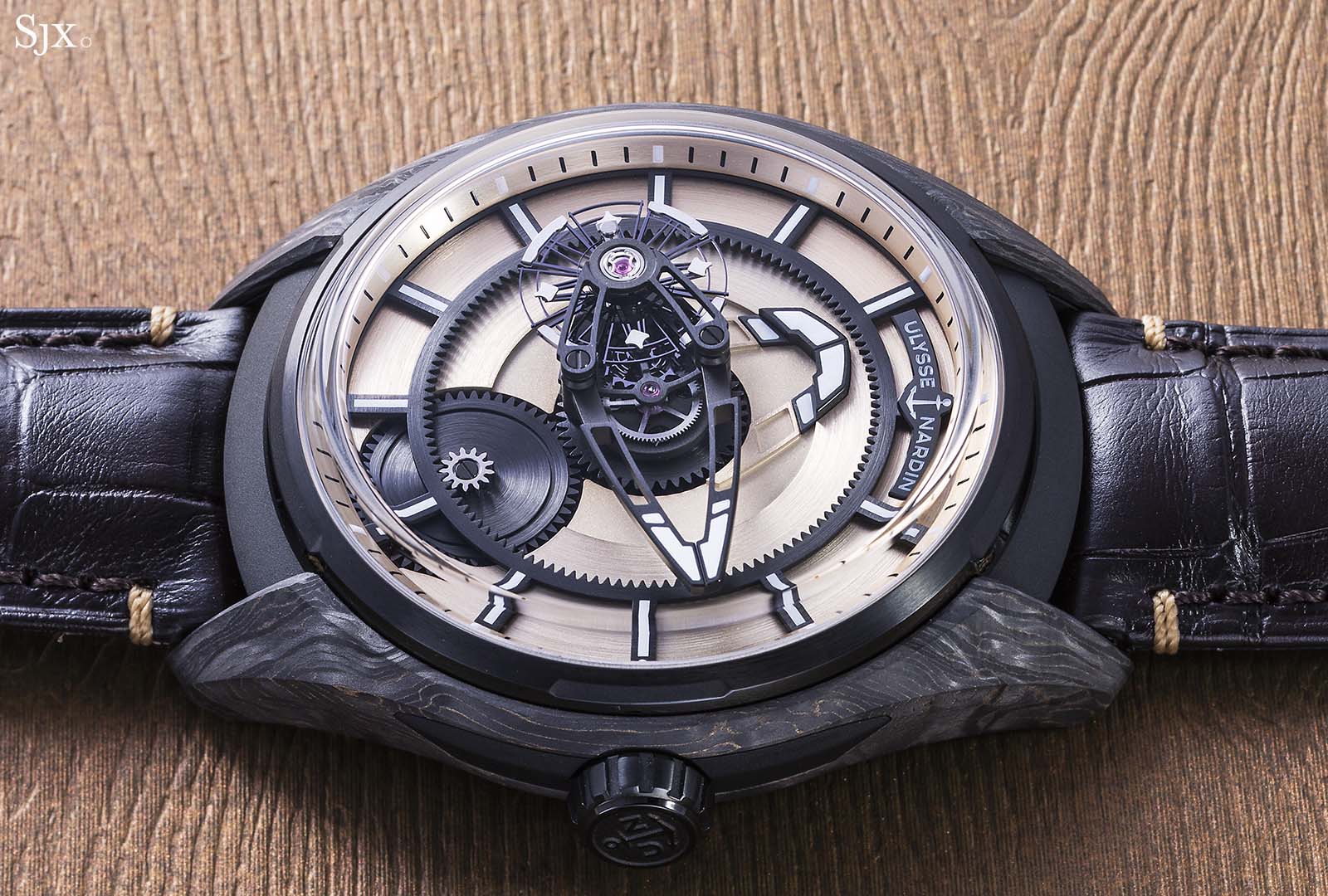 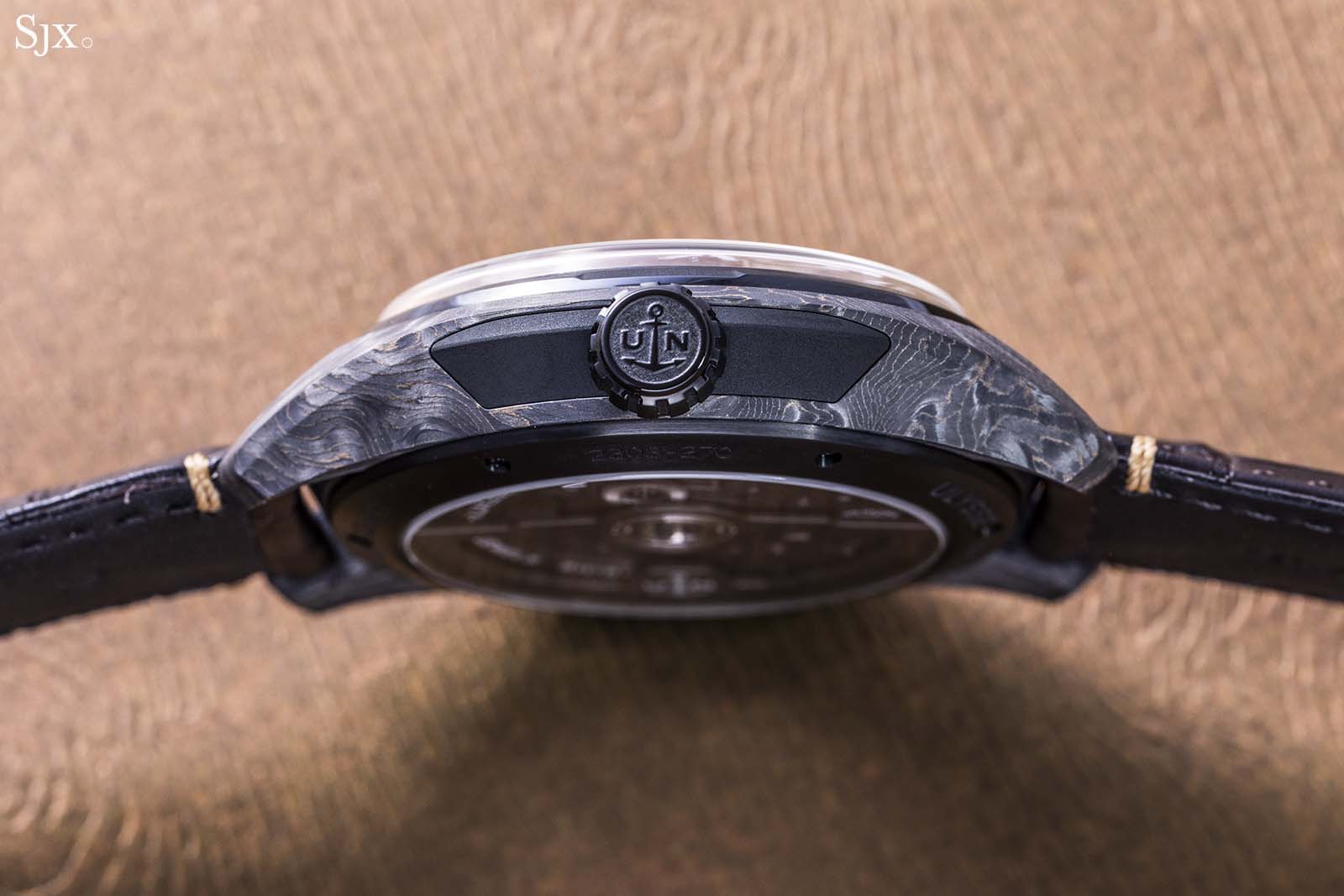 Unusually, the carbon composite used here is actually recycled and eco-friendly. According to Ulysse Nardin, the material has 40% less environmental impact than conventional carbon composites as it is obtained from the offcuts that come from aircraft component production.

While the standard Freak X uses standard Carbonium for the case, the edition for The Hour Glass is a carbon composite mixed with gold leaf, which creates fine gold strands embedded within the layers of the marbled carbon composite. The effect is very subtle and only apparent upon proximity. The material is a novel variation of a material widely used for high-end watch cases, making it different, which has appeal in itself. 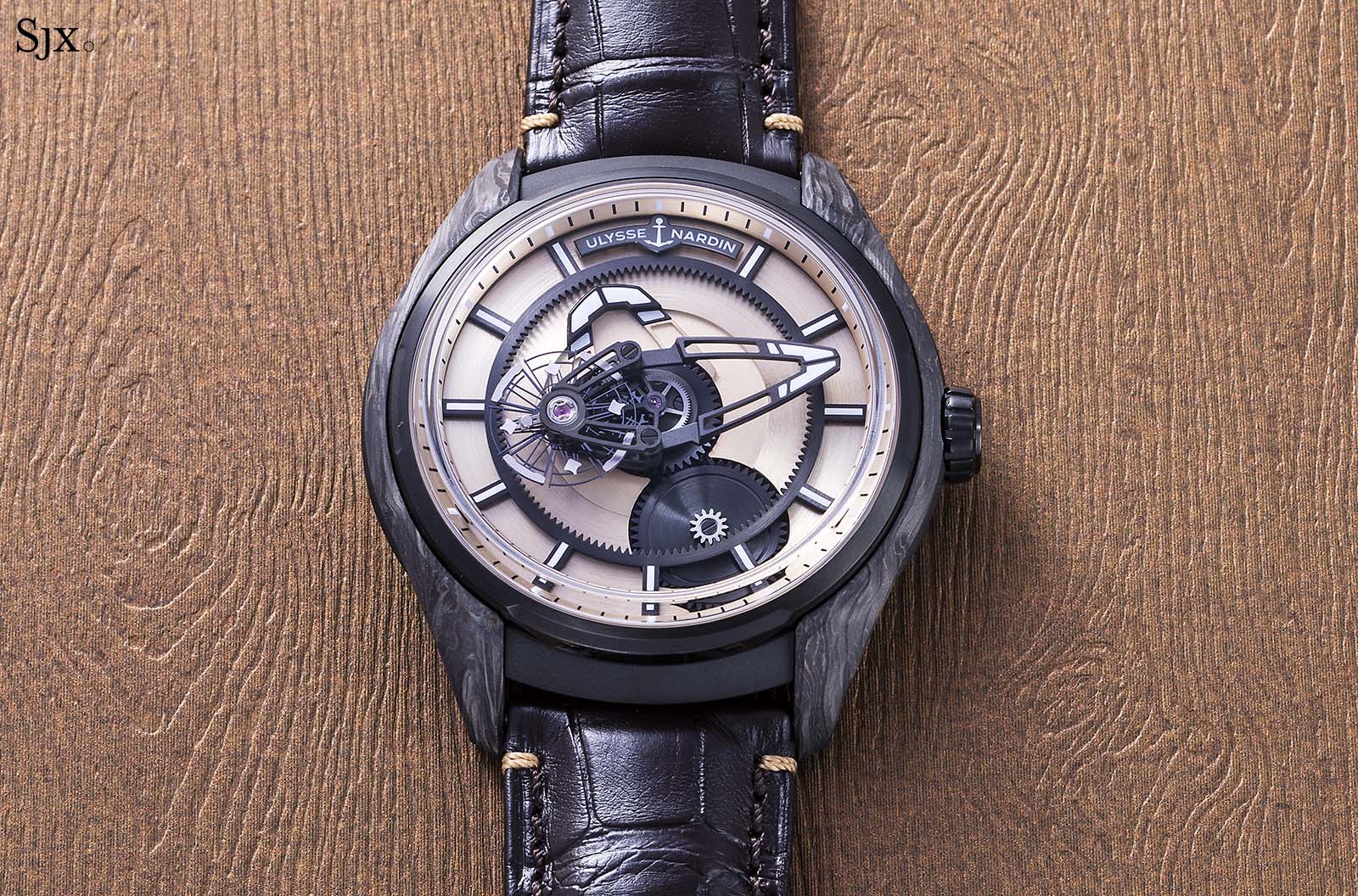 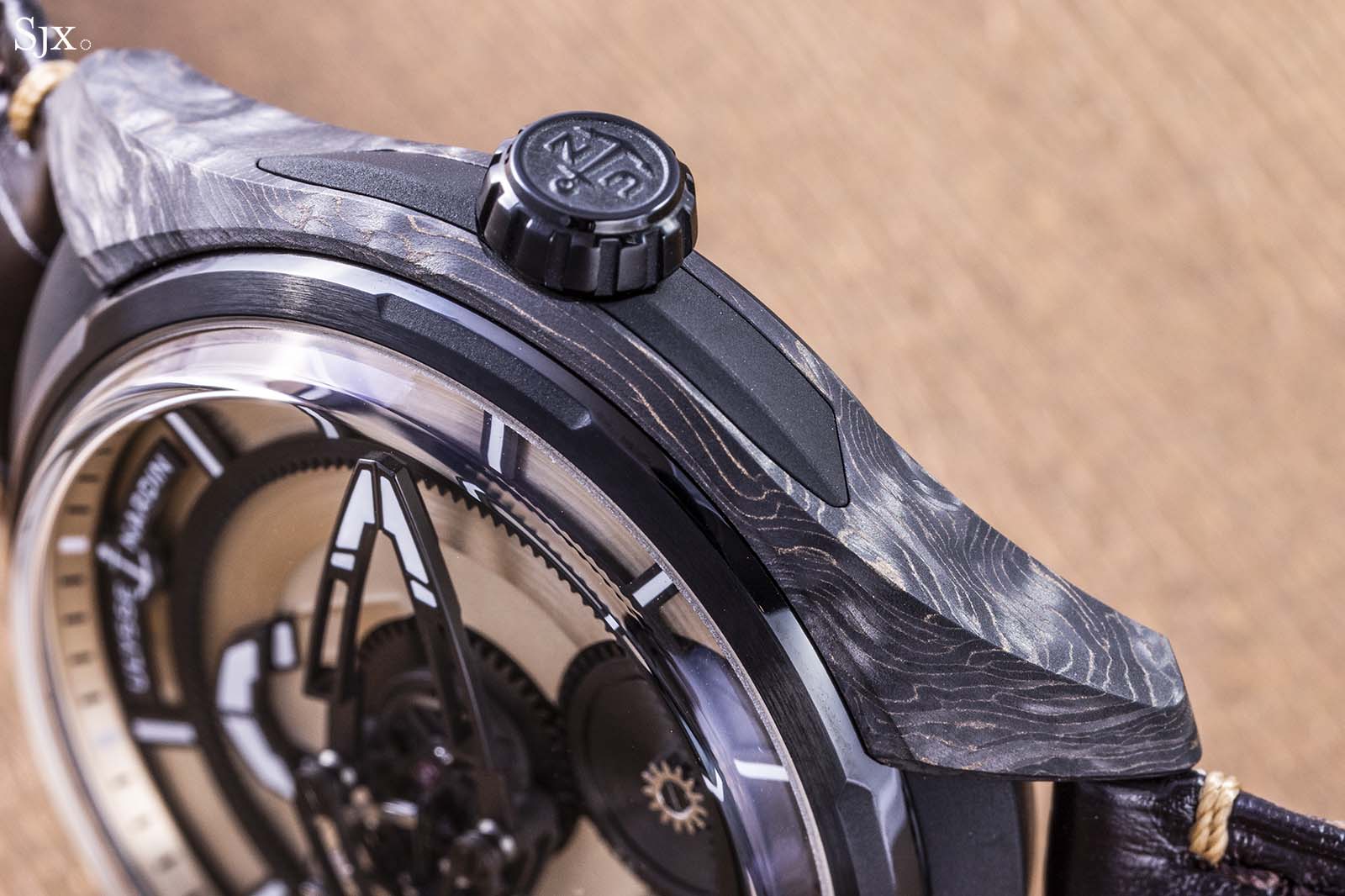 Beyond the time display, the reformed Freak movement forgoes a signature feature of the original Freak – the time-setting bezel and notched case back that winds the mainspring – in favour of a crown, perhaps the most contentious aspect of the revamped movement construction as it creates a case silhouette identical to that of an ordinary watch.

It is worth noting, however, that the bezel and back of the original Freak were the solutions necessary as a result of having a massive mainspring that filled the entire case back. With a conventional automatic movement as its base, that is unnecessary in the Freak X. 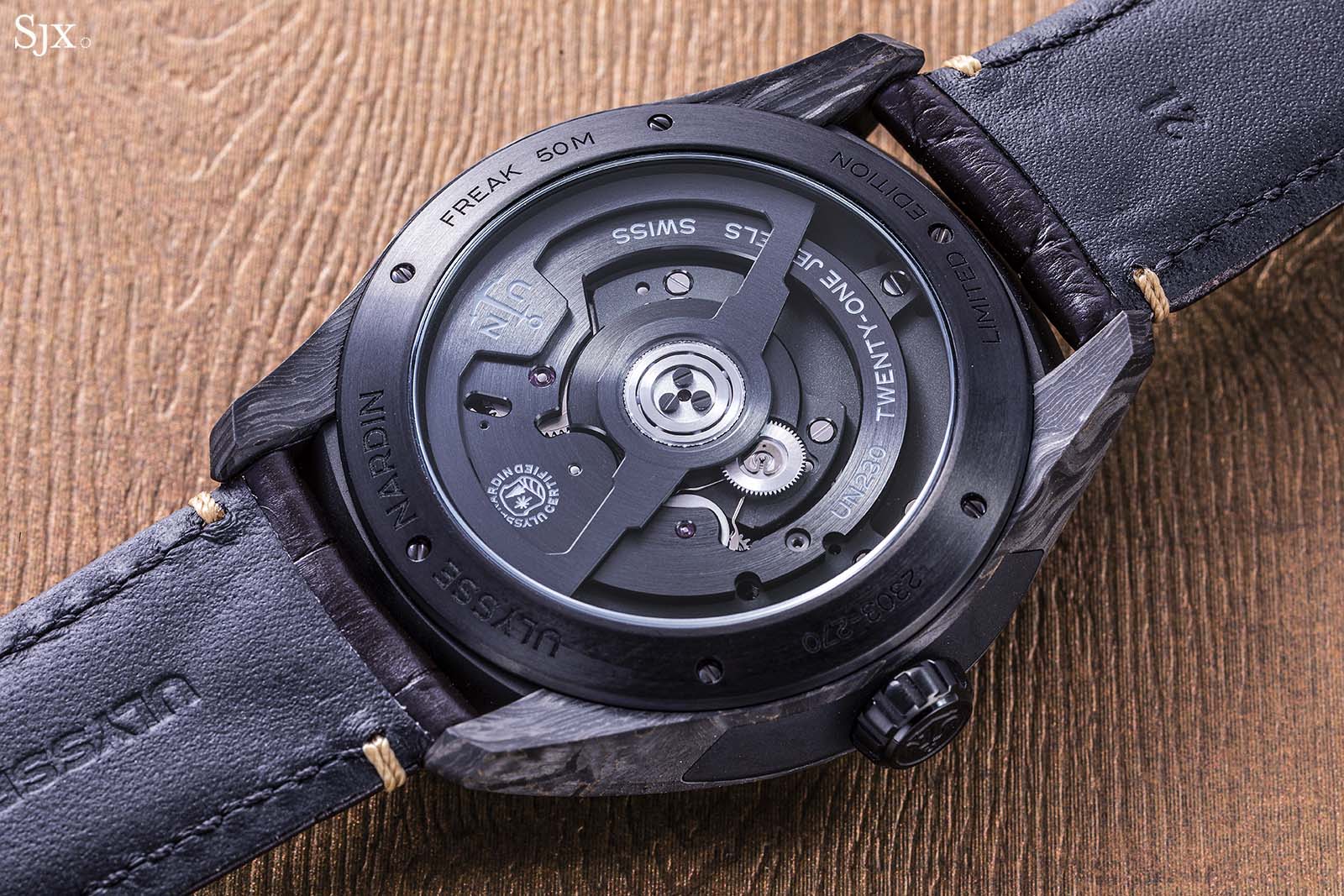 Visible through the sapphire case back, the rotor, bridges and baseplate of the UN-230 are all finished in black, with the V-shaped “Magic Lever” visible just below the central pivot.

The movement offers a 72-hour power reserve, which is shorter than the week-long power reserves of regular Freaks, but still decent and respectable. 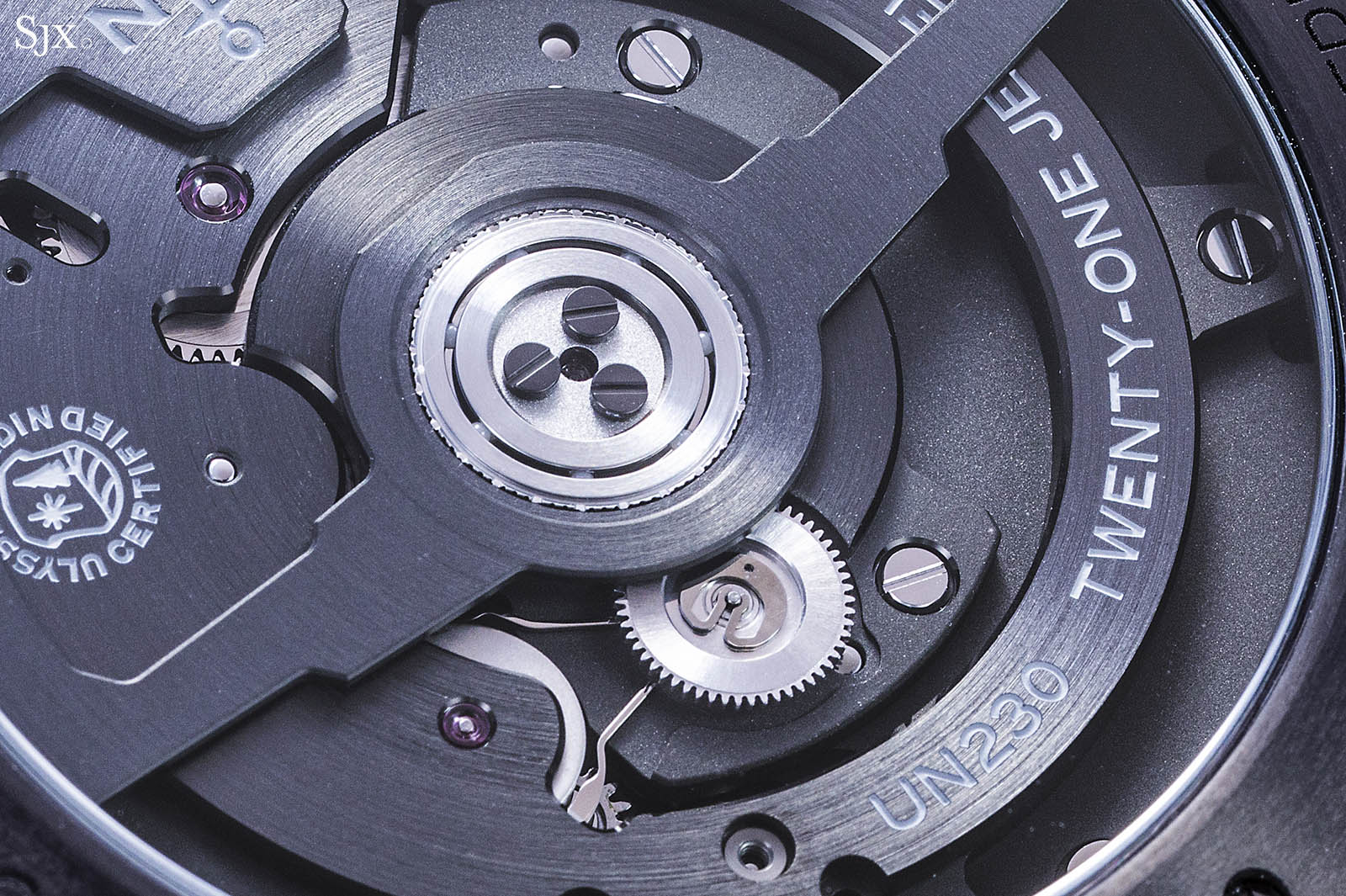 The Ulysse Nardin Freak X “The Hour Glass” is an undeniably striking iteration of what is already a compelling value proposition.

The high contrast between the dial and hands brings a greater emphasis to the revolving escapement – a concept that till today remains a rare feat in watchmaking, let alone at this price point.

Compared to the standard model, this edition of the Freak X costs approximately 15% more, which is fair and acceptable.

The Ulysse Nardin Freak X “The Hour Glass” is limited to 30 pieces and is priced at 38,500 Singapore dollars. It is exclusively retailed at The Hour Glass and is already in stores.

A skeleton dressed in blue.