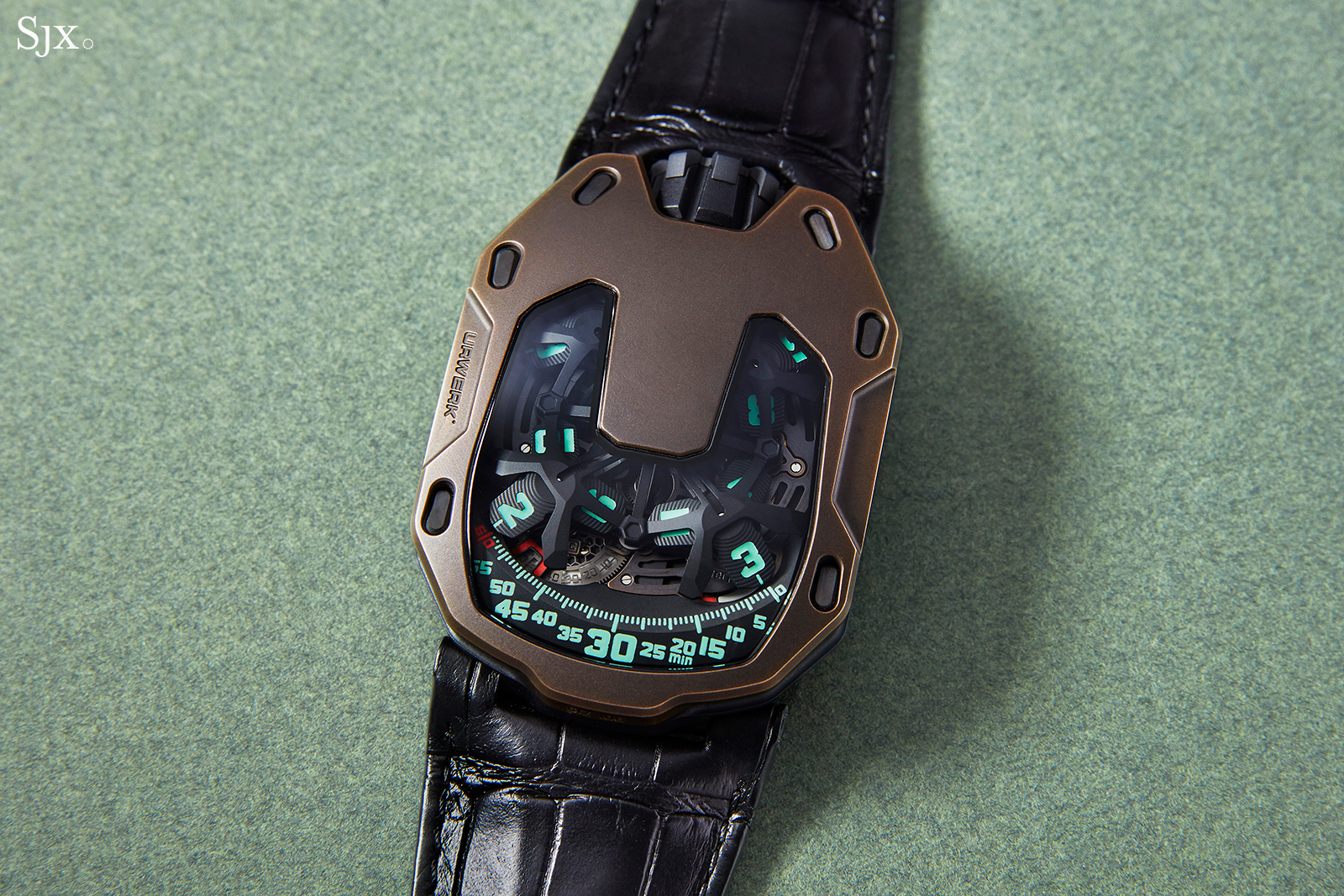 Singapore retailer The Hour Glass kicked off its 40th anniversary limited editions with the all-platinum Audemars Piguet Royal Oak Chronograph, now followed by a pair of watches from leading independent watchmakers, De Bethune and Urwerk. The Singapore retailer is getting a three-piece limited edition based on the current UR-105, but one that’s also a throwback to the brand’s early creations.

In aged bronze and titanium, The UR-105 “The Hour Glass” similar to the UR-105 CT Bronze unveiled earlier this year, but streamlined and sans the sprung lid over the front – a simplification of the design that’s also an improvement.

Appropriate enough for a retailer that’s been selling Urwerk for 15 years, the commemorative edition features elements borrowed from Urwerk models over the years, creating a watch that’s a nostalgic reminder of the brand’s foundational watches from the early 2000s. 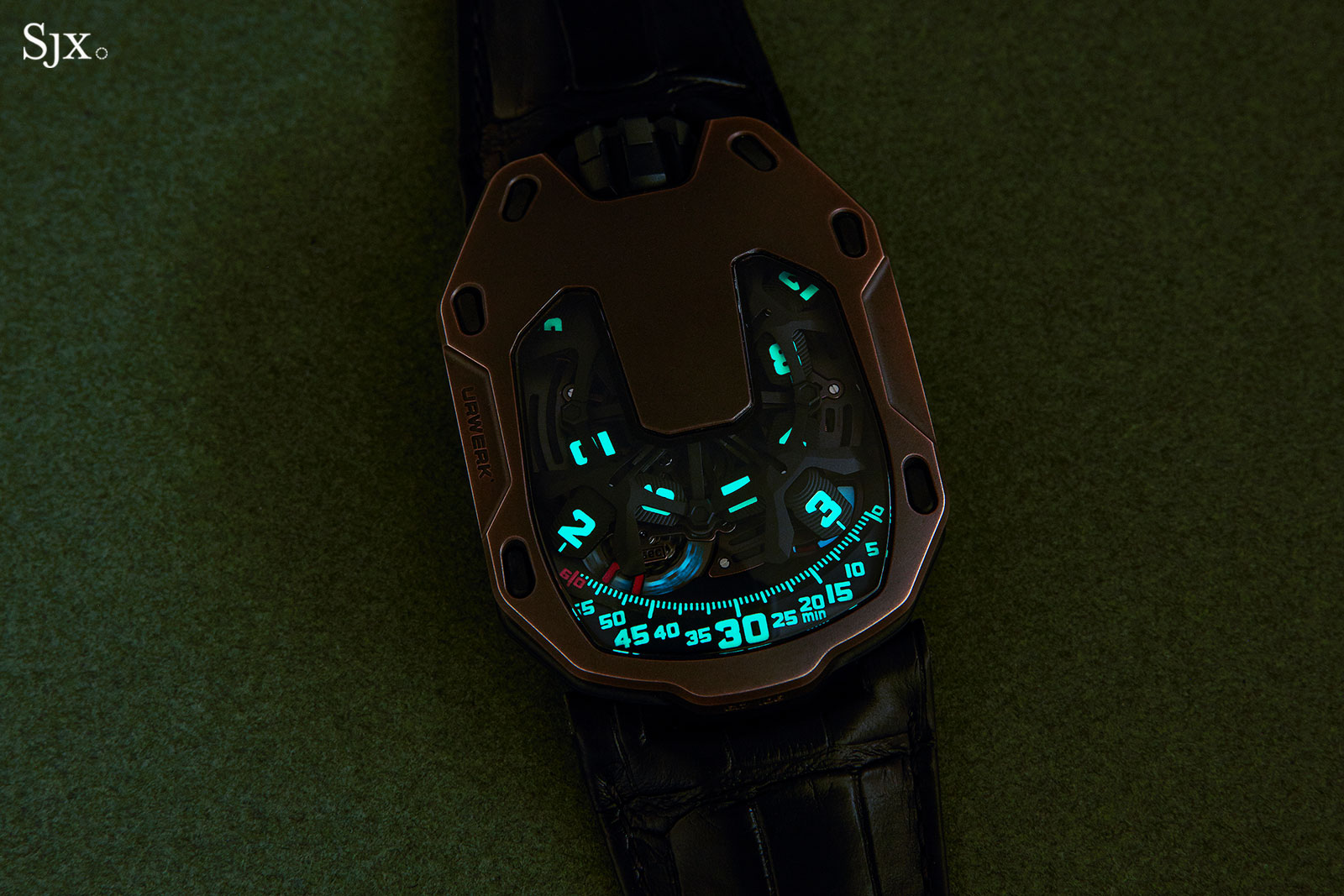 The UR-105 was launched in 2014 as the successor to the UR-103, first launched in 2003. The bestselling Urwerk to date and arguably the brand’s signature watch, the UR-103 was the watch that made Urwerk a champion of avant-garde mechanical watchmaking.

A nod to that milestone watch, the commemorative UR-105 features a U-shaped sapphire crystal, just as it was on the UR-103.03. While the very first version of the watch, the UR-103.01, featuring a narrow, curved window for the time, the UR-103.03 of 2005 expanded the view with a far larger crystal. 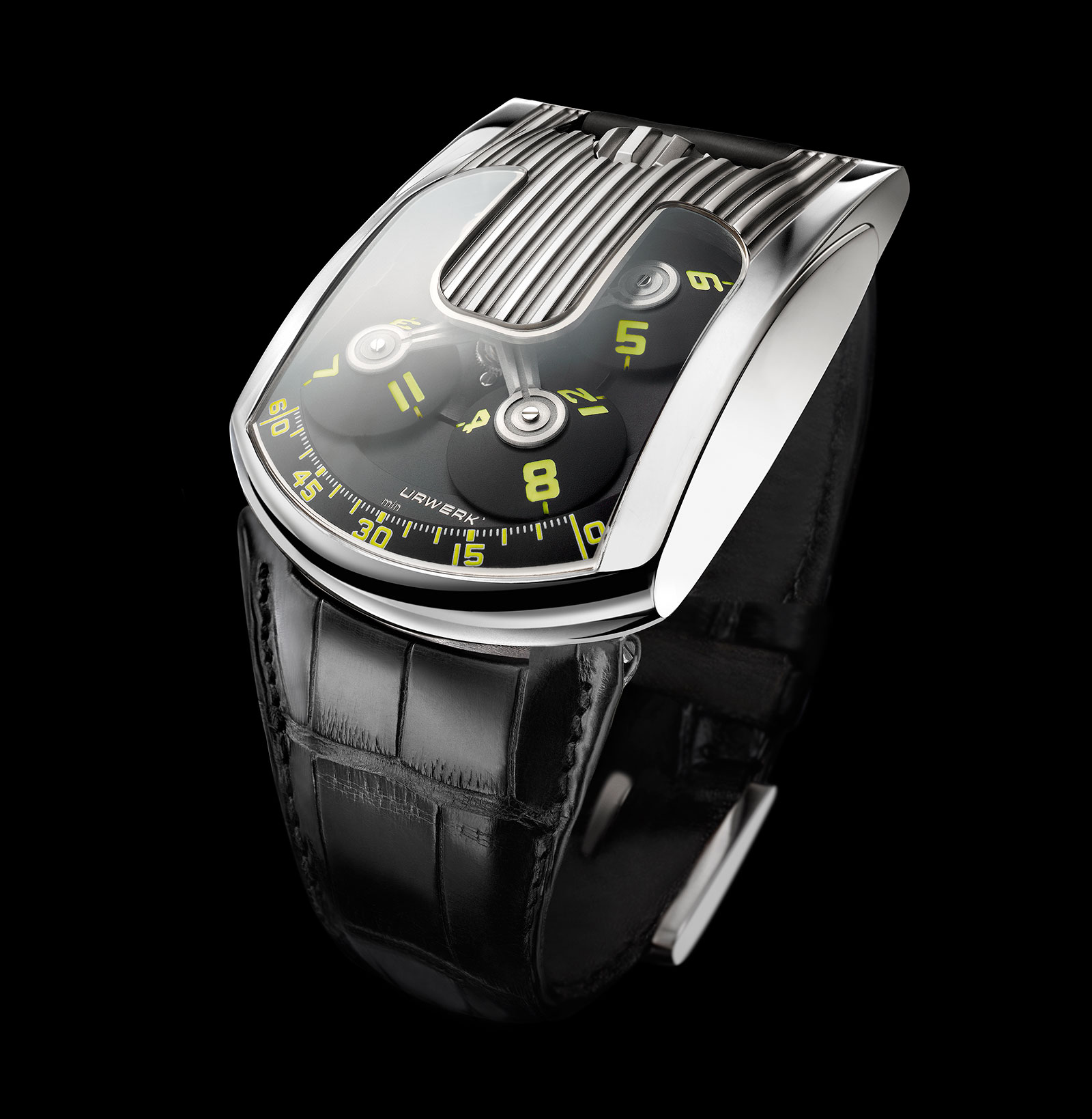 The purpose of the U-shaped crystal was to reveal the mechanics behind the wandering hours display, essentially to show off the four hour satellites and the carousel that carries them. And that has now been reproduced on the commemorative UR-105. 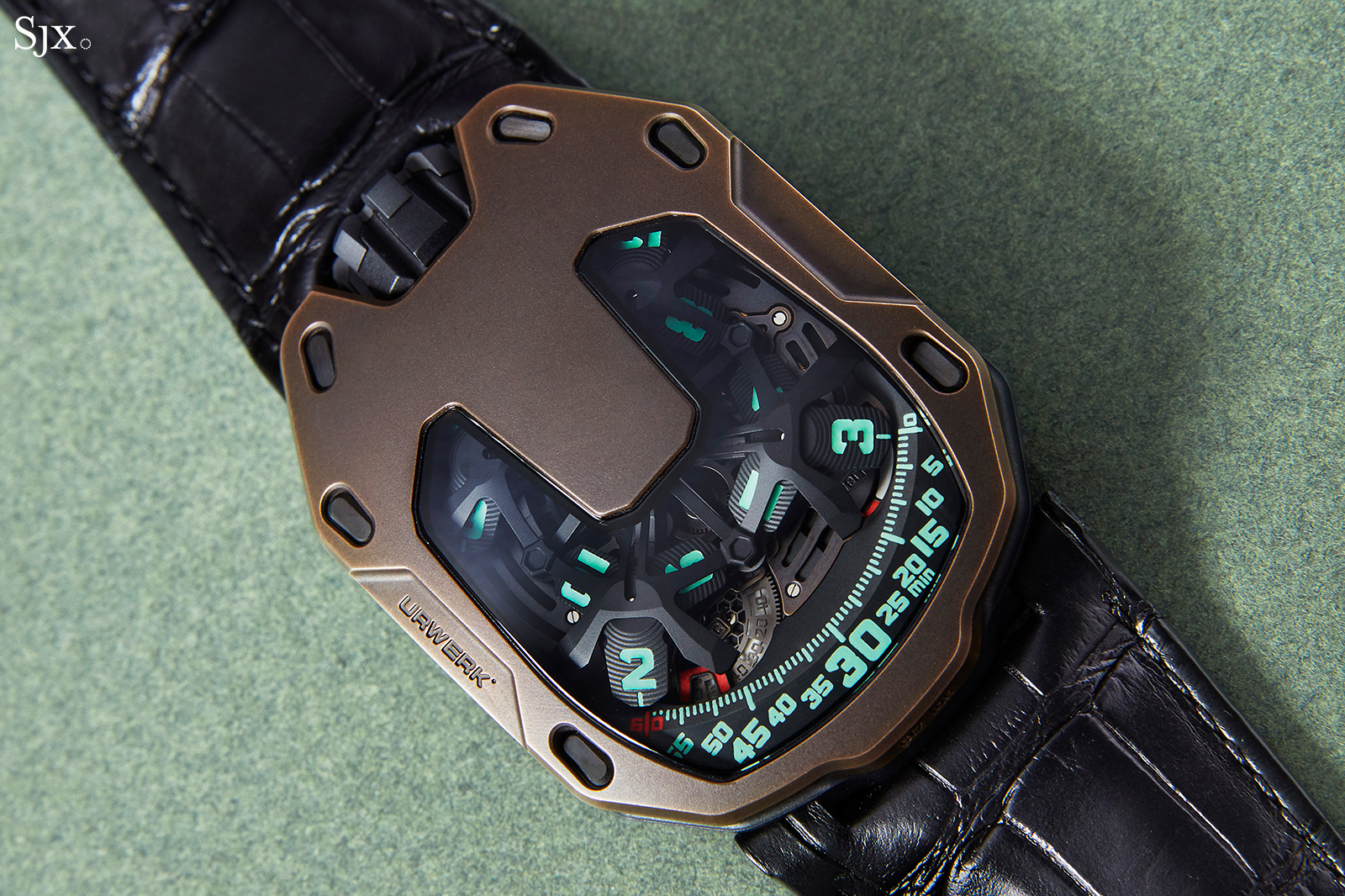 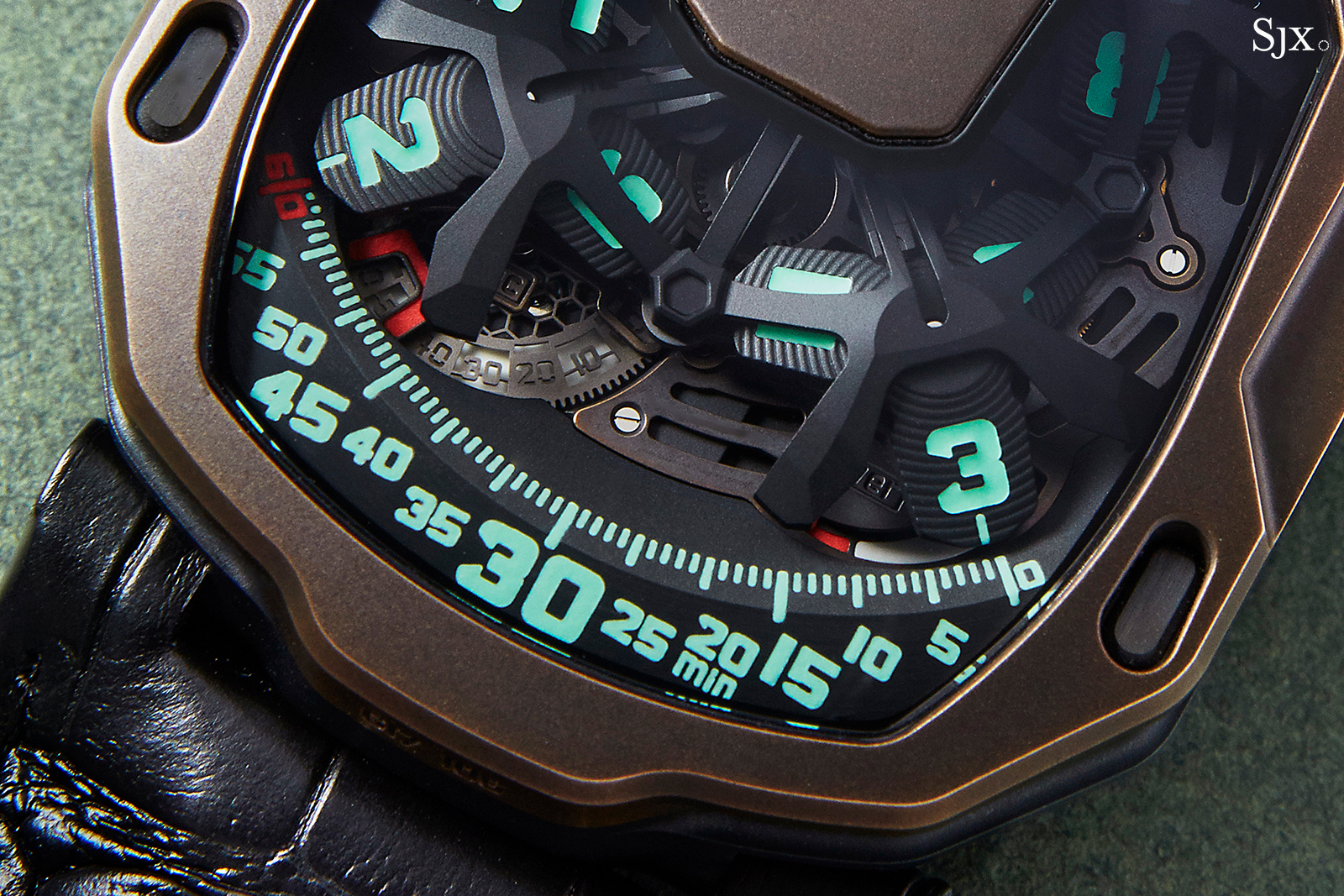 The time shown is just past 3 o’clock

Because the UR-105 is a significantly more complex watch than the original UR-103, the crystal serves a greater purpose; there’s simply more to see.

The black-coated aluminium carousel inside the UR-105 “The Hour Glass” is open-worked, revealing the hour satellites, each with three hour digits. Under each satellite is also a bit of bronze: the Maltese crosses that drive the satellites are cast in beryllium bronze.

The open-worked carousel reveals the honeycomb seconds disc (on the lower left corner) and power reserve indicator (on the right), features only available on the open-worked versions of the UR-105.

The power reserve is straightforward, indicating the energy left in the mainspring on a coloured scale; on full wind it’ll run for 48 hours or so. The seconds display is more interesting. 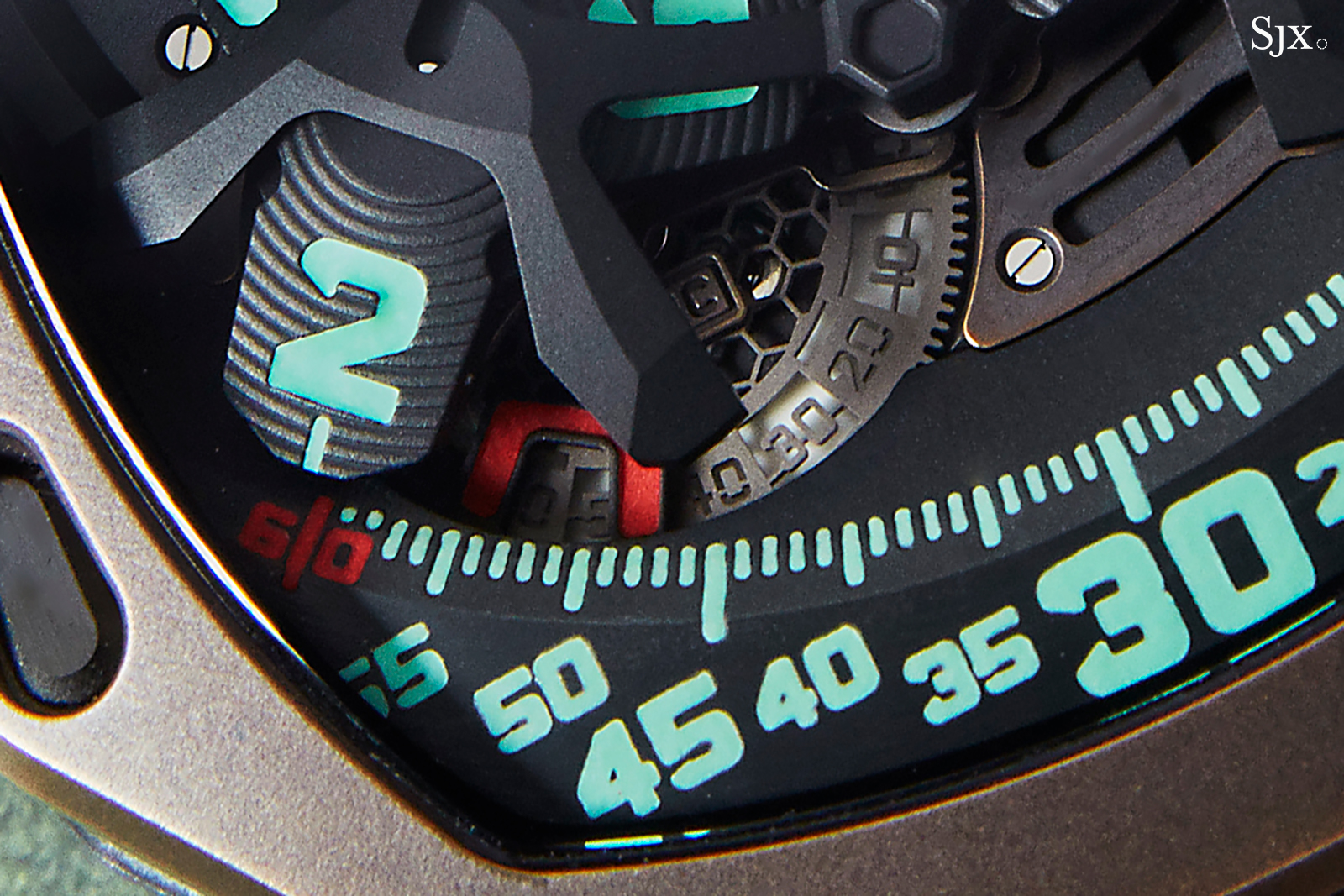 Seconds are indicated by a red frame over the open-worked seconds disc, but because the disc is graduated in tens, it is more of an approximation. Nonetheless, the constant motion of the minutely detailed disc is one of the most compelling elements of the watch.

Creating the honeycomb seconds disc required a high-tech process known as photolithography, also used to fabricate printed circuit boards and microprocessors. It allows the disc to be both intricate in miniature and lightweight. The seconds disc weighs less than a tenth of a gram – crucial because of its continuous movement.

In the dark the watch lights up, literally. In the daytime, the luminous material is in its natural colour, which is a plus. While most of the watch industry pairs bronze cases with faux-aged “lume”, often an unnecessary affectation, Urwerk opted for green Super-Luminova, a welcome choice. 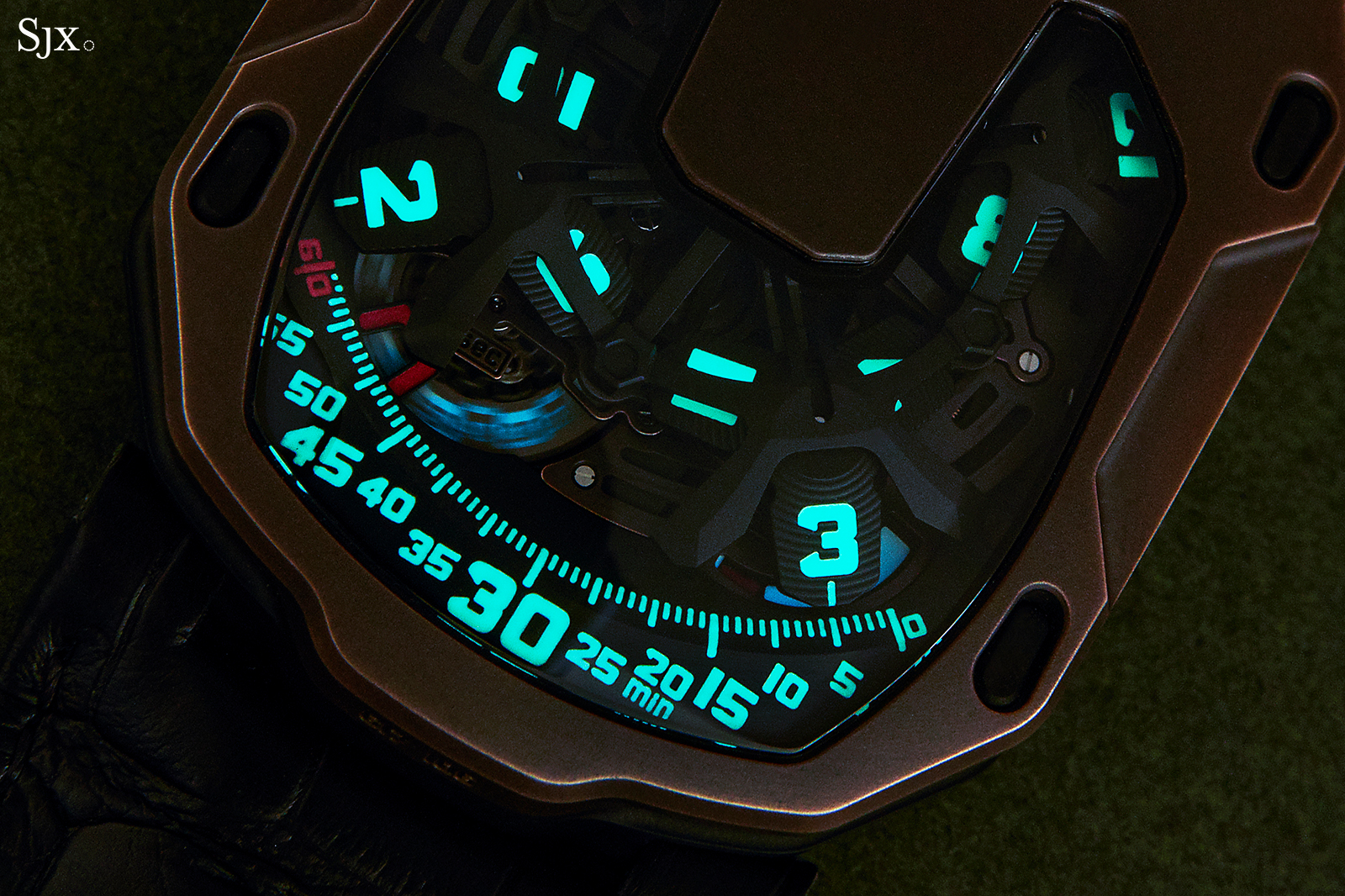 This UR-105 straddles two schools of design, combining the look of a medieval weapon with Urwerk’s traditional sci-fi styling. The aged, steampunk aesthetic of the bronze bezel makes for an interesting departure from the modern look that most Urwerk timepieces embody.

Secured by visible oblong pins that extend from the titanium case below, the bronze front of the UR-105 “The Hour Glass” is matte and muted, having been finished to create a slightly aged look, though one less extreme than on the UR-105 T-Rex from 2016. 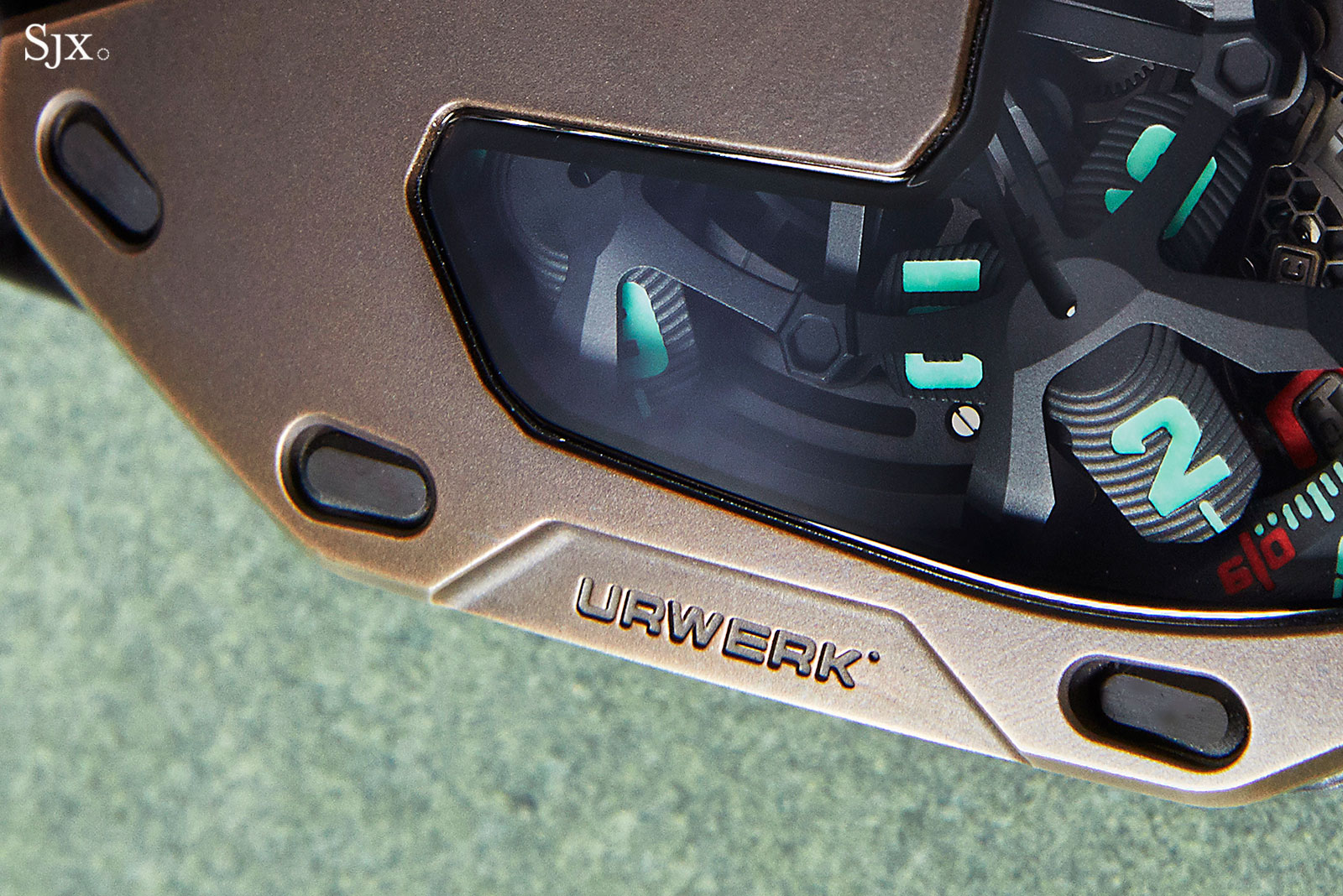 The pins securing the front visible on either side of “Urwerk”

Because of the large, flat and smooth surface, however, the future patina should be an interesting one, since even the most minor of surface variations will be obvious. But unlike the UR-105 CT Bronze, this does away with the hinged lid, meaning the wearer has no reason to touch the bezel, presumably slowing the oxidisation. 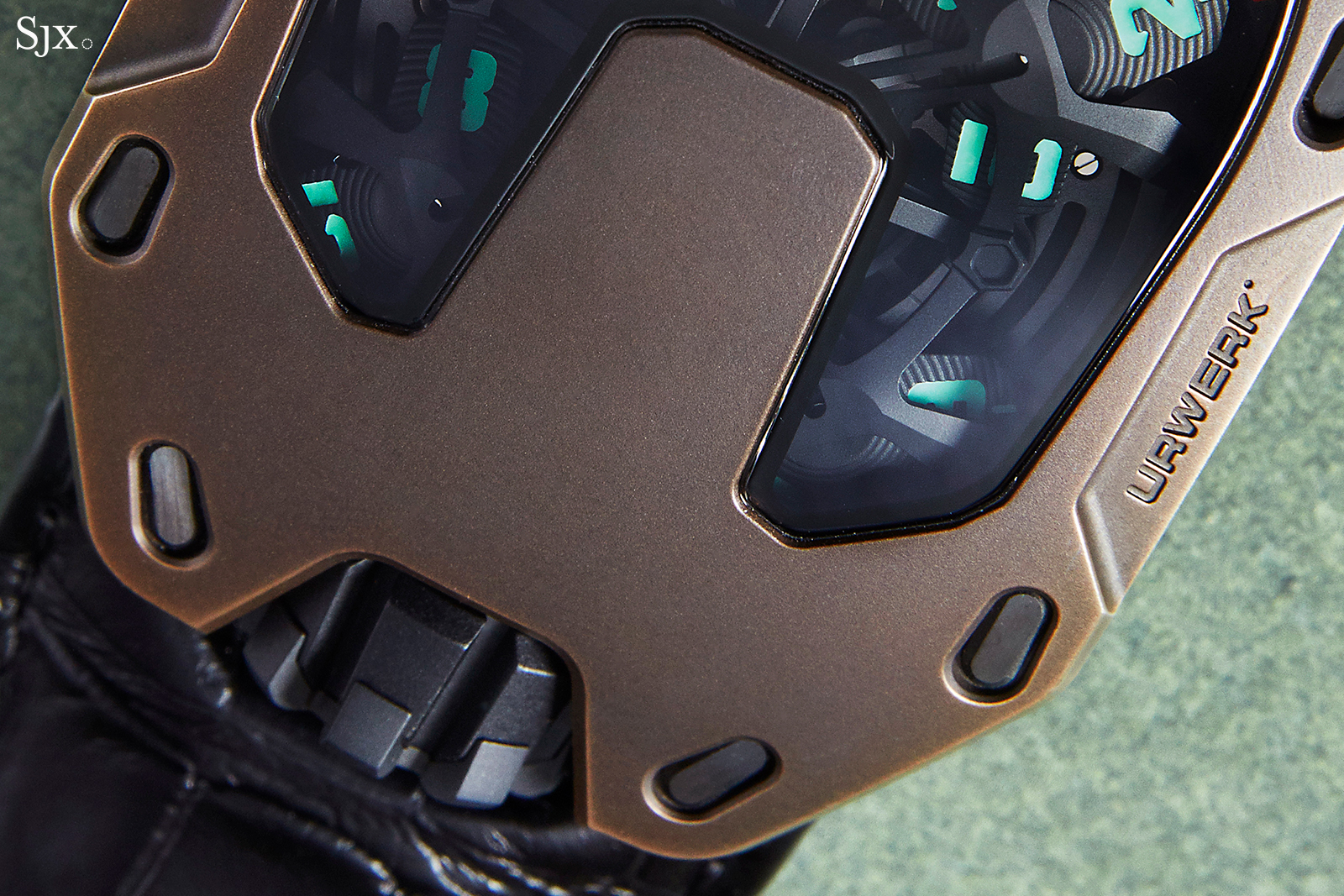 Like other Urwerk models, the watch appears much larger in photos than on the wrist, one reason being its lack of protruding lugs.

The dimensions are identical to the standard  UR-105, 39.5mm wide with a length of 53mm. The thickness of the watch is 17.8mm, making it a thick watch but one that is well proportioned. 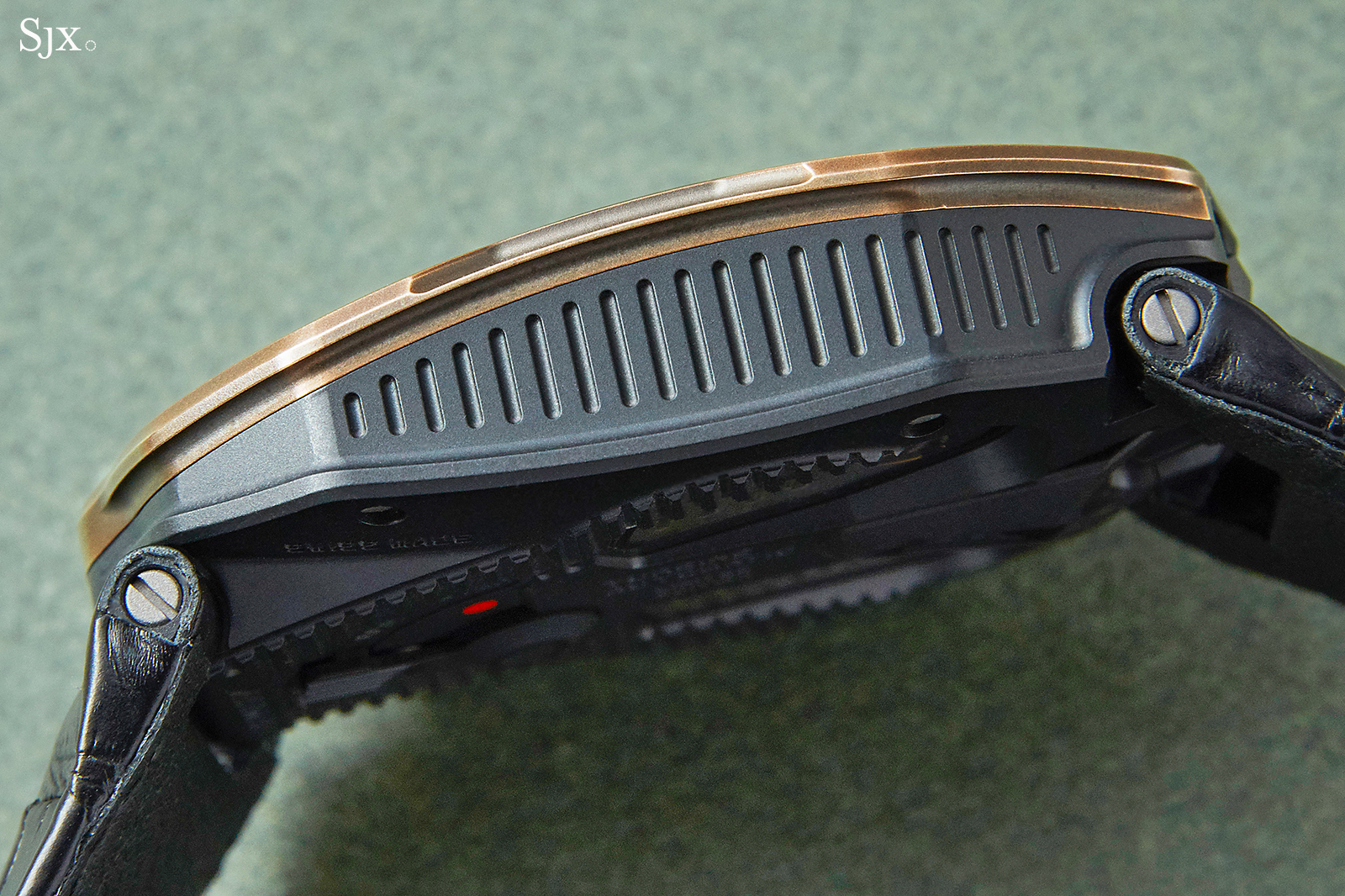 The titanium case means the watch is light and comfortable enough, despite its bulkiness. But flatness of the case back, coupled with its length, however, means that it might not sit perfectly on smaller wrists.

The back of the Urwerk UR-105 is quintessential Urwerk, showing the “turbine” automatic winding, a nifty mechanism designed to optimising winding efficiency based on the wearer’s physical activity.

So someone sitting at a desk should have the watch on maximum winding, while someone playing tennis should stop the winding mechanism (though its ill-advised to play tennis with a mechanical watch, unless worn on the non-playing arm). 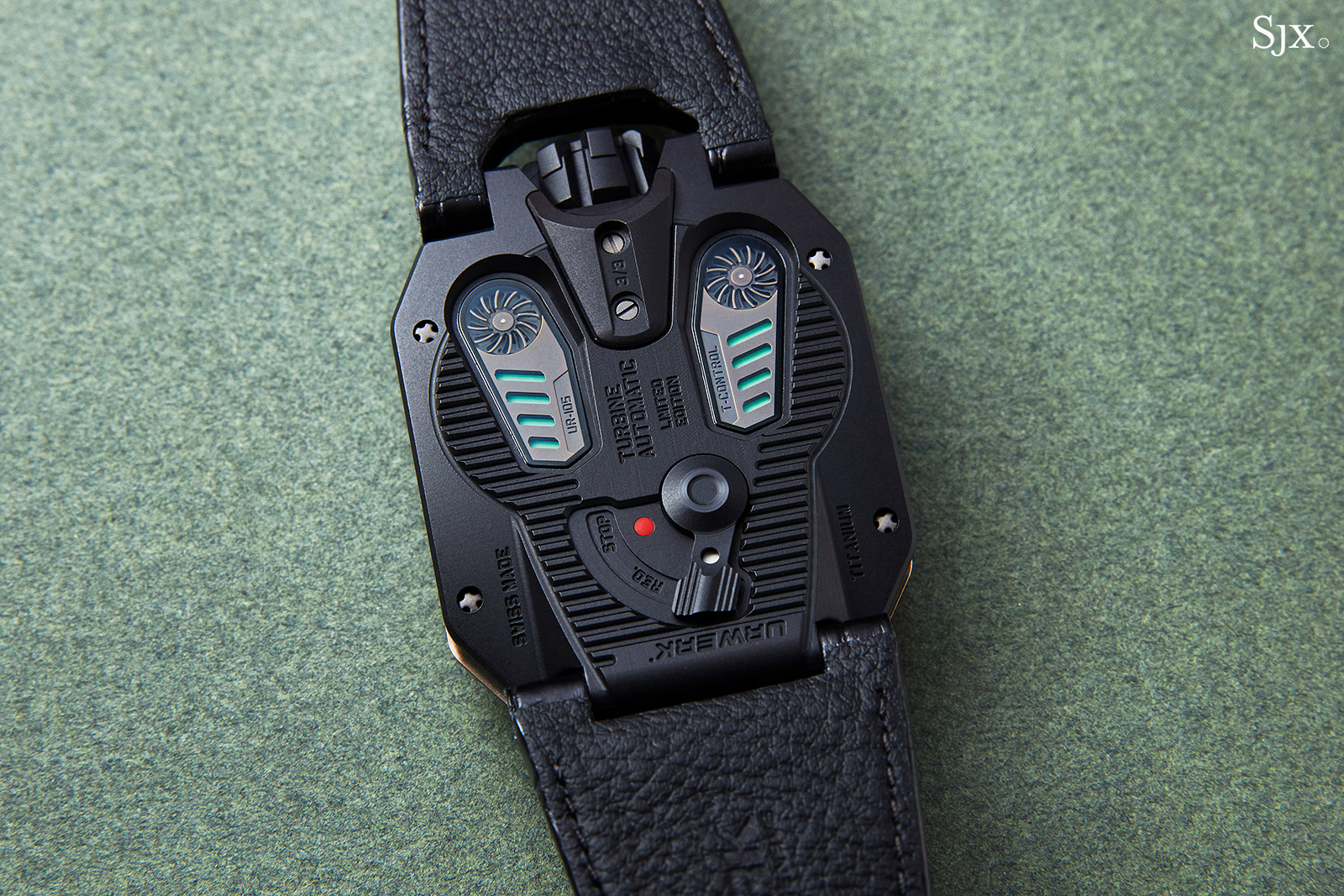 Just below each turbine is slatted display that indicates the winding setting. That’s controlled by a lever with three settings: “full” is painted in green SuperLuminova and means maximum winding for the desk-bound, “red” means reduced winding for moderate activity, and “stop” disengages the winding system, meaning winding is only possible manually via the oversized crown at 12 o’clock. 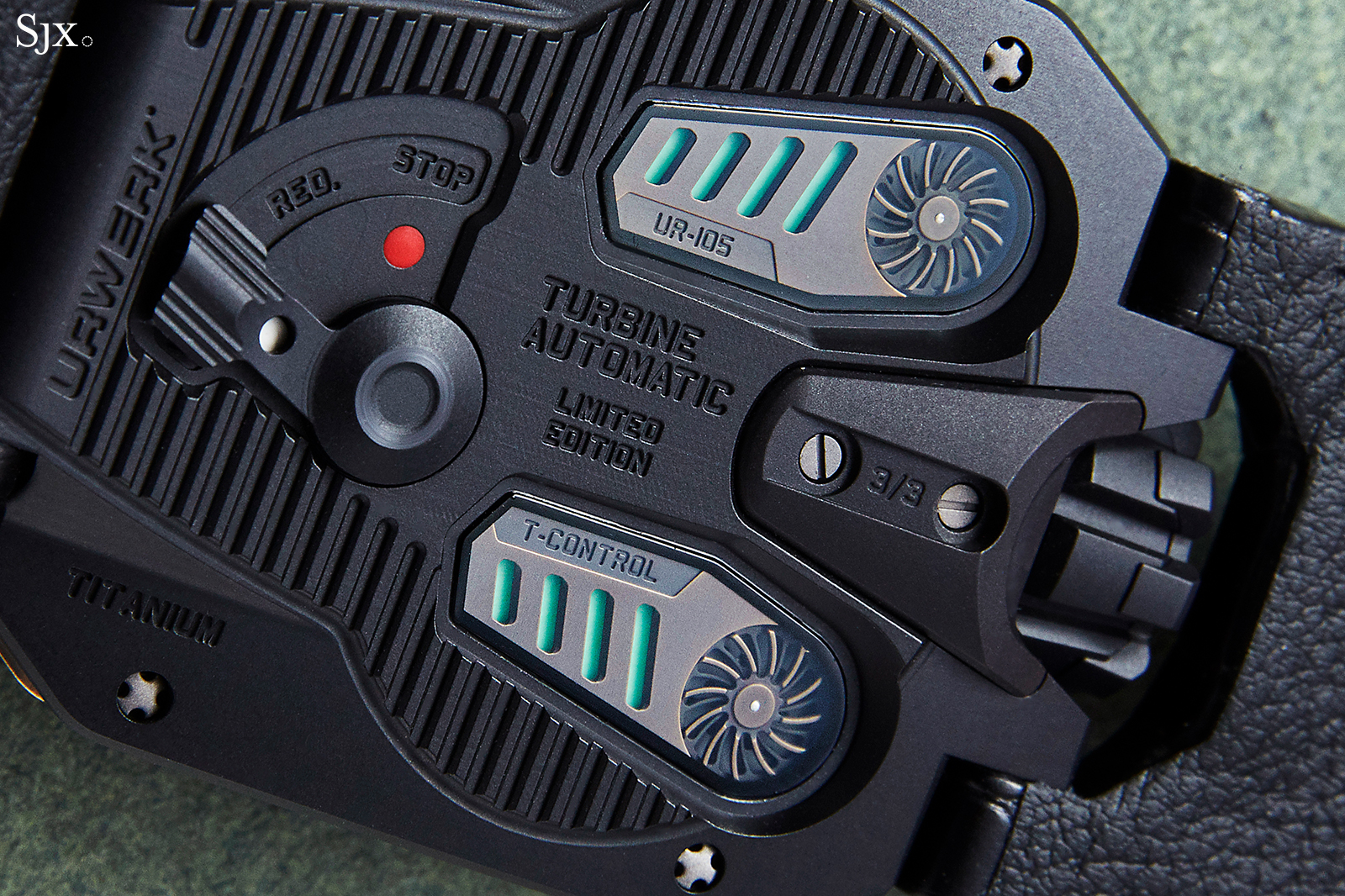 Several current Urwerk models seem to try too hard; the hinged lid on the standard UR-105 is an example. So even though the UR-105 “The Hour Glass” isn’t that different from the standard model, it is an improvement, focusing instead on the key elements while also being a reminder of the exciting early years of the brand.

The only downside is if Urwerk puts the lidless UR-105 into regular production, which would diminish the appeal of this edition.

The Urwerk UR-105 “The Hour Glass” is priced at 100,100 Singapore dollars, which is about US$73,300. Already available at The Hour Glass stores, it’s is limited to just three pieces.