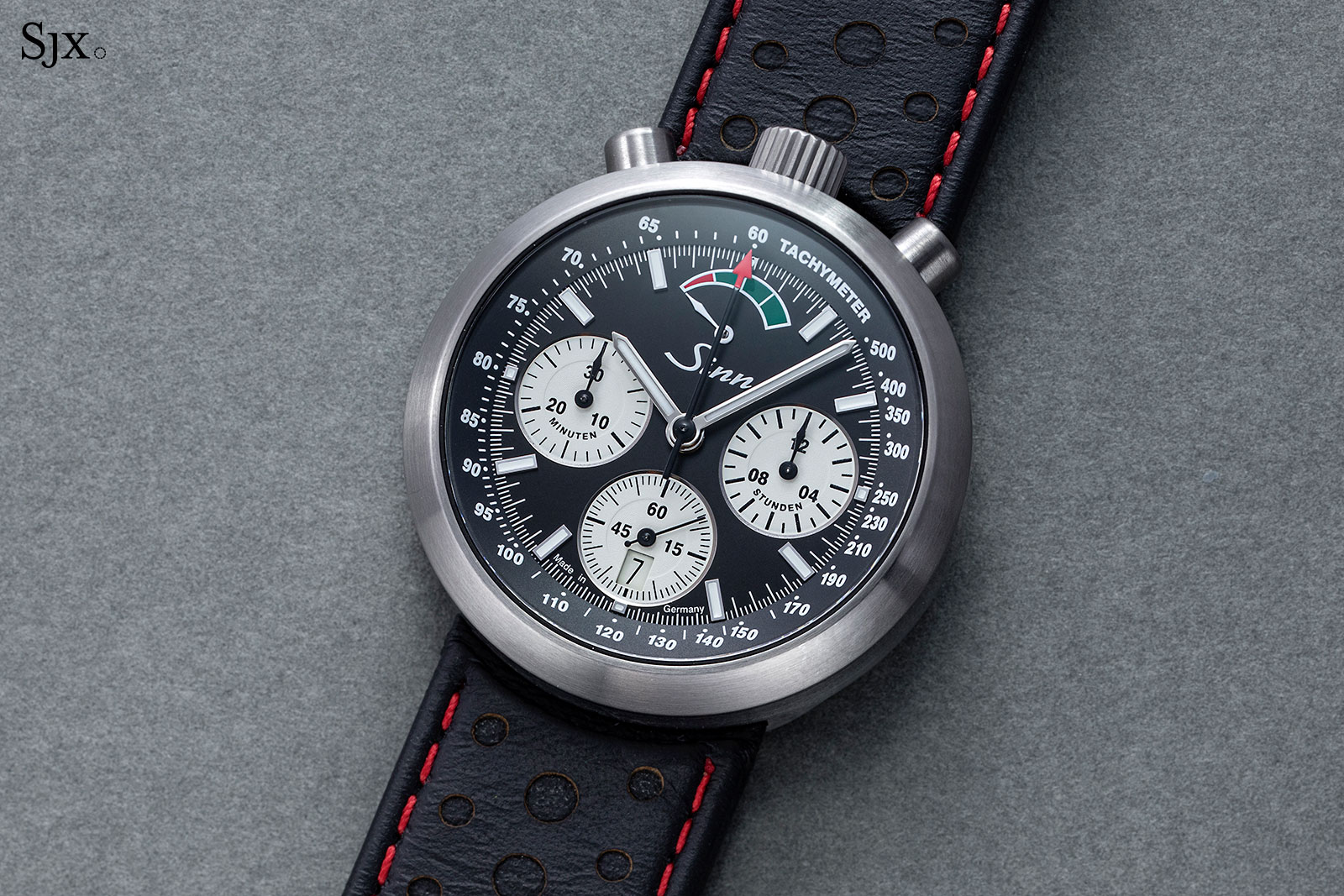 Announced just a few months ago, the R500 Chronograph was unexpected for Sinn. Retro and funky at the same time, the R500 departs from the typical Sinn fare of no-nonsense, aviation-instrument watches.

The R500 is straight out of the 1970s in style, with a hockey-puck case that has the pushers and crown at 12 o’clock, a retro configuration often known as “bullhead”. But like all Sinn watches, the R500 is a big, robust, and functional timepiece. The diametrically opposite blend of retro fun and tangible seriousness lies behind the R500’s appeal. 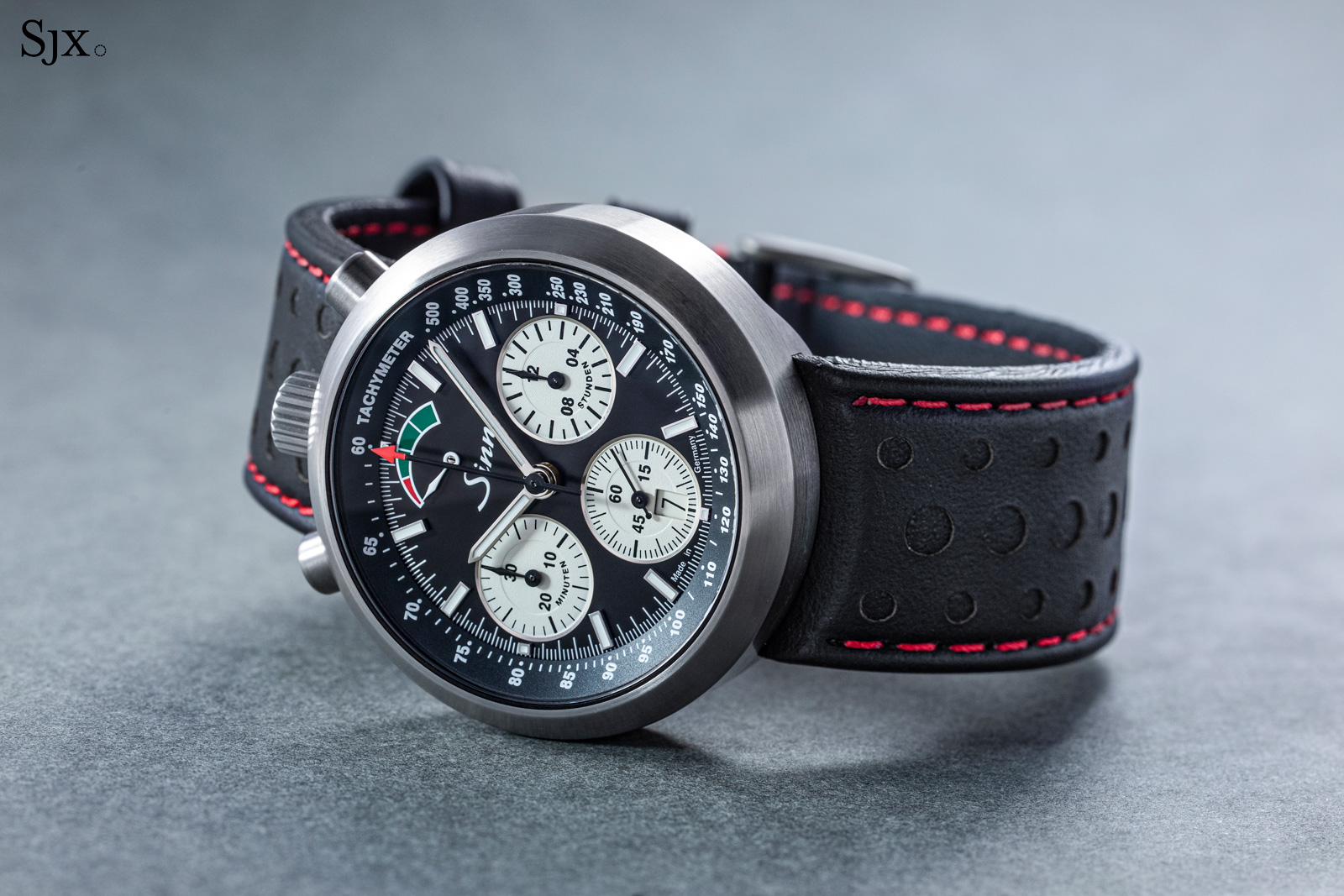 Though best known for their utilitarian, and almost military, style, Sinn sometimes creates novel designs, often for specific markets, like the many limited editions made for Japan. But such watches are mostly out of reach for the average buyer, if for nothing but geography and logistics.

The R500, on the other hand, is a limited edition available at Sinn retailers globally, but is also different enough from the brand’s usual watches to make it interesting, especially with the retro “bullhead” layout matched with red and green accents on the power reserve scale.

And the R500 is also unusual in being titanium, instead of steel, which is the metal most commonly used for Sinn watch cases. The handful of titanium watches that Sinn offers are also mostly dive watches.

In fact, the only intrinsic downside of the R500 is the strap, which is a perfect fit in terms of design, but stiff on the wrist and also difficult to swap out. 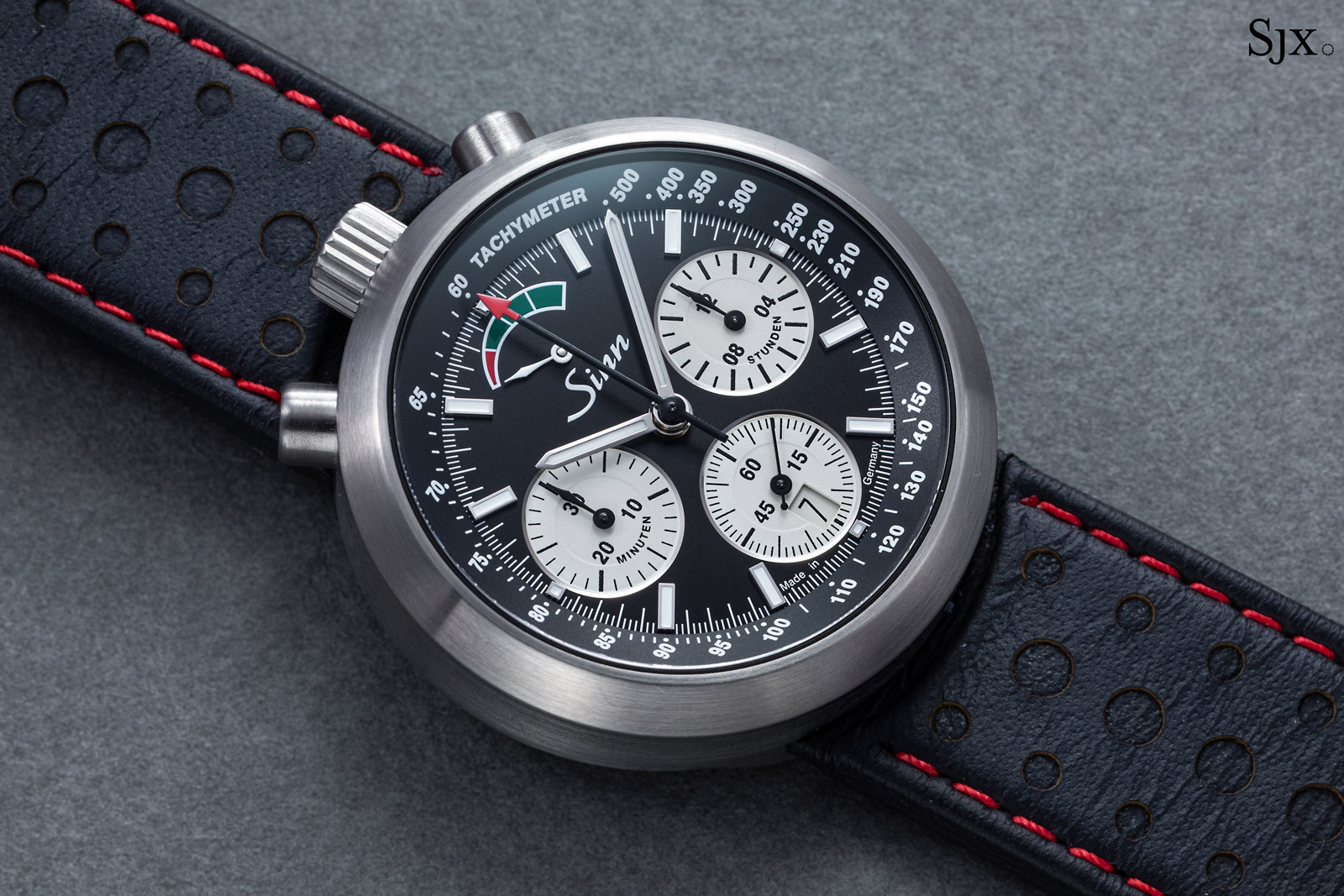 While most Sinn watches offer strong value – the new 105 St Sa is a good example – the R500 sits squarely at the high end of the price spectrum, especially since it’s equipped with a robust but ordinary Valjoux 7750 movement.

The price puts it up against competitors such as the Tudor Black Bay Chronograph, which has a proprietary movement and is probably better value, and the IWC Pilot’s Watch Chronograph that’s less of a value buy but a stronger brand name.

That’s not to say the US$4,380 price tag is exorbitant, because the R500 is well made. That’s especially so for the case, which is a special shape and made in limited quantities, removing economies of scale in production. And it is also different in design and feel; nearly all of its competitors are more conventional sports chronographs.

In essence, the R500 is a vintage remake of sorts, which is something Sinn doesn’t do often. The”bullhead” case gives away its 1970s roots – specifically, a vintage Sinn chronograph from half a century ago.

But the “bullhead” case isn’t an affectation; it serves a functional purpose. This form-follows-function design is very much in keeping with Sinn’s ethos. While the accessibility of the chronograph isn’t much of a concern in everyday situations, it is crucial during driving or flying. 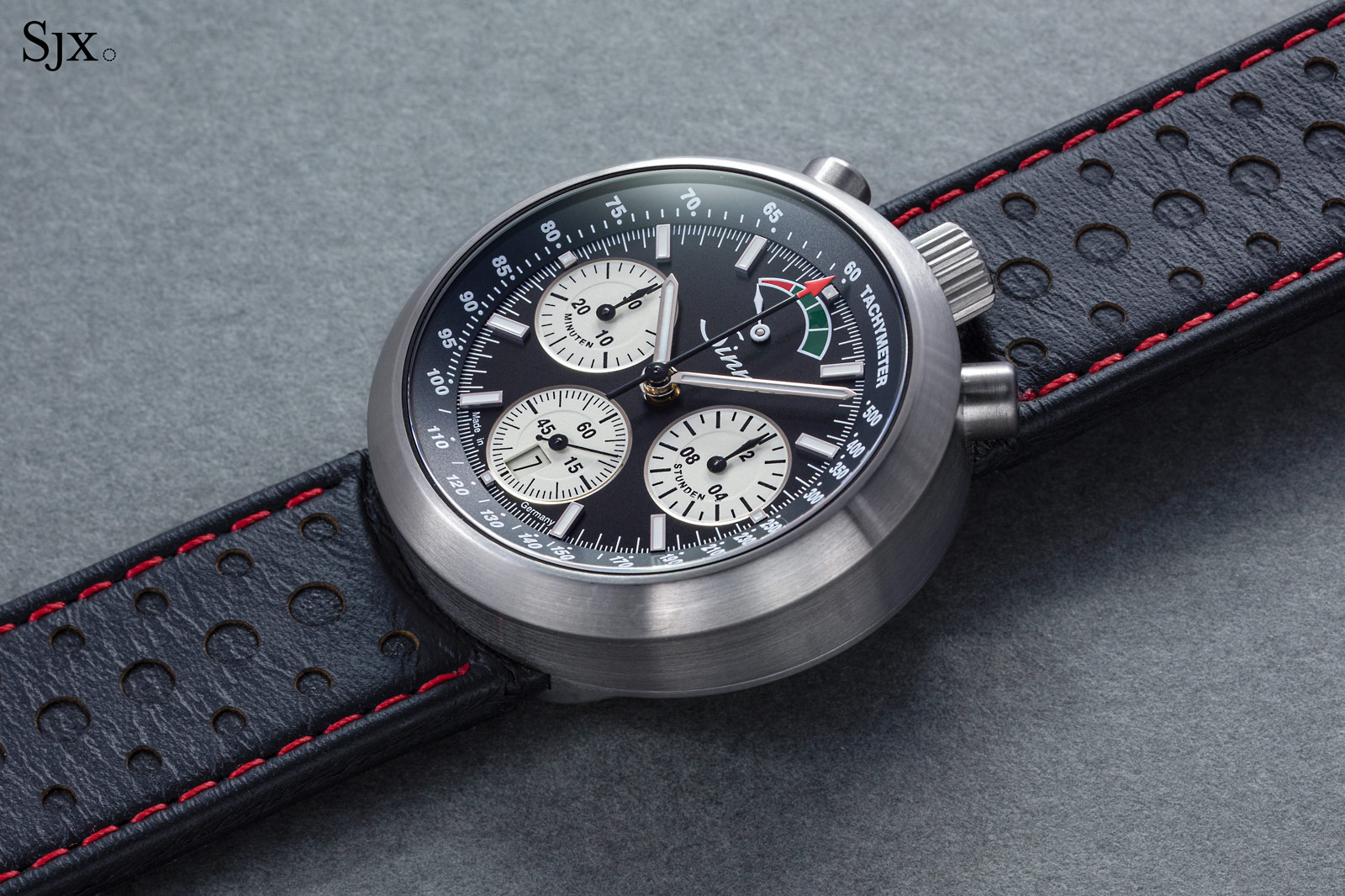 Danish racing driver Peter Göbel explained the appeal of the “bullhead” design during an interview for the launch of the R500. Because the pushers are at 12, the chronograph is more ergonomic, allowing for easier activation of the chronograph with one hand on the steering wheel. In contrast, the wearer would need to cock his wrist slight on a conventional chronograph to access the pushers.

And a “bullhead” chronograph also works well for both wrists, unlike a conventional chronograph that is catered specifically for right-handed individuals. The practical appeal of the “bullhead” format, however, hasn’t made it popularly, leaving it uncommon in modern chronographs, with almost uniformly have pushers located on the right of the case.

That said, the design does occasionally surface in contemporary watchmaking, with a handful of examples scattered across a wide price spectrum. At the entry-level there’s Hamilton, then there’s Omega, and finally a few independents brands at the high end, notably H. Moser & Cie. as well as Singer Reimagined.

The case construction is simple, with a one piece case middle and bezel, plus a case back held with screws. But it is very much a Sinn case, with a water-resistance rating of up to 200 m, as well as resistance to low external pressure (ensuring the crystal doesn’t pop out).

Because the case is wide and thick – 42 mm wide and 16 mm at its thickest – it’s made of titanium, leaving it surprisingly lightweight for its size. The lightness gives it a sporty feel, which suits the design. 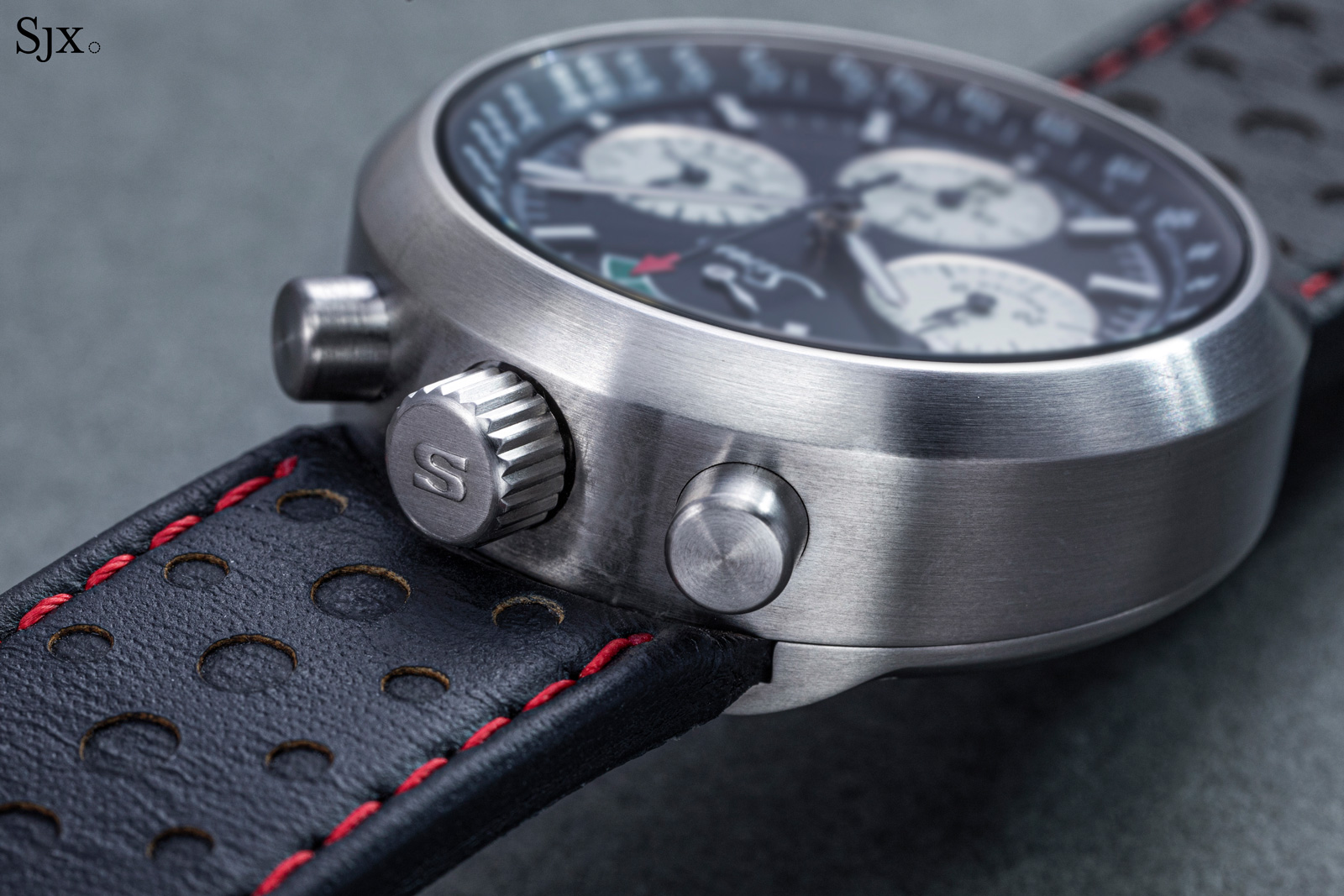 The case is a perfect circle that does away with lugs. The result is a far larger and more prominent round form, bringing to mind a pocket watch attached to a strap. The absence of lugs also explains why the large case wears smaller than it measures, as the effective top to bottom length is effectively shortened compared to a similarly-sized watch with lugs. 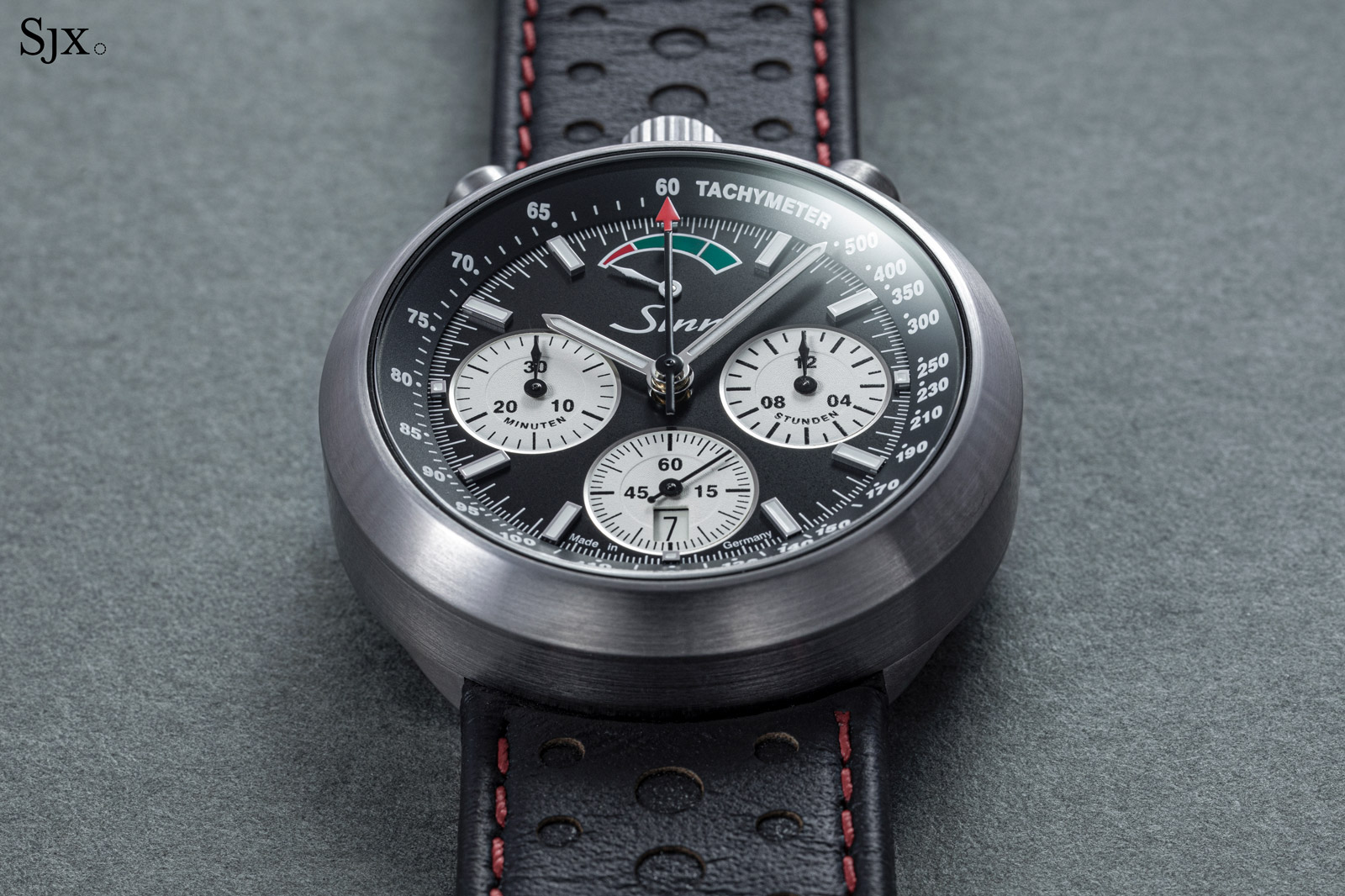 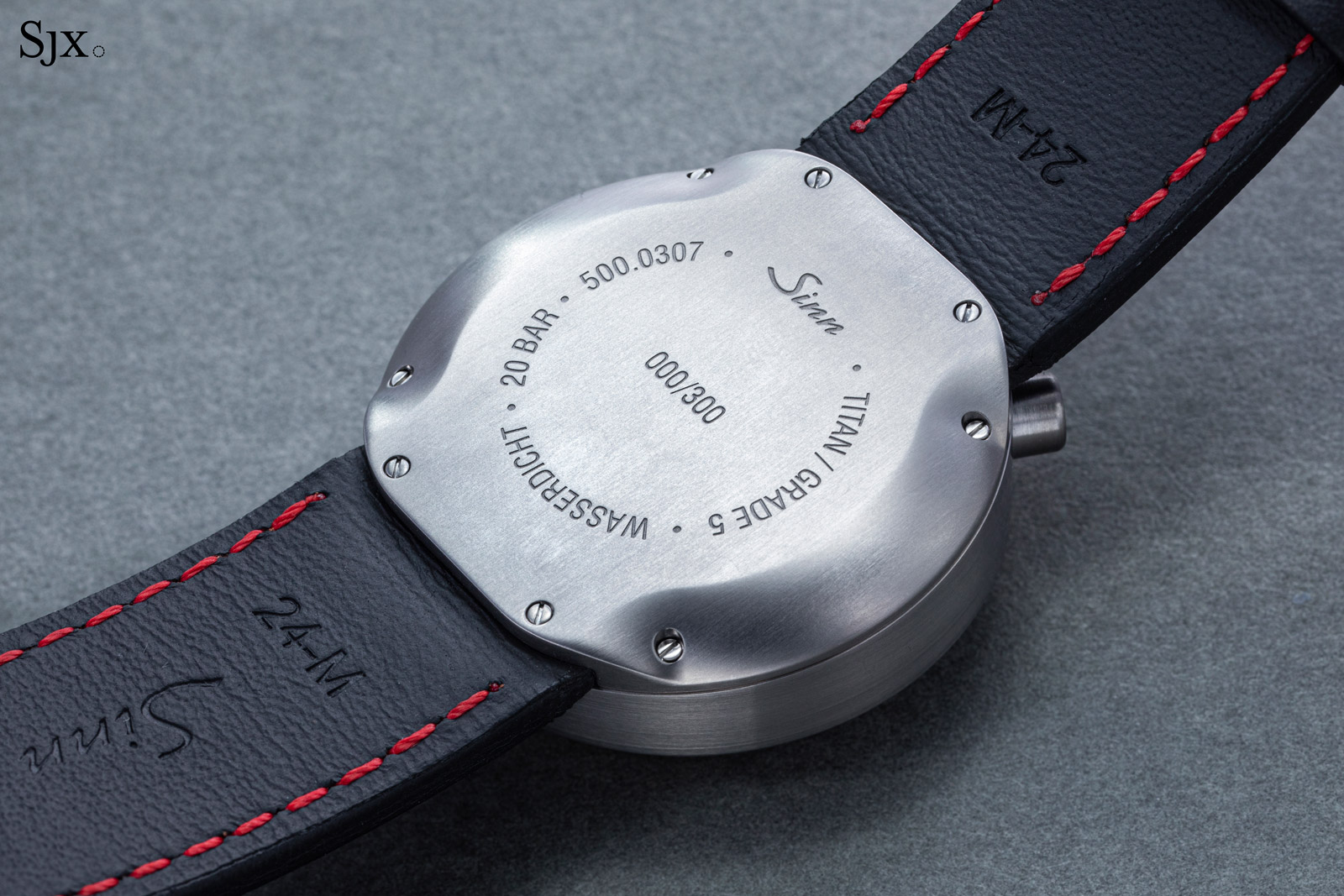 But the downside of the lug-less design is the integration of the strap into the case, with the strap secured under the case back with two screws. Swapping straps becomes a chore: first undoing the screws and then lifting the case back. And only straps made specifically for the case attachment will fit.

On a positive note, the round case is intriguing in its profile. It is sloped downwards from 12 to six o’clock, which tilts the dial towards the wearer in order to enhance readability with hands on the wheel. 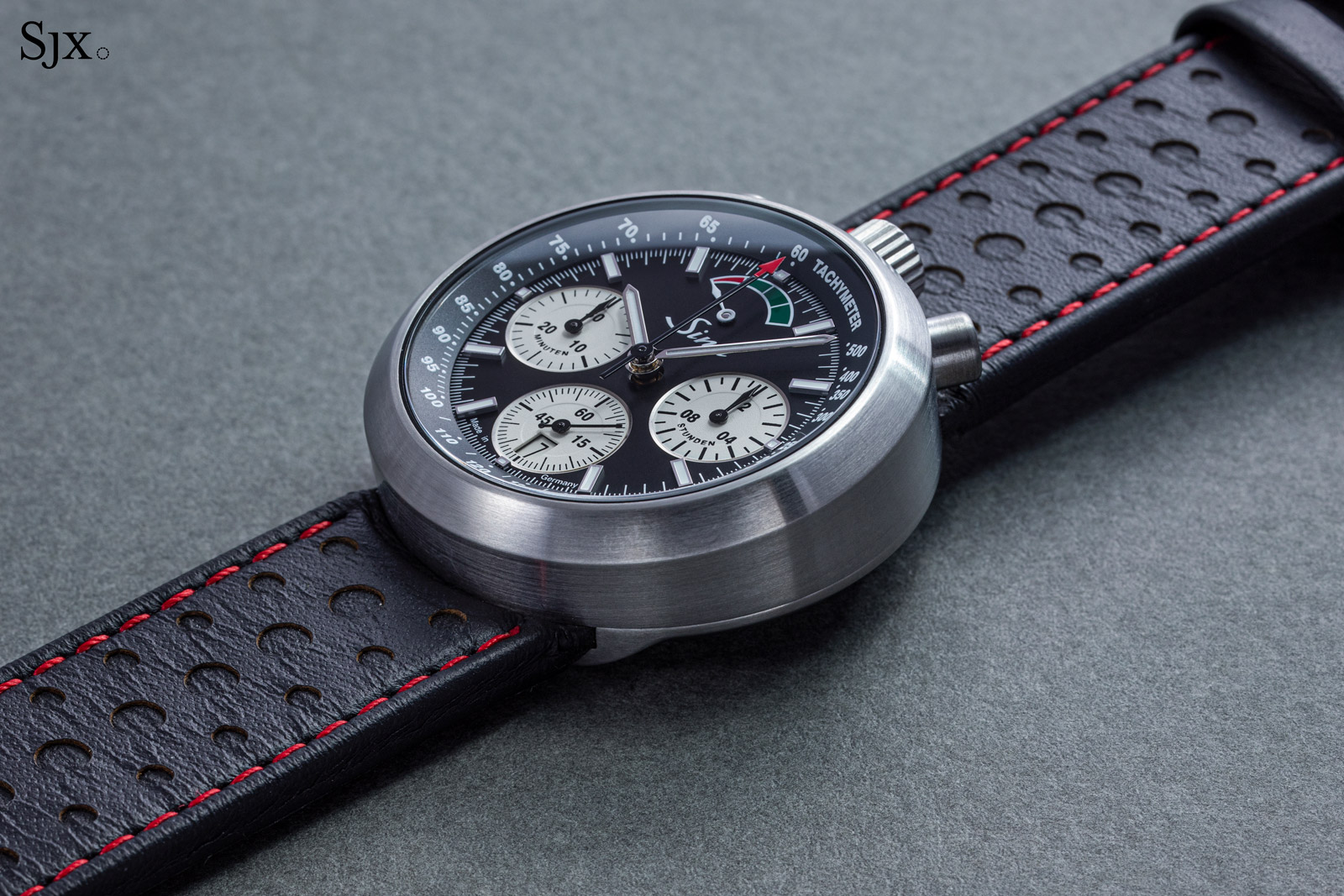 Under the case back sits a Valjoux 7750, the famous movement that’s reliable, easy to service, and cost effective. It gets the job done well, although a more elaborate movement should have been used given the price of the R500. The Sinn EZM 1.1, for instance, was powered by the SZ01, a 7750 modified by Sinn to have a central elapsed minute hand. That retailed for about 10% more than the R500, albeit back in 2018.

Like the rest of the watch, the dial is simple but effective. The many elements of the dial are well organised, with minimal clutter despite the numerous indicators of three sub-dials, a power reserve, and a tachymeter. Additionally, the dial appears well done when examined up close. 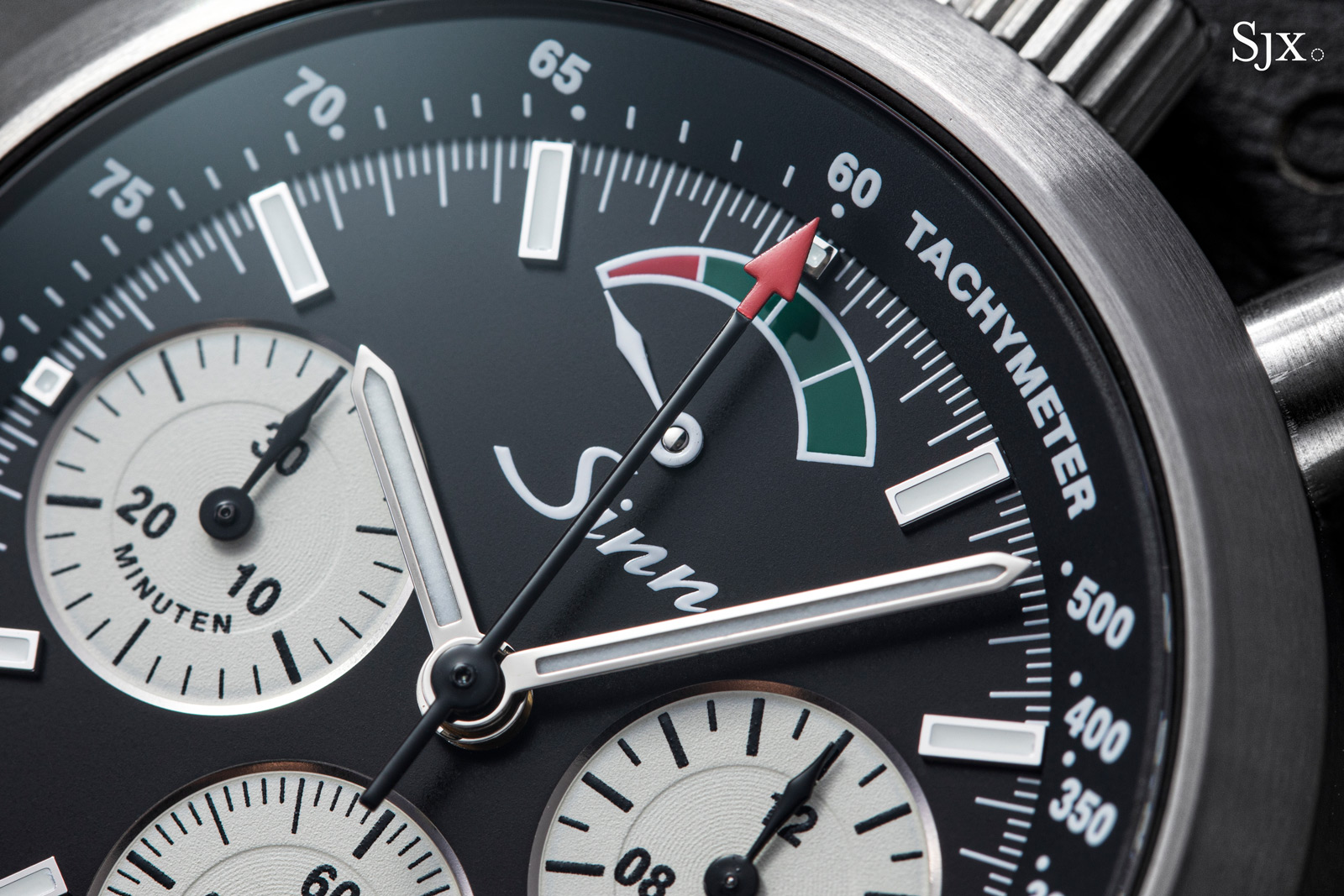 The dial layout is symmetrical, concise, and executed in colours that are high contrast but almost monotonous, though the colours of the power reserve scale liven it up.  The registers are a stark white against a matte black dial, a combination that brings to mind another German chronograph of in wholly different vein, the Lange Datograph, which is similarly functional but on a whole different plane in mechanics and materials.

A telling detail that speaks to the attention to detail in its design is the hands. As is traditional in chronograph design, the elapsed-time hands are all lance shaped, while the hands for the time – hours, minutes, and seconds – are baton. This visual distinction aids legibly only slightly, but it is a pleasing detail. Both the hour and minute registers are labelled in German, something that would ordinarily be unnecessary. But the similarity of both registers means the labels are defensible and useful, especially since they are done in small font. While the main function of the power reserve indicator at 12 is to remind the wearer if the watch is running low on juice, the power reserve scale also serves to balance the dial vertically and give it a bit of colour 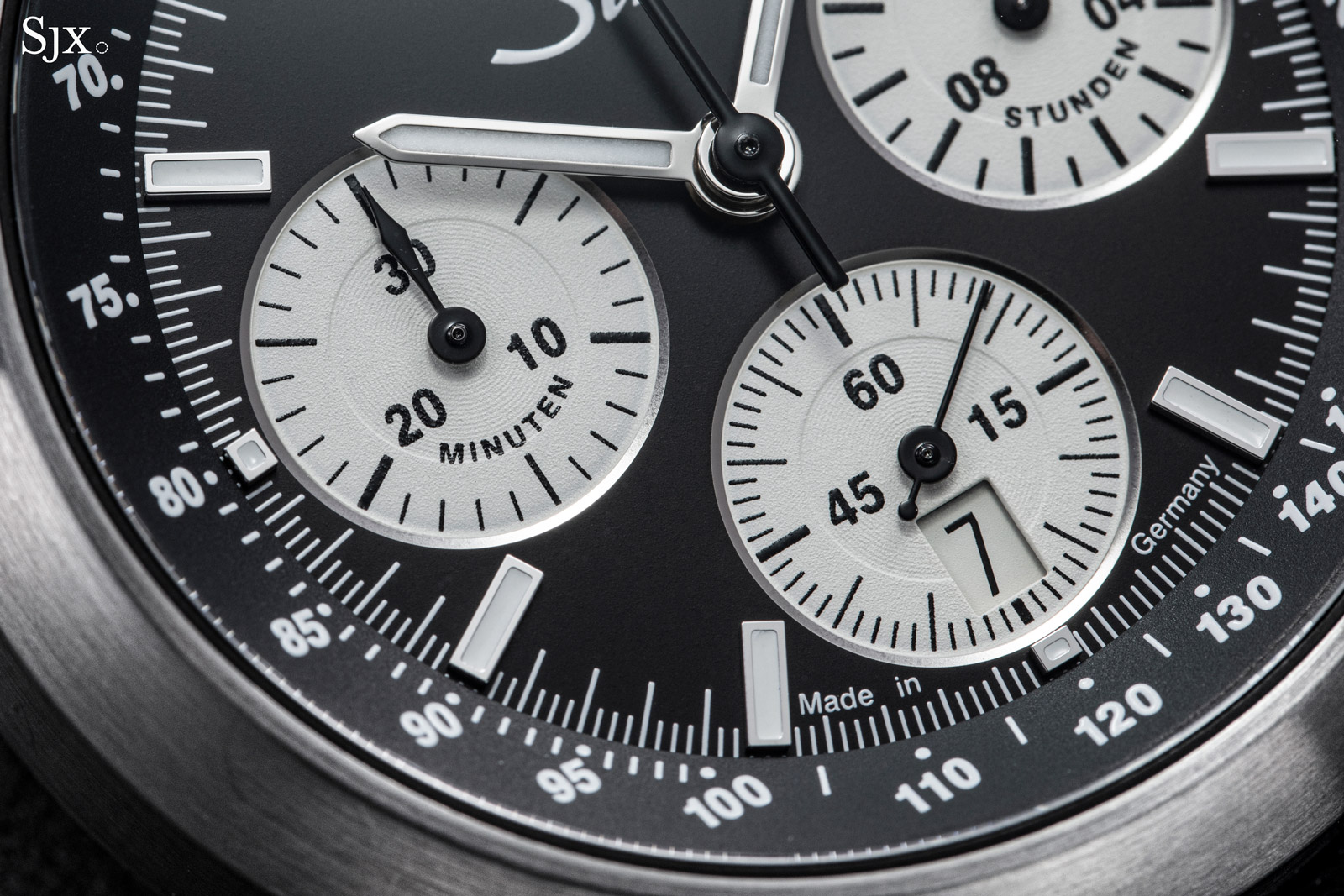 Also smartly designed is the date, which is less important on an instrument watch but occasionally useful, so it’s tucked into the running seconds register, making it less obvious while preserving the symmetry of the dial

The quality of the dial is largely excellent. Most of the print is crisp, with defined edges, while the paint on the seconds hand is cleanly applied. Notably, the red and green segments of the power reserve indicator are neatly printed. 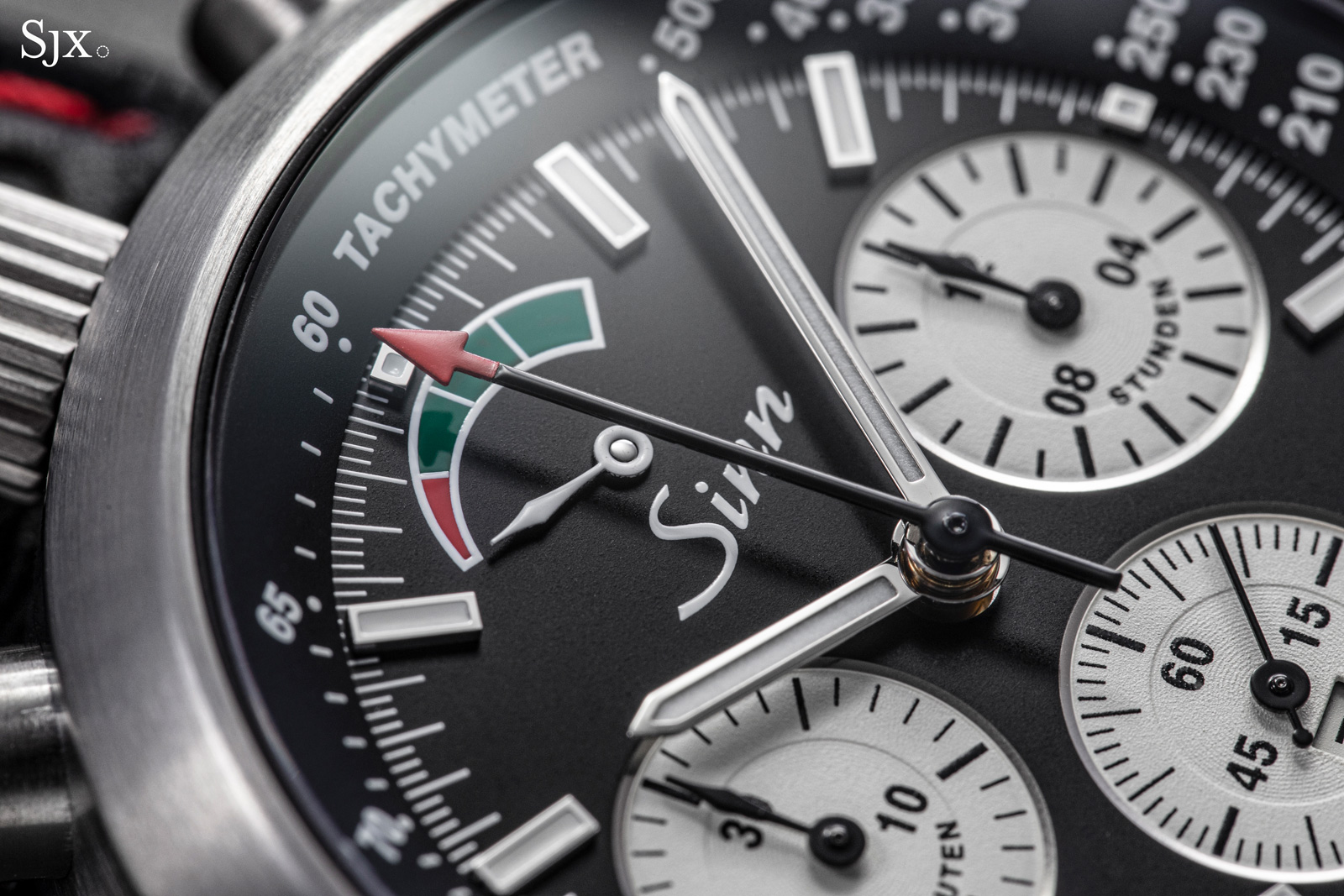 The printing on the sub-dials appears a bit less tidy, likely due to the granular or concentric surfaces

The R500 is well made and smartly designed, resulting in a durable and functional chronograph that very much reflects Sinn’s traditional strengths. Though it is pricier than the average Sinn, the “bullhead” case distinguishes the R500 from its peers, giving it an edge in terms of aesthetics.