H. Moser & Cie. launched the Streamliner Flyback Chronograph almost exactly a year ago with a launch edition of a 100 pieces that sold out quickly. I liked the watch when I first saw it in late 2019. Both its design and execution were done well, and the movement is special. Unlike many of its peers, the Streamliner is an original in a segment dominated by derivative watches. So when I was offered the chance to borrow the prototype for a few days – off the wrist of Moser chief executive Edouard Meylan, who had been wearing it skiing – it was an easy yes.

Reminiscent of the 1970s and 1980s sports watches – but not the obvious ones like the Nautilus and Royal Oak – the Streamliner is one of the few integrated-bracelet sports watches that isn’t derivative, which is a feat in itself.

The “Funky Blue” version has exactly the same design and movement, but with a new dial in a graduated, metallic blue that’s even more striking. I do, however, miss the vertically-brushed finish on the dial of the launch edition, which was uncommon amongst Moser watches. 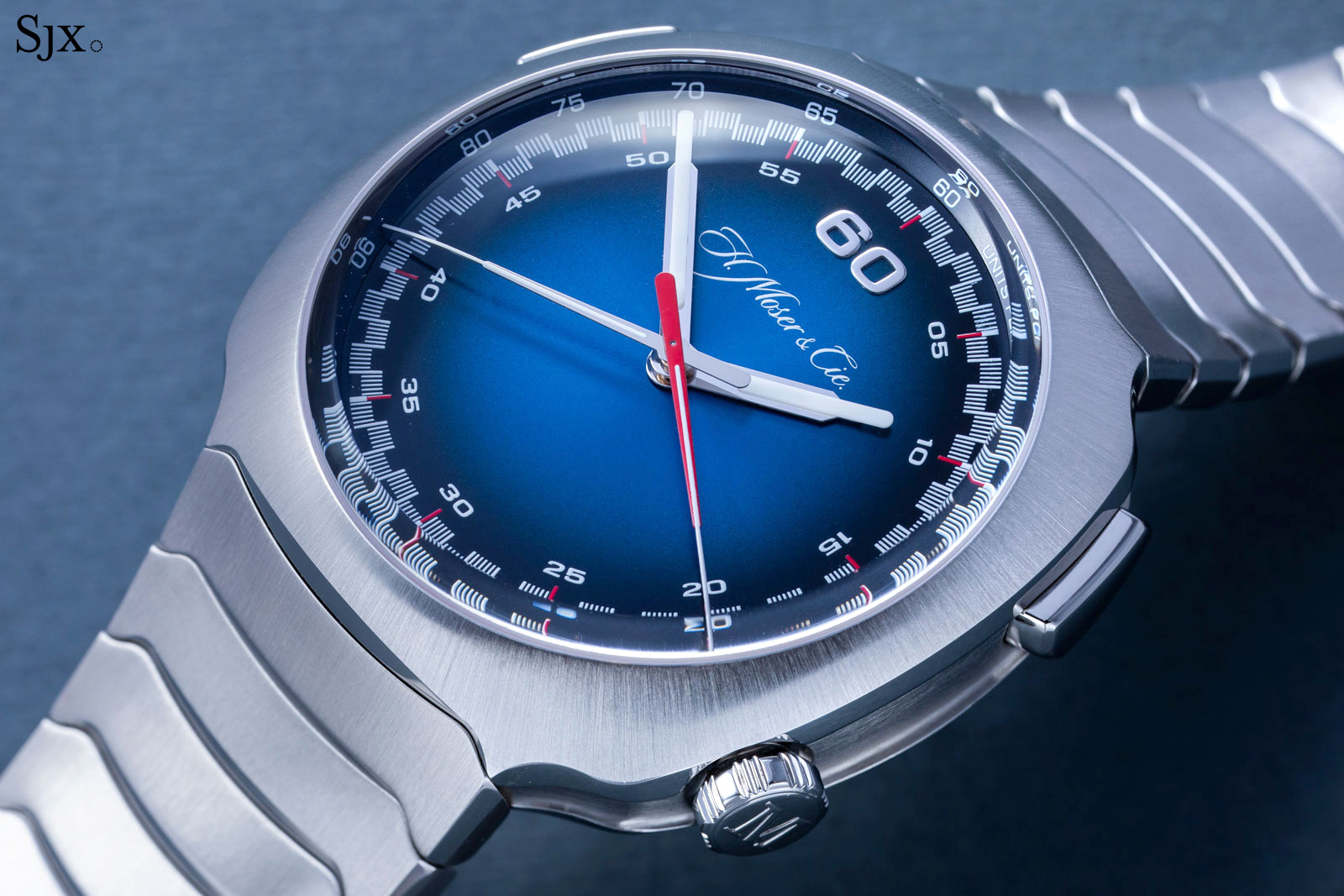 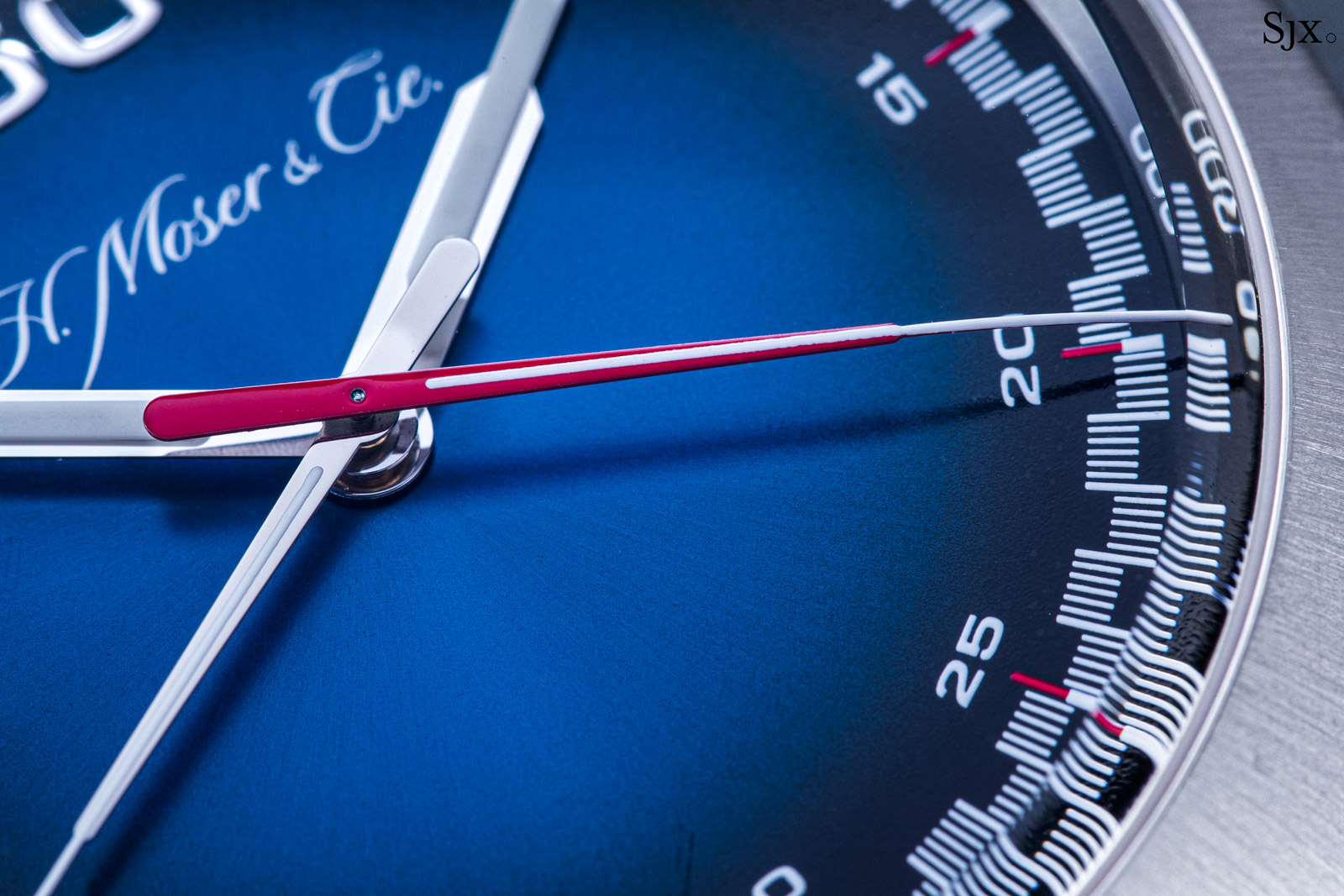 The subtle, radially-brushed finish of the Funky Blue dial

Aesthetic aside, a key part of its appeal lies in the HMC 902 movement, a calibre developed by Geneva specialist Agenhor. Not only is the construction clever, it is also good looking, despite its modern aesthetics. Traditionally-styled chronograph movements like the L951.1 of the Datograph are usually the most attractive, but the HMC 902 is appealing in its modern, dense complexity. Priced at a bit under US$44,000, the Streamliner is more expensive than most other luxury-sports chronographs, including crowd favourites like the Royal Oak and Overseas, as well as the lesser-known candidate like the Chopard Alpine Eagle XL. But it is more interesting, both aesthetically and mechanically.

The Streamliner combines an fresh design with an impressive movement, making it a surprisingly compelling buy. The new version is, however, 10% more expensive than the launch model, a forgivable increase given its success. 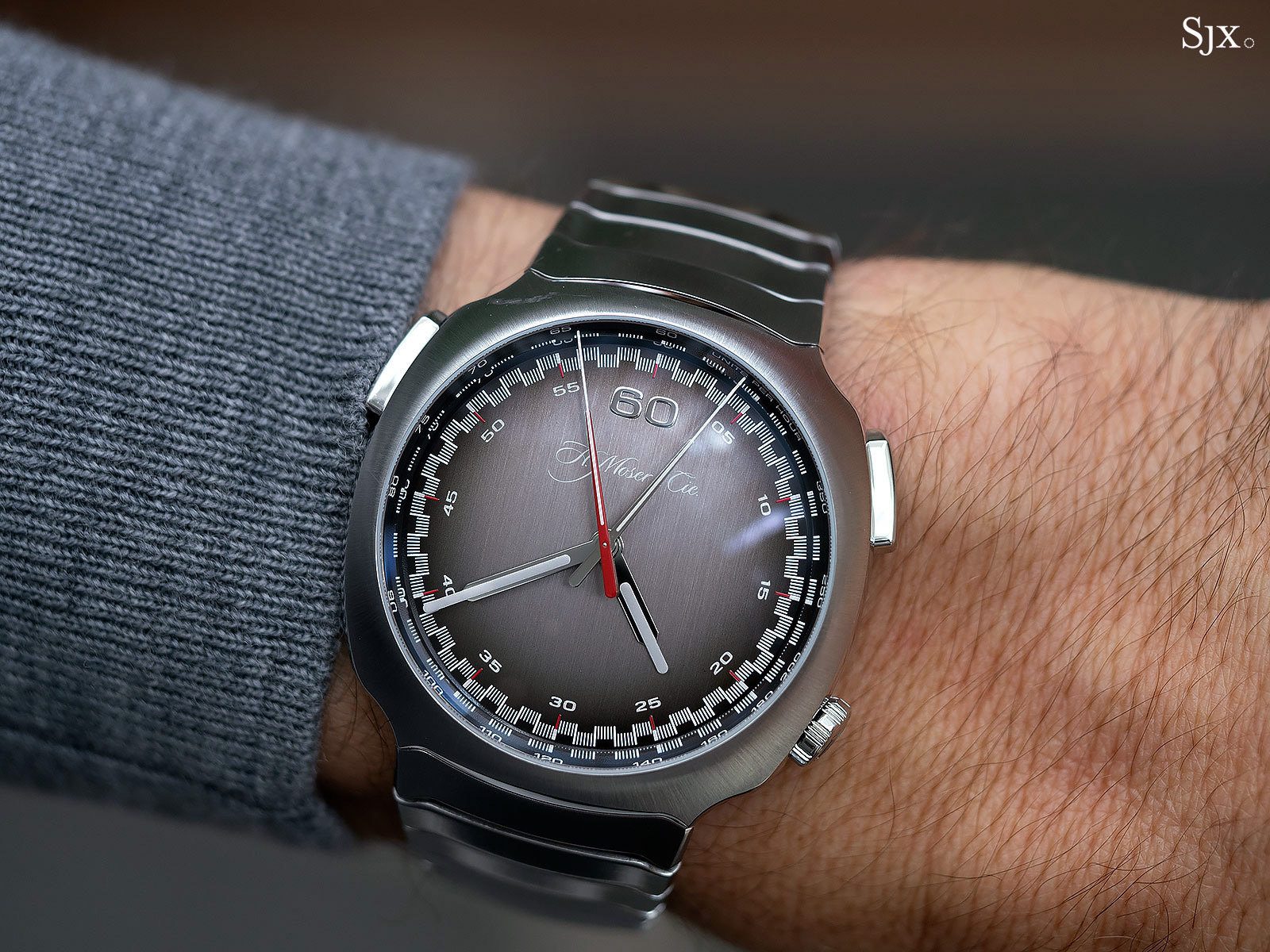 The launch edition of the Streamliner chronograph

The design of the Streamliner is unusual in combining elements that bring to mind a diversity of watches, including cushion-shaped chronographs of the 1970s like the Omega Flightmaster, the minimalist IWC Porsche Design watches as well as the Ebel Sport Classic of the 1980s. Yet it all works well together.

The lines of the case flow into the bracelet, which has links that echo the lugs. The design means it wears well for a largish watch that’s thick – the case is 42.3 mm wide and 14.2 mm high. The size means it’s a good weight on the wrist; substantial but not ungainly. A titanium case and bracelet would make it much lighter, and even more appealing for those who like their sports watches featherweight. Despite its thickness – the case is thicker than the latest version of the Royal Oak Offshore Chronograph – the Streamliner doesn’t feel quite that large for several reasons. One is the wide, sloping bezel, and another are the case flanks that have their verticality broken up by a recessed middle. The case back is also highly domed, allowing the watch to appear flatter on the wrist. 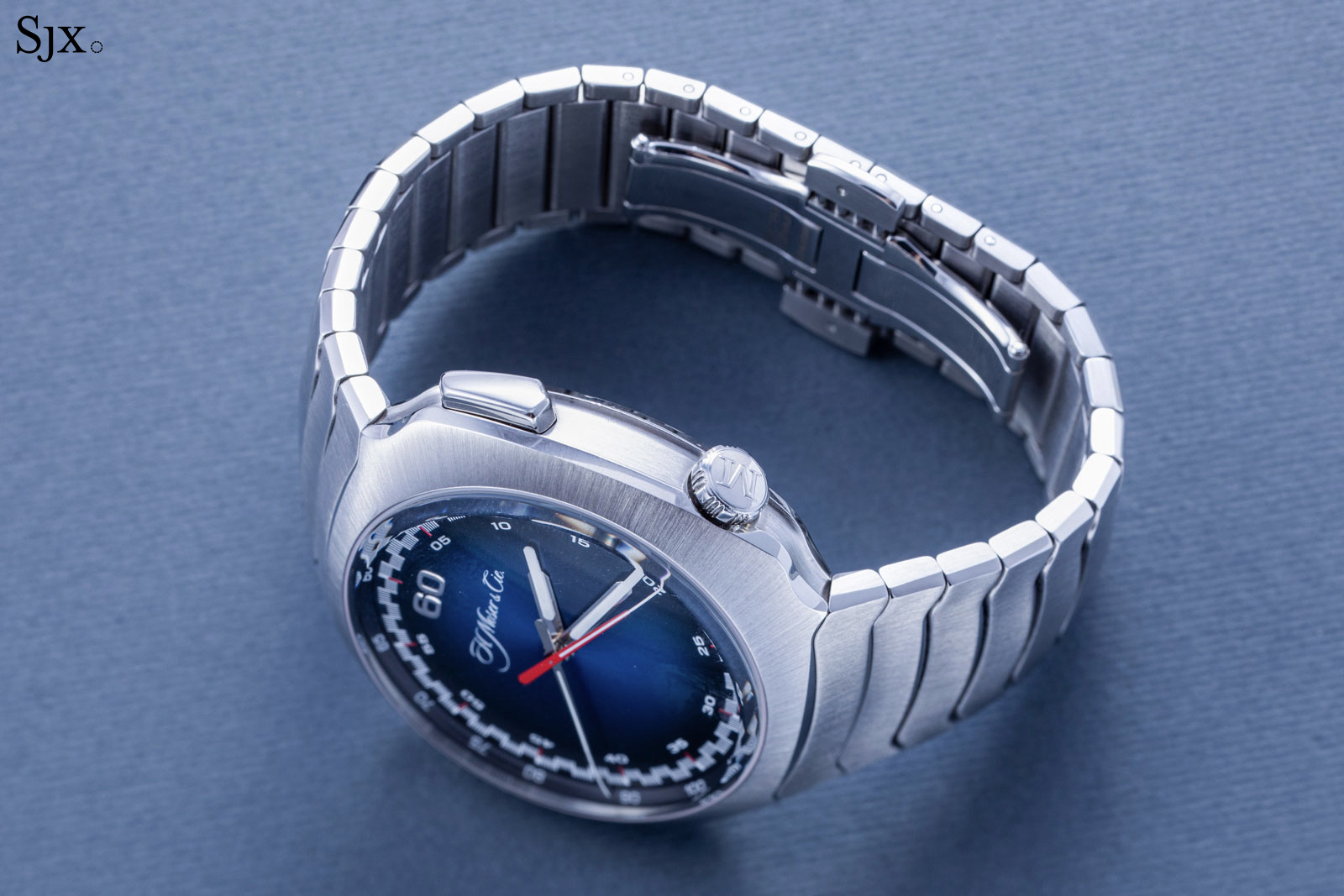 Though sleek, the Streamliner case and bracelet have enough detail to make them interesting while close, while also being finished well.

The case is actually a two-part affair – the middle and bezel are one, with the back secured by four screws – but its styling and finish makes it seem like a layered sandwich. The flanks of the case are recessed, but sandwiched in-between raised, polished lips. The front of the case has a fine, radial brushing that brings to mind cushion-shaped watches of the 1970s with a similar finish, like the Omega Flightmaster for instance. It’s framed by a polished lip that continues the polished bevel of the bracelet, which gives the look a bit of refinement.

All of the surfaces and edges are finished neatly and sharply – a superior quality of finish. It doesn’t quite have have the lustre or razor-sharp edges of a Royal Oak – the best in the luxury-sports segment – but the finish is excellent. Because there’s no bezel, the sapphire crystal sits above the case, which gives it an appealing appearance but might leave it liable to chips on the edges, especially since it’s quite tall A key part of its visual appeal is the finish of the bracelet, which is brushed on top, but with each link separated by a polished bevel. The polished border between each link catches the light nicely as the bracelet articulates, giving the watch a gentle shine that is a necessary feature in luxury-sports watches.

The bracelet links are fairly small, allowing for a good fit for most wrists, but not all. Consequently, the only significant weakness of the bracelet is the lack of a micro-adjustment mechanism. That could be solved with a half or one-half link, neither of which is available.

When asked about this, Mr Meylan responded that a micro-adjustment system is in the works. Specifically, the brand is working on a mechanism that is both functional and visually seamless with the bracelet, which is definitely something worth looking forward to. 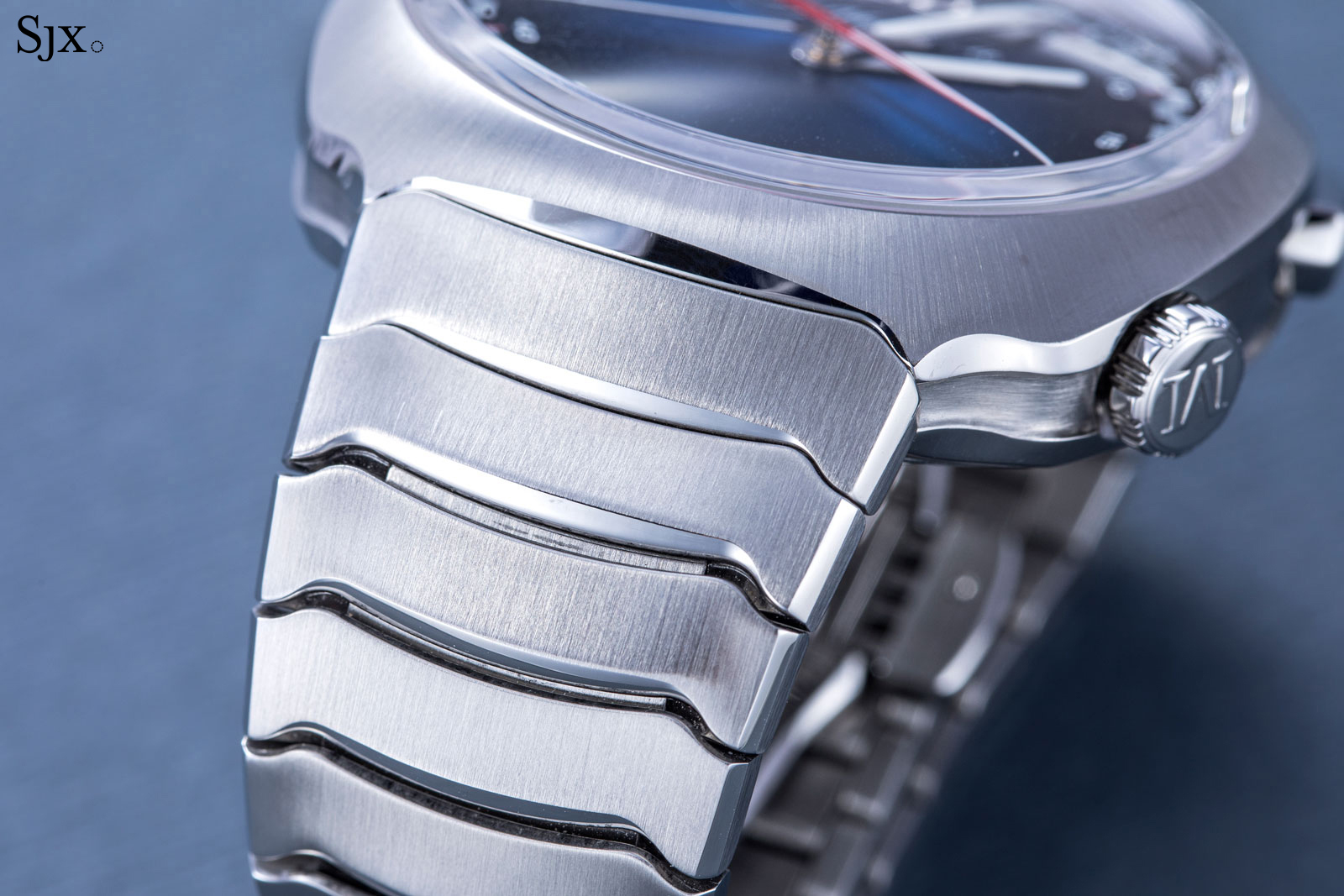 The bracelet links are reminiscent of a metallic crustacean The clasp is hidden, with only a discreet Moser logo to mark its place

Blue is the flavour of the day when it comes to luxury-sports watches so the dial colour here isn’t a revelation. Fortunately, the dial manages to set itself apart from the pack by avoiding guilloche, while relying on a stopwatch-centric “racing” scale for the minutes and seconds.

Typical of Moser’s fumé dials, this has a radially-brushed finish that gives the dial a gentle texture. The graduated colour that darkens towards the edges is a design accent, but it happens to work especially well with a central chronograph like this, as the minute scale and tachymeter have greater contrast against the black surface. The use of an alternating, “racing” style minute track helps distinguish the segments, as do the red accents for each five minutes marker. That said, the minute scale takes a while to read because it’s graduated for 1/6 of a second – because the movement beats at 3 Hz – resulting in fine hashmarks. Crucial to the appeal of the watch is the HMC 902 movement within. Derived from the AgenGraphe produced by Geneva movement specialist Agenhor, the movement is clever and unusual.

[Author’s note: This specific watch is a prototype worn, so the movement shows imperfections like scratches and lint that are naturally absent in a production example.]

Made up of a dense network of levers and springs, the chronograph mechanism is an impressive sight through the display back. The aesthetic is clearly modern with many of the components having sharp, aggressive outlines that suit the style and nature of the watch. Agenhor often incorporates quirky or whimsical elements in its movement design – in the AgenGraphe it’s a bridge that takes the form of Batman. The ingenuity of the movement is precisely why the view from the back reveals the chronograph mechanism in all its detail – even though the watch is automatic.

Its genius lies in the fact that the base movement – namely the regulating organ, gear train, and mainspring – is laid out like a donut. The hole in the centre accommodates a portion of the chronograph, as well as the automatic winding mechanism, with the rotor being hidden behind the dial. Besides having reimagined the construction of the movement, Agenhor also developed several innovations specific to the chronograph mechanism.

The chronograph features both a column wheel and horizontal clutch, as with most high-end chronograph movements, but with an unconventional clutch with smooth-edge wheels coated in diamond-nickel composite, the AgenClutch.

The lack of teeth allows the clutch to engage precisely and instantaneously when the chronograph is started, since the wheels are driven by contact friction, doing away with the need for teeth to mesh. At the same time, the pair of smooth clutch wheels are each co-axial with conventional, toothed “security” gears that ensure the wheels are properly aligned. The clutch bridge, with the column wheel partially visible (at extreme right) The clutch bridge from another perspective

The second innovative element of the chronograph is its elapsed time recorder, the AgenGraphe Heart. Being a chronograph, the mechanisms for recording hours, minutes, and seconds are stacked, but discrete. Each counter has its own coiled spring that functions as a tensioner to ensure a crisp jump of the hand, and the minute and second counters each have a snail cam and reset lever. The heart, revealing the tiny tension springs and snail cams for each part of the chronograph. Diagram – Agenhor The Streamliner chronograph is a unique thought executed well. Aesthetically it is attractive, and the quality of the case and bracelet is excellent. The movement is even better, being innovative and also good looking. In short, the Streamliner chronograph demonstrates that a luxury-sports watch with an integrated bracelet can be excellent yet different from the rest of a crowded field.

Worth a mention is the other notable chronograph to use the same AgenGraphe movement – the Singer Reimagined Track 1.

Like the Streamliner, the Track 1 has a retro design inspired by the 1970s, but derived from watches of a different stripe. Its cushion-shaped case takes inspiration from the auto-racing chronographs of the era made by the likes of Heuer and Breitling. The Track 1 (left), and Streamliner Despite having a near-identical movement – the Streamliner is a flyback chronograph while the Track 1 is not – the two watches look extremely different, illustrating the creative freedom made possible by a central chronograph with no registers. This was brought to you in partnership with Cortina Watch, the official retailer of H. Moser & Cie. in Singapore and Malaysia.