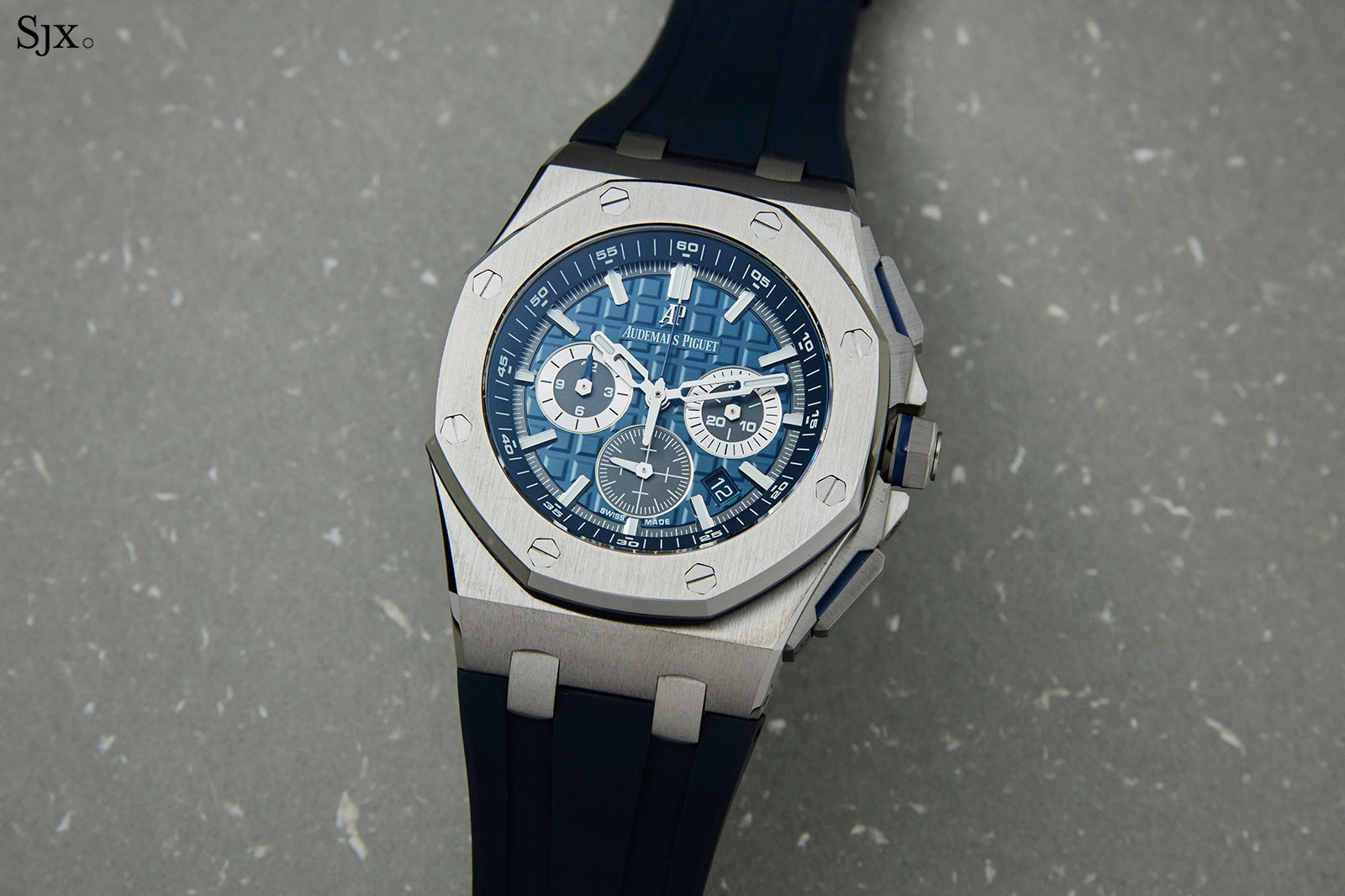 Launched in 1993, the original Royal Oak Offshore Chronograph ref. 25721, designed by Emmanuel Gueit and made famous by Italian Olympic ski champion Alberto Tomba, was 42mm in diameter and an enormous watch at the time. It has since been facelifted several times, most recently in 2017, and joined by several much larger variants.

Unveiled at SIHH 2019 in a relatively low-key manner, the latest Offshore Chronograph ref. 26480TI goes in the other direction. It is still 42mm, but is both thinner, thanks to a Frederic Piguet movement, and lighter because of its titanium case. All in all that makes the new Offshore the most wearable in the line-up.

The case is titanium, but still big enough that it doesn’t feel overly lightweight. It stands just 12.8mm high, compared to 14.4mm for the standard Offshore 42mm.

It’s a substantial difference that changes the proportions of the watch noticeably, giving it a sleeker profile on the wrist. That being said, the case still has a large and flat case back, so it doesn’t sit that well on smaller wrists. 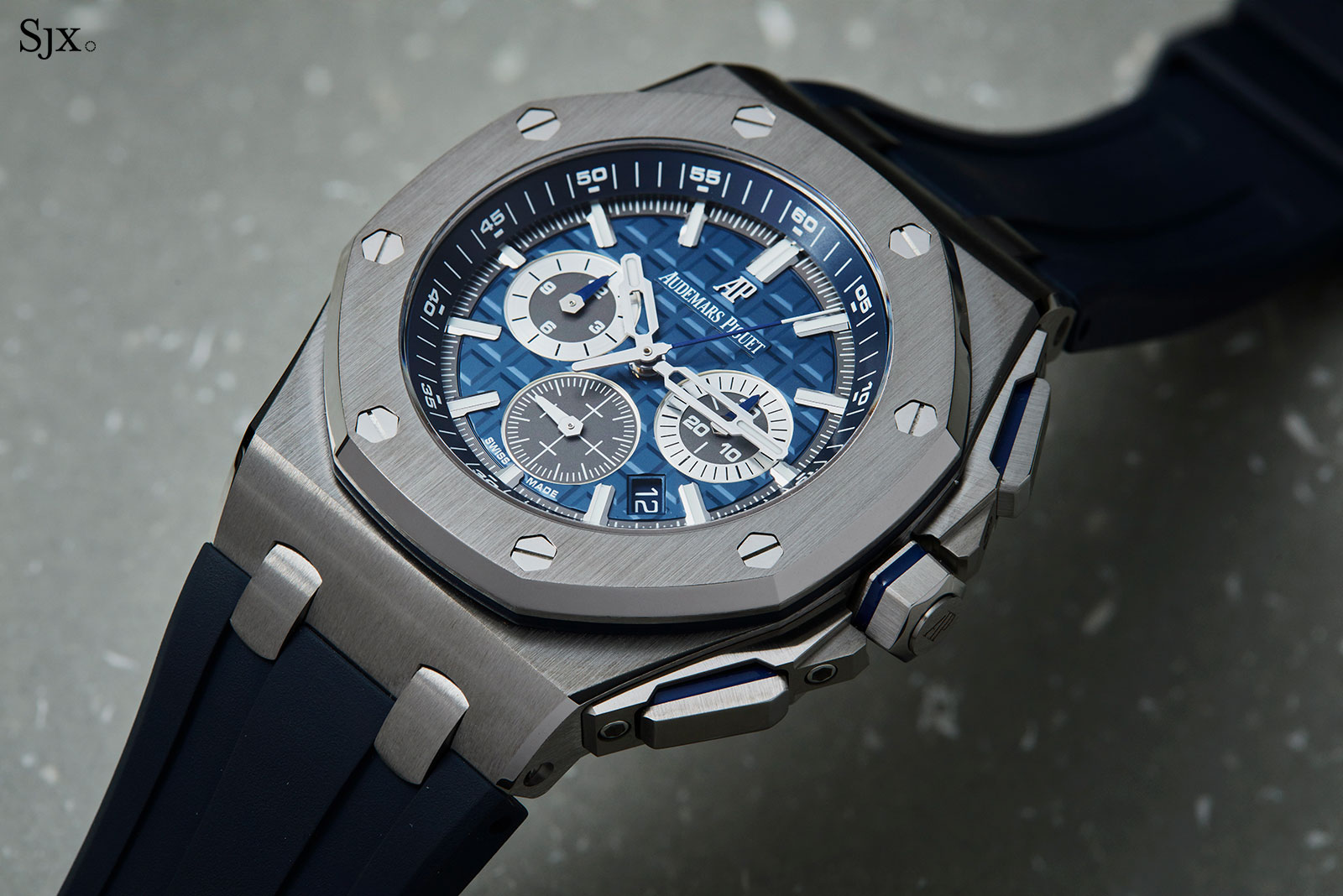 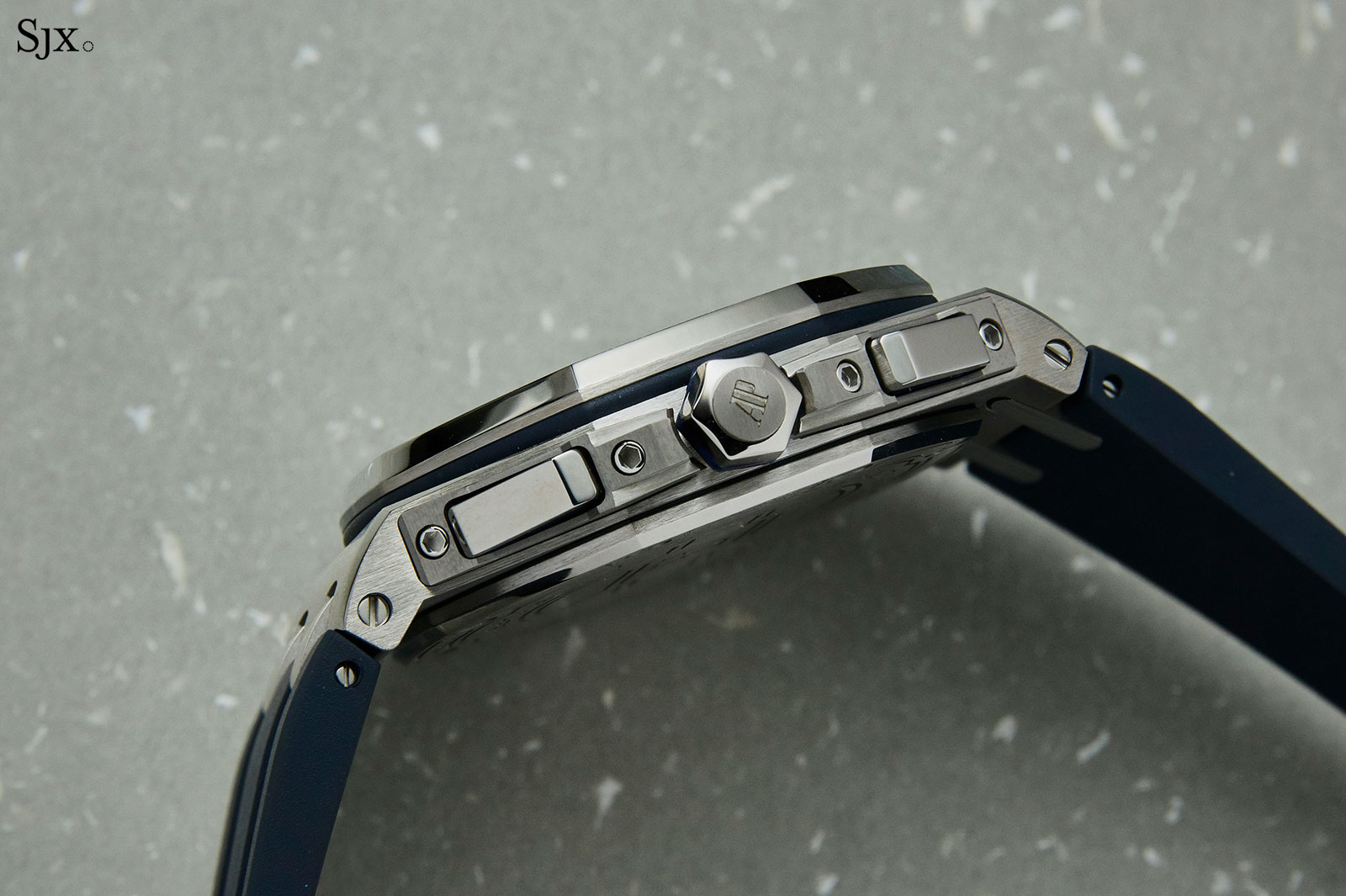 Credit for the thinness goes to the cal. 2385 inside, which is actually a rebranded Frederic Piguet cal. 1185. Although the movement was first introduced in 1988, it remains of the most compact and refined automatic chronograph movements on the market, with a diameter of just 26.2mm and height of 5.4mm. While highly regarded for its sophistication and size, the cal. 1185 does have one downside, a short 40-hour power reserve.

Featuring both a column wheel and vertical clutch, features often found on modern mid- to high-end chronograph movements, the cal. 1185 is an upgrade over the cal. 3126/3840 found in the standard Offshore. That’s a modular movement, the in-house cal. 3126 automatic with an added chronograph mechanism on top that sits jus below the dial. 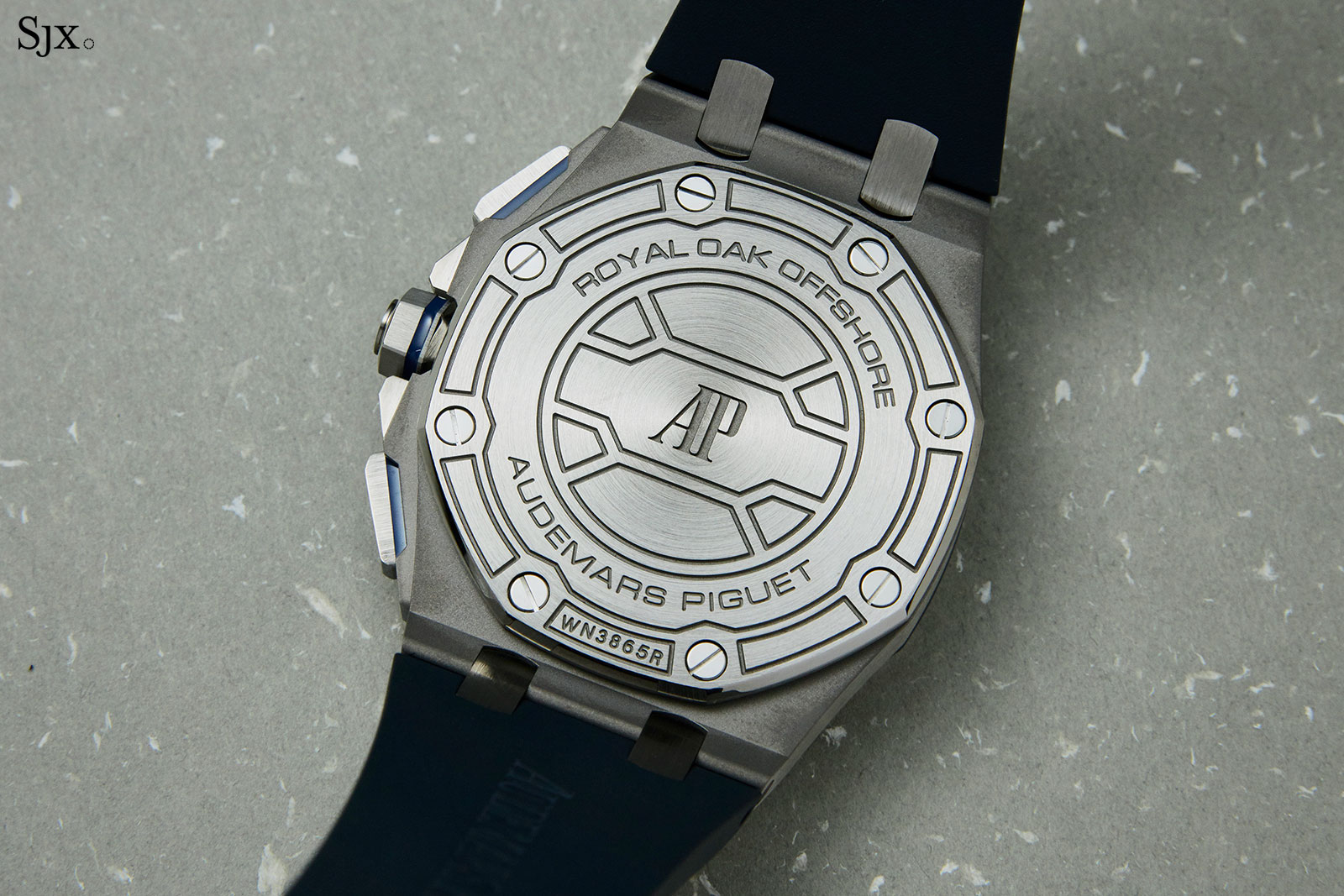 The cal. 1185 was once widely used by high-end brands like Vacheron Constantin, but since Frederic Piguet was integrated into Blancpain its movements are mostly found in watches made by Swatch Group brands like Blancpain and Breguet.

Audemars Piguet still uses the cal. 1185 extensively, but mostly in the Royal Oak Chronograph; the ref. 26480TI is the first Offshore to feature the movement. It’s more than likely that in the longer term the Offshore chronograph will be equipped with the in-house cal. 4401 now found in the Code 11.59, so the ref. 26480TI is not likely to be a long term presence in the catalogue.

Although the movement is small relative to the case, it actually suits the proportions of the watch well, because the Offshore Chronograph dial has always been quite small, with a very wide bezel. Consequently, all of the chronographs counters sit a good distance between the centre and edge of the dial, avoiding the crosseyed clustering often seen on large chronographs powered by small movements.

The case finishing is typical of the Royal Oak, which is to say exceptionally fine. Though it is titanium, which by nature usually has a dull appearance, here it has been given a lustrous finish that resembles steel.

All flat surfaces have a gorgeous brushed finish, while the edges are mirror polished bevels. And the border between the contrasting finishes is razor sharp. 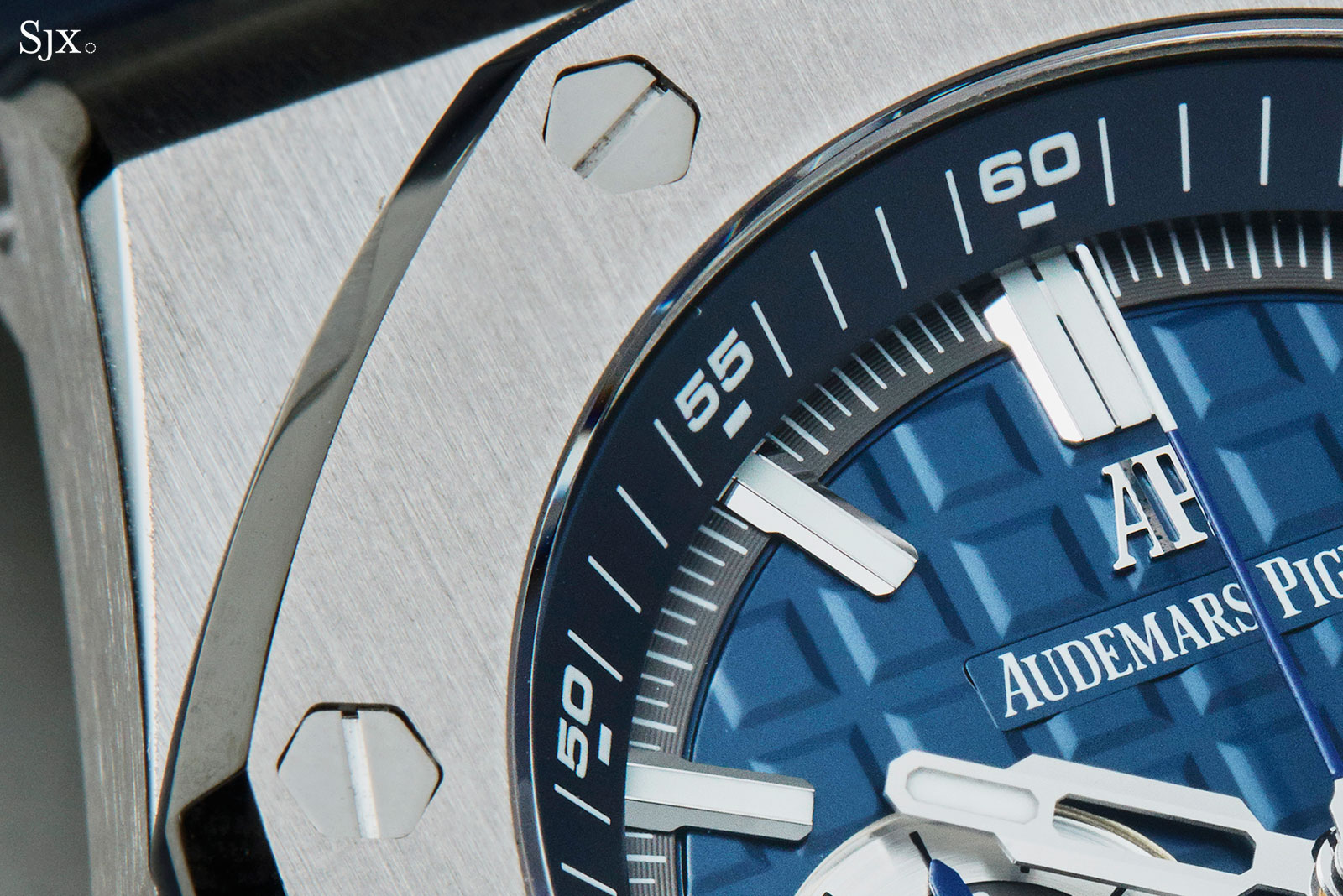 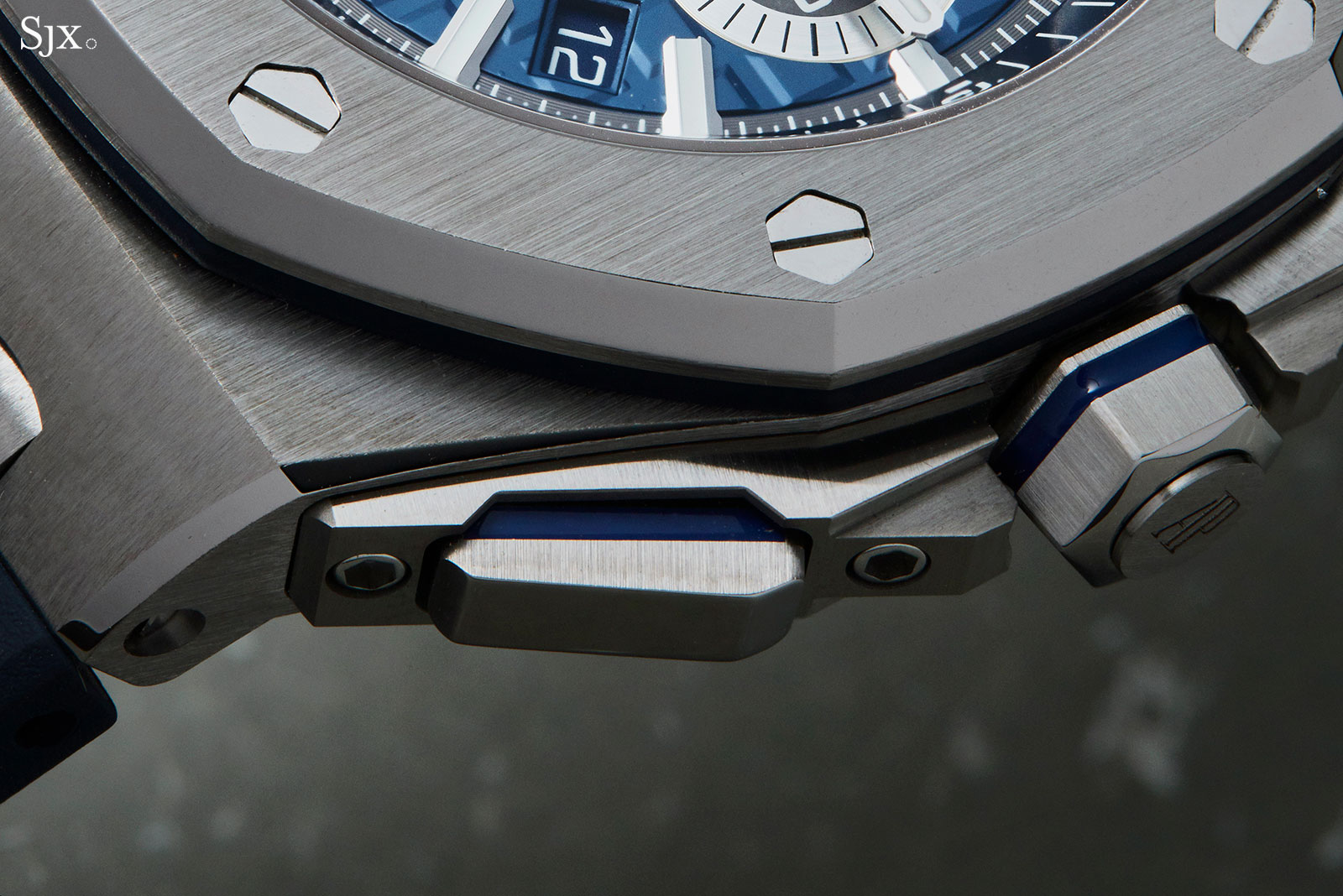 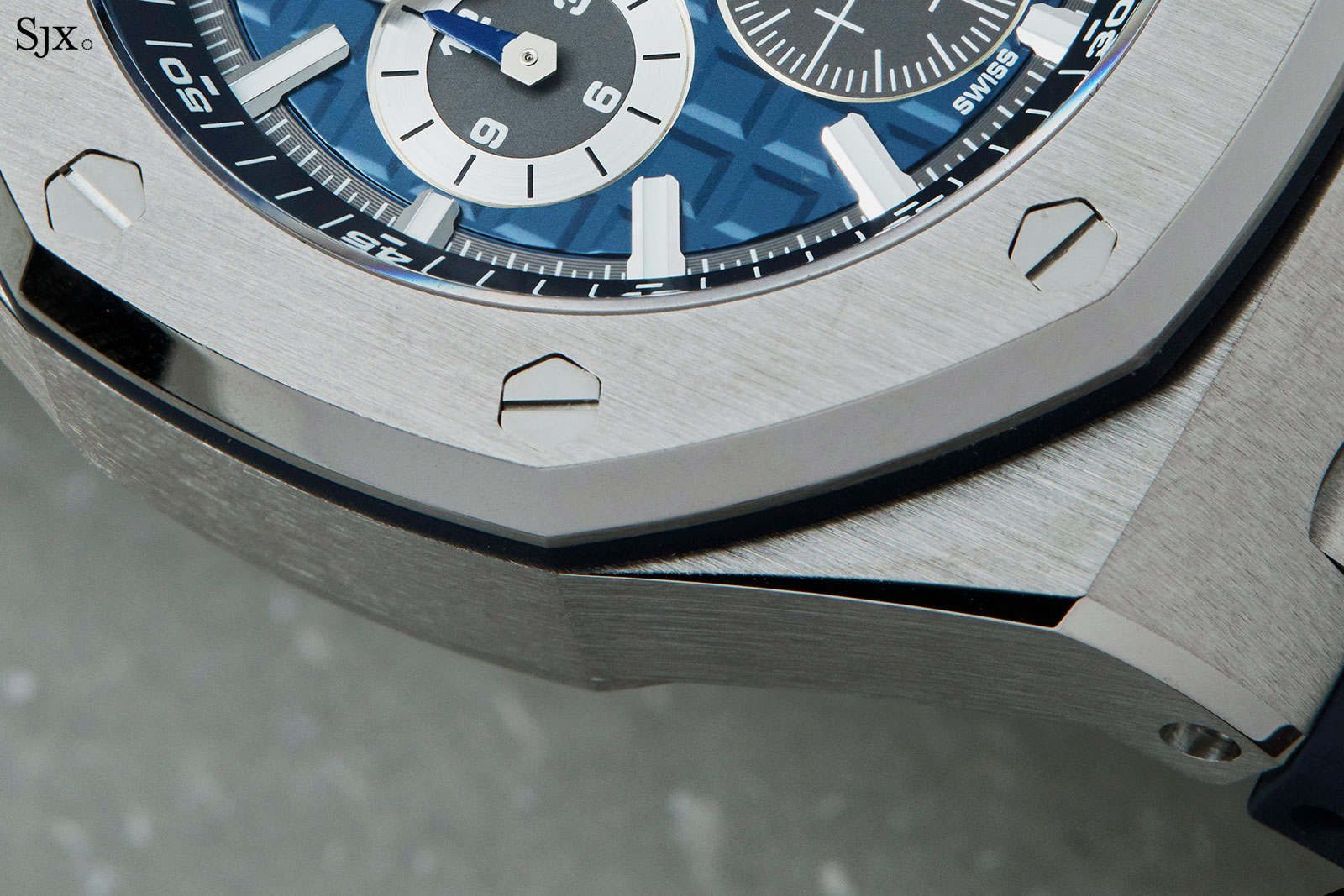 Just like the case, the dial has a high level of fit and finish.

The design is typical of the Royal Oak, with sub-dials are are sensibly colour-coded – grey for the constant seconds, while the chronograph registers are grey with white borders. 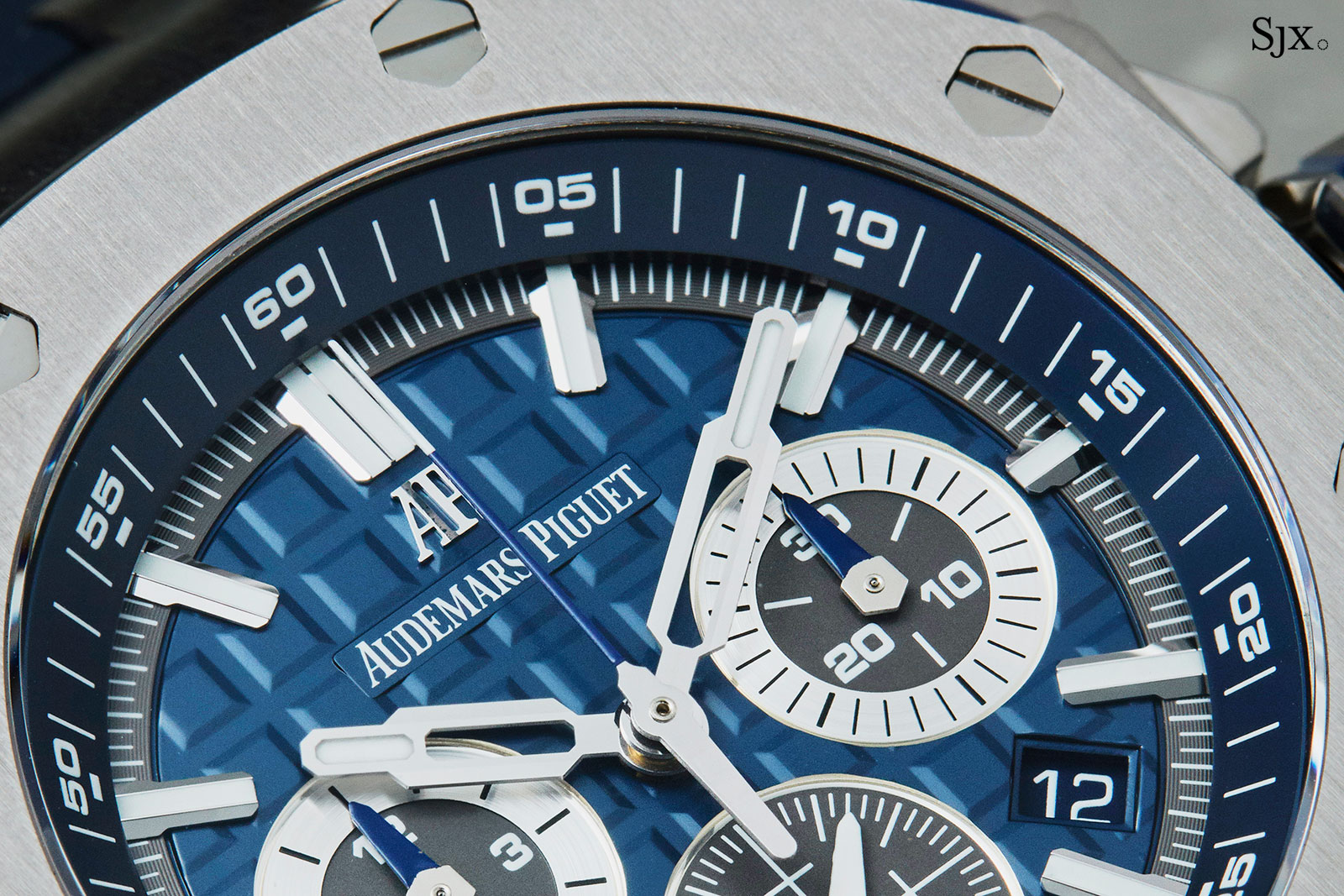 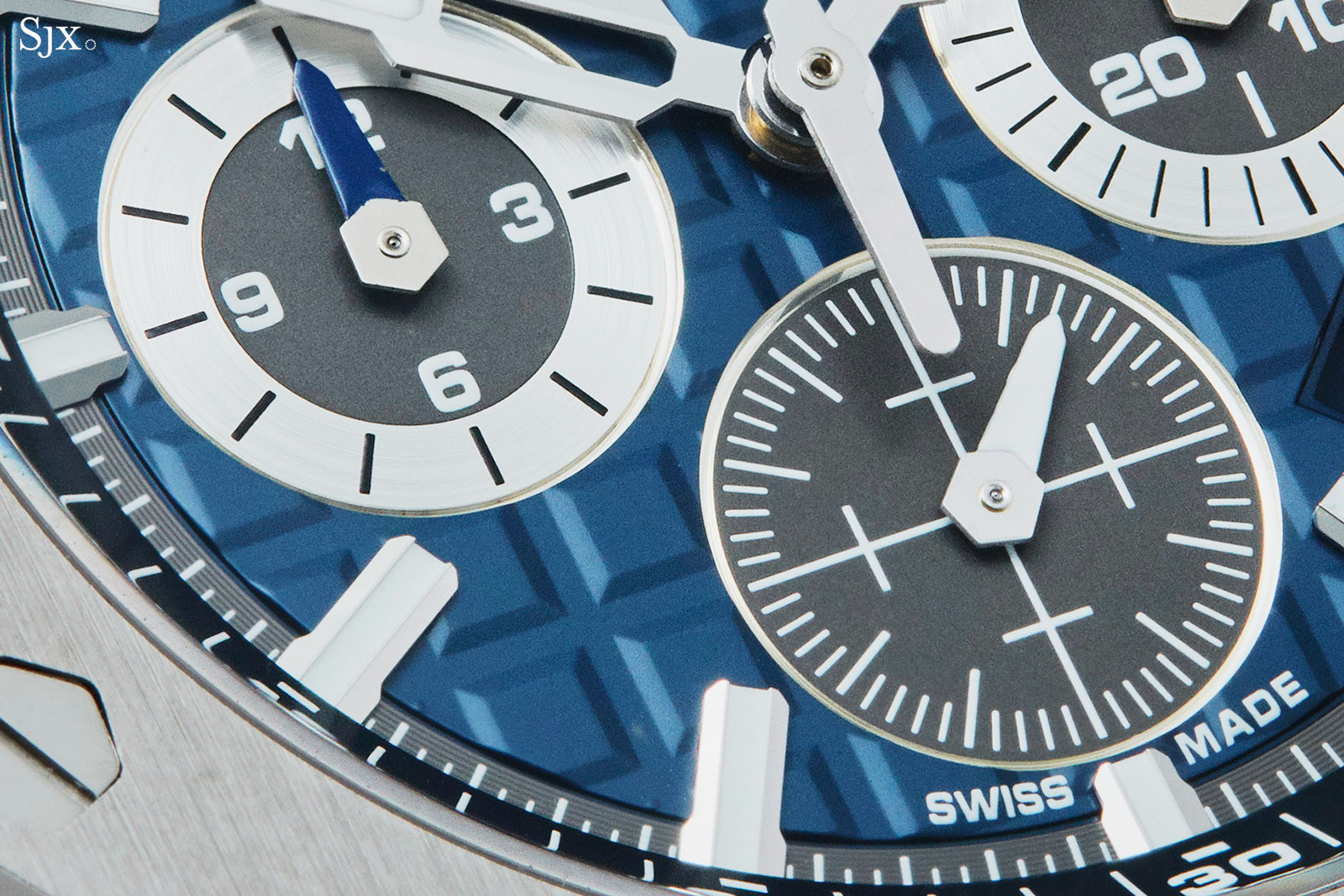 That being said, the styling feels like it’s over-designed, with little embellishments everywhere. The hour and minute hands are elongated and skeletonised versions of the standard Offshore hands, while the hour markers are flared at the base.

And then there’s the crosshair on the constant seconds register, while the case back is engraved with a motif reminiscent of a football.

It’s not unattractive, but it feels unnecessary. 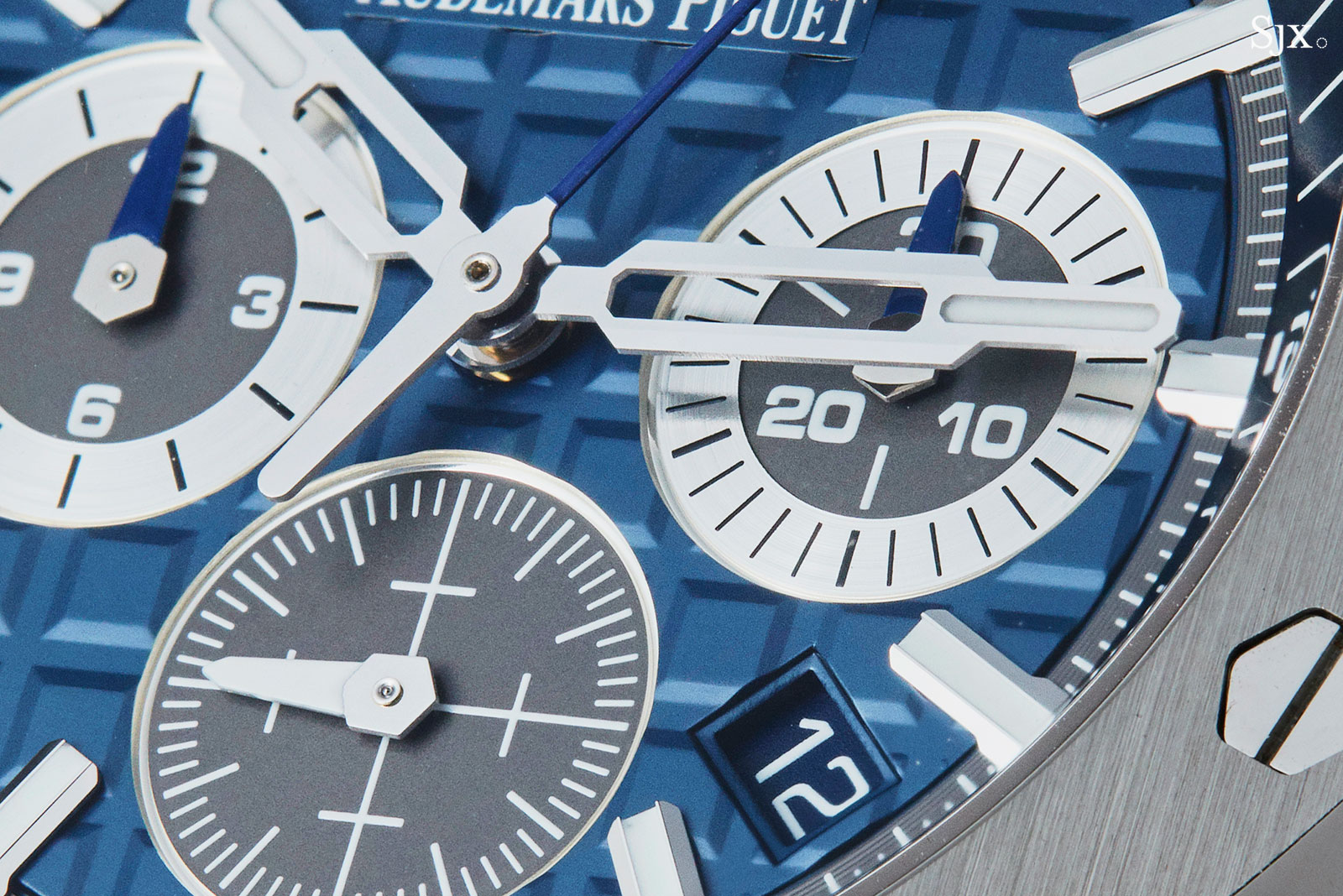 Despite the excessively styled dial, the Offshore Chronograph ref. 26480TI is one of the more attractive watches in the line-up. Its size and weight also give it a good feel on the wrist.

From a broader perspective, the new Offshore an interesting watch; it feels a little bit like a way station between the current Offshore with a modular movement and future Offshores with the new in-house cal. 4401. With that being the case, it’ll probably be relatively uncommon.