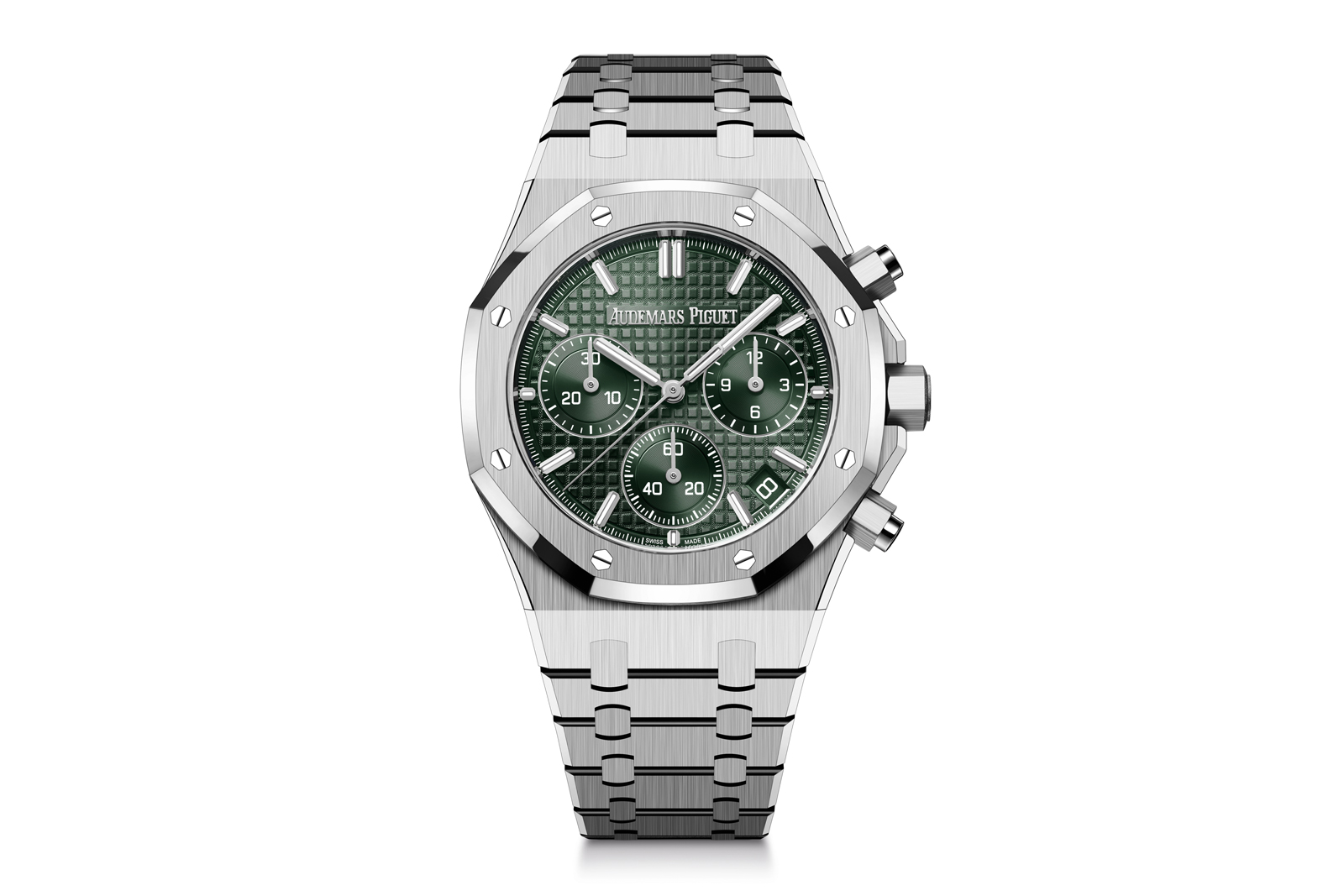 In addition to new time-and-date models – led by the “Jumbo” ref. 16202 – Audemars Piguet revamped a few complicated Royal Oaks for the model’s 50th anniversary. At the top end of the complications line up is the flying tourbillon, while the most affordable is the Royal Oak Selfwinding Chronograph 41 mm ref. 26240.

Like last year’s solid-gold Royal Oak chronograph on a strap, the new ref. 26240 is equipped with the cal. 4401, the brand’s latest-generation chronograph movement that made its debut in the Code 11.59 Chronograph. 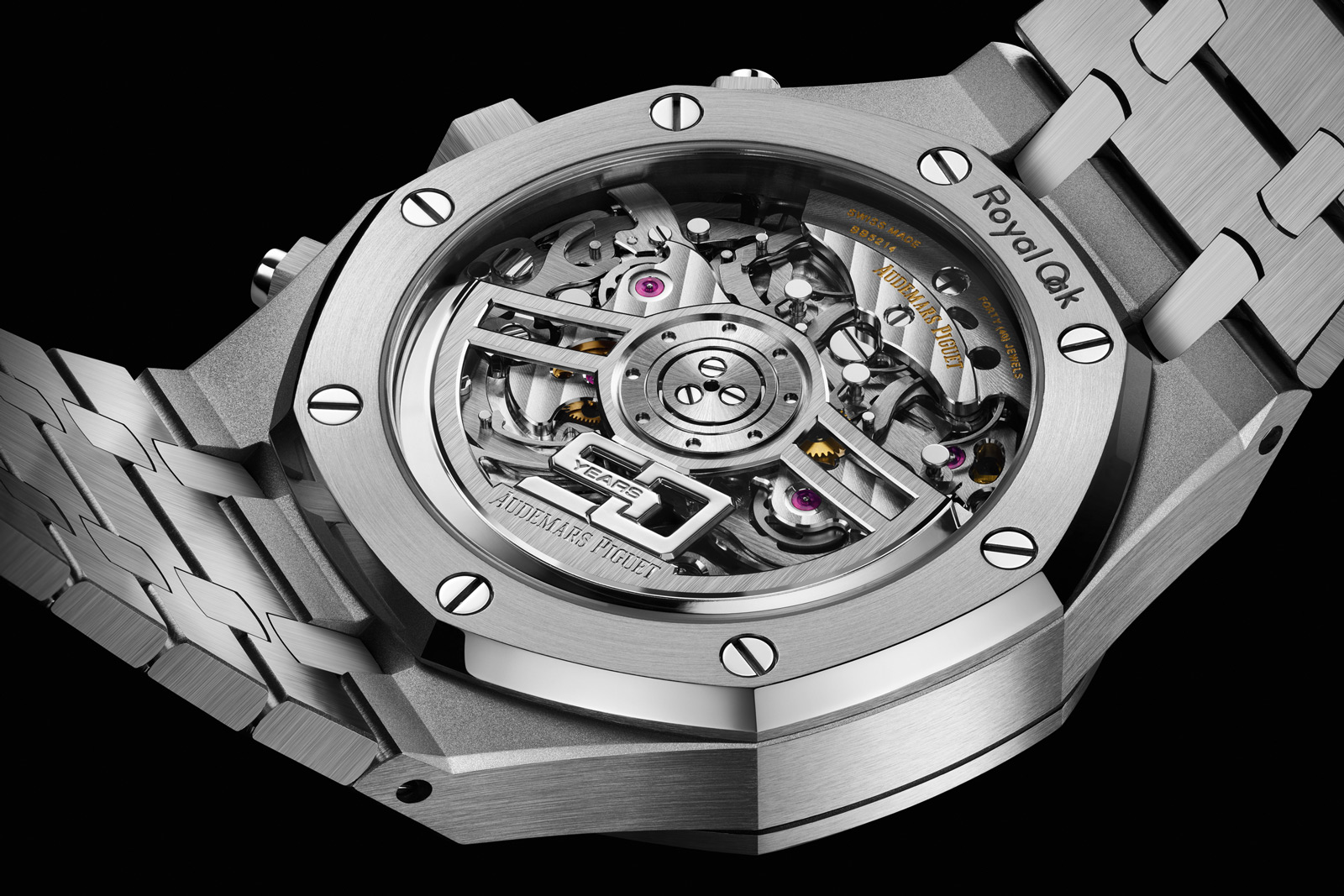 Technically speaking, the ref. 26240 is less of a new launch because the gold version was introduced last year. What sets it apart is the bracelet; last year’s model was available only on a strap.

But ref. 26240 is newsworthy as it marks the first time a Royal Oak Chronograph (ROC) in steel – historically the metal of choice for the Royal Oak – is fitted with an in-house movement.

The cal. 4401 is certainly an upgrade over the Frédéric Piguet cal. 1185 that equipped past versions of the ROC. The new movement has almost everything a high-end sports chronograph should have, such as a vertical clutch and column wheel, while also having extras like a flyback function for immediate restart of the chronograph.

Notably, the cal. 4401 also improves the balance of the dial. Gone is the awkwardly shrunken seconds register at six o’clock, which has been replaced by evenly spaced, equally sized sub-dials. And the date also sits closer to the edge of the dial, instead of sitting at an odd midway position. The result is visually pleasing, just like the facelifted case and bracelet. 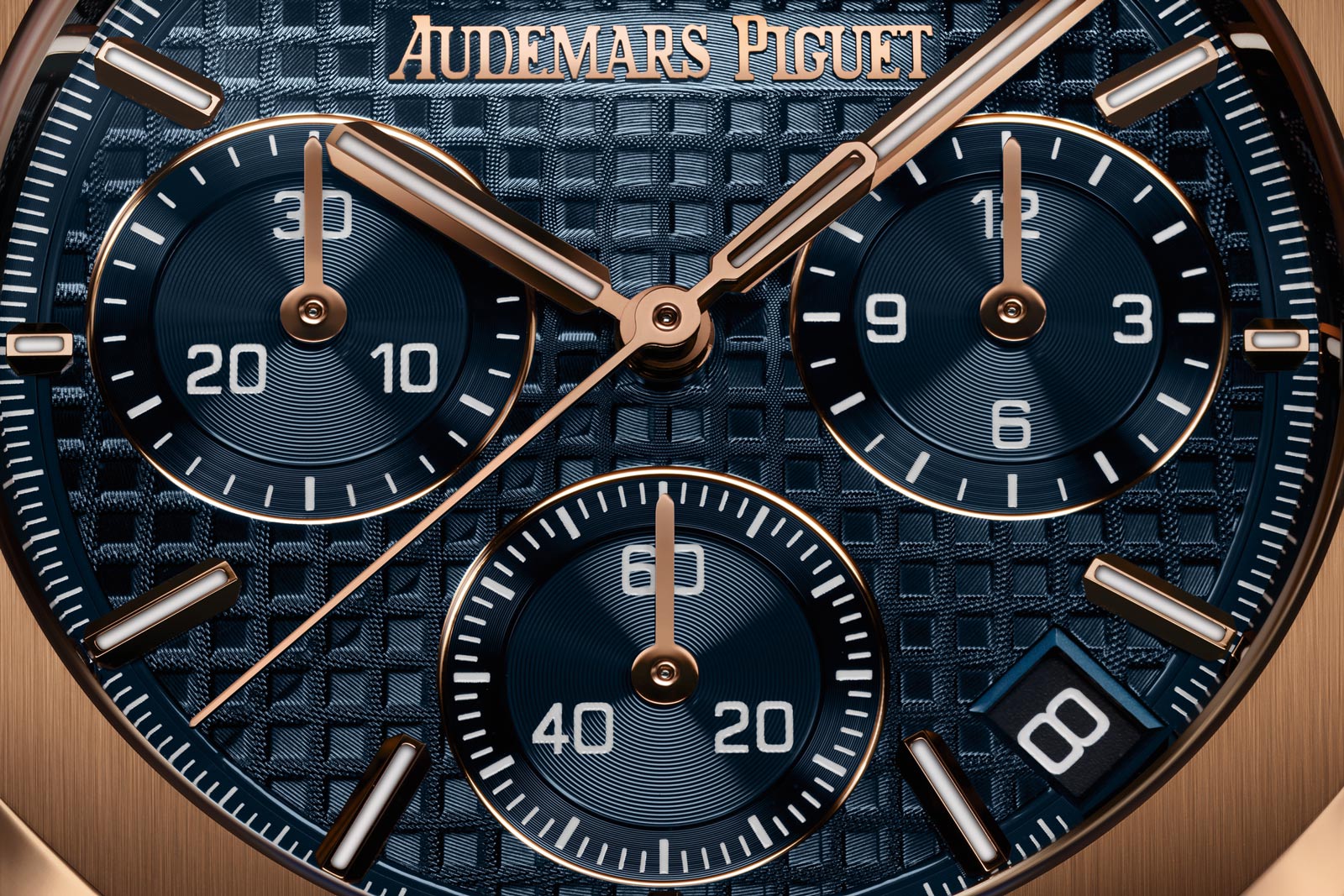 The date is now less obtrusive

The only downside is the case that’s now slightly thicker, up by 1.4 mm to be exact, which brings the height from 11 mm to 12.4 mm. While that chips away at the traditionally elegant profile of the Royal Oak, the case is large enough to accommodate the increase in thickness. At the same time, the sporty nature of a chronograph arguably dictates a thicker case. 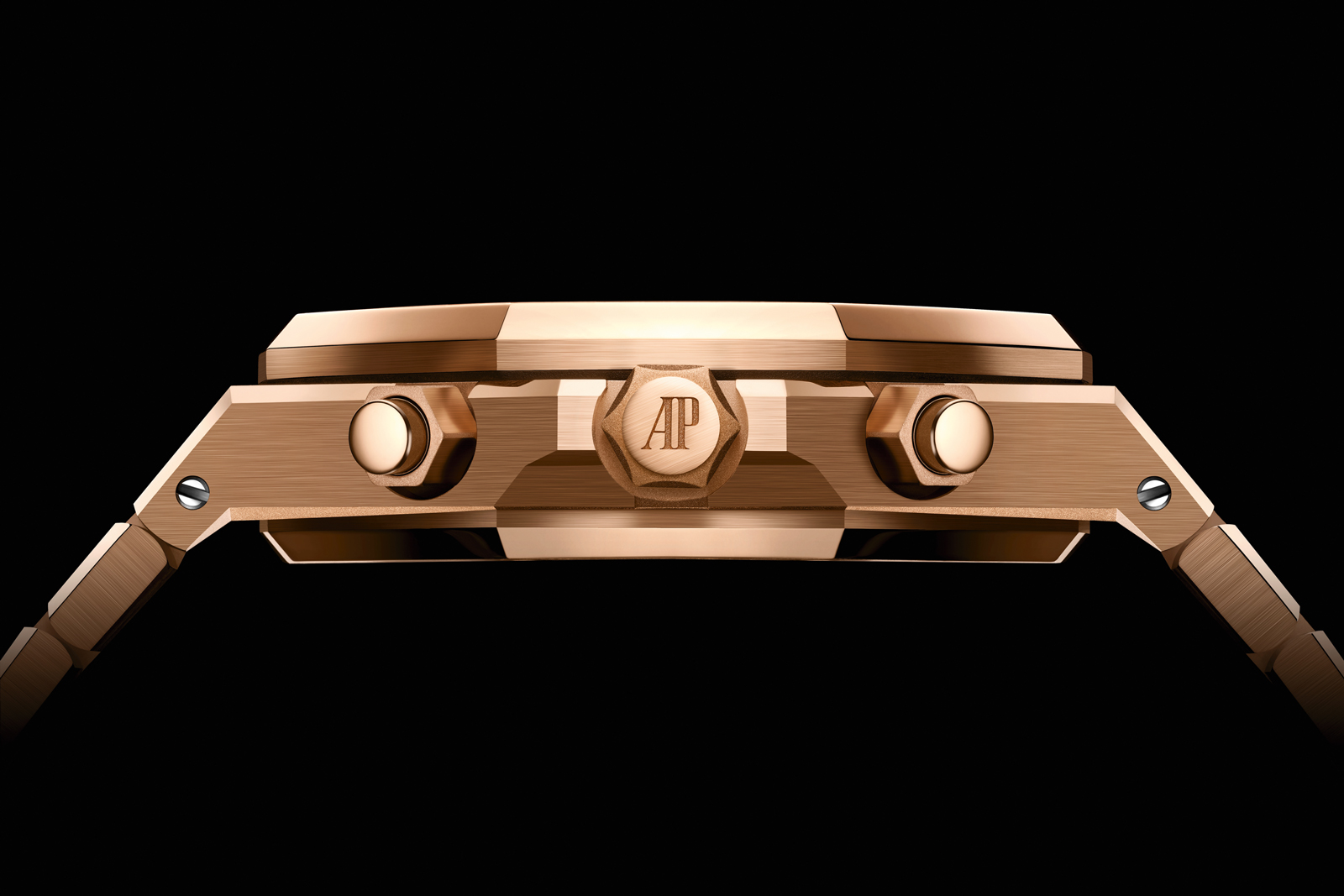 Starting at US$33,800 in steel, the Royal Oak Chronograph is perhaps a better value when compared to its time-and-date counterparts in the same case size, which costs around 30% less – not very much more to pay for a full featured, in-house chronograph. The cal. 4401 is a smartly engineered strong performer that also looks good through the display back.

Audemars Piguet has already launched the solid-gold ROC ref. 26239 last year, but there’s a crucial aesthetic difference between that and the new ref. 26240, aside from the bracelet and anniversary rotor.

The prior ref. 26239 has contrast colour sub-dials, which lends it a panda-esque look, while the majority of the new ref. 26240 have uniform, solid-colour dials.

The expanse of a single colour disguises the complexity of the dial, leaving it looking like a time-only watch from afar, which is good news for anyone who appreciate the complication but prefers a cleaner look. 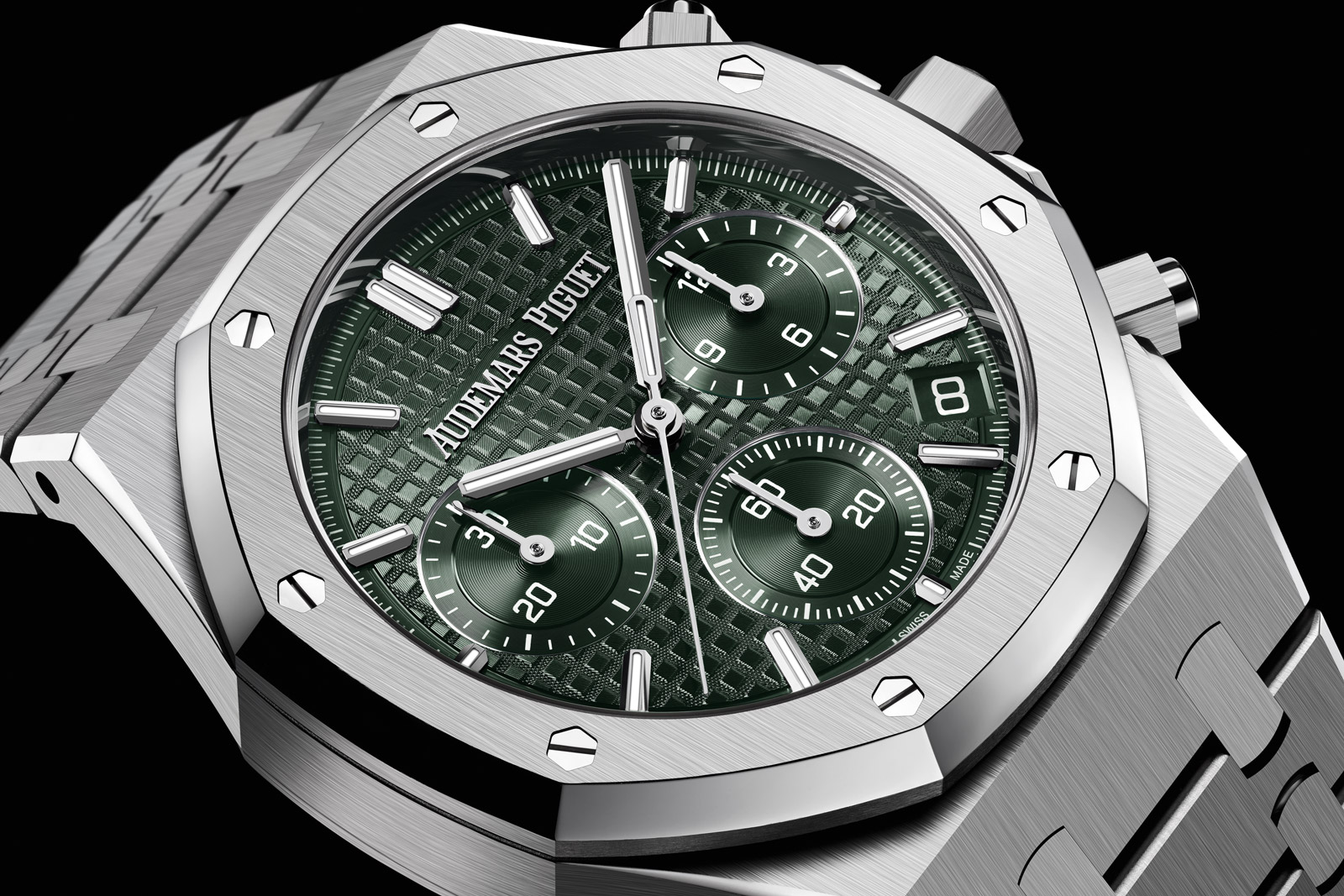 The matching colours sub-dials are especially appealing in a pretty shade like khaki green, but unlike the time-and-date ref. 15550 where khaki green is available only with a gold case, the ref. 26240 has the colour in steel 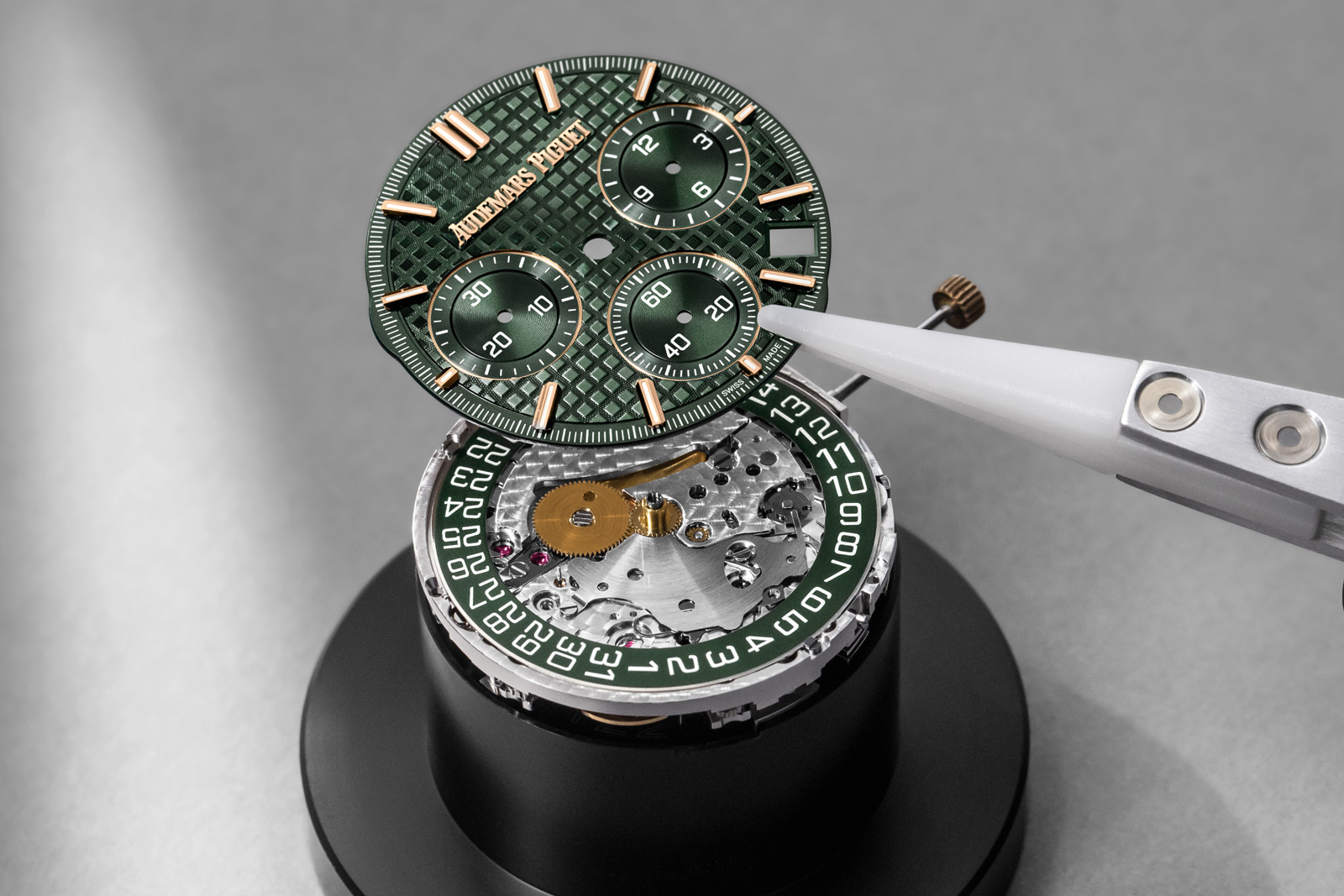 Even the date ring matches the dial, while the applied logo and hour markers complement the case material

As attractive as the new dials are, the highlight is still the movement. The cal. 4401 is notable for being a flyback chronograph, meaning the elapsed indicators can be restarted while running without having to stop and reset. The flyback function relies on additional levers, which adds to the intricate look through the back.

In terms of timekeeping, the cal. 4401 is fitted with a free-sprung balance that’s supported by a full balance bridge, which combined to boost isochronism and stability, now a standard feature in the brand’s latest-generation movements. 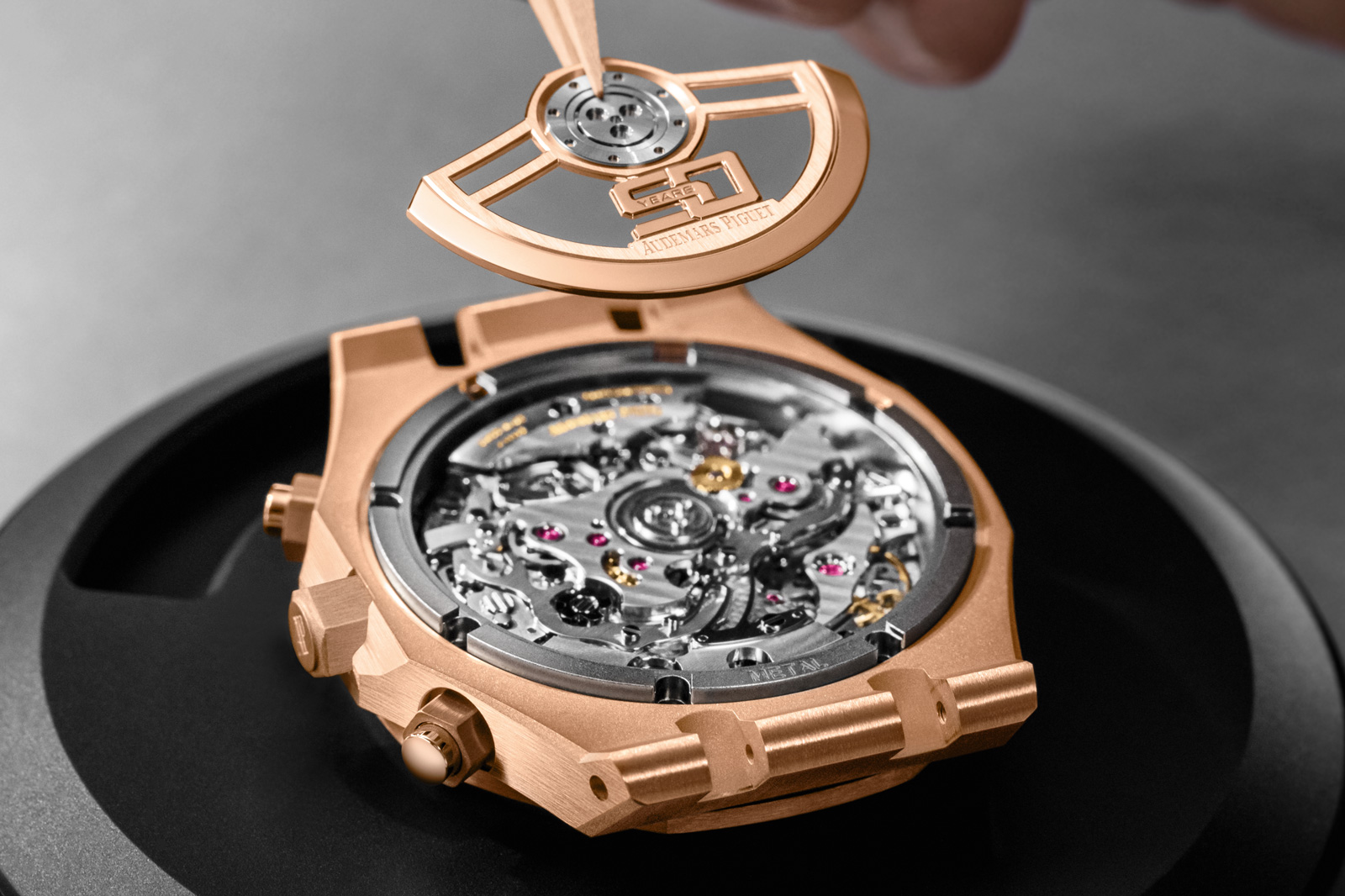 One of the better looking vertical-clutch chronograph movements, which exposes most of the levers of the intricate flyback reset mechanism