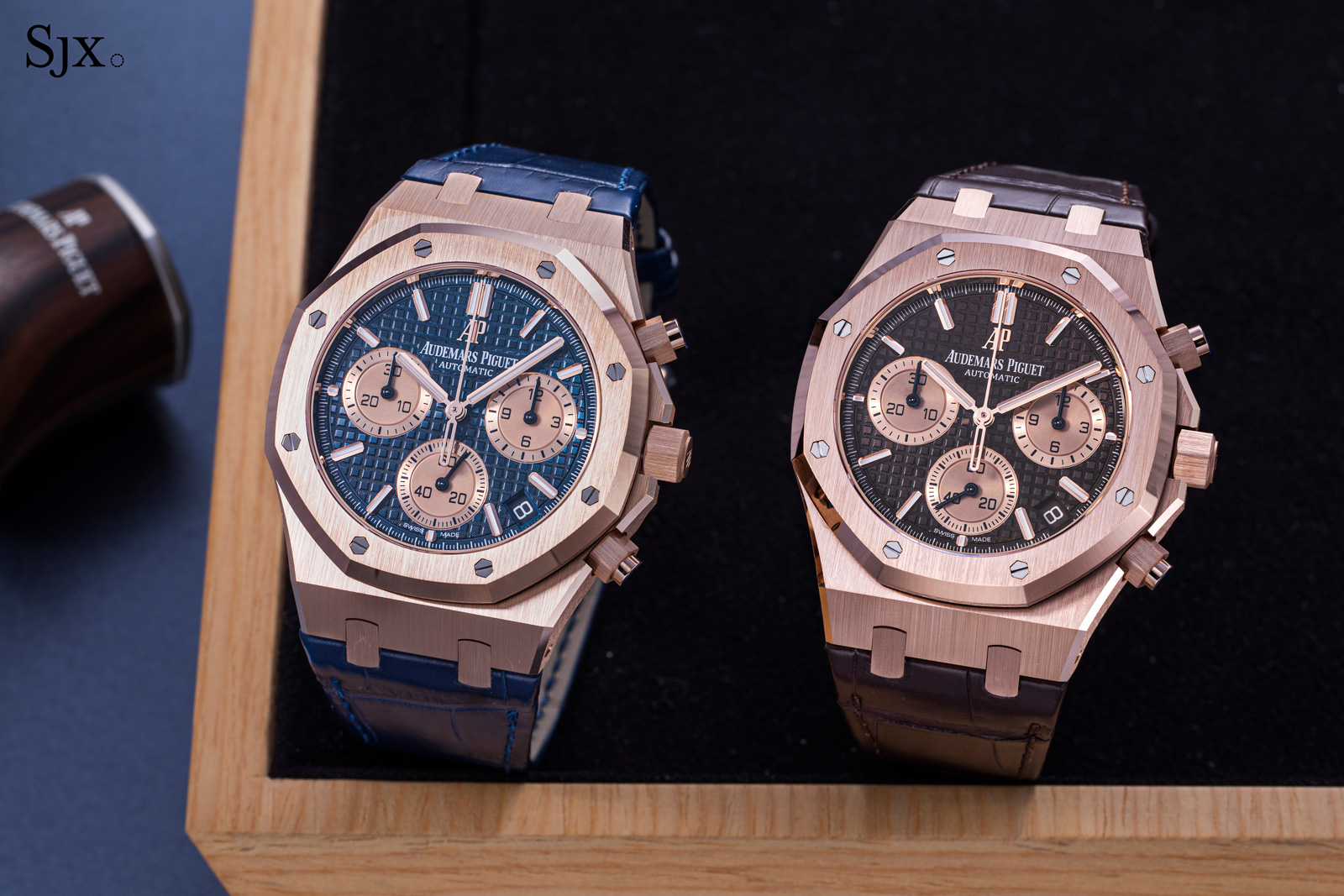 Two years after the base-model Royal Oak got was revamped with a latest-generation, in-house movement, Audemars Piguet has quietly updated its chronograph counterpart. Though it might seem barely changed at a glance, the Royal Oak Chronograph ref. 26239 is very much a different watch, and one that’s tangibly improved.

Launched earlier this year, the new Royal Oak Chronograph retains the recognisable style of its predecessor and is seemingly alike, save for a crucial detail. The chronograph registers have been lightly revised, giving away its most important upgrade – the cal. 4401 inside that’s the first in-house calibre found in the Royal Oak Chronograph. 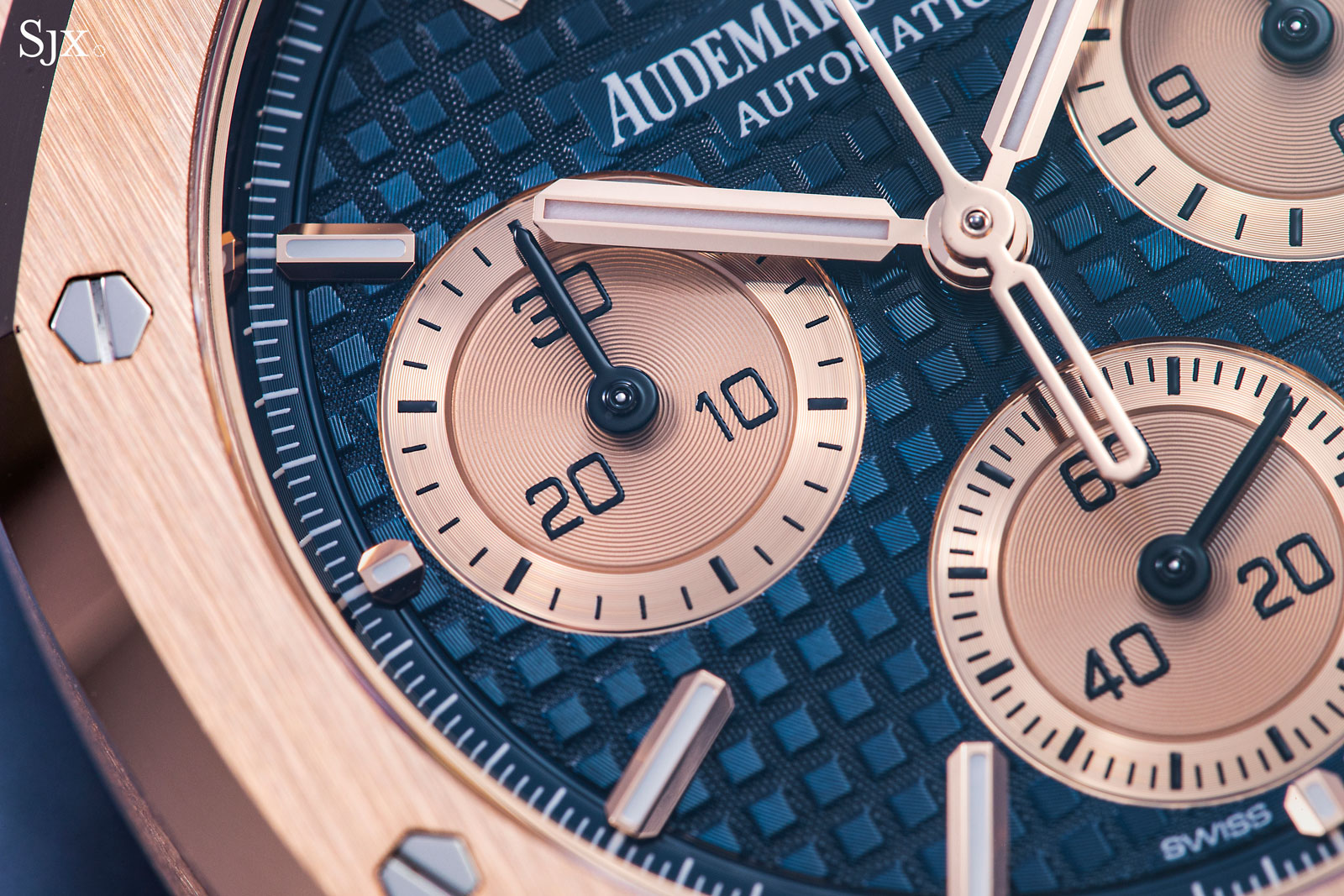 The new movement made possible a redesigned dial that is subtly different, but substantially better. Studying the dial layout of a chronograph is an exercise in details, but it reveals how proportions are crucial to beauty.

There aren’t many chronographs on the market today with perfect proportions, simply because most movements in use today were designed years ago for smaller cases and dials. The dial on the new Royal Oak Chronograph, however, stands out as an excellent example that is almost perfect.

With half a dozen new calibres having made their debut with the Code 11.59 in 2019, from time-only to tourbillon, Audemars Piguet has a stable of latest-generation movements that are being progressively installed in the Royal Oak.

Two years ago, the three-hand ref. 15500 was the first Royal Oak to get an upgrade with the cal. 4302, and it was a hit. On the other hand, the new Royal Oak Chronograph ref. 26239 made its debut earlier this year to a more subdued reception. 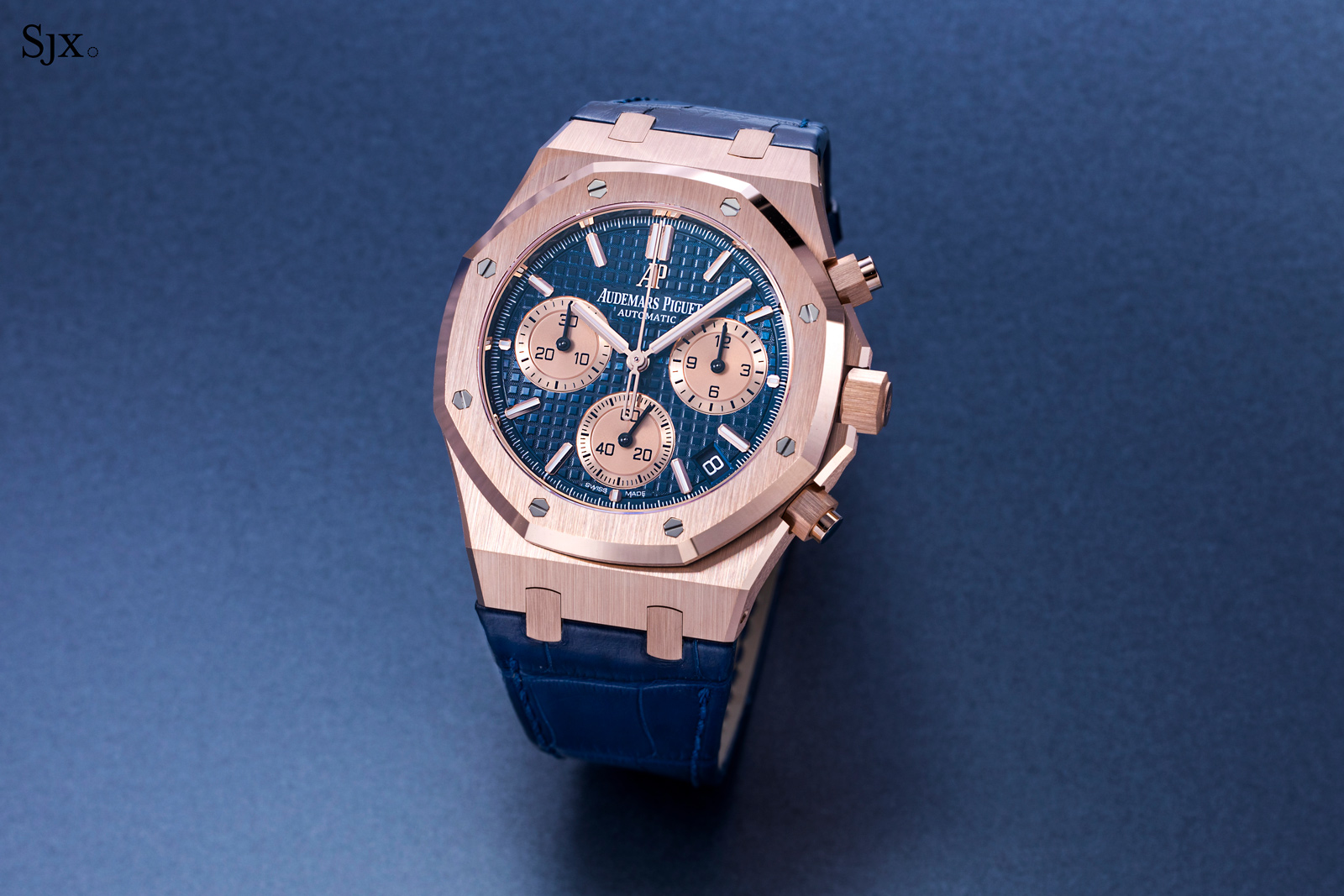 There are a couple of reasons for that. One is the fact that the new chronograph is only available in gold for now. The steel version, which is surely on the way, will definitely be hot property when it arrives.

At the same time, other AP releases for the year more eye-catching. The line up included an ensemble with green dials, which included a Royal Oak “Jumbo” in platinum, and the controversial Royal Oak Concept Black Panther.

Still, the new chronograph is worth a look. The Royal Oak is an iconic design – one that’s especially luxe in gold – that now has a movement worth of its reputation. 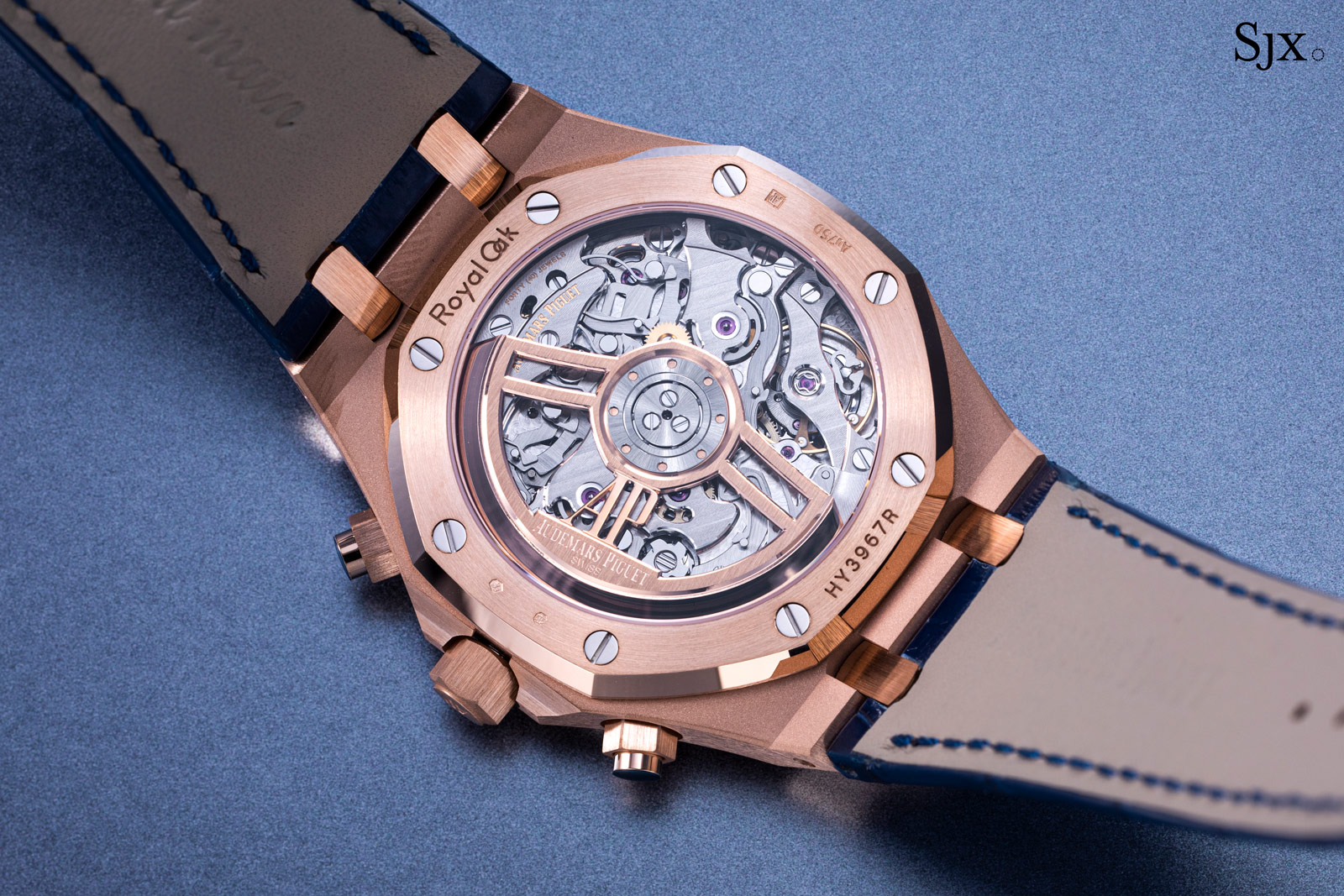 Visually, the new chronograph sticks to the same formula, but it is a substantially better watch technically speaking. Replacing the Frederic Piguet cal. 1185 that’s powered the Royal Oak Chronograph for over two decades, the cal. 4401 has a sophisticated, modern construction with a vertical clutch and 70-hour power reserve, and substantially elevates the tenor of the Royal Oak Chronograph.

The new movement makes the dial that much better, in both proportions and layout, creating a far more attractive face for the watch. It’s not immediately obvious, but once noticed it is impossible to miss the superior aesthetics of the new model. 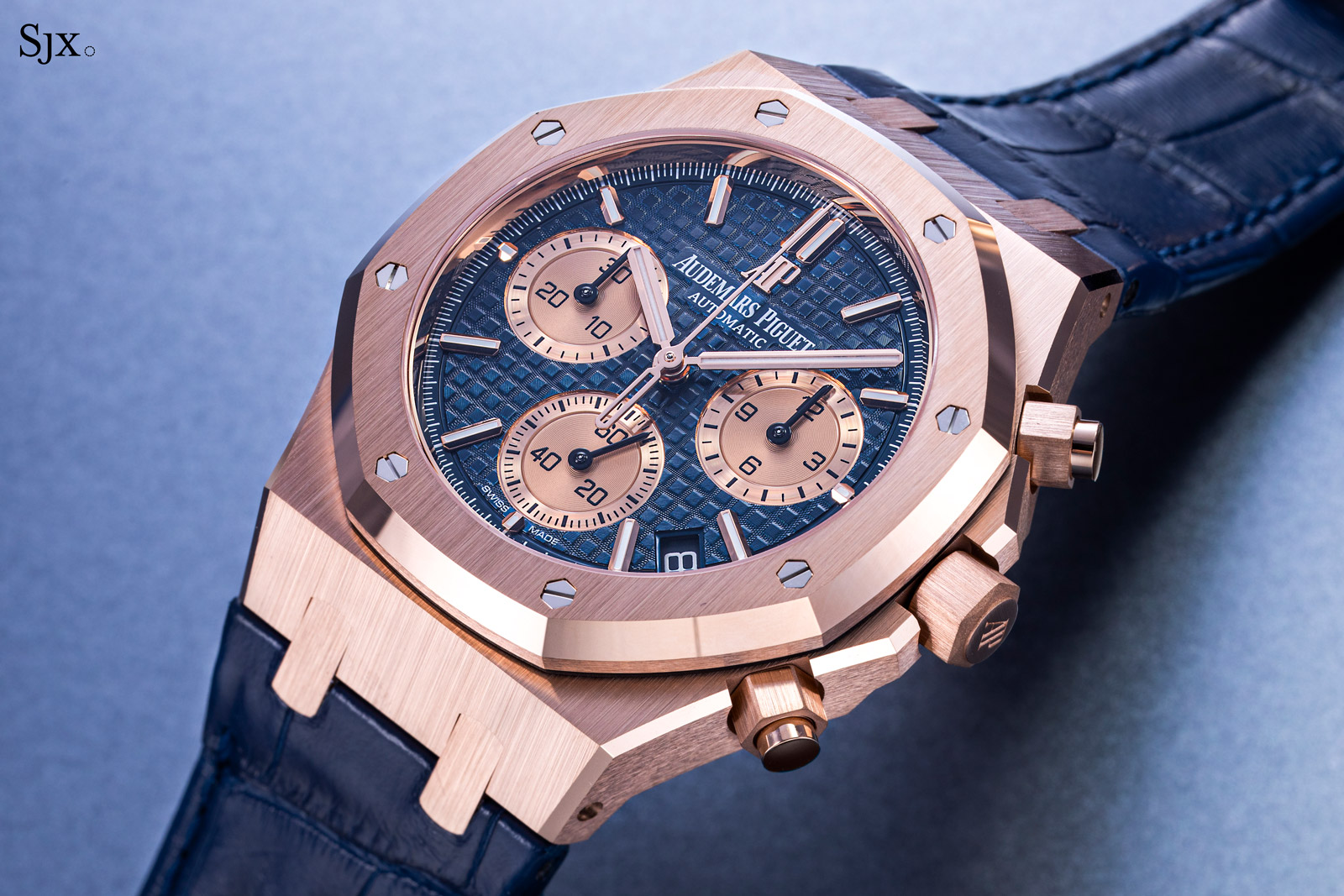 Despite being arguably the archetype of the luxury-sports watch, the Royal Oak is generally priced reasonably at retail (secondary market premiums are another matter entirely), which holds true for the new chronograph.

The new Royal Oak Chronograph on strap retails for a bit under US$46,000, but the recently-launched Patek Philippe Aquanaut Chronograph ref. 5968G comes in at almost US$70,000. At the same time, the new Royal Oak Chronograph costs only about 6% more than its predecessor, which actually makes it a better buy given the new movement. And being only available in gold, it should be relatively easier to obtain one (but the steel version soon to come will be another matter entirely).

The only downside of the new chronograph is that it’s only available in the largest, 41 mm case, at least for now. The earlier version, on the other hand, was also offered in a compact, 38 mm size thanks to the smaller movement. In contrast, the new cal. 4401 is too big for a 38 mm case. 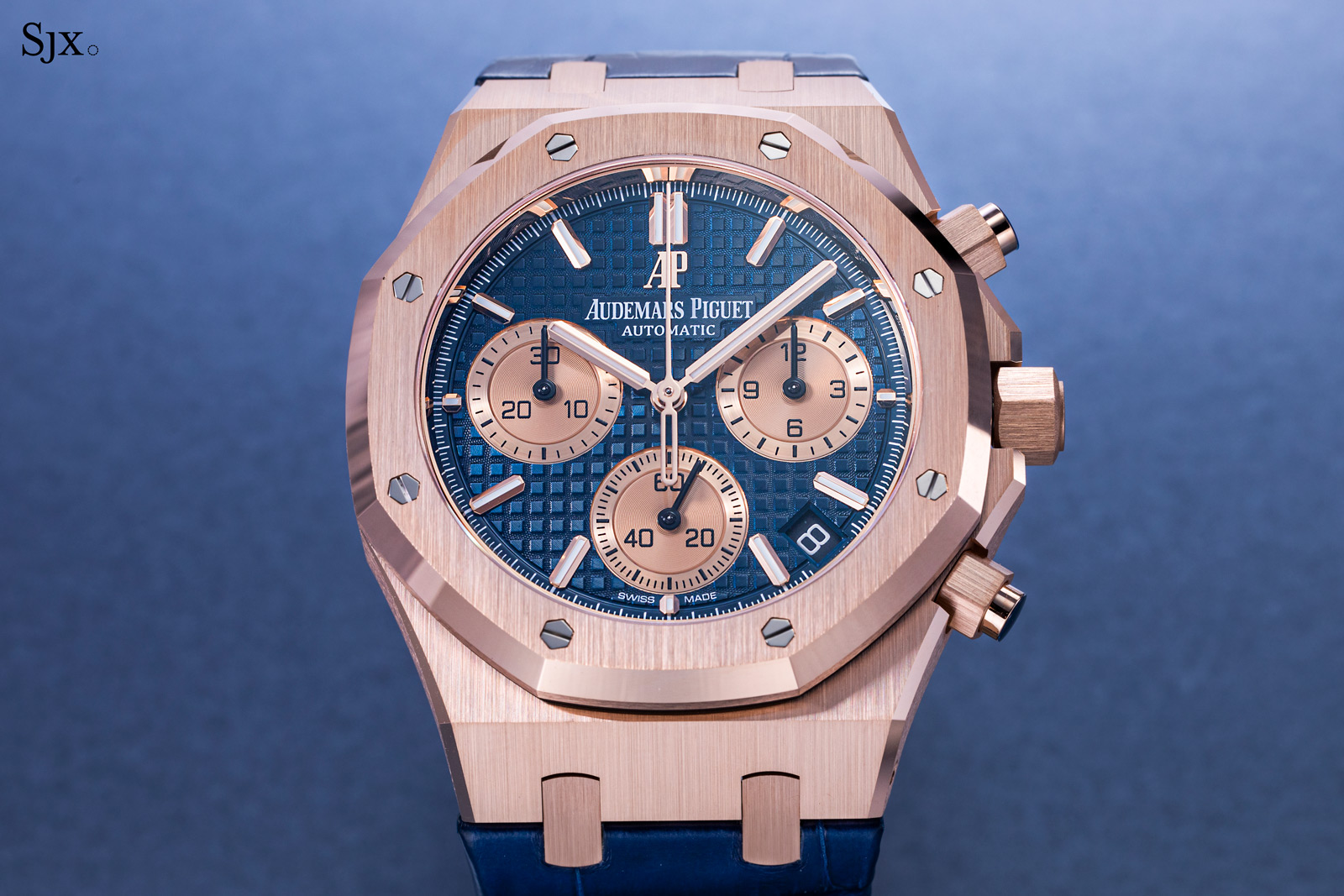 Right now, the new Royal Oak Chronograph is now available only with two dial variants – blue or brown. Both are pretty, especially with the contrasting pink gold sub-dials and case.

Both are a fairly conservative look that stick to the same recipe used for earlier generations of the Royal Oak Chronograph. Given that AP has used a wide palette for its chronographs in recent years, from green to purple, it is likely that the new chronograph will get a wider array of dials soon. 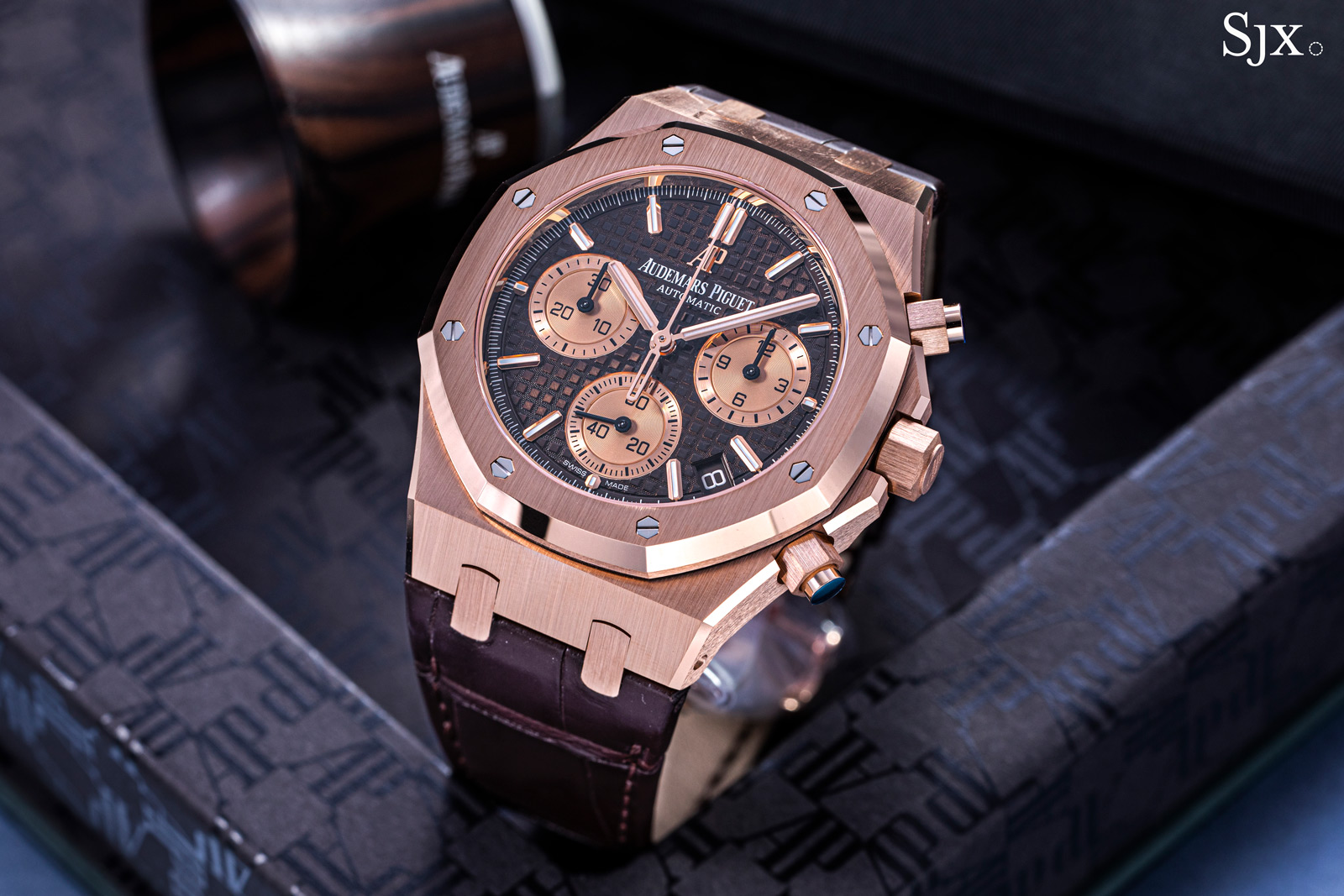 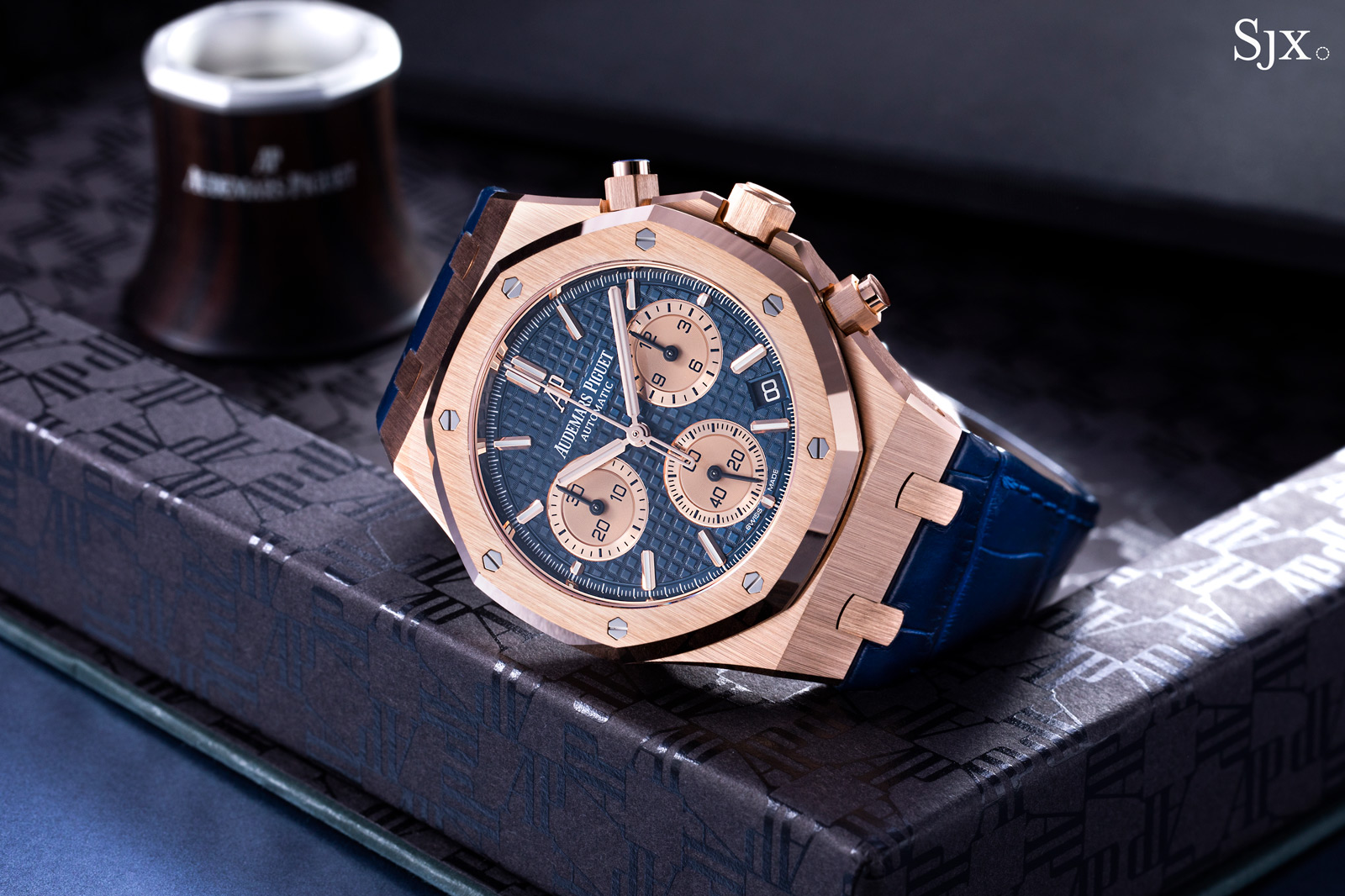 While the colours are familiar, the discreet redesign of the dial – to accommodate the new movement – does enhance the overall look. In fact, the new look is modestly changed but significantly improved. 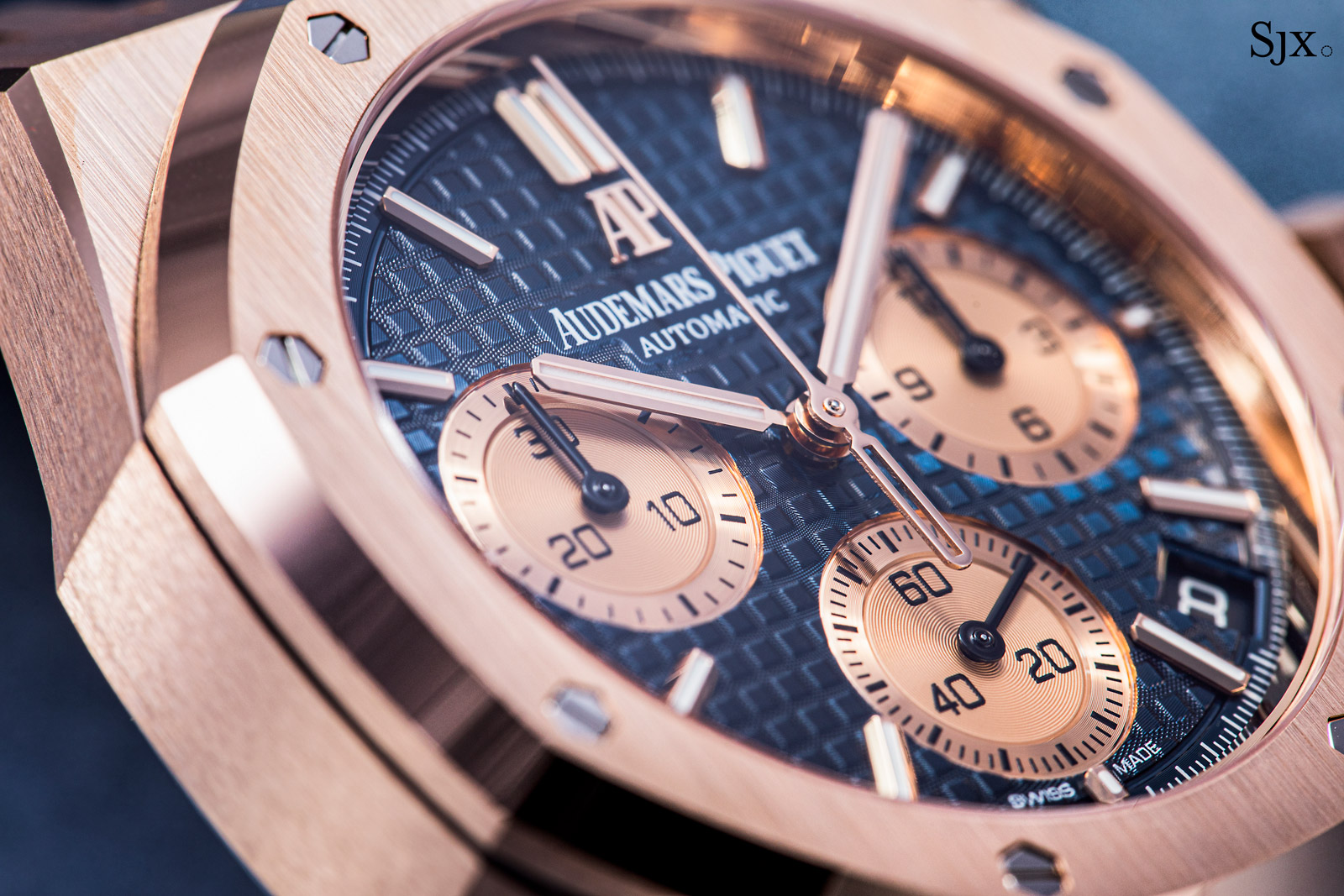 The most obvious change is the larger seconds sub-dial at six, which is now the same size as the chronograph counters. The equally sized registers are balanced and pleasing.

The cal. 4401, on the other hand, eliminates that problem. Like most modern chronograph movements, the twin counters at three and nine are slightly above the horizontal midpoint of the dial. This allows more space for the small seconds, and larger sub-dials overall, reducing clutter and improving legibility. 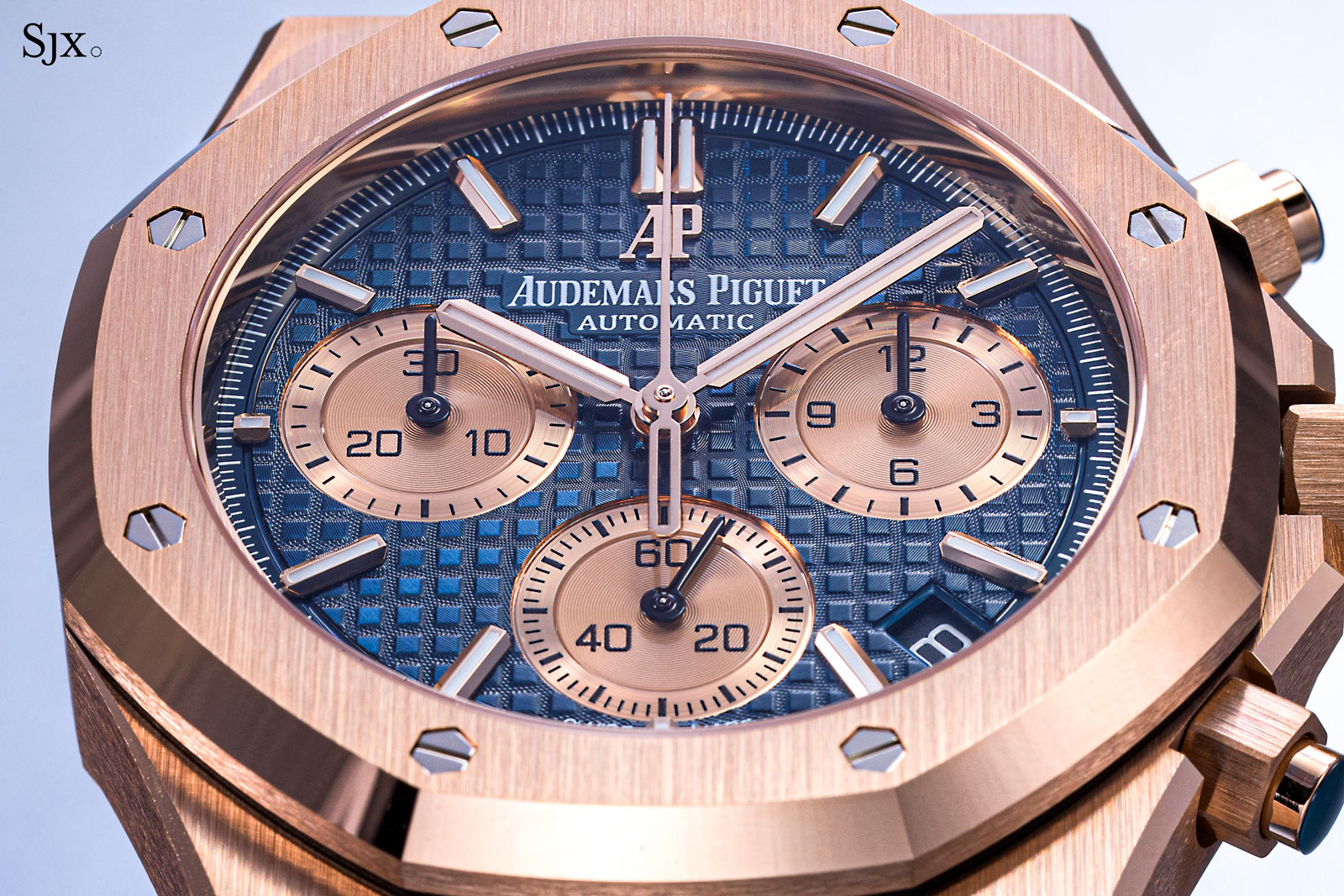 At the same time, all three counters are now positioned further from the centre – the cal. 4401 is a larger movement – leaving them almost at the edge of the dial. This gives the dial better proportions and balance.

All in all, the repositioning and resizing of the sub-dials bring about a major improvement in the dial, which is now more handsome. 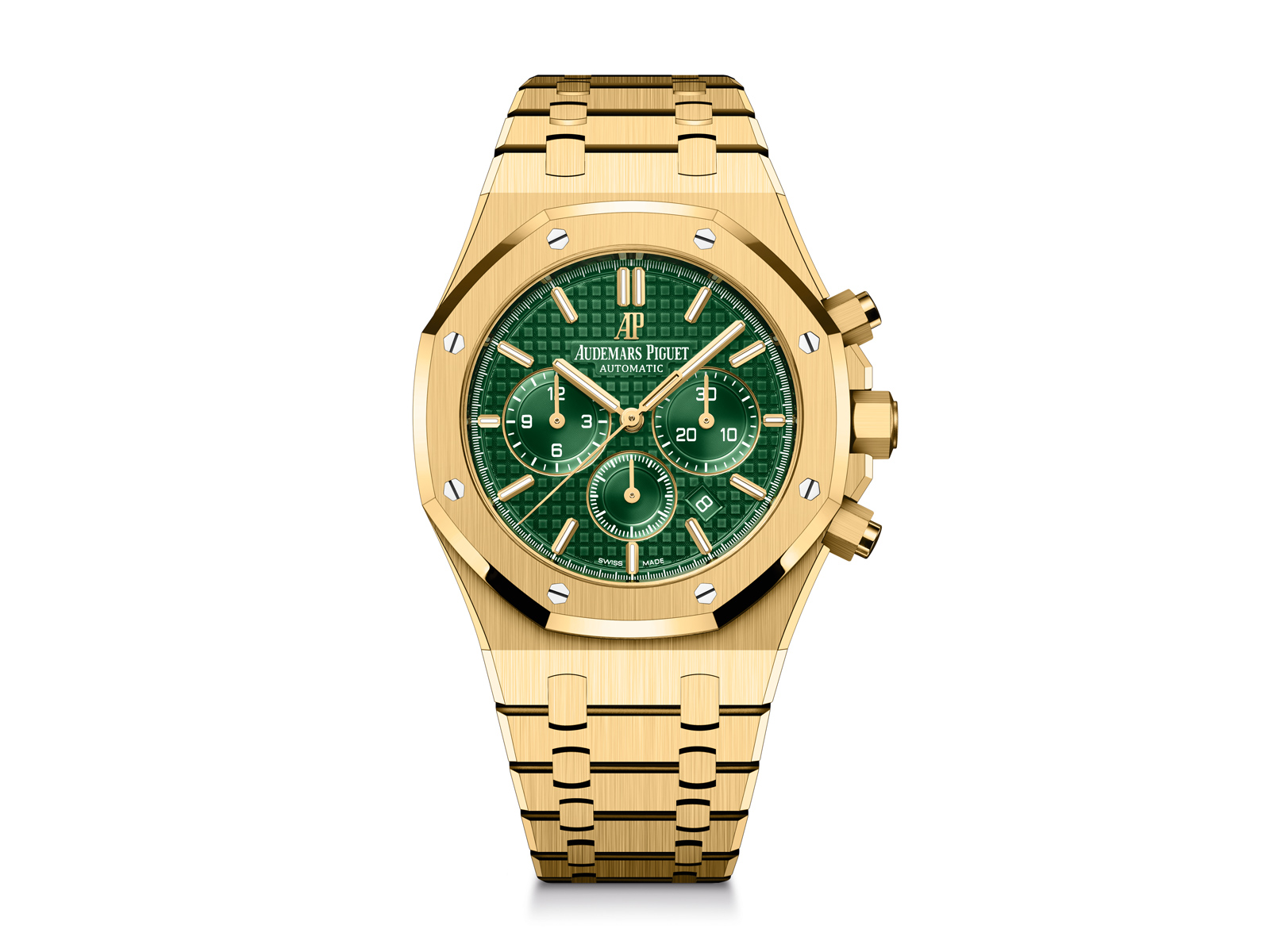 For comparison, an example of the preceding generation of Royal Oak Chronograph – note the smaller seconds sub-dial at six

Appealing at arm’s length, the new dial is also impressive up close. Amongst the top competitors in the luxury-sports watch arena, the tapisserie guilloche dial still stands out as the most artisanal.

The tapisserie guilloche dial is finely executed, but perhaps too familiar for most watch fanatics, being the same pattern found on the Royal Oak since 1972. But for those new to luxury watches, the chequerboard pattern with its characteristic grains is an intricate, appealing finish created the old-fashioned way, with a hand-operating, straight-line engine. 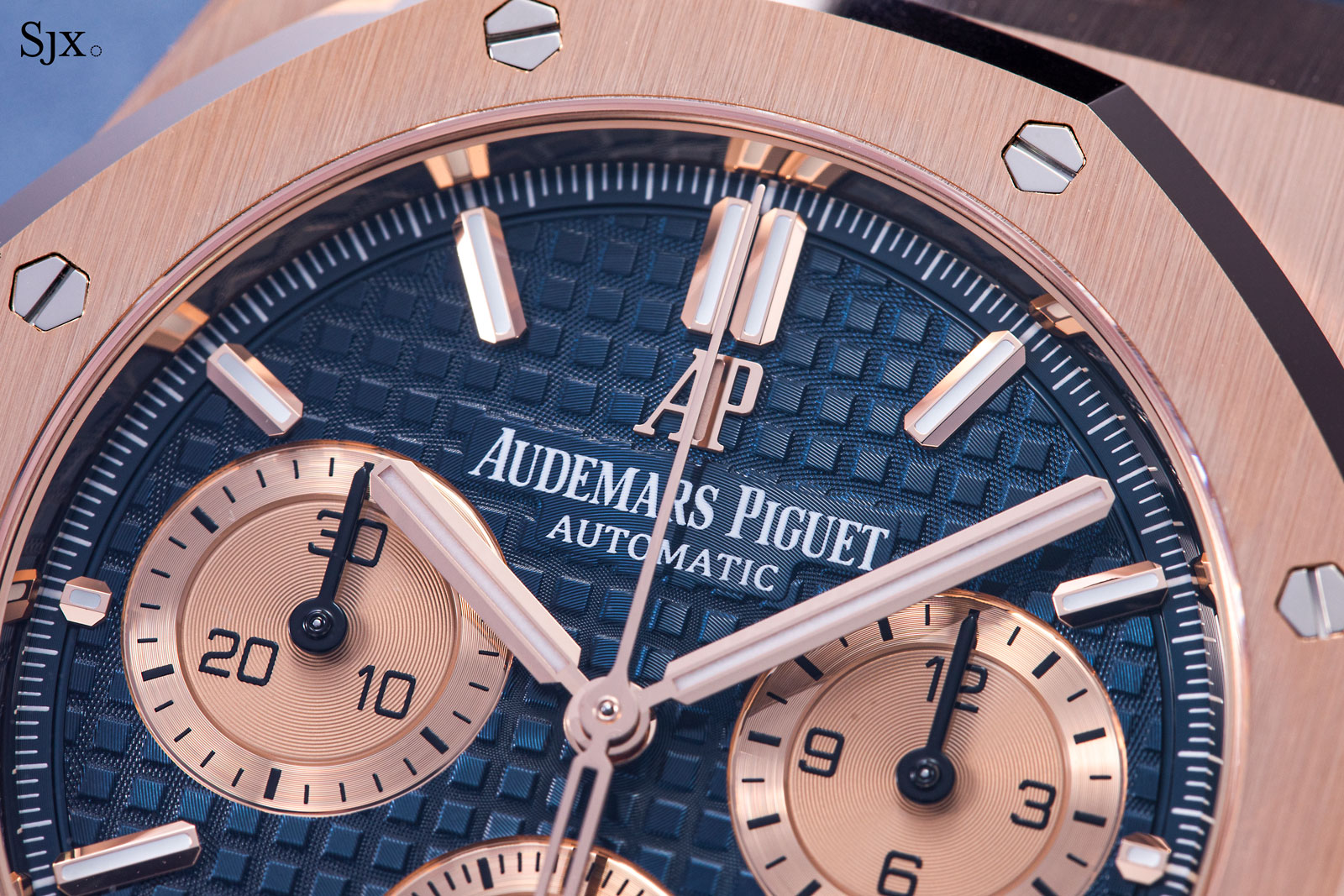 The hands and hour markers are solid gold

Beyond the obvious guilloche, the dial is finished well in all its details. In fact, it appears to be slightly finer than the dials found in the preceding generation.

The sub-dials, for instance, have been treated better. The registers are distinctly two level, each with a concentric pattern of different grain. The outer tracks of each has a finer pattern than the centre, creating a metallic sheen that outlines each counter, allowing it to stand out against the dark tapisserie dial. 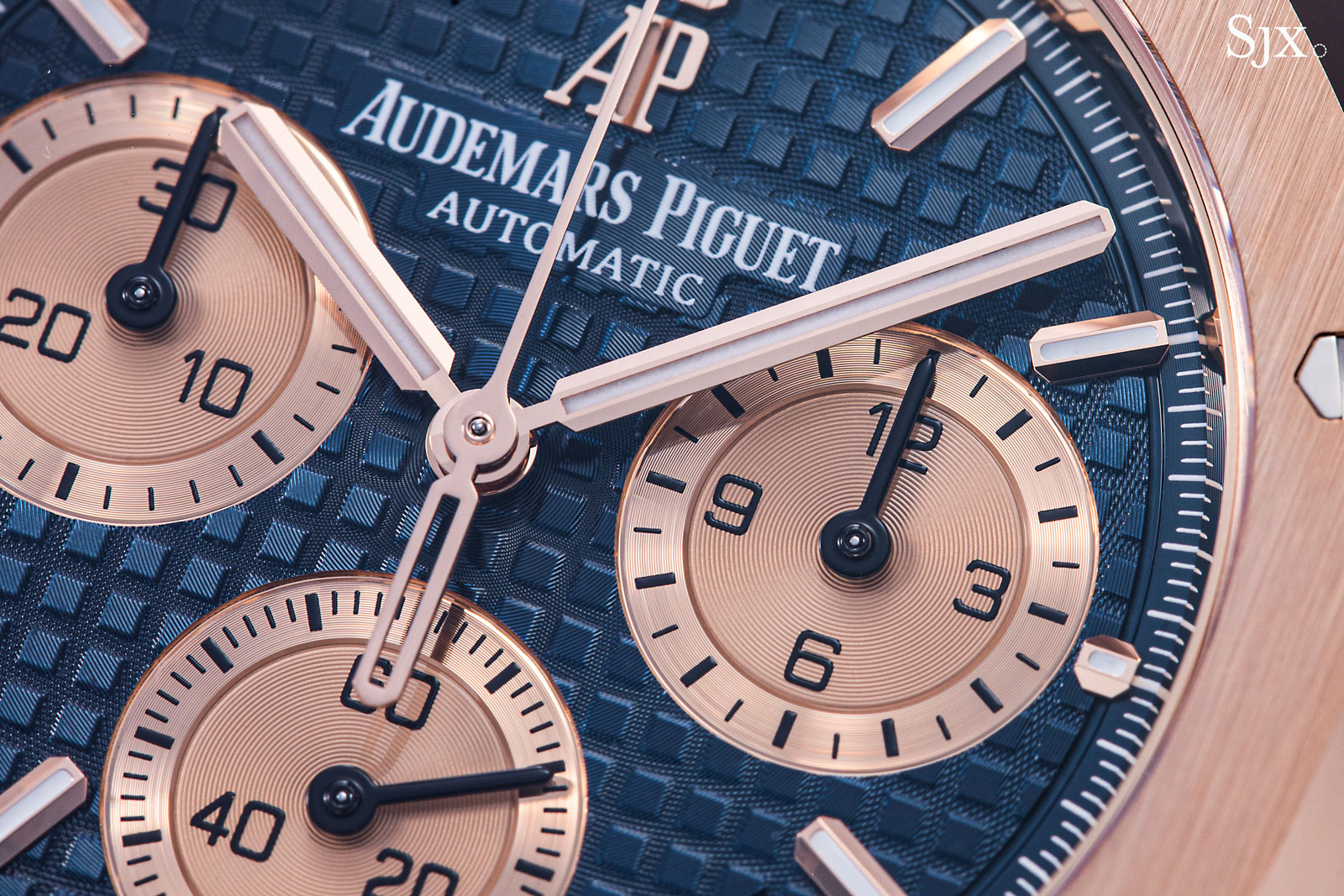 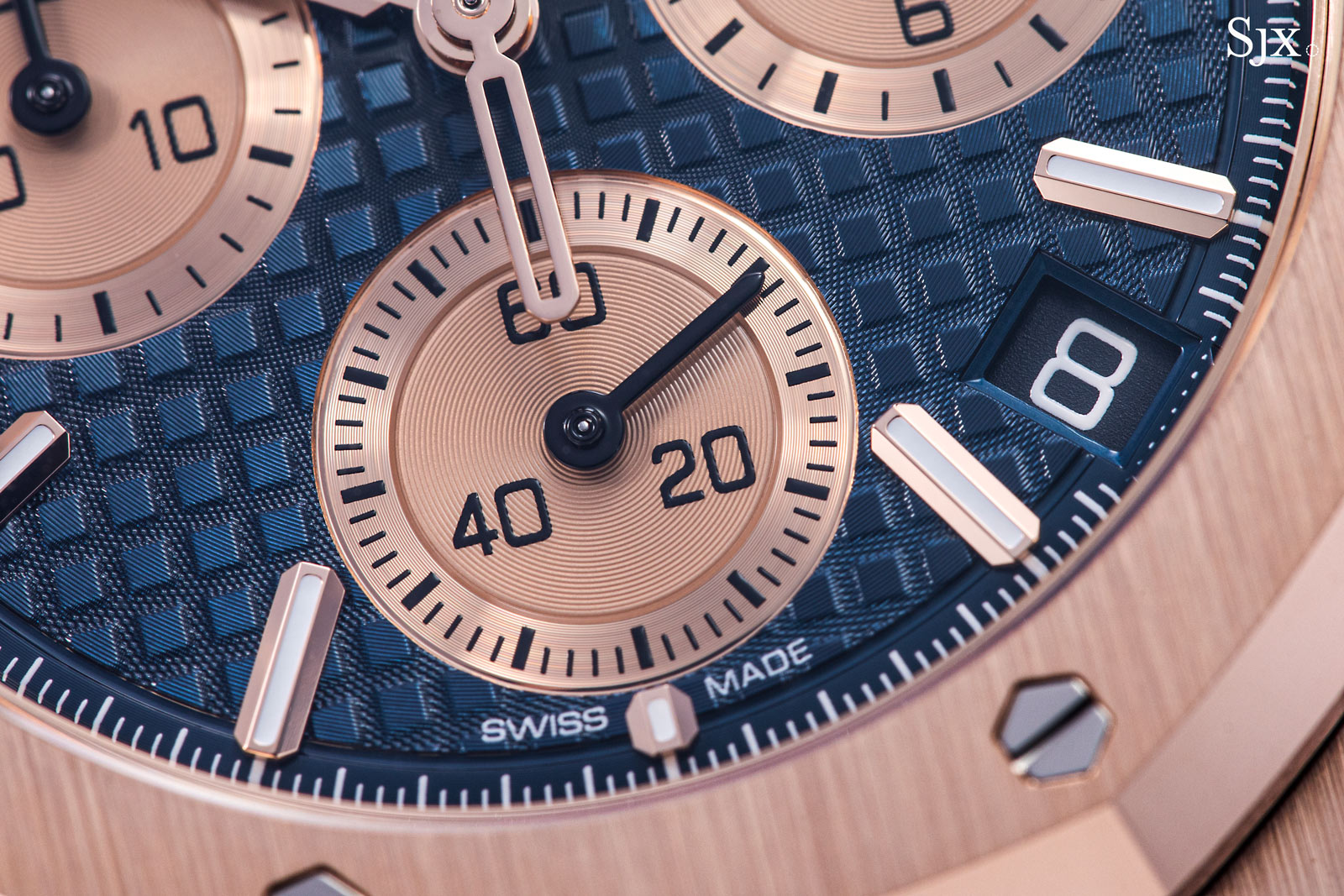 At the same time, the printed scales on the sub-dials are clean and crisp, even on the concentric patterning

Last but not least, the date sits right in between the four and five o’clock markers, positioned close to the edge of the dial. It’s definitely an improved look compared to the date window of the previous generation, which seemed to hang in an awkward position too far from the edge.

The Royal Oak case is the defining element of the design, not only due to the recognisable shape, but because of its exquisite execution. So while the dial is new, the case is essentially unchanged, save for a thicker profile to accommodate the new movement. 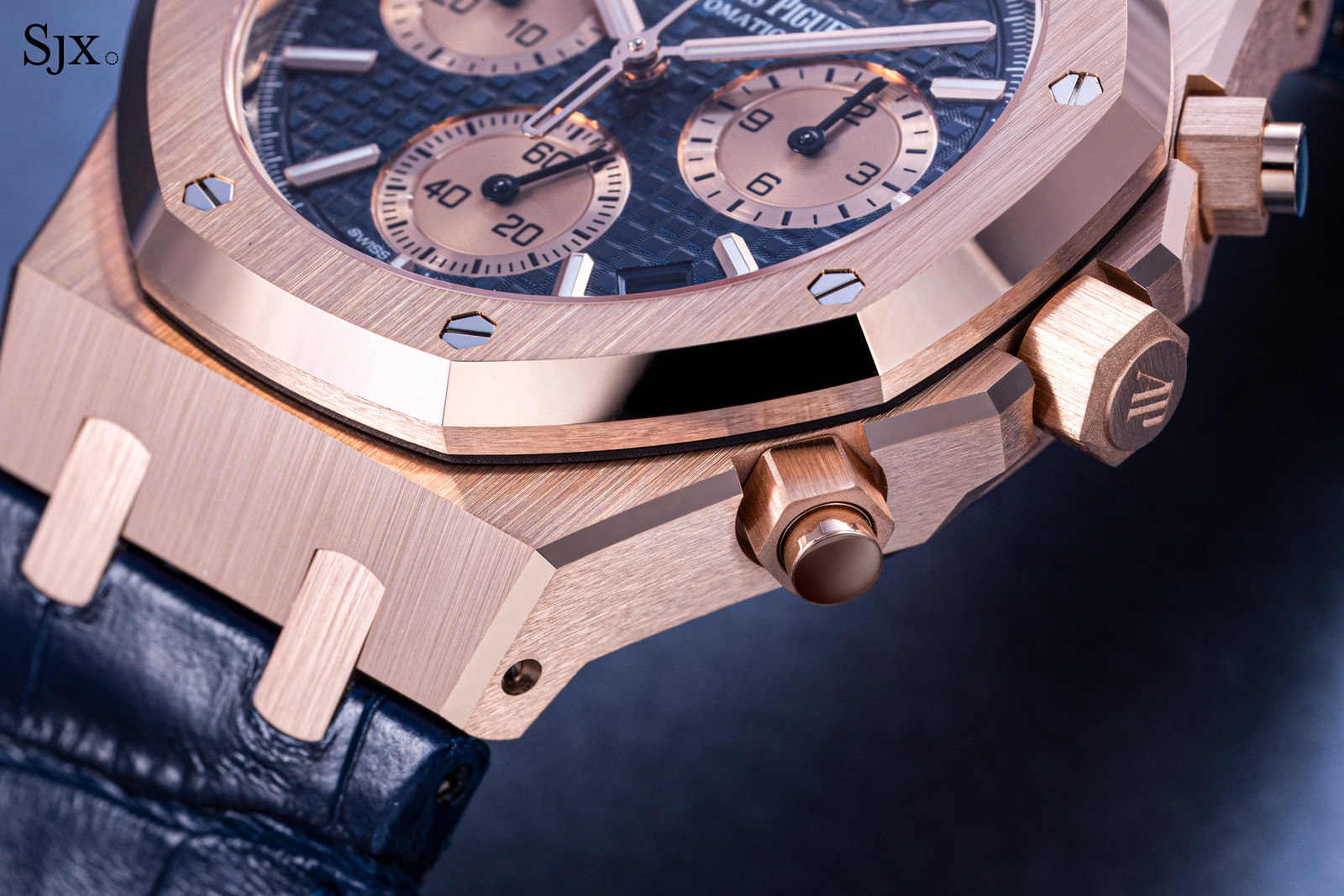 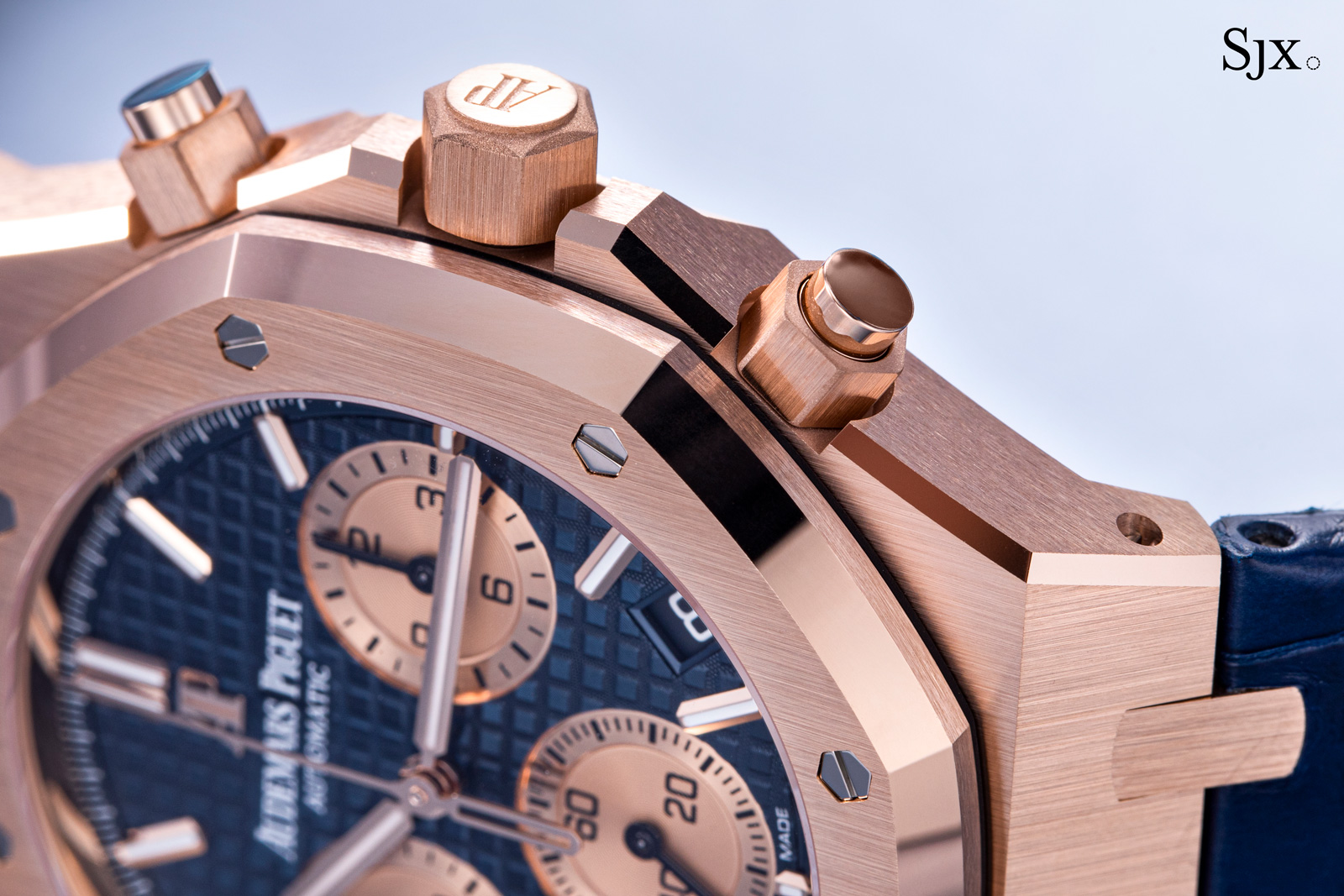 To echo the angular bezel, the screw-down crown and pushers are octagonal

Less apparent but equally impressive is the crown guard that continues the lines of the case seamlessly. Like the bezel, it is made up of three visible planes with different finishes, including the elegant, polished bevel that runs along the length of the watch and onto the bracelet. 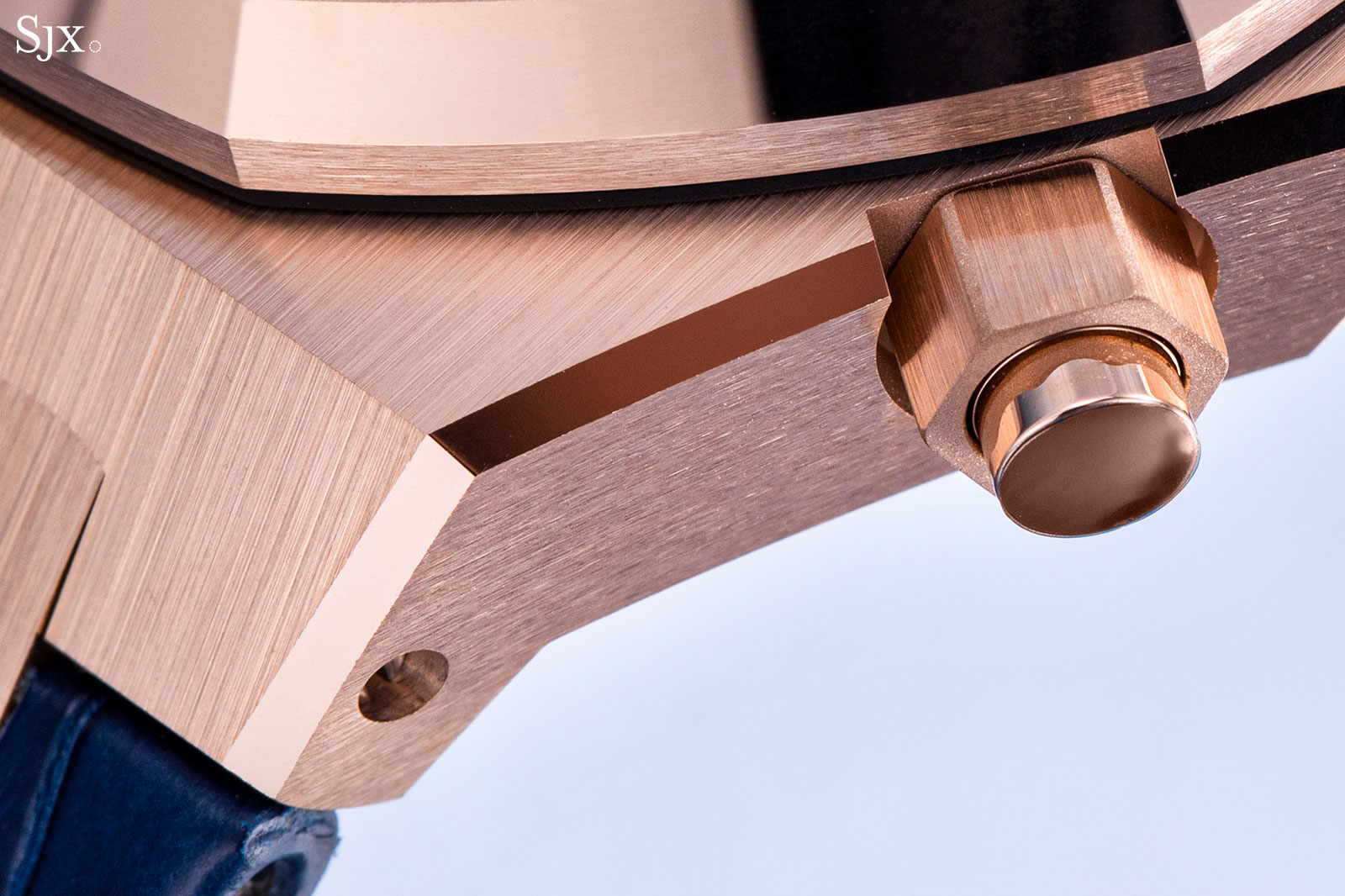 The appealing proportions of the dial are courtesy of the cal. 4401. After some two decades of faithful service, the cal. 2385, which is a Frederic Piguet cal. 1185, is gradually being retired in favour of the cal. 4401. Amongst the technical features of the cal. 4401 are features now standard in high-end calibres.

Doing away with a regulator index, the cal. 4401 has a free-sprung balance wheel with six inertia blocks for regulation, a set up that isochronism and stability. That said, the balance spring is flat instead of an overcoil, forgoing an opportunity to further enhance isochronism (albeit at the expense of extra height).

The balance is also secured with a full bridge, as opposed to a cock anchored on one side, which also improves stability. It also incorporates an interesting detail, the hairspring stud holder in the form of a pincer.

At the same time, the cal. 4401 has a higher frequency of 28,800 beats per hour, but it still manages a power reserve of a convenient 70 hours, complying with the three-day norm for modern watches. The stud holder holds the stud like a pincer

The chronograph mechanism is constructed in a manner fit for a sports watch.

To start with, the column wheel is unusually sturdy, being flat with five wide teeth. The chronograph levels are similarly flat, no doubt a conscious decision to slim the movement as much as possible. Besides the column wheel, the chronograph also features a vertical clutch, which means the chronograph can be left running without causing undue wear on the wheels, which is not the case for a horizontal clutch chronograph.

In theory, a vertical clutch allows for precise start and stop of the chronograph seconds, since it is activated and deactivated via friction, avoiding the play between the teeth that is often present on a horizontal clutch. But that only holds true if the fourth wheel (which makes a revolution every minute) sits directly and vertically above the chronograph seconds wheel.

In contrast, cal. 4401 has a conventional gear train that has its fourth wheel at six o’clock, driving the running seconds. As a result, the chronograph seconds is not activated directly via the vertical clutch. Instead an intermediary gear transfers the energy from the pinion of the fourth wheel to the central chronograph seconds, resulting in extra play between the additional wheels (unless the wheels have sprung teeth, which doesn’t appear to be the case here).

That said, the cal. 4401 is an excellent calibre that has a flyback mechanism, which means additional levers to reset the chronograph while running, allowing for an instantaneous start of a new measurement.

Having been designed from the ground up, the cal. 4401 incorporates several thoughtful and interesting elements. One notable example is the chronograph reset mechanism. Instead of a one-piece hammer that’s the norm in most contemporary constructions, the cal. 4401 relies on individual reset hammers for each elapsed time counter, with each of the reset hammers in turn having a tension spring to ensure optimal contact with the heart cams.

In other words, the chronograph wheels for the hours, minutes, and seconds all has their own reset hammer – perhaps an over-engineered approach to a simple function, but it provides a bit more to admire through the display back.

The finishing of the movement is detailed, clean, and precise, mostly accomplished with automated methods but with touches of hand-applied decoration, like the bevelling on the rotor for instance. Attention has been paid to all components, as evidenced by the thorough, varied finishing on all parts, regardless of size. The Royal Oak Chronograph in gold is lustrous and, at a glance, seems barely changed from the previous generation. But while familiar, it is substantially improved.

The dial has been tweaked for the better with subtle adjustments that are crucial in bringing the design closer to perfection. That’s possible with the cal. 4401 that’s not only a new calibre but also more appropriate for the 41 mm case.

Importantly, the new movement has superior mechanics that promise better timekeeping as well as greater practicality with the longer power reserve.

All in all, the new Royal Oak Chronograph is an ideal, even perfect, improvement over its predecessor. Limited Edition: No
Availability: Only at boutiques
Price: US45,800; or 63,700 Singapore dollars