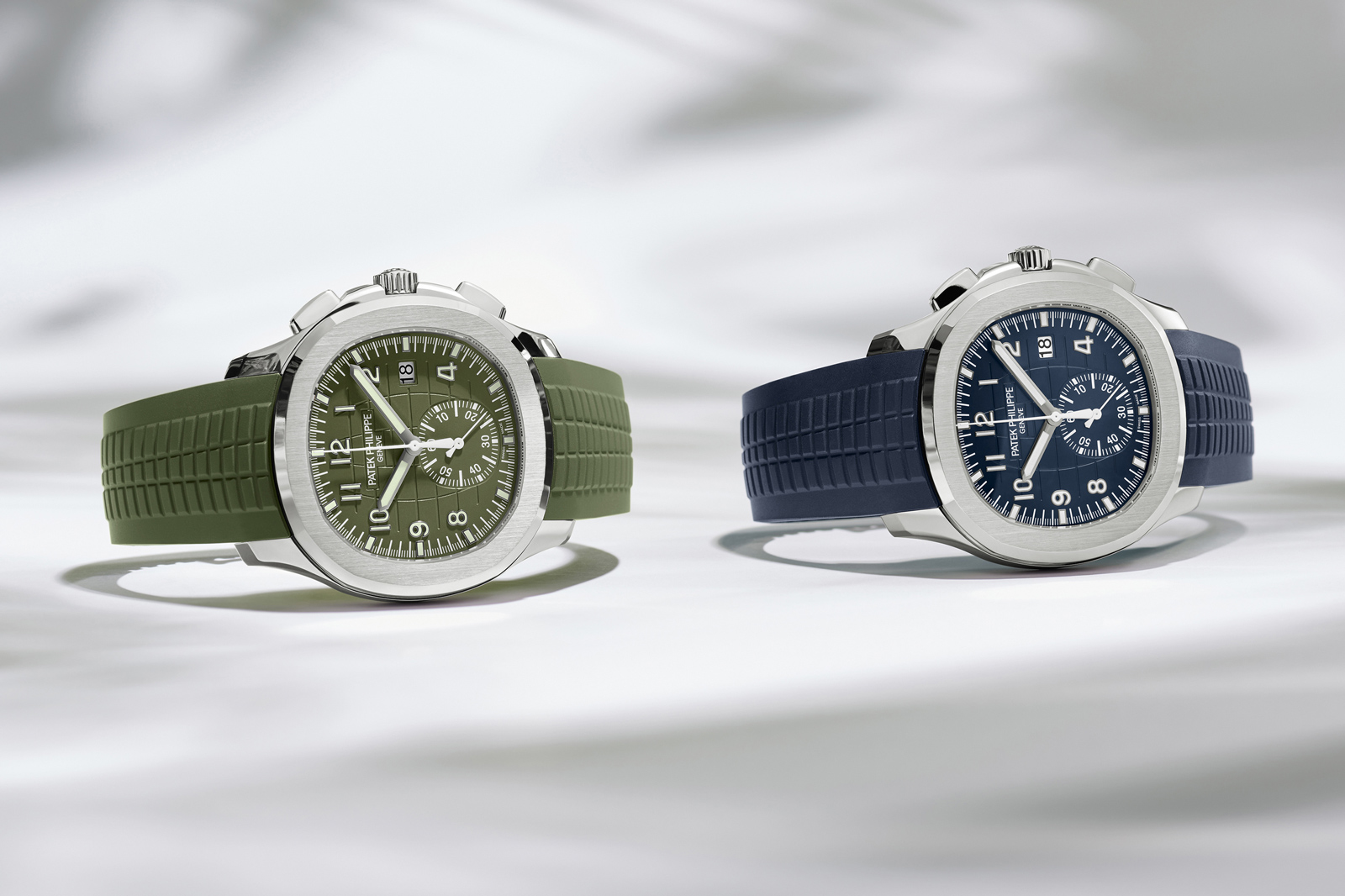 The new Aquanaut Chronograph iterates an existing model by drawing on elements from other Aquanauts. The midnight blue and khaki green dials are familiar because they are found on the time-only Aquanaut Ref. 5168G that’s also in white gold. Dial and case metal aside, the new chronographs are identical to the ref. 5968A of three years ago. 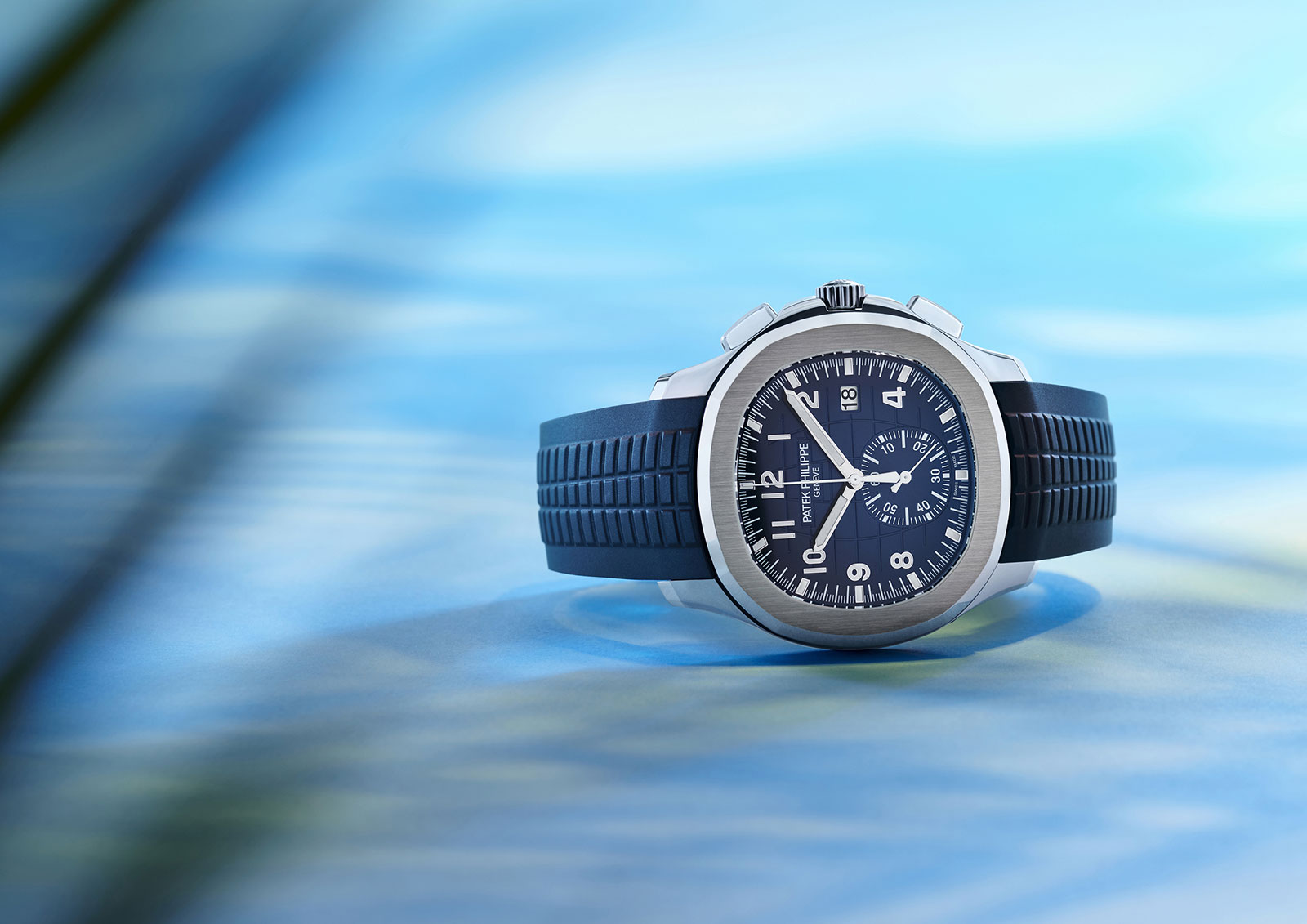 Although the colourways aren’t novel, they are good looking, conveying a contemporary aesthetic that complements the sporty nature of the Aquanaut Chronograph. The bright colours, juxtaposed against the case of white gold – traditionally a metal for formal occasions – exemplifies the modern concept of a sports watch where it’s more luxury than sport.

Between the two, my pick would be the midnight blue: its gradient finish is striking, and better reflects the elegance and historical style that are quintessentially Patek Philippe. 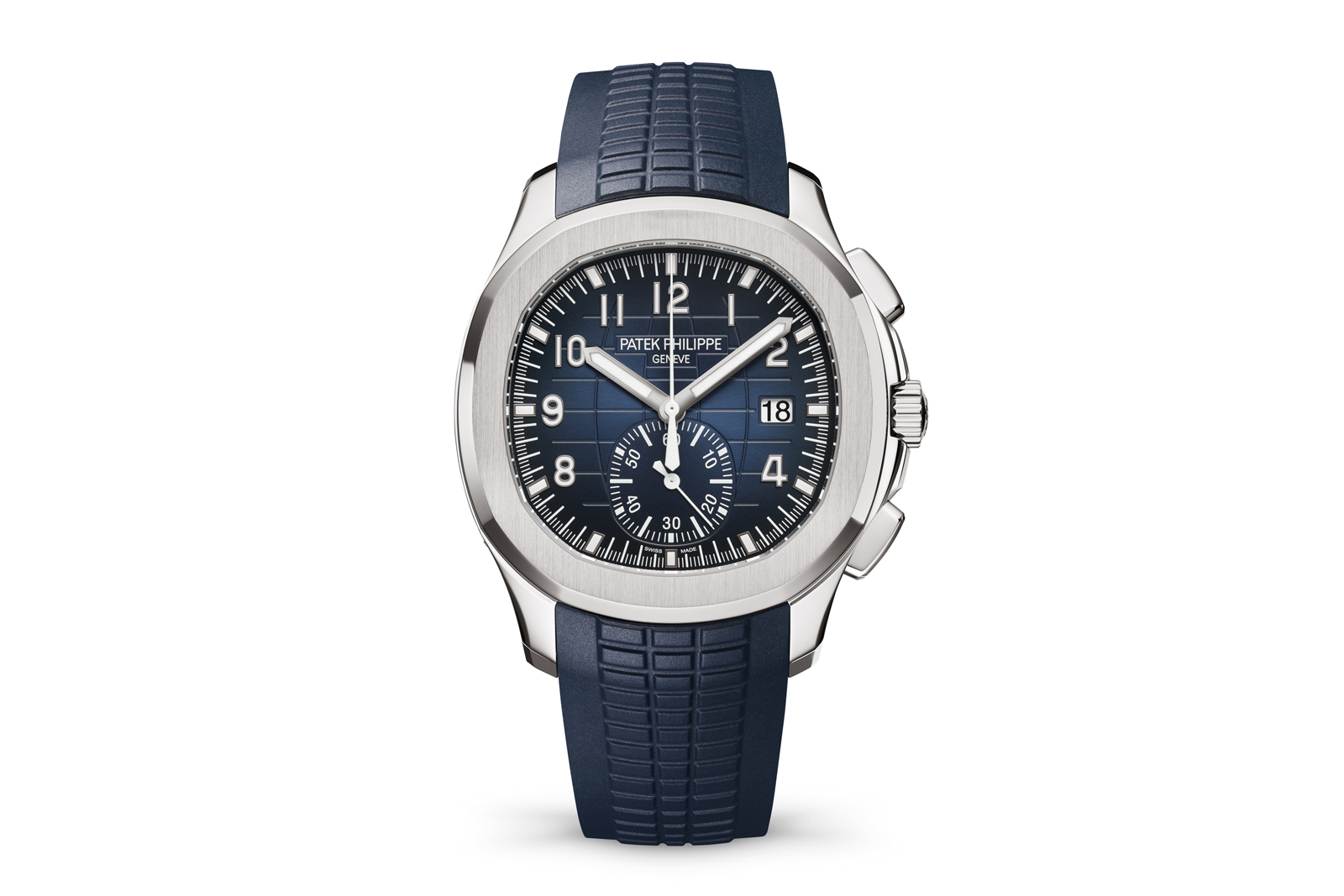 My pick out of the two

The retail price of the new chronograph is a hefty US$69,190, which is about 50% more than the steel version. Though steep, the increment is conventional for a precious metal case relative to steel.

But given the surging popularity of the Aquanaut – and all luxury-sports watches – the price of the ref. 5968G probably matters little; many will pay much, much more just to land one.

Introduced in 1997, the Aquanaut was conceived as an affordable, casual sports watch for younger clients. Naturally, the Aquanaut is no longer as accessible as it once was, but it retains the youthful style.

Though the colours are new, the new chronograph is very much like its steel counterpart. The dial features the stamped chequerboard motif that’s an Aquanaut trademark, paired with applied hour markers and hands of solid white gold. 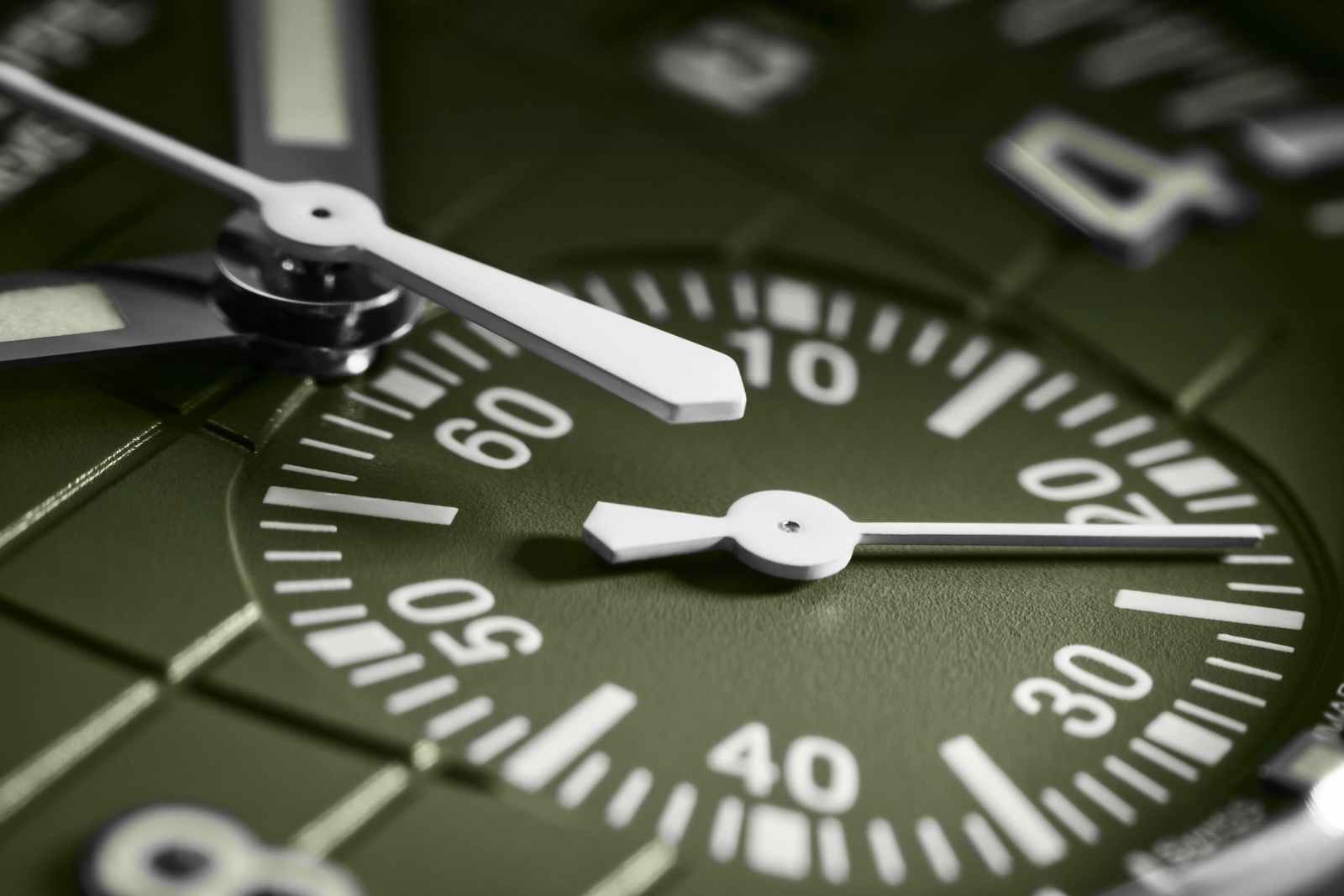 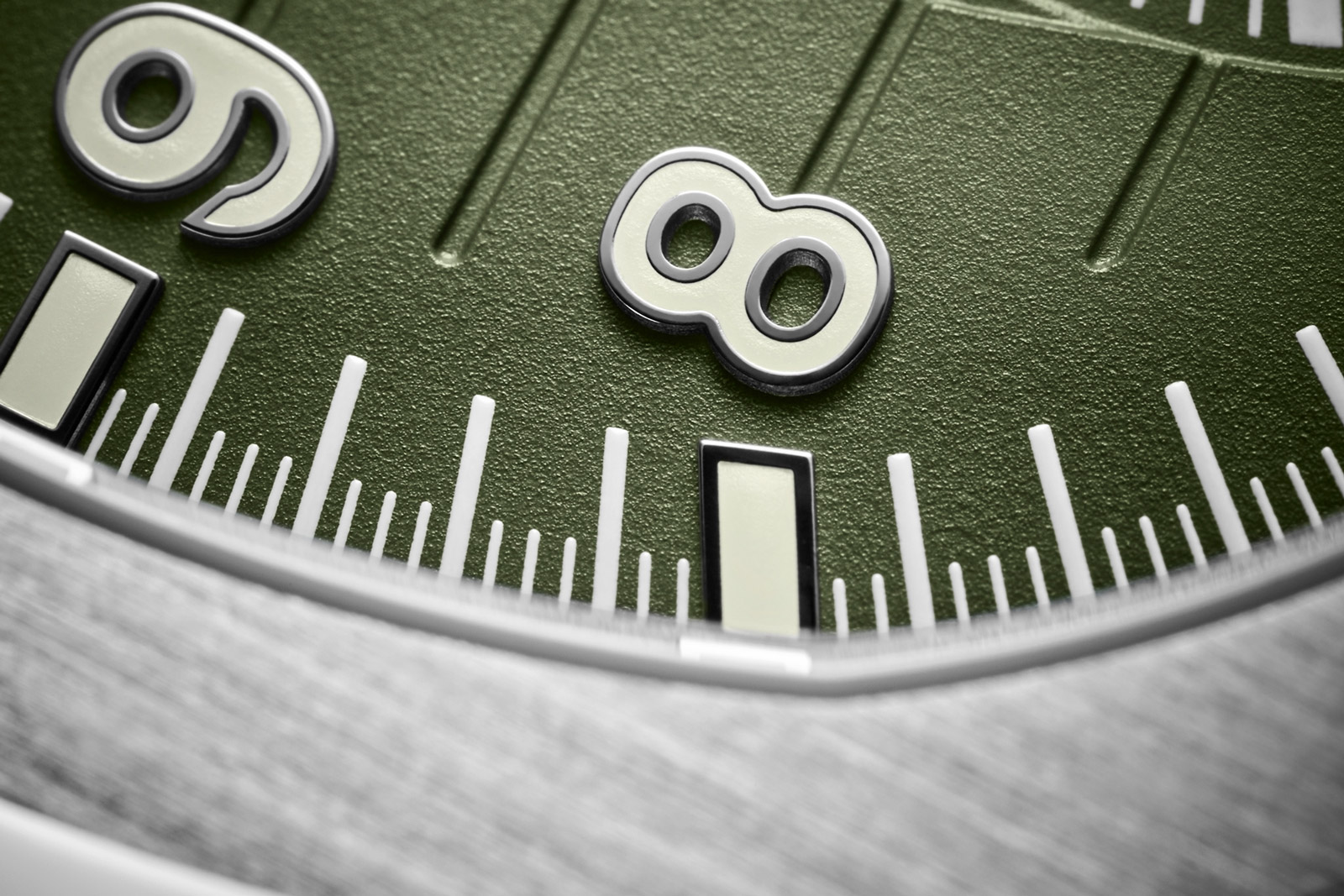 The hands and indices are also filled with Super-Luminova, but of different types on each dial: white on the midnight blue dial and slightly greenish on the khaki model. Both, however, glow pale green in the dark. 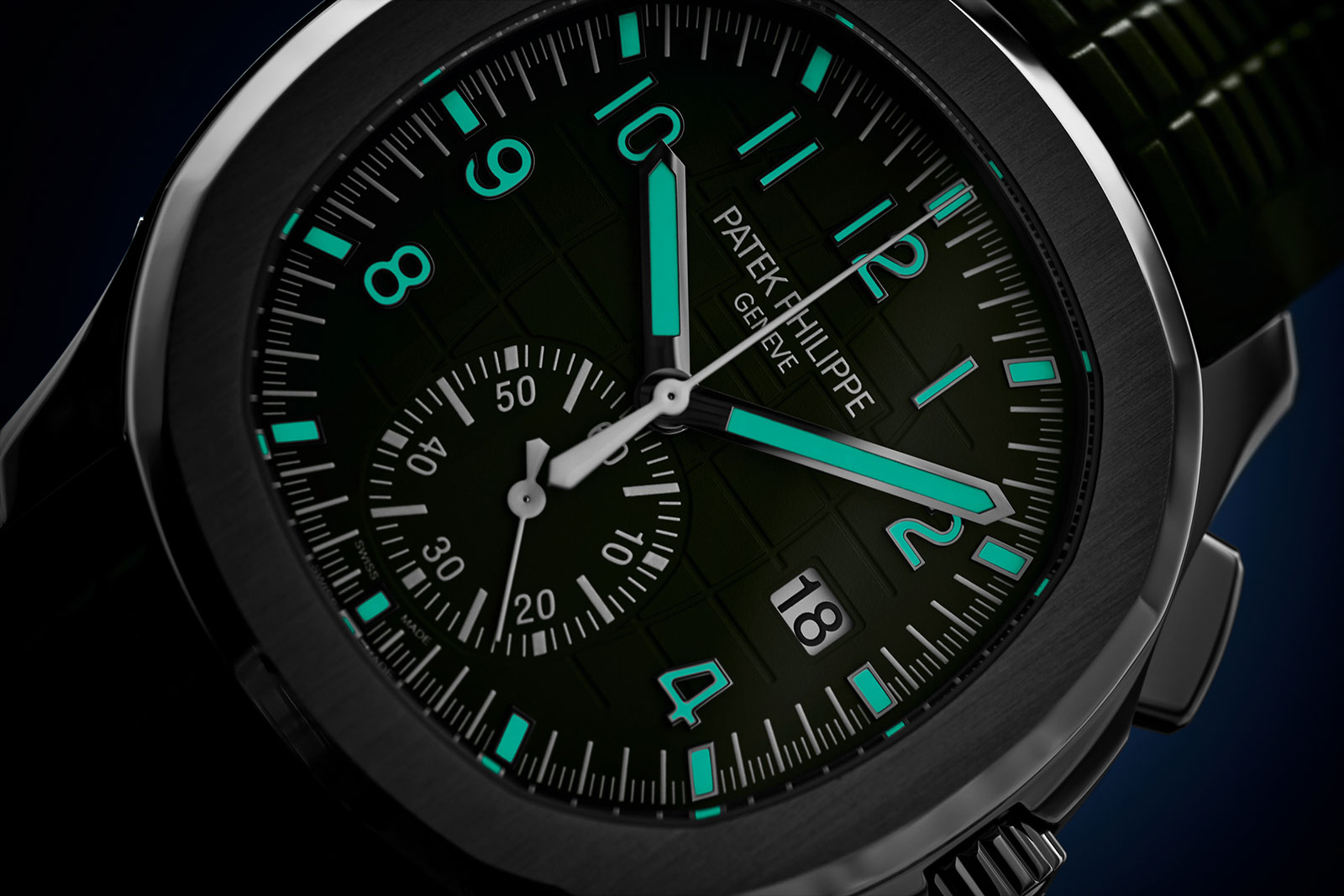 And like its steel sibling, the case is finely finished, with alternating satin-brushed and polished surfaces on the bezel, case ,and pushers. But because the ref. 5968G is in white gold, it will look a little bit more lustrous than the steel version. 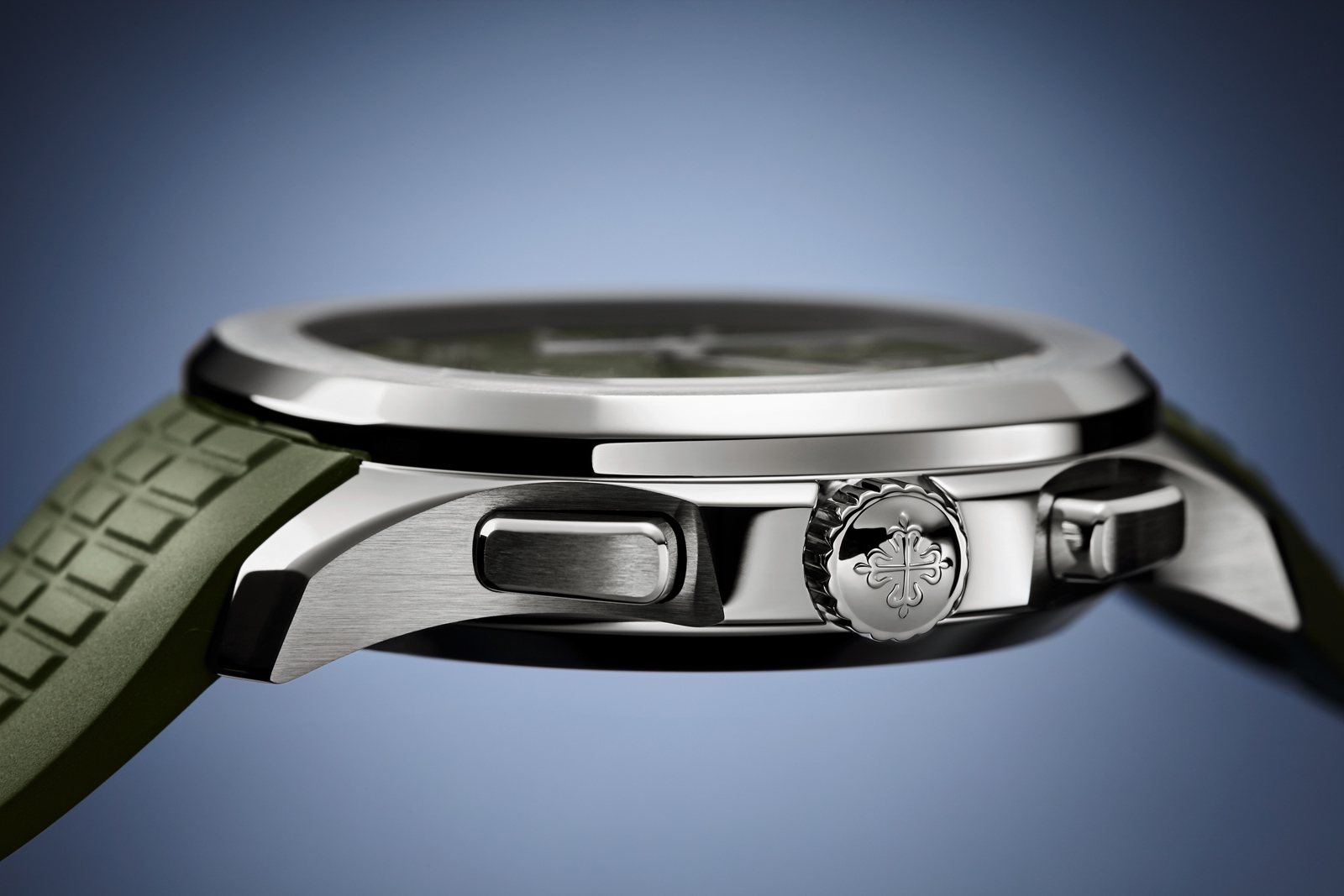 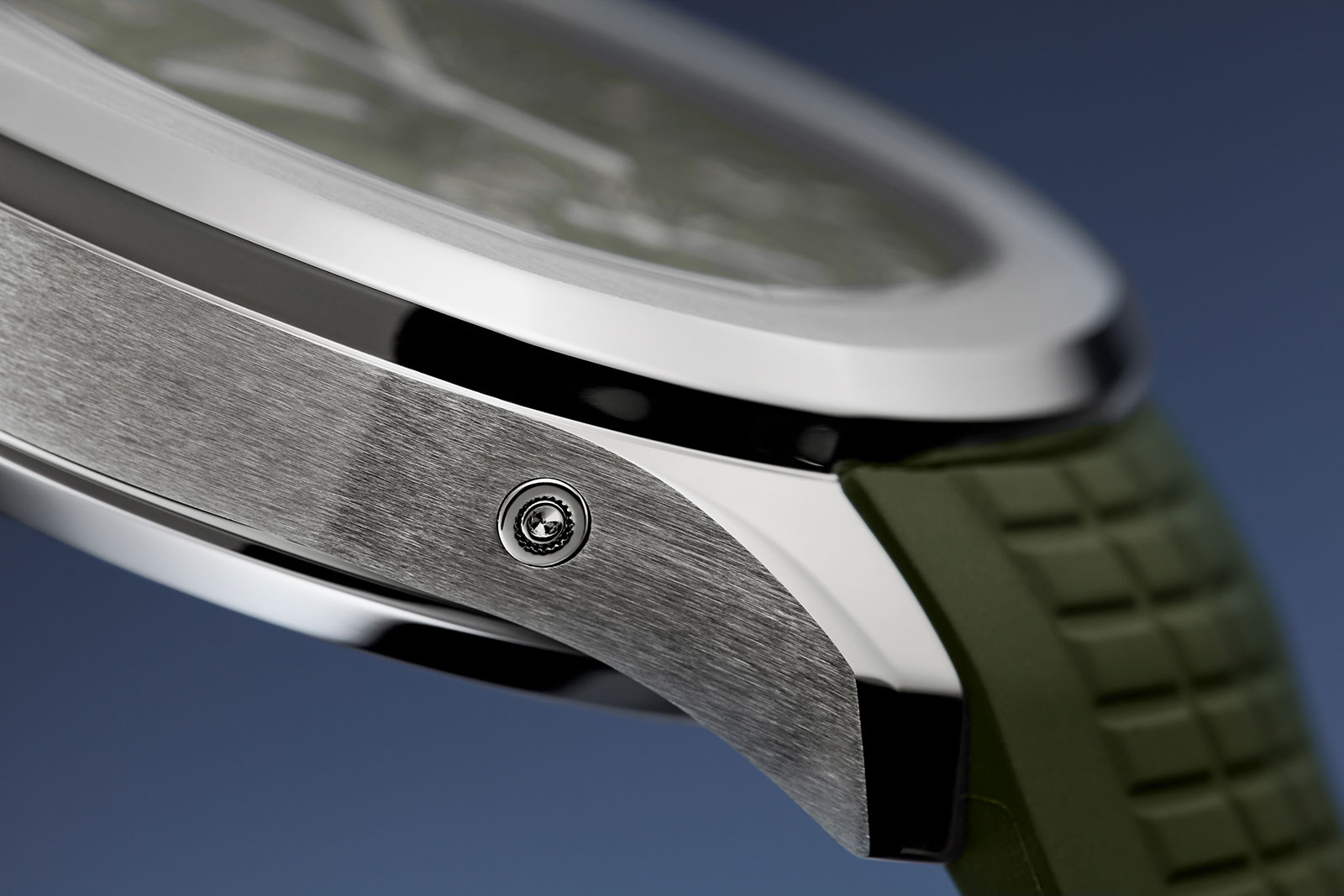 Unlike most chronographs that rely on multiple sub-dials to record the time, the ref. 5968G has a single 60-minute totaliser at six o’clock that has a rounded octagonal shape that echoes the Aquanaut bezel. 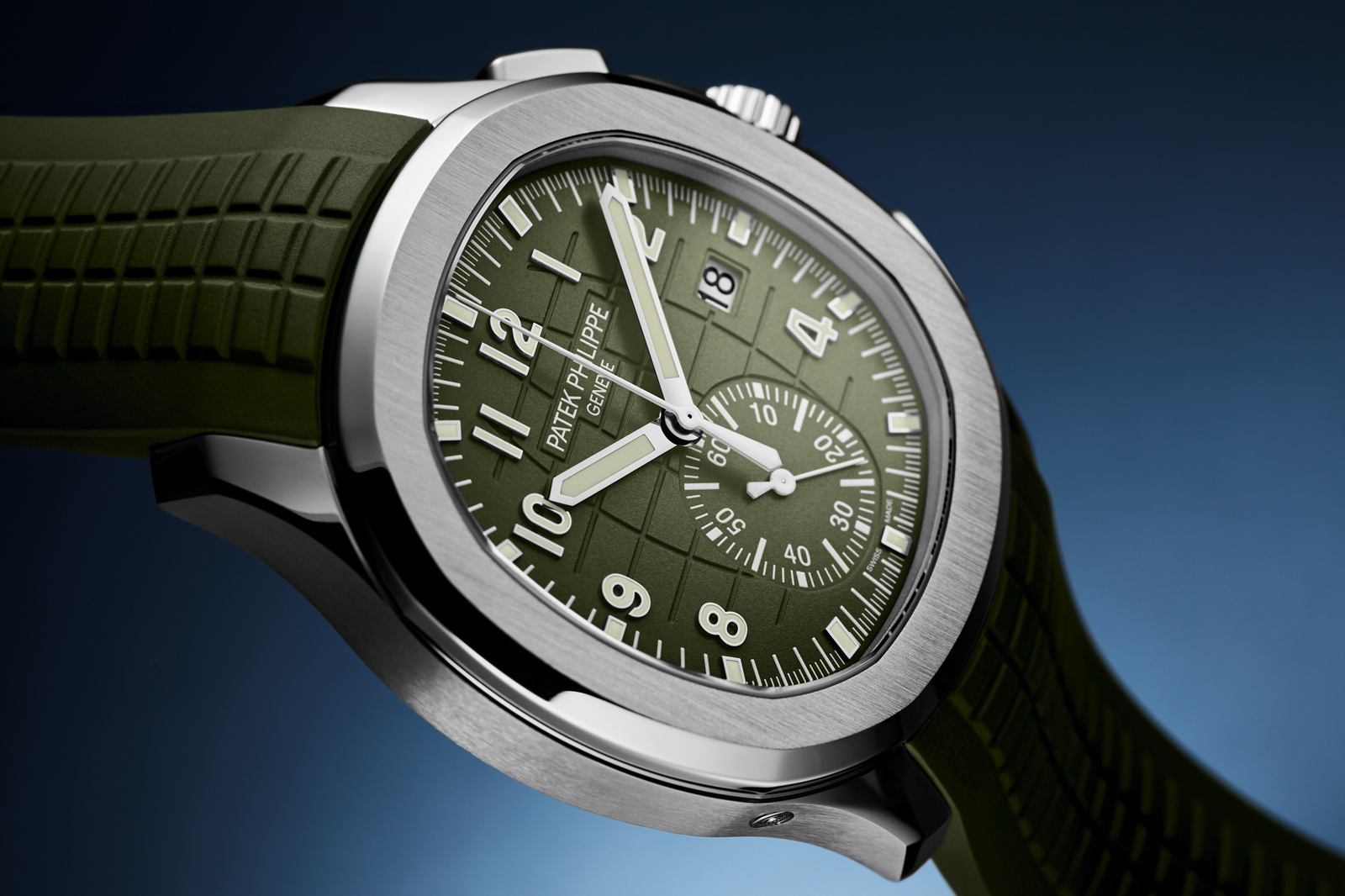 An automatic, flyback-chronograph movement equipped with both a column wheel and a vertical clutch, the CH 28-520 C is distinguished by its clarity of layout. Elapsed seconds are indicated by the central seconds hand, while the sub-dial at six is the 60-minute counter. Even the version of the movement with a 12-hour register as found in the ref. 5960 combine both the hour and minute totalisers on the same sub-dial at six o’clock.

Because the vertical clutch allows the chronograph to operate without diminishing the amplitude of the balance wheel – as would happen in a laterally-coupled chronograph – the chronograph can be kept running constantly, allowing the chronograph seconds hand to double up as a running seconds indicator.

In addition, the movement features Patek Philippe’s trademark innovations such as a Gyromax adjustable-mass balance fitted to a Spiromax silicon hairspring. 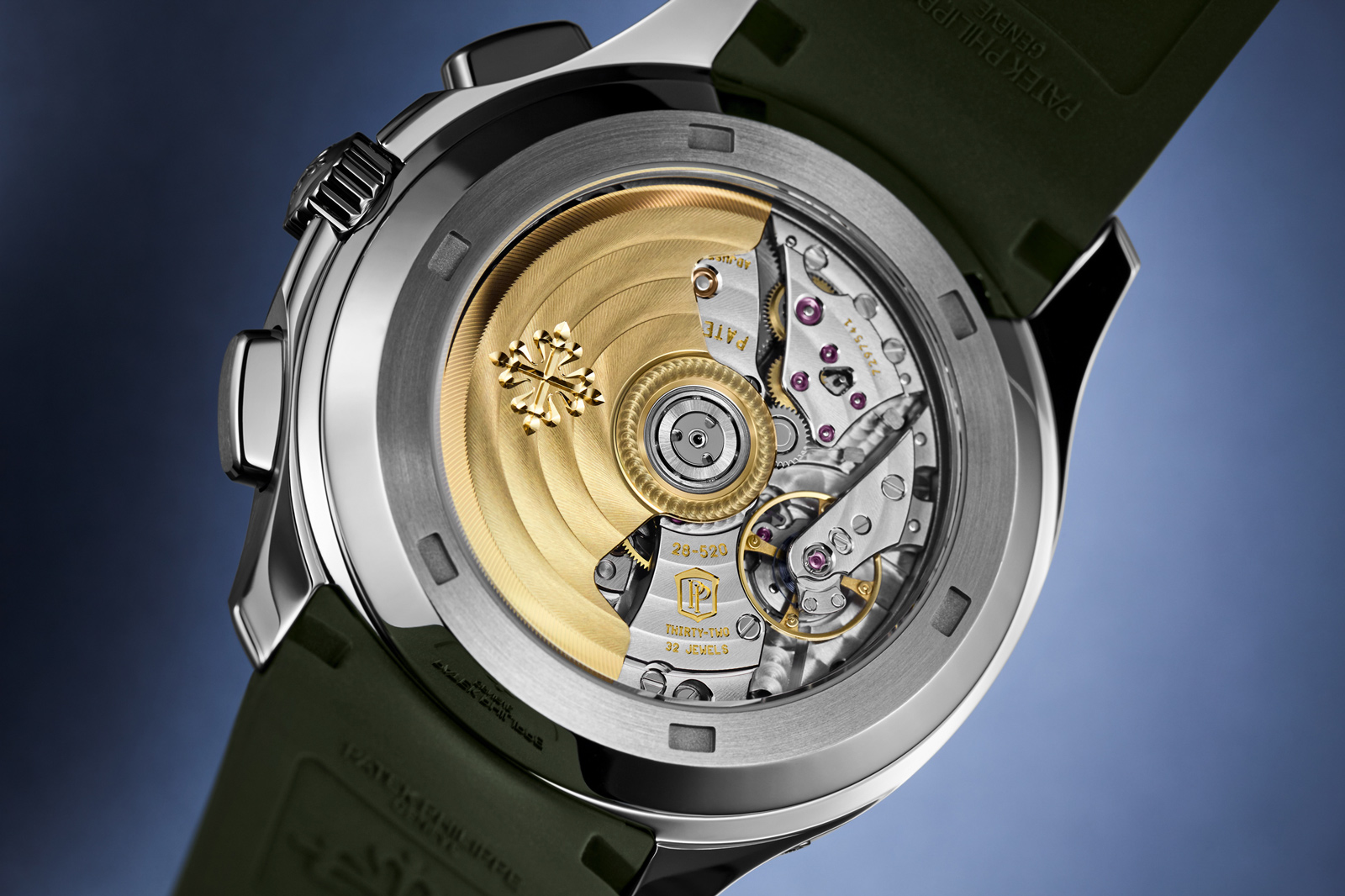 Each version of the ref. 5968G is fitted to a matching blue or green rubber strap with an 18k white gold folding buckle. Unlike the steel version, the white-gold models are only delivered with a single strap. 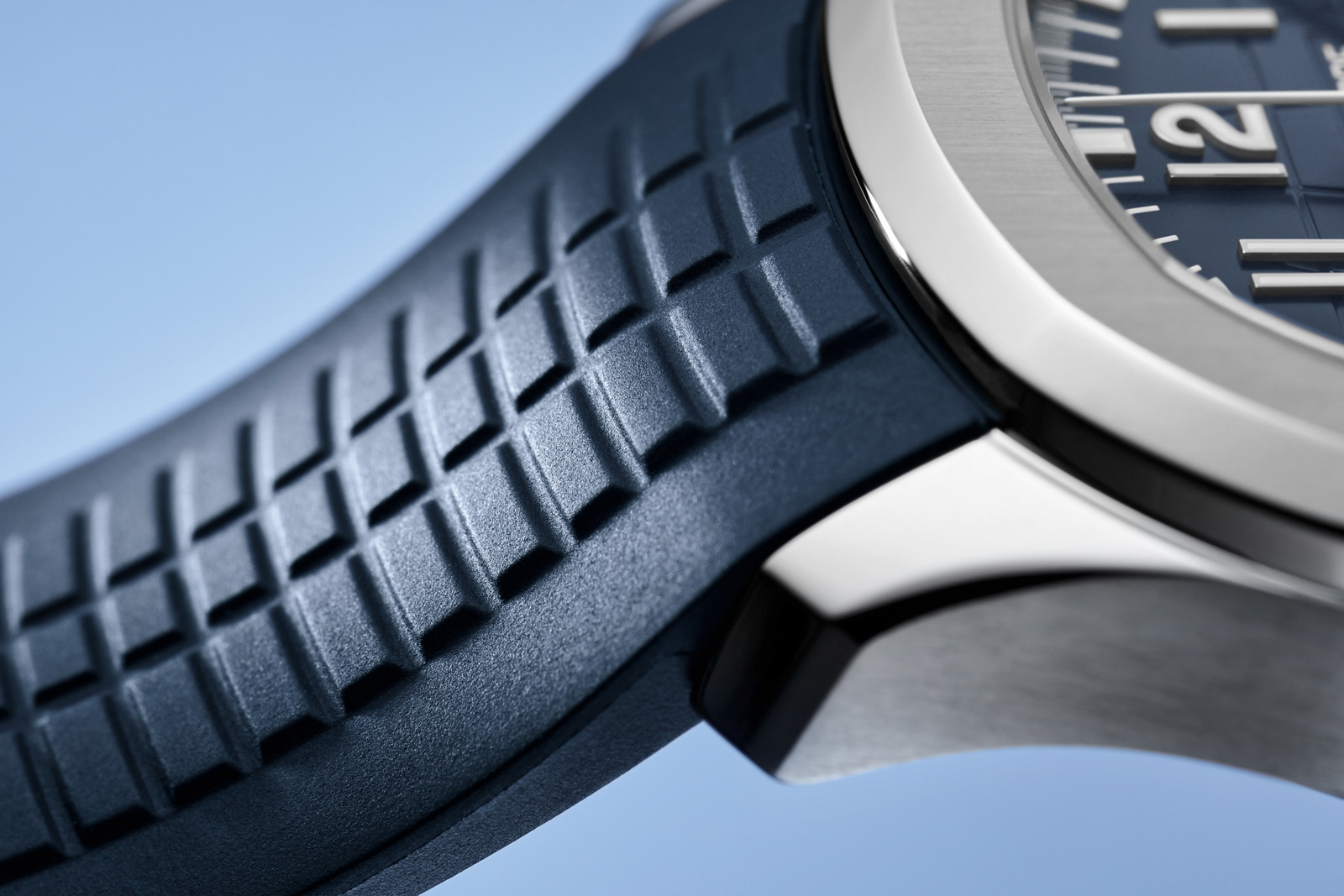 Availability: At both retailers and boutiques
Price: US$69,190, or 91,200 Singapore Dollars

Addition May 29, 2021: The ref. 5968G does not have a constant seconds hand, unlike what was implied in an earlier version of the article. However, chronograph seconds can function as a running seconds.