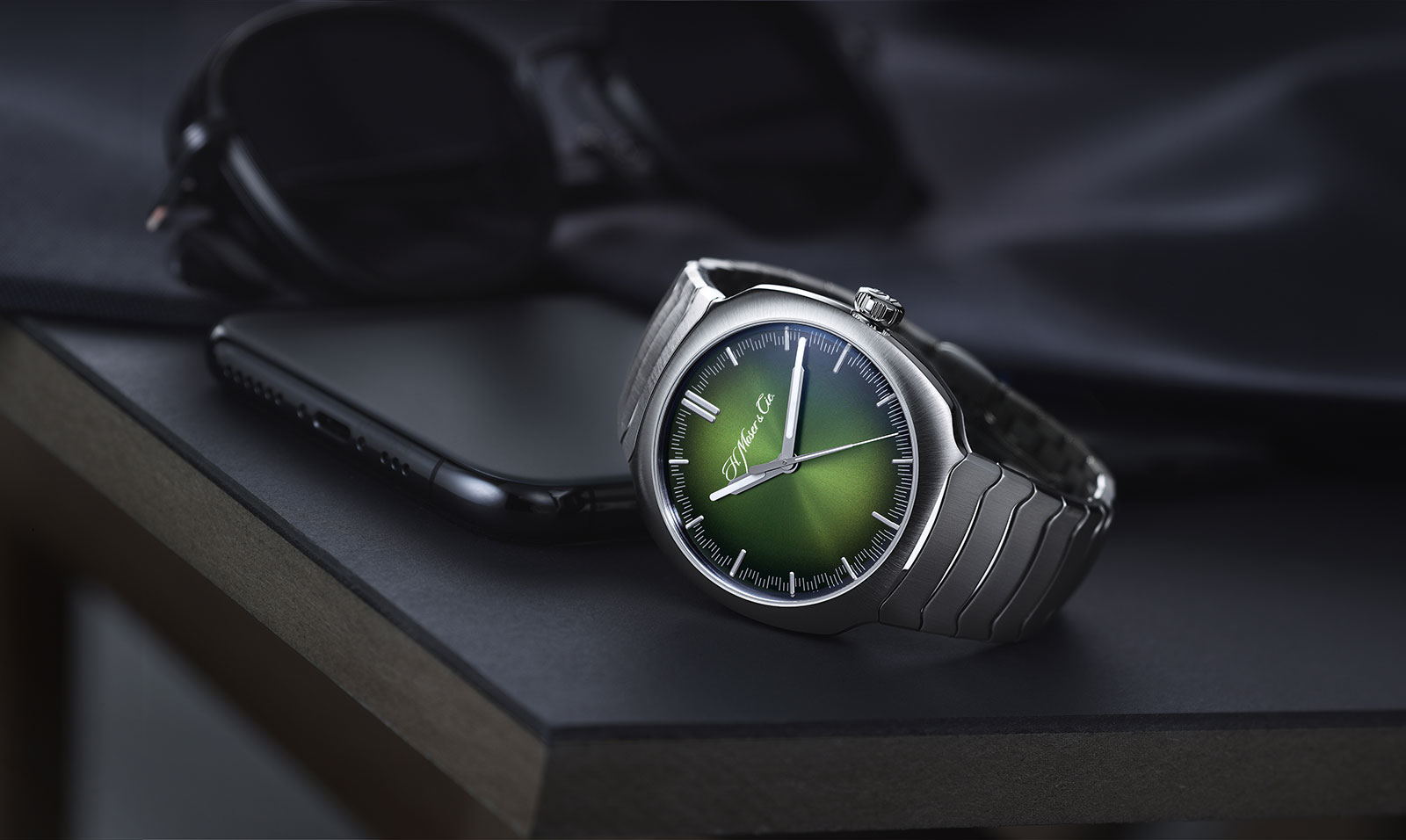 Launched earlier this year after much teasing, the Streamliner chronograph was the first sports watch – with an integrated bracelet – from H. Moser & Cie. The Streamliner design accomplished an unusual feature: bringing to the table a unique case and bracelet style that manages to look at home with other luxury-sports watches, while being distinctive enough to avoid being derivative.

With Moser chief executive Edouard Meylan having revealed additional Streamliner models were in the pipeline, the latest is not a surprise. The Steamliner Centre Second retains the same case and bracelet style of the chronograph, but as a more affordable, time-only watch. 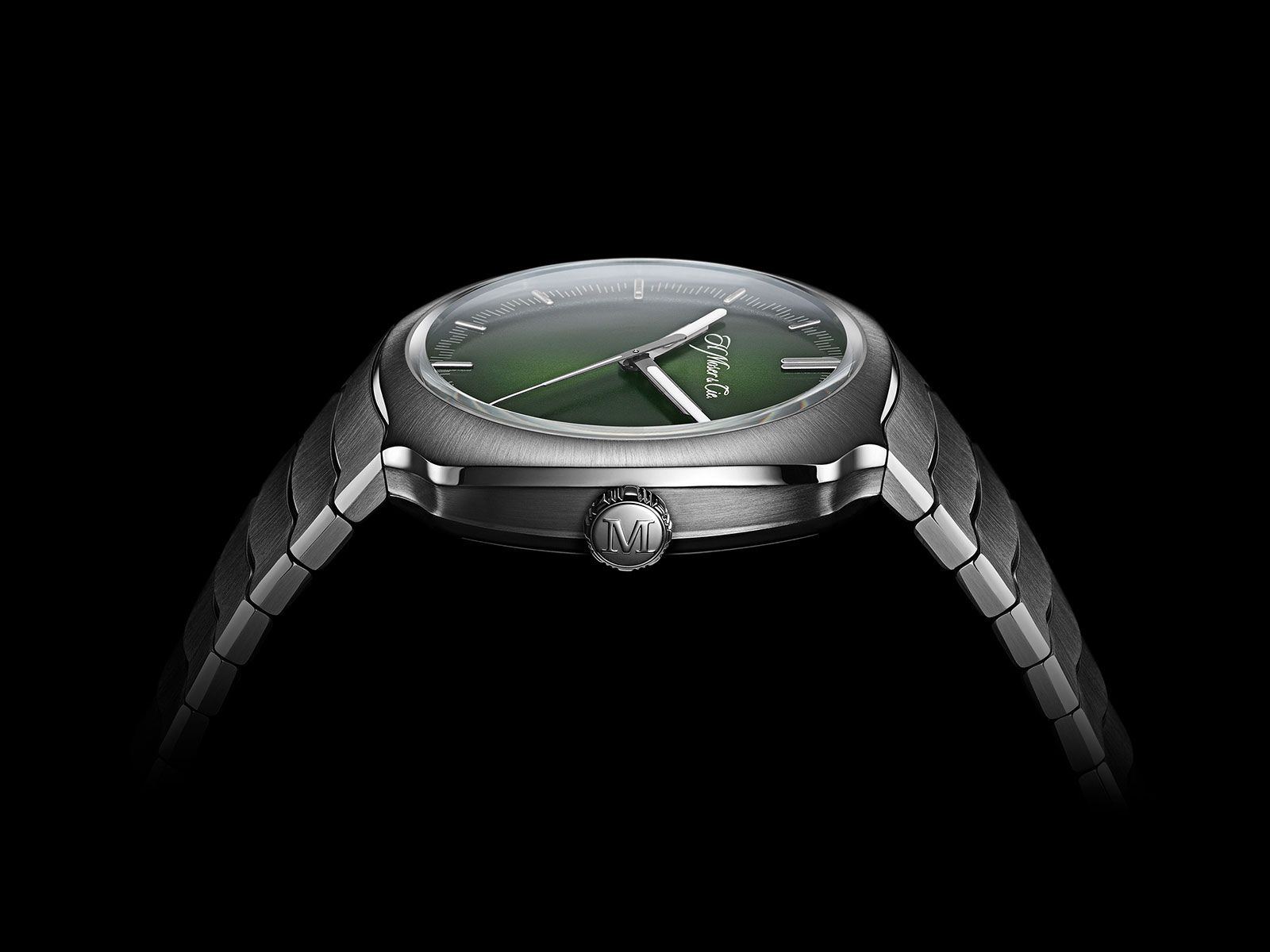 Slightly smaller than the chronograph, the time-only Streamliner is 40 mm wide and 11.8 mm high, so it is fairly classical in its proportions. That also means it probably wears slightly better than the chronograph, which was already quite compact despite its measurements. And the striking green fume dial doubtlessly gives the Streamliner Centre Second a good deal of wrist presence. 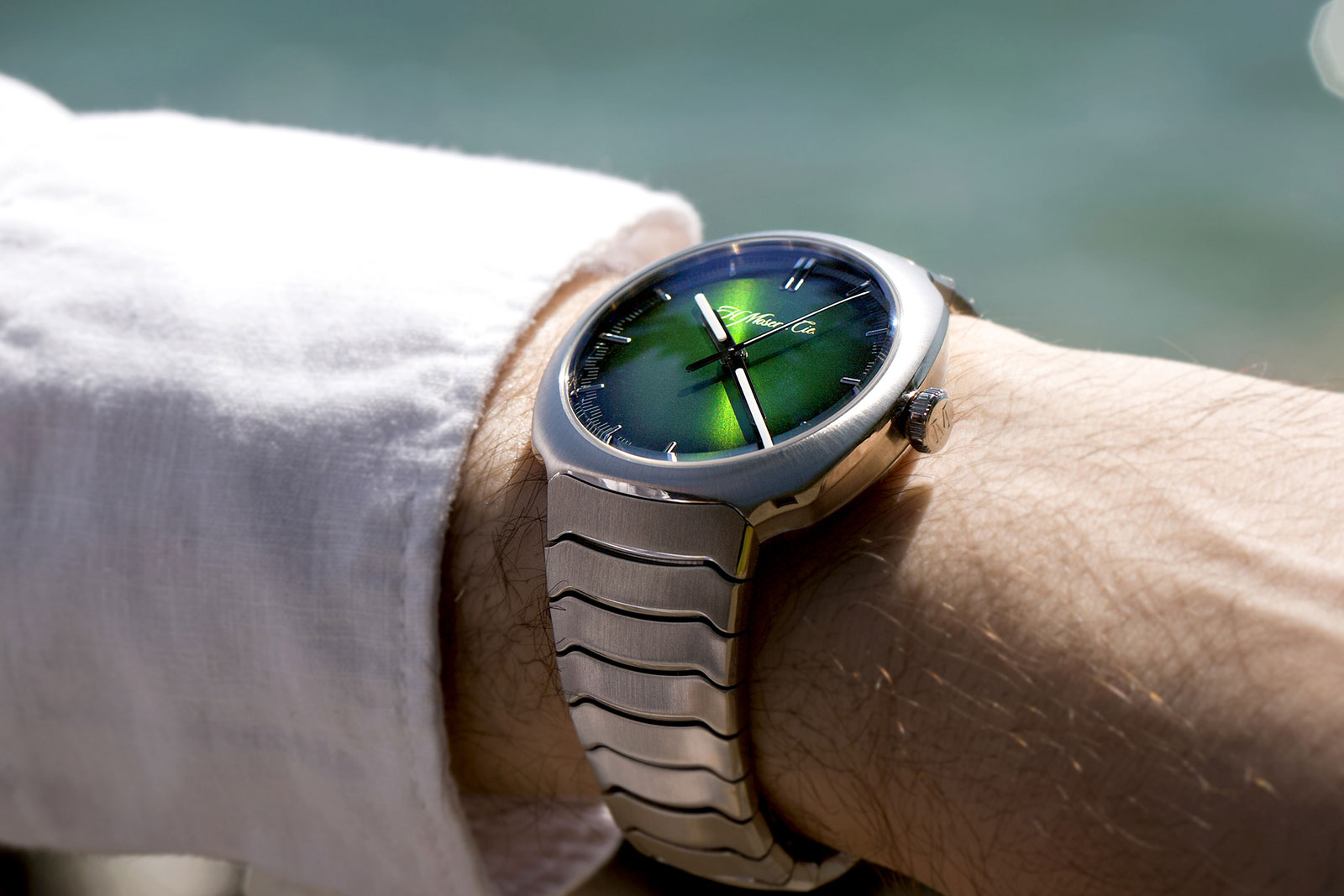 Priced at a little under US$22,000, the new watch is markedly more affordable, costing half as much as the chronograph. That said, the Streamliner Centre Second is pricey compared to Moser’s other steel watches. While the chronograph was well priced and compelling, mainly because it is powered by the ingenious Agenhor movement, the time-only Streamliner isn’t quite as strong a value proposition.

Having the same design as the Streamliner Chronograph means the new time-only model possesses the same strengths, but so does the weakness.

The case architecture is thoughtful and attractive; squarish but with fluid, curved edges. Notably, the case flank resembles a sandwich construction with raised top and bottom edges, yet it is actually one piece. 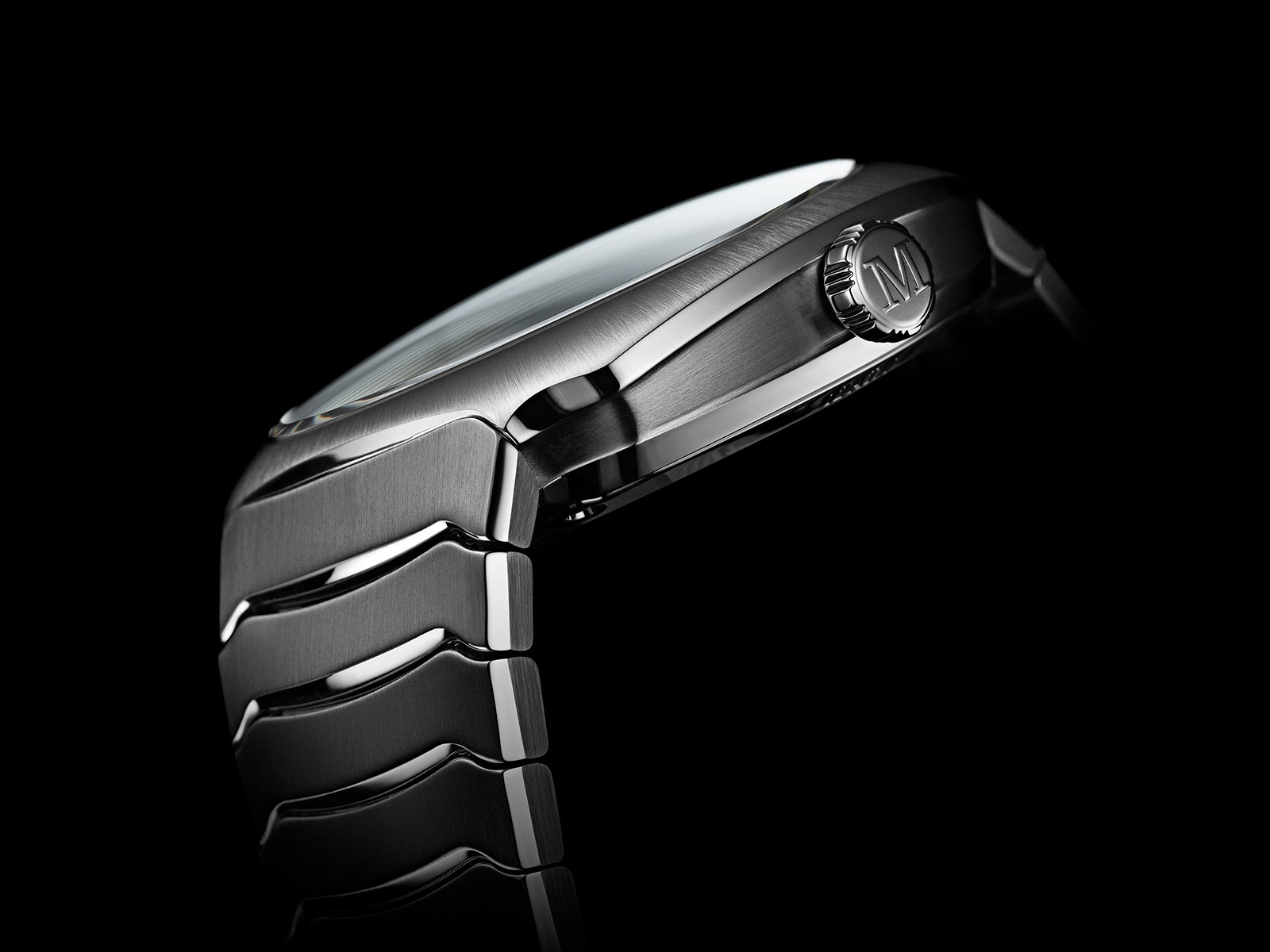 And it has the same bracelet, which is a crucial element of the design. Truly integrated both visually and mechanically, the bracelet flows into the case, which elevates the sporty feel of the watch.

At the same time, the new watch has the same hands, which have rounded tips that lack poise and don’t quite suit the overall style.

The dial is a fumè affair – graduated and smoked – that is now quintessential Moser. More unconventional is the colour, which stands out from the faddish blue dials found in almost all luxury-sports watch. The dial design also continues the minimalist look established by the chronograph, with applied hour indices and a “racing” style minute track. 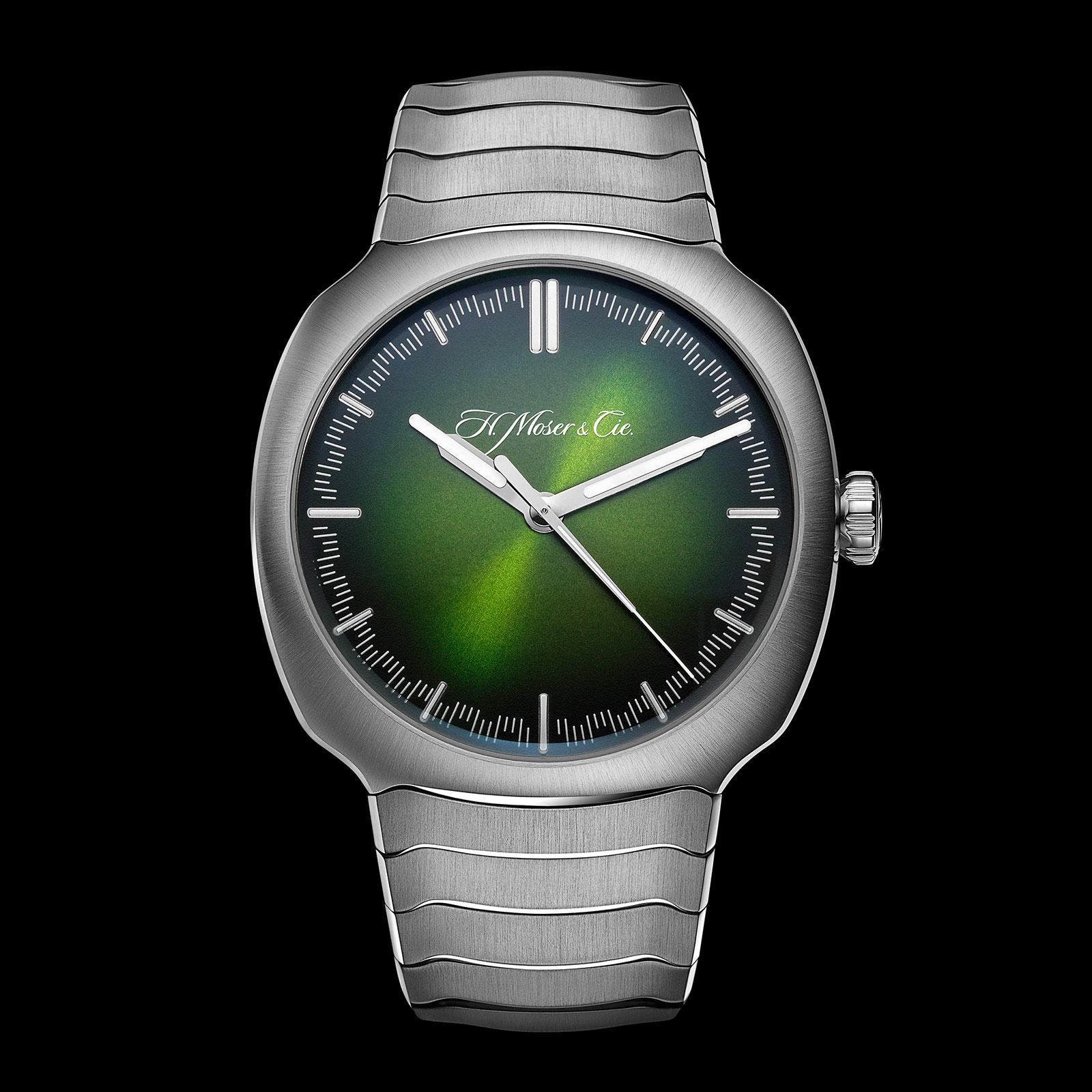 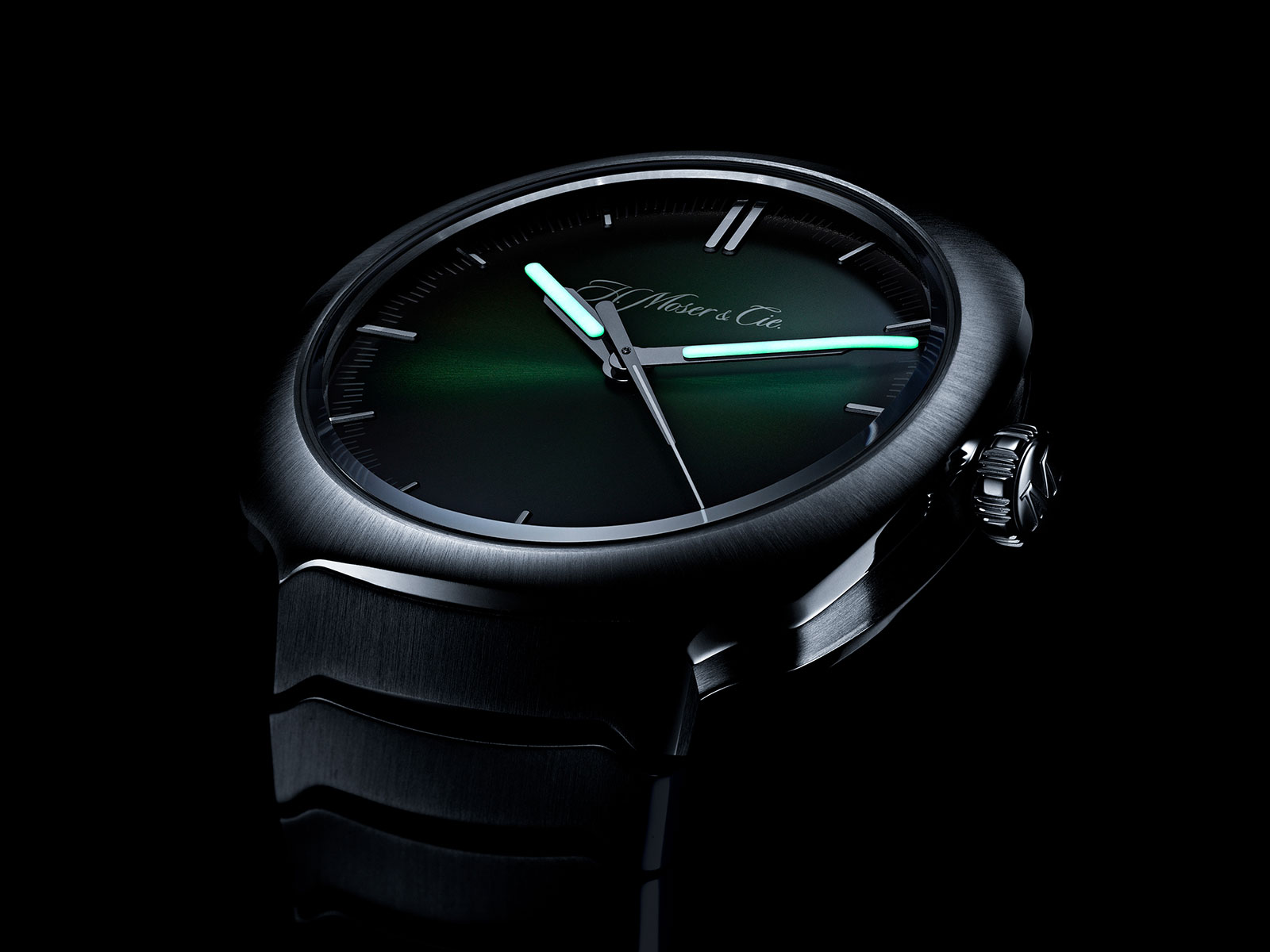 Visible through the back is the HMC 200 with a three-day power reserve. Dressed up with an 18k gold rotor, the calibre is a relatively new workhorse movement introduced in 2017 in the Endeavour and Pioneer Centre Seconds. While less elaborate than the brand’s higher-end movements, the HMC 200 incorporates several signature features like the double striping for the bridges and moustache-shaped balance bridge. 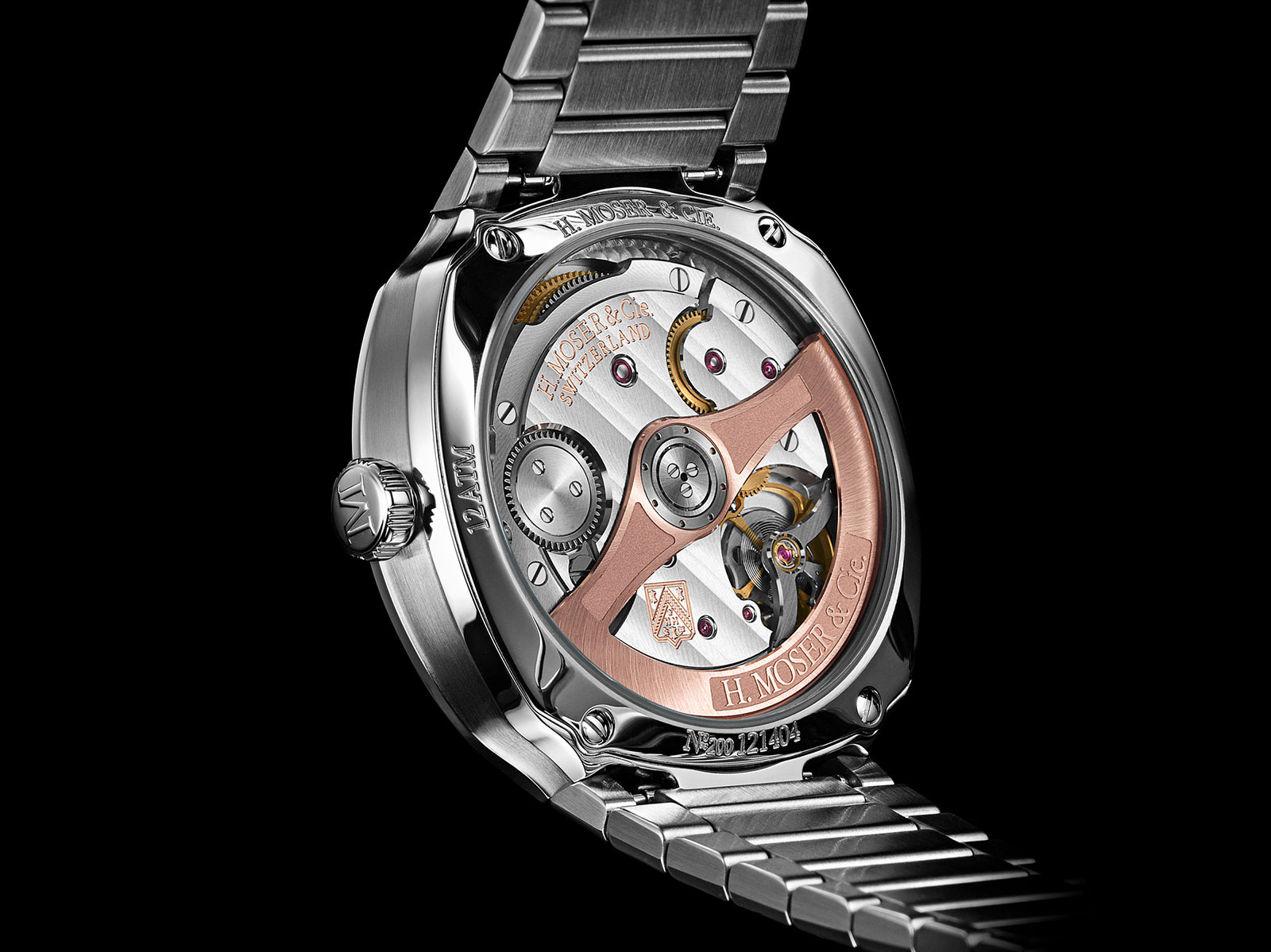