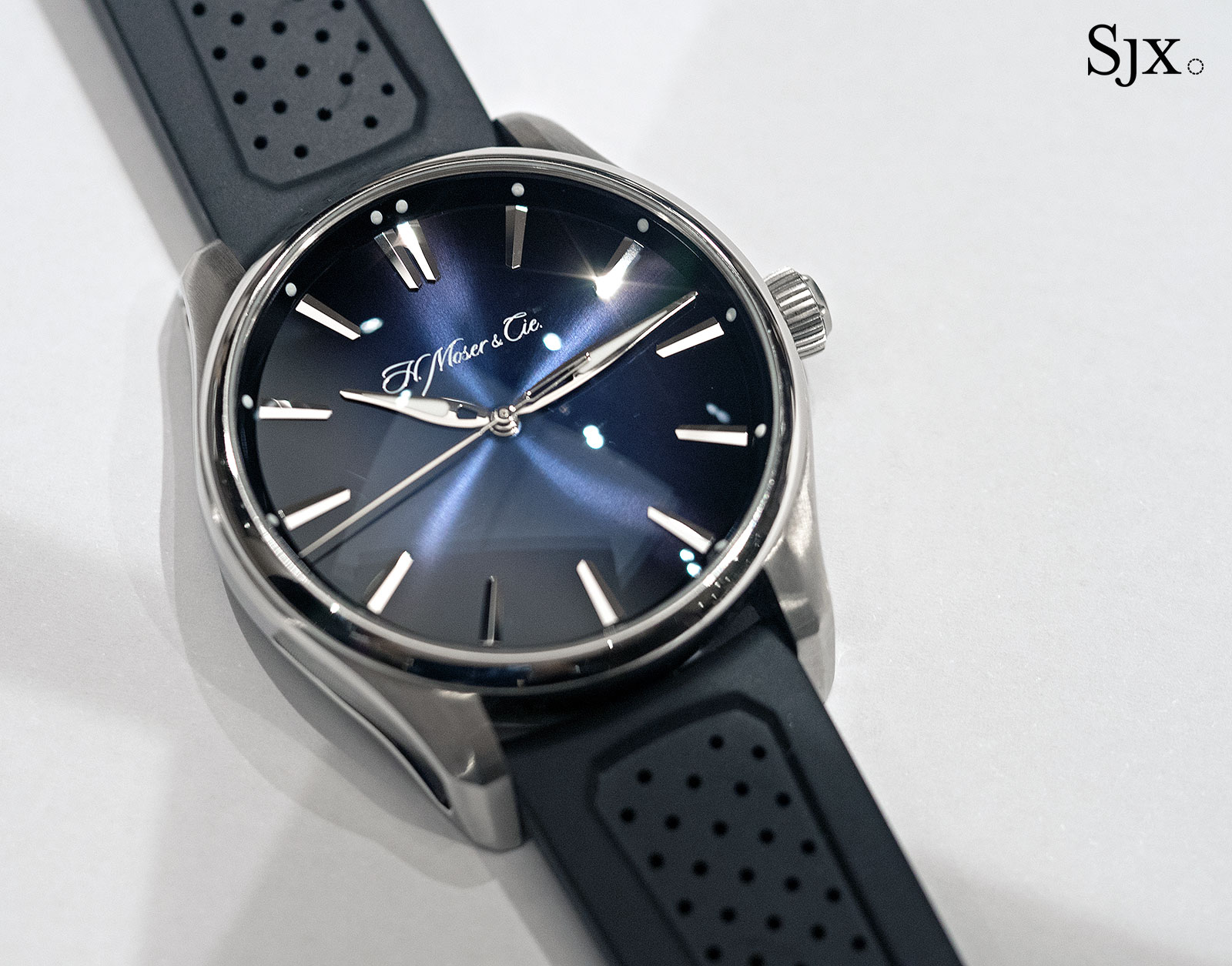 First introduced in 18k red gold, the Pioneer Centre Seconds Automatic is now more sensible in stainless steel. It’s an unusual product, being a sports watch from an independent watchmaker – Moser makes just 1500 watches a year – and powered by an in-house movement. Priced at just under US$12,000, the Pioneer Centre Seconds the most affordable watch in H. Moser & Cie.‘s line-up, condensed and streamlined but nonetheless conveys all the key qualities of the brand – and boasts a full-spec, in-house automatic movement.

The watch case is the most striking element of the Pioneer (but note that the watch pictured here is a well-worn prototype that’s been on Moser CEO Edouard Meylan’s wrist for several weeks). Rated to 120m and equipped with a screw-down crown, the case is large and aggressively styled, with a slight retro feel, seeming like a quirky 1970s vision of a space-age watch.

Though the 42.8mm case is bigger than the average Moser watch, it’s suited for its purpose with a good, solid feel in hand. While the lugs have an angular, bevelled form, the case sides are a variation of the signature concave case flanks found on the Endeavour models, but here more pronounced and finished with a fluted surface that resemble air intakes. The lugs have well defined, but not razor sharp, facets, but it doesn’t detract from the overall look. And while entirely functional, the crown could be bigger to suit the case. The dial finish is a graduated, metallic blue, the fumé finish that is now synonymous H. Moser & Cie. Just like the watch case, the dial design reinterprets the usual Moser look. So it’s still batons and leaf hands, but the batons are larger and almost arrowheads, while the hands are super-sized, skeletonised and filled with Super-Luminova.

To match the hands, Super-Luminova dots circle the dial, but are painted on the dial flange instead of the dial itself – a shrewd decision that gives the dial depth and brings to mind the radium dots on the dials of mid-20th century sports watches. The movement inside is the HMC 200, which is the brand’s workhorse in-house automatic. It’s designed to be robust enough to accommodate other complications, explaining the longish power reserve of three-days and slow beat balance that runs at 18,000bph. In fact, chief executive Meylan alluded to a chronograph based on this calibre, during an interview last year. Though it lacks the fancy features that are standard in more expensive Moser watches – the rotor here is tungsten instead of 18k gold – the HMC 200 in the steel Pioneer still possesses all the recognisable Moser features, including the moustache-shaped balance bridge.

Another Moser trademark are the alternating wide and narrow Geneva stripes, which are machine-applied still catch the light attractively. Much of the rest of the movement finishing exhibits a similar quality, being mechanically executed but visually appealing. The wide bevel that’s done with a diamond-tipped cutter Notably, the HMC 200 is the first to utilise the newly developed balance wheel featuring four adjustable gold masses. While earlier movements relied on the traditional and similarly effective adjustment screws, Moser turned to weights for the new balance wheel in order to maximise its diameter. That in turn increases the inertia of the balance wheel, a helpful feature for slow-beat calibres as it increases timekeeping stability. The Pioneer Centre Seconds Automatic is delivered on a rubber strap with a pin buckle that echoes the case design. According to Edouard Meylan, a steel bracelet in a similar style is in the works.