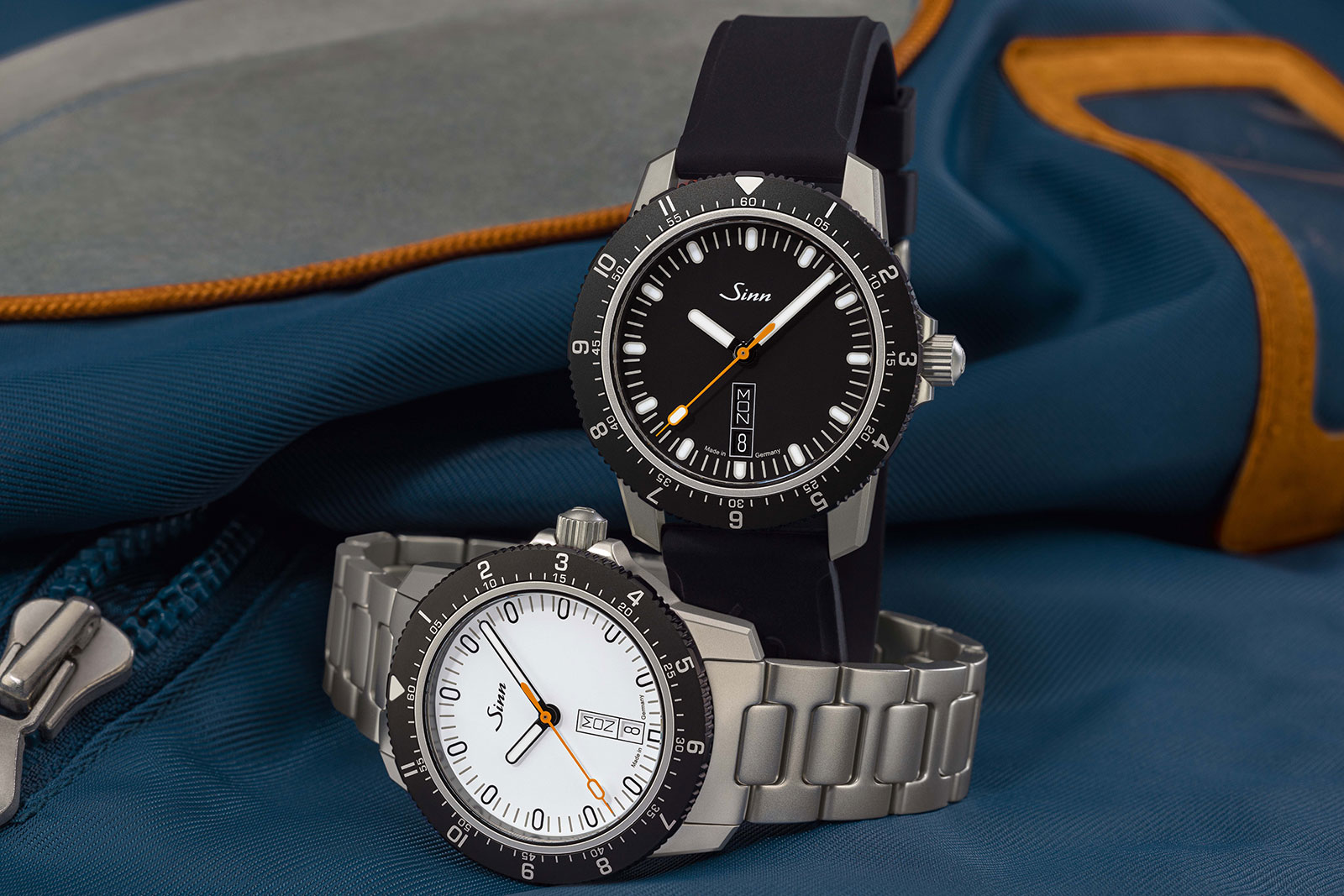 Alongside the unusual R500 “bullhead” chronograph, Sinn’s new debuts for the year include a pair of entry-level “tool” watches. The Series 105 is comprised of two models – 105 St Sa and 105 St Sa UTC – that are reminiscent of classic pilot’s watches, but in a clean, modern style with a dial populated by geometric shapes.

Both are dual time zone watches, but executed differently. The 105 St Sa UTC is similar to a traditional GMT watch, having an additional 24-hour hand as well as a 24-hour rotating bezel. More unusual is the base model 105 St Sa, which has a bezel with two separate scales – 12-hour and 60-minute markings – that allows for measuring short elapsed times as well as tracking a second time zone. 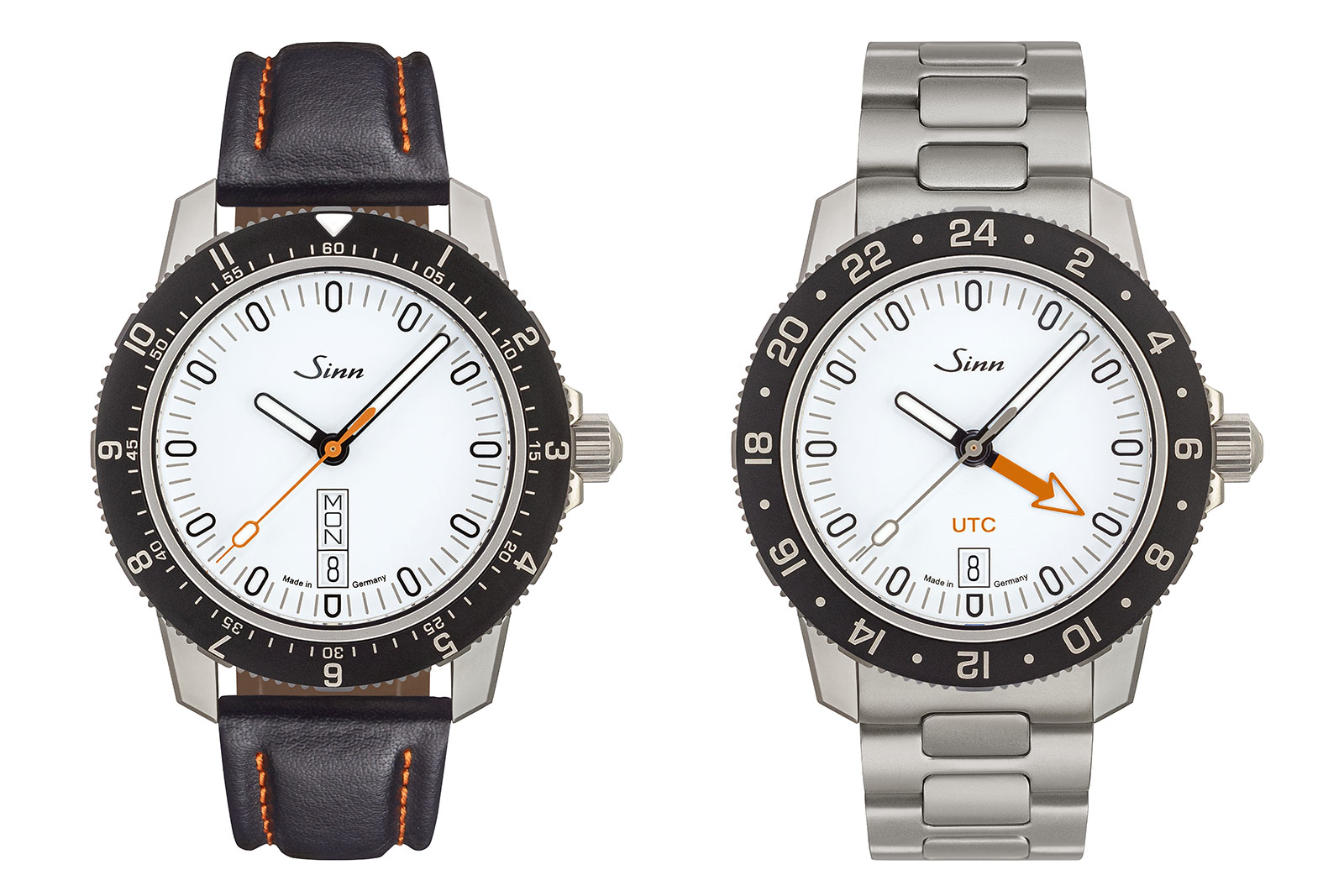 Starting at €1,350 for the base model, and rising to €1,790 for the UTC on a steel bracelet, the 105 is a value buy that manages to differentiate itself from the numerous “tool” watches in the same price segment. It has roots in Sinn’s Pilot Watch 104 – the brand’s long-standing, entry-level aviator’s watch – but the 105 is different enough to make it stand out.

To start with, the dial design is simple but smart. The base model, for instance, manages to incorporate a day and date display in a symmetrical manner, preserving both legibility and balance.

At the same time, the colours are unusual, especially the white and orange combination that is just as functional but avoids the all-black look of a traditional pilot’s watch. Less obvious are the quirky hour markers – elongated rectangles with rounded edges that are uncommon and refreshing.

And the case finish also differs from the 104: the 105 case is entirely bead-blasted that suits its utilitarian identity well, while the 104 has a polished case. 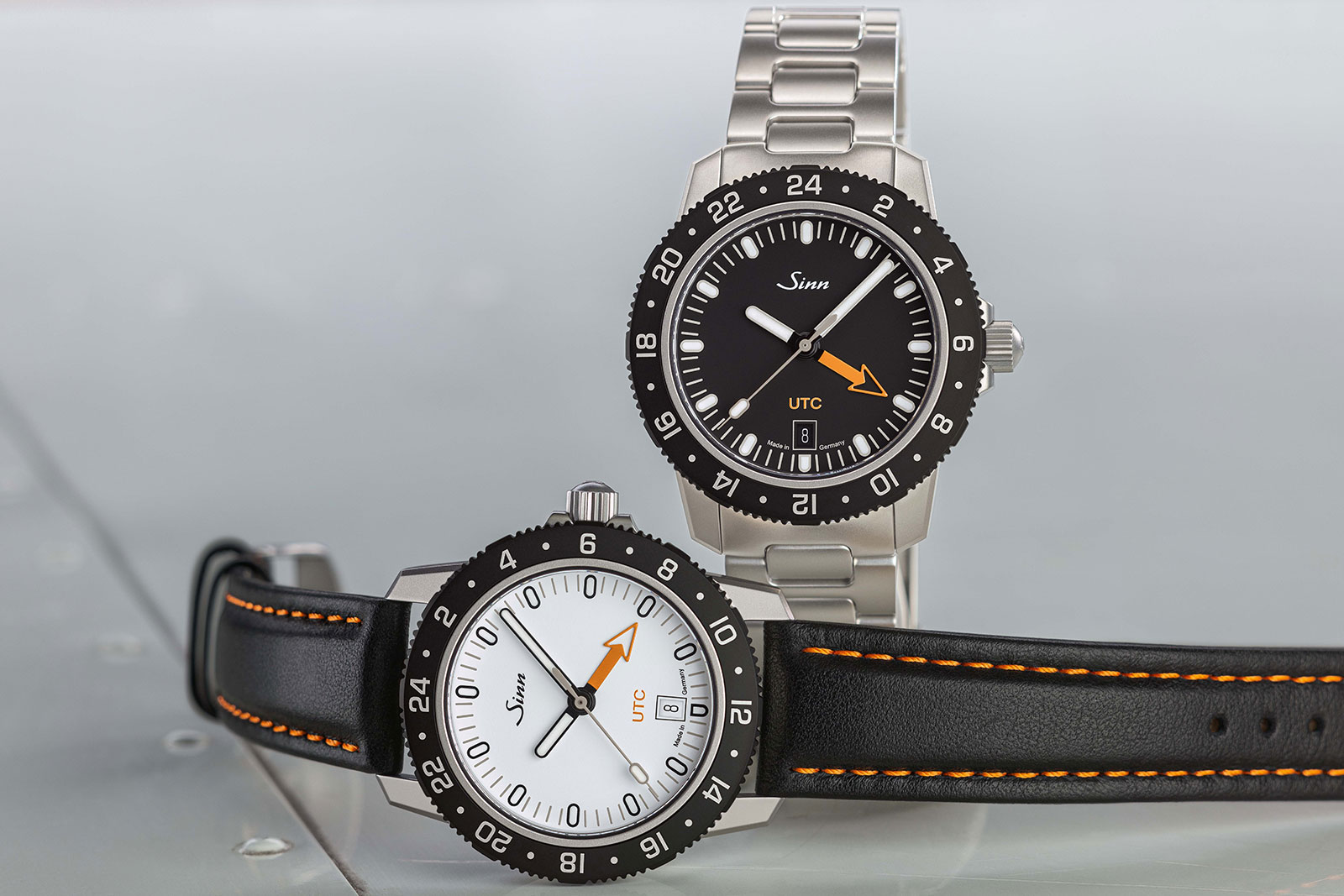 The UTC in black and white

As is typical for Sinn, the 105 is built to be tough. While many similar watches feature plastic or aluminium bezels, the 105 has a steel bezel that’s undergone two surface treatments. First the brand’s proprietary surface hardening process known as Tegiment, which is followed by a ceramic-based hard coating. The result is a scratch-resistant bezel, thanks to the fact that the hardness of the underlying metal and hard coating are similar, avoiding delamination of the coating, which can happen when the softer metal below deforms more than the coating.

Functionality is also taken care of, especially with the 105 St Sa, which does the job with minimum fuss. Its twin-scale bezel is smart: the count-up 60-minute scale can be used to time short periods, while the outer 12-hour scale can be used for a second time zone when aligned with the hour hand. 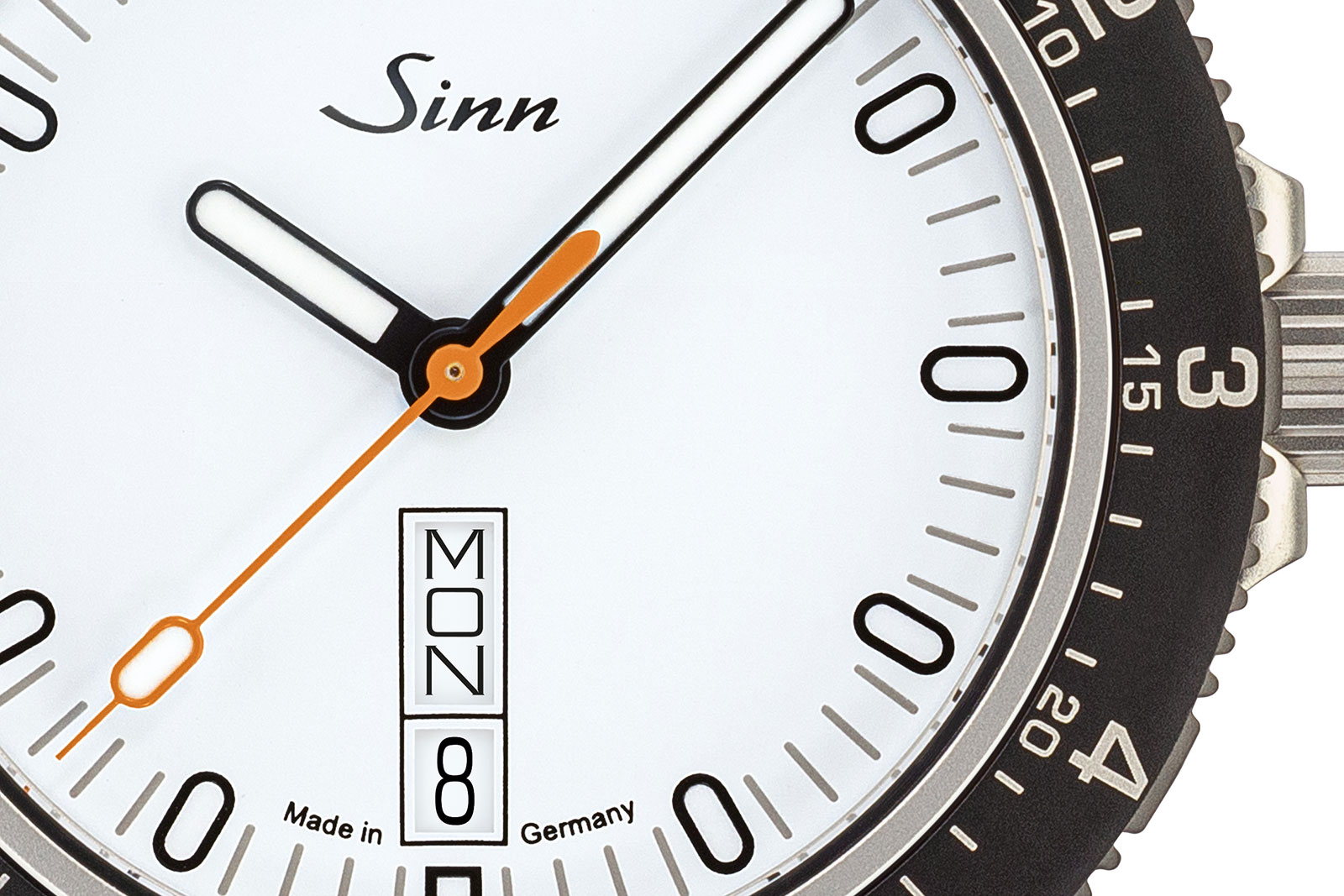 A reason for the affordable price tag are the cost-efficient Sellita movements found in both models, although the movements are still modestly decorated with blued screws and gilded rotor, as well as regulated in-house by Sinn.

Its UTC counterpart, on the other hand is equipped with a clone of the ETA 2892, the cal. SW330-1. While fully capable of showing two time zones, it’s worth noting the movement is not a bona-fide GMT movement. Due to its add-on construction, the 12-hour hand for local time cannot be set independently. Instead, the 24-hour hand has to be adjusted in one-hour increments, making it slightly more cumbersome to set two time zones. 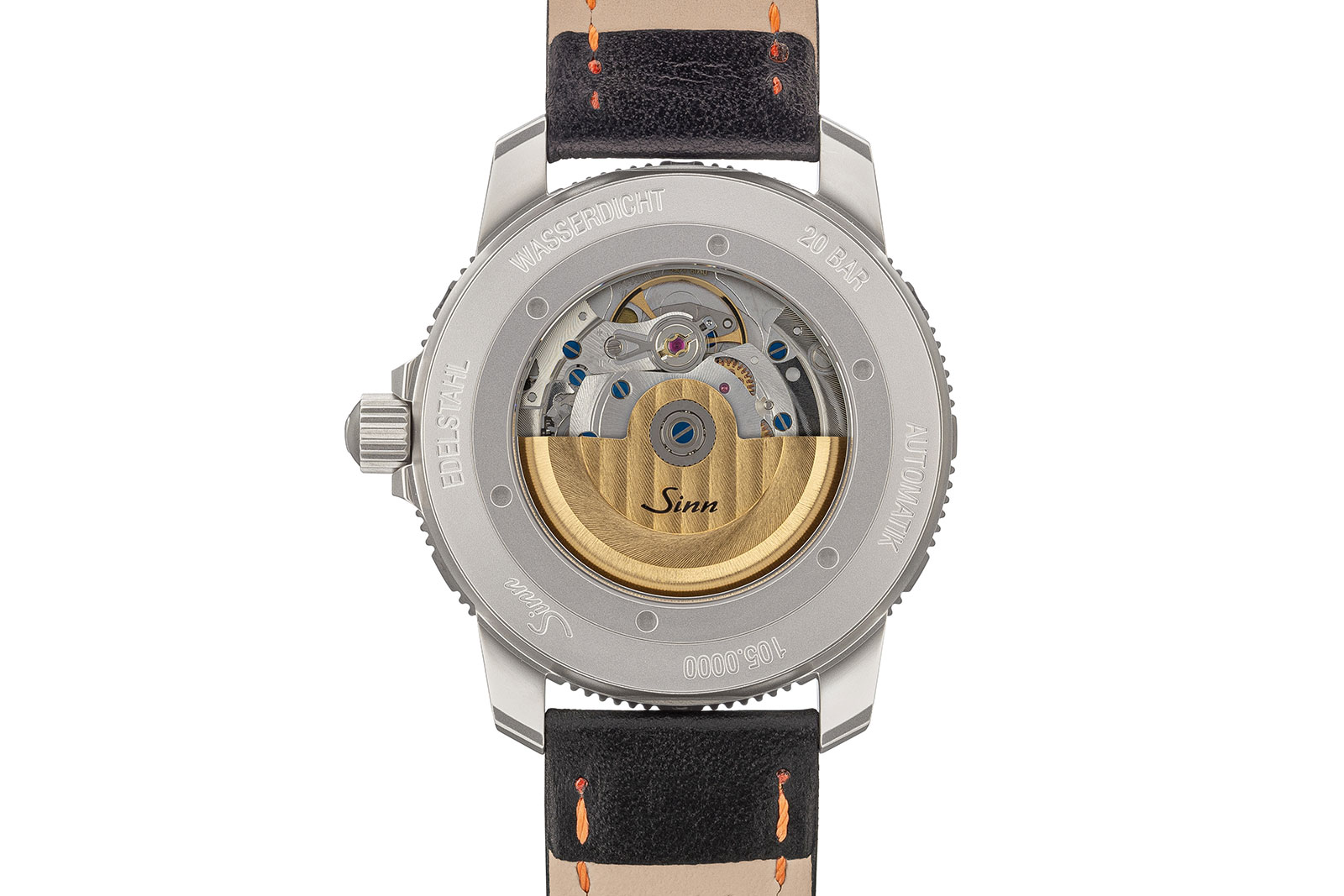 Prices include German VAT of 19%