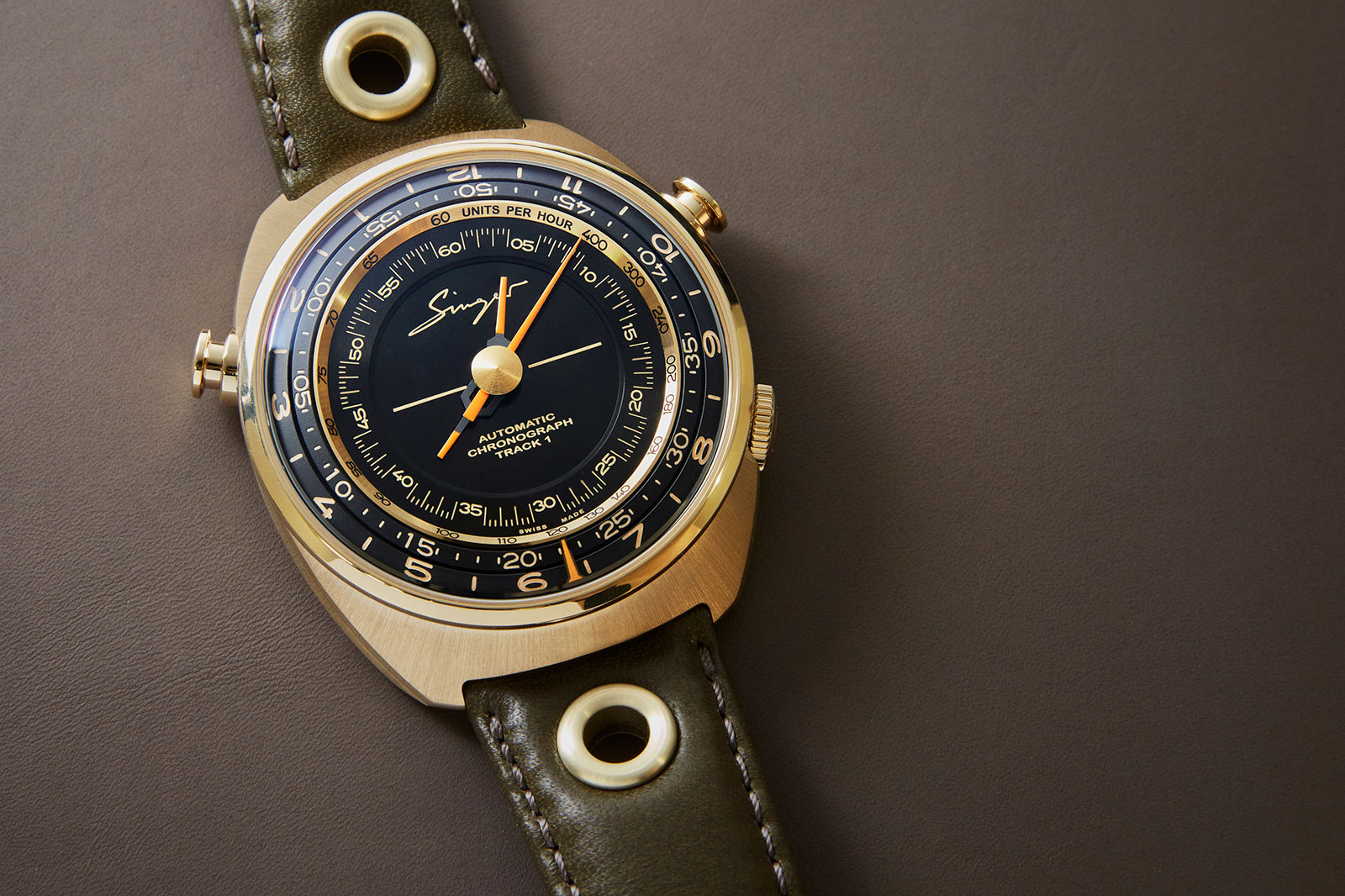 Known for its acclaimed and pricey rebuilt Porsche 911s, Singer Vehicle Design forayed into watchmaking last year with the Singer Reimagined Track 1 chronograph, which boasts retro style and an cleverly constructed movement. Launched as a limited edition with a titanium case, the chronograph now makes it debut in 18k yellow gold as the Track 1 Geneva Edition.

The Track 1 is result of an all-star team assembled by Singer. Styling was done by Marco Borraccino, best known for his stint as chief of Panerai’s design studio. And behind the mechanics was Agenhor, the Geneva-based complications specialist led by noted movement constructor Jean-Marc Wiederrecht, which counts Hermès, Van Cleef & Arpels, MB&F and Fabergé amongst its clients.

Singer Reimagined is set to unveil four new editions of the Track 1 each year for the next two years, starting with the gold Geneva Edition that retains the same 1970s-inspired cushion case with a fine radial brushed finish. Here the 43mm tonneau case is in 1N yellow gold – a pale and more uncommon alloy than the brighter 2N or 3N yellow gold most frequently used in watchmaking. The alloy recalls the tone of vintage 14k gold watches, but it maintains an 18k purity, which is 75% gold and harder than 14k. The subdued yellow contrasts well with the black dial, but without crossing into flashiness.

Despite being a large watch, the Track 1 wears smaller than its dimensions indicate, because of the its short lugs. The Geneva Edition, however, is significantly weightier than the titanium version, which is a boon or bane depending on personal preferences. The watch is delivered on an olive strap featuring gold-plated titanium rivets and an 18k gold folding clasp.

Material aside, the case design and finish remains identical with alternating brushed and polished surfaces, and topped with a domed sapphire crystal. The chronograph pushers are located on opposite sides of the case at two and 10 o’clock – a layout nicknamed “Bullhead”- while the crown is partially recessed at four o’clock, preventing it from digging into the wrist and further emphasising its secondary role in a chronograph. While the Track 1 bears resemblance to 1970s chronographs from the likes of Heuer, Breitling and Omega, inside it’s equipped with the radically modern AgenGraphe movement, which was first used in the Fabergé Visionnaire Chronograph. Thanks to the unique central chronograph display  of the AgenGraphe, the Track 1 was conceived on the precept that measuring elapsed time is a driver’s primary requirement on the track, and thus it features a large co-axial stopwatch while the time display is relegated to the periphery of the dial.

On the Track 1 Geneva Edition the design of the dial has been further streamlined to improve legibility. A fine horizontal line across the center of the dial adds to its vintage appeal, with the brand logo above it.

Hours and minutes are once again indicated by a slim orange pointer at six o’clock, which is set over two concentric, matte black ceramic rings that sit on the edge of the dial. The numerals and indices on the rings are engraved and filled with gold-coloured luminescence. Reading the time takes a little getting used to, and is approximate to the minute, since the minute ring lacks seconds markings. Instead of having a separate registers for the elapsed hours and minutes as on a conventional chronograph, the Track 1 centralises everything on the same axis. The tachymeter, sitting on a sloping, brushed gilt ring, is followed by a single chronograph scale.

It can be read intuitively like a standard three-hand watch with the hours, minutes and seconds indicated by orange hands. The longest hand indicates seconds, the shorter orange hand points to the minutes, and the longer hand, the hours. While more refined visually, the simplified dial means the gold Track 1 is not as easy to read.

The movement remains the same automatic AgenGraphe cal. 6361, one of the most ingenious chronograph movements in modern watchmaking and one that took almost a decade to develop. The rotor sits under the dial in order to allow an unobscured view of the 477-part movement from the back. Unlike a normal chronograph which has the chronograph mechanism built on top of the gear train, the AgenGraphe is constructed on a donut-shaped base movement. The double mainspring barrels and going train positioned around the chronograph mechanism that sits right in the hole of the donut right in the centre. The impressive view from the back

Beyond the novel construction, the AgenGraphe also includes several patented details. The chronograph uses a column wheel control and an AgenClutch – a patented clutch that is best described as a hybrid of a vertical and horizontal clutch. It is driven by friction like a vertical clutch, which engages more smoothly than a horizontal coupling.

And instead of regular toothed wheel, it relies on toothless wheels coated with a diamond nickel composite that engage via surface friction. In the event of shock, a tulip-shaped spring allows the wheels to safely move apart, but they stay in alignment relative to each other thanks to a secondary, co-axial toothed wheel. The teeth on the secondary wheel, however, are exceptionally fine, ensuring that a shock that displaces the diamond-coated wheels will cause incur a maximum error of 0.33 seconds in the chronograph measurement. The visual beauty of the movement lies in its intricacy, but also in its finishing, which is nearly to the standard demanded by the Poincon de Geneve, or Geneva Seal, according to Agenhor’s Jean-Marc Wiederrecht. That means the steel levers of the chronograph have straight-grained top surfaces and chamfered edges, while wheels have bevelled spokes. The Track 1 Geneva Edition costs SFr72,000 before taxes and can be ordered directly from Singer Reimagined here.