Having just concluded, Monterey Car Week was a series of shows and auctions, concluding with the Pebble Beach Concours d’Elegance. The week was the venue for Porsche 911 specialist Singer Vehicle Design to exhibit the DLS for the first time in the United States. Launched in 2018, the DLS is a Porsche 964 that’s been entirely remade to be ultra-light and ultra-aerodynamic.

To go along with the car, Singer Reimagined rolled out the Track 1 DLS Edition. It’s a new take on Singer’s trademark central chronograph, reimagined to be, well, ultra-light, while retaining its recognisable case design and thoroughly original Agenhor movement. 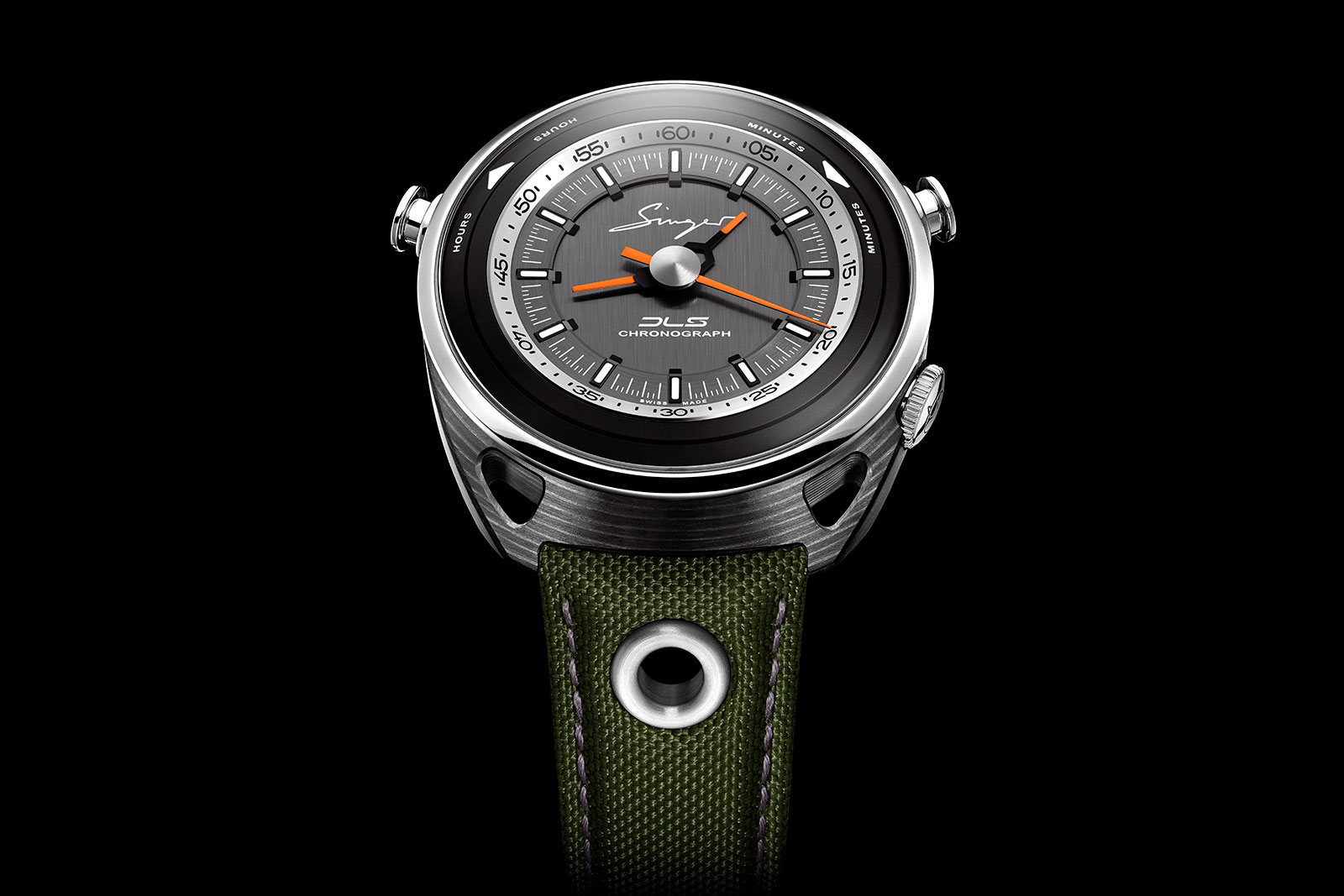 Because it combines a distinct, retro design along with a truly ingenious movement, I like the Track 1 (and I own another version of the watch). The DLS is essentially a condensed version of the same thing – and it’s cool.

The aesthetic is pared-back just enough, while the composite case is an interesting novelty. Though the material is common in watchmaking, it’s a first for Singer. 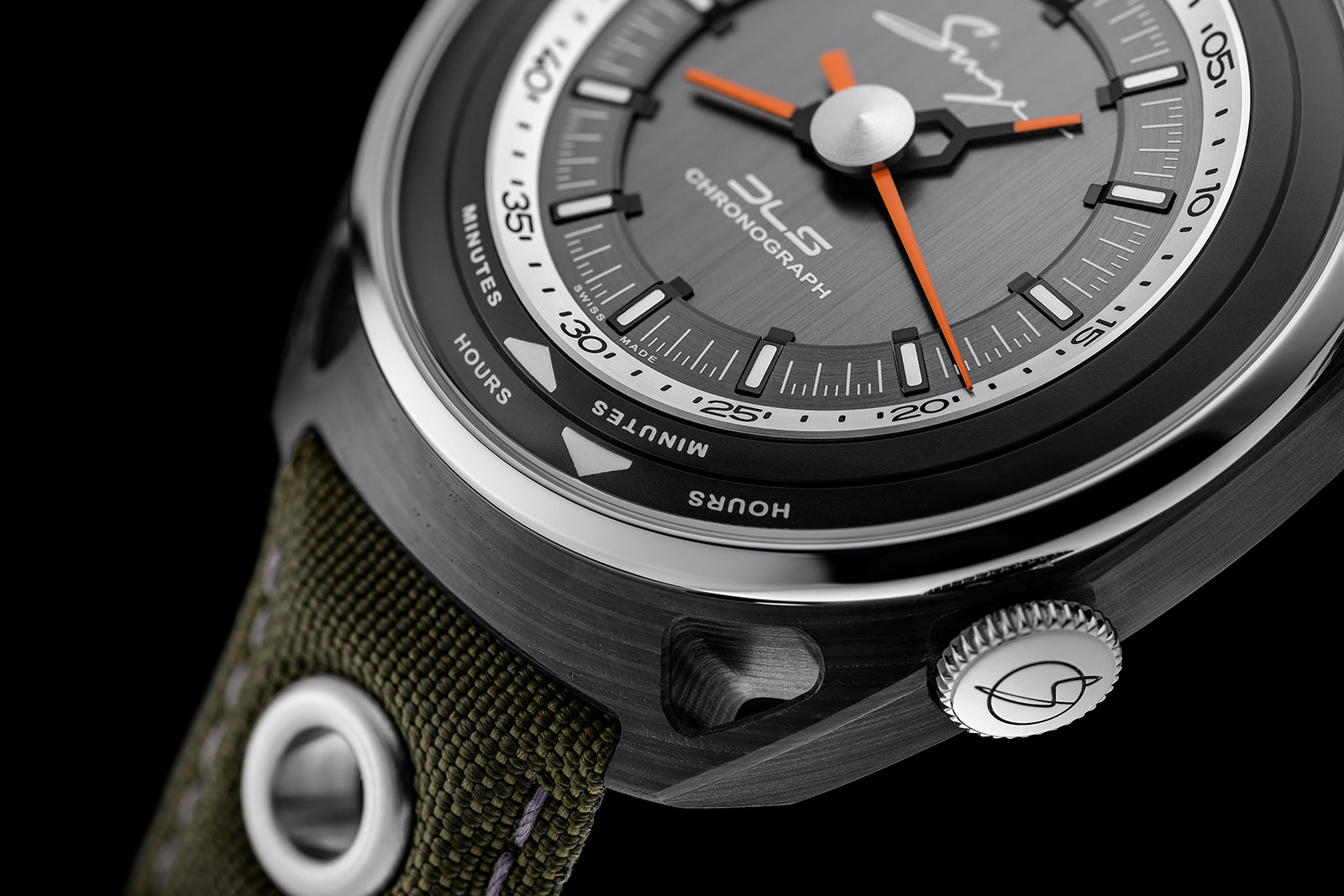 The only shortcoming I can uncover is a philosophical one: the DLS Edition echoes its namesake automobile with lightweight materials, but unlike the car, it doesn’t make any functional changes. The movement is identical to that of the standard model, but it is admittedly an excellent and innovative movement.

Still, all that’s a moot point given that the watch is only available to owners of the car, of which there will be just 75.

Singer Vehicle Design is a cult brand that specialises in modifying the Porsche 964, the 911 version produced in the early 1990s. In 2017, an American client asked for a high-performance version of its automobile, resulting in the DLS, created in collaboration with Williams, the race-car engineering outfit best known for its eponymous Formula 1 team.

Short for “Dynamics and Lightweighting Study”, the DLS is essentially a 964 that’s undergone a Formula 1 facelift, making it lighter, stiffer, and faster. So it’s made up of lots of carbon fibre composite, with a body that’s been refined to be even more aerodynamic. 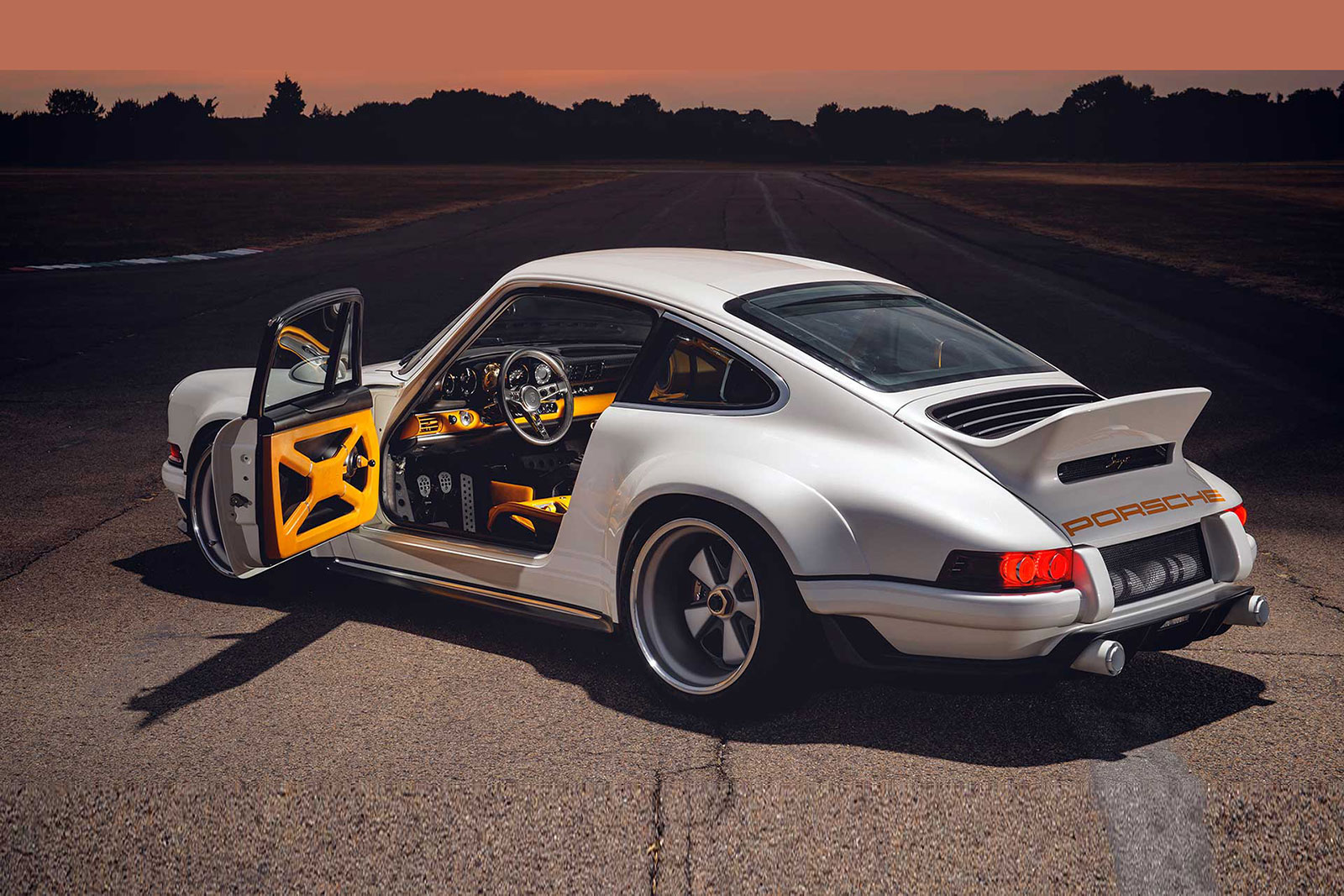 Priced at about US$2 million, the DLS is a limited edition of 75 cars – all sold out apparently. Only the 75 would-be owners of the car will be able to order a DLS Edition chronograph.

The DLS Edition wristwatch approaches the matter in the same way. All the metal components, like the bezel and pushers, are titanium, while the case is made of carbon composite – with unidirectional layers hence the concentric grain – with each of the lugs hollowed out to further trim the weight. 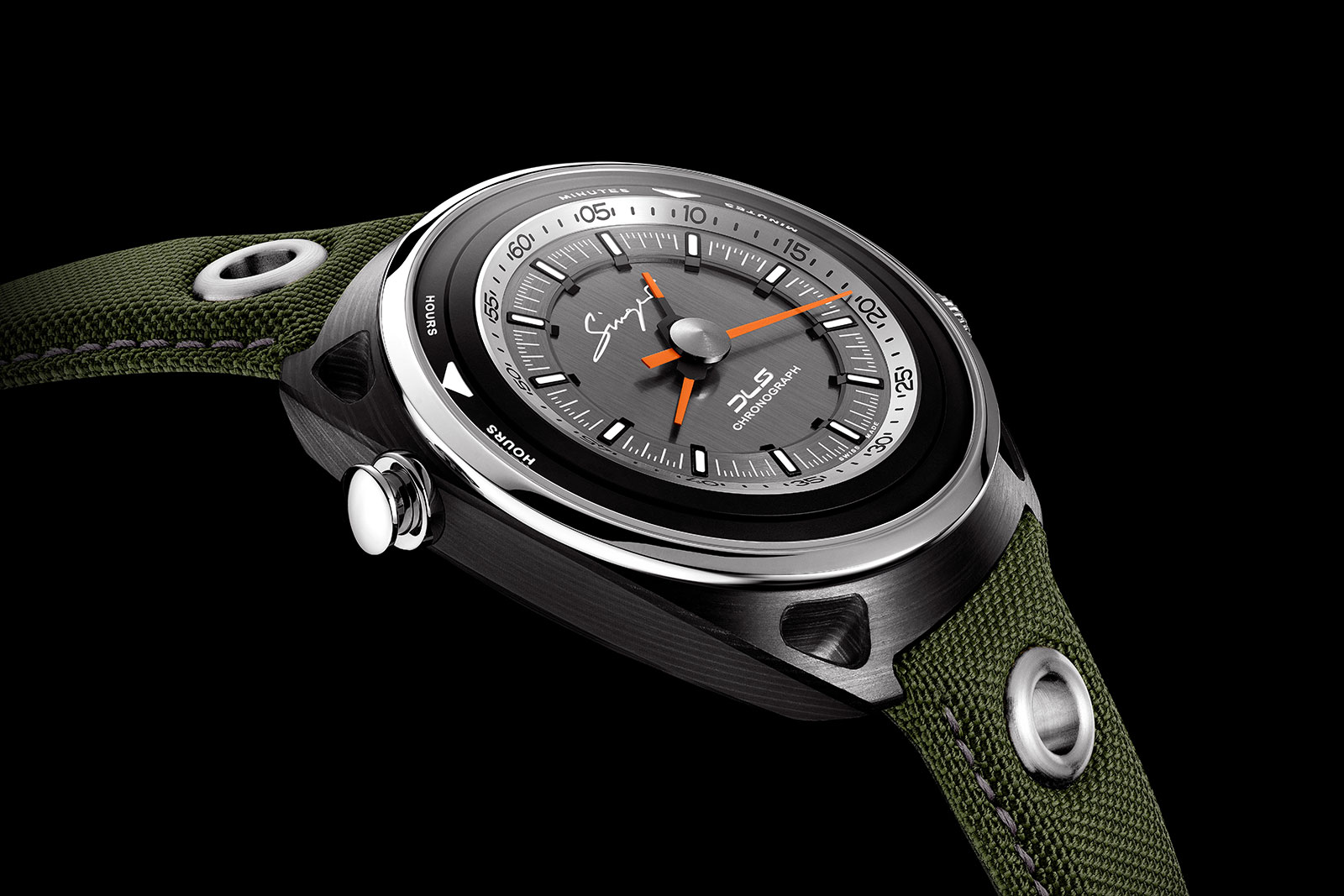 To go along with the lightweight construction, the DLS Edition has a stripped-down dial, which brings to mind the Flytrack, a simplified version of the Track 1 that has only a flyback seconds.

Its minimalism is extreme but also functional. Everything that’s superfluous has been removed, including the hour and minute scales for the time. In their place are twin rotating rings, each with an arrow pointing to the current time.

The chronograph is similarly streamlined, leaving just the 60-minute scale for both the elapsed seconds and minutes, along with baton markers for the elapsed hours.

The DLS Edition is customisable to a degree, allowing the owner to match the livery of his car. Specifically, the case can be rendered in another material, titanium being an obvious choice, while the bezel, pushers, and crown can be treated with colour, while the finish of the dial elements can be varied. 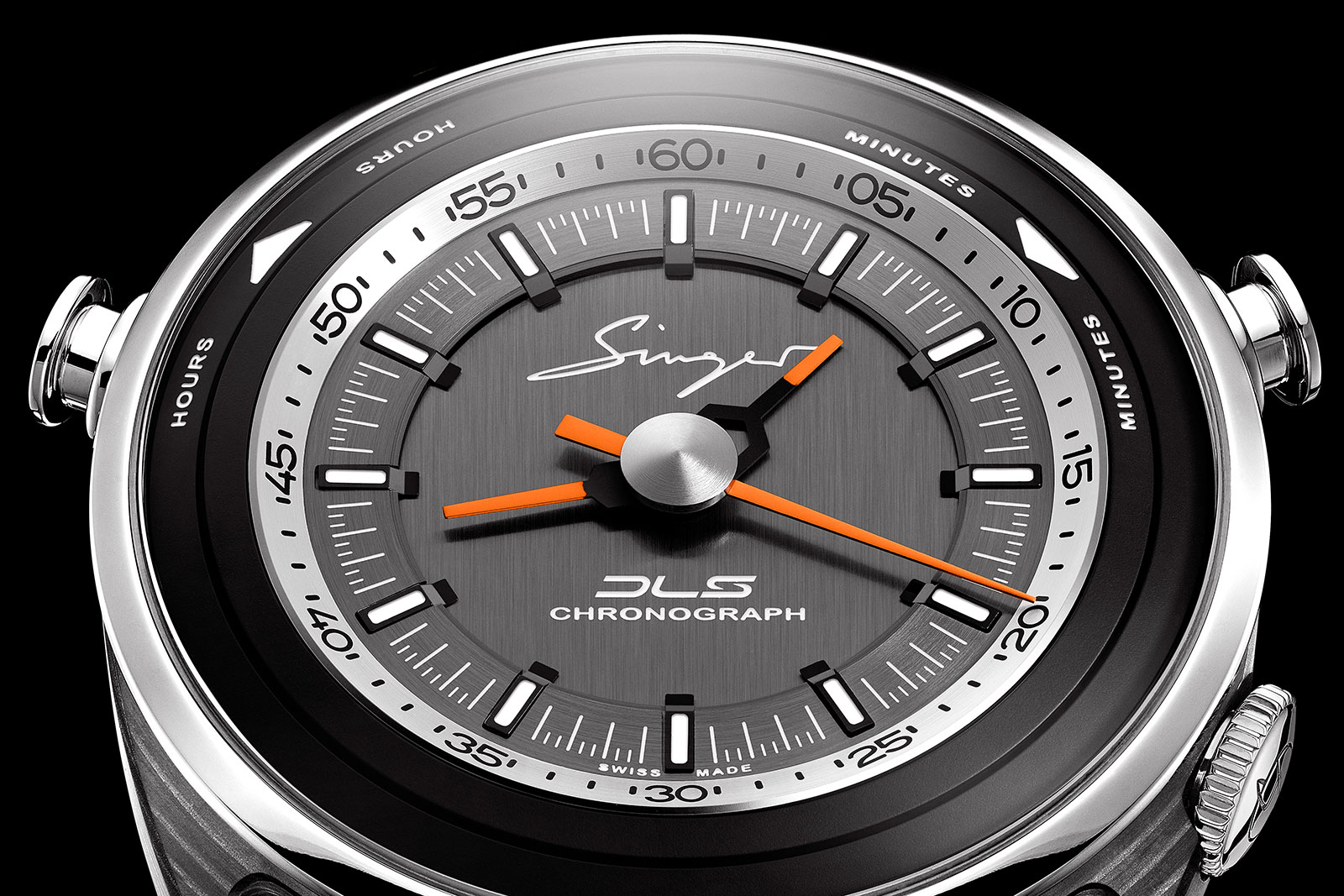 The calibre boasts several patented mechanisms within the chronograph, along with a unique donut-like construction that leaves the centre of the movement open for the complications. And it has a novel automatic winding mechanism that sees the rotor hidden under the dial, leaving the back entirely unobscured, revealing the intricate chronograph mechanism in all its glory. 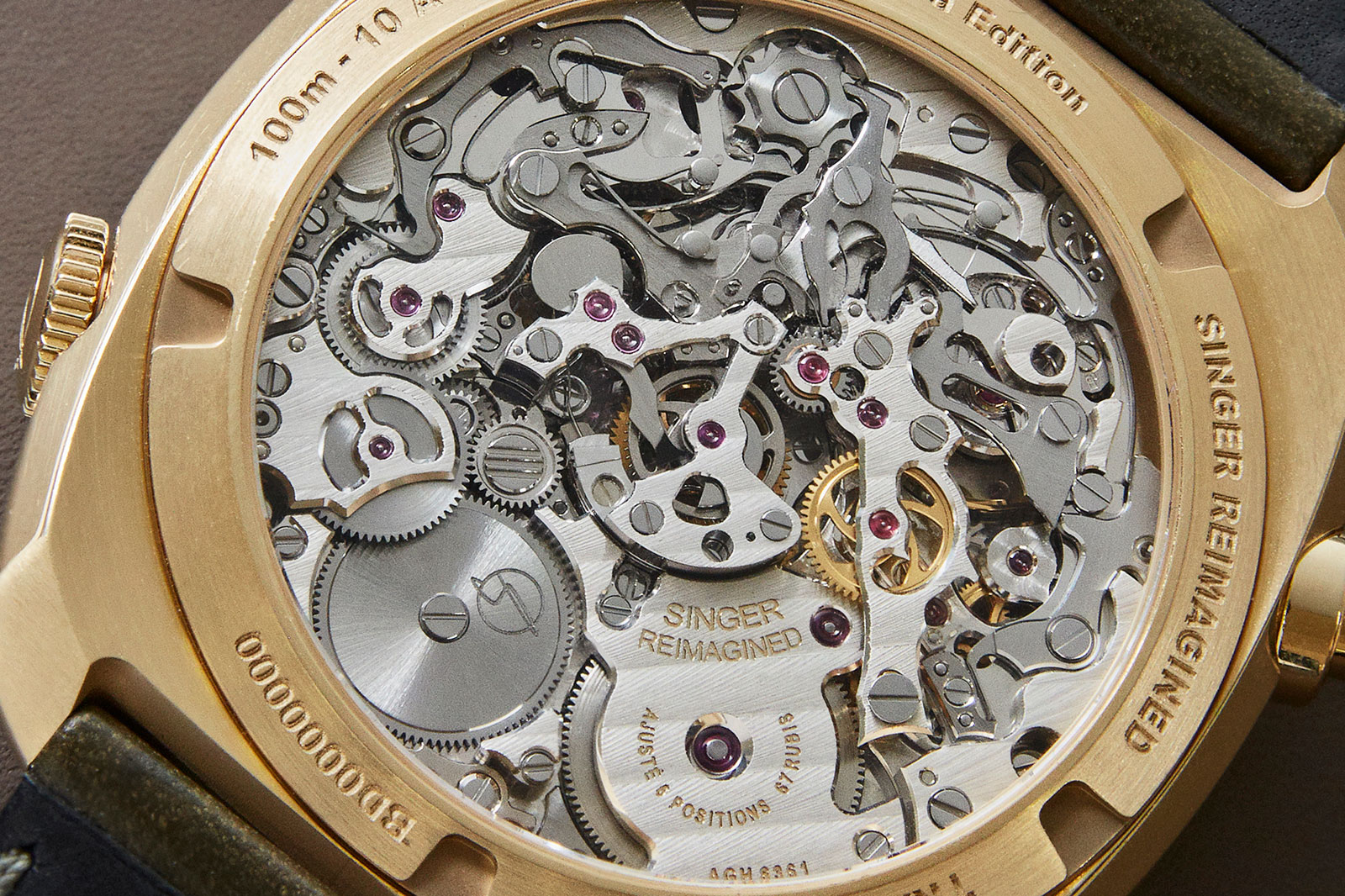 Limited edition: Maximum of 75, to match the number of cars made
Availability: Only to owners of the Singer Vehicle Design DLS
Price: On request, dependant on customisation (standard versions of the Track 1 starting at about US$50,000)