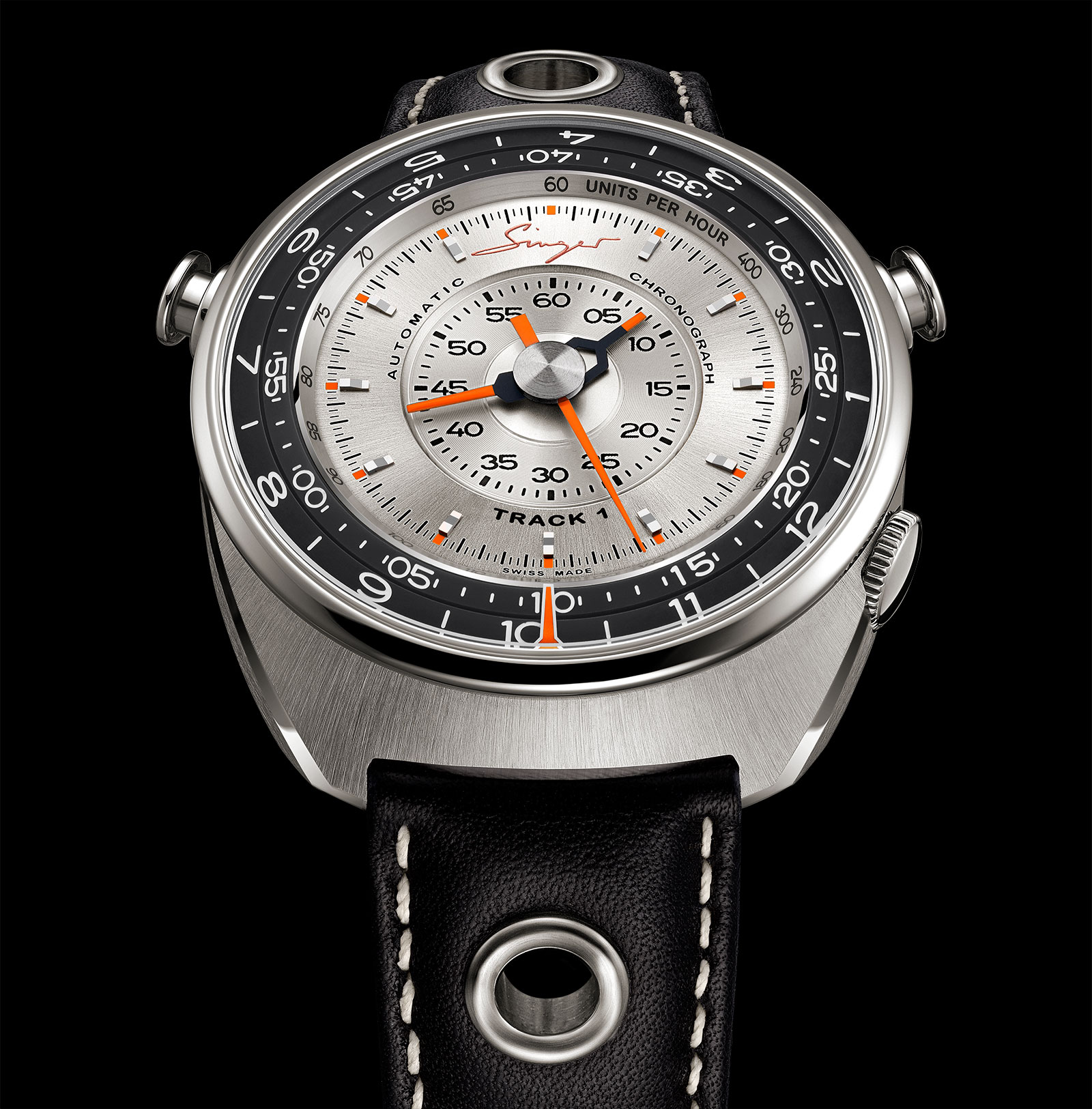 Singer is an acclaimed California-based modifier of 911s that are essentially Porsche 964s rebuilt with high-end, modern components like a new electrical system and iPod connectivity. Agenhor, on the other hand, is a movement maker based in Geneva led by Jean-Marc Wiederrecht that is behind wristwatches from famous names like Van Cleef & Arpels and MB&F.

The two precision engineering outfits came together for the Track 1, a chronograph with a 1970s style powered by a remarkably advanced movement – the somewhat more affordable horological equivalent of the US$400,000 Singer 911. It’s the first wristwatch by Singer Reimagined, a watchmaker set up by Singer co-founder Rob Dickinson, Wiederrecht and Marco Borracino, who spent four years as chief designer at Panerai. The Track 1 is chronograph first and wristwatch second. All the chronograph counters on the Track 1 are co-axial on the centre of the dial, with the time-telling hour and minute hands relegated to the periphery.

A “3×60” chronograph display takes up the silvered central portion of the dial with all three of its counters – hours, minutes and seconds – equipped with instantaneous, or jumping, hands. On the outer edge is the tachymeter, and next to it the 60-second scale with orange accents and an orange seconds hand. The innermost scale is for both hours and minutes, each indicated by an orange-tipped hand. Time is indicated with two rings and an orange pointed at six o’clock; above the time is 10:10.

The unusual display is possible thanks to the unusual AgenGraphe cal. 6361 movement inside. Having made its debut in the Faberge Visionnaire Chronograph earlier this year, the AgenGraphe is the result of almost a decade’s development.

The AgenGraphe relies on a clever construction Agenhor has used in other movements, which leaves the basic bits on the out portion of the base plate and the centre free for complications. Here the chronograph mechanism sits in the middle of the movement, with the barrel, gear train and so on positioned around it. This allows for enough height for a sophisticated chronograph mechanism, as well as a respectable 60-hour power reserve. The chronograph has both a column wheel and vertical clutch, typical of many modern chronograph movements, but the clutch is an improvement on the conventional design. It features smooth-edged, diamond-nickel composite coated wheels that can mesh with contact friction, instead of interlocking teeth. Under the smooth-edge wheels are more conventional toothed “security” wheels to keep them in alignment. The complex construction explains why the calibre is made up of 477 parts, nearly double that of an ordinary chronograph movement.

Measuring a large 43mm wide by 15mm high, the case of the Track 1 takes its cues from 1970s watches, with a domed, cushion form that’s characteristic of the era. And the chronograph pushers are at two and ten o’clock, the “bullhead” configuration that’s also typical of the 1970s. It’s made of titanium, with a radial brushed finish on the top that’s de rigueur for this case style, as well as a domed sapphire crystal. The Track 1 “launch edition” is limited to 50 pieces, priced at SFr39,800 before taxes. That’s just over US$41,000. It’s available directly from Singer Reimagined.