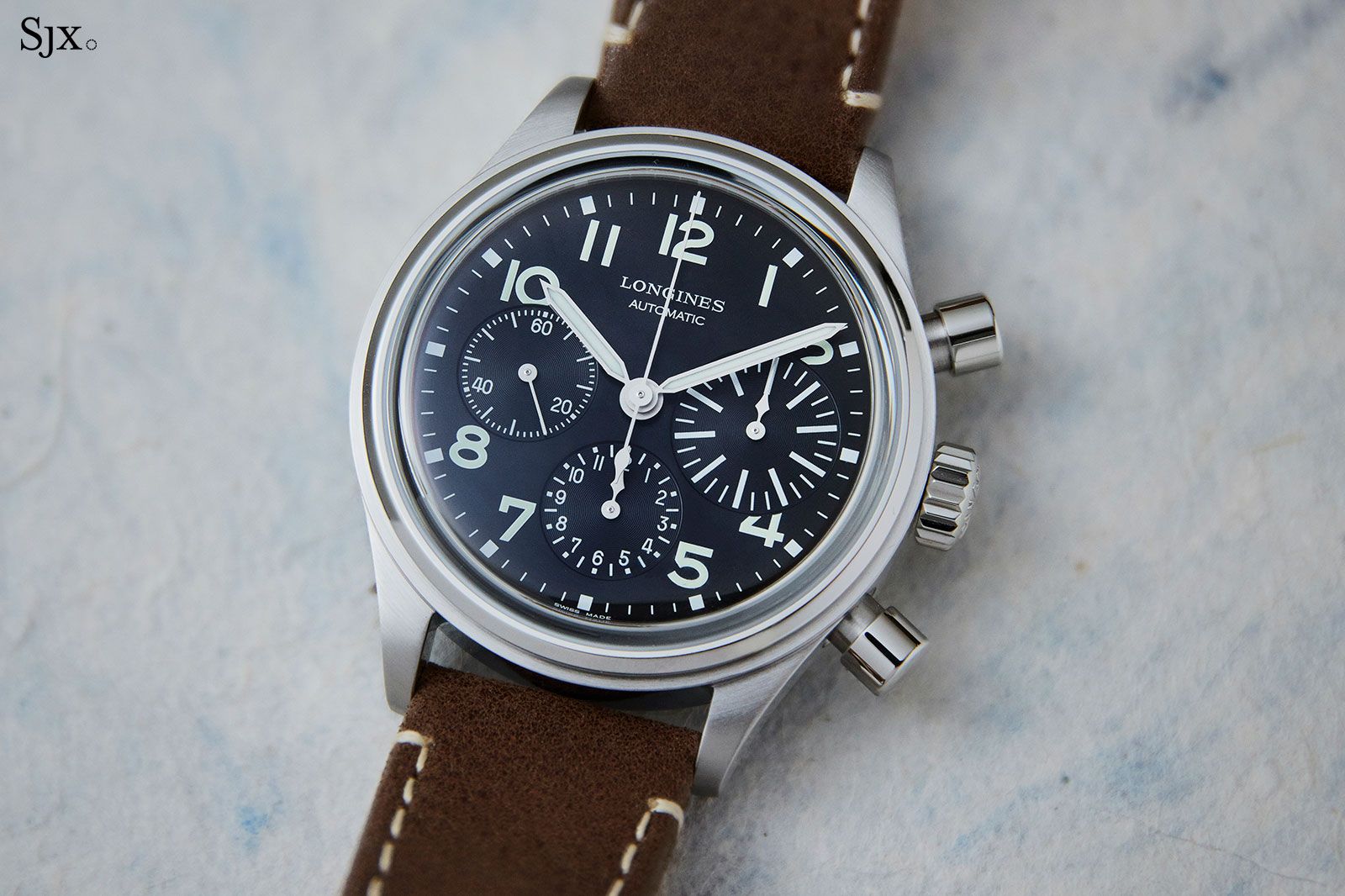 Longines’ highly regarded remakes of vintage watches tend to be faithful to the original and modestly priced. Most, however, tend to have tweaks – typically the addition of a date window – that mark them out instantly as modern watches. The Avigation BigEye chronograph, on the other hand, is competently vintage in style and feel.

The BigEye – named after its extra-large minute register – is based on a vintage original that Longines acquired from a collector, according to the brand’s President in a late 2017 interview with Australian publication Time+Tide Watches. Little else is known about the original, Longines has been cagey about its origins, though the look is familiar, being typical of 1970s aviation chronographs like a late-series Breguet Type XX.

The modern remake, however, is as spot-on as the original is hazy. It’s matte black with recessed sub-dials finished with stamped azurage, or concentric circles, and large, legible markings and numbers. All of the Super-Luminova on the dial is greenish, as brand new “lume” should be, which is a welcome departure from the faux vintage lume seen on vintage remakes. Everything is easy to read, except the 30-minute register which is confusing as the elongated hashmarks are in three-minute intervals, instead of the conventional five. On the vintage original the hashmarks were similarly laid out, except on a 15-minute counter, making it much easier and intuitive to read. Notably for a modern remake of a vintage watch, the chronograph registers are positioned just right and not too far from the edge of the dial as is often the case when small movements are used in big cases. That’s thanks to the cal. L688 inside, which is actually an ETA Valgranges A08.L01, itself an upgraded and enlarged version of the Valjoux 7750. That means it has a column wheel instead of a cam, as well as an extended power reserve of 54 hours, compared to 48 hours of the ordinary 7750. Like the dial, the case smart takes its cues from the original, including a double-step bezel with contrasting surface finishing, as well as lugs with a narrow side profile. The view from the side is enhanced by the domed, “box-shape” sapphire crystal that approximates the crystal on the original. The pump-style pushers seem extra-large, again modelled on the vintage original.

All of the case is neatly finished with linear brushing, including the back, which has been stamped with a stylised plane. The only downside of the case is its size, with a comparison to the vintage originals in mind. Though moderately proportioned by modern standards at 41mm in diameter and almost 15mm high, the case feels chunky and slightly substantial on the wrist. That being said, it feels and looks at home on the wrist.

And then there is the price, which is well under US$3000, making this a strong value buy by any standard.