Launched just earlier in the year, the Longines Avigation BigEye in titanium is a follow up to the original, which was historically faithful in terms of the design. The new titanium version, however, is more compelling.

The titanium BigEye retains the same design, but gets a new look with the blue dial and titanium case. Both substantially change its look and feel for the better, while retaining the usual affordability of Longines’ many remakes.

The new Avigation BigEye departs from the typical Longines formula for remakes, which to faithfully reproduce as far as possible, right down to the spotting on old dials. In contrast, the Avigation BigEye in titanium preserves the design of the remake, but renders the dial in a clearly modern texture and colour. And of course the case is titanium. 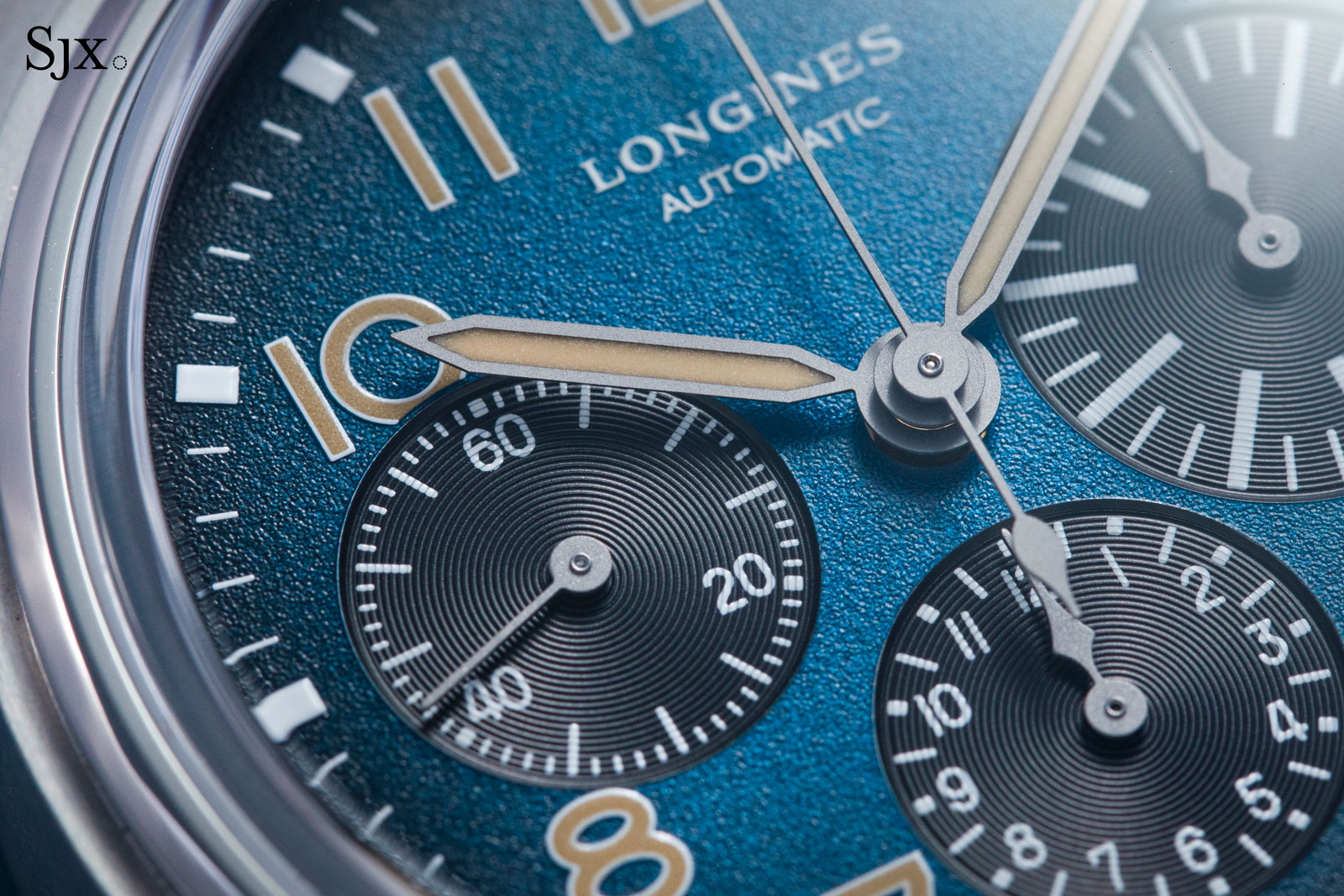 Notably, the new Avigation BigEye, along with other recent remakes like the Legend Diver in bronze, appear to mark a shift in Longines’ strategy for its historically-inspired watches. Instead of concentrating merely on one-for-one replicas, Longines is making them more interesting with modern colours and materials.

That’s a good thing, especially given the obvious fact that Longines’ designers have shown themselves to possess a good eye. They manage to tweak existing designs while preserving the spirit of the original, as demonstrated by the BigEye in titanium. 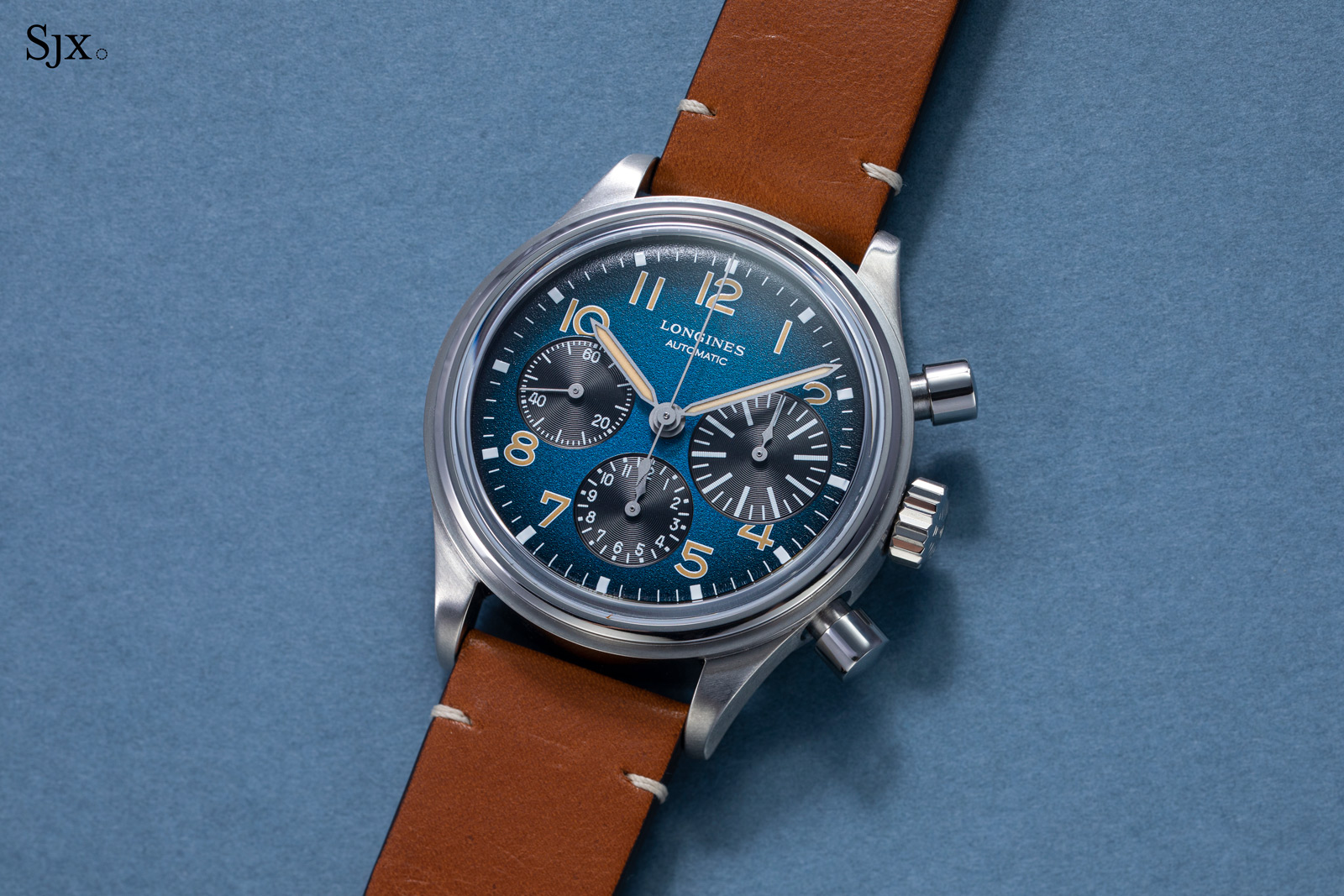 The result is a lightweight, and good looking watch. It does have the shortcomings of the steel version, namely the largish case and confusing minute register, but it is an appealing watch.

Granted, smoked blue is a fashionable dial finish today, but it still manages to stand out in combining a vintage design with this colour.

The design, dial finish, case material, and affordability makes it a strong buy. At a bit over US$3,200, the titanium model costs US$600 more than its steel counterpart, and is worth it.

The original Avigation BigEye is an old-school pilot’s chronograph with a black dial and large Arabic numerals. For someone who already watches in the same genre, the original doesn’t do much much differently.

That said, the remake’s dial stands out for its good proportions – the sub-dials are sized and spaced just right. That was true for the steel version and also on this titanium model. 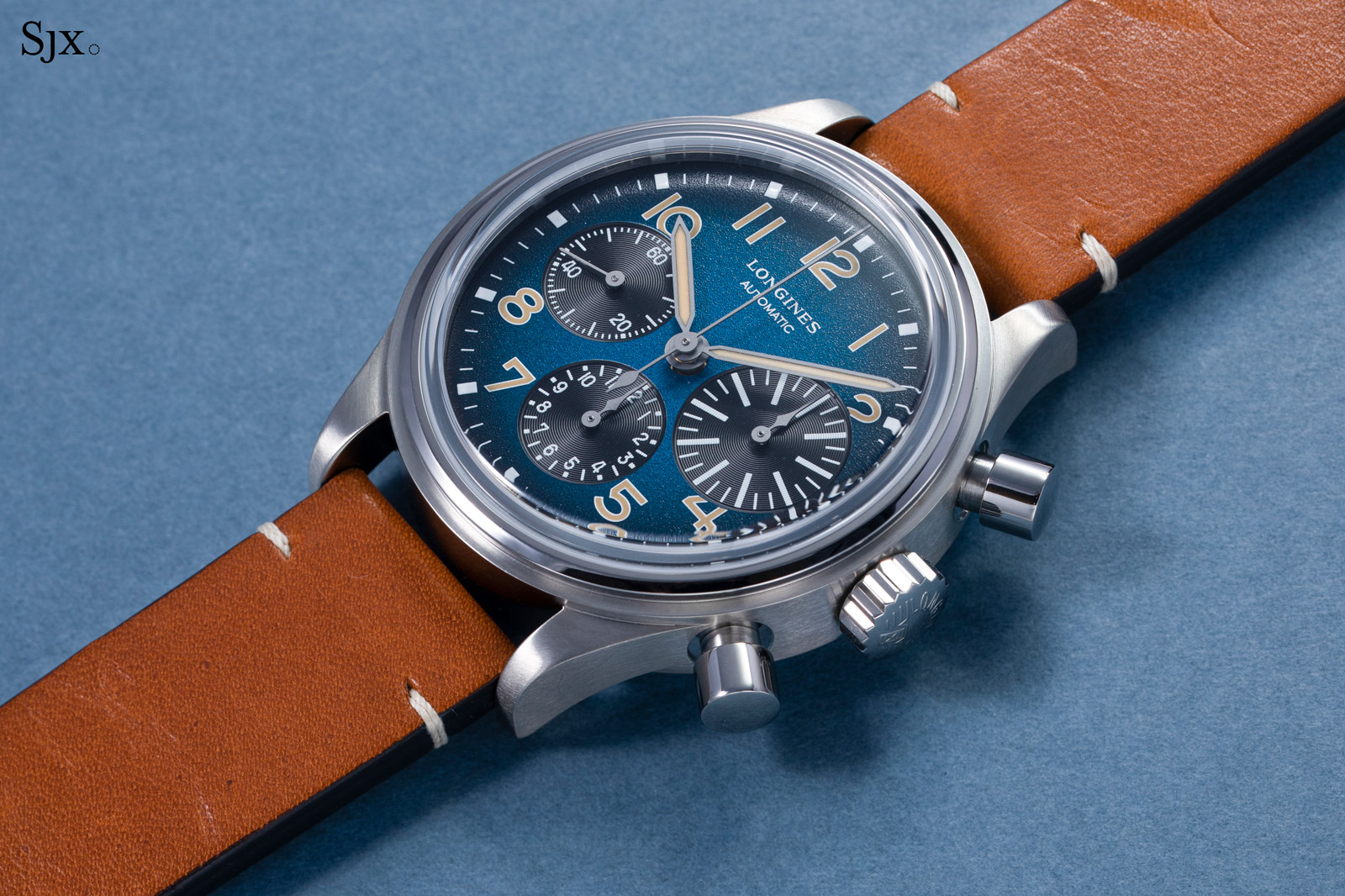 But the BigEye in titanium stands out with its colour. The dial is a bright blue in the centre that darkens towards the edges, a finish variously known as fumé or dégradé that’s something of a fad now. Though not unique, it remains attractive, especially here where it’s matched with black registers that echo the dark edges.

Also notable is the surface: the dial has a granular finish, instead of the sunburst brushing that’s more common with a smoked finish. The finish goes well with the colour and semi-vintage style. 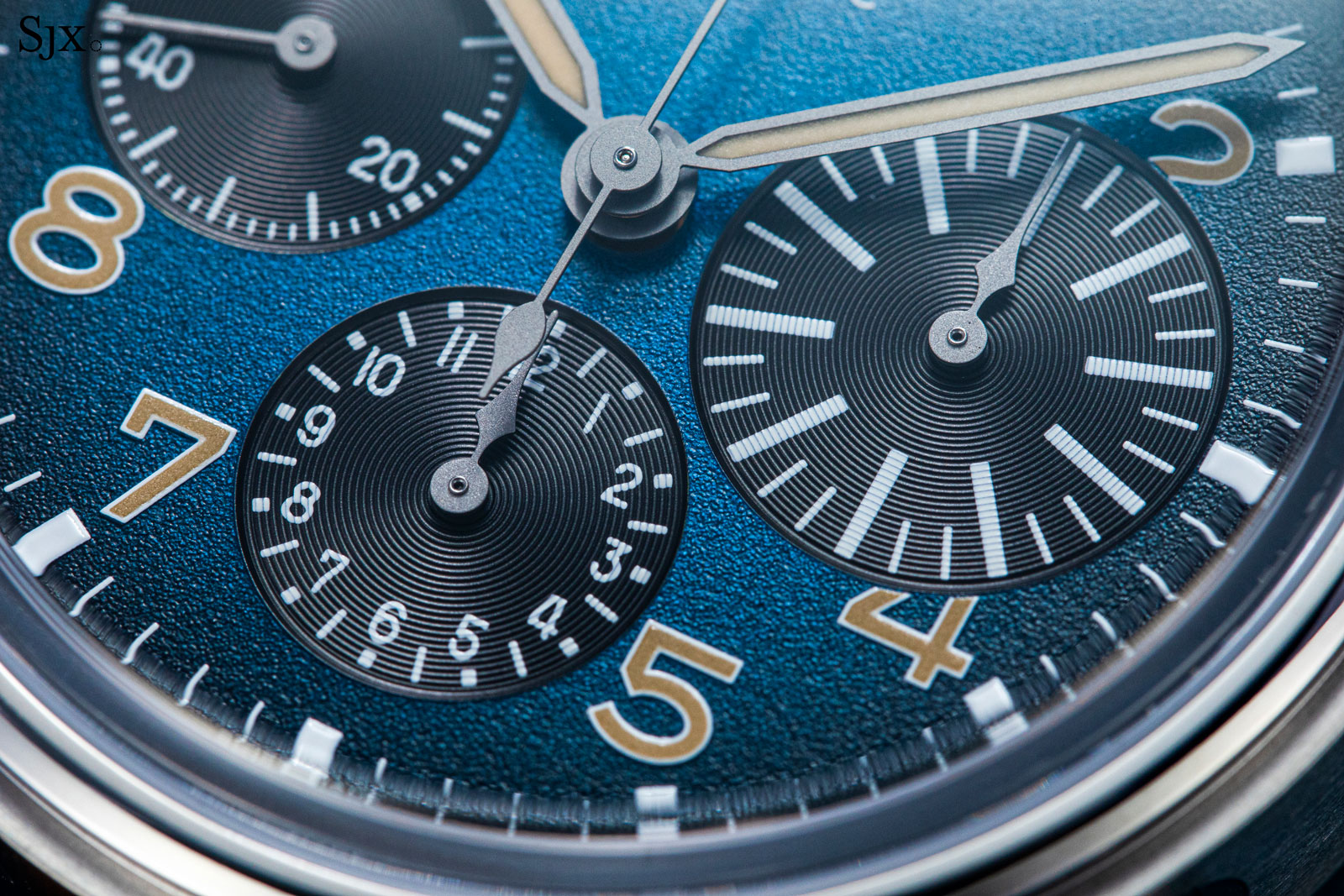 But the use of faux-vintage “lume” is questionable. The colours are clearly modern, so the parchment Super-Luminova on the dial and hands are out of place. In fact, the original steel model used Super-Luminova in its natural greenish-white colour, which would have worked better here.

The other shortcoming is the minute register at three o’clock. As on the vintage original, the hashmarks are graduated in segments of three minutes. Though the scale stays true to the historical inspiration, it is difficult to read being less intuitive than the conventional five-minute graduation. The BigEye in titanium is sized like the steel version, which means it’s biggish and feels that way. A slightly smaller case would have been helpful, but the size is probably as small as it can be given the movement within, and the need to preserve the balance and proportions of the dial.

The case isn’t excessively large at 41 mm in diameter and 14.5 mm high, but the narrow bezel makes the dial look wider while the lugs are fairly long. At the same time, the domed crystal accentuates the height. 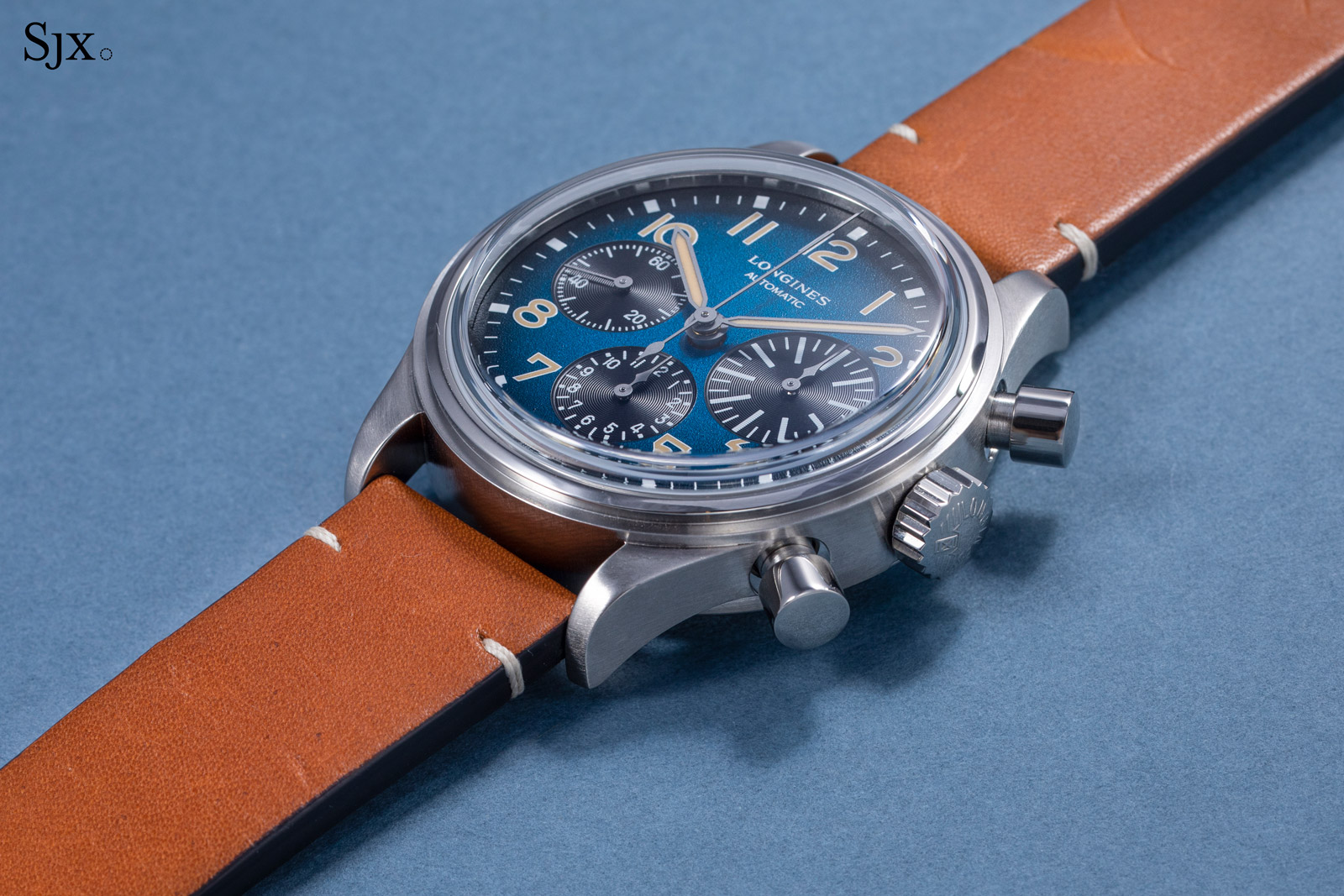 The case has good details given its simple form. The case middle is entirely brushed, but the thin, stepped bezel is polished, as are the crown and pushers. This gives the case some texture, preventing it from looking plain. A screw-down case back with a retro airplane logo hides the L688 movement within. It is a variant of the ETA Valgranges A08.L01. 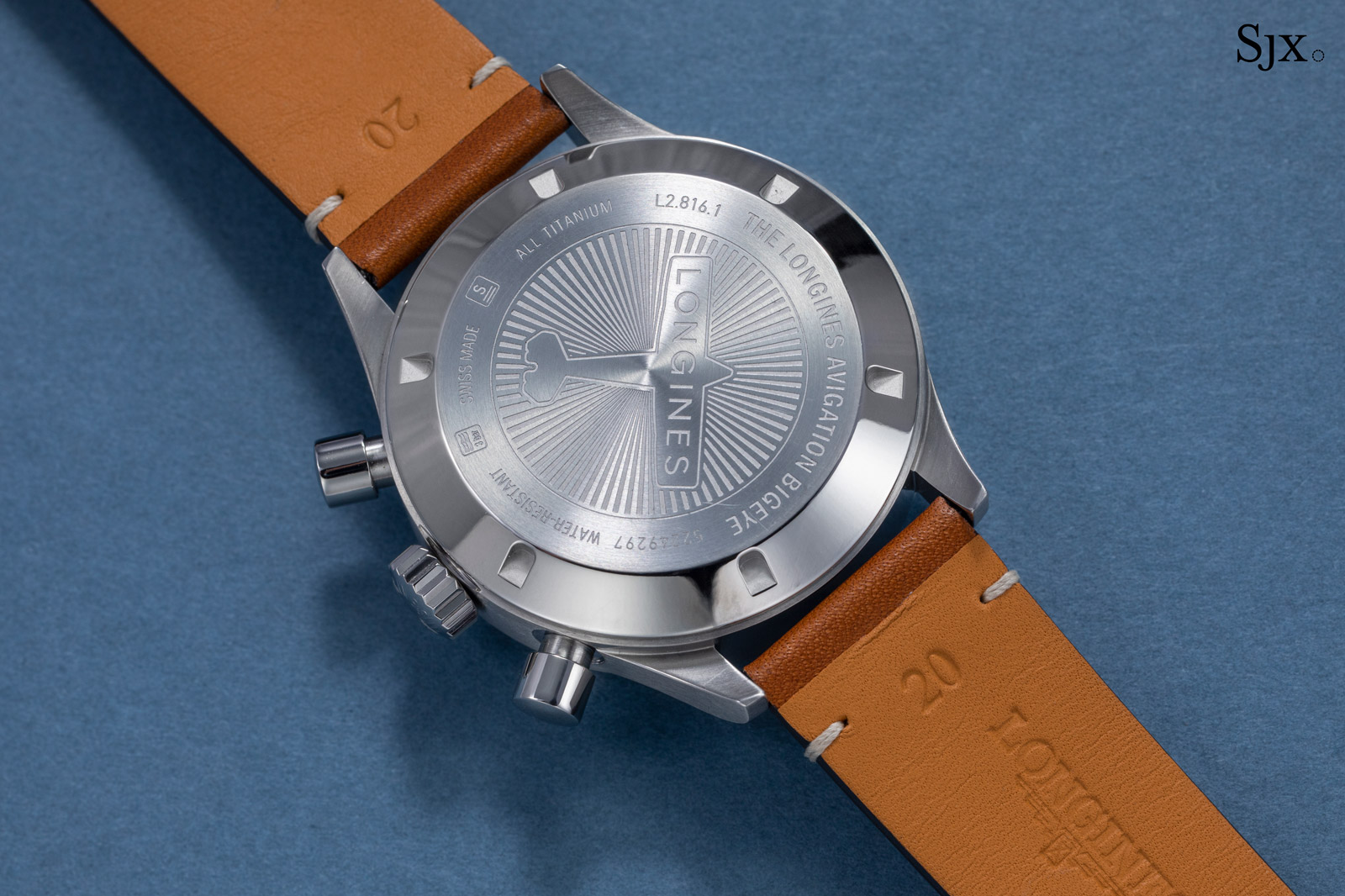 Based on the Valjoux 7750, the Valgranges family of movements were developed by ETA to fit larger cases. The A08.L01 is additionally upgraded, resulting in a longer, 54-hour power reserve. More notably, the cam found in the standard 7750 has been replaced by a column wheel.

The L688, however, is made by ETA exclusively for Longines, and further upgraded with a non-magnetic silicon hairspring.

All in all, it’s a reliable workhorse that’s been improved substantially, which means it offers strong value considering the price of the Avigation BigEye. Longines’ vintage remakes are all excellent value, but they are numerous and some are mundane. The Avigation BigEye in titanium is interesting in terms of aesthetics, while offering the same value. In fact, it arguably offers better value, being substantially more appealing in terms of design, while still being accessibly priced. The Avigation BigEye is one of the standout sports chronographs in its price segment.

Titanium with a smoked blue dial.