Following the launch of the Sinn 356 Pilot Chronograph limited edition to mark the 40th anniversary of The Hour Glass, the retailer has just announced yet another pilot’s chronograph, but this time, one that is more unusual and striking, the Longines Avigation Type A-7 1935 in bronze.

Characterised by an askew dial and movement, the Type A-7 “The Hour Glass” is based on the second-generation, 2016 reissue of the chronograph Longines supplied to the US Army Air Corps in the 1930s that was known as the “Type A-7”. 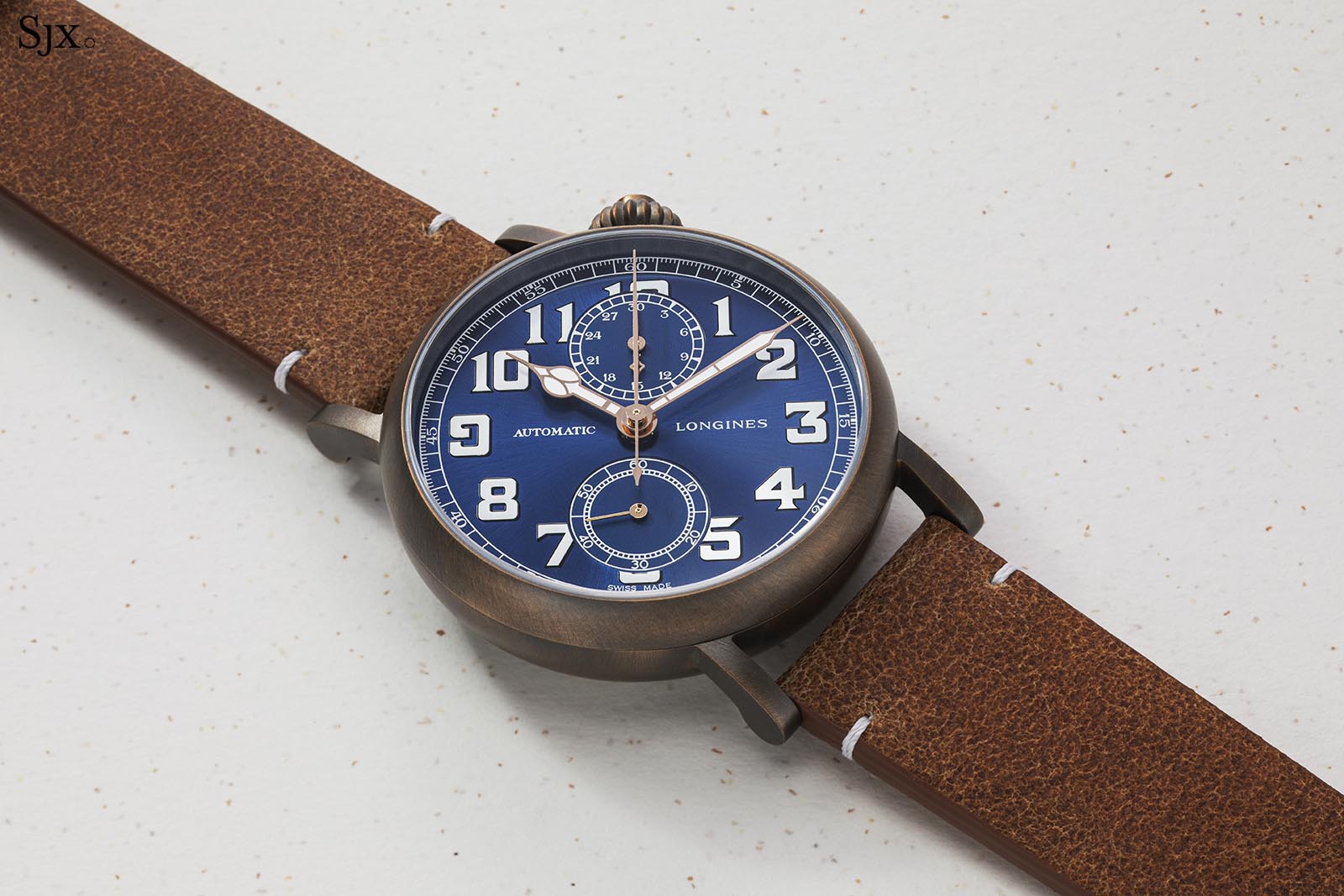 Though the distinctive case style is retained, the commemorative edition is made even more unusual by an attractive material and colour combination. The case is bronze and paired with either a blue or champagne dial finished with a metallic, sun ray-brushed finish.

While bronze might seem a bit too fashionable, especially in this price segment, it’s surprisingly uncommon for Longines. In fact, the new Type A-7 is only the second Longines watch to have a bronze case; the first was the Heritage Military Kuwait limited edition.

The case is made of phosphor bronze (CuSn8), an alloy that is 92% copper and 8% tin. In contrast to the aluminium-bronze alloys, used in watches like the Tudor Black Bay Bronze or Montblanc 1858 chronograph, which develops a brownish patina, phosphor bronze has a more reddish tone and develops a blue-green, sunken-treasure oxidisation over time. 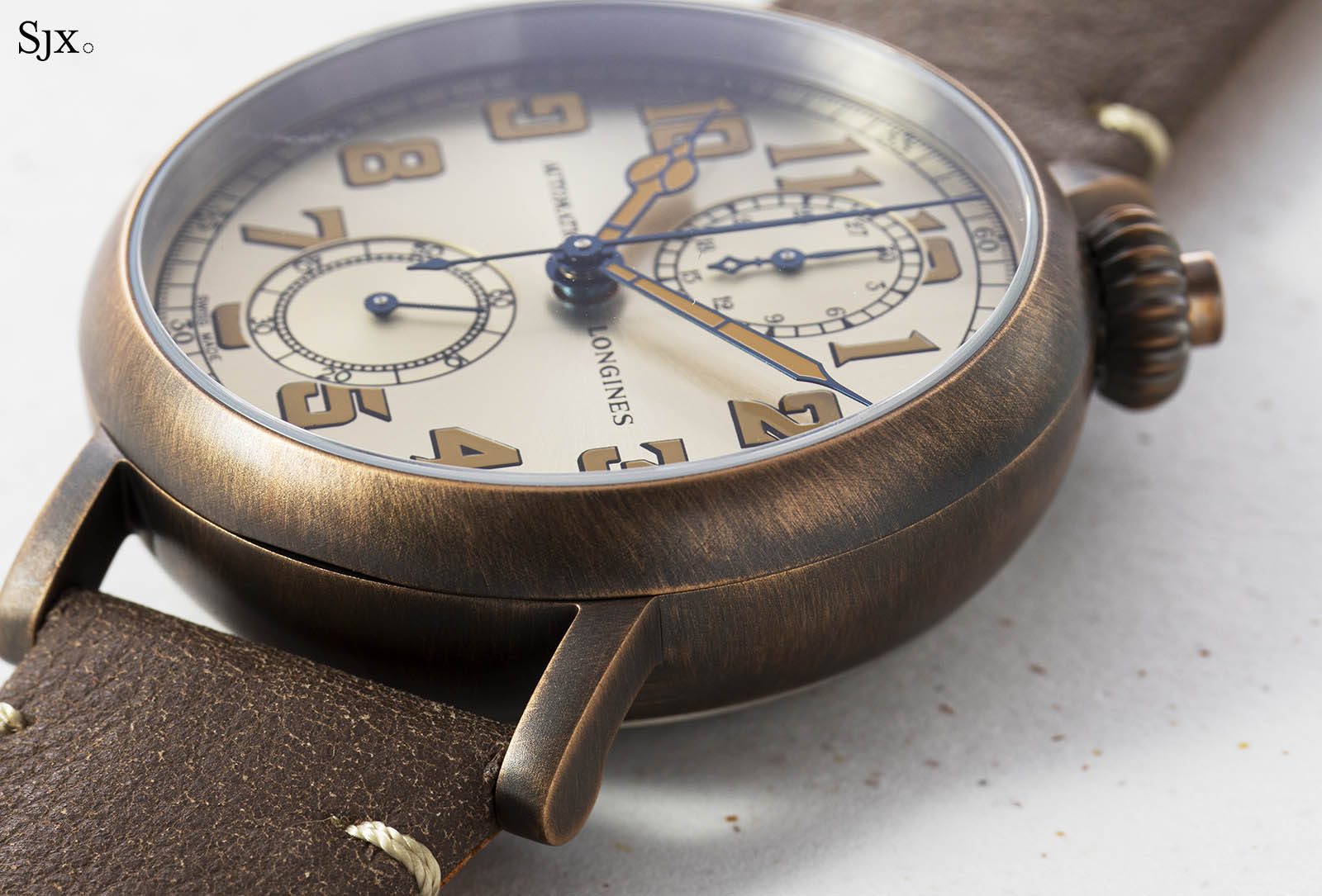 While the vintage Type A-7 was a 51mm diameter cockpit instrument, the reissue is a more manageable 41mm wide and 14mm in height.

Even though it is still substantial in size, the Type A-7 feels a lot smaller than its dimensions would suggest, due to the elegant, rounded bassine case as well as the matte, brushed finish, which in turn, draws attention to the metallic dial. 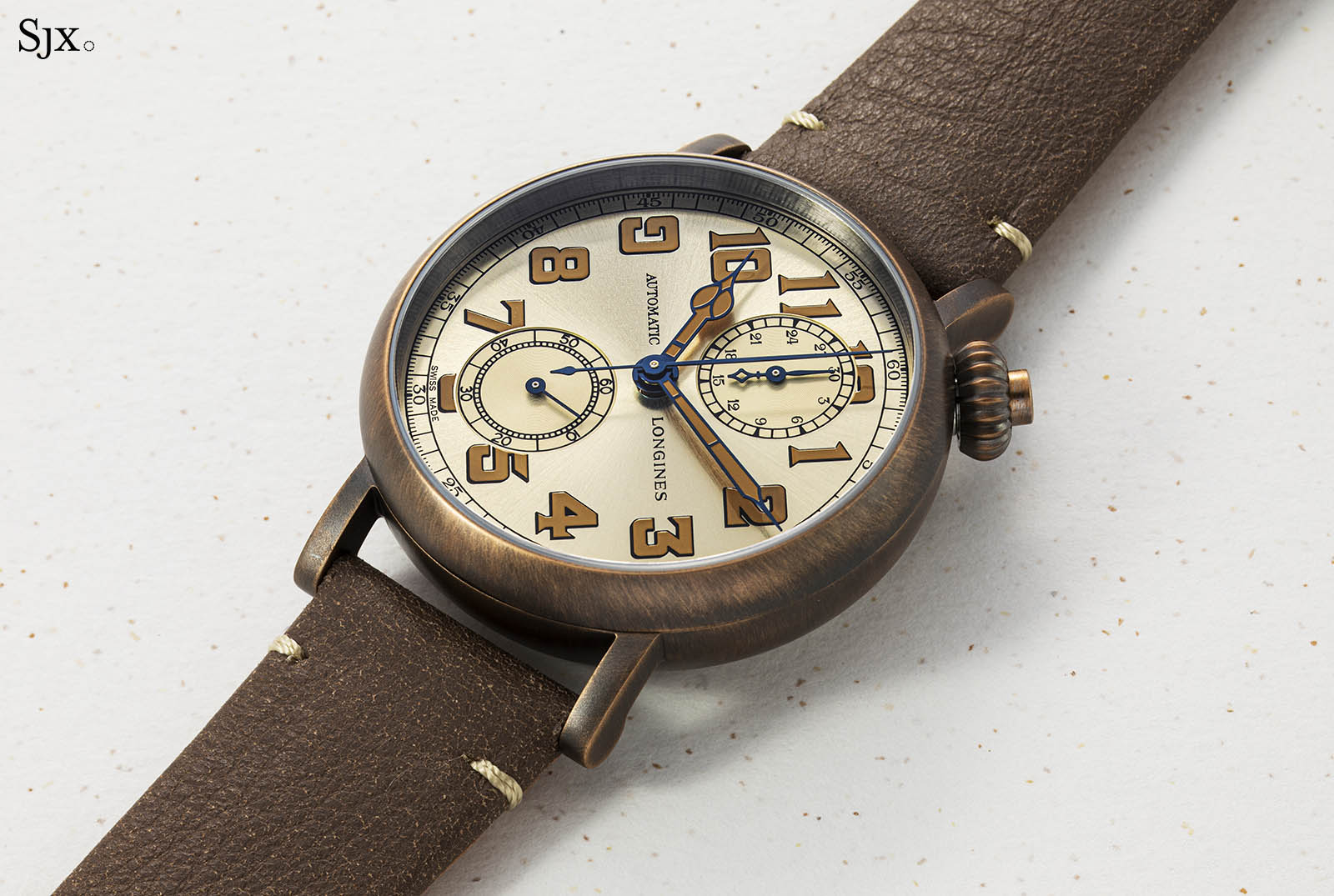 But the dial is rotated 40 degrees off the vertical, a feature originally intended to make time measurement easy even while the watch was worn on the inside a pilot’s gloved wrist. The hands of the counters differ from each other – leaf-shaped with a curved diamond-shaped counterweight for the 30-minute chronograph counter and baton-shaped for the small seconds. And more importantly, the watch forgoes the date display at eight o’clock found on the standard model – an element that is even more jarring due to the retro, asymmetrical design of the watch.

While the incorporation of such retro accents might seem heavy-handed, unlike most vintage-inspired watches that have more timeless designs, the entire design of the Type A-7 is so deeply rooted in its time that such simulative elements only enhances the appeal. The blue dial, on the other hand, features white numerals and pink gold-plated hands, which tie it nicely to its bronze case. 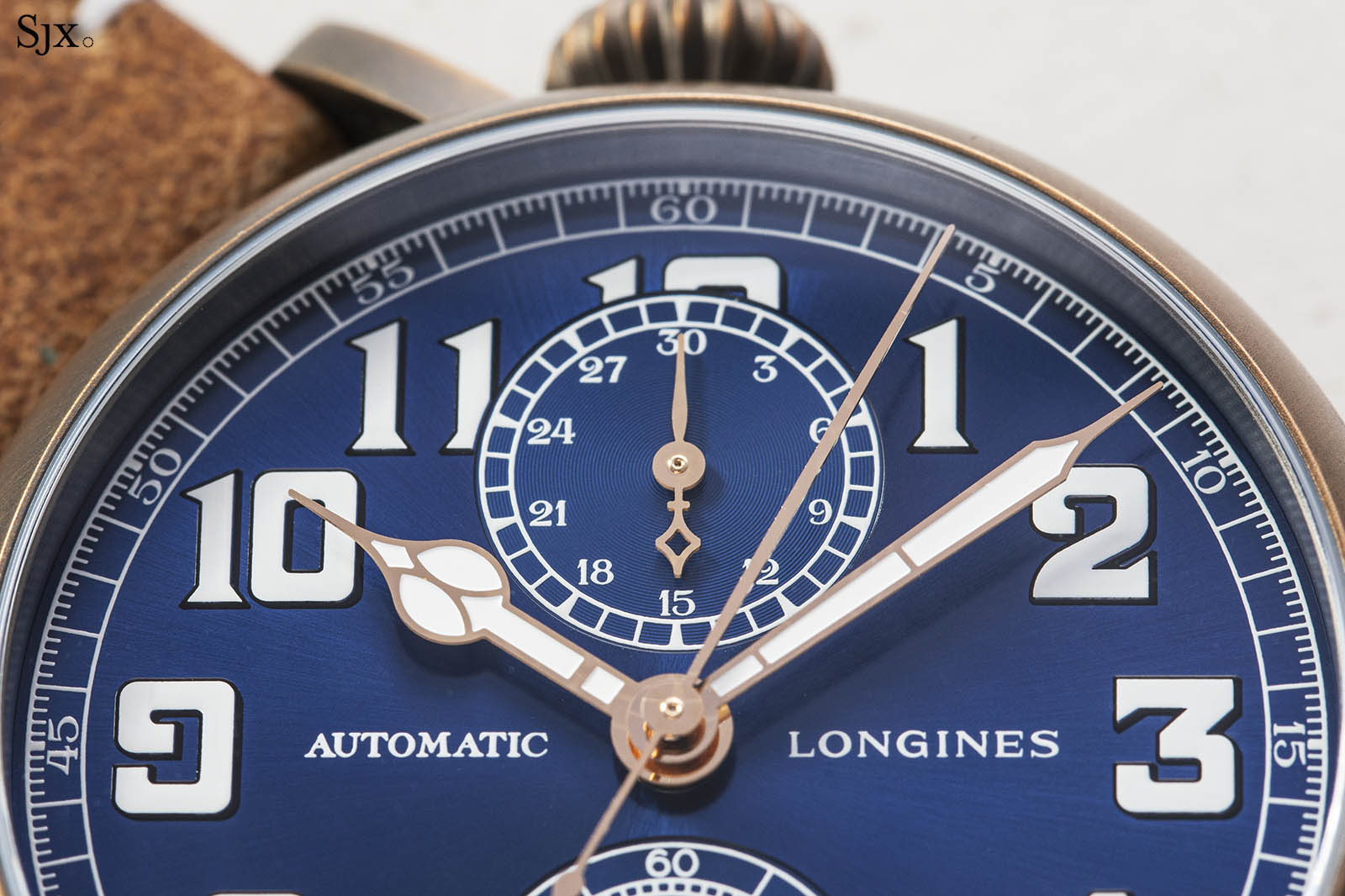 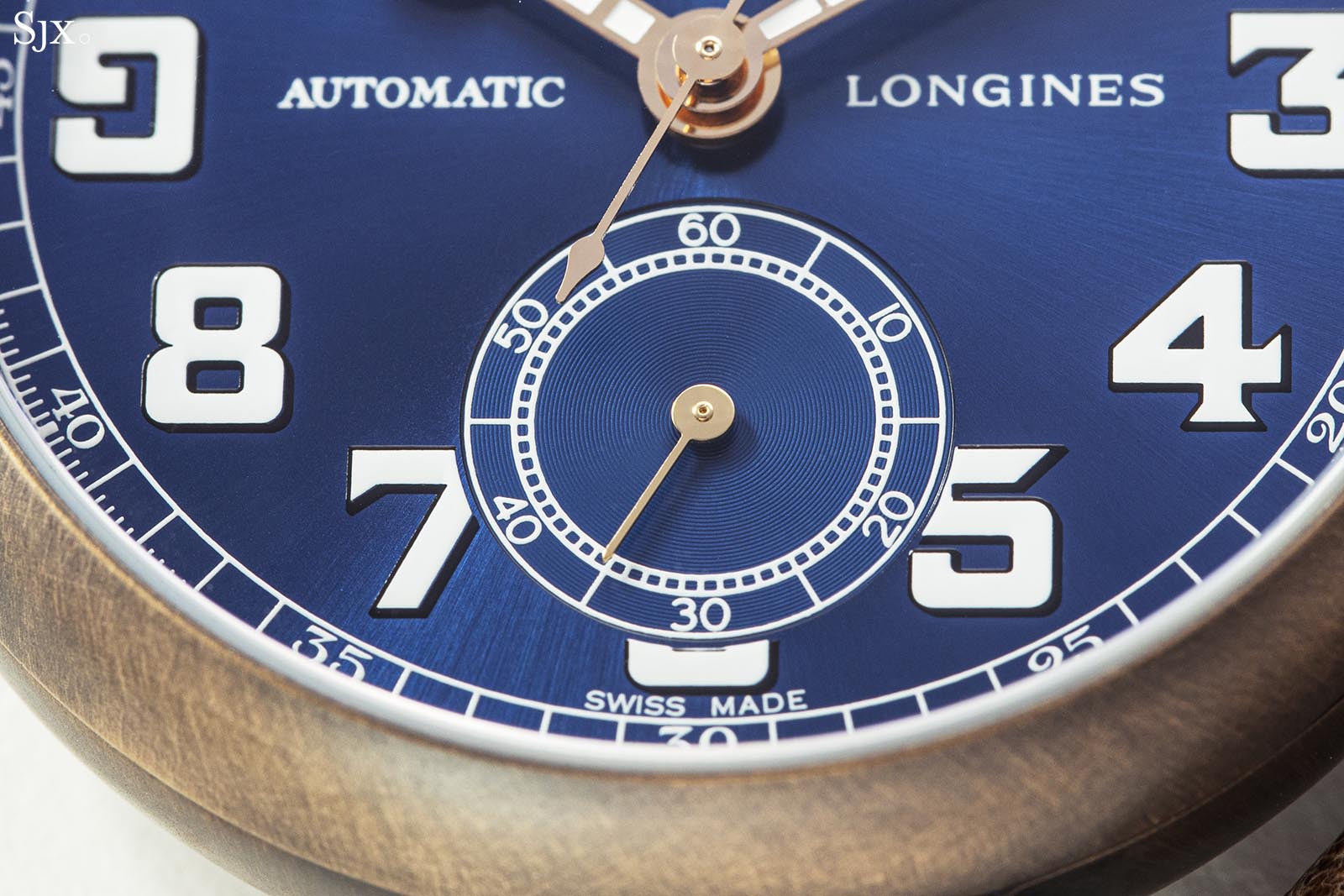 As with the original, the Type A-7 has a pusher embedded in the crown that starts, stops and resets the chronograph, thanks to the L788.2 movement inside. With a large onion crown at two o’clock and the counters vertically aligned, the movement is a standard one that was rotated 40-degrees. The Longines L788.2 is based on the ETA A08.L11 from the Valgranges range of extra-large movements, which are in turn based on the Valjoux 7750. It operates at a frequency of 4Hz and offers a 54-hour power reserve. The ETA A08.L11 is a heavily upgraded version of the Valjoux 7753, with the chronograph mechanism completely reworked to have a column wheel and vertical clutch.

The movement can also be found in a number of other Longines chronographs, including the Pulsometer Single-Button Chronograph and the Column-Wheel Single Push-Piece Chronograph. It is hidden behind a solid titanium case back. The L788.2 is one amongst a handful of movements cost-efficient enough to be found in affordable mono-pusher chronographs, but the Longines Avigation Type A-7 1935 is by far the most unique in the category.

In essence, The Hour Glass edition is an outstanding execution of what already is a very compelling watch that is tastefully designed, and crucially, does away with the date window. And the bronze case is a rather unusual material for Longines.

At 6000 Singapore dollars, it is priced approximately 16 percent more than the standard model, a modest increase given the drastically different look and feel.

Limited edition: 40 pieces each
Availability: Only at The Hour Glass in Singapore
Price: 6,000 Singapore dollars

Based on a 1930s pilot's chronograph, the Longines Type A-7 is striking, unusual, wearable and affordable.

Longines introduces the latest version of its popular Column-Wheel Single Push-Piece Chronograph, featuring a larger case and appealing, vintage-style dials, while retaining the L788 self-winding movement. We take a look at the new trio of chronographs.