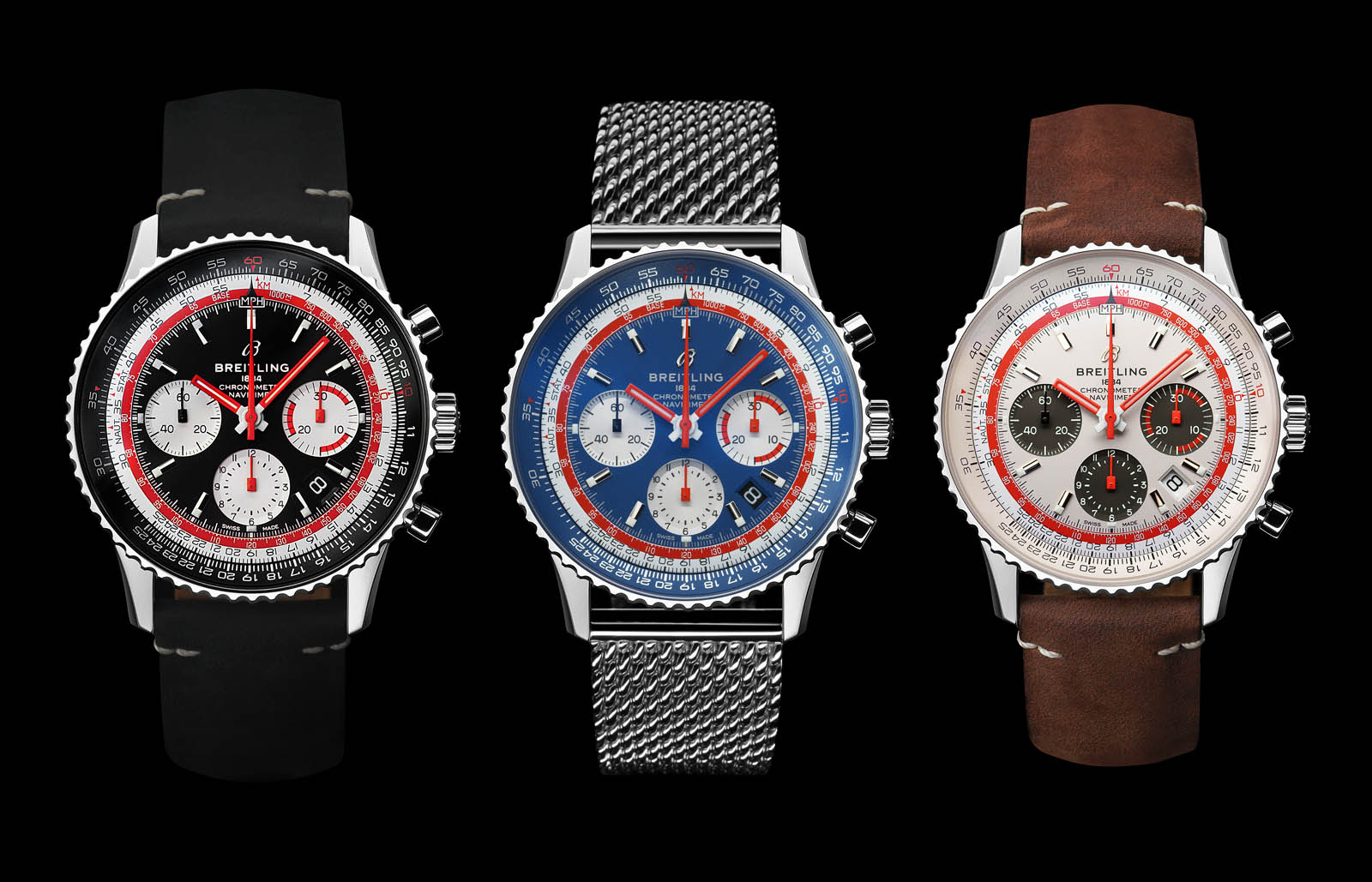 There was once a time when you could keep your shoes on at airport security, and budget airlines had yet to be invented. In hindsight the golden age of commercial aviation was a brief one, just three decades or so after the second world war. Three giants of the jet age were Pan American World Airways, Trans World Airlines, and Swissair, once great airlines that have all gone ignominiously bust.

Breitling has just rolled out its first capsule collection, a trio of Navitimer 1 chronographs with seventies detailing, each a tribute to these airlines, which saw saw their heyday in the same the era that gave birth to the Navitimer. Developed in collaboration with the Aircraft Owners & Pilots Association (AOPA), the Navitimer was kitted out with a distinctive slide rule bezel to aid pilots with inflight calculations, essentially serving as wrist-borne navigation computer. The Navitimer survived to become an iconic wristwatch, but the airlines did not. The Airline Editions are based on the Navitimer 1 B01 Chronograph 43, but with tweaks that lend it a 1970s air. That means wide, baton-shaped hands for the time and sub-dials, as well as broader hour markers and coloured segments on the minute counter. All have a 43mm steel case that contains the Breitling B01 movement, the brand’s in-house automatic chronograph calibre. It’s visible through the display back, which is printed with the airline’s logo.

The collection kicks off with the Navitimer 1 B01 Chronograph 43 Swissair Edition (ref. AB01211B1B1X1), which has a black dial with white registers and red accents, the colours of the Swissair logo. It remembers an airline that was once regarded as one of the best in the world, especially in the 1980s. But Swissair grew through foolish acquisitions in the 1990s, and was finally taken down by the September 11 attacks. It went bust and is not related to the Swiss International Air Lines of today, better known as Swiss, which is now the country’s national airline. Next is the Navitimer 1 B01 Chronograph 43 Pan Am Edition (ref. AB01212B1C1A1), the most distinctive of the trio thanks to its pale blue, red and white livery. The watch was inspired by an airline that was once the largest in the world until the 1970s. Pan Am was the first buyer of the Boeing 747, and its headquarters in New York City was the biggest office building in the world when completed in 1963. But after struggling for several decades, it finally went under in 1991, though its logo has become a popular emblem for retro luggage and objects, being evocative of another era of airline travel.

The last watch in the collection is a nod to America’s other flag carrier once upon a time, Trans World Airways (TWA). The Navitimer 1 B01 Chronograph 43 TWA Edition (ref. AB01219A1G1X2) has a silver dial, grey sub-dials and red accents. Like Pan Am, TWA started foundering in the 1980s, and went bankrupt for the third and last time in 2001. Each Airline Edition is available on a leather strap or steel mesh bracelet. All three will be will be produced for a limited time, but are not a numbered, limited edition. They’ll be available at Breitling boutiques and retailers starting April 2019.

Prices are yet to be announced, but the ordinary versions of the Navitimer 1 B01 cost US$8590 on a leather strap, so expect these to be priced similarly.