Launched last year alongside the time-only Tonneau, the Privé Tonneau Skeleton Dual Time is classical Cartier in style and execution.

The case is a century-old Cartier design that has not aged, while the movement is interesting in aesthetics and mechanics. In fact, the 9919 MC inside is surprisingly novel – it’s a skeleton, form, and curved movement with two time zones. The Tonneau Skeleton is also being produced in a modest limited edition, which means it will remain unusual. But it is hindered by a high price tag. 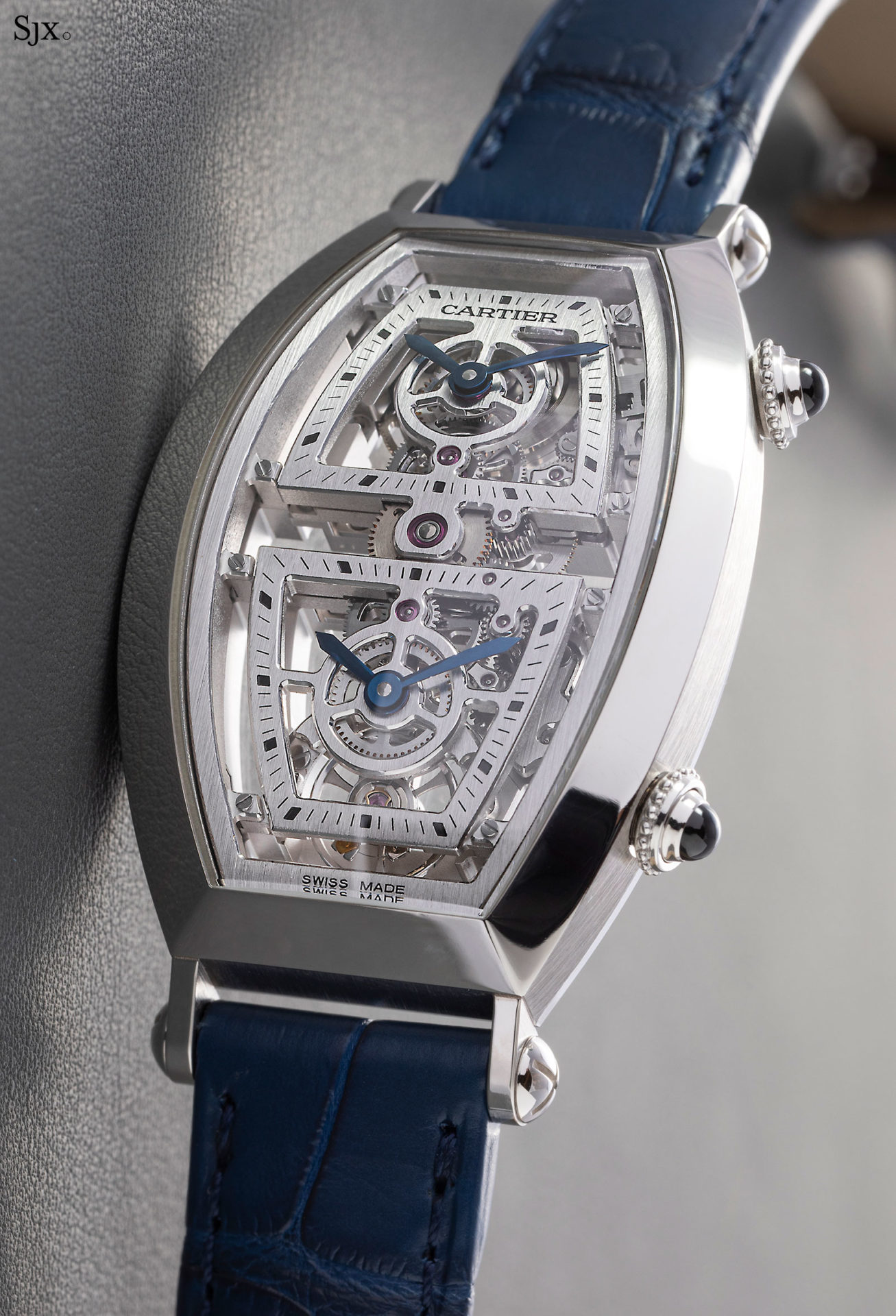 The Tonneau Skeleton Dual Time is modelled on the Tonneau double fuseau (French for “double time zone”) that was produced in a variety of versions, including a 1999 Macau handover commemorative edition, from the 1990s until the mid 2000s. 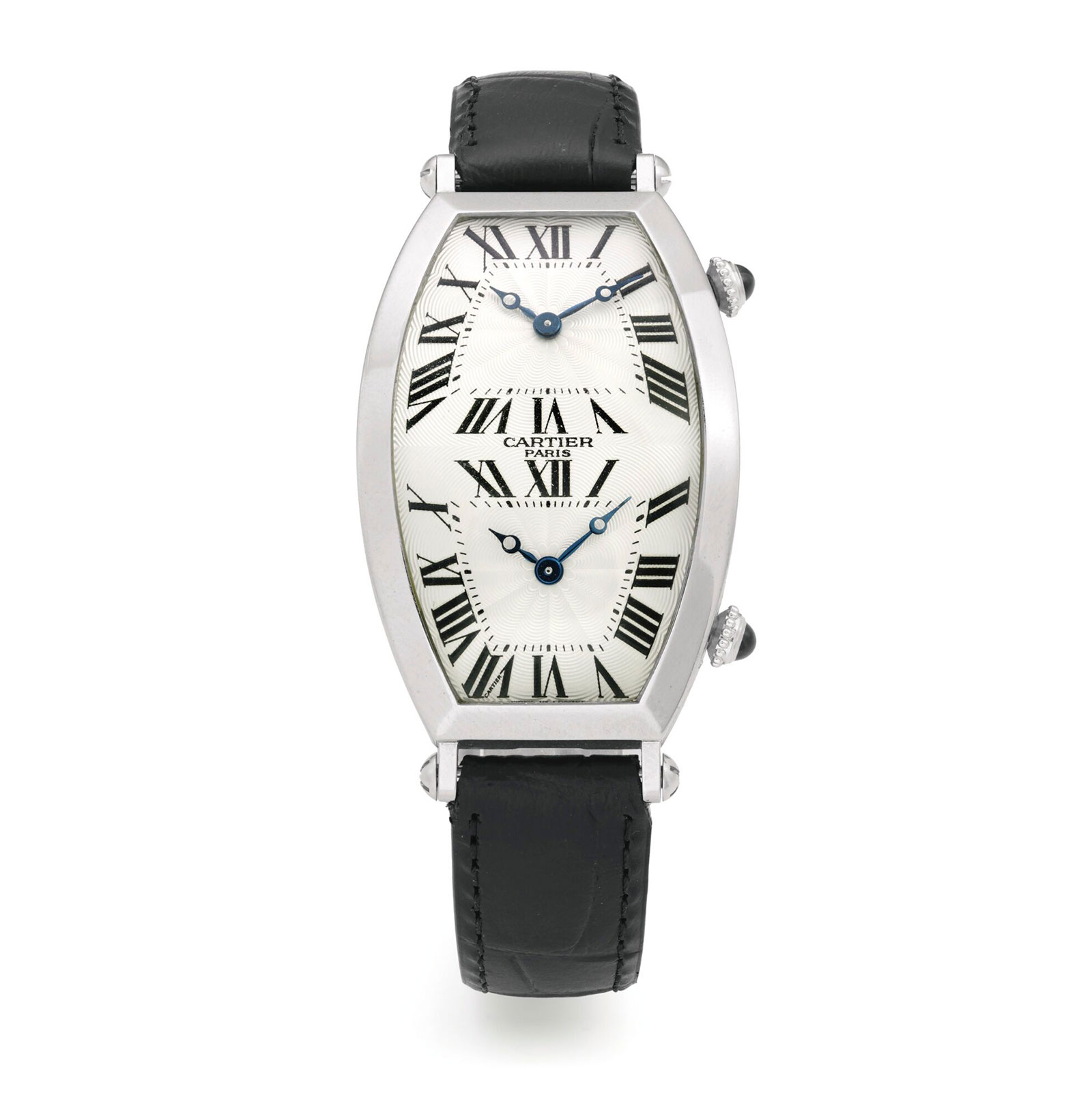 Cartier was particularly fond of the twin time zone complication during the period, and the double fuseau was also produced in many Tank case styles, ranging from the Tank Cintree to the Tank Louis Cartier.

Despite the diversity, all the double time zone watches shared a common feature – they were powered by two separate small movements – either mechanical or quartz, depending on the model – essentially two tiny watches combined into an extra-large case. Though mechanically unsophisticated, the two-in-one construction made each time zone entirely independent, down to the minute.

The Tonneau Skeleton Dual Time, on the other hand, is a proper dual time zone watch, powered by a single movement with two time displays, the 9919 MC. Because it’s a single movement, both minute hands are synchronised, so the second time zone can only be set in one-hour steps. As a result, it can’t be used in countries with 30 -or 45-minute time zone offsets, but the impact on practicality is limited since such locations are few and typically rarely visited. 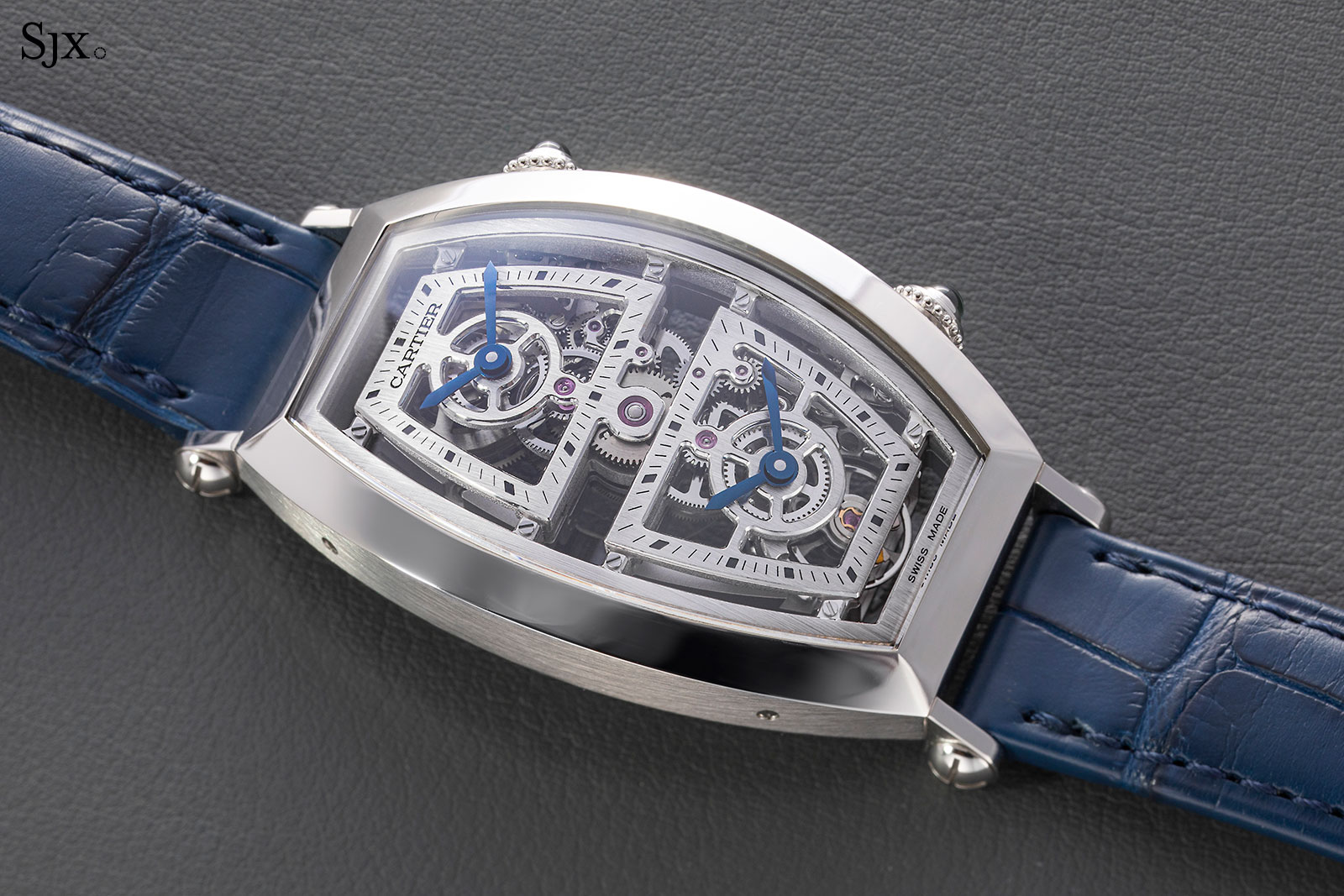 In terms of function, the Tonneau Skeleton is straightforward to understand and operate.

The upper crown is for winding, as well as setting both time zones simultaneously. But the lower crown is actually a pusher: it advances the hour hand on the second time zone forwards by one hour.

Though the sub-dials are unlabelled, the set up of the watch means the the upper sub-dial shows home time, while the lower sub-dial indicates local time. 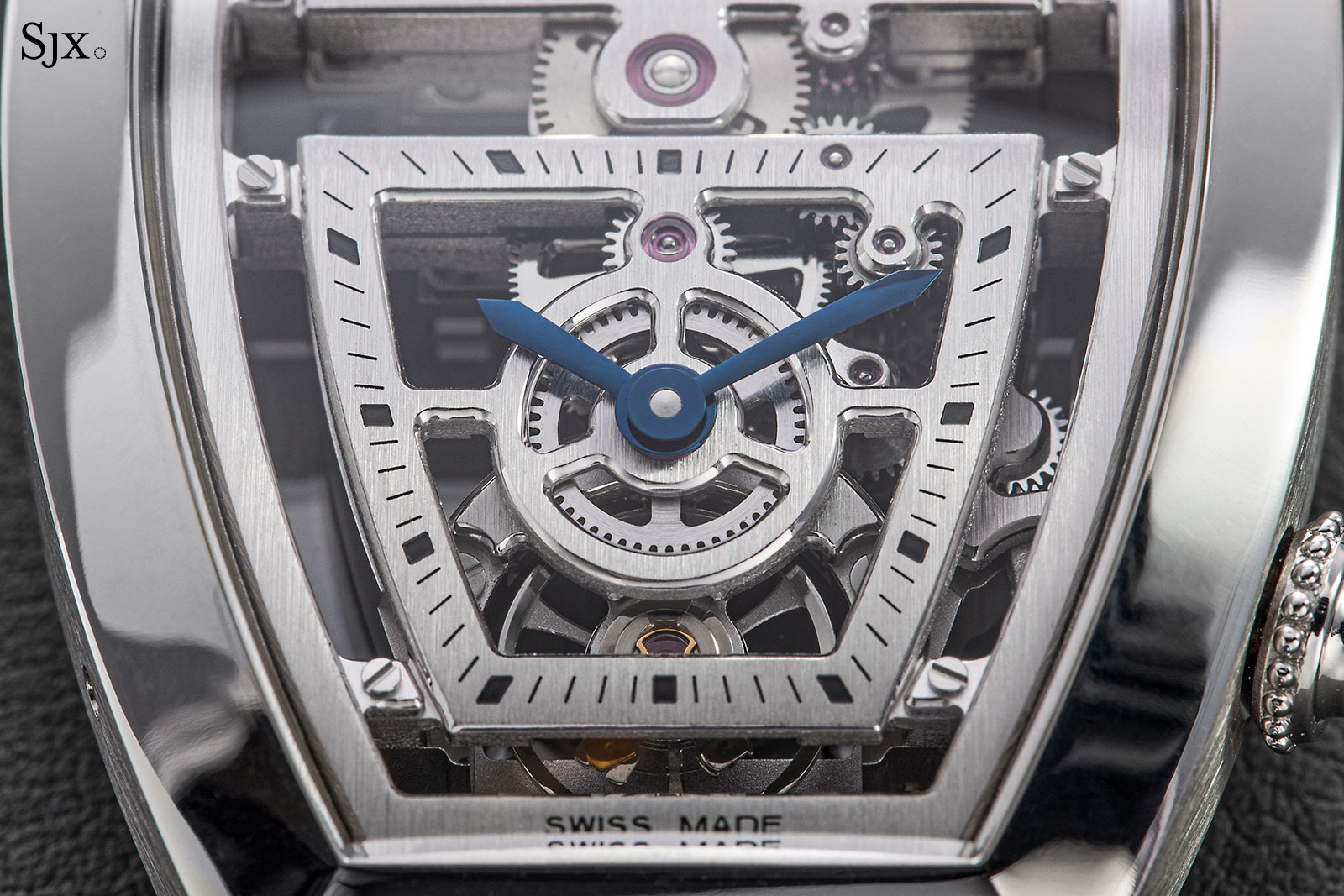 The shape of the Privé Tonneau Skeleton Dual Time is a familiar one – Cartier made its first tonneau wristwatch in 1906. But the Tonneau Skeleton has been bulked up and sharpened, giving it a more modern and masculine feel.

On the wrist, the Tonneau Skeleton is big but sized just right. Cartier’s tonneau shape looks slightly feminine  as a result of its proportions, so the case has to be extra large to work as a man’s watch.

While the size and shape are perfect, the strap is narrow – inevitable given the case style – which is reminiscent of a lady’s watch. 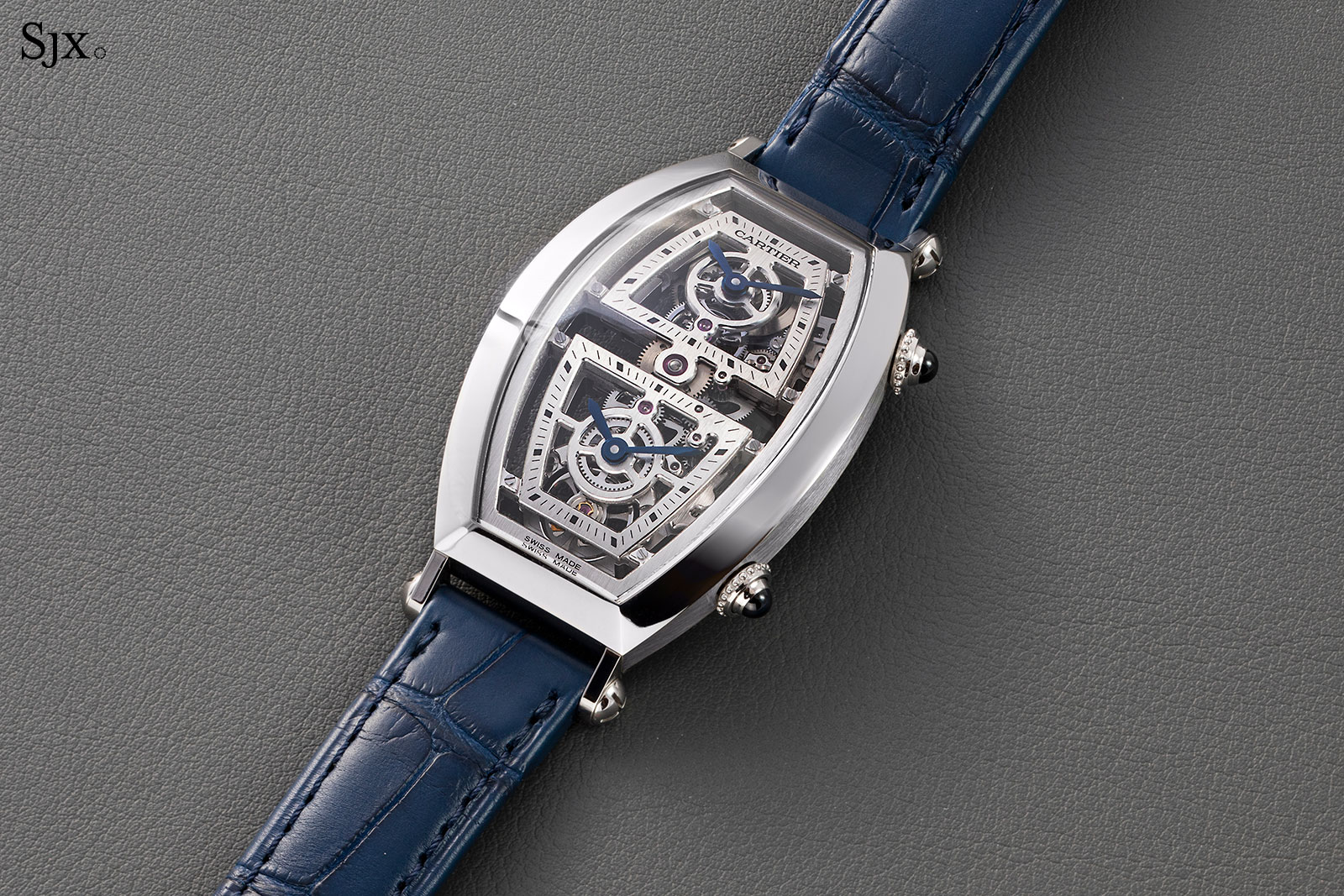 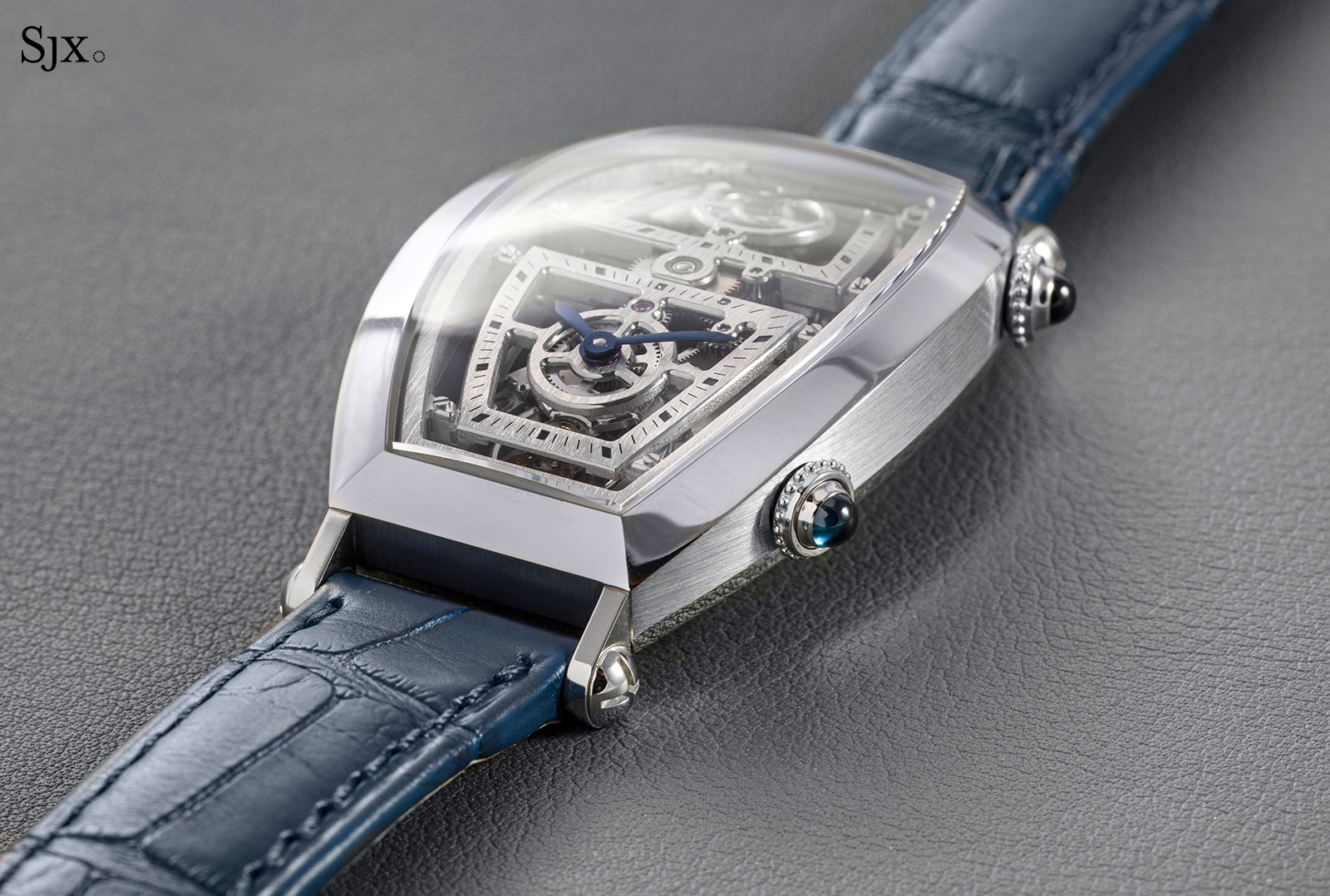 The Tonneau Skeleton is 29.8 mm in diameter and 52.4 mm long, making it sizeable enough to be a good-sized man’s watch. It’s approximately the same diameter as the CPCP tonneau dual time of a decade ago, but significantly longer, and as a result looks quite a bit larger.

And it’s only 11.9 mm high at its tallest, which is slim enough to give it an graceful shape on the wrist, particularly because of the prominent curve and tapered profile of the case. 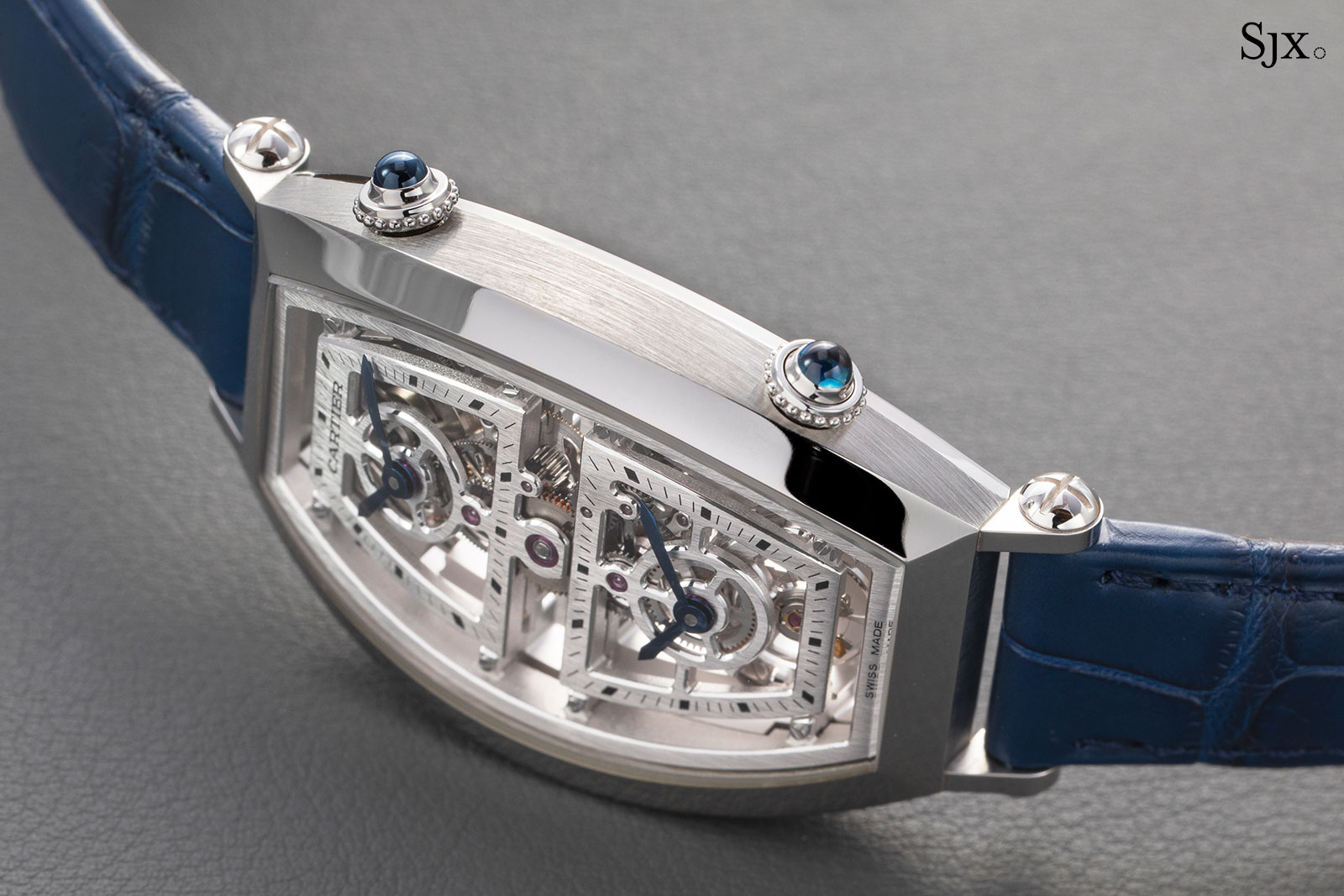 Not only is the watch larger, the proportions have been tweaked ever so slightly relative to earlier Tonneau models. The bezel is wider, with more pronounced corners. Similarly, the crowns are larger, as seemingly so are the screws on the lugs. Together, they give the watch a more contemporary aesthetic.

Though the case shape is relatively simple, it is well finished, with contrasting brushed and polished surfaces that give it a more refined look. 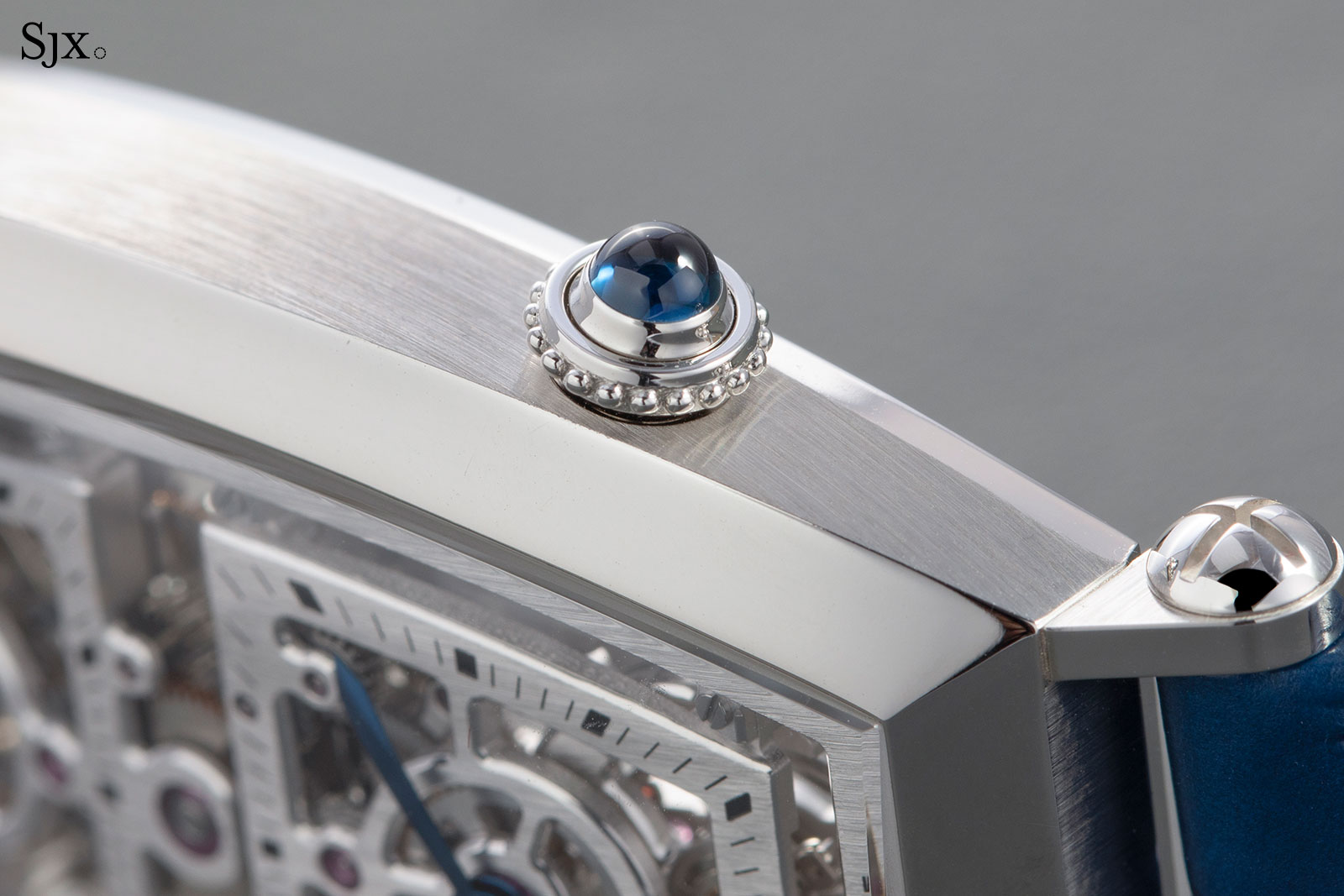 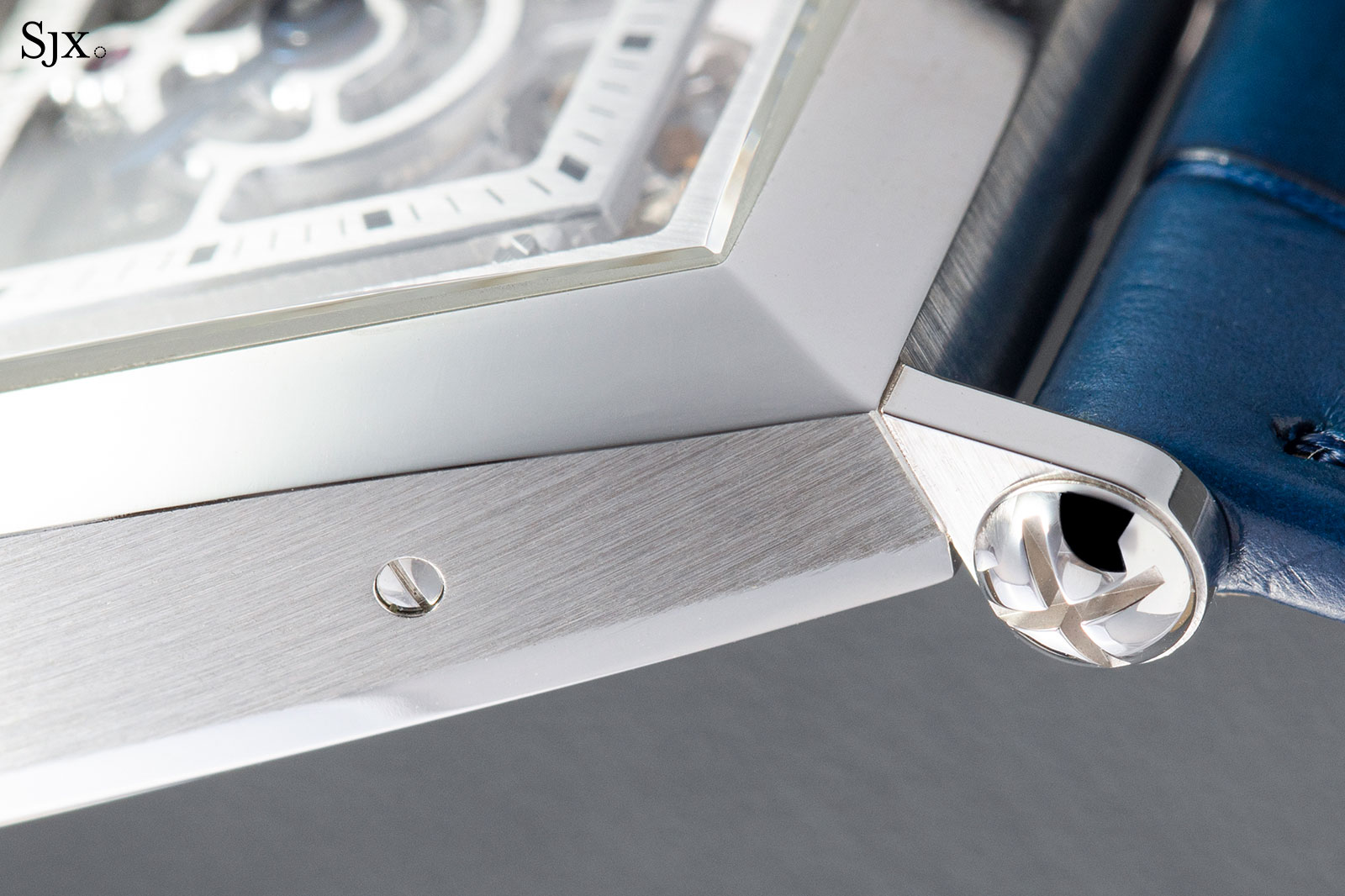 Note the precise brushed finish against the polished surfaces

Developed and produced in-house by Cartier, the 9919 MC is an impressive movement but probably one of the last few such movements as a result of Cartier’s current emphasis on jewelled and simpler watches, instead of complicated ones.

It’s a special movement on several levels. To start with, the 9919 MC is an open-worked, form movement that echoes the shape and size of the case exactly. In fact, the movement is not just tonneau-shaped, but it is also gently curved to match the profile of the case. 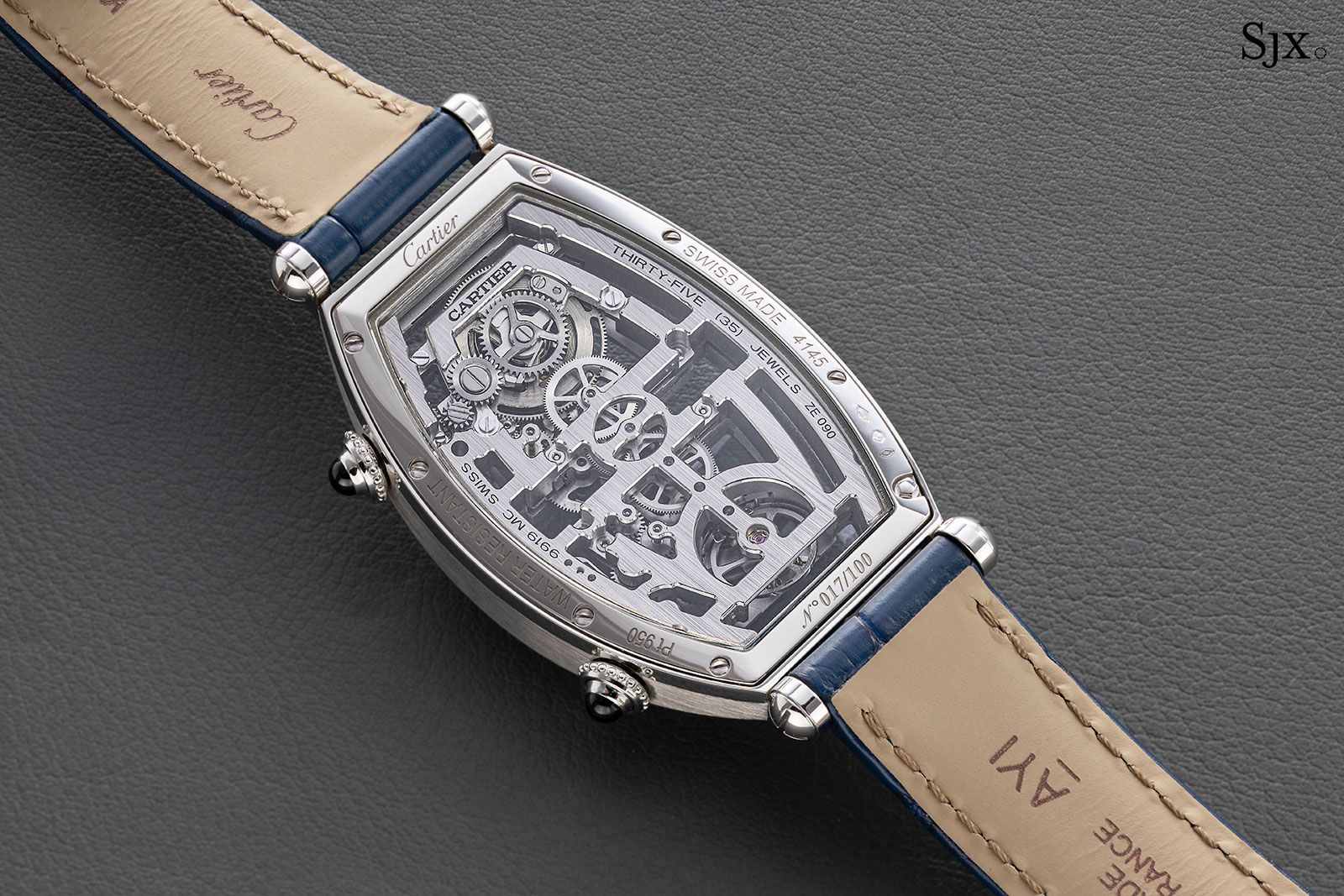 The movement is curved, but only by a few degrees, making it imperceptible at a distance. Both the bridges on the back and the base plate on the front trace the curve of the case, requiring the crown wheel and barrel ratchet as well as the going train wheels to mesh at a gentle angle. And because of the case shape, the wheels on the dial side are slightly more angled than those on the back. 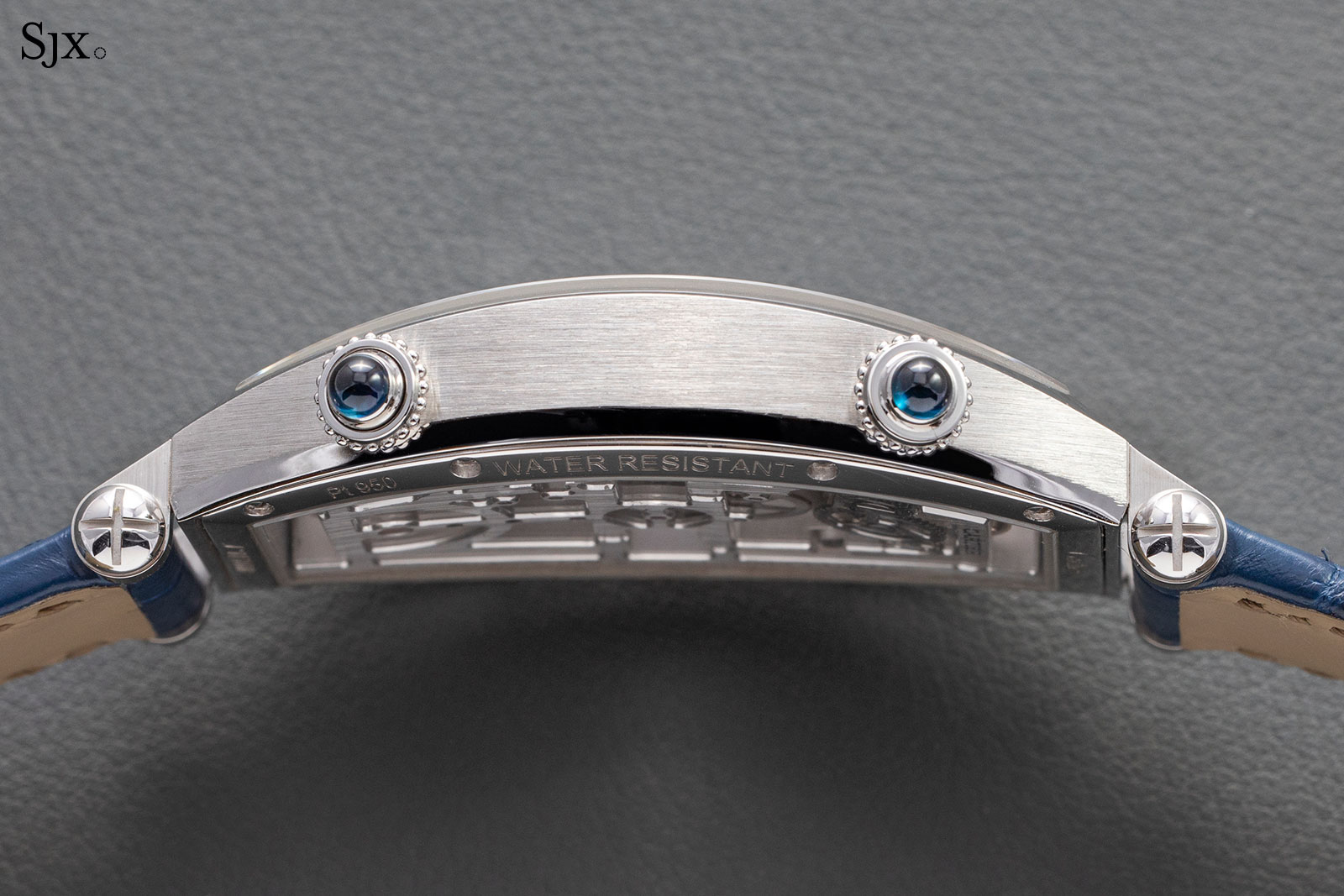 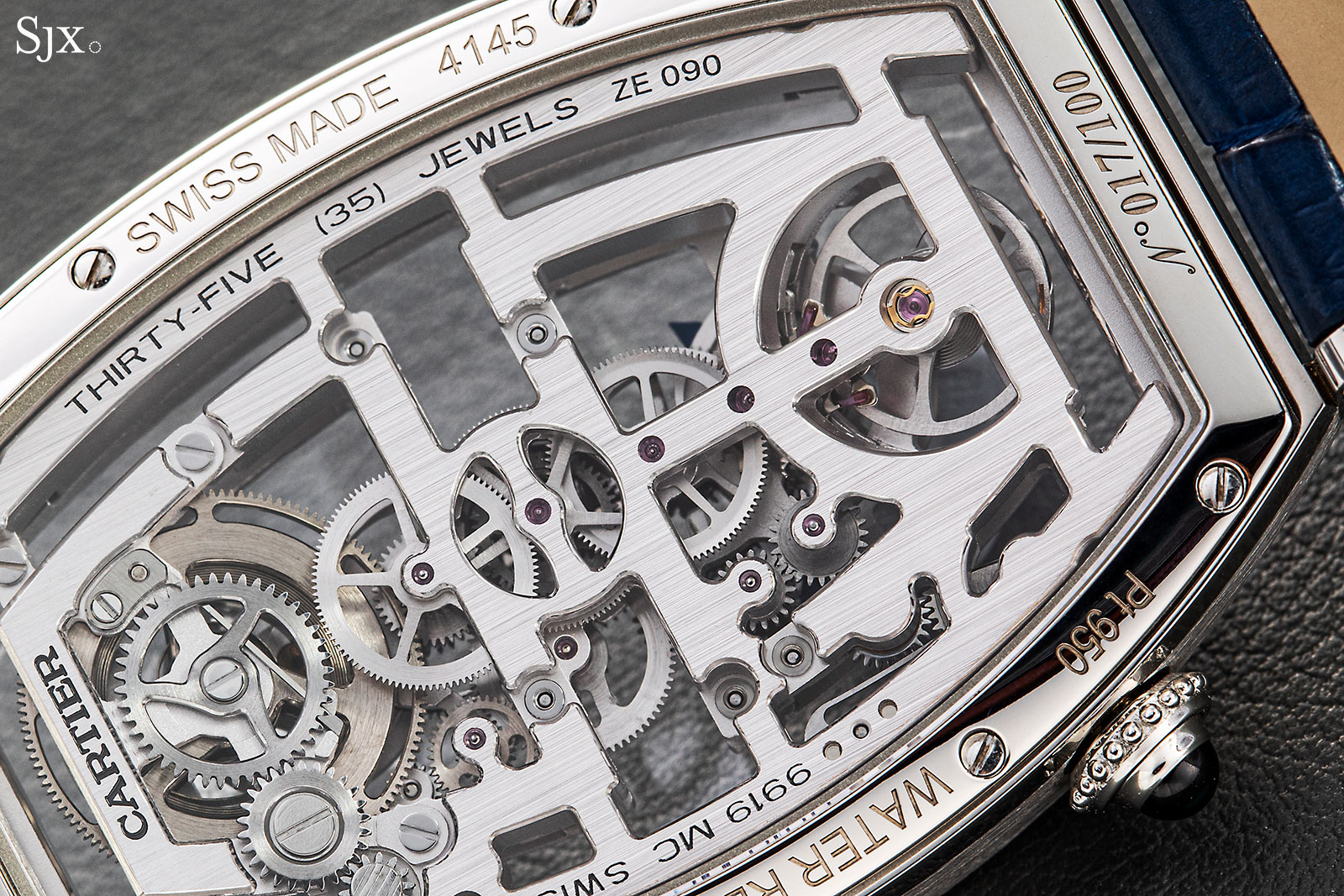 The curve of the movement is subtle, but obvious when observing the incline of the balance wheel relative to the plate

Stylistically, the open-working relies on geometric shapes, giving the 9919 MC a modern appearance that is the house style for Cartier skeleton watches.

The 9919 MC also features a neatly symmetrical construction, along with twin gear trains on the front to indicate two independent time zones.

From the back, the symmetry of the movement is obvious. The barrel sits at 12 o’clock, with the crown and winding wheels on one side leading off to the crown. It’s followed by the gear train, arranged in a straight line, ending at the balance wheel and escapement at six o’clock.

Over on the dial side, but not entirely visible due to the chapter rings, are the pair of indirect trains that drive each time display. 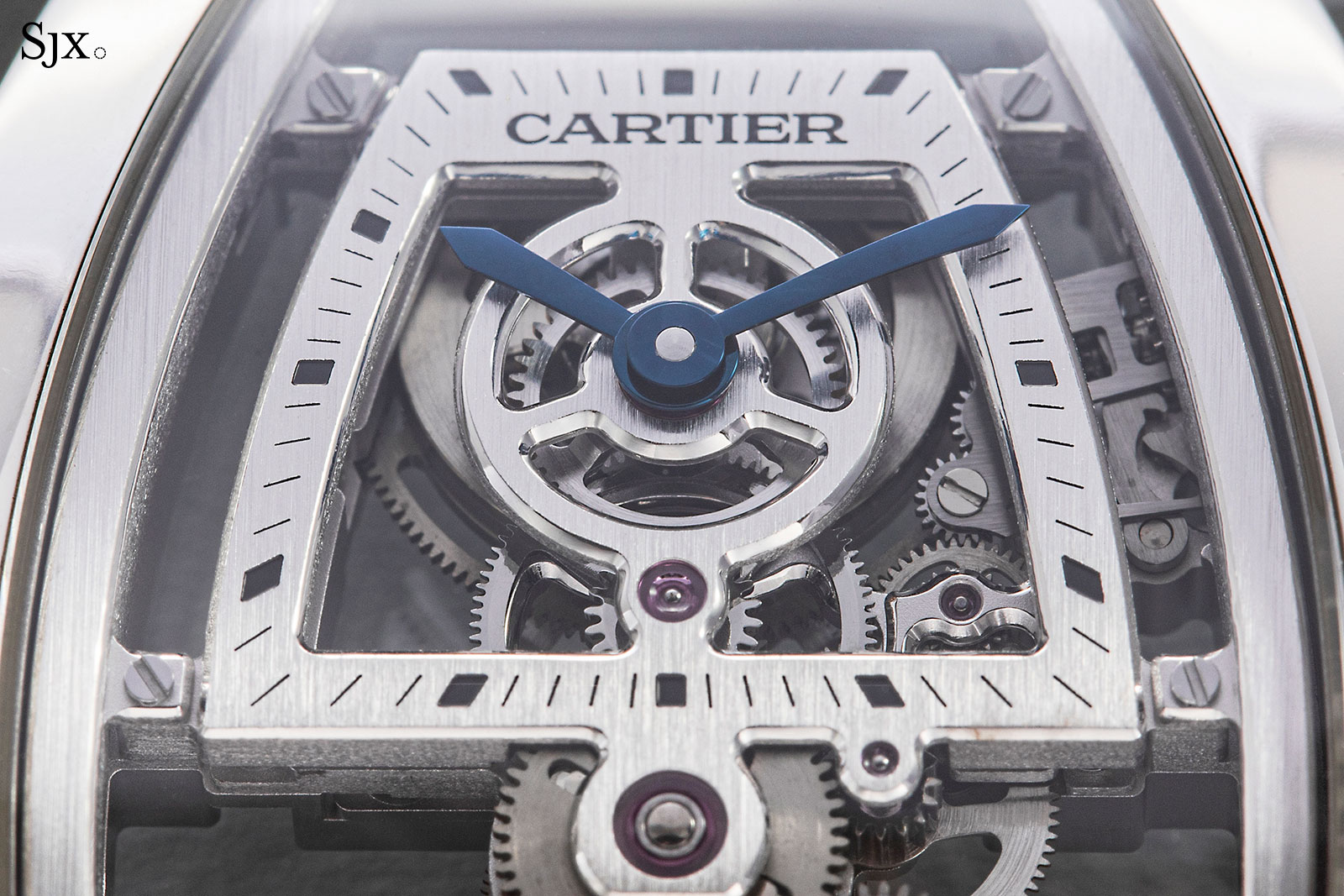 The symmetry of the movement is especially appealing because it is open-worked; with the gears concentrated in a column down the middle of the calibre, the watch has a notably airy look. 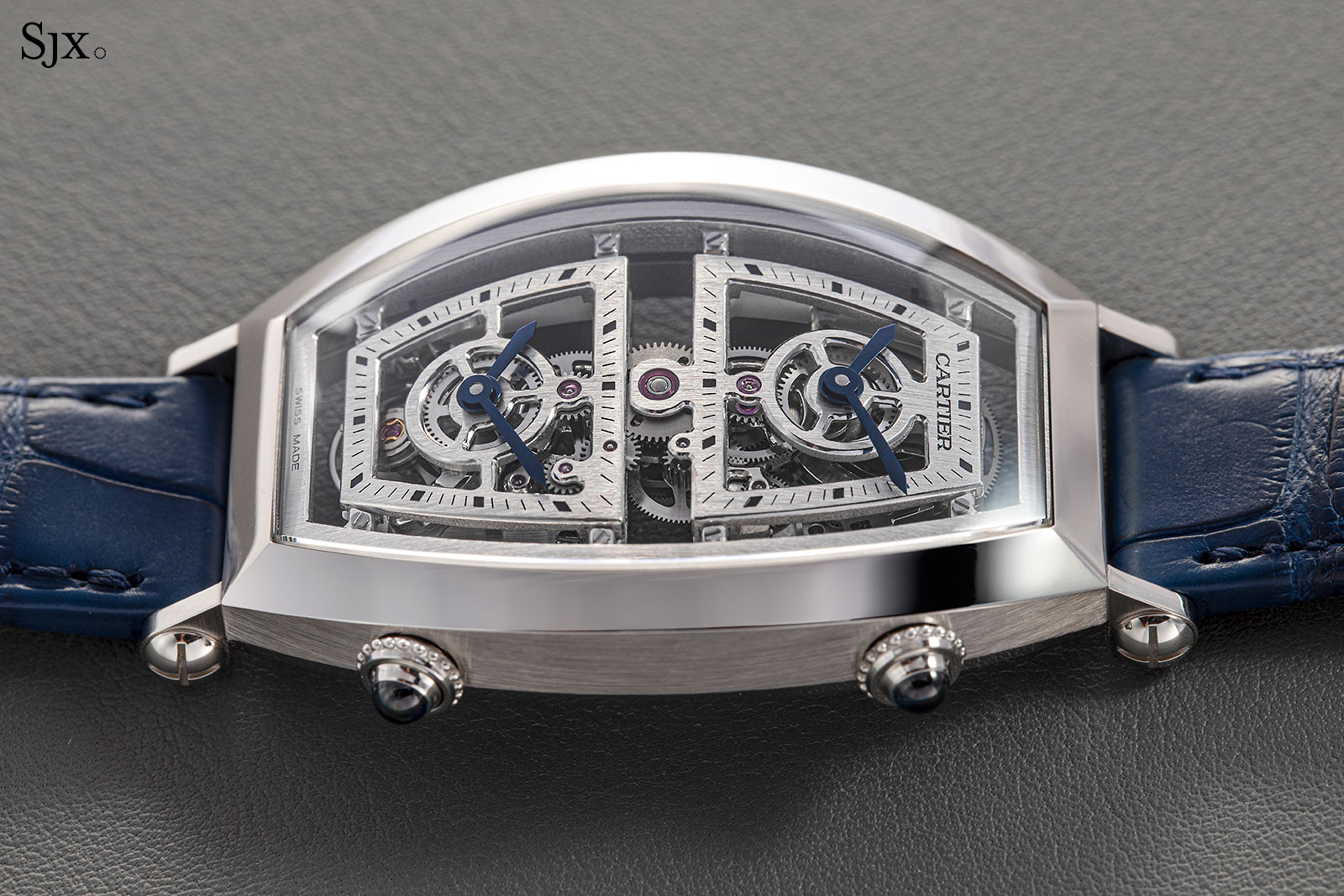 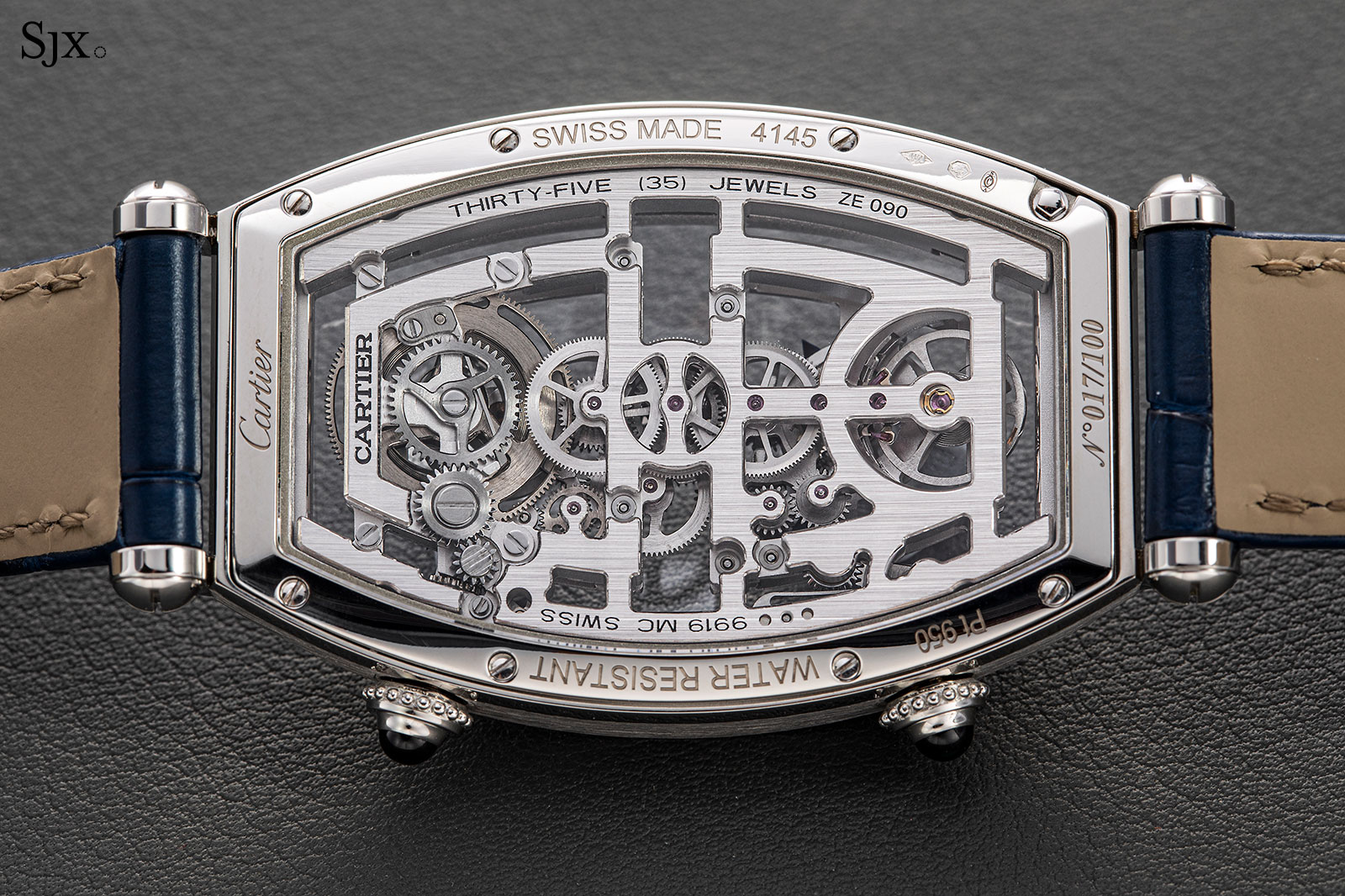 Fit and finish, strengths and weaknesses

In terms of decoration and details, the 9919 MC has the usual strengths and weaknesses of Cartier’s high-end movements. The finishing is attractively and neatly done, creating a clean, monochrome look that suits the case style and finish, but not artisanal.

The top surfaces of the bridges are straight grained, outlined by contrasting, polished bevels. Wheels are circular grained, with a handful having chamfered edges and spokes. 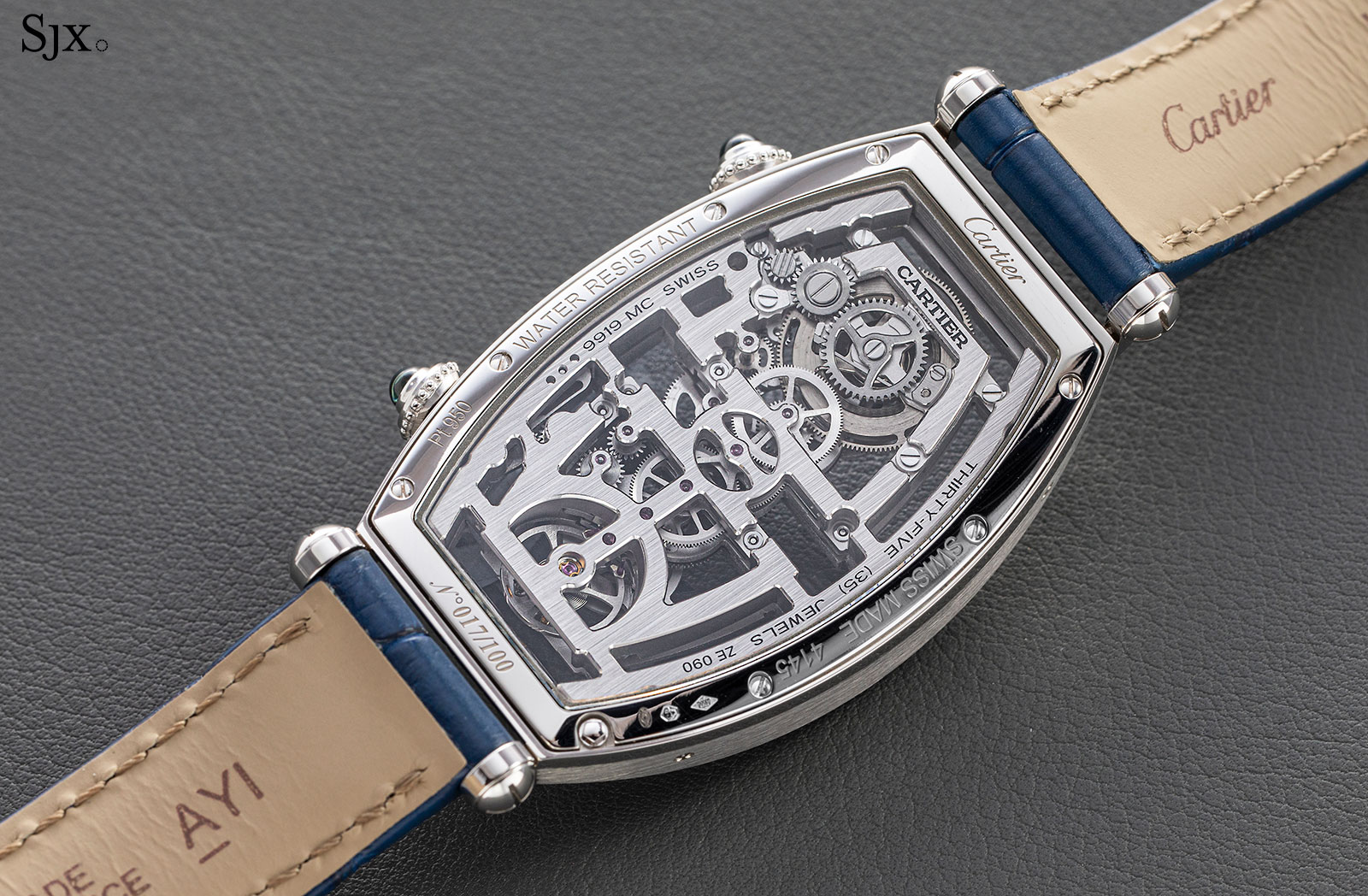 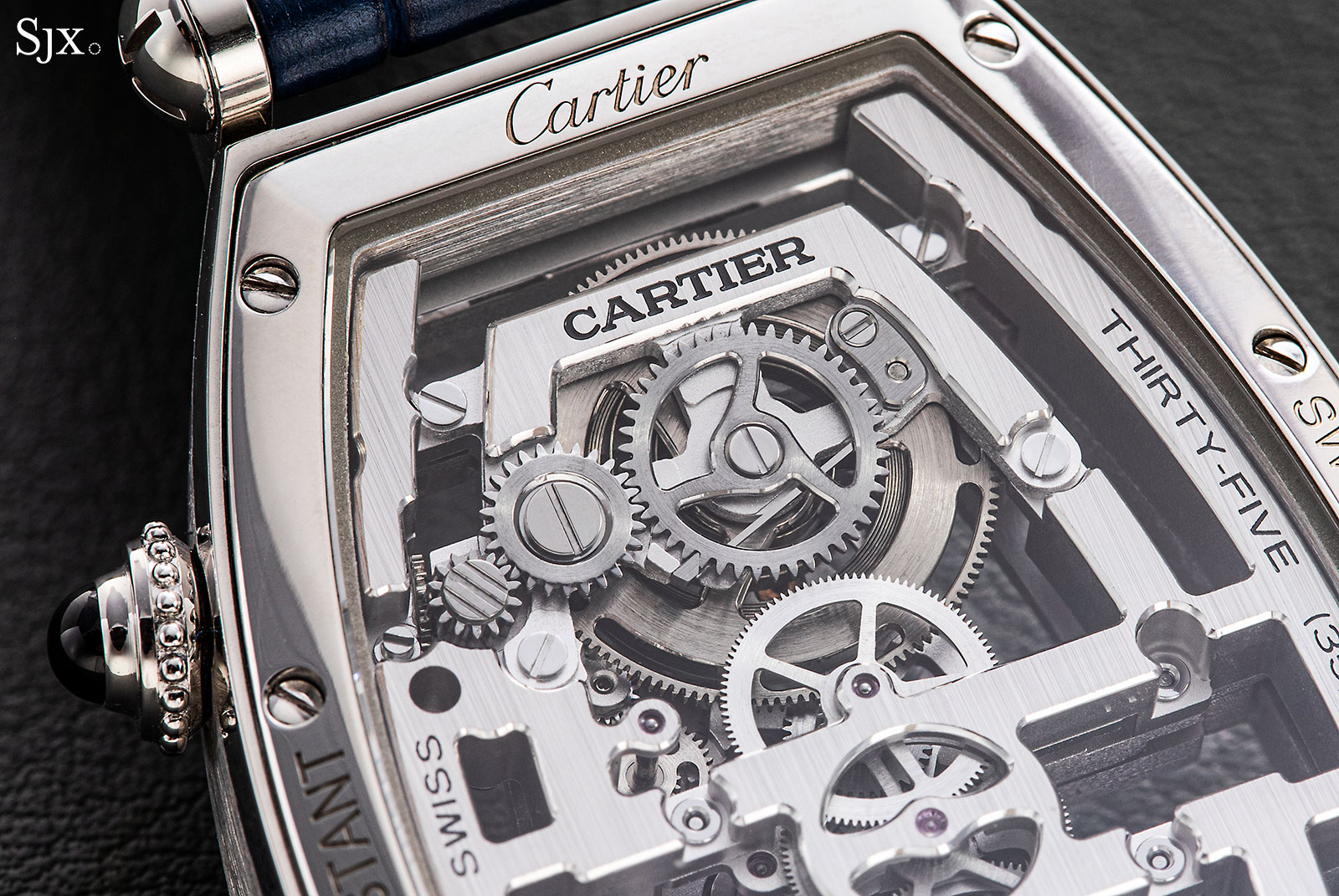 While the bevelled edges are precisely executed, they have rounded corners, rather than the sharp, inward corners of artisanal finishing. But in mitigation, the number of angles within the movement no doubt render hand-polished inward angles unviable. 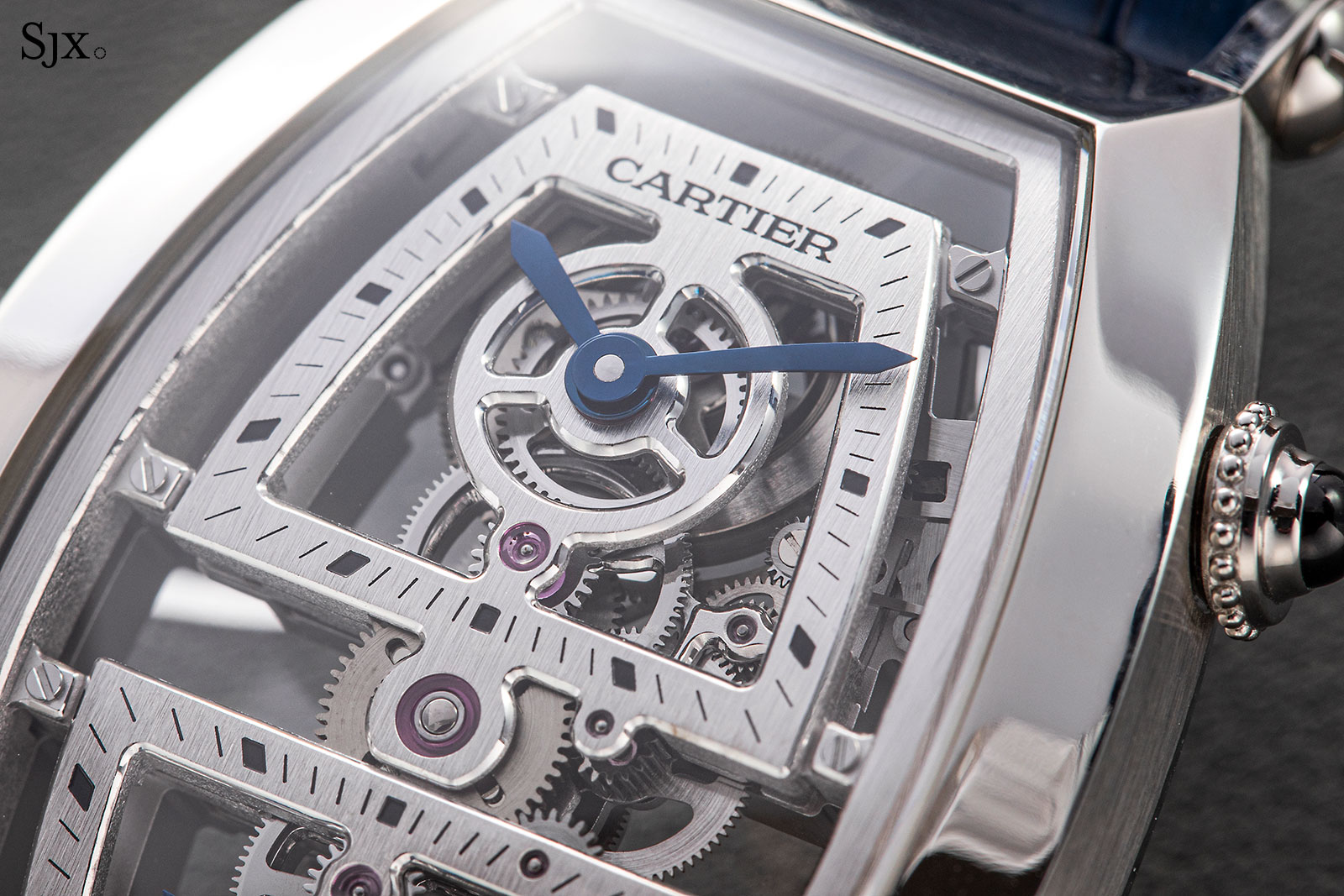 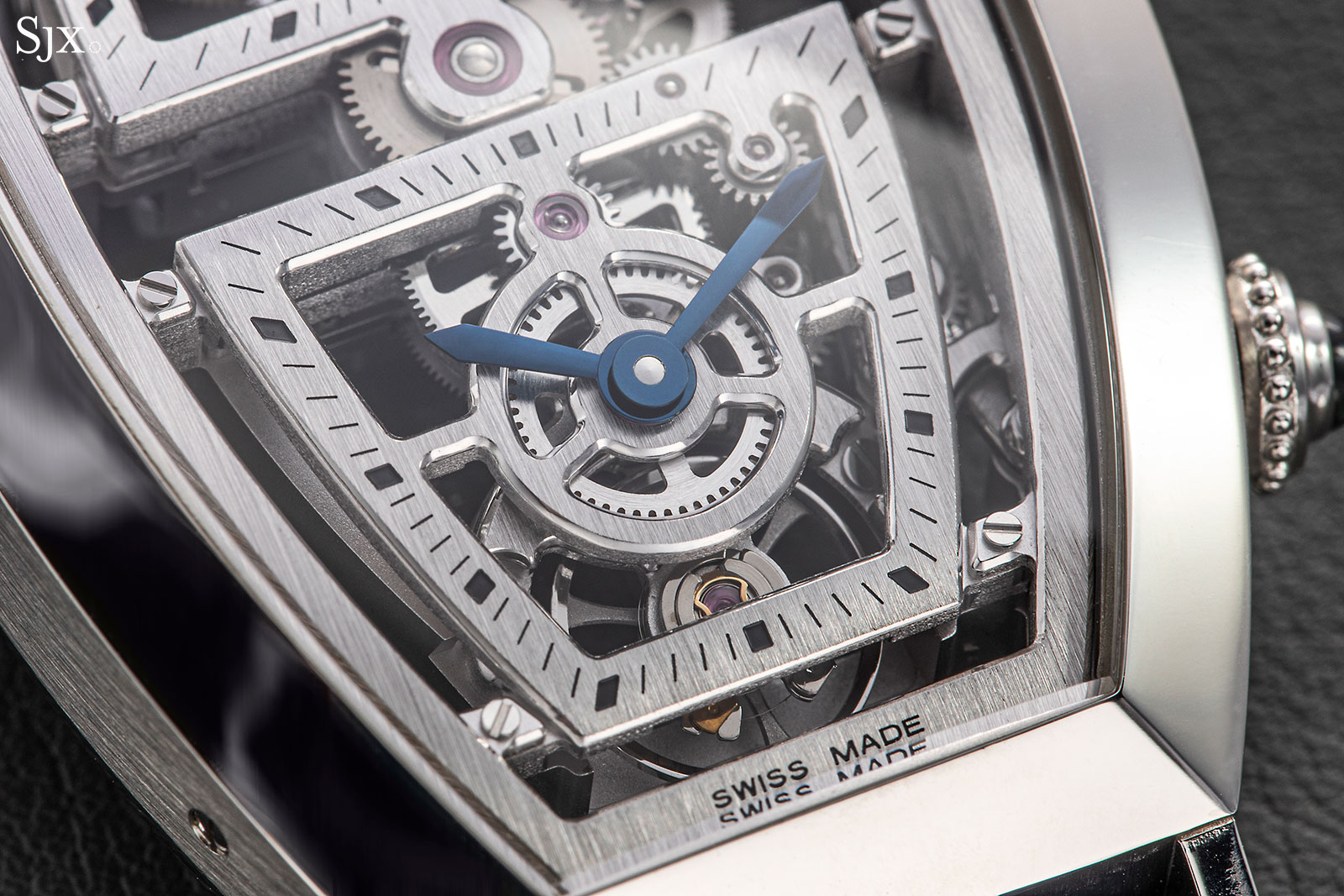 Another feature common to Cartier movements is the Etachron regulator index, which is barely visible here, but still there. It’s typically associated with lower-cost movements – which the 9919 MC is decidedly not – and for that reason looks out of place.

Overall, the movement is still strongly appealing, both visually and conceptually.

The Tonneau Skeleton is available in 18k rose gold or platinum. Though both are identical in every way save for material and colour, they are strikingly different. 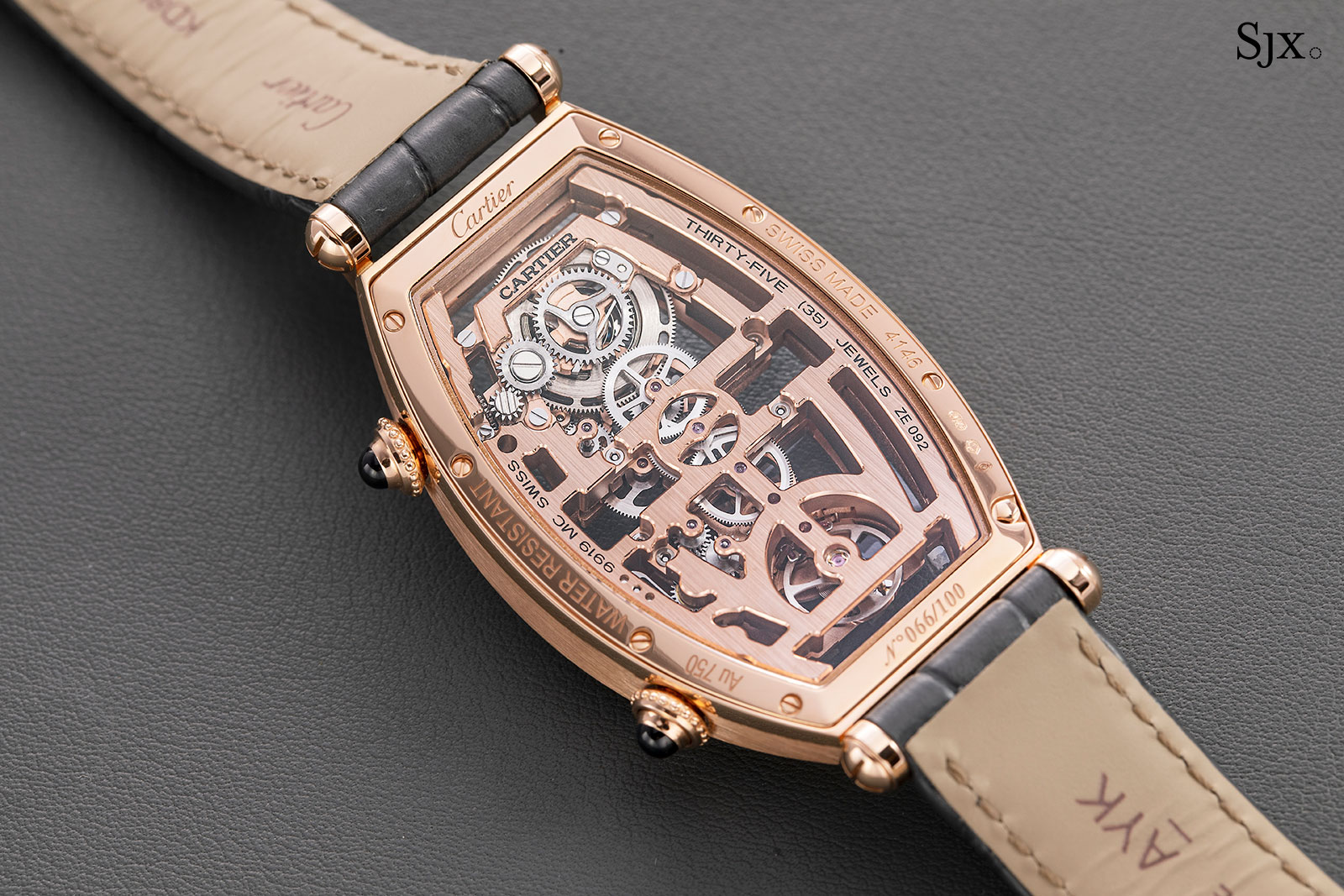 My pick is the platinum, which is calm and restrained. The rose gold is arguably a better buy, costing about 15% less (though the watch is pricey enough that probably doesn’t matter). 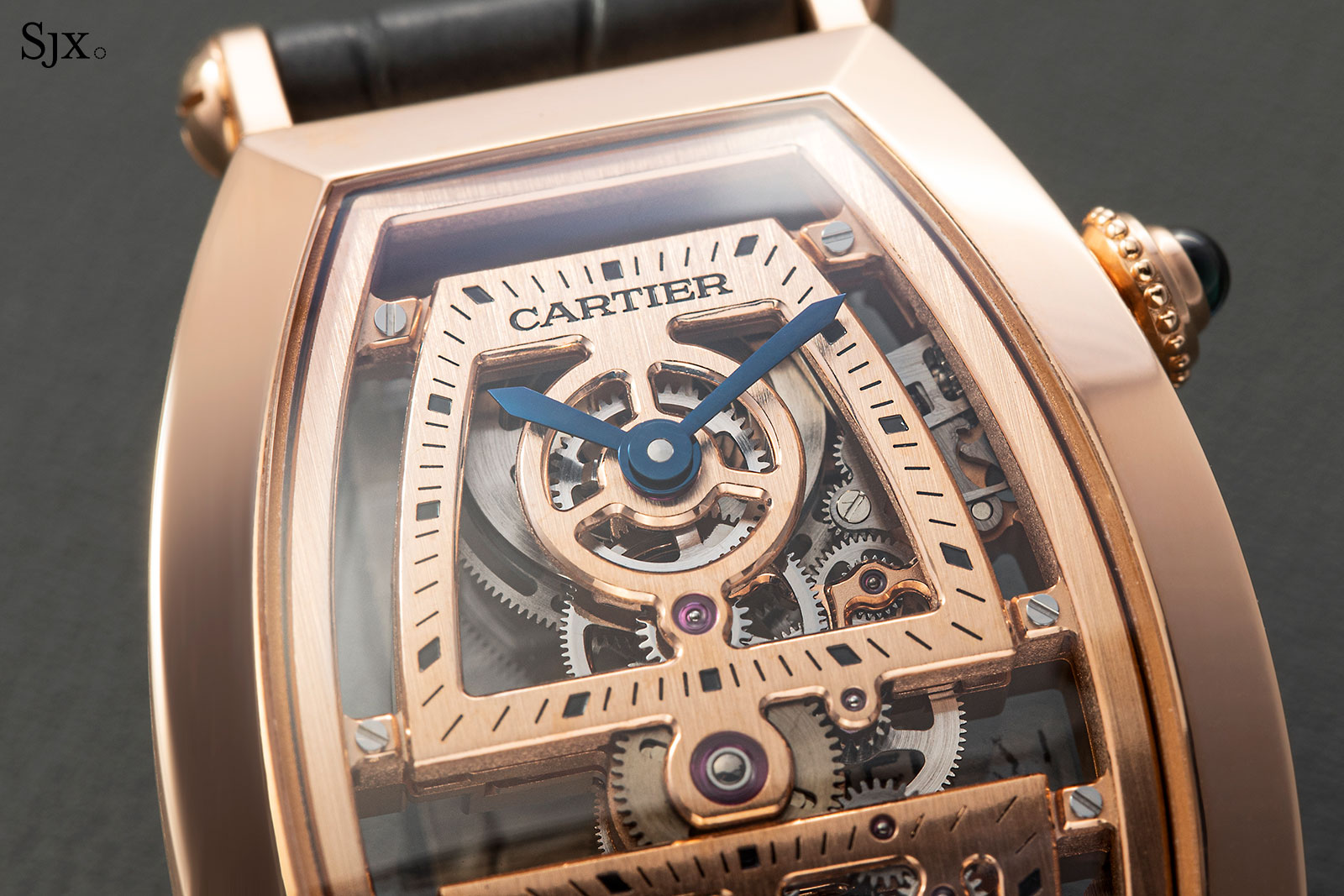 The Tonneau Skeleton is a beautifully designed watch with an appealing movement (excepting the Etachron regulator). And the limited edition – 100 pieces in each metal – is small enough that it will remain fairly uncommon.

But the watch is hindered by an overly ambitious price. With the platinum model priced at just under US$80,000, the Tonneau Skeleton does not score well on its price-performance ratio.

Update March 2, 2020: The upper crown sets both time zones simultaneously, and not just the upper sub-dial as implied in an earlier version of the article.