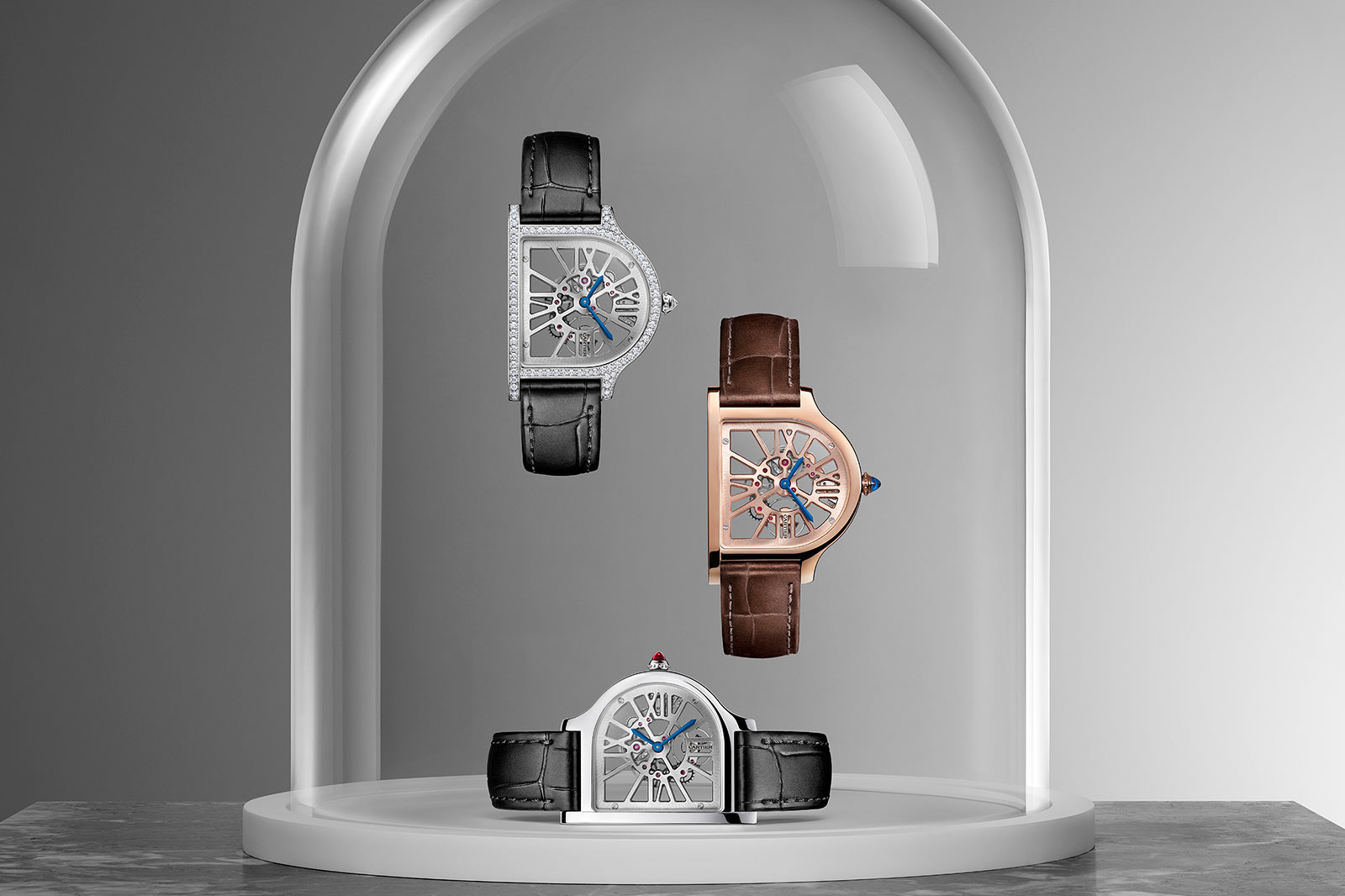 Starting four years ago, Cartier has utilised the Privé collection to relaunch many of its most classic designs, typically in small production runs. It started with the Crash Radieuse in 2017, which was followed by the Tank Cintrée, Tonneau, and last year’s Tank Asymétrique. Not unexpectedly, Cartier has continued this with the Cloche de Cartier, in both skeletonised and traditional formats.

Though the form is novel, the Cloche is a long-established case design for the Parisian jeweller. Its asymmetry allows it to double up as a small desk clock, with the flat side of the case resting on the desktop.

The shape made its first appearance as a wristwatch in 1921, with a platinum case set with diamonds according to Cartier. Reputedly inspired by the shape of a service bell – cloche is French for “bell” – the Cloche remained in production, albeit in tiny numbers, until a relaunch as a quartz watch in the Louis Cartier collection. The two most recent iterations of the Cloche came in 1995 and 2007, the first a limited run of 200 in yellow gold, the second 100 in yellow gold as part of the Collection Privee Cartier Paris (CPCP). 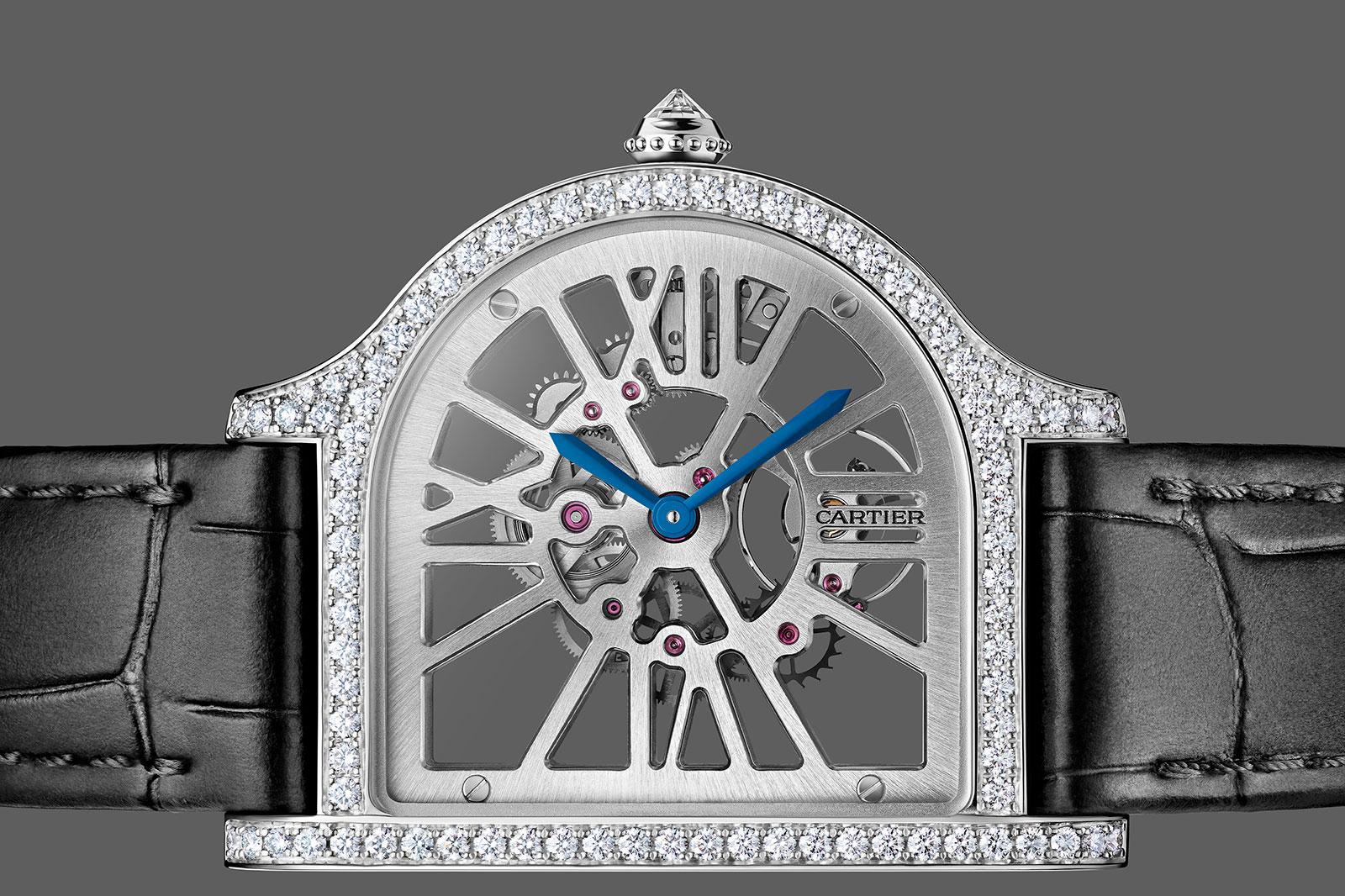 The watches of the Privé collection – Cloche, Crash, Tank Cintree, and Tank Asymétrique – exemplify what Cartier does best. To call these watches unconventional would be an understatement – they were radical when they each made their debut, and they speak to Cartier’s visionary and experimental house style. I love the Cloche; though it is inherently a vintage remake, its unique shape is fresh, standing in contrast to what feels like endless exceedingly derivative offerings.

However, originality comes at a hefty price. In keeping with past Privé models, the premium demanded for the skeletonised model against the standard version is substantial – the Cloche skeleton retails for more than double.

The Cloche skeleton will be available in three variants: pink gold, platinum, or platinum with diamond-set case, crown, and buckle.

All share the same case that measures 37.15 mm by 28.75 mm, relatively compact by modern standards. The case is finished entirely in high polish except for the flat case flank at six o’clock (which is nine o’clock in a conventional watch) that has a brushed finish. That’s where one would rest the watch when using it as a desk clock, and the finish is presumably to hide scuffs or scratches. 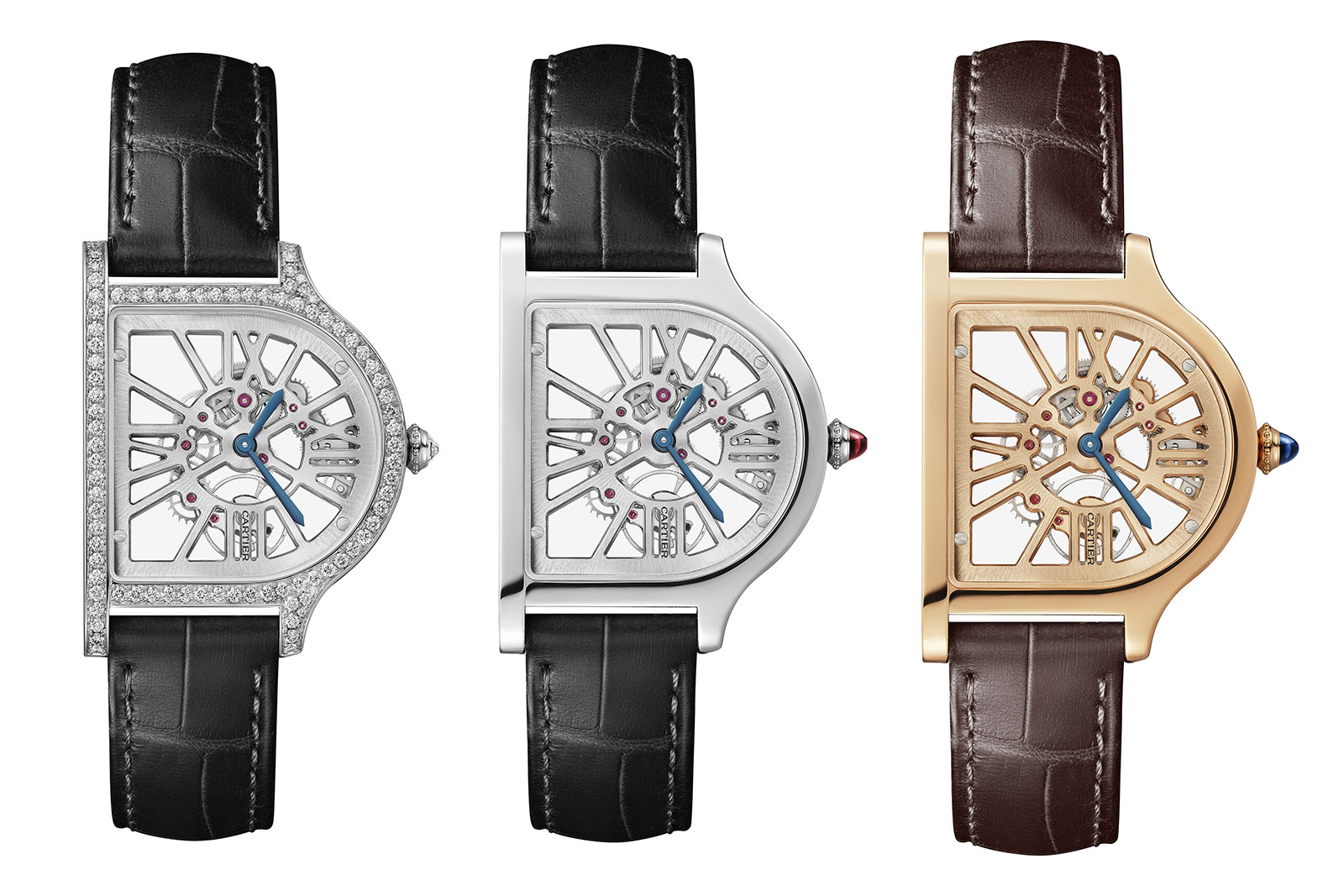 Despite its unconventional case, the Cloche has conventional lugs with straps secured by spring bars. Aficionados of strap swapping will no doubt be delighted to learn that, and I imagine the watches will look splendid on a navy or burgundy shell cordovan strap. 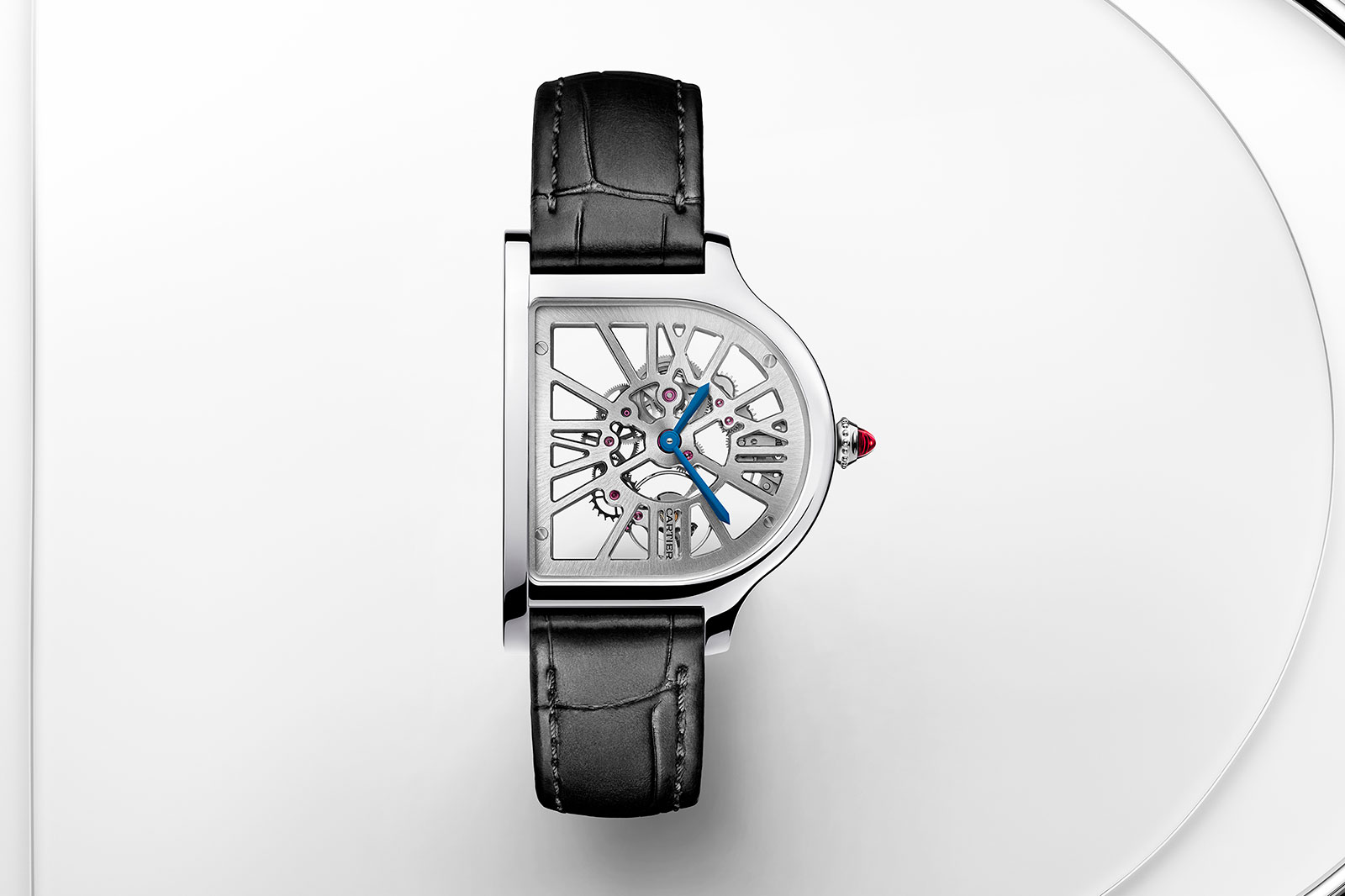 The Cloche in platinum has a ruby cabochon in the crown

Though the size of the watch gives it a vintage feel, the skeletonisation gives it a wholly modern look. As is convention for Cartier skeleton movements, the base plate and bridges of the 9626 MC (which is the open-worked variant of the 1917 MC) forms the dial, with the components skeletonised to form Roman numerals and baton hour markers (with the time indicated by sword-shaped hands in blued steel, as is tradition).

Even compared to restrained size of the Cloche, the 9626 MC is a small movement, just 4.69 mm in diameter. This results in the watch feeling airier than past skeleton Privé models, with the moving parts of the movement clustered around the axis of the hands.

The movement is cleanly, though somewhat plainly, finished – the bridges are radially brushed and the bevels are wide and mirror polished, but likely done with a CNC machine. Given the price, a more elaborate interior decor would have been justified. 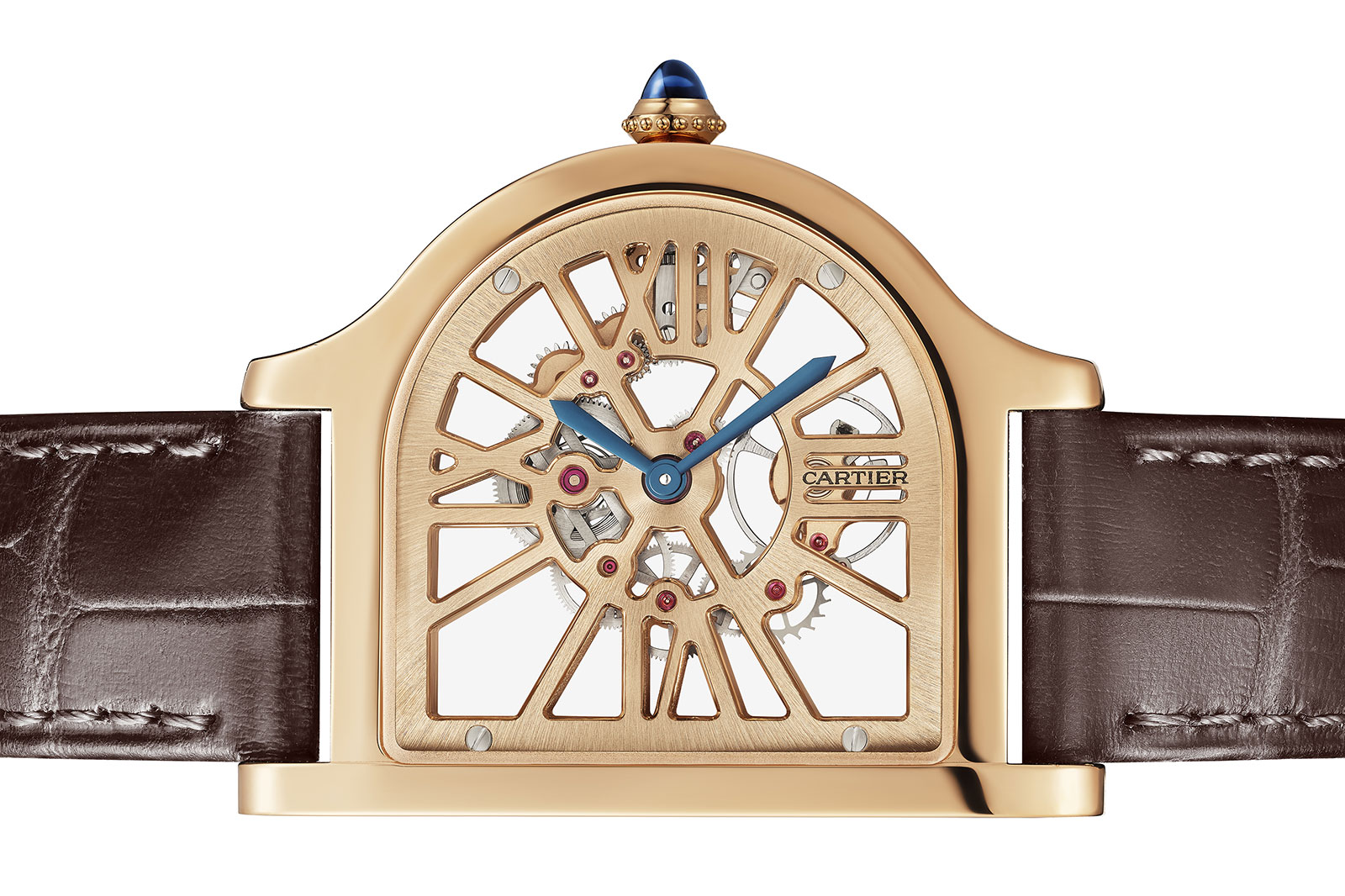 The Cartier signature is engraved in the main plate and filled with lacquer, and is unobtrusively hidden in “III”