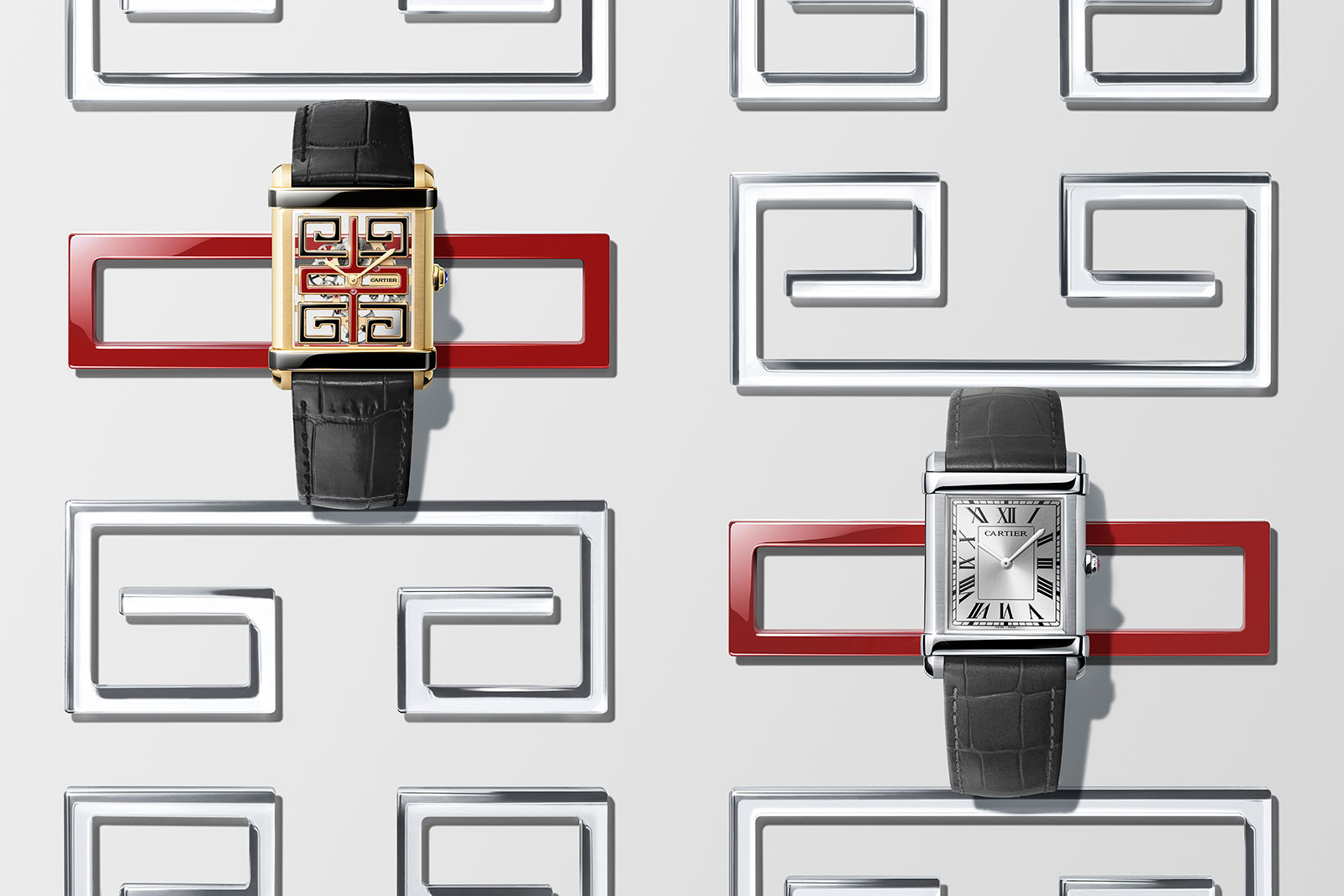 After having reimagined signature models like the Tank Cintree and Tank Asymetrique, Cartier now turns it attention to something less well known. The Cartier Privé Tank Chinoise arrives just in time for the 100th anniversary of the original Tank Chinoise, which was inspired by traditional Chinese architecture.

Unlike past Cartier Privé models that adhered closely to earlier versions of the model, the new watch takes more liberty in reimagining the Tank Chinoise, which was last available in 2004 as part of the Collection Privée Cartier Paris (CPCP). 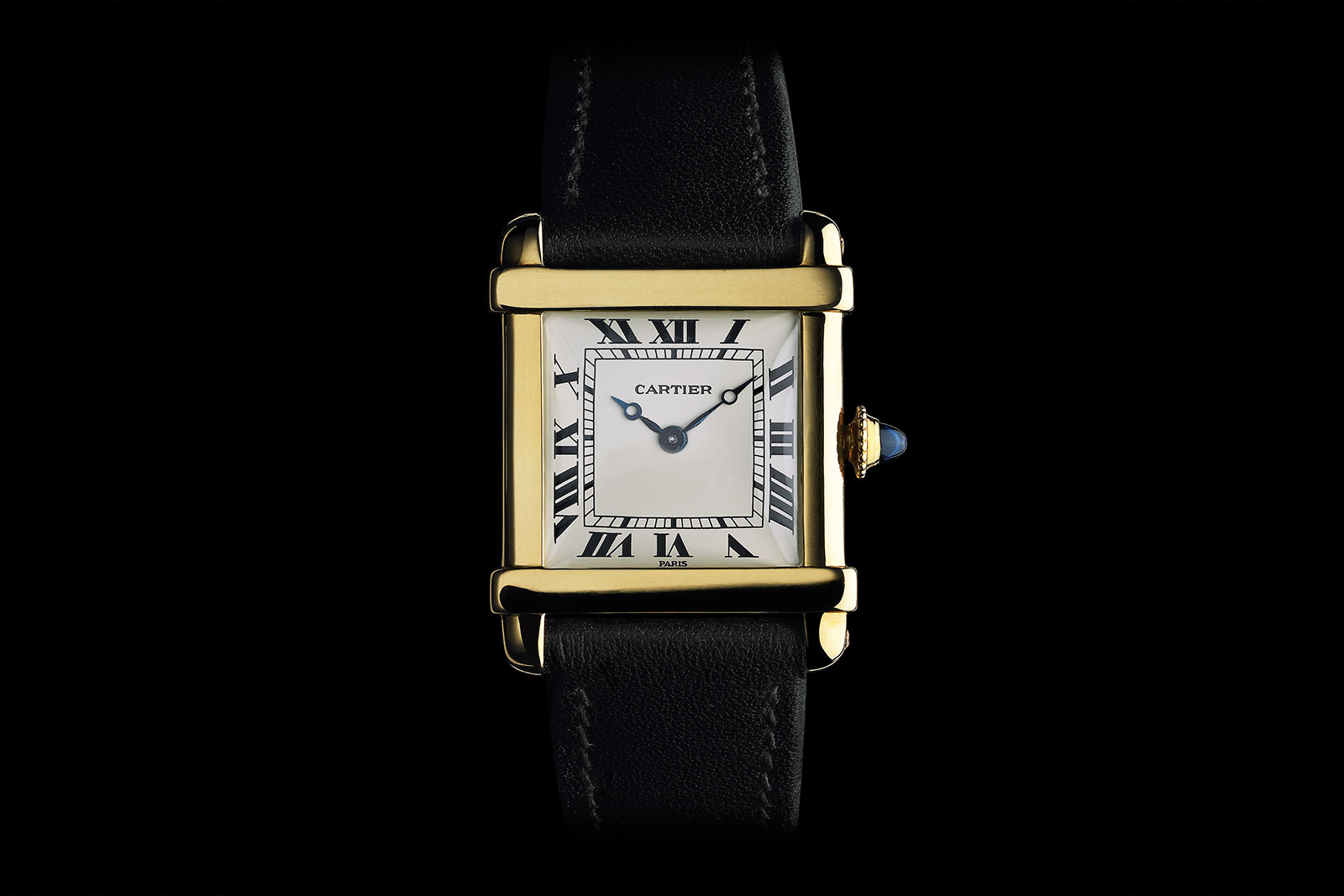 For fans of the 2004 Tank Chinoise, which was very square yet made up of rounded edges and lines, the new model will be jarringly different with its angular form.

Yet for anyone who appreciates a traditional Tank, the new Chinoise is more like a Tank than any past version of the design.

I like the redesigned case. Where I would have wished for something different is the dial, which repeats the same elements found in past Cartier Privé models; a bolder dial would have gone better with the restyled case.

However, Cartier certainly went all out with the skeleton version, which is striking and original. It comes close to being too much with its Chinese-inspired motifs, but not quite, so it still looks and feels tasteful. 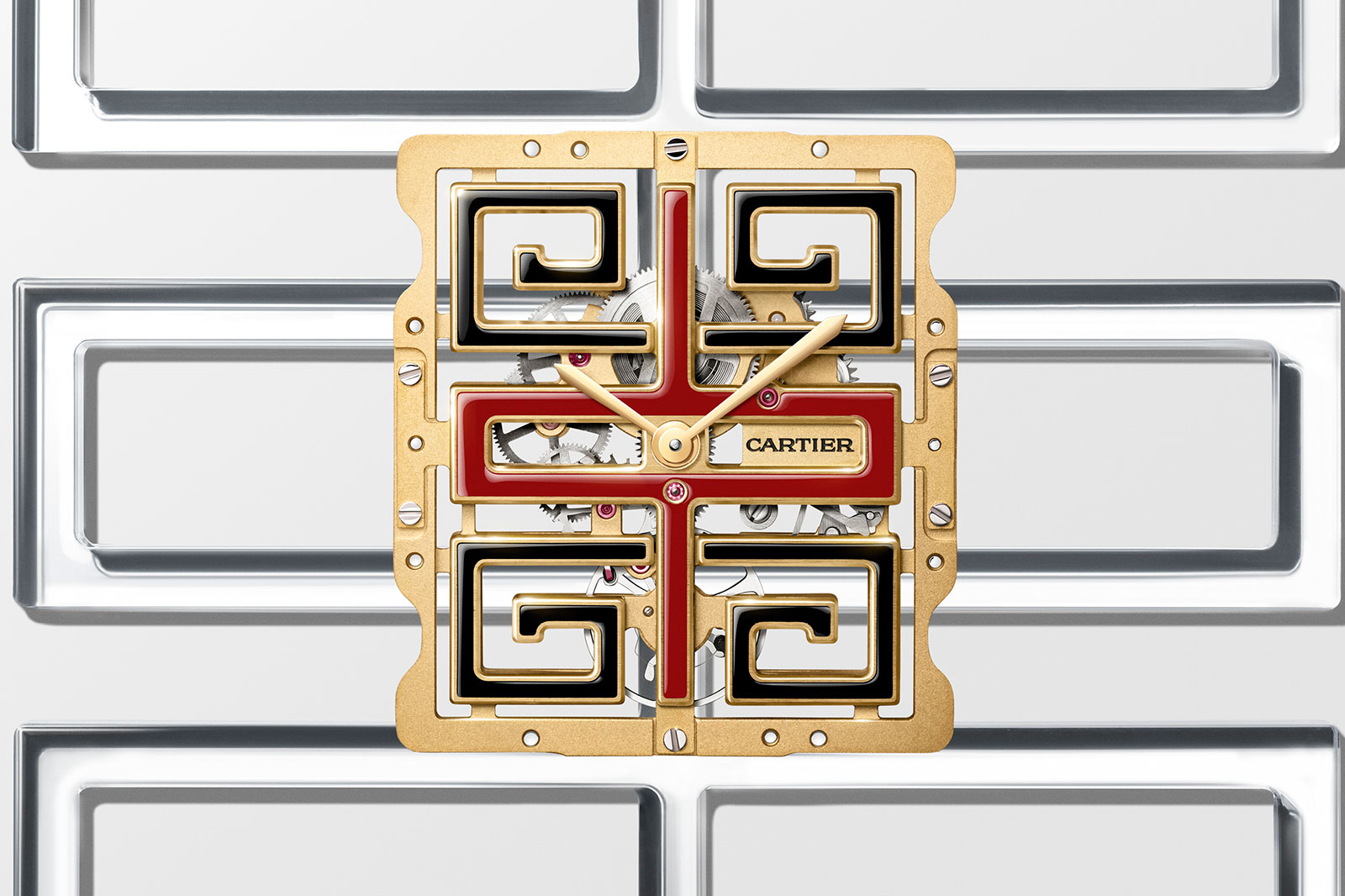 The new Tank Chinoise is akin to a Tank Allongée – it’s an elongated version of the earlier CPCP Tank Chinoise. This gives it proportions that are in line with most Tank watches, which are longer than they are wide. In contrast, the CPCP Tank Chinoise of 2004 was a squarish watch, and its dial was a perfect square.

The Tank-like aesthetic of the new Chinoise continues with the case details. The case has steps on each brancard, allowing for contrasting brushed and polished surfaces. Both horizontal bands, however, are rounded and polished. 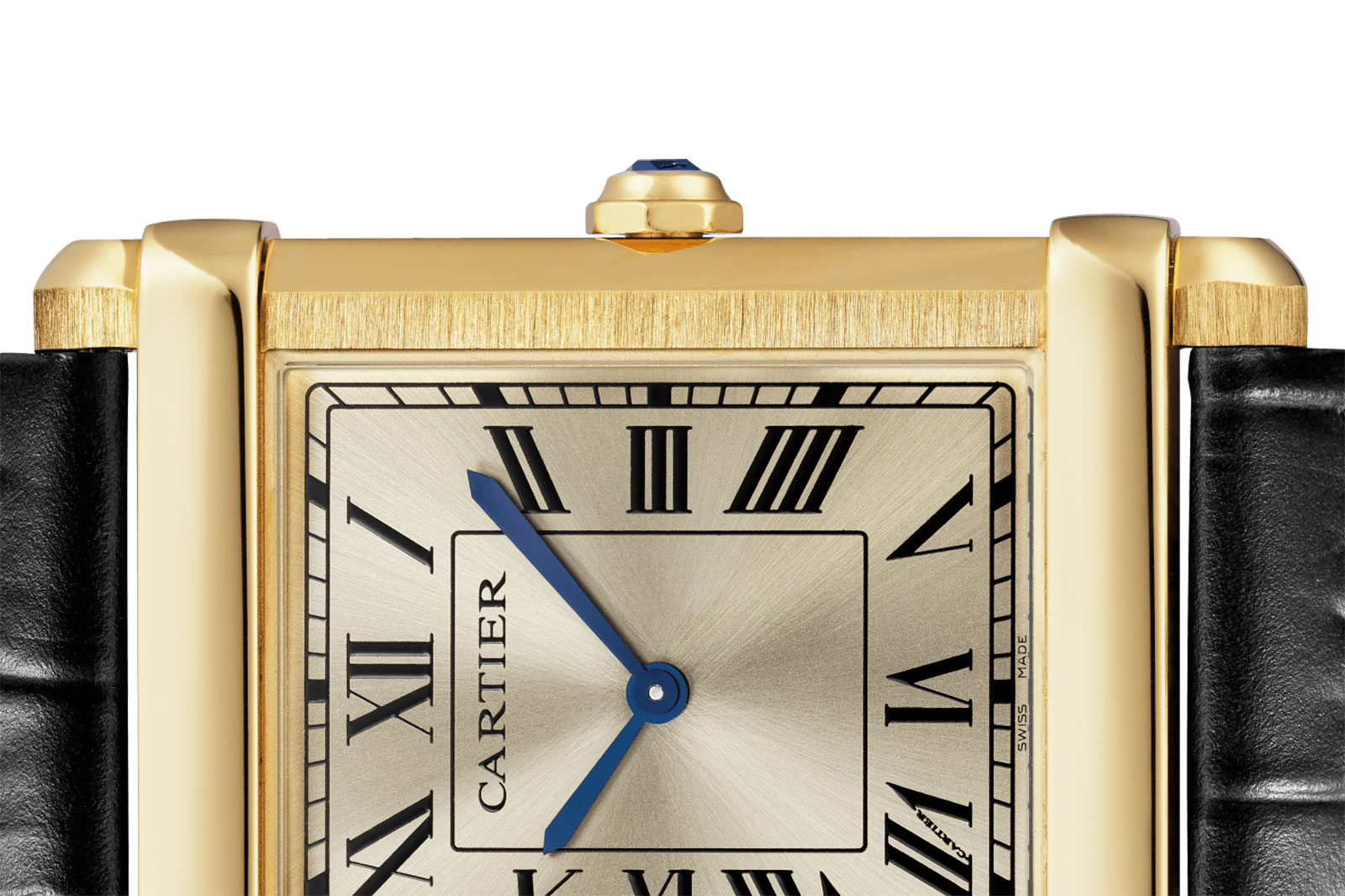 And as is typical for the Cartier Privé, the Tank Chinoise will be available in two colours of gold as well as platinum. Each version has a slightly different dial colour to complement the case metal, though all three share the same design. 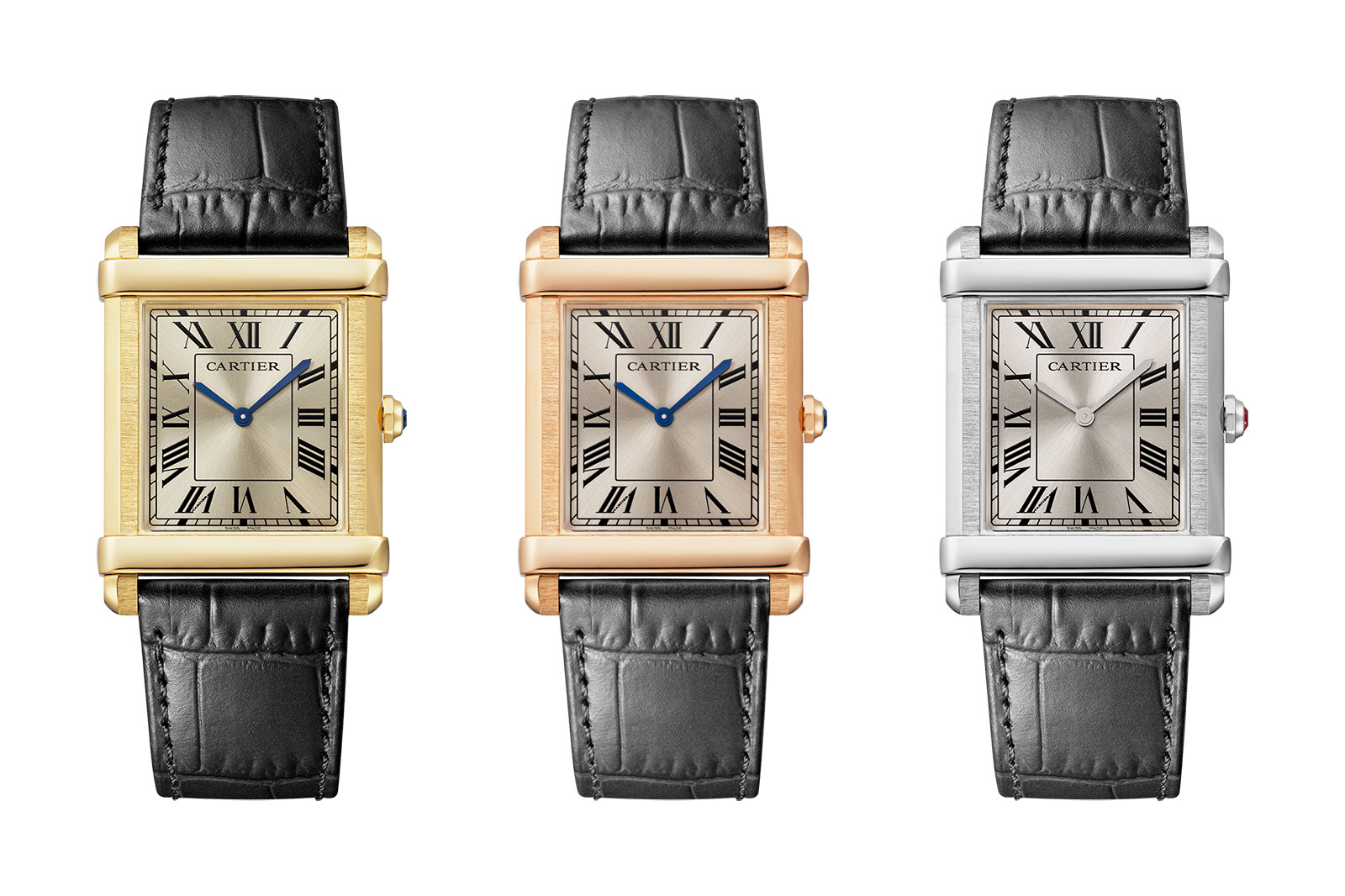 The skeletonised version of the Tank Chinoise is almost identically sized, but it is certainly more striking. The colours and complexity of the skeleton version diminish the angularity and edges of the case, giving the watch a very different feel, despite the case being largely unchanged.

The skeleton utilises a variant of Cartier’s well-known hand-wind skeleton movement, the 9627 MC. But instead of Roman numerals as is the norm for Cartier’s skeleton movements, the bridges and base plate have been open-worked to form a Chinese-inspired geometric pattern, one similar to those found on ancient textiles. 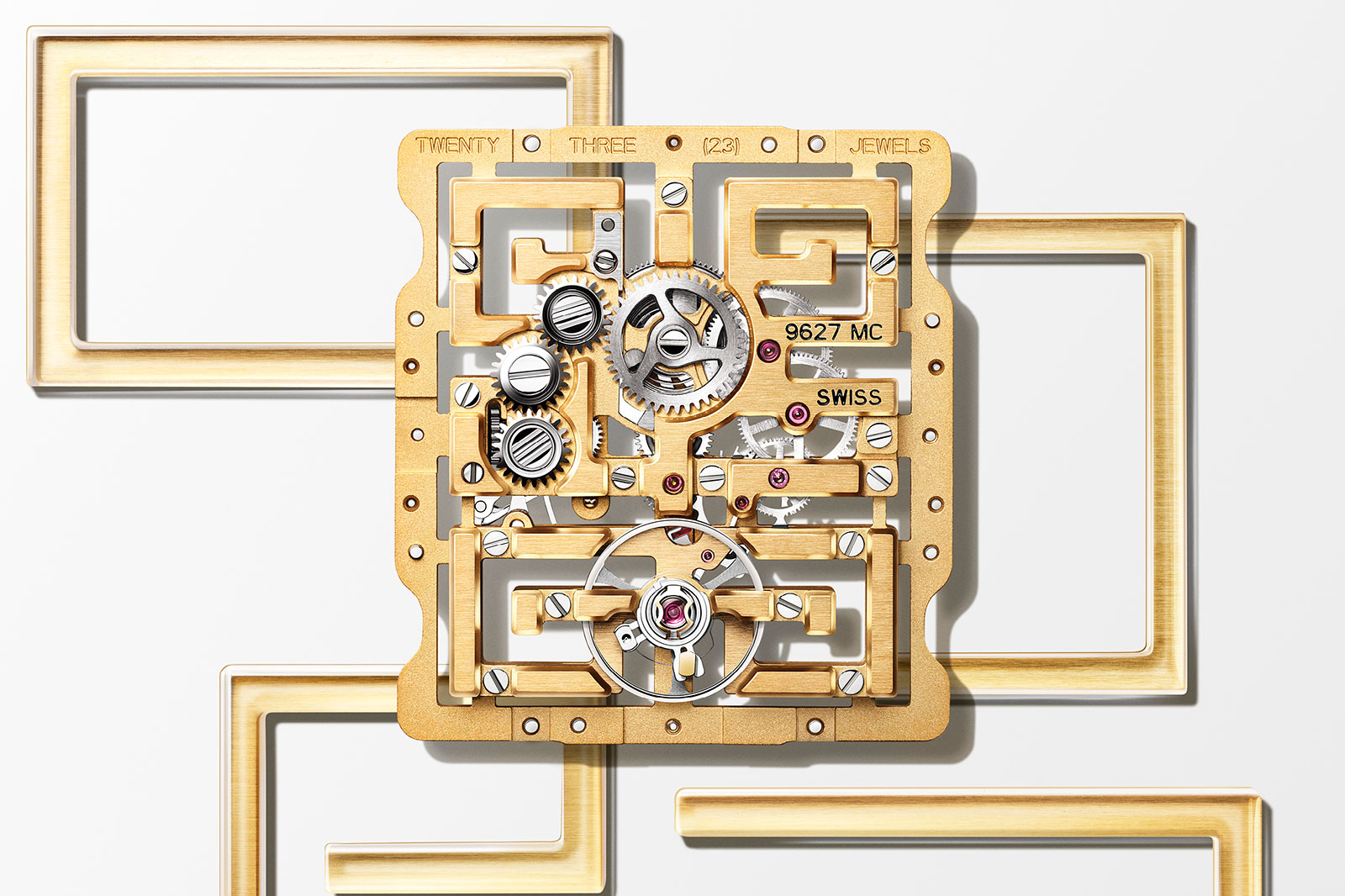 But most unusual is the base plate that doubles as the dial – it’s been filled with lacquer. While Cartier has used lacquer to decorate cases in the past, the lacquered bridges are a first. 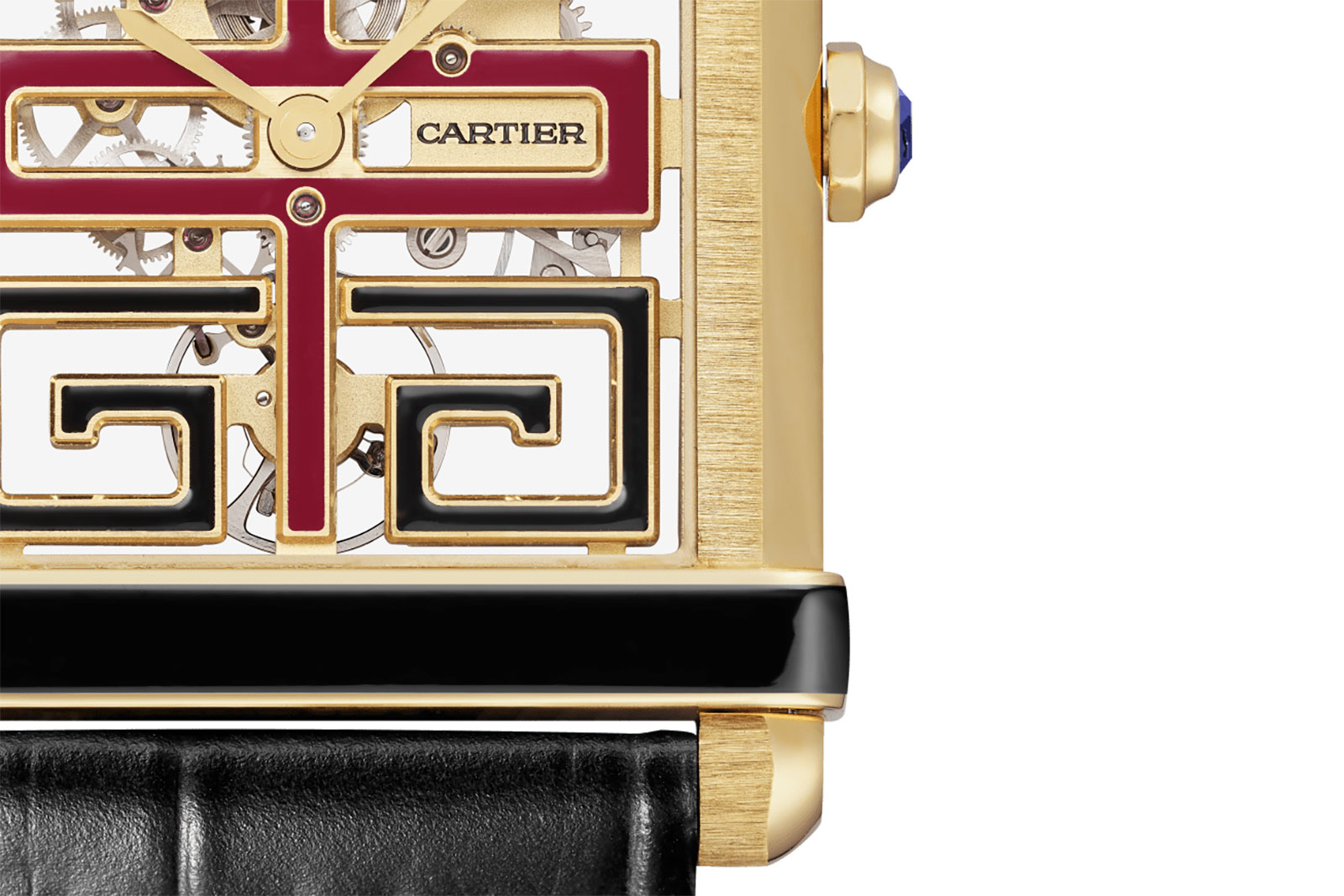 There will be three versions of the Tank Chinoise Skeleton – all will be limited editions – starting with a base model in yellow gold with a lacquered movement along with lacquered bands on the case.

Another is platinum with a blue and red lacquered movement, while the final version is the platinum model but with diamonds on the case. 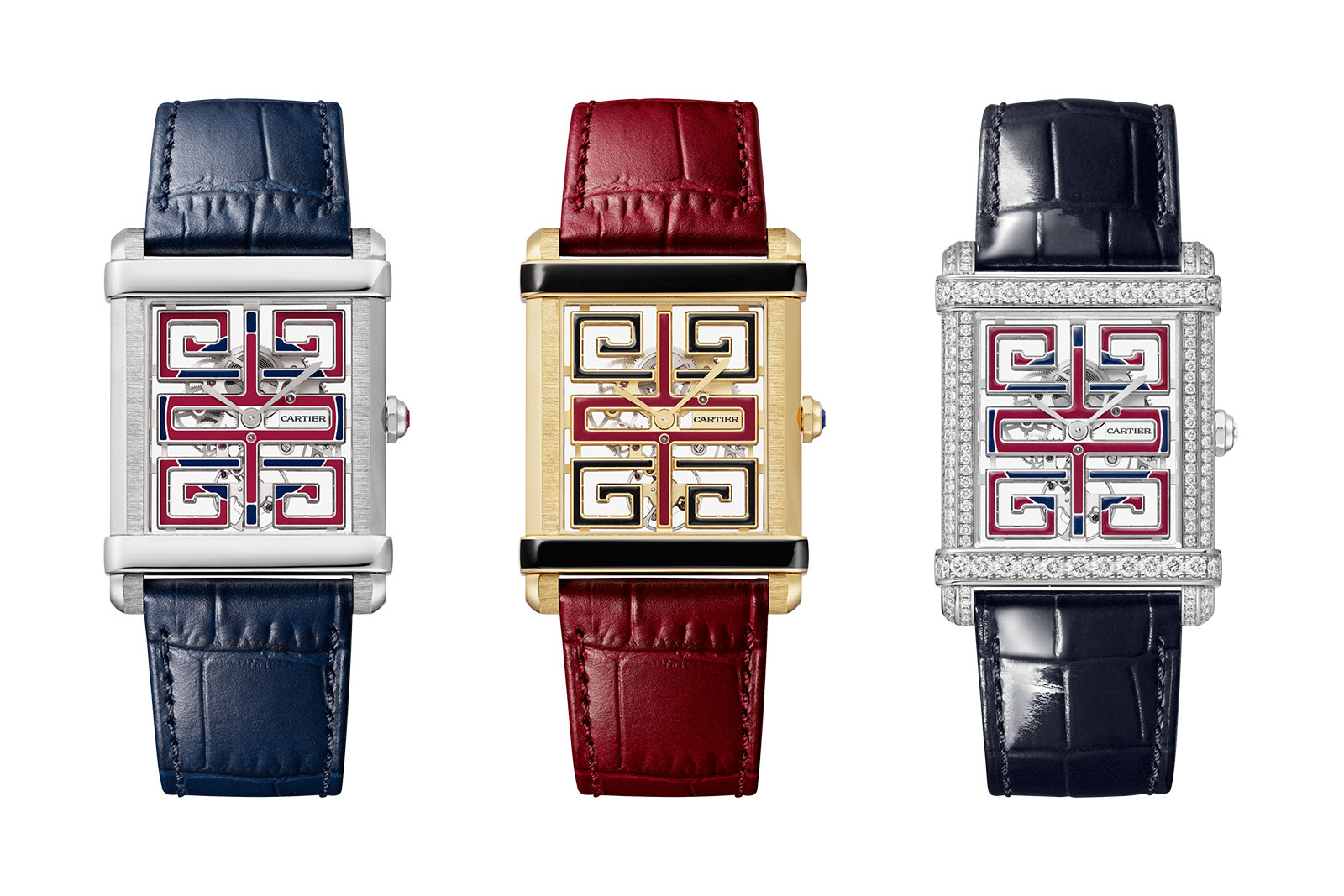