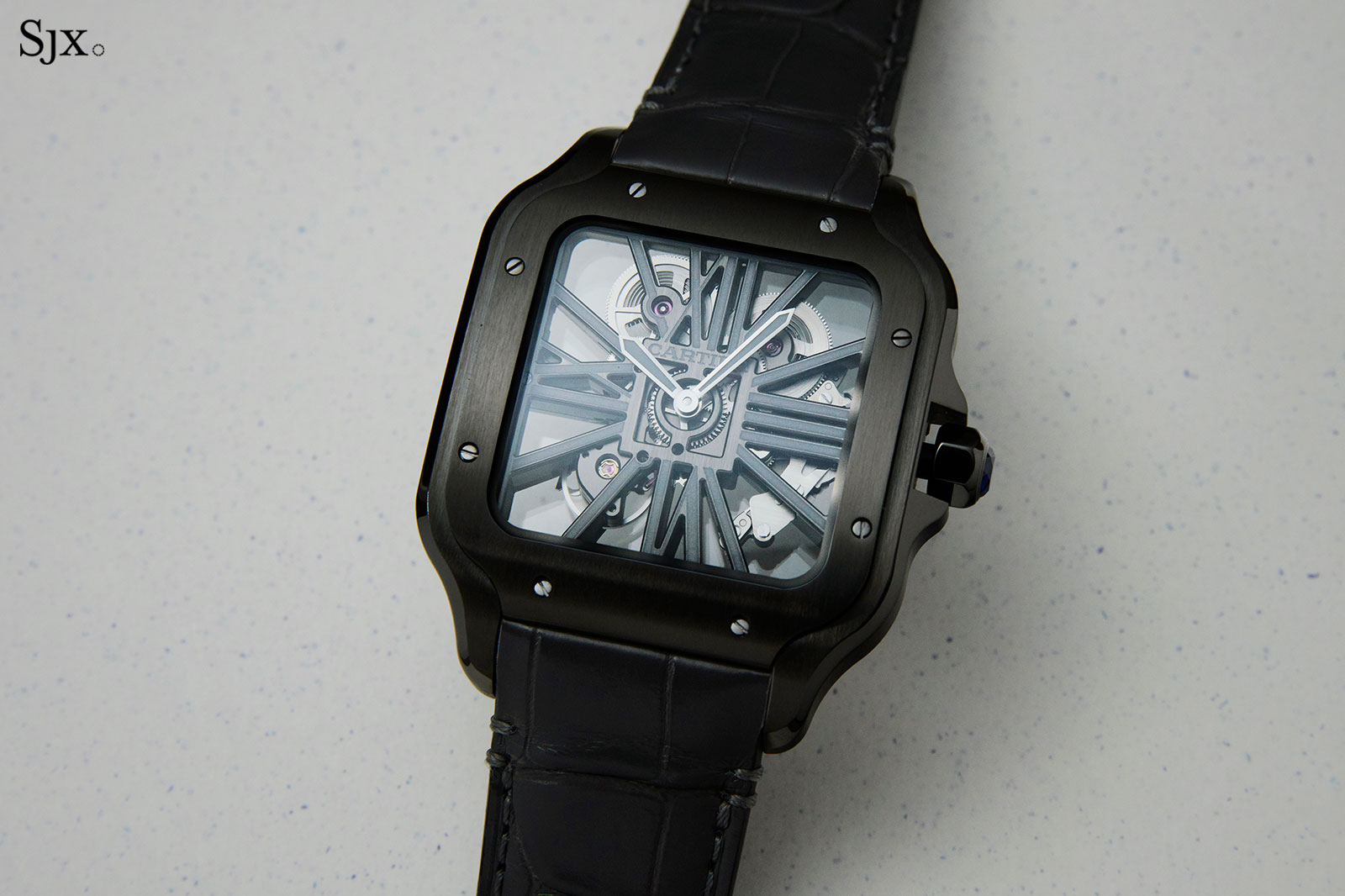 Having been completely revamped in 2018, the Cartier Santos is the oldest serially produced men’s watch model – it was introduced in 1904 – but equipped with modern conveniences like the Cartier’s proprietary quick-release strap, an in-house movement in most variants, plus a larger but ergonomic case.

Cartier expanded the Santos line this year with a new chronograph and a new dial finish with the Santos Gradient Blue, but the coolest addition was undoubtedly the Santos Skeleton ADLC “Noctambule”, French for “night owl”. It has luminous paint on the skeletonised movement that glows in the dark.

This is the first production Cartier watch with Super-Luminova on the watch movement; though in 2006 Cartier presented the prototype Tank Louis Cartier “Noctambule” that was never put into production and now sits in the company’s archives.

The Santos “Noctambule” is a standout in the collection, combining Cartier’s signature skeletonised movement with a luminous base-plate, plus the sporty, all-black Santos case.

The case is stainless steel that’s treated with amorphous diamond-like carbon (ADLC), a hard coating derived from diamond that increases the scratch-resistance of the case, although it does not render the case scratch-proof. As is typically the case with an ADLC coating, the surface is a dark, dark grey rather than pure black, which works well with the silvery-grey colours of the movement.

While the case is identical in form to the other Santos models, it has a vertically brushed top surface on both the bezel and case, with only the bevels along the edge of the case being polished. This gives the watch a restrained style, meaning it has a discreet presence on the wrist, despite being quite large and skeletonised.

Skeleton watches are a Cartier signature, particularly where the base plate and bridges have been open-worked to form Roman numerals, a quintessential element of Cartier watches, along with sword shaped hands.

The “Noctambule” takes the idea further with the Super-Luminova coating that allows the skeletonised movement to glow, which also means the watch is legible in the dark.

Inside is the cal. 9612MC that has been used inside a slew of Cartier skeleton watches. It has a 72-hour power reserve, made possible by two barrels. Here the movement is mechanically identical, with the changes being aesthetic.

The base plate and bridges are painted with Super-Luminova that appears dark grey in the light, keeping the dark colour palette consistent during the day. The hour and minute hands, as well as the brand’s logo, are treated with the same luminescent paint. 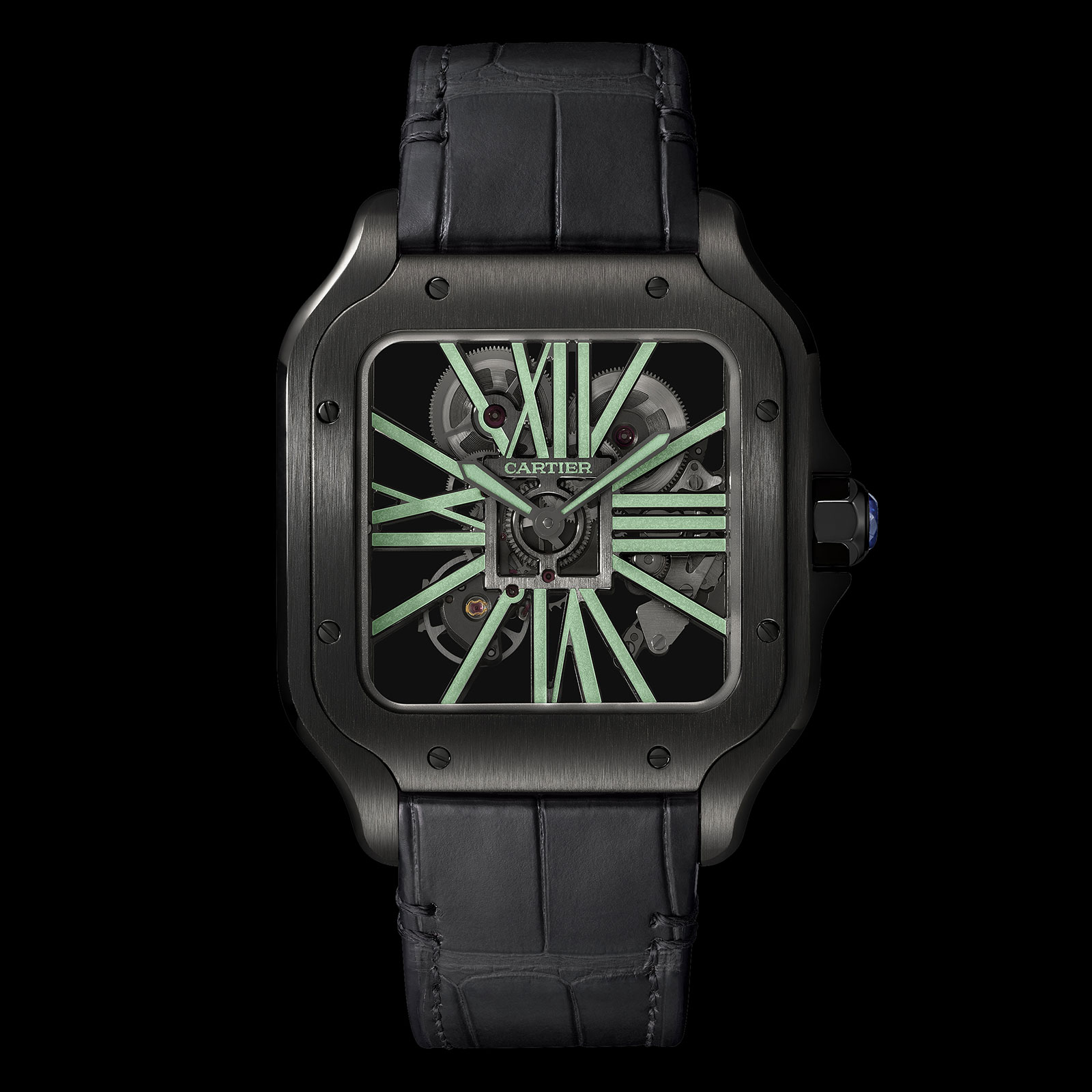 The Santos “Noctambule” in the dark. Photo – Cartier

Once “charged” with light – both artificial and natural light can do the job – the Super-Luminova glows in the dark for several hours, though it dims over time. In the dark the “Noctambule” lume glows a pale green; because the luminous paint includes pigments to colour it grey – the substance is white in its natural state – it does not glow as brightly as natural Super-Luminova.

While the watch is stunning when fully charged and lit up in the dark, the similar form of the hands and Roman numerals can make them difficult to distinguish from each other.

Decoration-wise the movement is well detailed, with a vertical brushing on the top surfaces, echoing the finish of the case, and polished bevels on all the bridges and base plate. The finishing is well done, though no doubt with mechanically tools, it is not quite visible due to the dark colours of the movement. 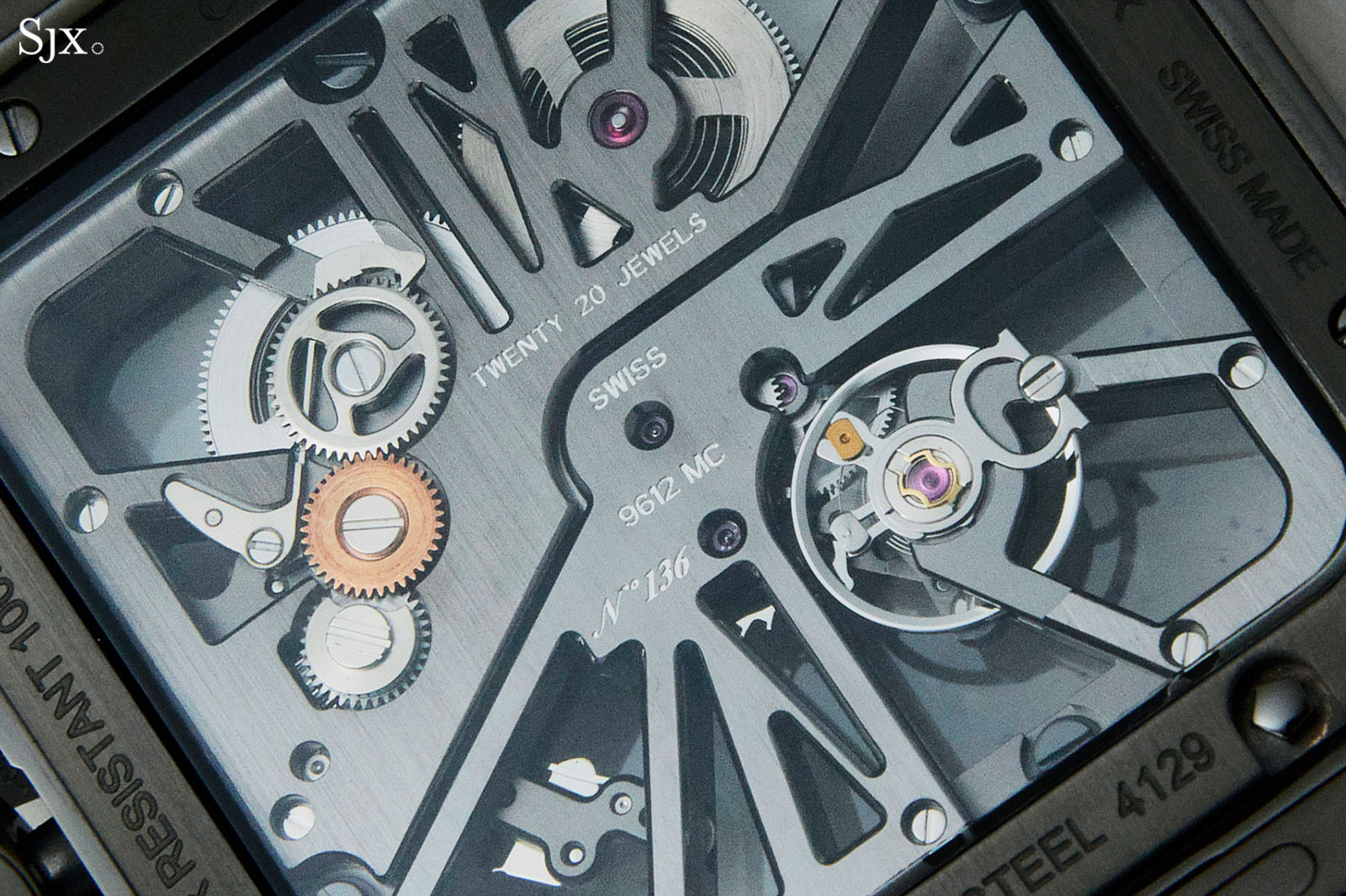 The cal. 9612MC is a good looking movement, with the only let-down being the basic Etachron-style regulator index, which is functional but typically found on less expensive movements.

The “Noctambule” is the largest size Santos case, measuring 39.8mm wide and 47.5mm lug-to-lug, which makes it seem, at least on paper, like a very large watch. But the case is relatively slim, just 9.8mm, high, while also being curved, so it sits well on the wrist.

And the dark finish of the case and bracelet also leave it looking smaller than the Santos Skeleton in a conventional steel case.

But the fact that it is a steel case underneath the ADLC coating gives the watch some weight. A titanium case would have made the watch less hefty, and importantly been more suited to the visual lightness of the open-worked movement.

And it has the same retail price as the current Santos Skeleton in stainless steel, which is fundamentally the same watch but less interesting visually. Although the conventional Santos Skeleton is sold with a bracelet, and the “Noctambule” is only available on a leather strap, the glow-in-the-dark skeleton is the more compelling product.

The watch is available now at Cartier boutiques and retailers.