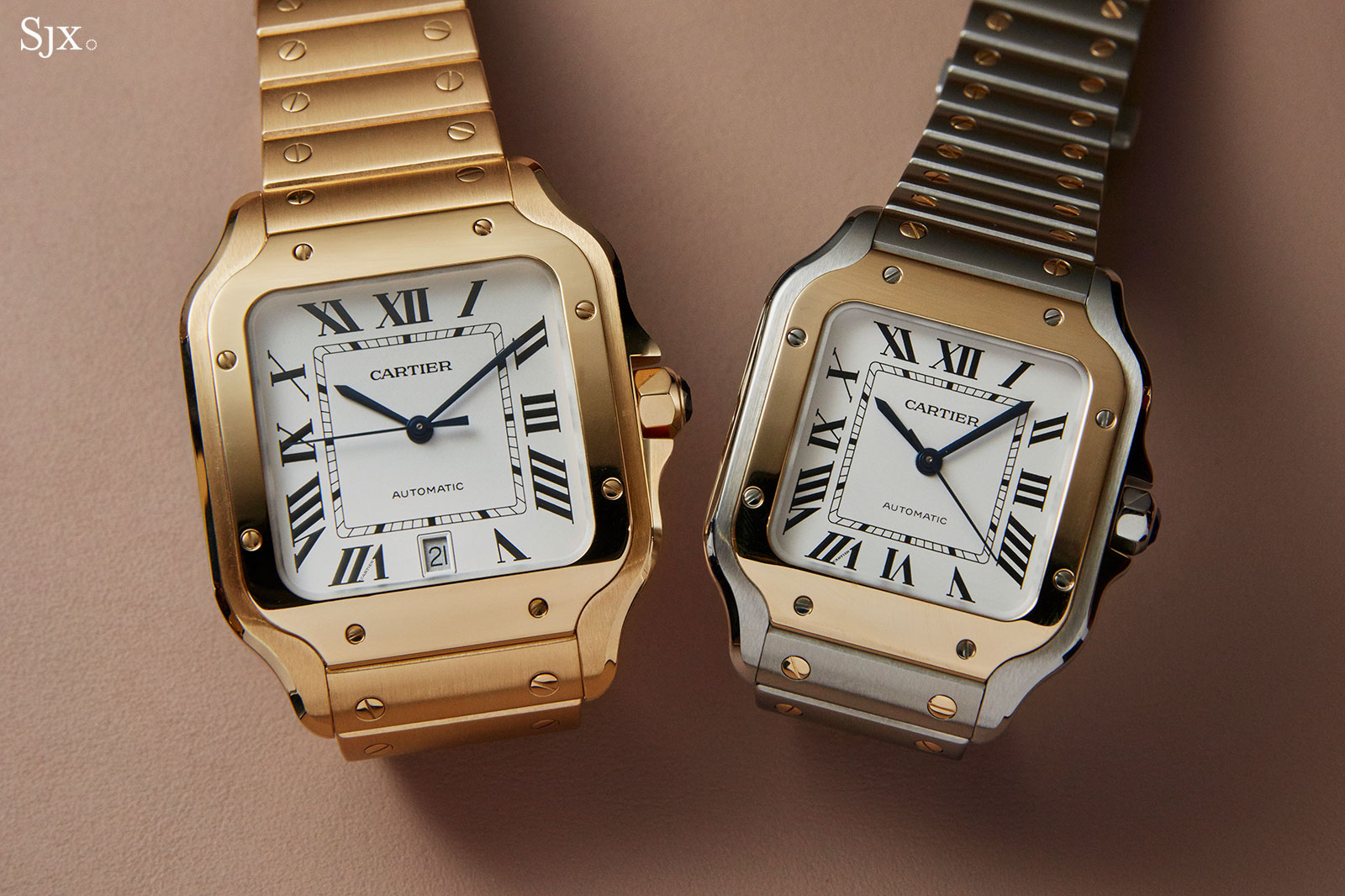 With the vast majority of watches being round, it’s hard to think of many form watches that are runaway successes. The hall of fame is sparsely populated; there are a handful in the tonneau-shape category with Richard Mille and Franck Muller, octagonal with the Royal Oak, and of course rectangular with the Jaeger-LeCoultre Reverso and Cartier Tank.

There is arguably only one in the square-case category, and a watch with remarkable longevity at that – the Cartier Santos. In fact, the Santos is the oldest serially produced form wristwatch, preceding even the Cartier Tank, which just turned 100 last year. While the Tank got a modest facelift for its centenary, including an entry-level steel model, the Santos received a major, and successful, makeover at SIHH 2018. A 100 year old but looking fresh

Widely considered to be the first timekeeper designed from the ground up as a wristwatch for men – at a time when wristwatches were little more than adapted pocket watches no less – the Santos Dumont was conceived for pioneering Brazilian aviator Alberto Santos-Dumont in 1906 by his friend Louis Cartier. While Patek Philippe and Girard-Perregaux are amongst the brands recognised for making the first wristwatches in the late 19th century, it was arguably the Santos that ushered in a now familiar idea: the wristwatch as a tool for adventurers and daring exploits, like James Bond’s Submariner or the Speedmaster Moonwatch.

While the Santos was in production almost continuously for decade upon decade, it was only in its second incarnation as the Les Must de Cartier Santos of 1978 that it became a massive hit. One of the first Cartier watches available in steel, and consequently affordable, the Santos helped open up the brand to a wider audience, becoming perhaps the decade’s definition of accessible luxury. Square and unapologetically industrial with exposed screws on the bezel and bracelet, the steel and gold “two-tone” Santos was arguably the watch that turned the aristocratic jeweler into a household name. Even Gordon Gekko sported one in 1987’s Wall Street that was thoroughly typical of the era, quartz and in solid 18k gold. Since then the Santos has been available in myriad variations, each reflective of its era – first the Santos Galbée in several iterations, then the oversized Santos 100 – the bestselling modern day model – and now the all-new incarnation unveiled earlier in the year.

More than a homage, the new Santos has managed the rare feat of incorporating some significant advancements while still respecting the quintessential elements of the design.

Though the large model is comparable in size to the Santos 100, it feels slightly smaller and a touch more elegant. The dial is a matte silver and classic Cartier with Roman numerals, a railway minute track, as well as a “secret signature” integrated into the “VII”. More importantly, it harks back to the Santos of the 1980s by doing away with the Super-Luminova found on the Santos 100. While that might come at the expense of nighttime legibility, the blued steel hands give the watch an elegance synonymous with old school Cartier designs. The most obvious difference is the bezel, which is no longer a rounded square as it was since the beginning. It has now been elongated to meet the bracelet, ensuring a stronger unity between the case and bracelet – an apt focus since one of Louis Cartier’s pursuits when he created the Santos and then the Tank was to seamlessly attach the band to the case in a single, integrated design. The Santos 100 (left) and the current Santos

The case, measuring just 8.83mm high in the medium size and 9.08mm in the large, has been designed with ergonomics in mind. That means the case is curved, with a curved case back to hug the wrist. It also dictates rounded contours, with the lines of the lugs flowing seamlessly into the bracelet and upwards into the crown guards, removing any hard or sharp edges.

The finish of the watch, however, is refined. Cartier cleverly retained the alternating brushed and mirror polished finish of earlier Santos models. The top surface and flanks of the case are brushed, separated by a decisively wide polished bevel that accentuates the shape of the case. The finishing is echoed on the bracelet, which tapers slightly to the clasp that, in a nod to the 1980s, is engraved the double “C” Cartier logo. Despite having single, wide links, the bracelet is fine and smooth on the wrist. But the most useful innovation is Cartier’s patent-pending QuickSwitch and SmartLink mechanisms. The bracelet or strap can be easily detached from the case by simply pressing a tab between the lugs and sliding it upwards, hence “QuickSwitch”. Replacing the bracelet or strap reverses the motion, and it snaps in place with a reassuring click. The “SmartLinks” allow the bracelet to be sized without any special tools, with individual links easily removed by depressing an oblong push-piece on the underside of each link, which releases the horizontal bar that holds the link in place. The push-piece is large enough that this can be done with a finger. Because they are so easily interchanged, the Santos is sold with both a bracelet and leather strap, in every iteration of the model, save for the solid gold version, which is also available with two straps (avoiding the sticker shock of a gold bracelet, which doubles the retail price).

Both the QuickSwitch and SmartLink are useful and fairly uncommon, though not new, especially amongst Cartier’s sister brands in Richemont that have relied on various iterations of the same systems over time. Most notably it was IWC that pioneered button-release links in the 1990s with its then landmark bracelets.

The downside to the QuickSwitch strap mechanism is the same as for any proprietary strap attachment: only Cartier replacement straps with the built-in lug ends will fit the watch, eliminating the choice and lower price of aftermarket straps. While earlier generations of equivalent Santos models were powered by ETA movements, the new model, in both sizes, is powered by the automatic cal. 1847 MC, which is Cartier’s entry-level in-house movement. It runs at 4Hz and has a 48-hour power reserve. The 1847 MC is a simple calibre in form and function, but does the job well and is hidden behind a solid back.

While the calibre is most the same as when it was launched in 2015 inside the Cle de Cartier, it has been upgraded in one crucial aspect – magnetism resistance. That’s thanks to twofold magnetism-proofing, first being the nickel phosphorus escapement components that are less easily magnetised than conventional alloys. The second layer of protection is the soft iron inner cage that shields the movements from magnetism. Together they render the movement “effectively resistant” to magnetic fields, according to Cartier.

The new Santos is already available at Cartier boutiques and retailers.