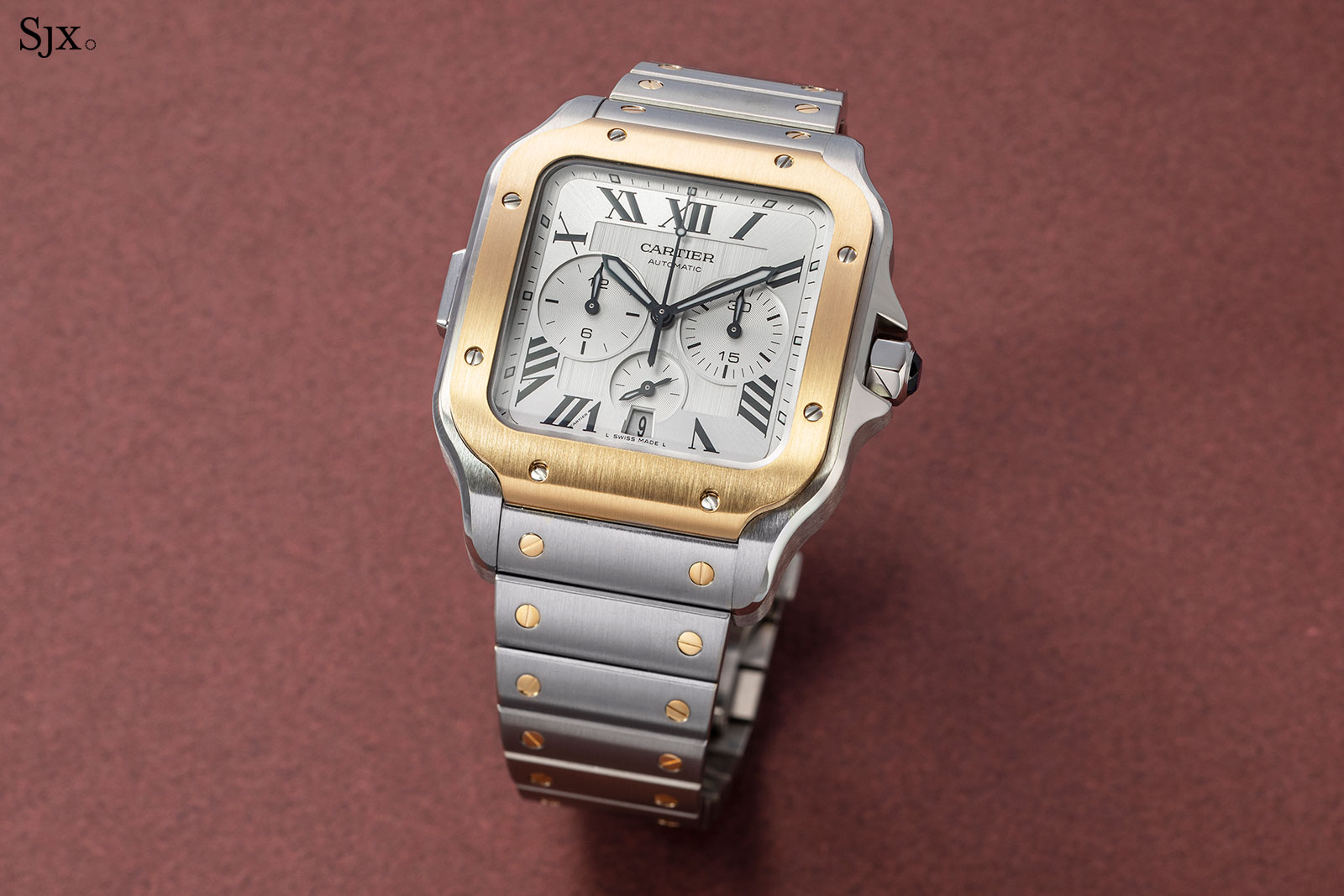 Cartier gave the Santos a thorough overhaul two years ago, revamping the case design (and incorporating a practical, easy-to-adjust bracelet) and equipping the line with an in-house movement, resulting in a successful new look for a watch first designed in 1904.

That was followed by the introduction of the Santos de Cartier Chronograph XL last year, which boasts a smartly-designed case and dial, as well as an in-house movement.

The new Santos chronograph is one of the best value proposition amongst sporty chronographs in its price range; the base model in steel starts just under US$9,000.

It combines a sharply-finished case with a solidly-constructed in-house movement, along with the historical lineage of the Santos design. Beyond that, the Santos chronograph also appeals for the thoughtful design, like the subtly-positioned chronograph button at nine o’clock.

But it is a little large at over 43 mm in diameter, and feels chunky, though not as much as its predecessor. Inevitably, the Santos chronograph, regardless of design, will lose some of the elegance possessed by the time-only Santos. 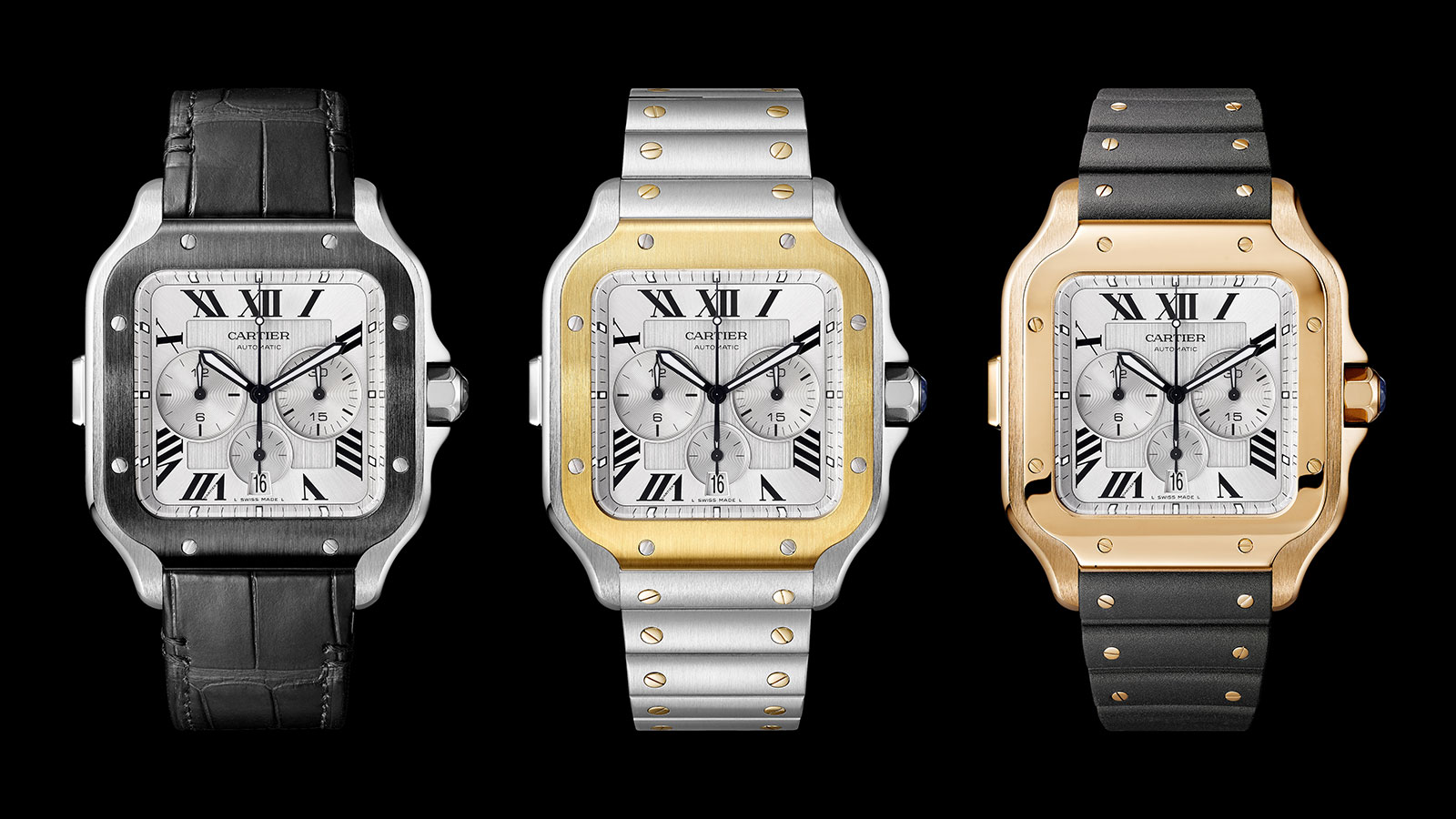 Of the variants available, the two-tone model in steel and yellow gold feels the most complete. It’s a little 1980s in style, but in a good way, and the distinctive Santos bracelet is a must have (and it’s also delivered with an additional rubber strap moulded to resemble the metal links).

But the downside is the huge premium for bracelet and bit of yellow gold – the two-tone model is 50% more expensive than the steel watch. It’s probably worth the stretch, but the premium feels a bit much.

While the Santos was created by Louis Cartier for Brazilian aviation pioneer Alberto Santos-Dumont in 1904, a chronograph version of the watch only arrived almost a century later in 1998, with the Santos Galbée Chronoflex ref. 2425.

A compact and thin watch, the Santos Chronoflex had mushroom-style pushers, giving it a little retro flavour. It was powered by a high-end quartz movement made by Piaget, the cal. 212P. The movement gave it a rather eccentric dial, with two square counters on each lower corner and a fan-shaped date aperture at 12.

A mechanical chronograph finally came along when the Santos 100 Chronograph made its debut in 2005. Unlike the time-only Santos 100 that was available in several sizes, the chronograph was offered only in extra-large size. That was necessary to accommodate the largish Valjoux 7750 movement, and also to preserve the characteristic wide bezel while incorporating the counters onto the dial. 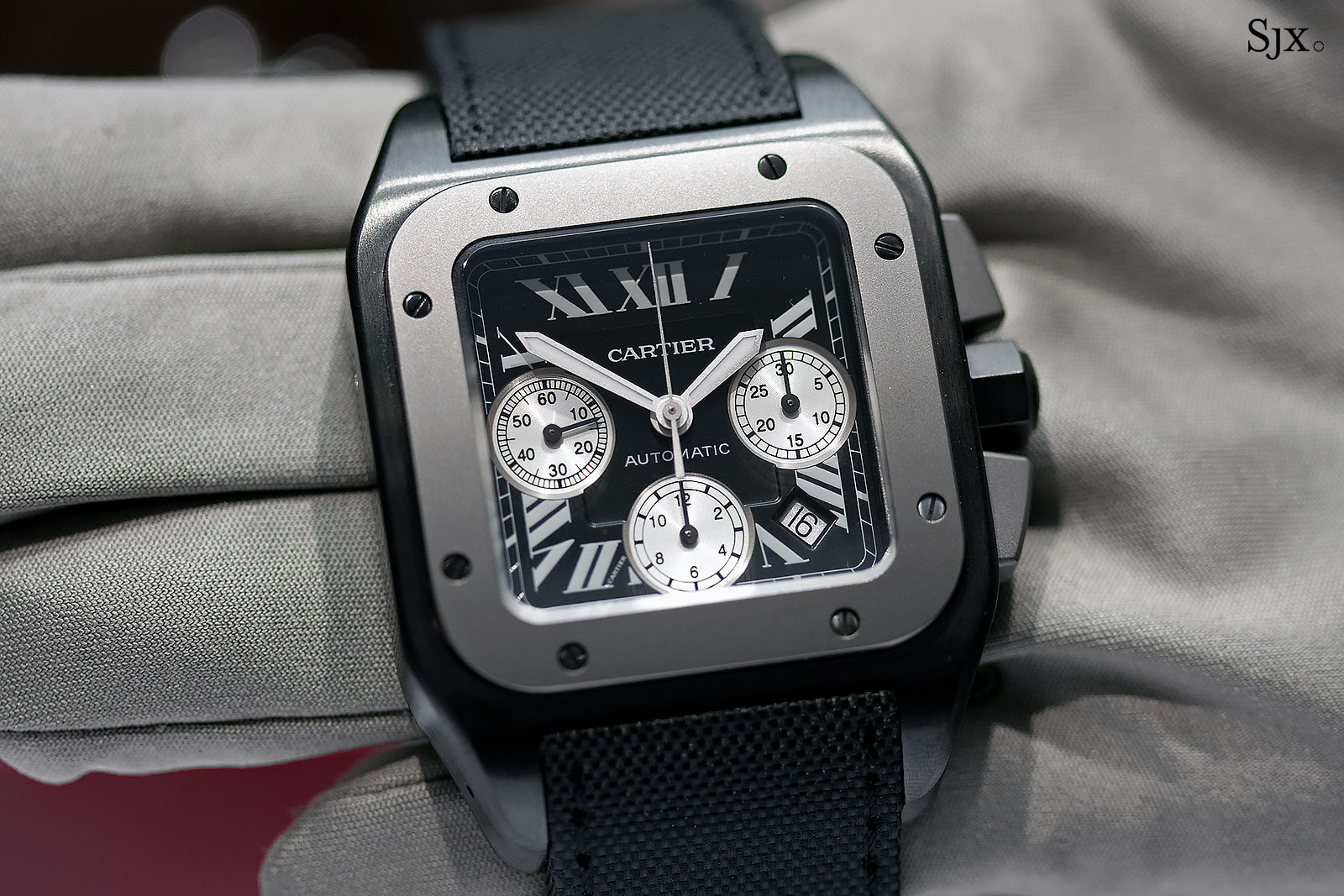 Likewise, the new Santos Chronograph XL is only available in one size – the case measures 43.3 mm by 51.3 mm and stands 12 mm high. It is no doubt large, but the case sits reasonably low on the wrist due to its curved case profile.

For now, the Santos Chronograph is available in three iterations – steel with a black-coated bezel, steel and gold, as well as an all rose-gold model. Both the steel and rose gold watches are only available on a strap. 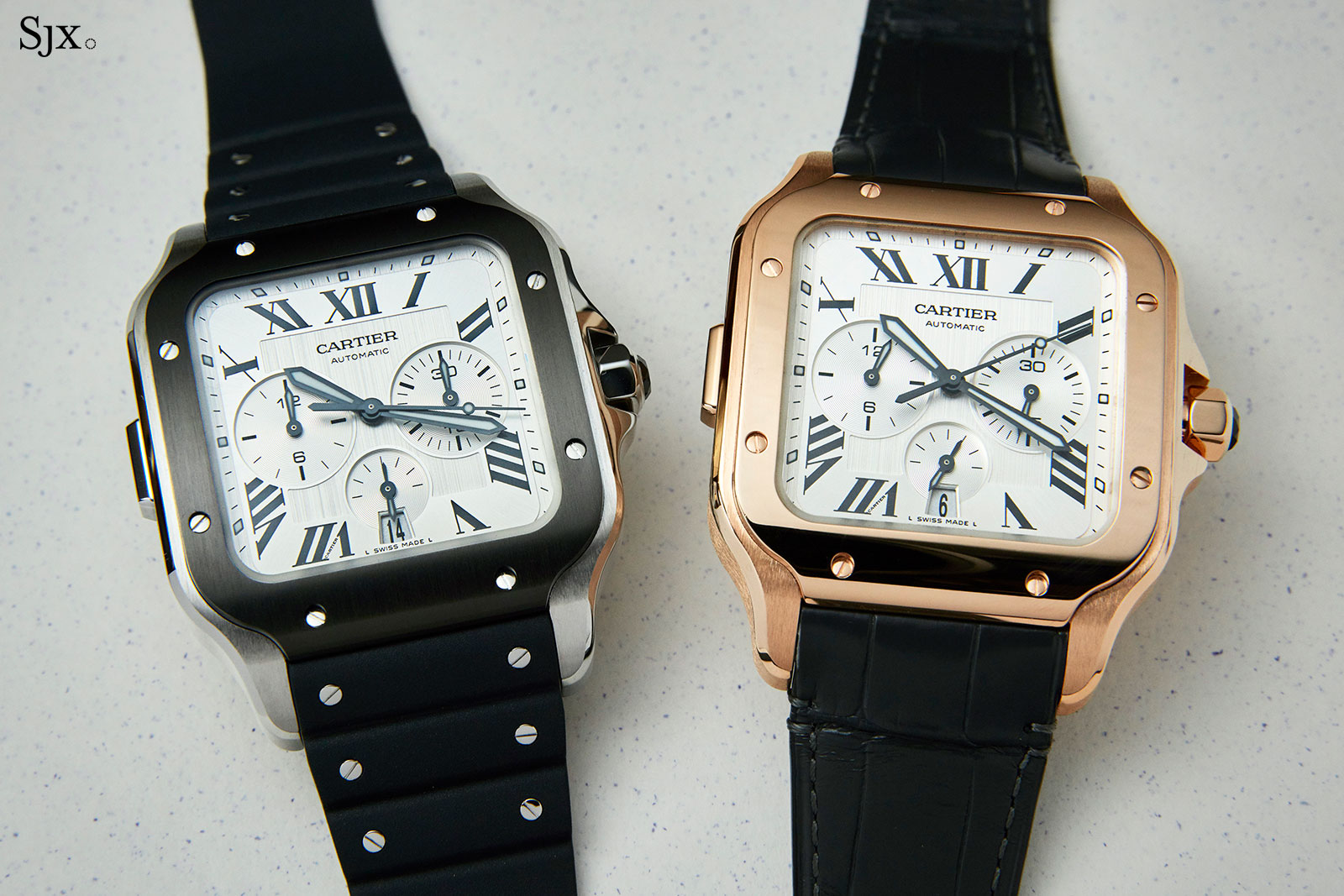 As with the redesigned time-only Santos, the chronograph was significantly refined, with the dial, case, and bezel all being tweaked. The most unusual aspect of the watch is the discreet, rectangular pusher positioned at nine o’clock that starts and stops the chronograph, with the reset pusher being integrated into the crown. 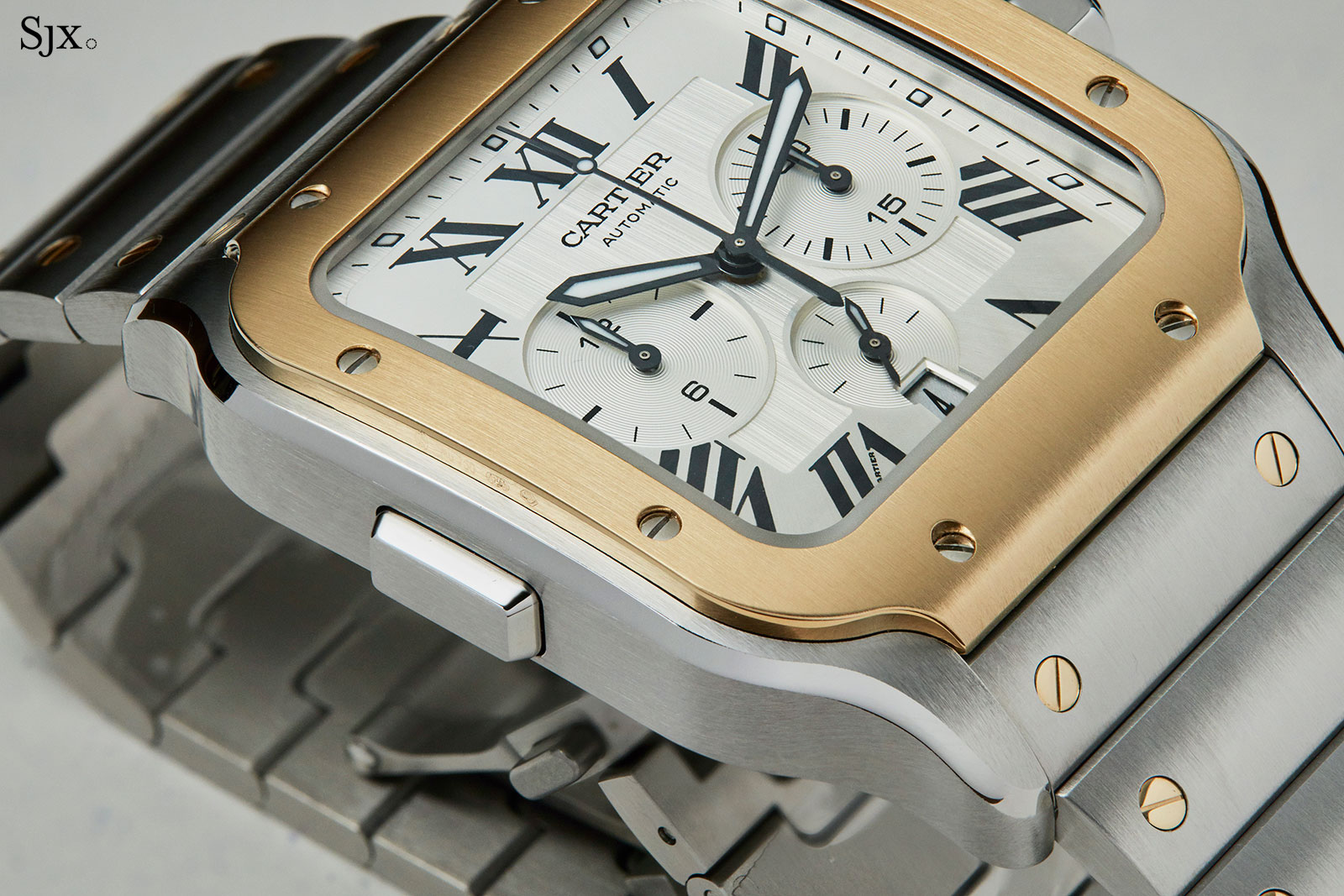 The wide but flat chronograph pusher on the case side 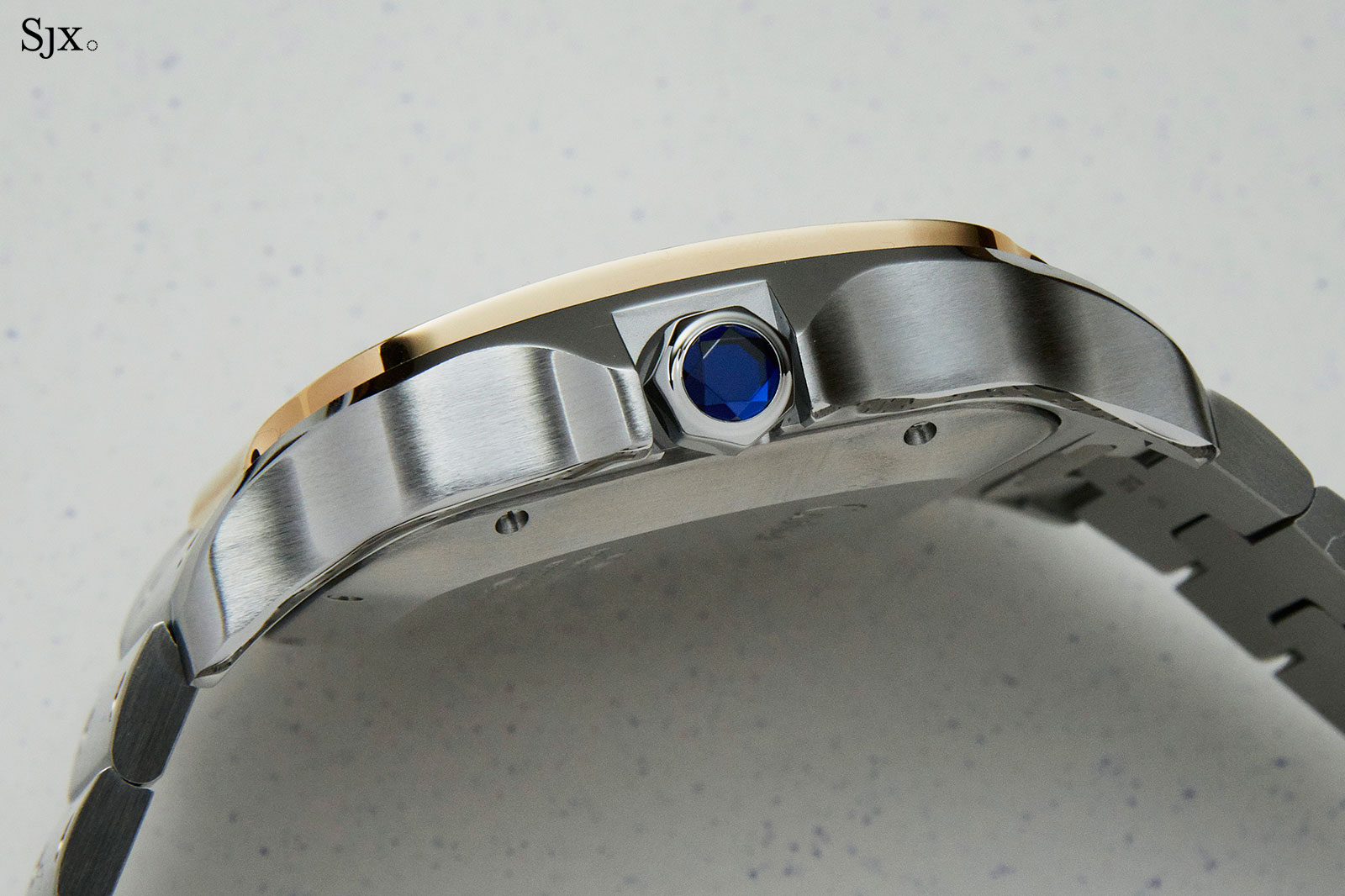 Presumably done to streamline the case and not detract from the trademark crown guards of the Santos, the pusher layout is unconventional, but it works well visually. Besides the cleaner outline, minimising the pushers make the watch seem a little smaller.

The pusher position also gives the case visual balance, something that continues on the dial, which is symmetrical. The dial was also simplified, so as to reduce the clutter after the chronograph counters were added. 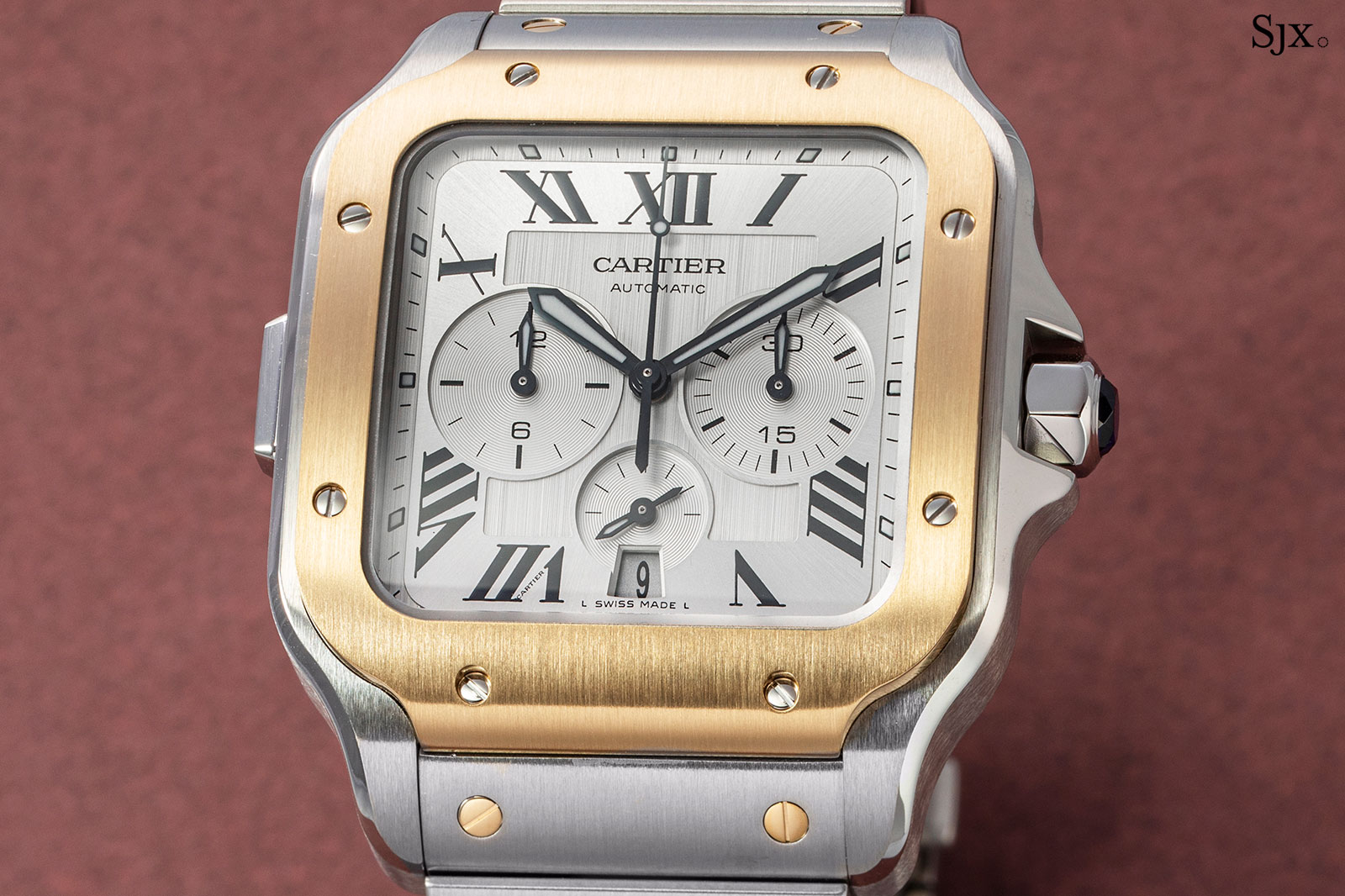 While the standard Santos has a railway minute track – and the Santos 100 Chronograph had railway tracks on the registers too – the minute tracks here are open. The registers are also smartly separated by function: the elapsed time counters are larger than the constant-seconds register, which also makes them more legible.

The time-only Santos does away with luminous hands, but the chronograph has “lume” filled hands, even for the sub-dials. This is matched by luminous markers on the minute track, all of which give it a more sporty feel. The feel is enhanced by the pronounced, vertically-brushed finish of the dial that gives it a slightly industrial look that’s a departure from the classic Cartier dial. But the most important design element of the current-generation Santos case is the bezel. Instead of being squarish, the bezel is properly integrated into the case design, extending outwards and flowing seamlessly into the bracelet. This effect is most pronounced on the versions of the watch where the bezel colour matches the bracelet. 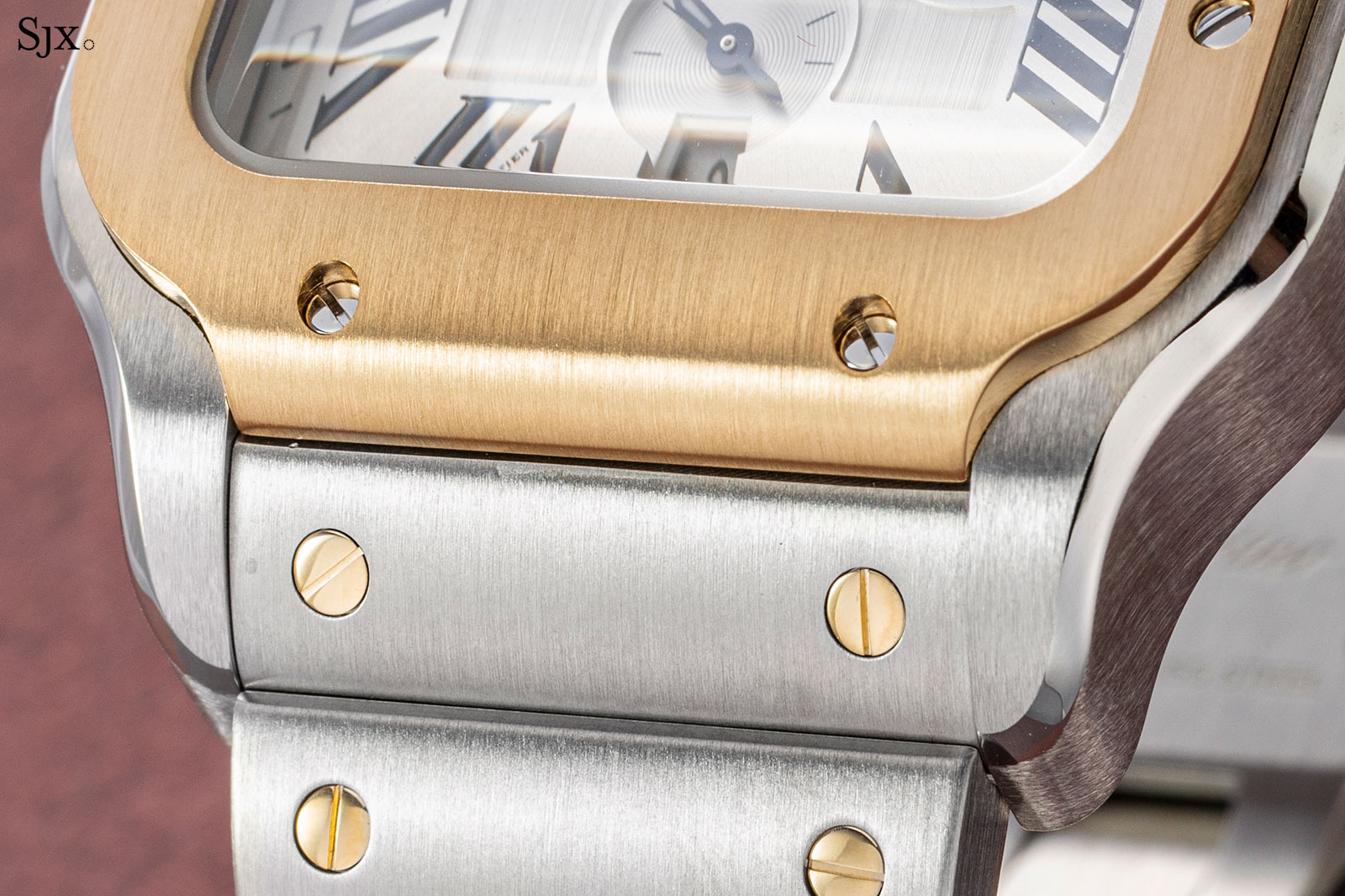 The case is visually lengthened the bezel, a quality that’s accentuated by its finishing. The top surfaces and flanks are brushed, separated by a wide, polished bevel.  The bracelet in contrast is completely brushed – and regrettably lacks the polished bevel on its edges – which draws attention to the polished edges of the case. In terms of function, the bracelet is a huge improvement over the previous generation. It includes two useful innovations that made their debut in the time-only Santos – the patented QuickSwitch and SmartLink mechanisms. With QuickSwitch, the bracelet or strap can be easily removed from the case by simply pressing a tab between the lugs and sliding it upwards. And by reversing the motion, it snaps back in place with a reassuring click.

The downside of QuickSwitch is the lack of strap options – only Cartier straps with the proprietary lug attachment will fit. That means more diverse or less expensive alternatives are ruled out. The tab for QuickSwitch

SmartLink allows the bracelet to be sized without any special tools. Each link can be removed by depressing an oblong push-piece on its underside that releases the horizontal bar securing the link. The push-piece is large enough that this can be done with a finger.

Because the clasp is hidden, it lacks a fine-adjustment mechanism, and neither are half links available. That means getting an absolutely perfect fit might be difficult for a minority of wrists. 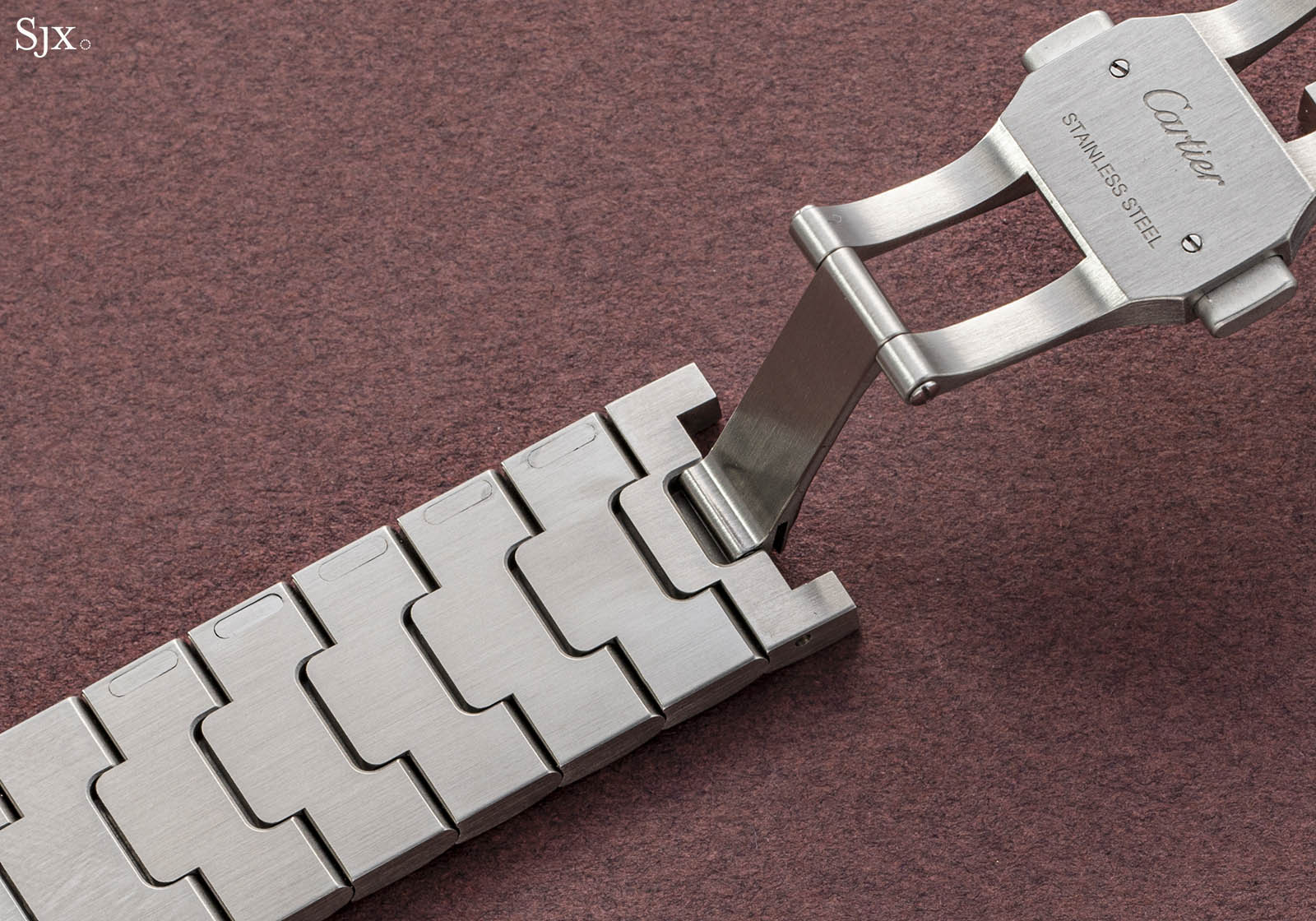 SmartLink buttons on the edge of each link The hidden clasp under the double “C” logo

While the Santos 100 Chronograph was powered by an ETA 7753, a variant of the 7750 with rearranged registers, the new model is powered by the automatic 1904 CH MC produced by ValFleurier, the movement manufacturer that’s a sister company of Cartier.

The 1904 CH MC made its debut in the Calibre de Cartier Chronograph of 2012, and can also be found in the Piaget Polo S. But the version found in the Santos chronograph has obviously been modified here to relocate the pushers, and this particular version of the movement isn’t found elsewhere, yet. 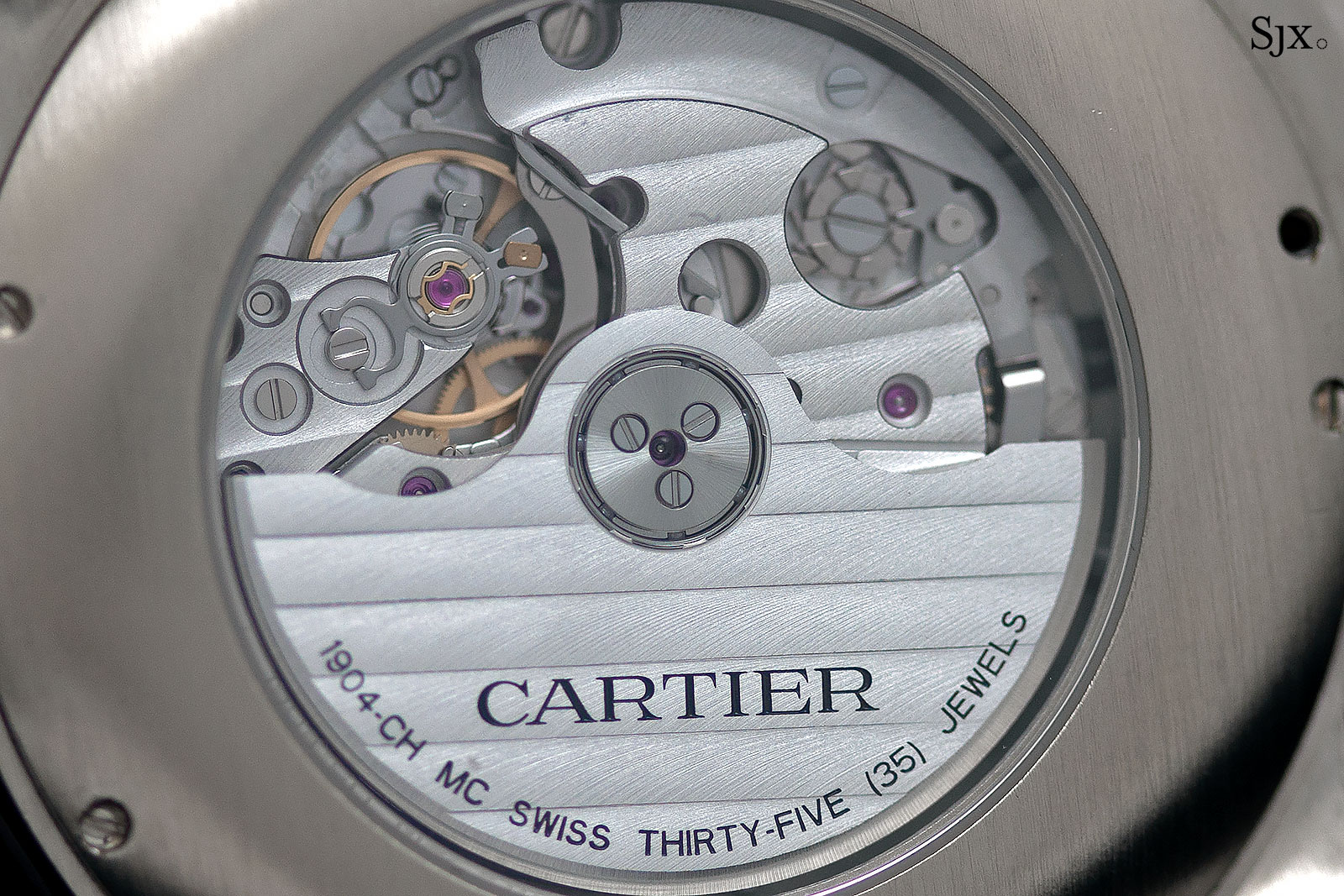 Based on Cartier’s workhorse 1904 MC movement, the 1904 CH MC is has the typical features of a mid- to high-end automatic chronograph, namely a column wheel and a vertical clutch. While technically competent and robust, the movement is industrially finished and is hidden behind a solid case back.

While the Santos de Cartier was never really intended to compete in the luxury-sports watch segment – it came along before the segment was invented, and was always more affordable than the average – it makes a strong case for itself, no pun intended. The sheer history as well as integrity and sophistication of the Santos design outpaces any other sports chronograph in its price range.

Intrinsically, the Santos chronograph is also well made and finished, especially with the case and bracelet. In fact, the case has a more refined finish than most chronographs in the price segment too.

It is a bit big, so the size isn’t for everyone, but otherwise the Santos chronograph is a extremely well done.

Hands-On with the Cartier Santos 100, Now with an In-House Movement