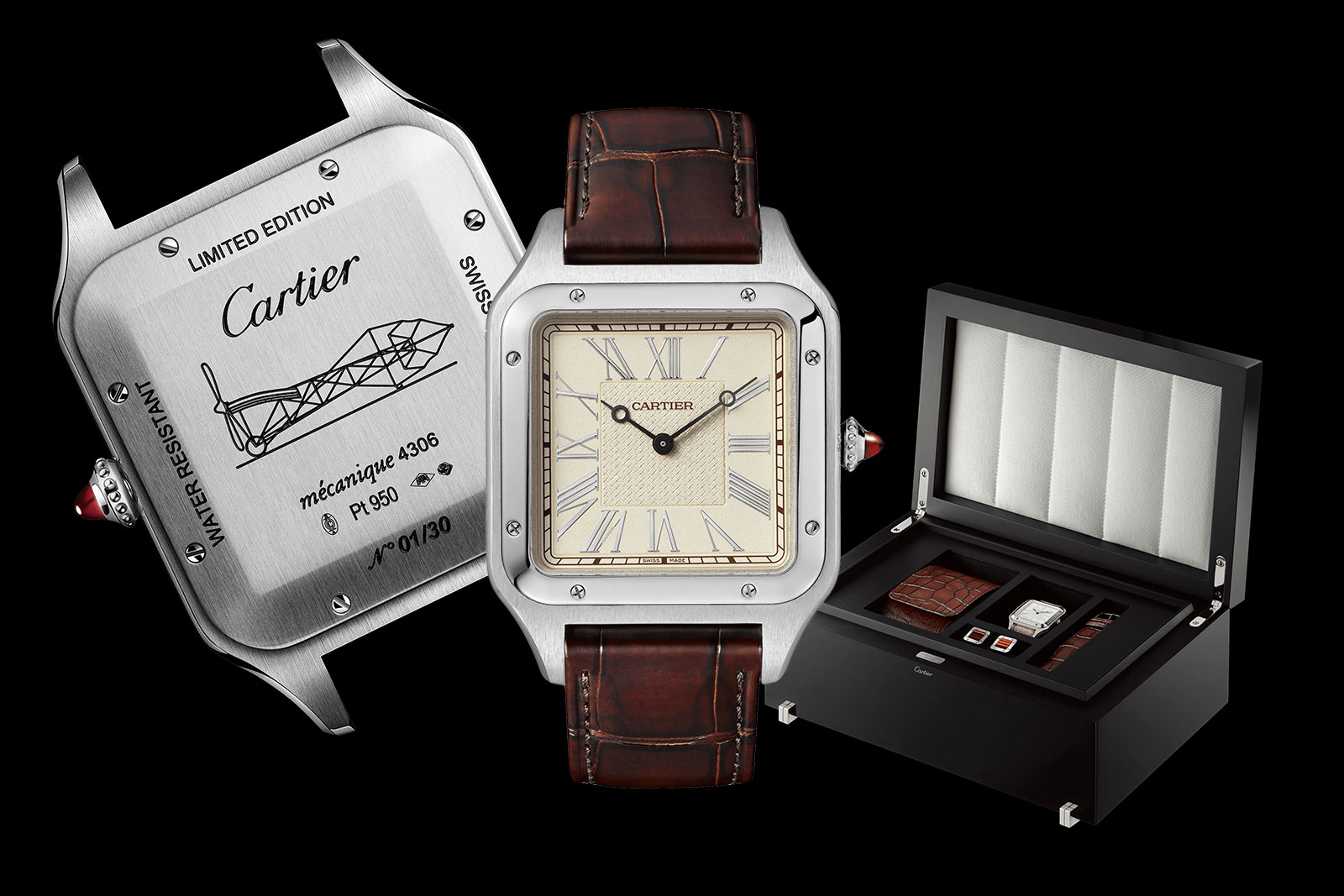 Hot on the heels of the Santos-Dumont XL hand-wind, Cartier has dropped four limited edition variants of the same at Watches & Wonders 2020, each dedicated to one of Alberto Santos-Dumont’s most significant aircraft.

Within just a decade, the pioneering Franco-Brazilian aviator designed and piloted diverse methods of conquering the skies, from balloons and dirigibles to heavier-than-air aircraft. The four flying machines commemorated by the new limited edition Santos-Dumont watches each represent a different milestone in his career, starting with his first balloon, the Brésil of 1898, to his greatest feat, the La Demoiselle plane of 1908. 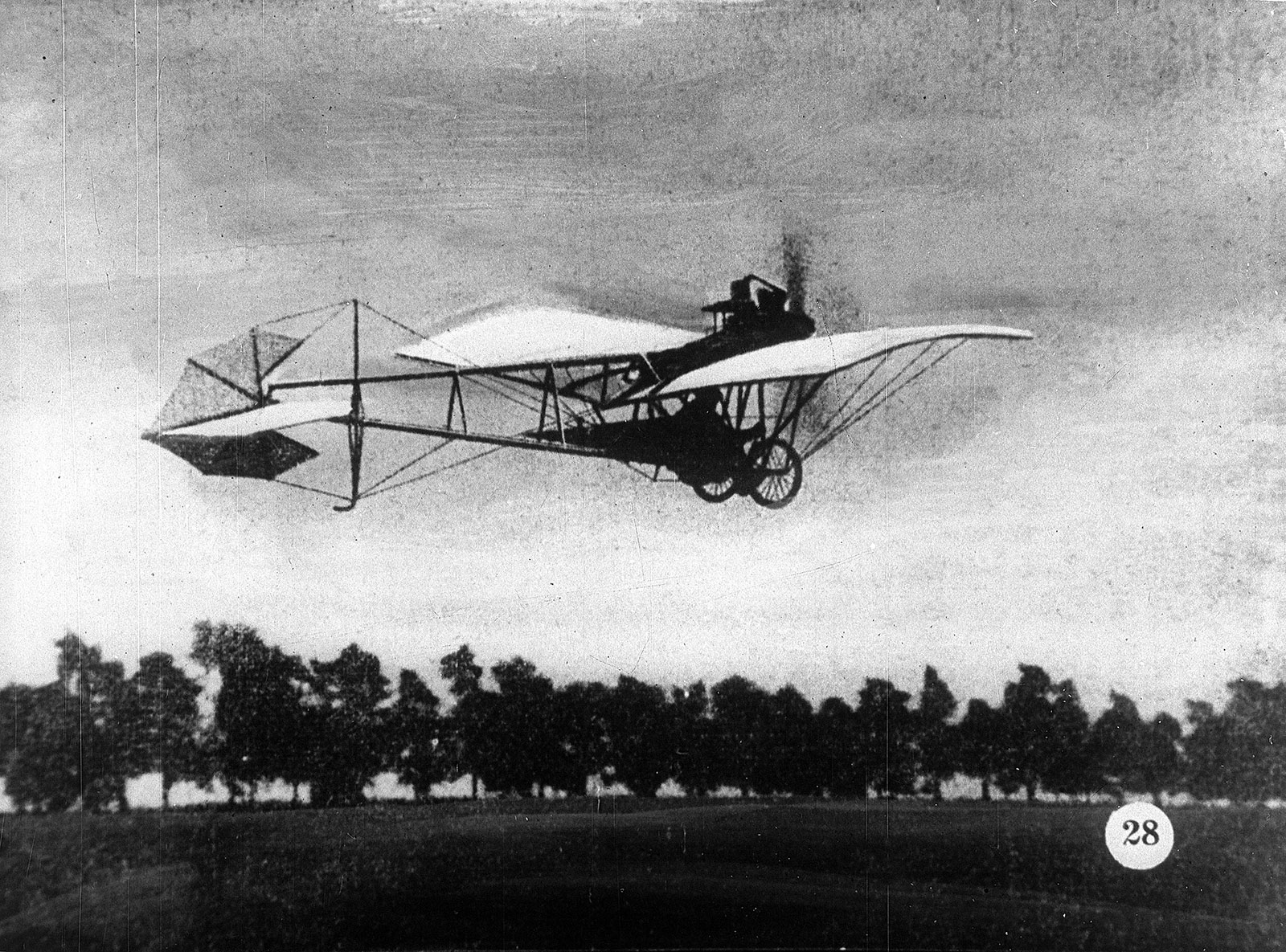 Increasing in edition size as the price decreases with the preciousness of the case, all four editions are mechanical, powered by the ultra-thin 430 MC found in the Santos-Dumont XL, which is actually a Piaget 430P.

Though they share the same movement, the editions are not all the same size. The first three are in the large Santos-Dumont case, with dimensions of 43.5 mm by 31.4 mm, perfectly appropriate for a modern-day dress watch, offering just the right balance between elegance and presence.

The last and most expensive edition, on the other hand, is platinum and XL size, meaning it is 46.6 mm by 33.9 mm. 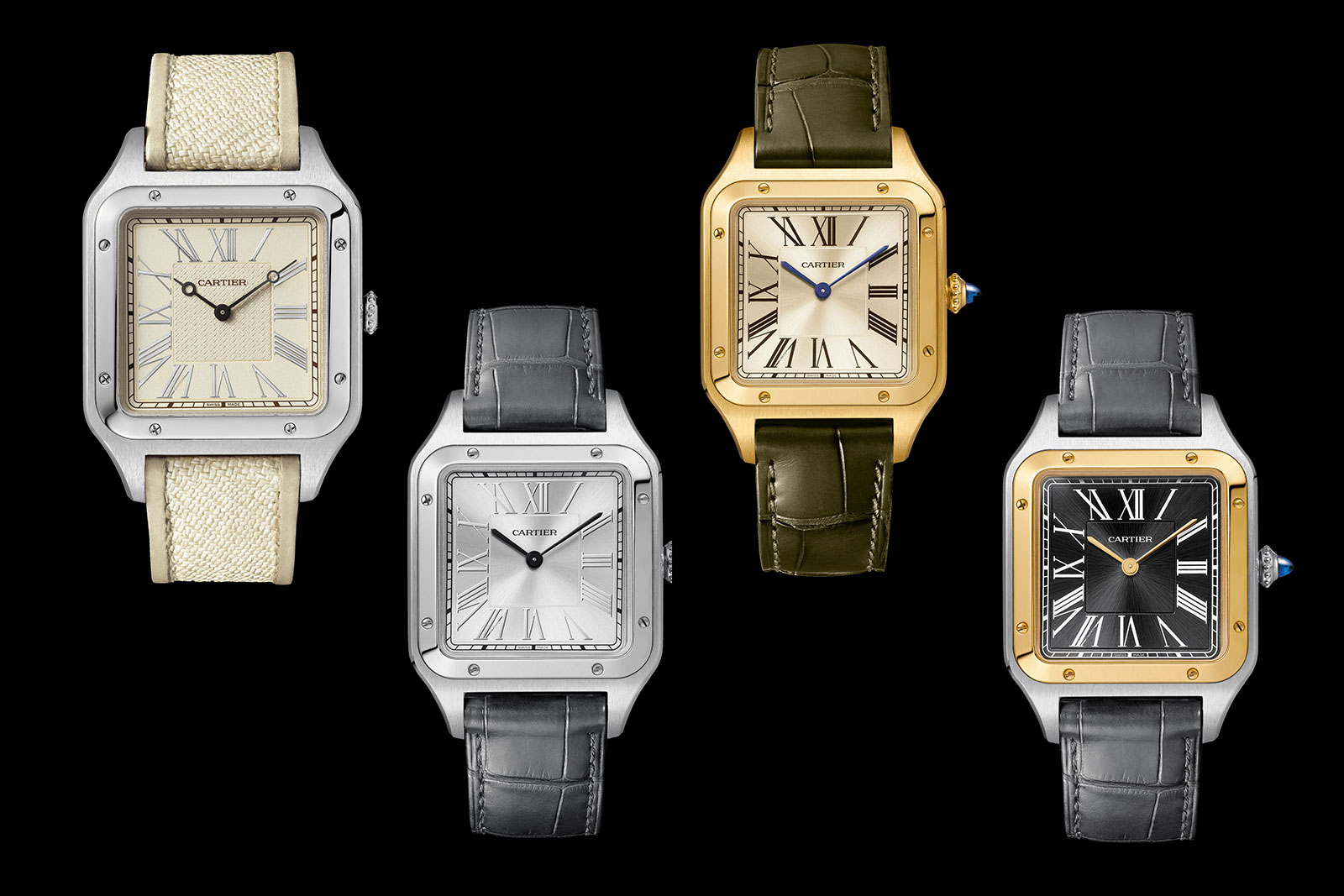 Santos-Dumont XL in platinum (extreme left), and the trio of large-size editions

Limited to 100 pieces, “Le Bresil” is named after Santos-Dumont’s first flying machine, a hot-air balloon notable for its small size and light weight that first took flight in 1898.

As implied by the ruby cabochon on the crown, the watch has a platinum case, paired with a silvered dial with a radially-brushed finish. 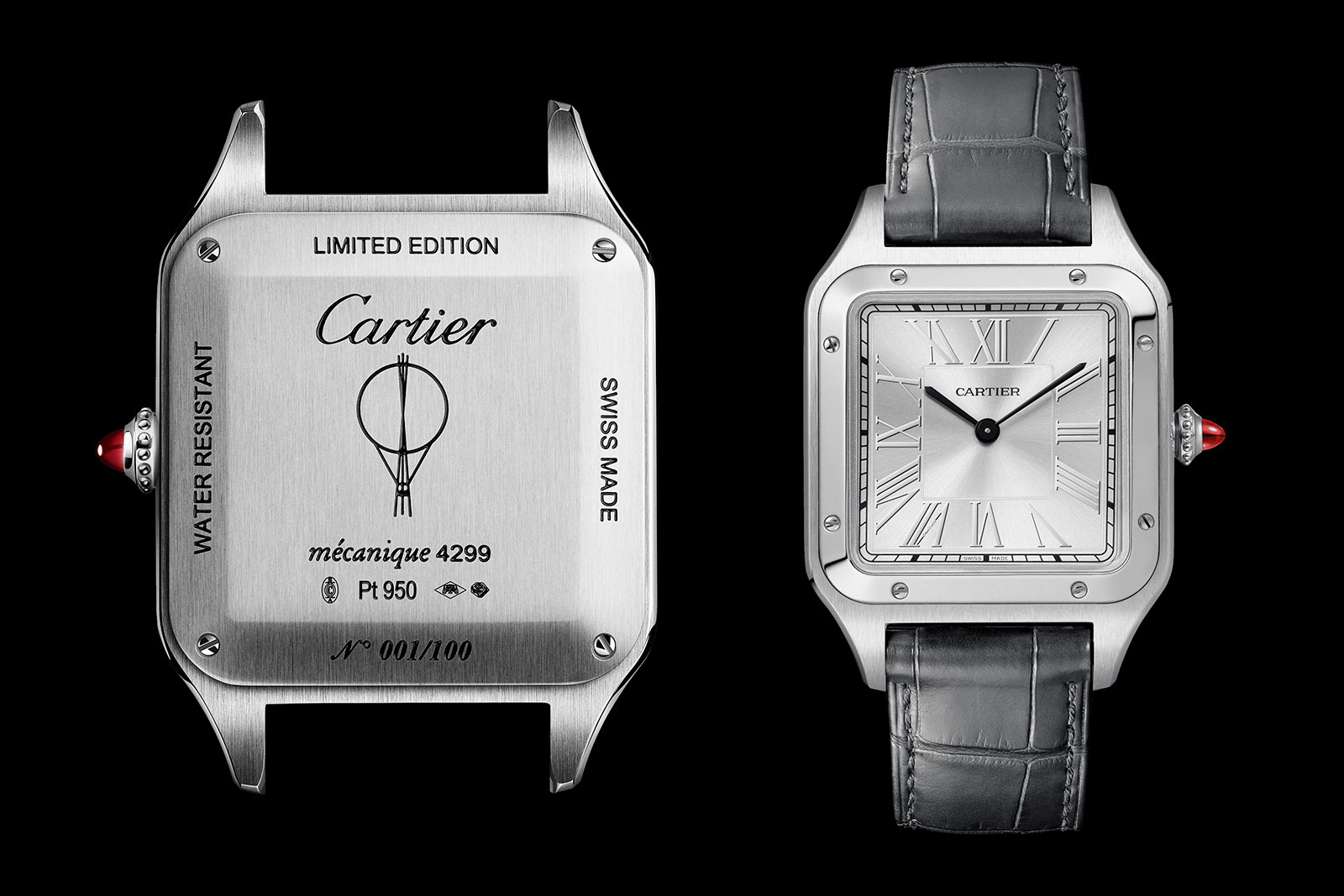 In a first for the Santos-Dumont, which has historically only had printed dials, the dial on “Le Brésil” features applied, shiny Roman numerals. They are combined with a black minute track as well as black sword-shaped hands. 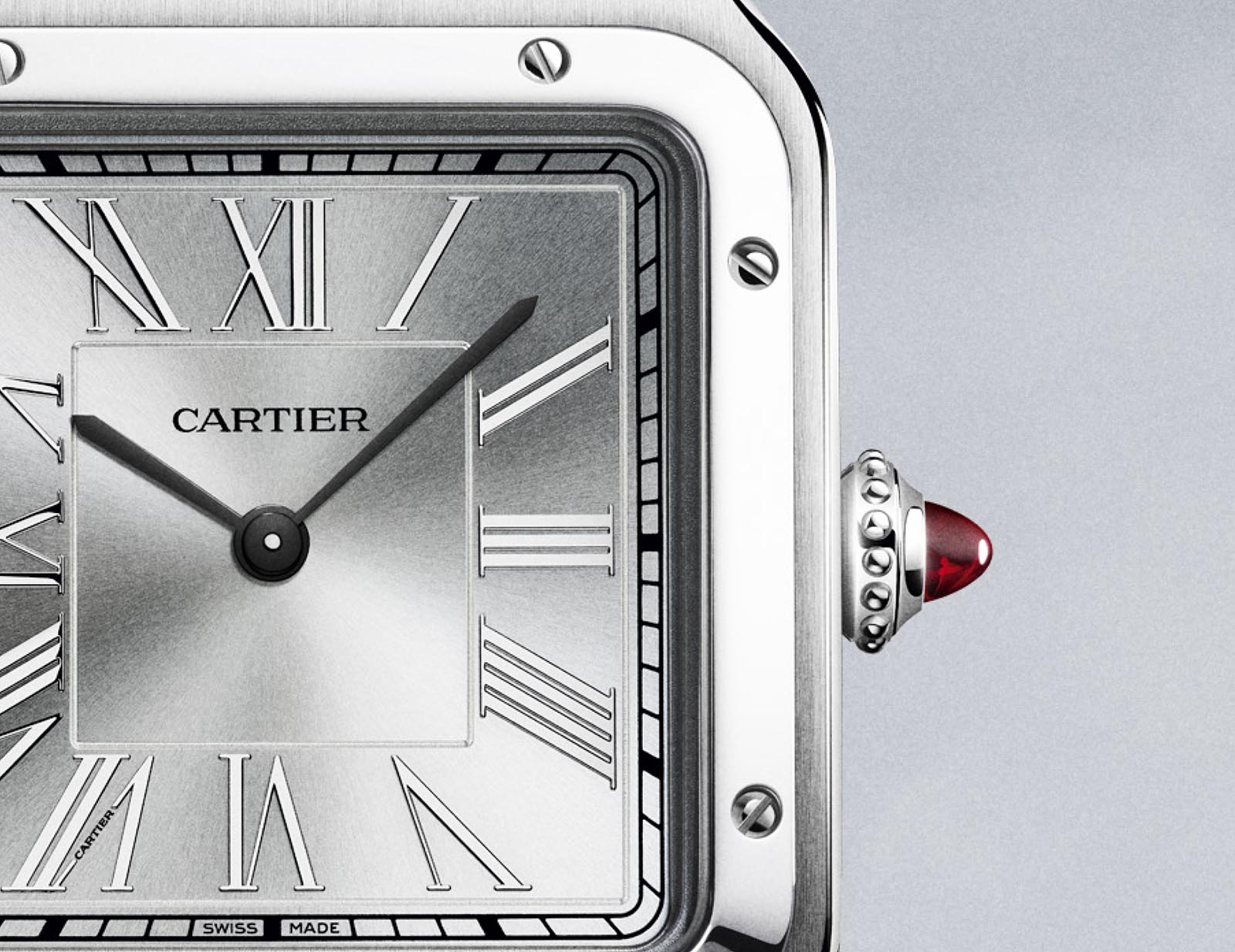 The next watch is a tribute to Santos-Dumont’s ninth airship, La Baladeuse. At a time when automobiles were still a novelty, he created this motorised balloon, or dirigible, in 1903 to demonstrate its potential as a mode of transport. He routinely floated above the streets of Paris in La Baladeuse, using it as a means of personal transport. 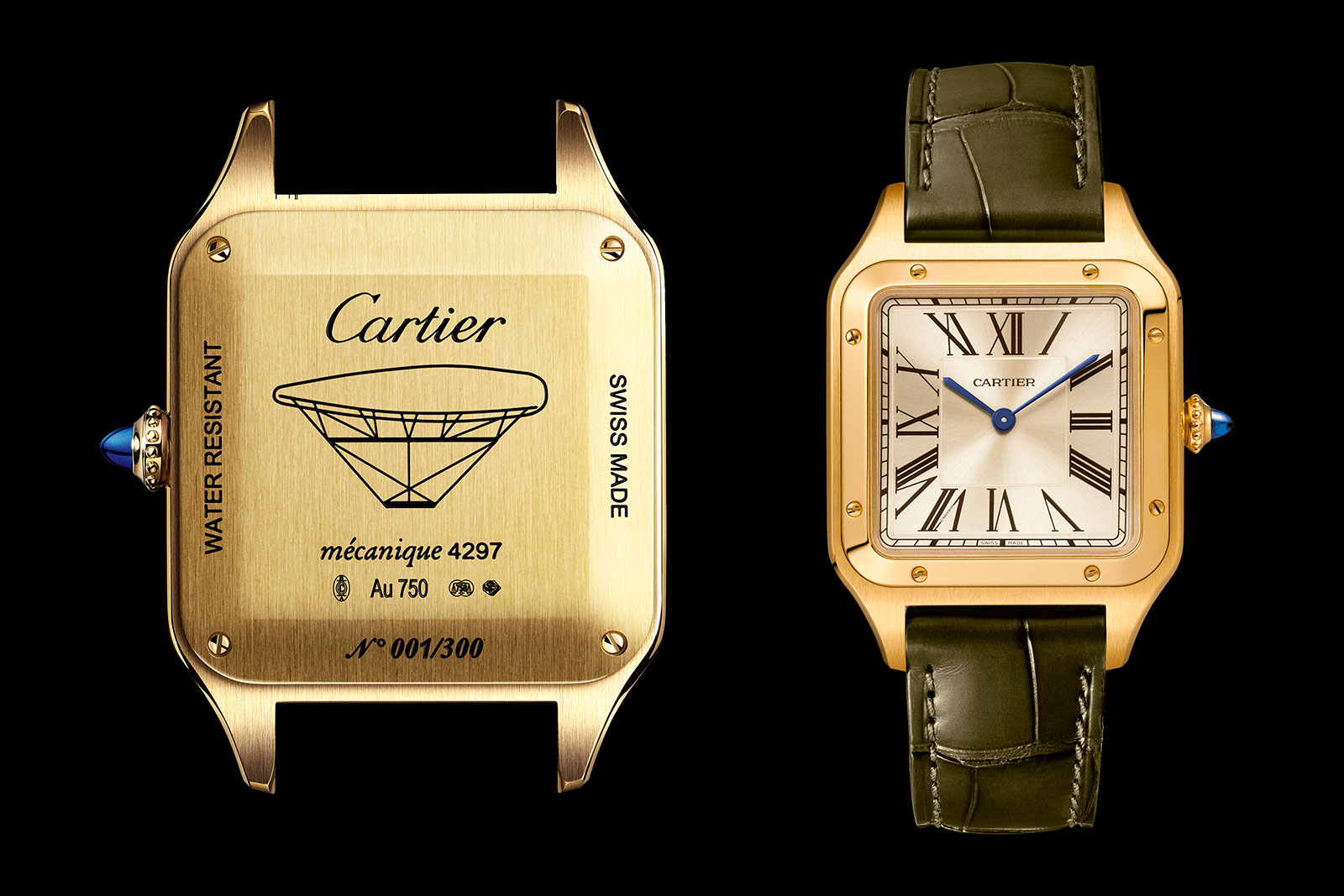 Limited to 300 pieces, the Santos-Dumont “La Baladeuse” is in yellow gold, perhaps the quintessential material for the model, but one that has been long absent. The last time Cartier had a yellow-gold Santos-Dumont in its catalogue was 2006.

Perhaps the most striking iteration of the new editions, this pairs the yellow gold case with a champagne dial featuring printed, black numerals, which together offer a refreshing contrast against the blued hands and sapphire cabochon. 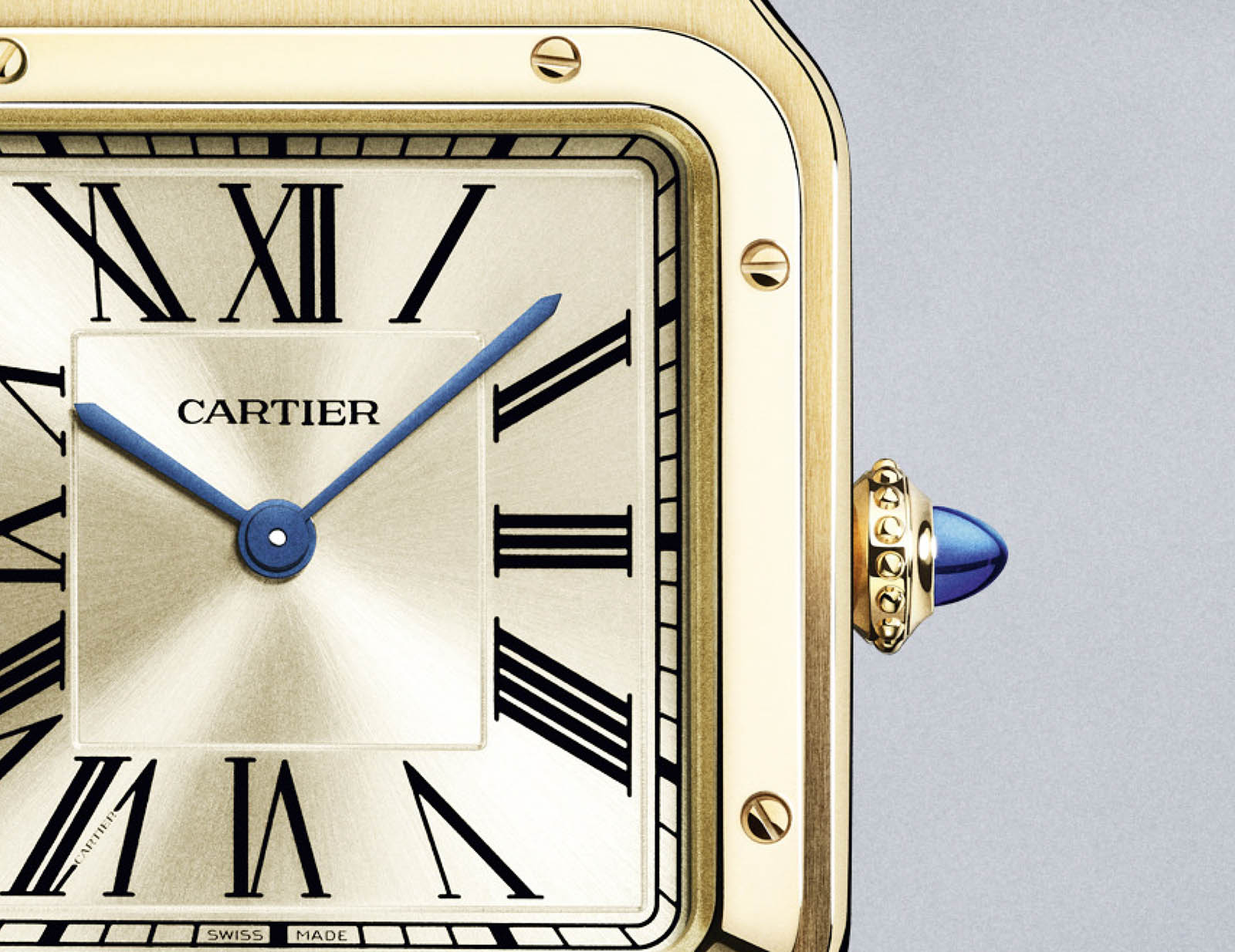 Having experimented with balloons and dirigibles, Santos-Dumont began constructing his first heavier-than-air aircraft. Described as a “kite of compartments”, the Le 14 Bis was made up of cubes formed by wood frame covered in stretched canvas. In 1906, Santos-Dumont took to the skies in 14 Bis and became the first aviator to complete a manned, powered flight of 220 m. 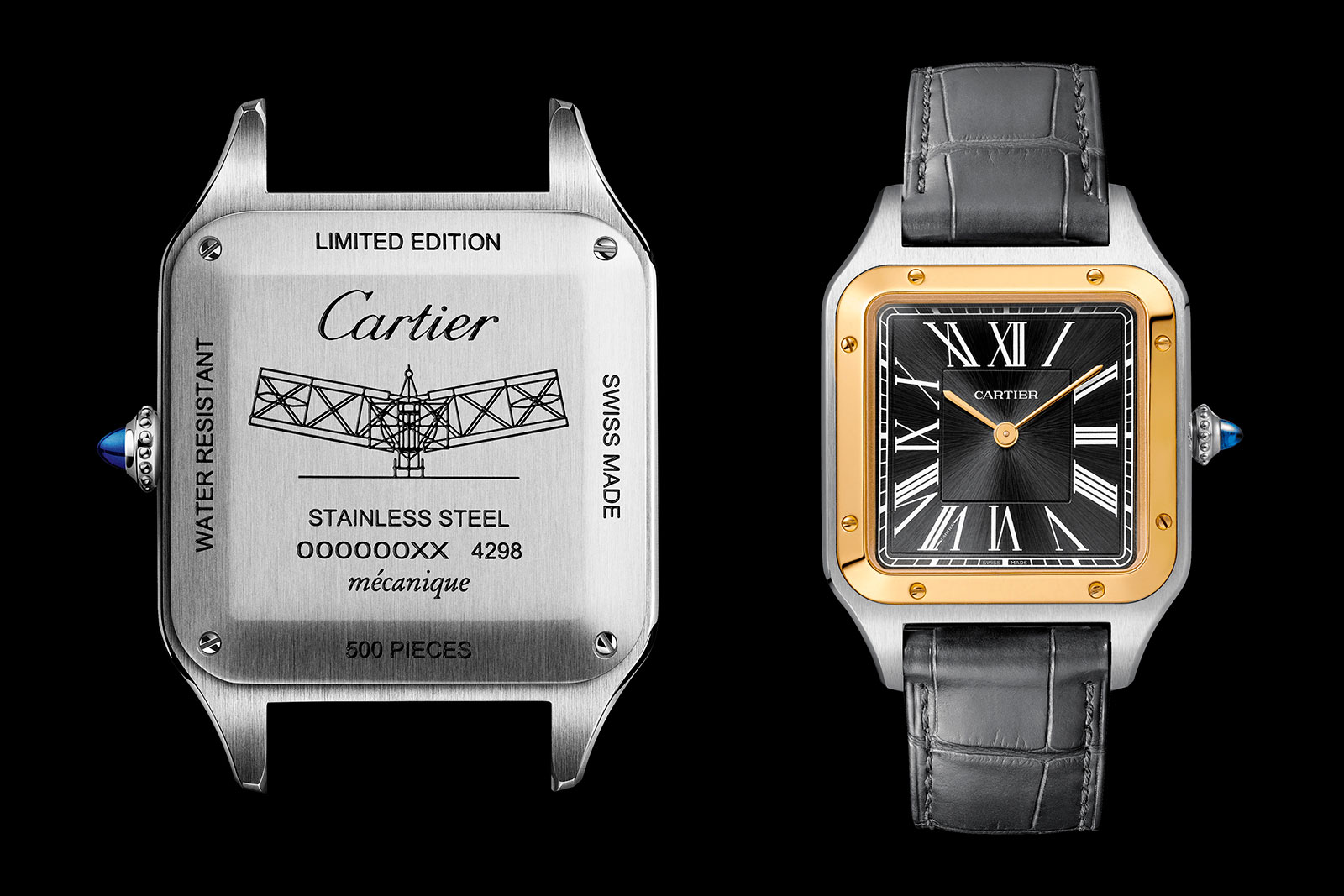 In a nod to that record-setting flight, the outline of the aircraft is engraved on the back of the 500-piece Santos-Dumont “Le 14 Bis”.

The case is steel, but features a yellow-gold bezel and a dark grey dial, which make for a unique combination. The numerals are printed in white while the hands are gilded, offering superb contrast against the dark dial. 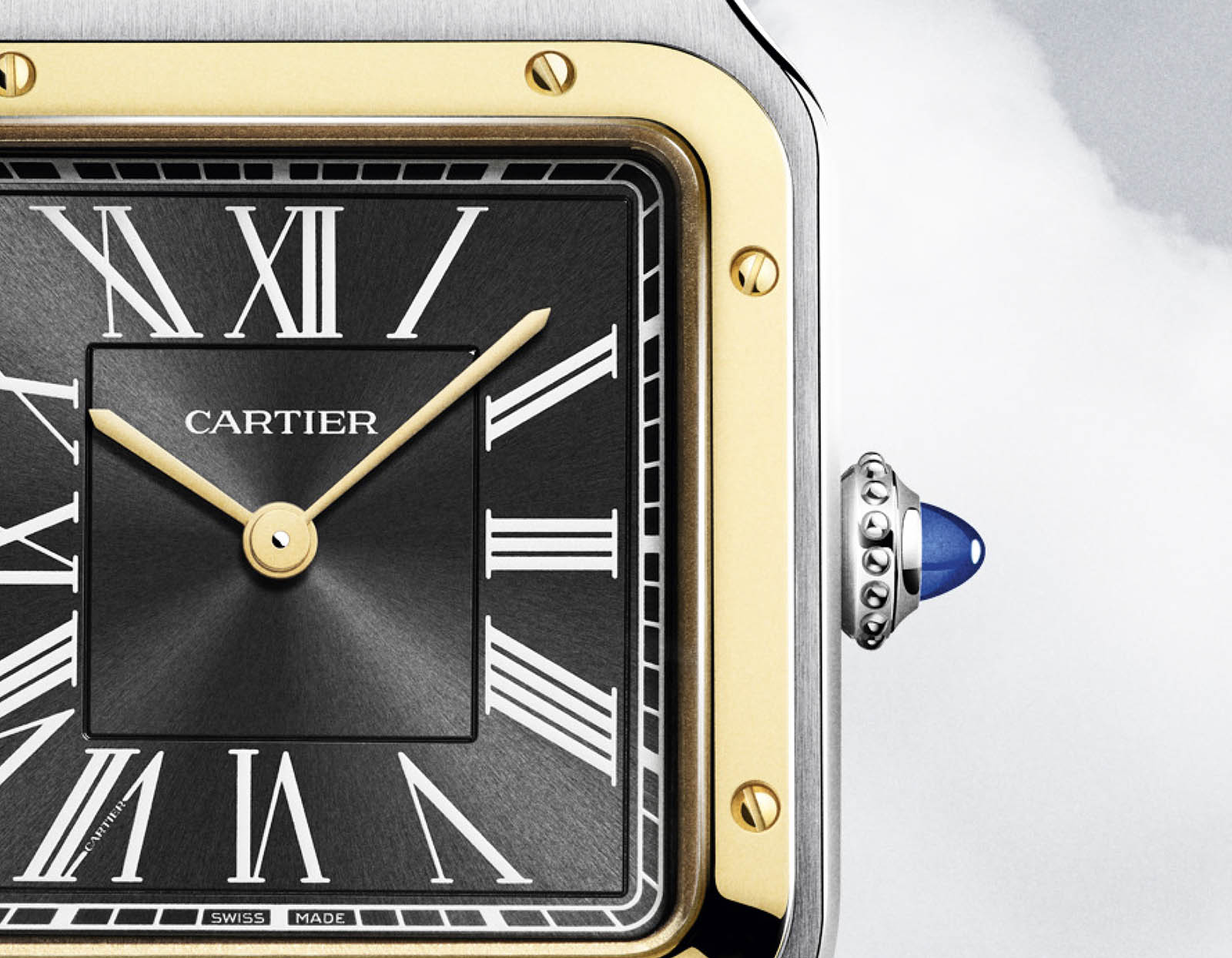 The final watch in the series is the largest, priciest, and most uncommon, with just 30 made. Presented in an XL-size platinum case, the Santos-Dumont “La Demoiselle” remembers the aviator’s most successful aircraft, which was one of the first ever to be serially produced, albeit selling in modest numbers. 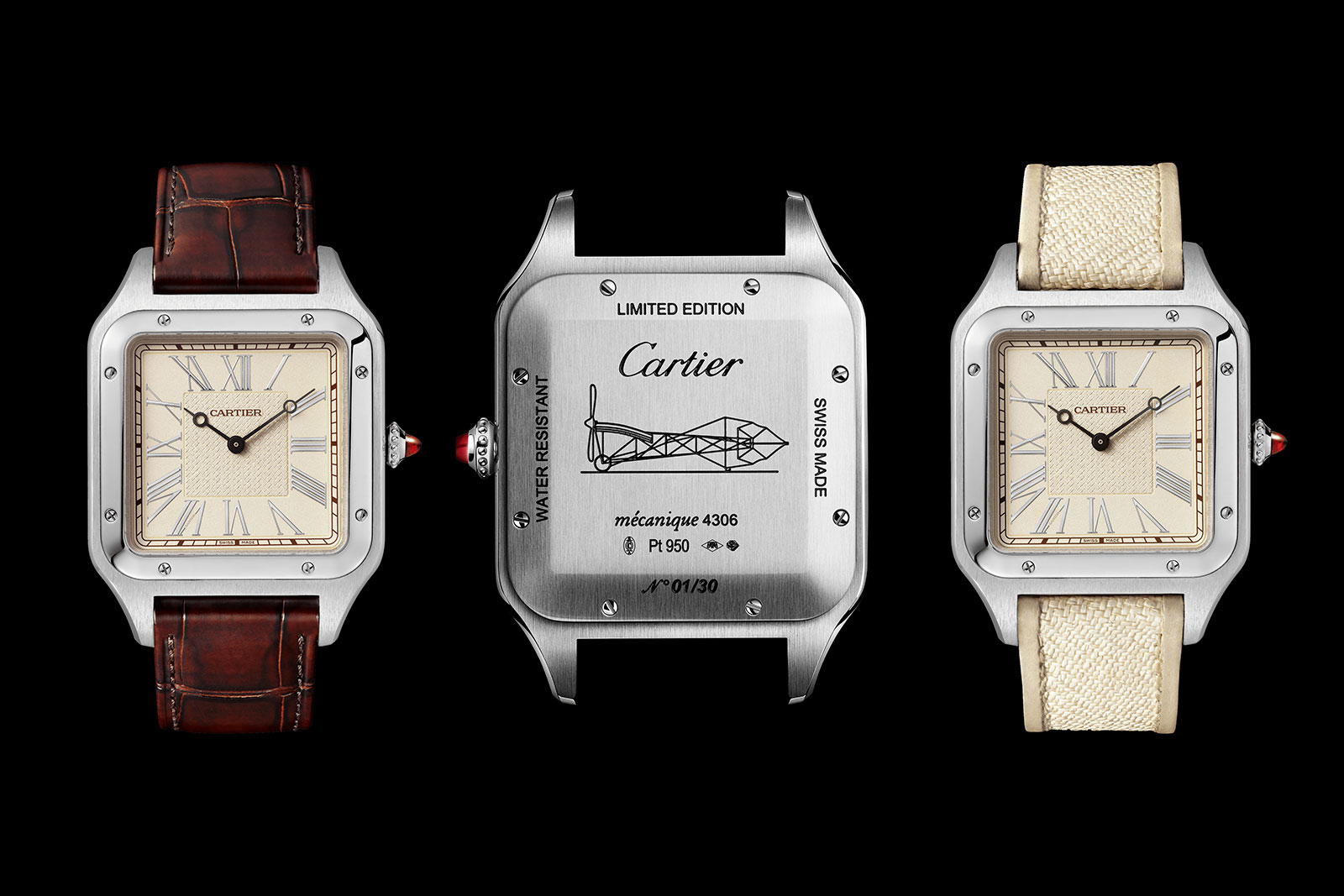 “La Demoiselle” distinguishes itself not only with the case size and material, but also a special dial and strap motif, in addition to the aircraft emblem on the case back.

Meant to evoke the texture and colour of Santos-Dumont’s trademark Panama hat, the central portion of the matte, cream dial features a guilloche pattern, while the strap is a rendered in a Panama-weave fabric.

Crucially, the model is also distinguished by a pair of blackened Breguet hands, as found on the original Santos-Dumont. And more unusually, the traditional Cartier secret signature within “VII” on the dial has been replaced by “Santos”. 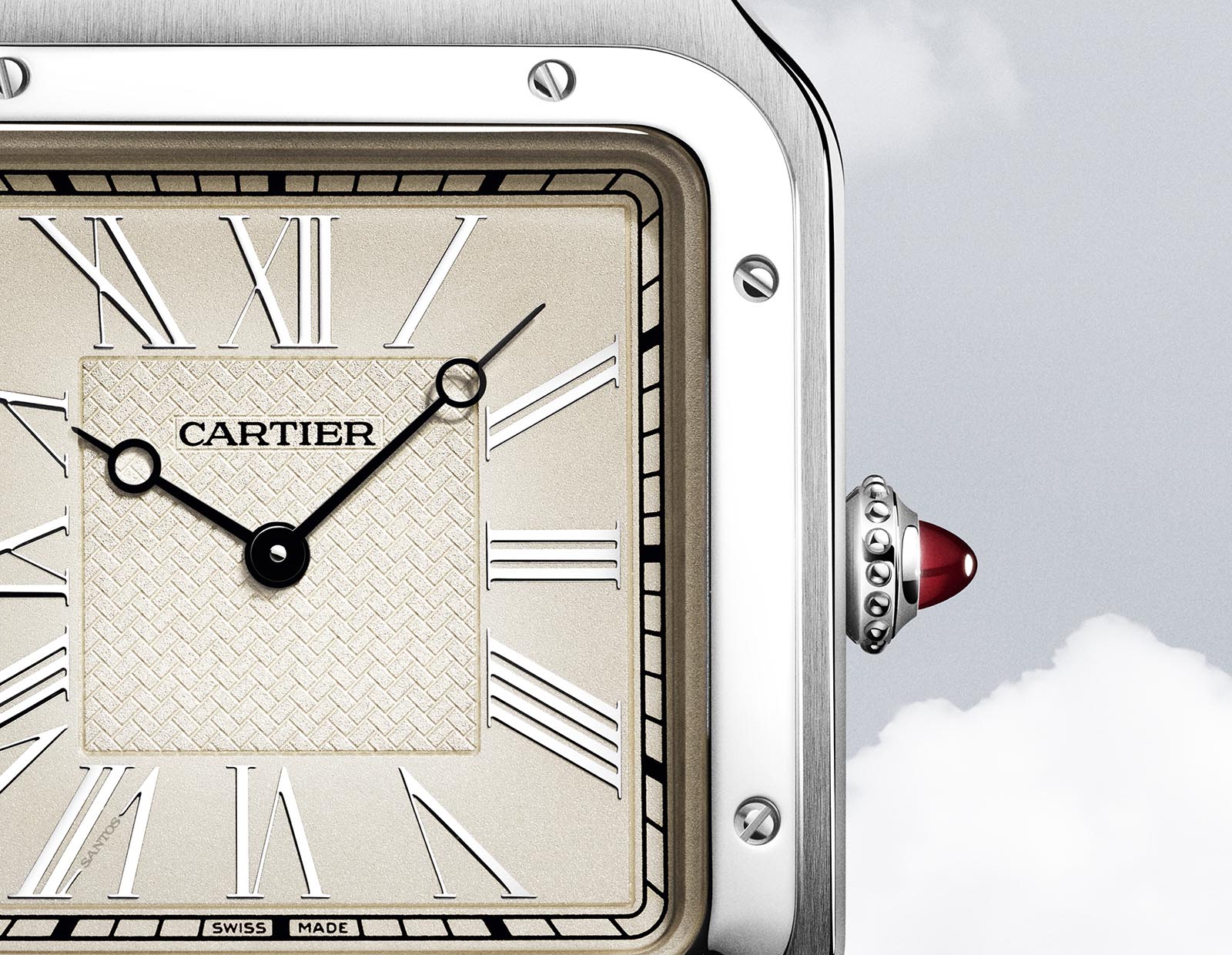 But beyond the watch itself, the Santos-Dumont “La Demoiselle” is delivered as part of an elaborate boxed set worthy of its elevated price.

It sits inside a lacquered wooden box that also contains an alligator-hide watch pouch and pair of cufflinks in 18k white gold with red tiger-eye inlay. 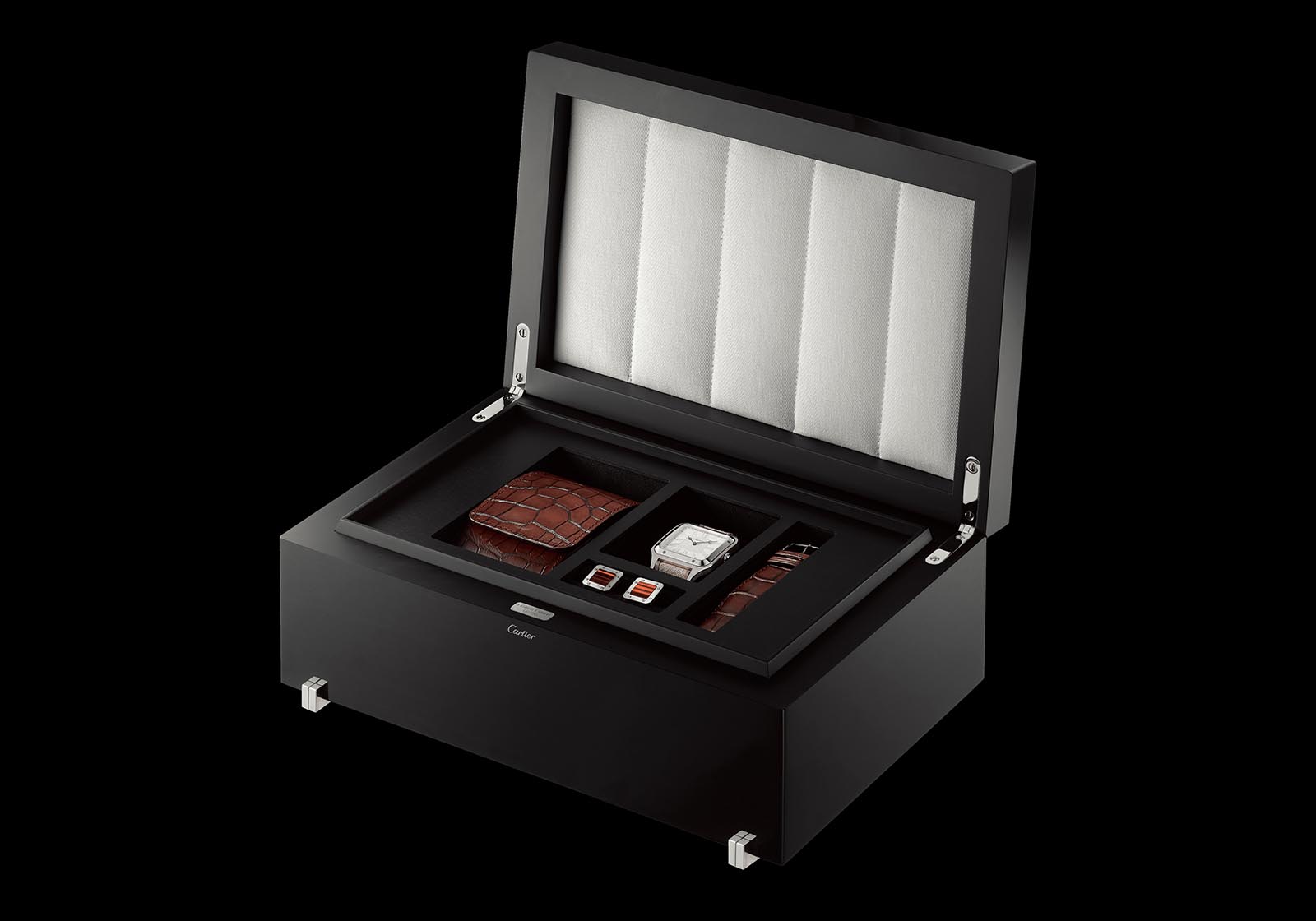