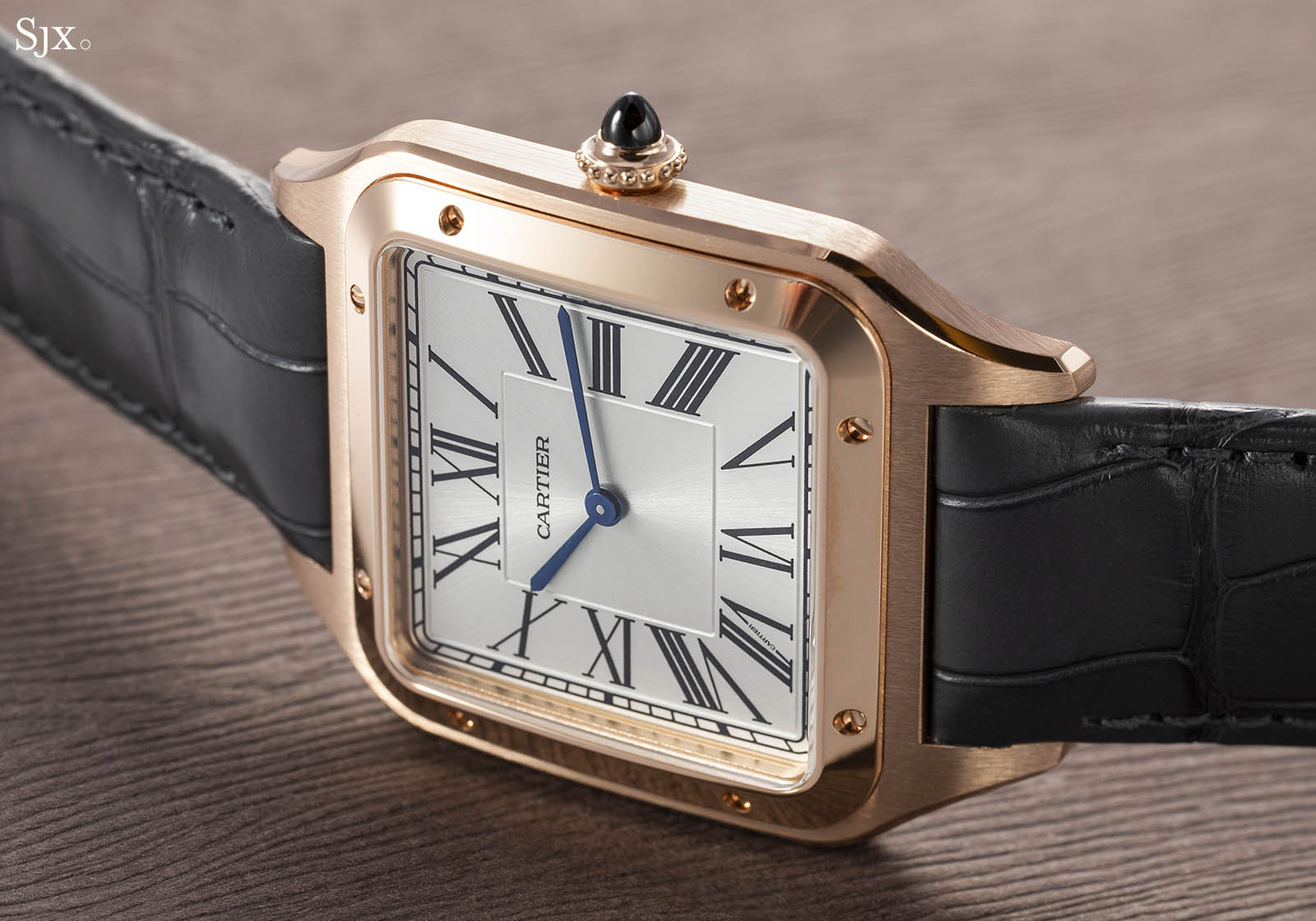 Though the Brazilian pilot got his wristwatch in 1904, it took until 1911 for the design to be sold commercially. For most of the century since, the Santos-Dumont has been part of the Cartier line-up in one way or another, often in gold but occasionally in platinum (one outlier was a special edition in titanium with a skeleton movement). The most recent facelift happened in 2005, which saw the unveiling of a version without a bezel.

The new Santos-Dumont XL in all three versions

Last year, the latest generation of the Santos-Dumont was unveiled, marking a return to the iconic Santos bezel with screws. For the first time ever, the Santos-Dumont was available in steel as well as two-tone steel and gold, along with the traditional all-gold case. However, the new Santos-Dumont didn’t quite receive unanimous acclaim because it was quartz movement. But now Cartier has finally unveiled what was long expected, the mechanical Santos-Dumont XL.

Measuring 46.6 by 33.9 mm and just 7.5 mm in height, the Santos-Dumont XL is bigger than the quartz models but is likewise available in three metals – steel, 18k pink gold, and the bi-metal combo of steel with 18k pink gold bezel. 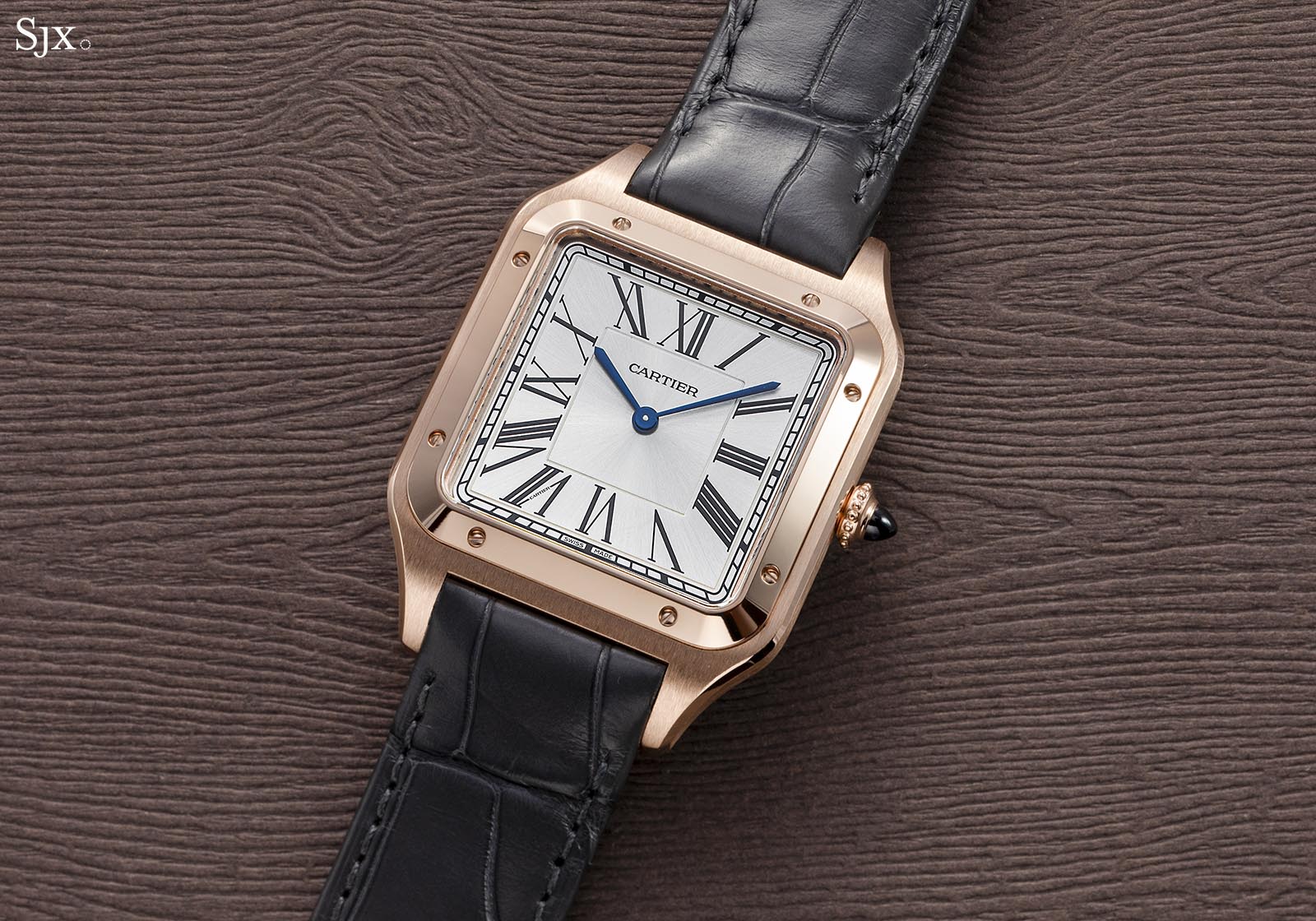 The finishing of the case is classic Santos with alternating brushed and polished surfaces. The top surface and flanks of the case are brushed, separated by a wide polished bevel that accentuates the shape of the case, while the bezel is mirror-polished.

One subtle difference between the new XL model and the quartz versions is the fit of the strap: the strap for the XL watch has metal insert at both ends, allowing the strap to integrate into the case without a gap or play. 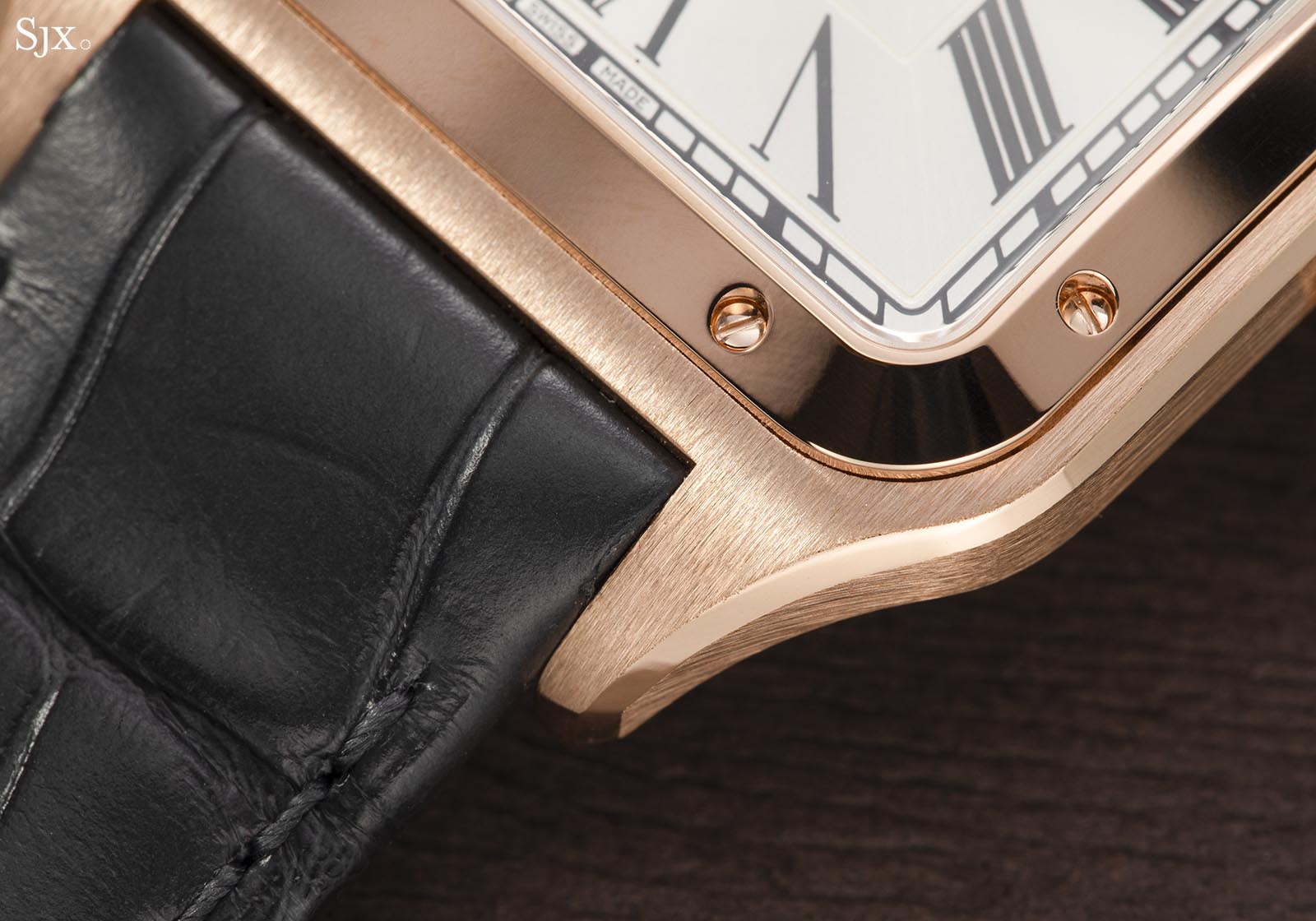 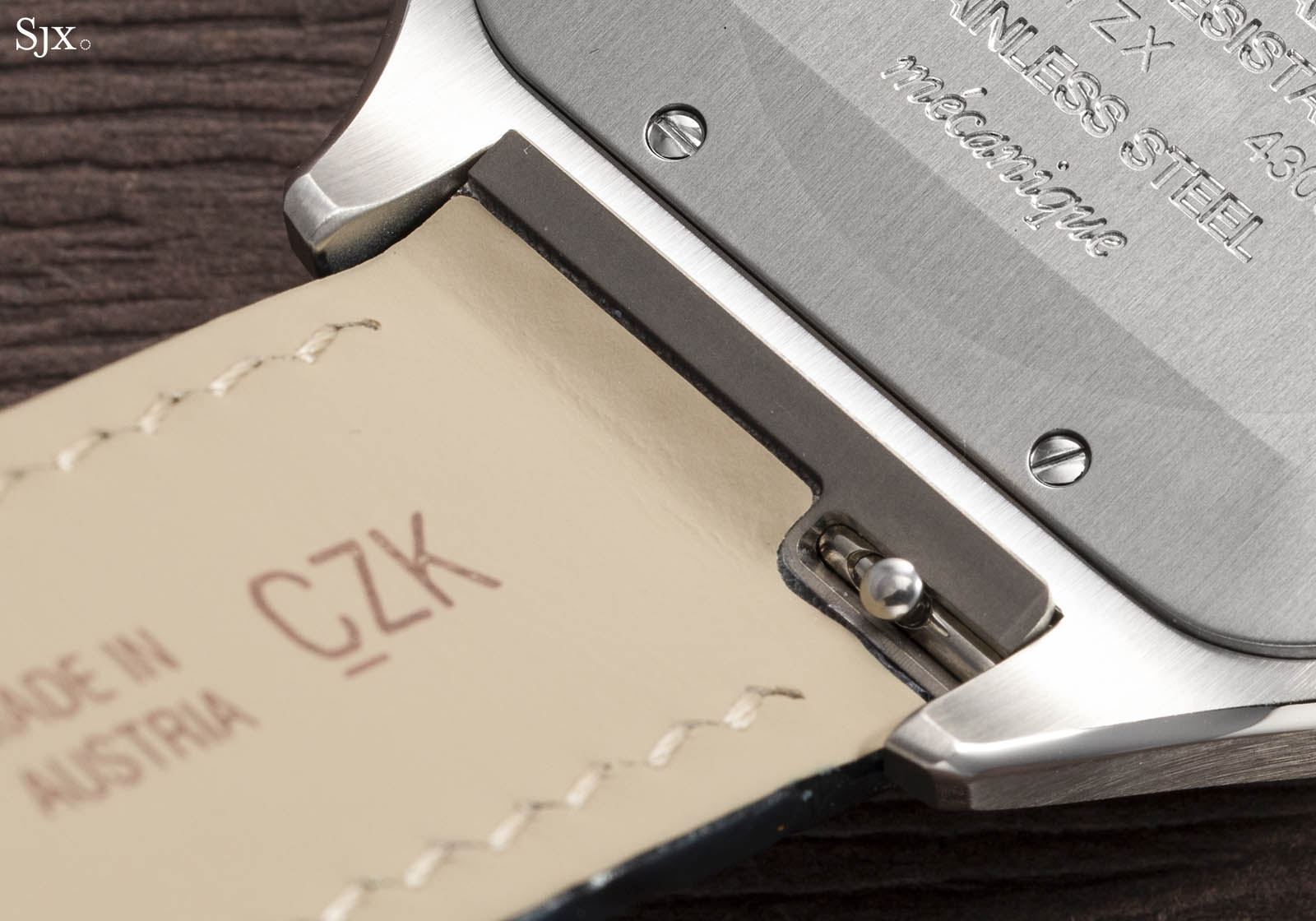 But perhaps the most striking aspect of the watch is the silver, sunray-brushed dial – another first for the Santos-Dumont which has historically been offered with either a guilloche or opaline dial. The radial finish further accentuates the elongated, reed-thin Roman numerals, creating a rather distinctive aesthetic. 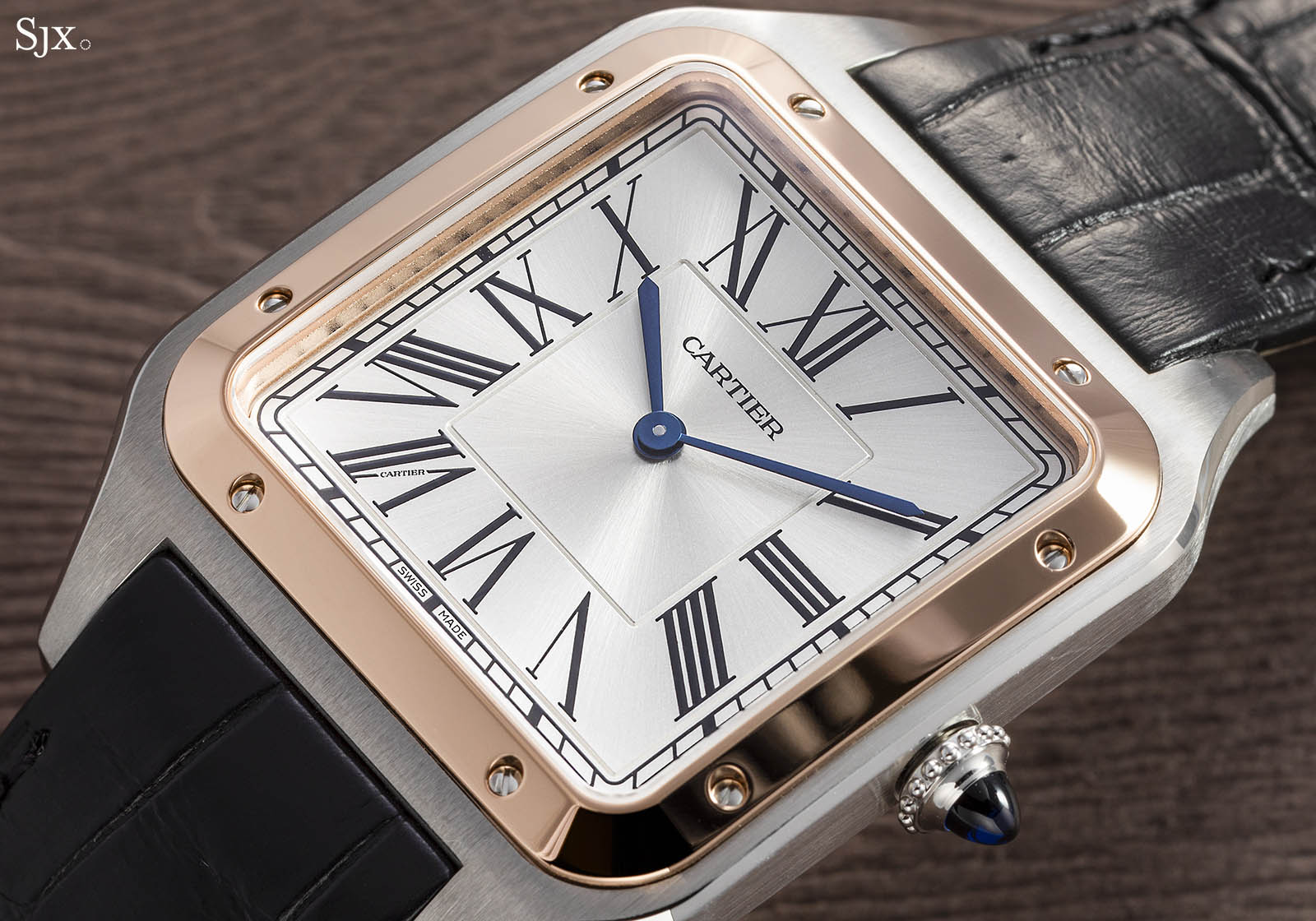 Powering the watch is the hand-wound cal. 430 MC, which is actually the Piaget 430P used in its extra-thin Altiplano. A movement that’s both thin and small, the 430 MC unsurprisingly has a shortish power reserve of 38 hours.

Both the Cartier and Piaget versions of the movement are identical save for the finishing; Cartier’s iteration has its bridges and balance cock decorated with its double “C” logo.

Correction March 23, 2020: The prices in Swiss francs were incorrect in an earlier version of the article, and have been replaced by Euros.