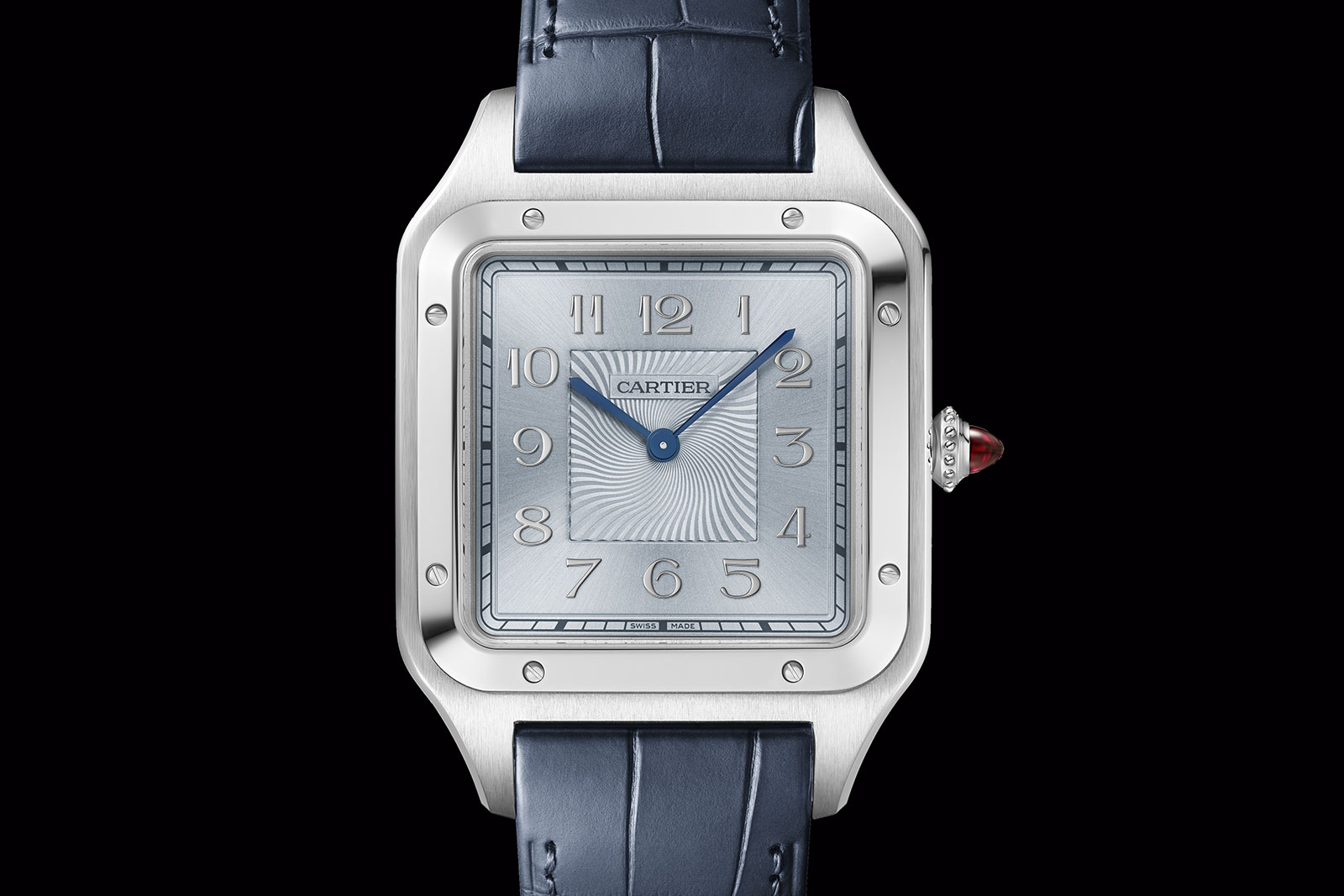 Leaving the Santos Dumont XL distinct from earlier iterations of the same model, the new dial design features a spiral, stamped guilloche in its centre, along with reflective Arabic numerals for the hours. It’s found on both the new editions, one in platinum that’s accompanied by a pair of cufflinks, and the other a more affordable, two-tone iteration in steel and pink gold. 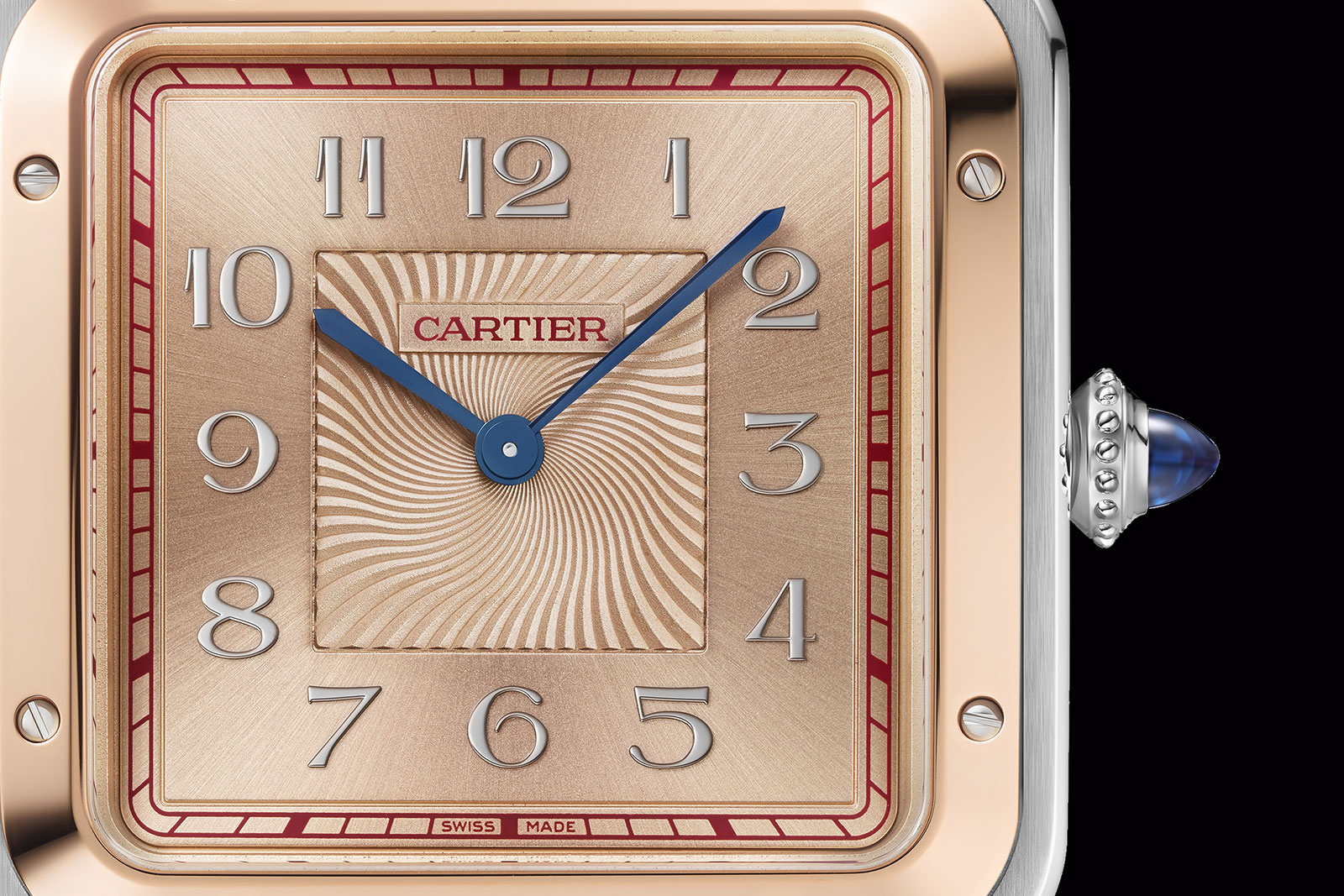 While attractive, most of last year’s Santos-Dumont models were in the Large case size – except for the ultra-pricey platinum, box-set edition – which despite the name is relatively small by modern standards. The Santos-Dumont XL, on the other hand, is a good size that’s large enough while still being thin and elegant.

The pair of new watches are both XL size, making them ideal for anyone who found last year’s trio too small. Though the case design remains identical, Cartier smartly bestowed a new dial design on the new pair, which leaves them looking surprisingly unusual.

Though the dial design is clearly inspired by vintage Cartier watches from the early 20th century, the Arabic numerals are novel for Cartier, which makes the two new models unconventional but still appealing.

I don’t typically like two-tone watches of this style, but the steel-and-gold edition is surprisingly good looking, while also being affordable compared to the platinum version. 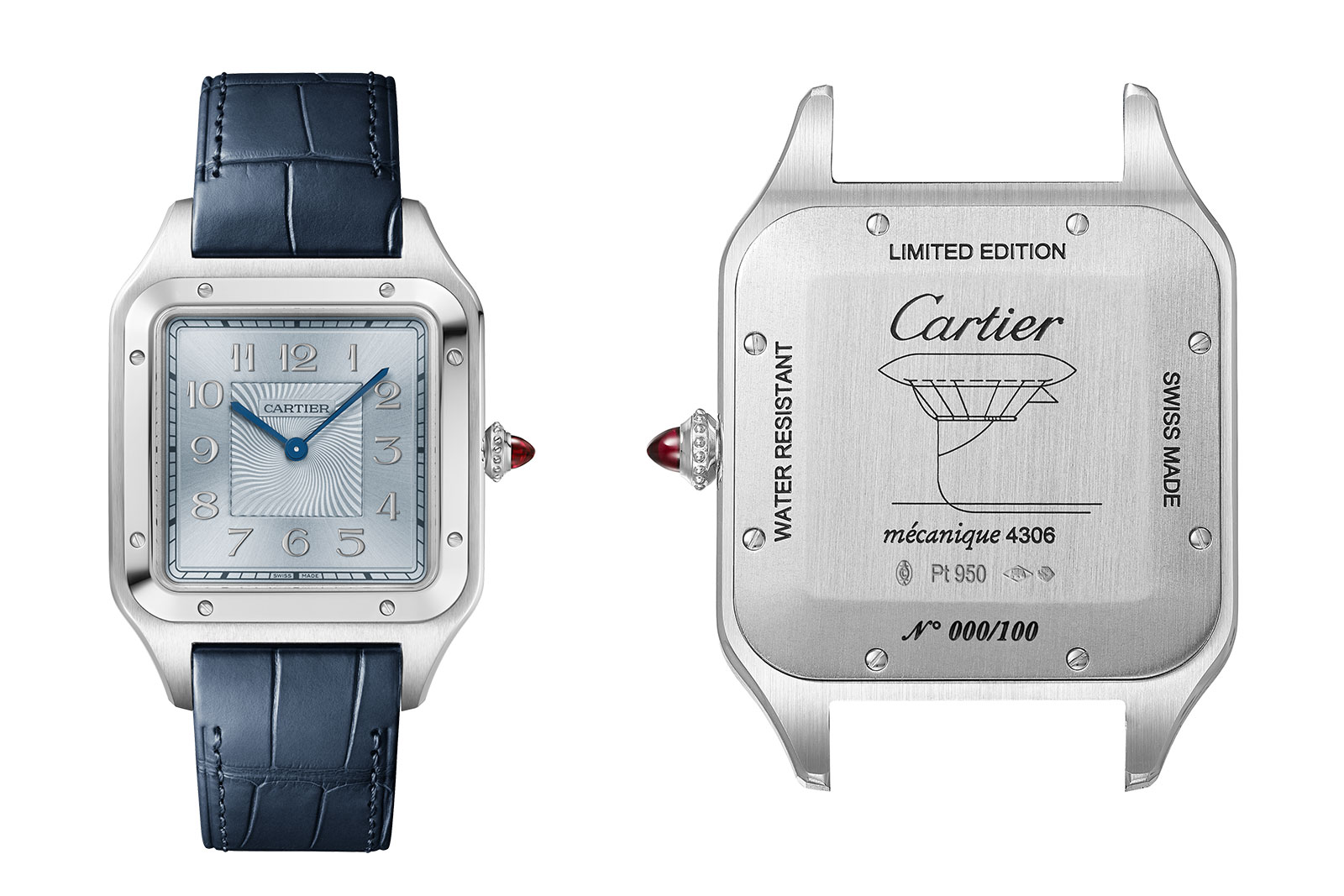 As with last year’s editions, the new models are each named after one of the flying machines invented by Alberto Santos-Dumont, the Brazilian aviation pioneer who was responsible for the creation of the original Santos. Both watches shares the same case that’s 33.9 mm in diameter and just 7.5 mm high. Inside is the 430 MC, which is actually the Piaget cal. 430P, an ultra-thin hand-wind movement with a 38-hour power reserve.

The two-tone model is inspired by the No. 19, an early, lightweight aircraft that was evolved from “La Demoiselle”, the plane that inspired last year’s platinum limited edition. 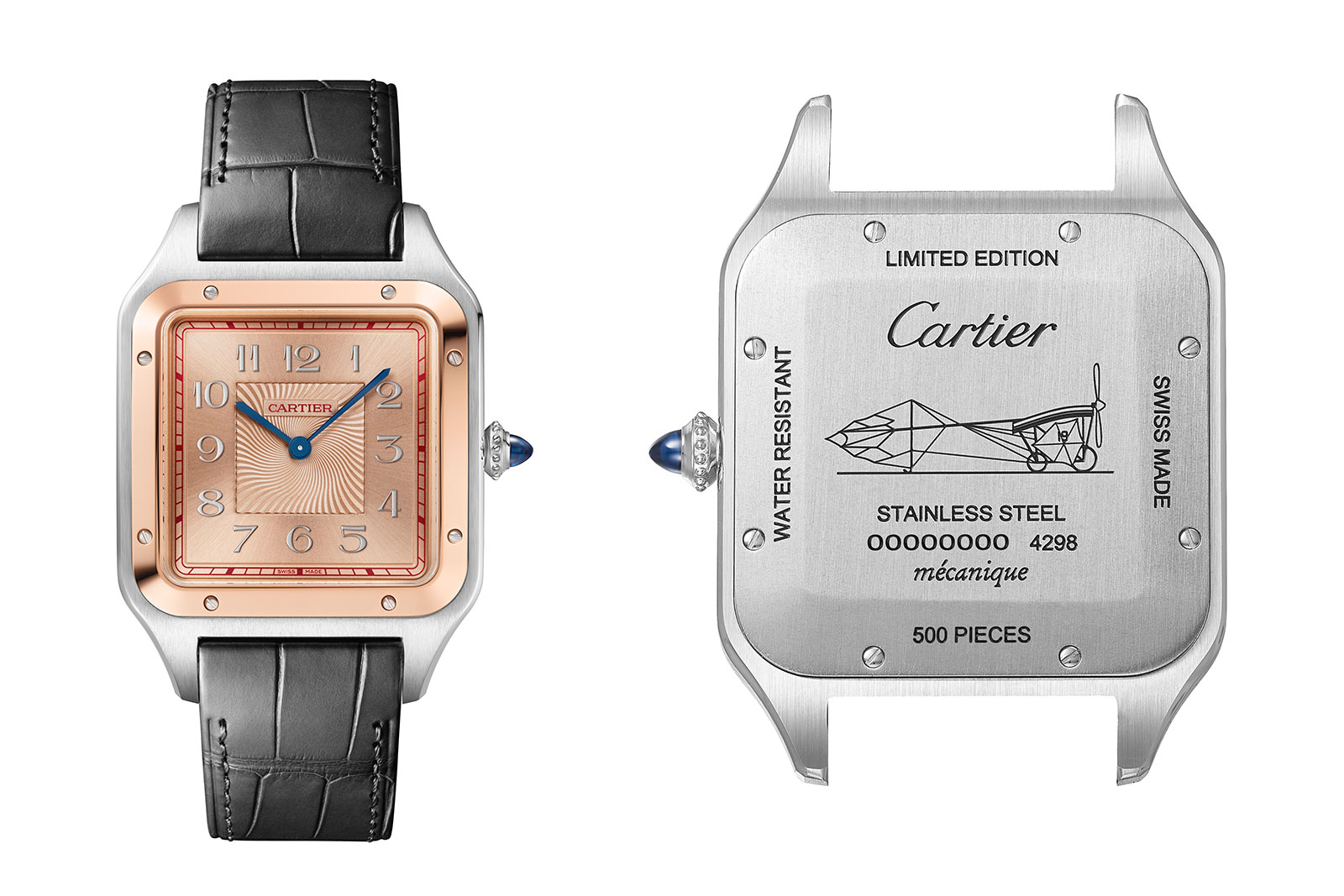 And the platinum Santos-Dumont is inspired by the airship “guide-rope maritime”, which is part of the Santos-Dumont Precious Set.

This is accompanied by a lacquered wood box that includes a pair of 18k white gold cufflinks inlaid with Hawk’s Eye, a type of Tiger’s Eye. And the lid of the box is bears a stylised depiction of the Maritime Guide Rope airship, which is also reproduced on the case back. 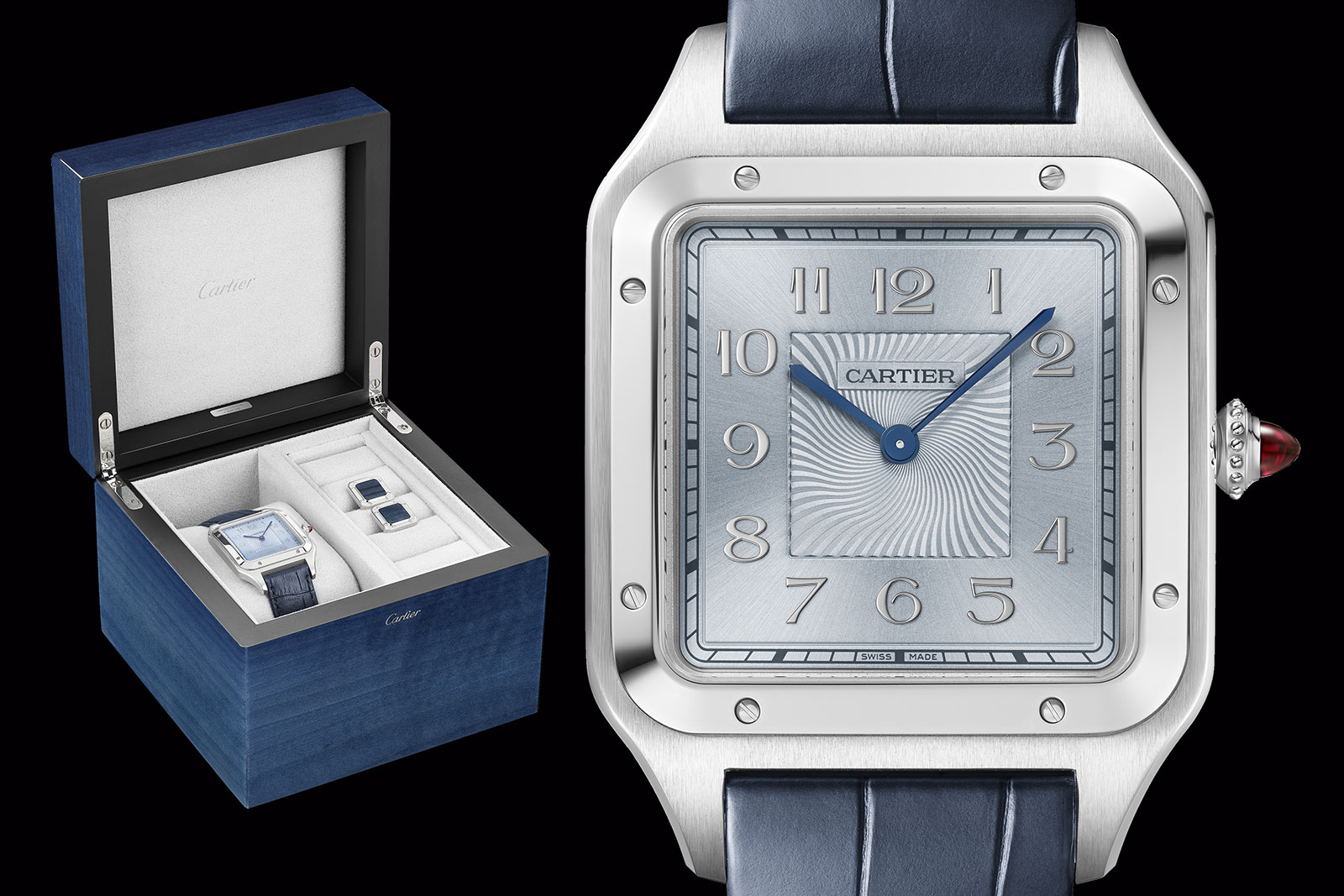 Limited edition: 100 pieces
Availability: From September at Cartier boutiques and retailers
Price: US$31,100; or 42,900 Singapore dollars

Limited edition: 500 pieces
Availability: From June at Cartier boutiques and retailers
Price: US$8,350; or 12,000 Singapore dollars