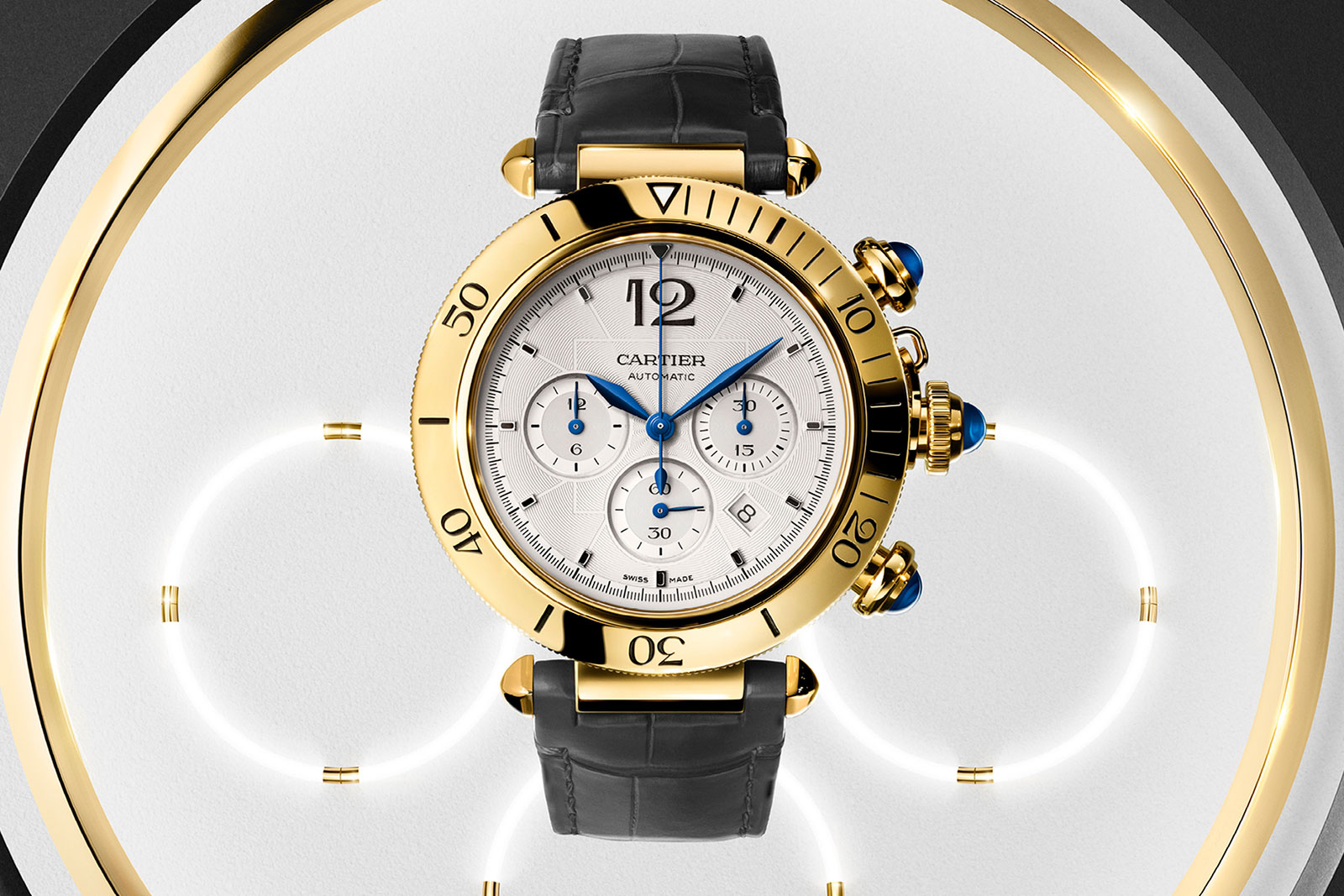 Inspired by the tale of a water resistant sports watch commissioned in 1934 by Thami El Glaoui, the Pasha of Marrakesh – which was actually a rectangular watch – the modern Pasha was penned by Gerald Genta, the man behind many of the most iconic watches of the 1970s and 1980s, which were often considered avant-garde for their time.

One year after the relaunch of the time-only model, the jeweller is debuting the Pasha de Cartier Chronograph at Watches & Wonders 2021. The new chronograph on the wrist

The Pasha Chronograph is an appealing watch. It does wear slightly large at 41 mm and but is surprisingly svelte at just under 12 mm in thickness.

Add to that 100 m of water resistance and a moderate price premium of US$3,500 or so over the time-only model and you realise that the Pasha Chronograph is a compelling package. Granted, the “Vendome” lugs are not to everyone’s tastes, but the Pasha remains as classically Cartier as the jeweller’s form watches. The movement is finished modestly and industrially, a sharp contrast to the dial finishing, which punches above its price point in terms of its detail. Nonetheless, its price of a bit under US$10,000 in steel makes the Pasha chronograph competitive, and also good value.

The Pasha Chronograph measures 41 mm in diameter and 11.97 mm in thickness – it retains the same diameter as the time-only model and gains approximately 2.5 mm in thickness to accommodate the chronograph. That makes it substantially larger than the 38 mm original, though very much in keeping with modern size trends.

The case finishing is identical to that of the time-only Pasha: the case band is horizontally brushed and the broad bezel is in high polish.

The 1985 Pasha was available in two versions – one with a bi-directional rotating bezel, the other with a fixed, smooth bezel. The new Pasha de Cartier Chronograph Watch is modelled on the former, with the bezel having black lacquer-filled engraving and the subtle coining on its circumference.

And like the chronograph of the 1980s, the pushers of the chronograph are capped with blue cabochons. On the steel model, they are spinel, whereas the gold version gets sapphires. As is standard on the time-only model, the Pasha Chronograph has Cartier’s patented QuickSwitch system. By depressing a tab between the lugs, the bracelet can be detached from the case without having to resort to a tool.

In addition, the bracelet also includes a system for tool-less removal of links for sizing, which Cartier calls SmartLink. Both QuickSwitch and SmartLink made their first appearance on the relaunched Cartier Santos of 2018. The QuickSwitch with the button on the back of the lugs

A number of details make the dial feel noticeably upscale. It’s stamped with guilloche that incorporates with the Pasha’s trademark square-in-a-circle motif, while the tiny hour markers are applied.

The lozenge-shaped hands of the 1980s original have been retained, but they are now entirely blued steel, instead of being filled with luminous paint as on the original. The 1904-CH MC is visible through a sapphire case back. A movement designed by ValFeurier, the secretive factory that does mechanical work for almost all Richemont brands, the 1904-CH MC is an automatic chronograph that features all the hallmarks of a modern chronograph movement. This means it has a column wheel and vertical clutch, the former providing crisper, more consistent feel in both pushers, the latter enabling the use of the chronograph functions without a drop in balance amplitude.

That said, despite its twin-barrel configuration, meant to ensure consistent torque, the movement’s power reserve of 47 hours falls significantly short of the of 60-70 hours that’s now the norm.

Similar to last year’s launch, the new Pasha de Cartier Chronograph is eligible for Cartier Care, which entails a warranty of eight years and complementary engraving of the initials on the back. Even the presentation box for the watch can be customised with embossed initials or a significant date.

Additionally, Cartier’s promotional offer of a “complementary full service to Pasha owners, regardless of the year their watch was created” still stands – presumably, this complementary service will not be offered forever, so Pasha owners are advised to act on the offer sooner rather than later.