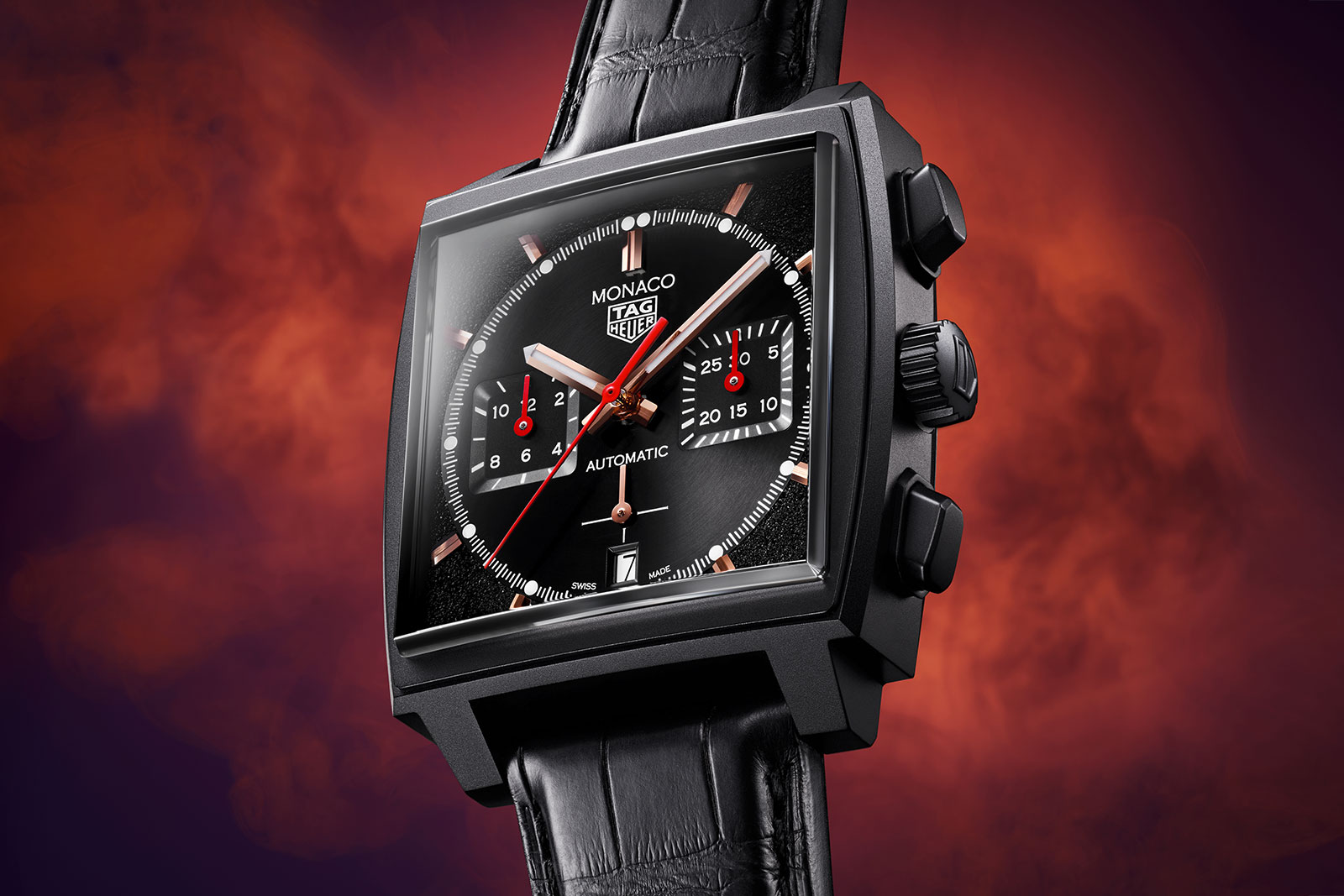 On the opening day of the 2022 Monaco Grand Prix, TAG Heuer takes the covers off the Heuer Monaco Special Edition, which takes its cues from the Monaco ref. 74033N, the all-black model from the 1970s nicknamed the “Dark Lord”. While it might look like a reissue at a glance, the new Monaco ticks all the right boxes in terms of vintage-inspired design without being a remake.

While TAG Heuer frequently turned to vintage remakes in recent years, the brand has now pivoted towards contemporary designs and concepts, a move exemplified by the Carbon Monaco and Carrera Plasma. The new Monaco Special Edition continues that – but at an affordable price point. 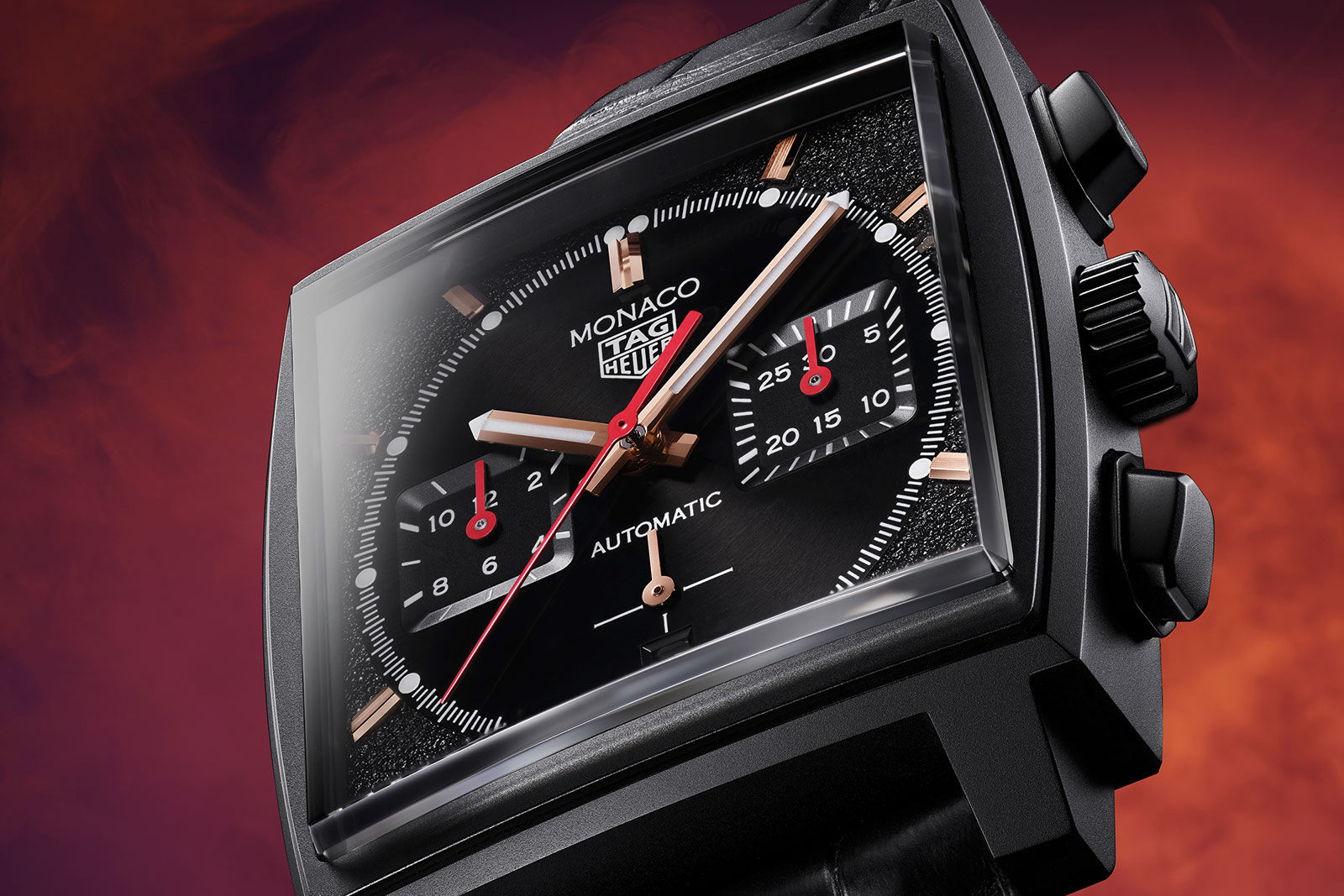 The original “Dark Lord” is an attractive watch – the all-black look goes well with the square case and 1970s feel – and so the new Monaco is as well. But the new model is appealing because it is not a one-for-one remake, which would have been an easy to pull off but less interesting.

The special edition manages to channel the feel of the vintage original by using rose gold accents on the dial, along with the textured outer section that brings to mind vintage synthetic leather straps.

But it is entirely modern in materials and mechanics. The case is coated titanium, while the movement is the in-house Heuer 02. And this costs only US$300 more than a Monaco powered by an ETA movement, making it an easy choice for anyone who likes the model. 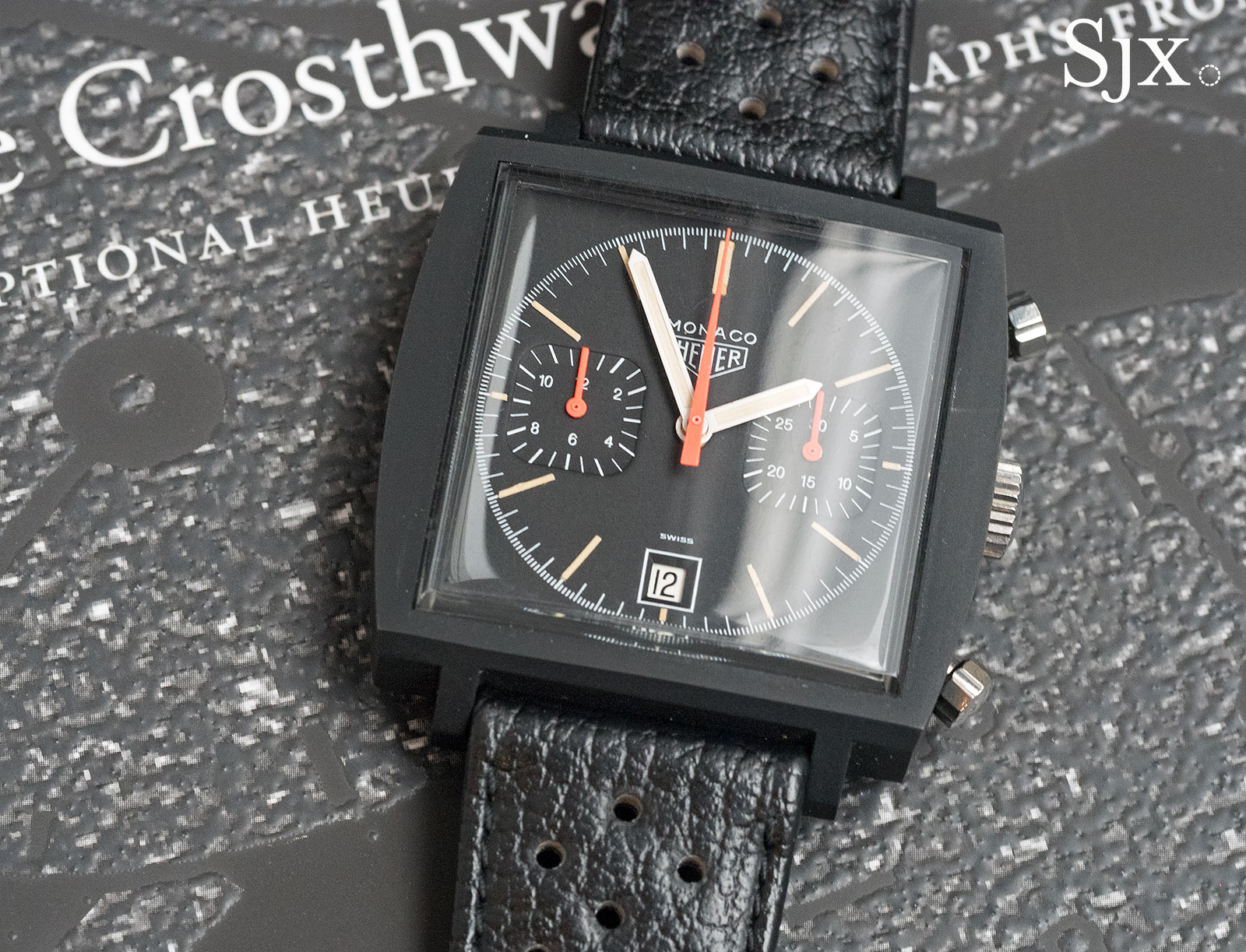 Once the most valuable vintage Heuer chronograph, the Monaco “Dark Lord” serves as inspiration for the new launch, which has a smartly designed dial in colours that evoke the vintage Monaco without being explicitly vintage elements. Most obvious are the rose gold-plated hands and indices that recall the aged tritium on the vintage original.

The dial is made up of two parts: a concentrically-brushed centre along with an unusually textured outer section that’s been stamped to give it a granular surface inspired by tyres and asphalt. 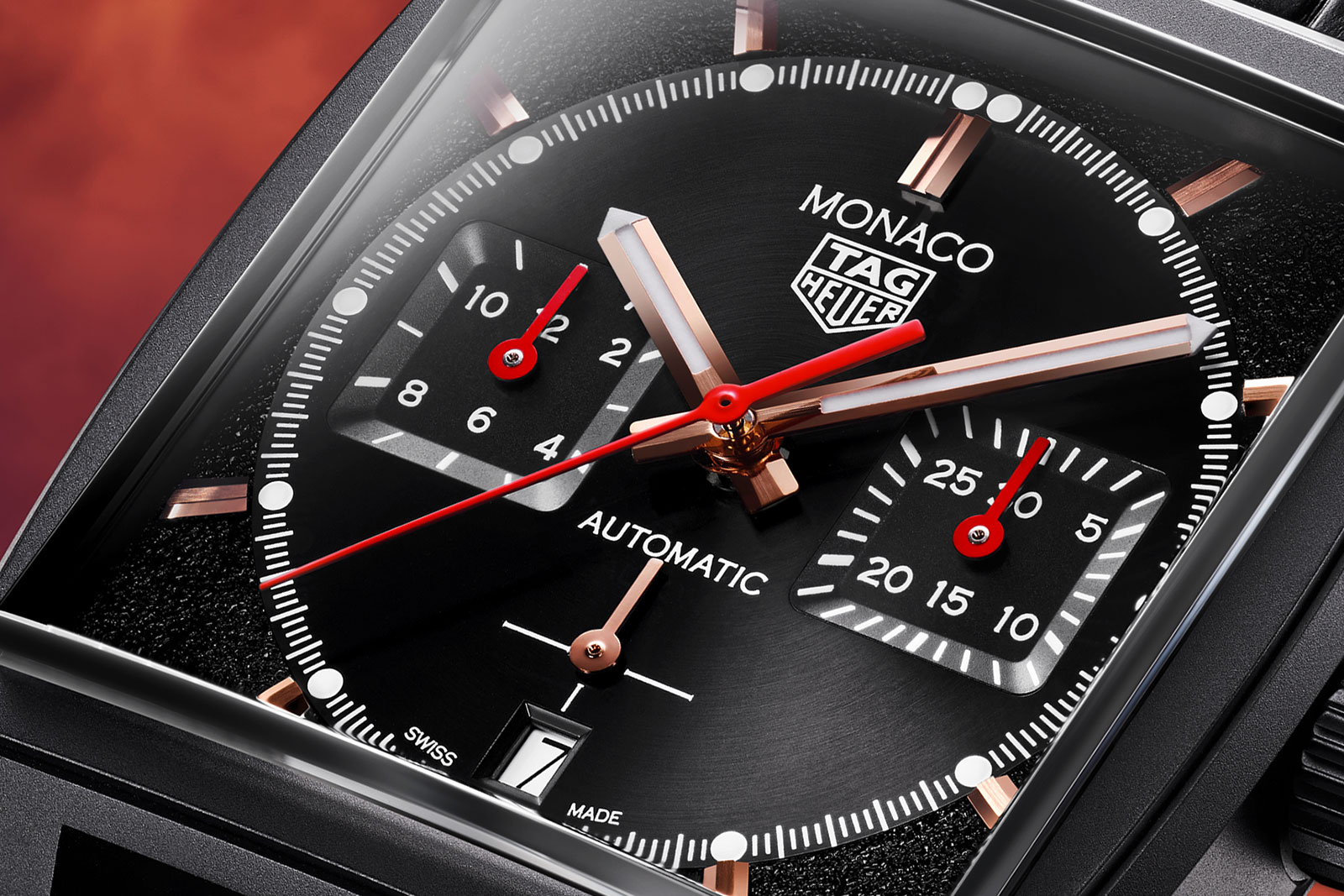 The case is traditional Monaco in both style and dimensions, measuring 39 mm by 39 mm with the angular, flat surfaces that define the model.

Finished with a matte, blasted finish, the case is titanium that’s been coated with diamond-like carbon (DLC), a hard-wearing coating that gives it a muted finish with only the slightest tiny of gloss. Though TAG Heuer has utilised DLC-coated titanium for other models, it’s been applied for the first time to the Monaco.

Unlike the classical Monaco, however, this has the crown at the conventional, three o’clock position as a result of the in-house movement within. 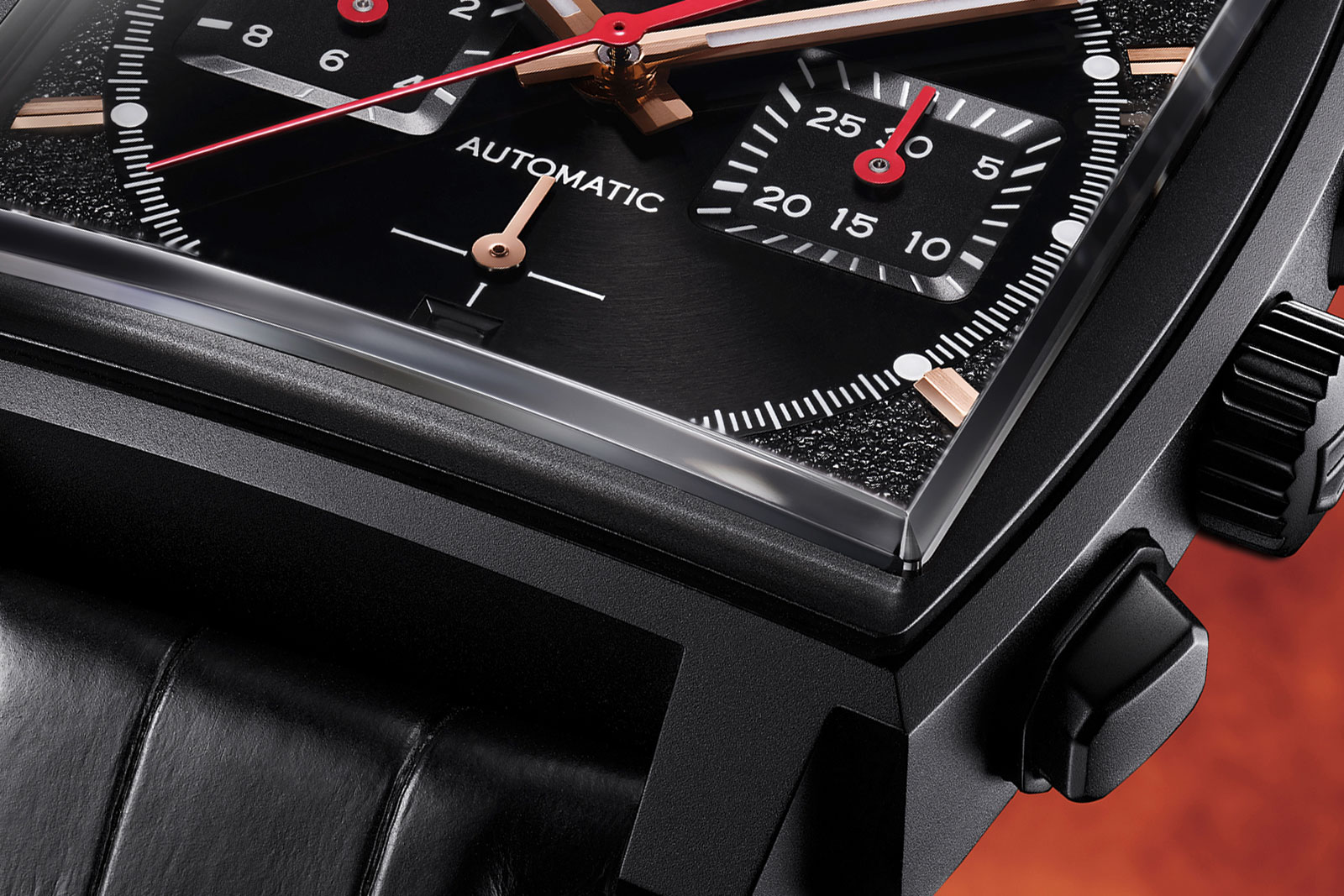 In contrast to the most recent iteration of the Monaco that also had a titanium case, this is equipped with the Calibre Heuer 02, an in-house calibre with an 80 hour power reserve. It’s a solid, industrial chronograph movement with a column wheel and vertical clutch. 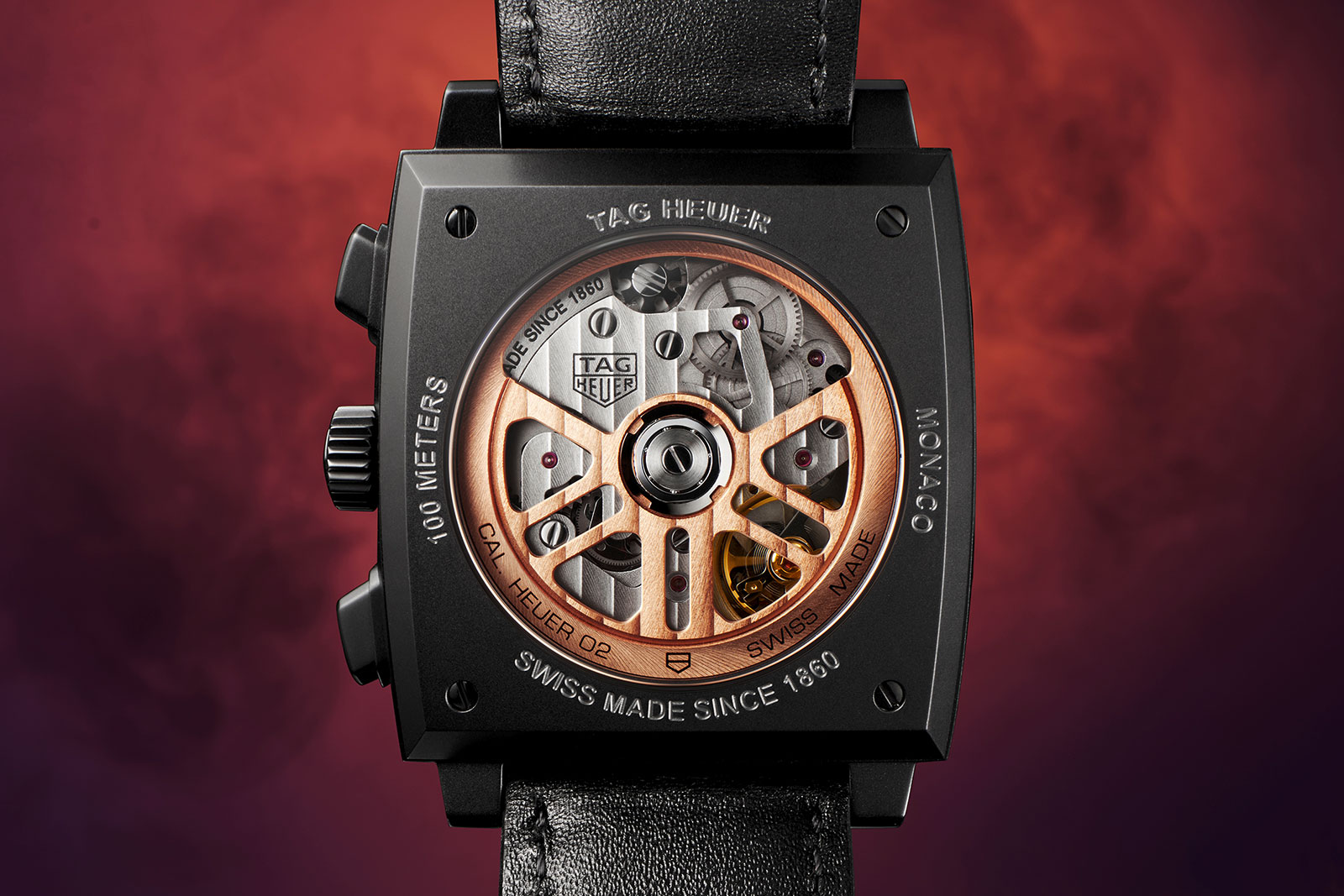 Limited edition: No
Availability: From May 2022 at TAG Heuer’s online shop and boutiques
Price: US$8,200

TAG Heuer Remakes the Most Expensive Vintage Heuer For Charity

The Ronnie Peterson Carrera will go under the hammer at Bonhams. 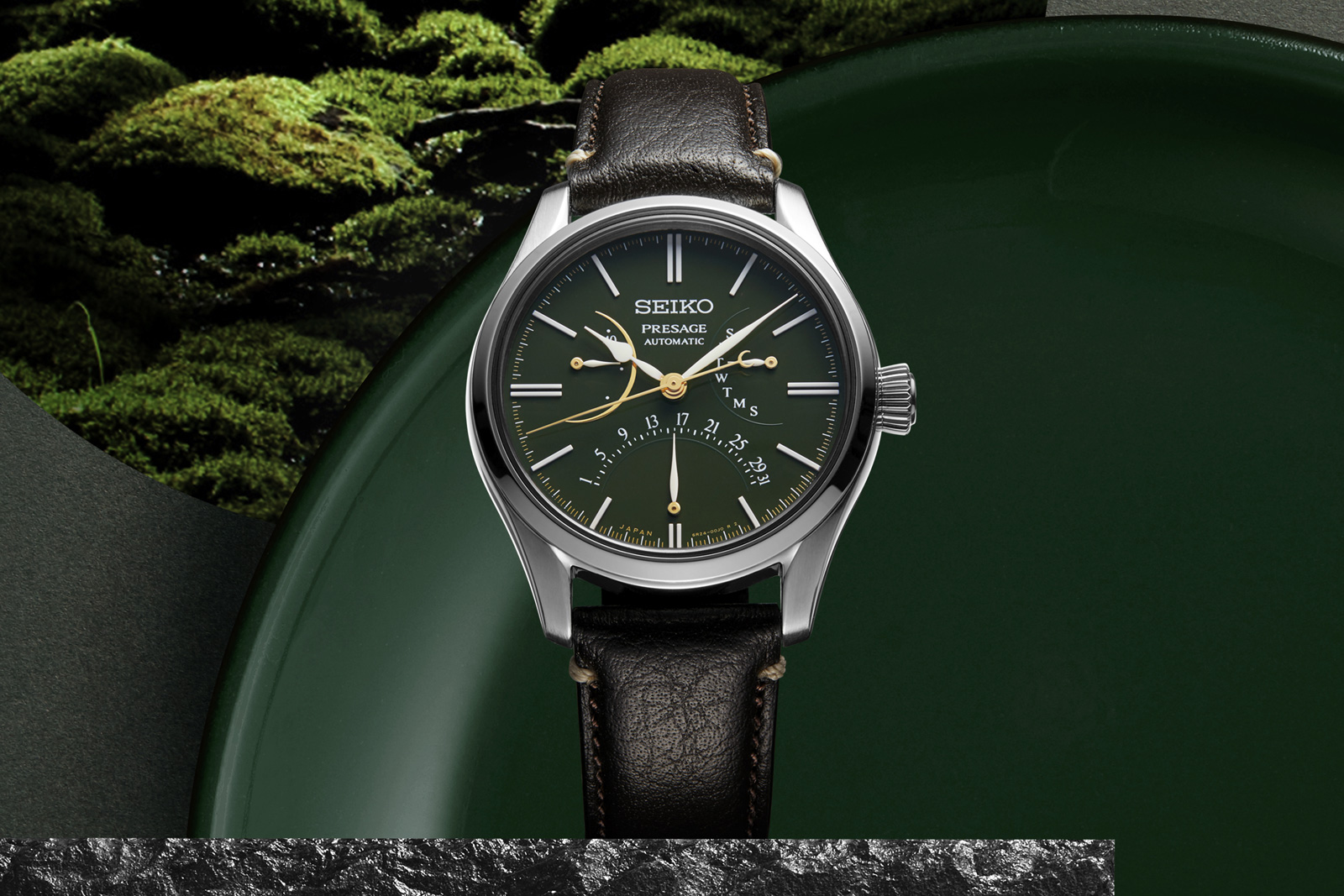 Though both the craft and complications aren’t novel, the SPB295J1 is unusual for its triple retrograde display in a symmetrical layout, which is combined with a dial in dark olive urushi with and gold-powder details. 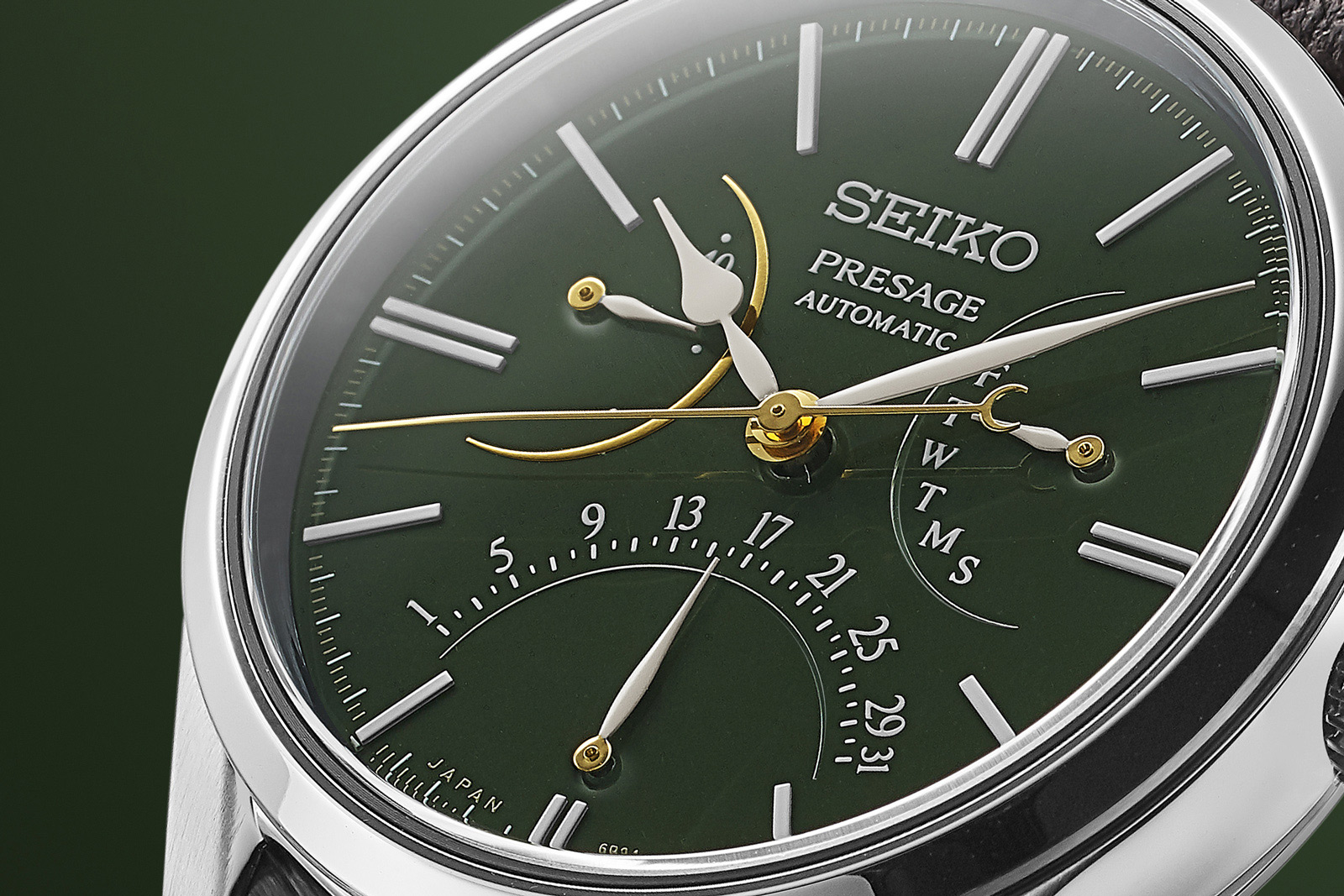 Like the recent pair of time-only watches with porcelain dials, the SPB295 is one of the more elegant watches in the Presage Craftsmanship line. I like the look of the SPB295 – the symmetry and uniformity make it more appealing than the standard Presage day-date watches that rely on a mix of fan-shaped and round sub-dials for the indicators.

Adding to the appeal of the balanced dial layout is the colour. While green is a faddish colour now, it is executed with subtle style here; it’s an understated, dark hue that Seiko accurately describes as evoking a moss garden. And the sprinkle of gold is a nice touch – and a typical feature of traditional Japanese lacquerware – without which the dial the dial might have looked plain.

My only gripe is the unusually small “31” at the end of the date scale, as well as the fact that the date numerals are four days apart, making it difficult to read the dates in between. 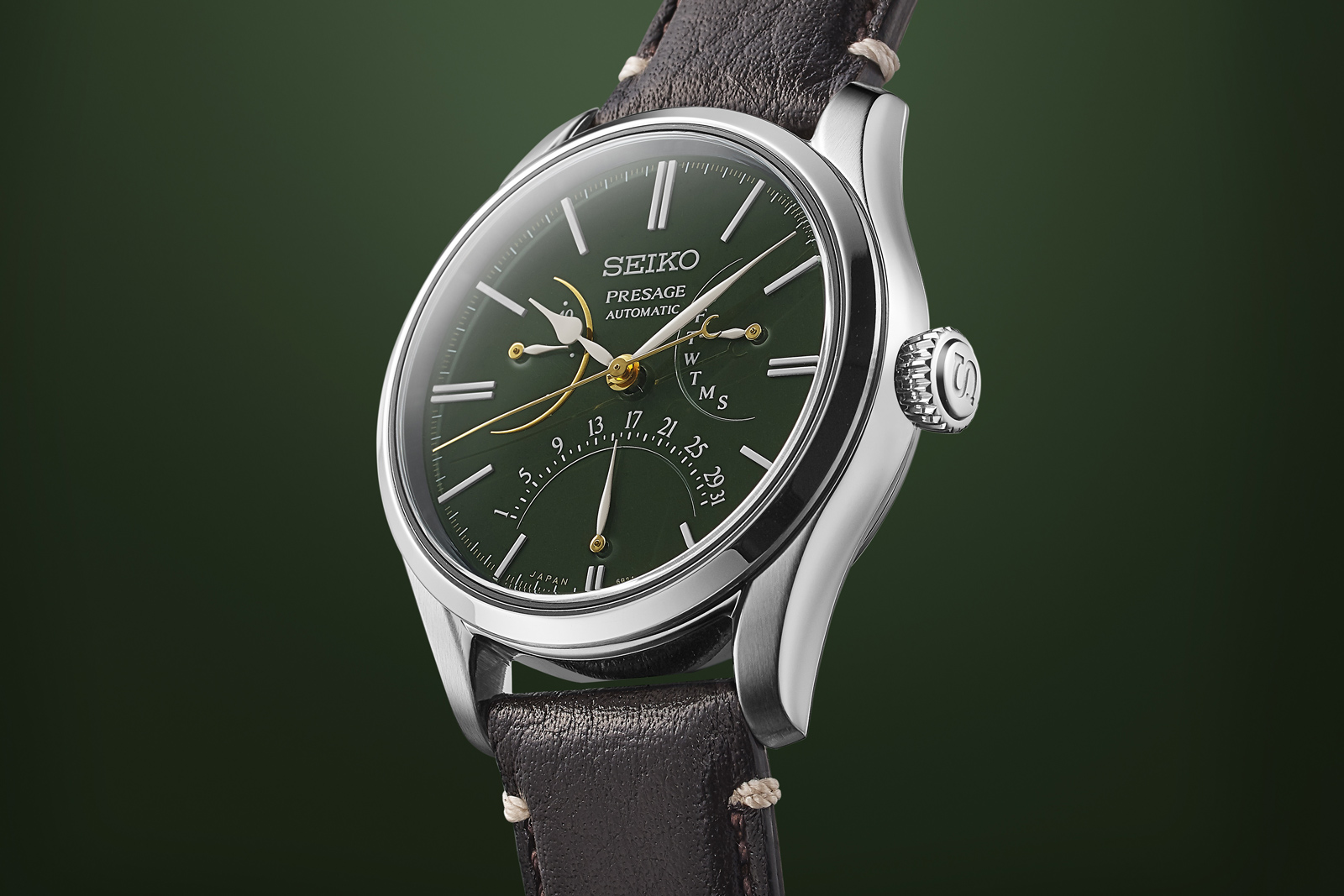 Beyond the colour, the watch stands out for the dial layout. Unlike most Seiko Presage day-date watches, the SPB295 features fan-shaped scales for all its displays, resulting in a dial that’s symmetrical. In fact, the triple-fan dial is uncommon at this price point and brings to mind far more expensive watches such as the Vacheron Constantin Patrimony Retrograde Day Date.

As is usual for a Presage, the watch big for what it is at 40.5 mm wide and 12.8 mm tall. But it is only marginally thicker than its time-only counterpart, so it is arguably more reasonably sized considering the triple retrograde displays that presumably add a little to the thickness of the movement.

Essentially a metal disc coated in lacquer, the urushi dial is made almost entirely by hand, a process that is made up of three different stages. The dial production process is overseen by Isshu Tamura, the master lacquer artist who is the third generation of his family to helm a workshop located in Kanazawa, a city historically famed for its lacquerware.

Starting out as a blank, the dial is first blasted to give it a rough surface that will hold the liquid lacquer. Several layers of urushi undercoat are applied and then fired in an oven, before being left to dry naturally for two weeks.

Then the intermediate coat of urushi is painted on, which once again requires drying. It’s followed by the top coat – where the drying process is once again repeated – that is then polished to a high gloss when dry. And finally it’s topped with a thin, clear layer of urushi that serves as a protective varnish. 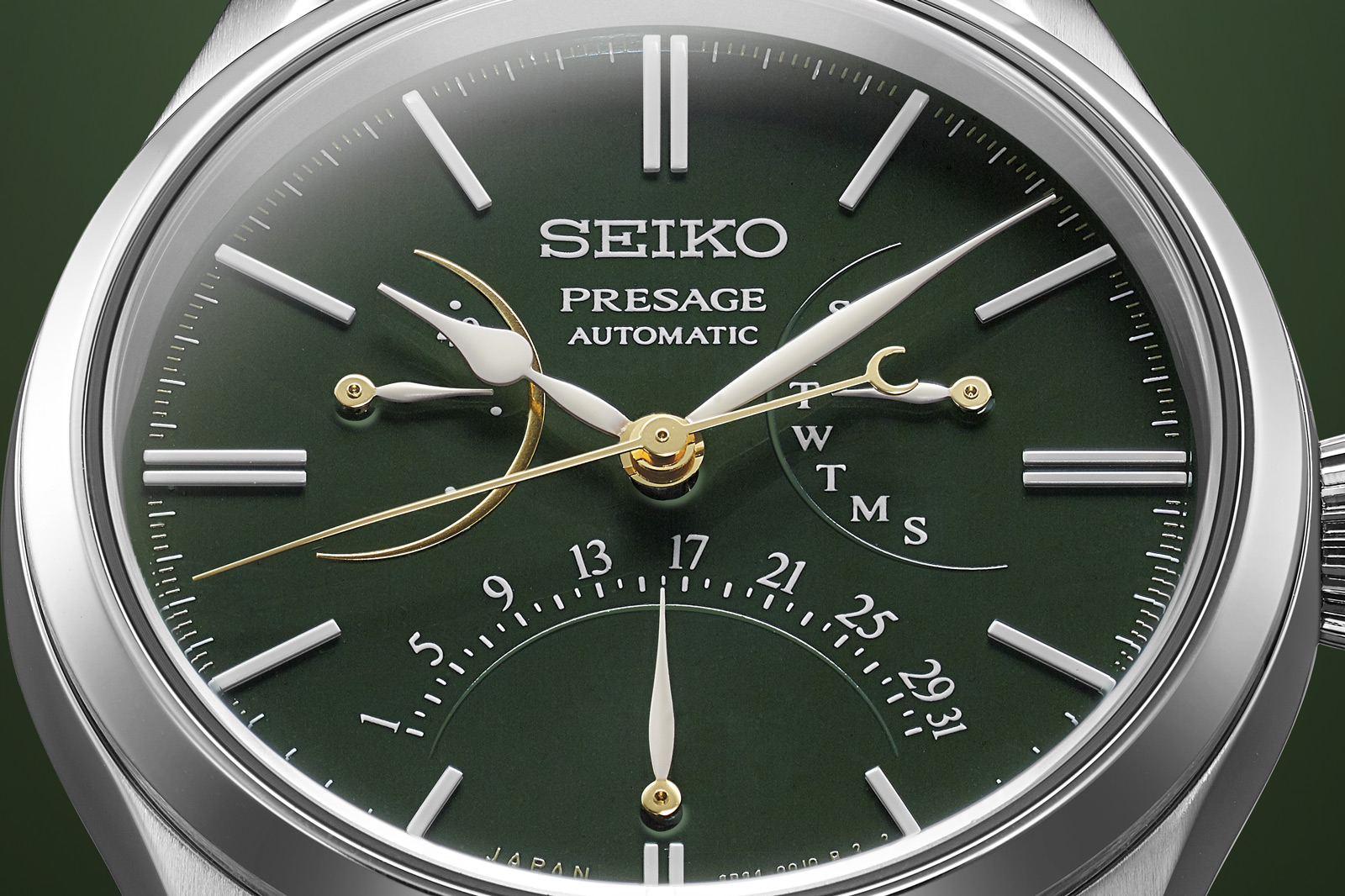 Powering the watch is a little-known workhorse calibre that’s part of the 6R family, the cal. 6R24. The movement was introduced more than a decade ago, which means the triple retrograde display isn’t actually new. But because the movement was rarely used in the past, the dial layout remains novel. 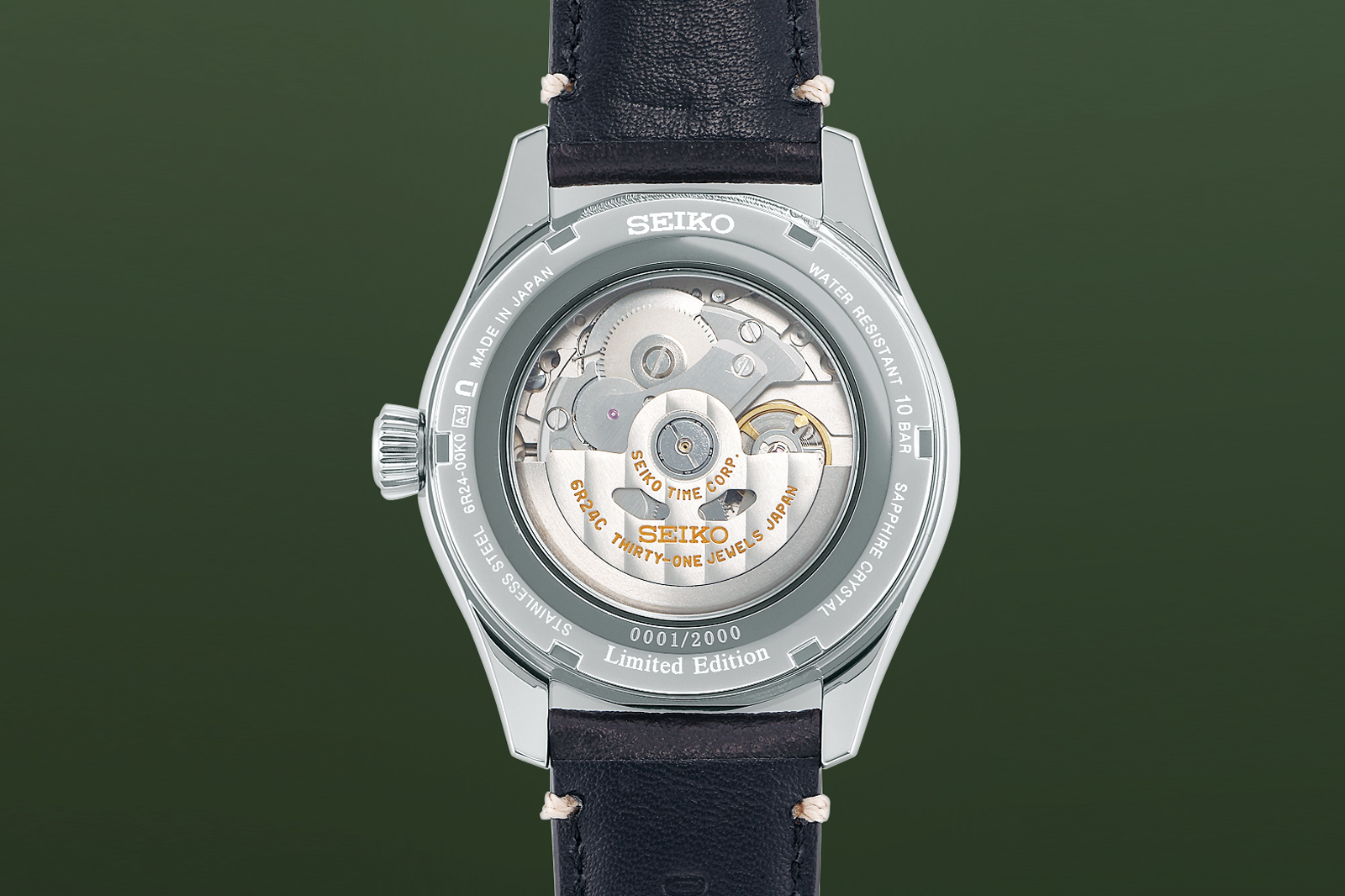