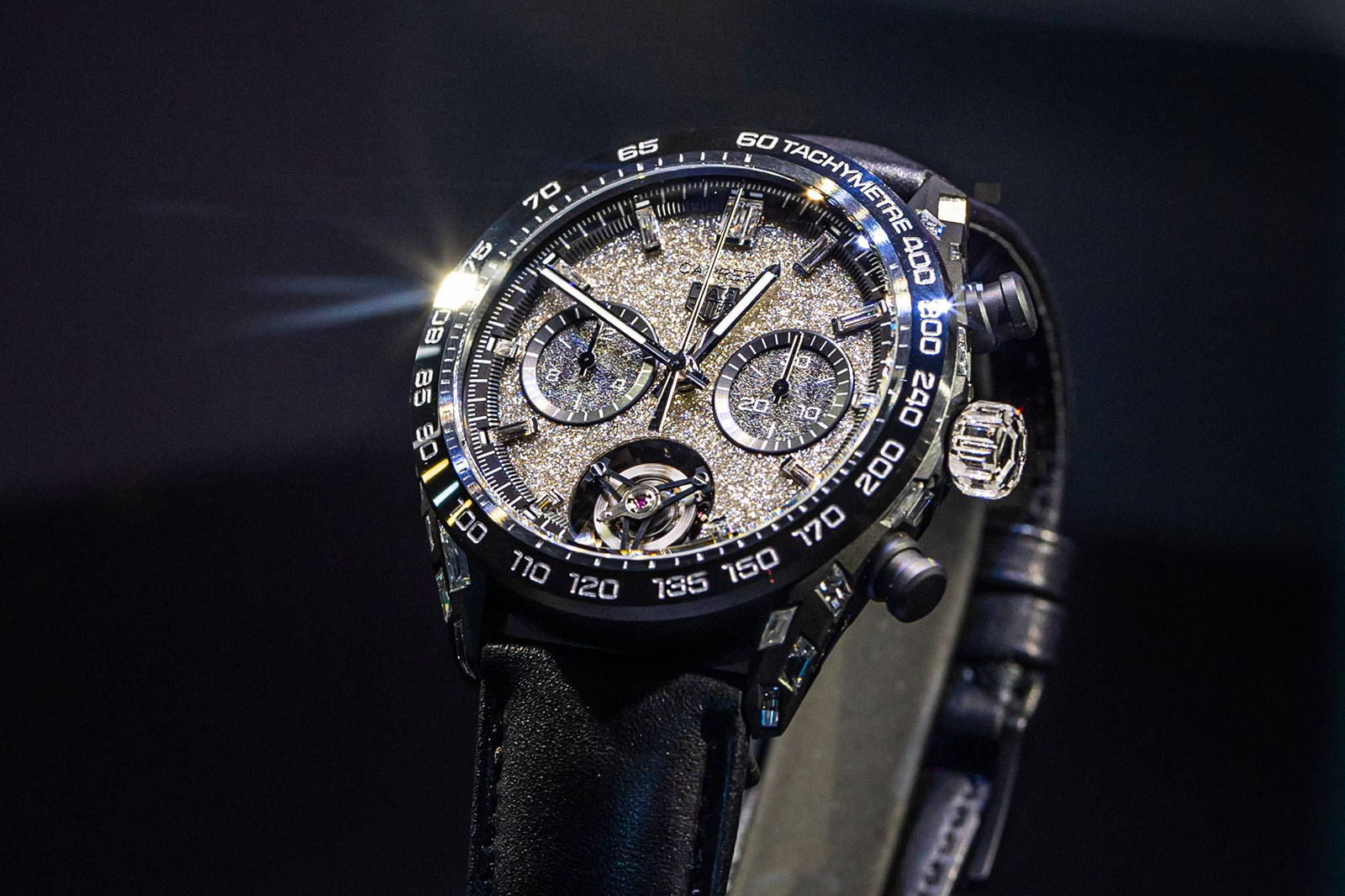 TAG Heuer is injecting advanced materials technology into what was the most affordable tourbillon-chronograph on the market, creating the Carrera Plasma Tourbillon Nanograph.

The new watch makes liberal use of carbon in all its forms, most notably with a carbon-composite hairspring along with a dial and crown made entirely of synthetic diamond, reflecting chief executive Frederic Arnault’s interest in technology and industrial processes. Priced at the equivalent of US$375,000, the Plasma is the first luxury mechanical watch to utilise artificial, or lab-grown, diamonds.

TAG Heuer has developed a suite of cutting-edge technology unusual a brands in its price range, though the brand’s most significant innovation, the carbon-composite hairspring, has never really gotten the recognition it deserves. While extremely expensive and slated to be produced in tiny numbers – just a handful a year according to Mr Arnault – the Plasma will certain broadcast TAG Heuer’s accomplishments in innovation, as well as that of its in synthetic diamond suppliers. 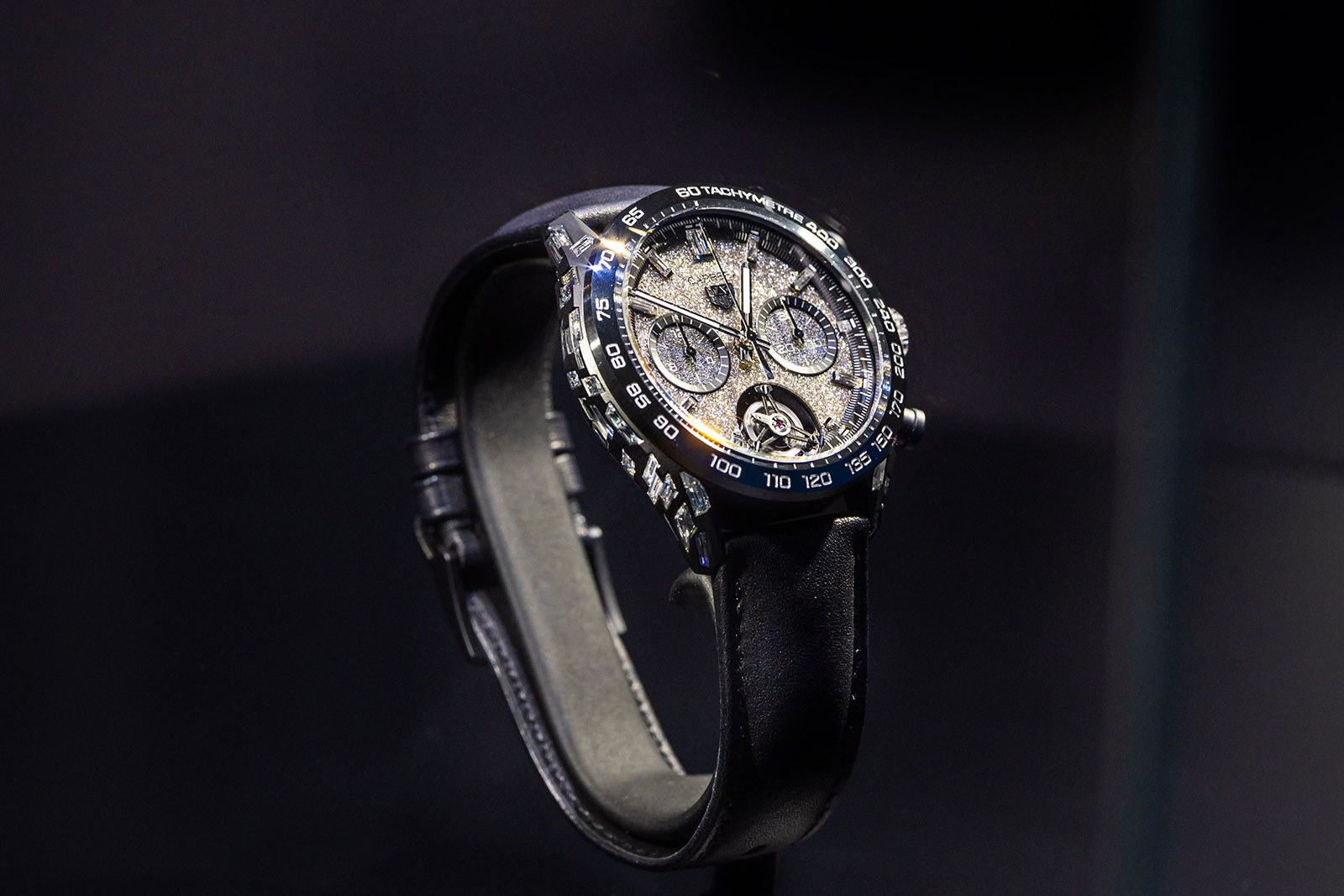 While lab-grown diamonds aren’t new, they have never before been used in high-end watch. As befits their unconventional status, the synthetic diamonds have been set in an abstract manner on the case, as opposed to typical gem setting. Combined with the synthetic diamond dial and crown, the result is a watch that is weird yet compelling.

But more important than the decorative use of synthetic diamond is the other form of carbon in the watch. Both the hairspring and tourbillon cage are carbon composite, a material that is highly conducive for good timekeeping. The carbon hairspring is light, strong, and non-magnetic, while the carbon cage is similarly featherweight. Together they enhance the efficiency of the movement by reducing the energy needed to move the tourbillon. 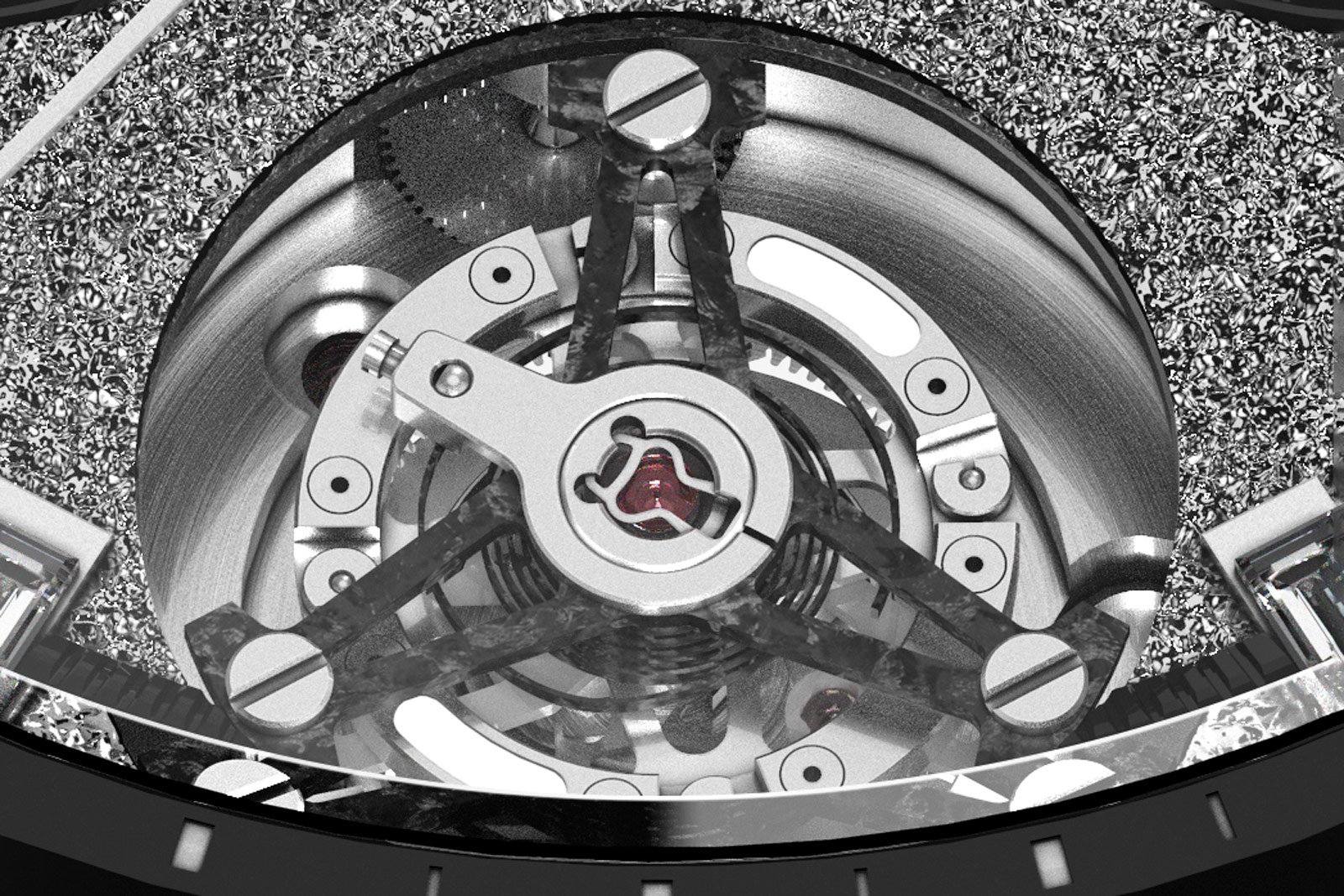 A product that took off in the mid-20th century, synthetic diamonds have long been used for industrial applications like diamond-tipped cutting tools or abrasive agents. And they have also been used in affordable jewellery, but practically never in pricey jewellery or watches.

The world of high-end mechanical watchmaking is no stranger to lab-grown diamonds, though they have only been used for functional components in the past. In 2007 Ulysse Nardin debuted synthetic diamond coating for silicon escapement parts as a method of increasing hardness and wear resistance.

In contrast, the Plasma uses synthetic diamond for purely aesthetic purposes. It shrewdly capitalises on the versatility of synthetic diamond to form the dial as well as the geometric forms necessary for a perfect inlay on the case. 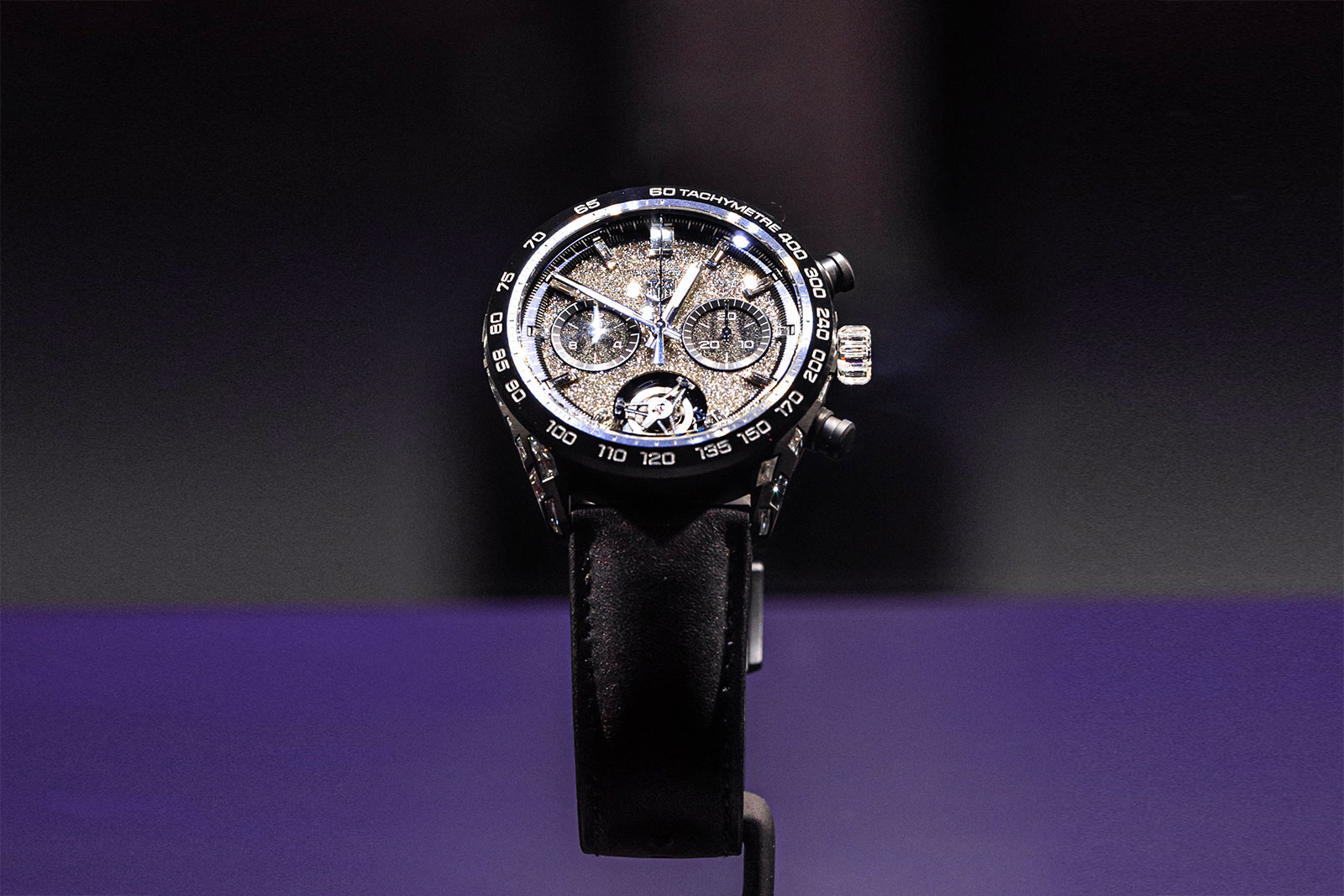 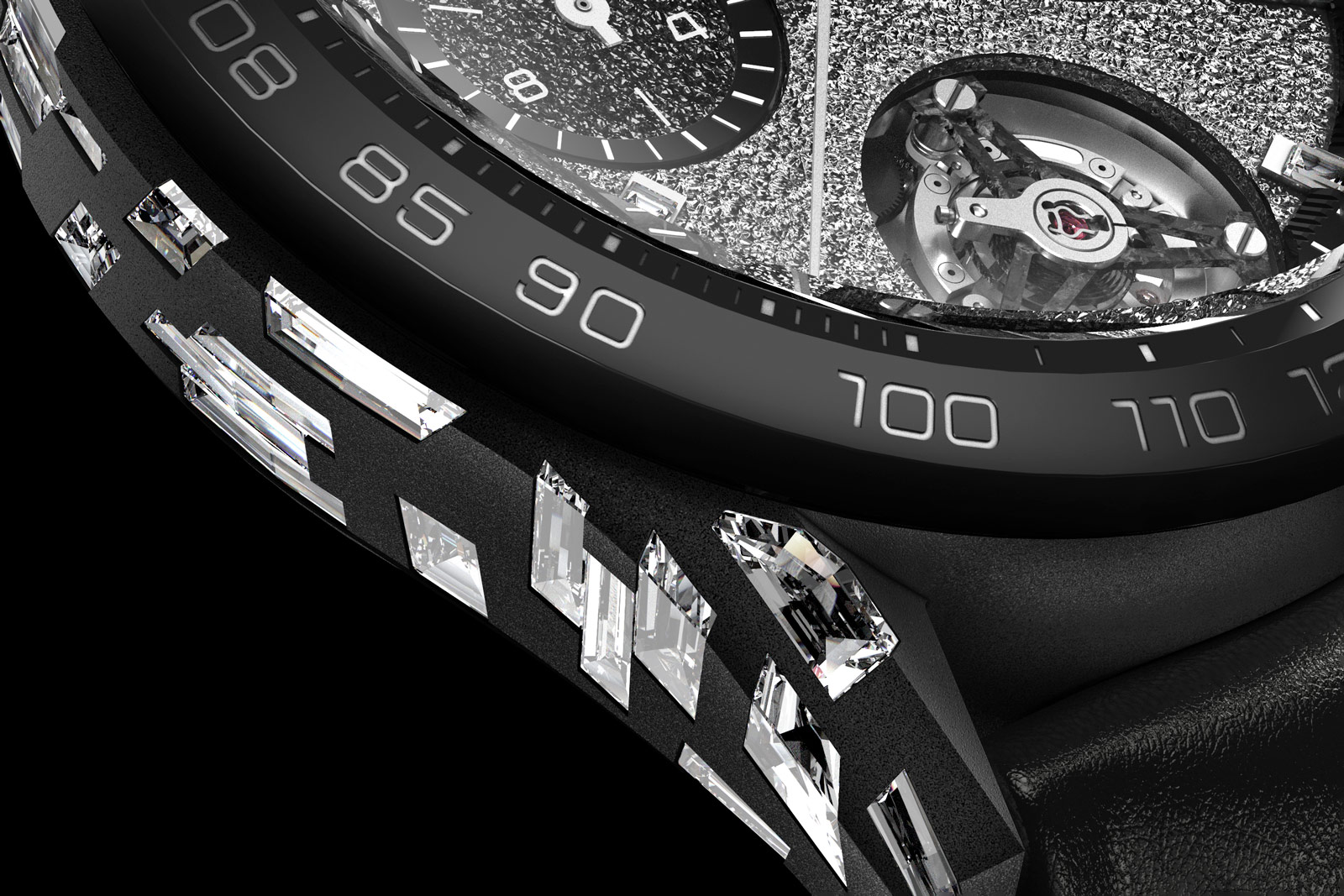 The case is anodised aluminium, while the bezel is black ceramic

In fact, the entire dial is made of diamond, including the chronograph registers. The counters are each made of a single piece of polycrystalline diamond attached to a brass base, the same construction used for the main dial. This represents a new approach to textured, reflective dials, which usually rely on galvanic treatment, PVD, or lacquer.

Also notable is the crown, which is a single, 2.5 carat diamond made by a Capsoul, a start-up specialises in synthetic diamond. The size of the crown, as well as the 48 largish diamonds on the case, perfectly illustrate the advantage of lab-grown diamonds. It would have been impossible to cut natural diamonds into the necessary shape. 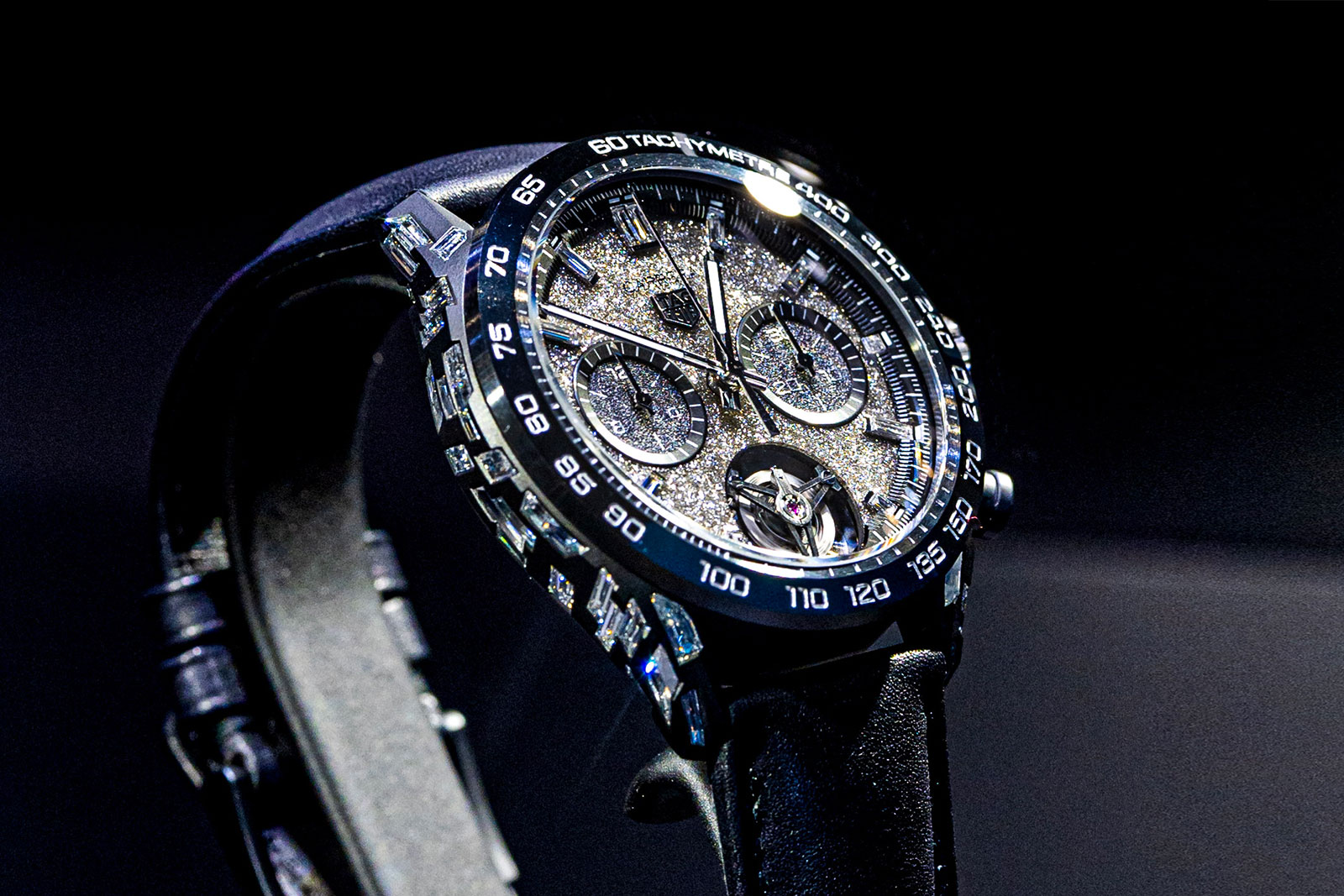 Mechanically, the movement is identical to the standard Heuer 02, save for the carbon-composite parts in the tourbillon and the decoration on the movement bridges.

TAG Heuer has used its carbon hairspring sparingly in the past – it hasn’t yet managed to produce the hairspring on a large scale – but the carbon tourbillon cage is a first for the brand (though not for the broader industry).

While less novel than the carbon hairspring, the carbon cage is nevertheless practical. It solves one of the biggest inherent problems of a tourbillon: the large amount of energy expended to rotate the cage, which can take a toll on timekeeping if not accounted for during the movement construction. 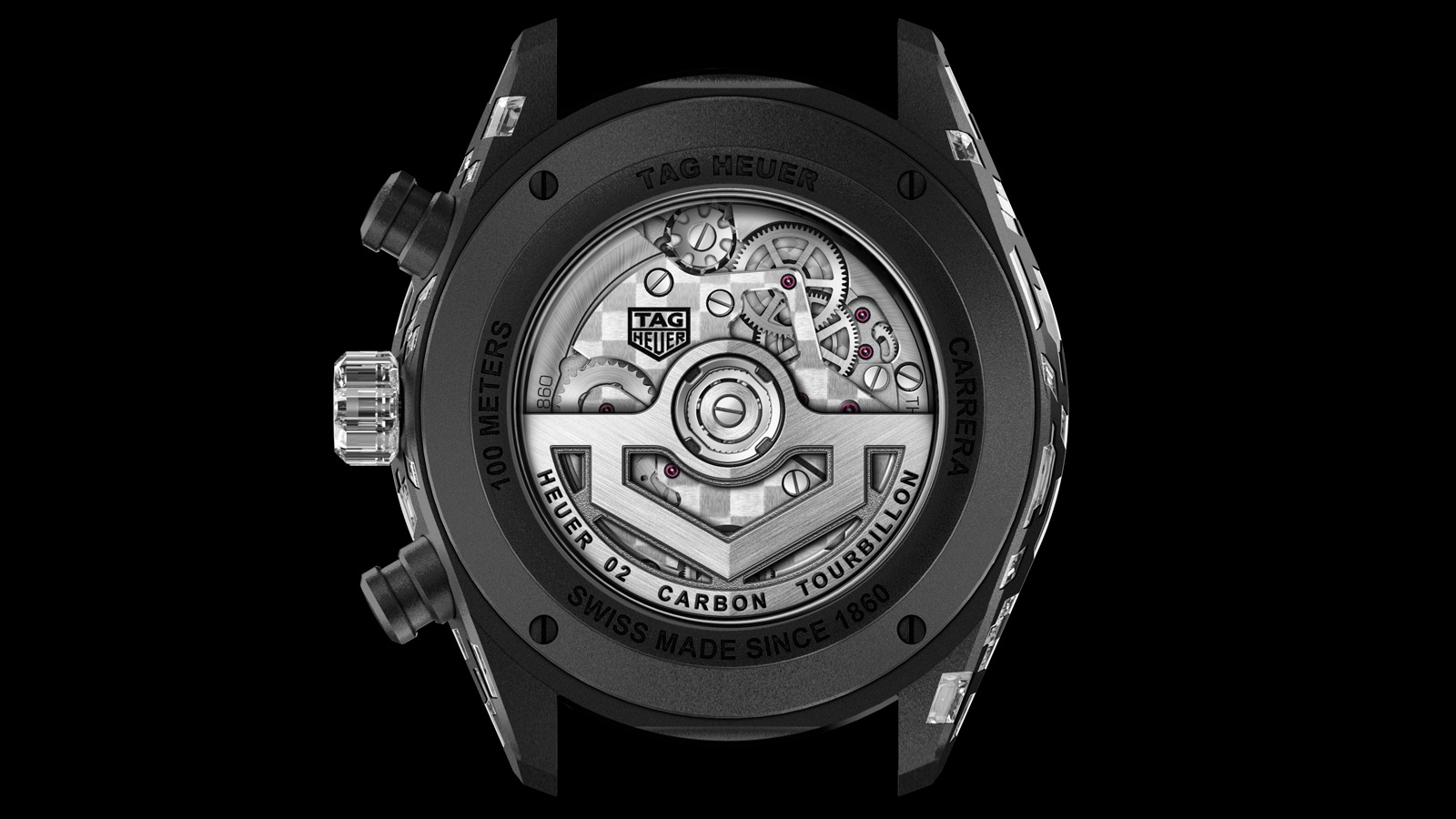 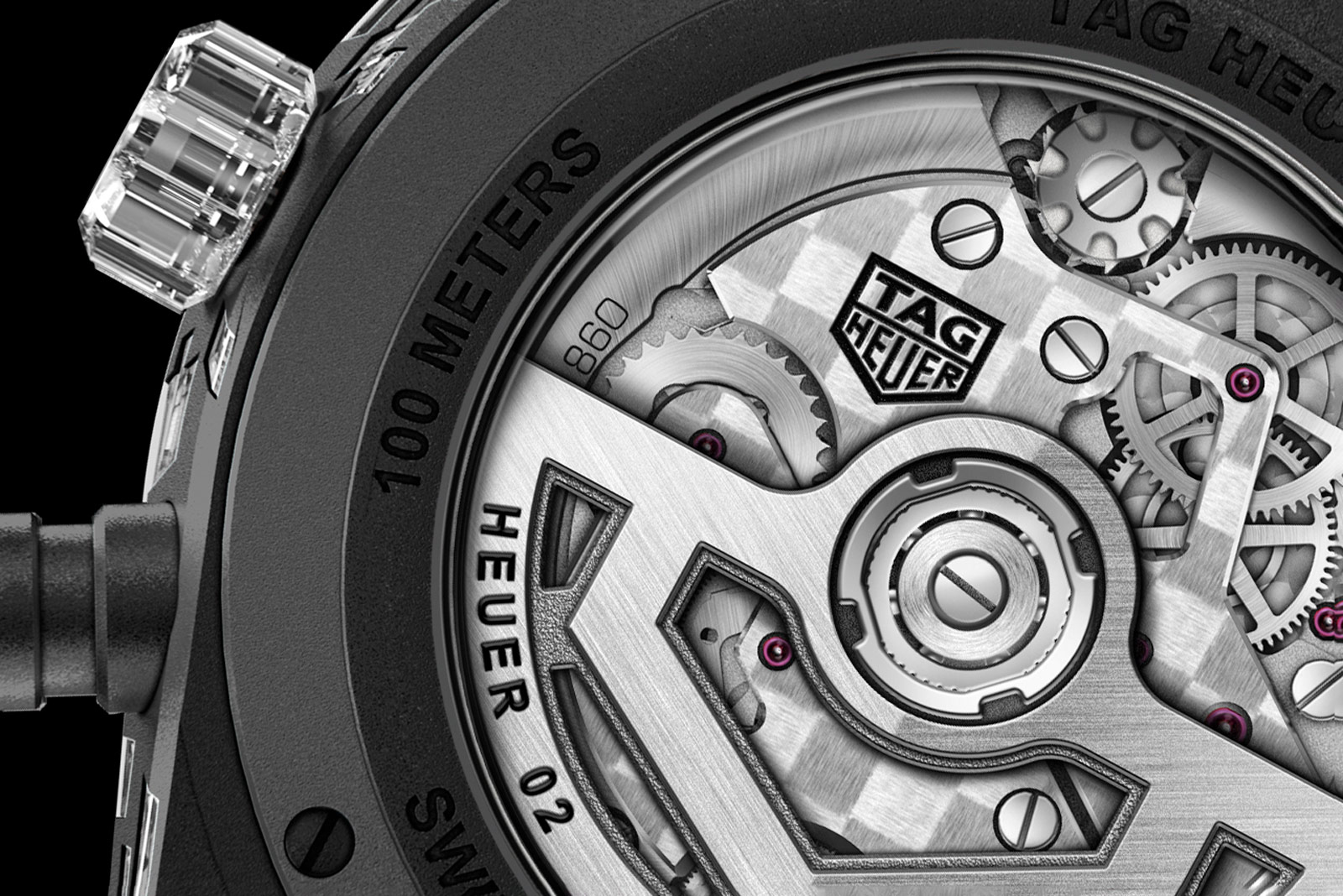