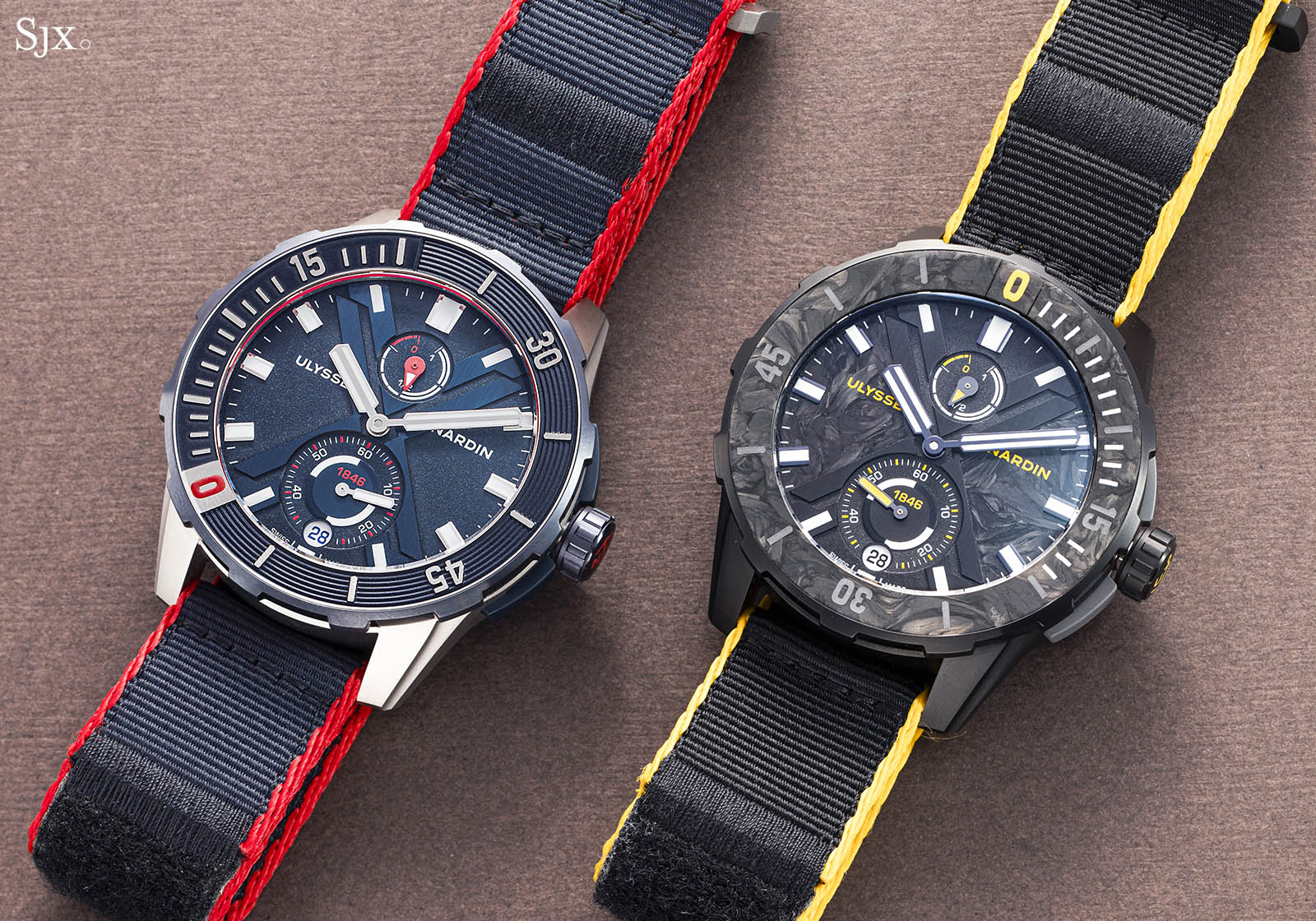 Dive watches priced below US$10,000 are one of the saturated and competitive segments in watchmaking. The category is dominated by two dive watch icons, the Rolex Submariner and the Omega Seamaster, both of which set the bar high with high-spec, in-house escapements equipped with high-tech hairsprings and next-level chronometer certifications.

Ulysse Nardin smartly steered away from the conventional dive-watch look with last year’s new Diver X. Created to mark the brand’s newly-forged partnership with Vendée Globe, a non-stop solo yacht race around the globe, the Diver X Cape Horn and Diver X Nemo Point are a contemporary take on the standard Diver Chronometer 44mm, dressed up in new materials and colours but retaining the same basic specs, namely a 300 m rating and an in-house movement with a proprietary escapement. 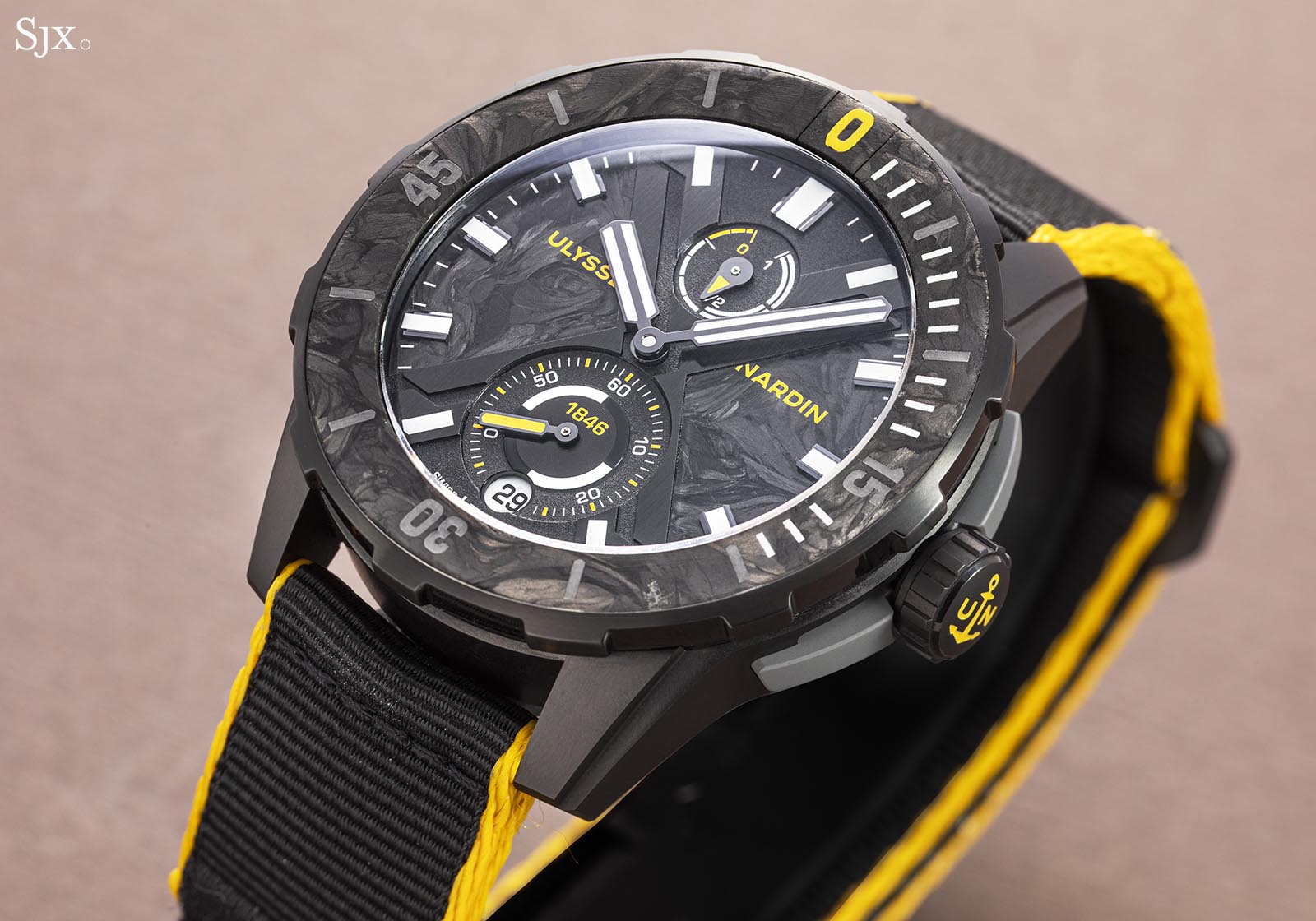 Dubbed the “Everest of the Seas” because of its reputation as the toughest sailing competition in the world, the Vendée Globe is such an arduous journey that the eight races since 1989 have claimed three lives. Competitors have to travel over 40,000 km, a round-the-world trip that takes between two to four months. Unsurprisingly, the twin Diver X editions are aggressively styled and technically robust.

Each named after key points along the Vendée Globe route, the Cape Horn and Nemo Point have the longstanding, symmetrical layout of a Ulysse Nardin diver’s watch – originally inspired by the dial of the brand’s 19th-century, gimballed marine chronometers – with a power reserve at 12 o’clock and a small seconds sub-dial at six with a neatly integrated date display. 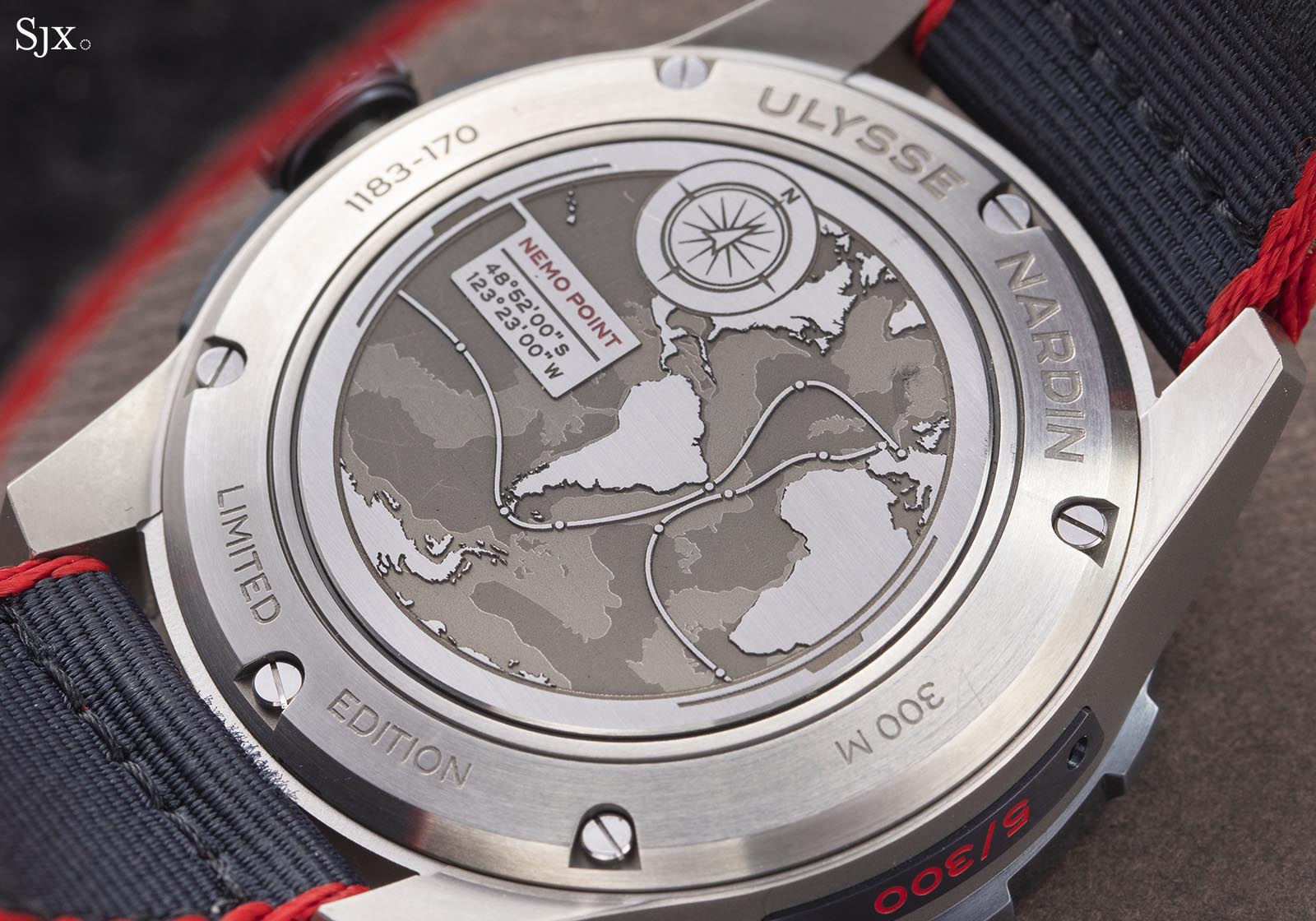 Both watches bear a large “X” stamped in relief on the dial, which is a bit of an affectation. It relates to the makeovers Ulysse Nardin has given its long-standing models, resulting in watches like the Freak X and Skeleton X.

While the concept is an affectation, the “X” works pretty well as a design element on a sports watch; it blends into the dial and doesn’t get in the way of legibility. 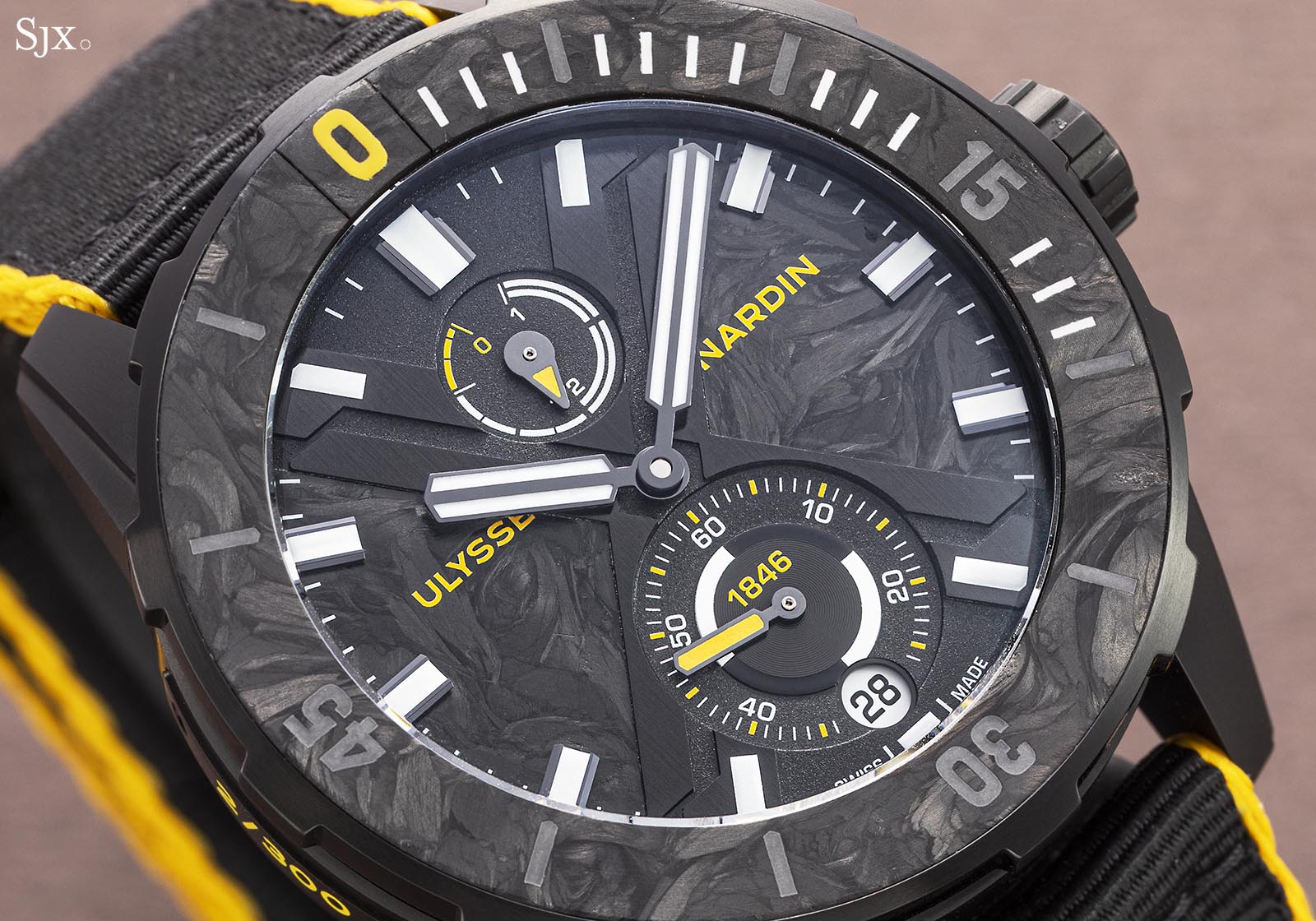 Depth rated to 300m, both watches measure 44 mm; they are largish but look and feel smaller, thanks in part to the short, stepped lugs. The size is also mitigated by the fact that the cases are lightweight titanium, making them extremely wearable despite their dimensions. 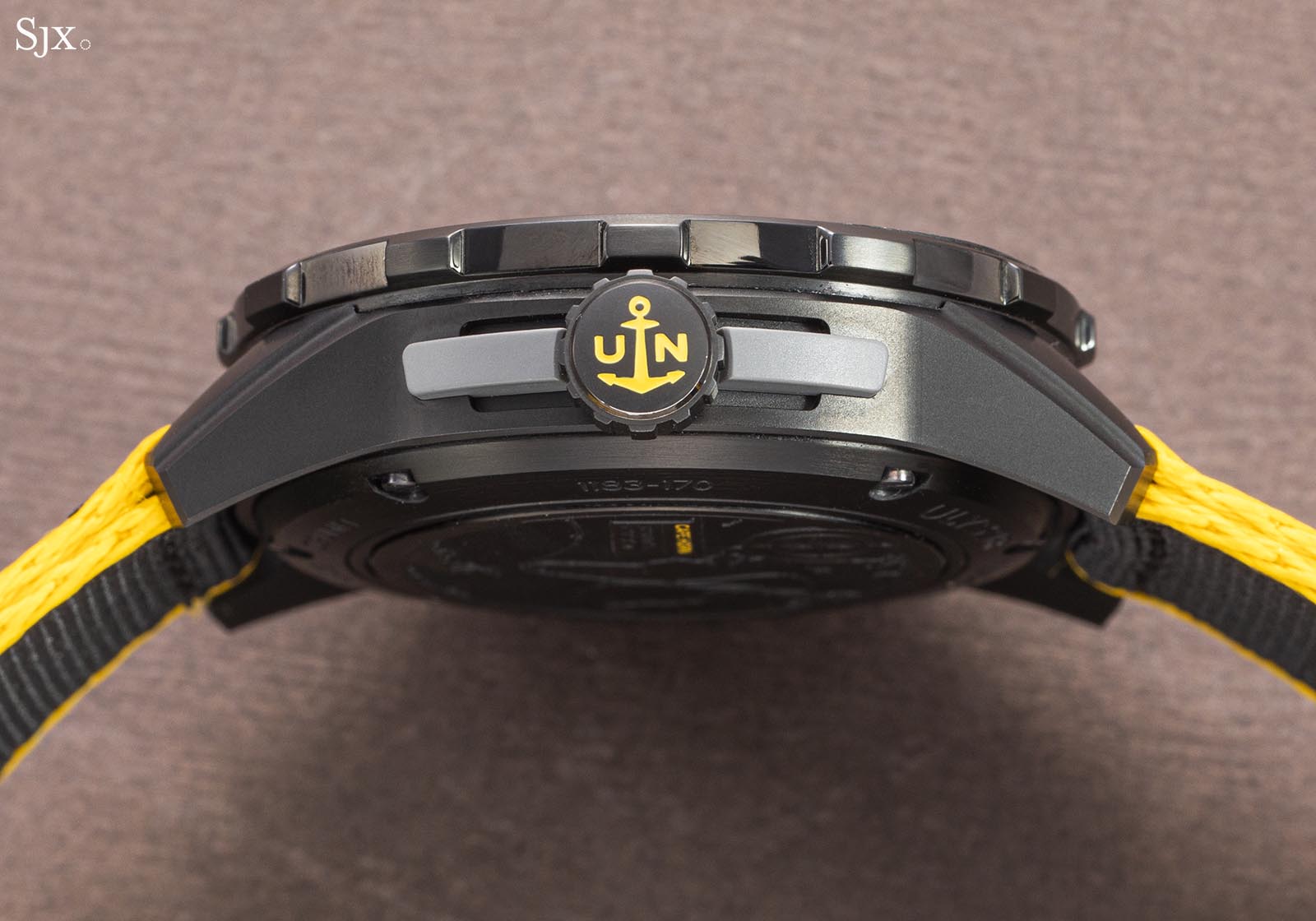 The case is generally simple, but finished neatly and precisely. One element it could do without are the rubber crown guards. They are functional, but the bits of rubber feel out of place on the case. 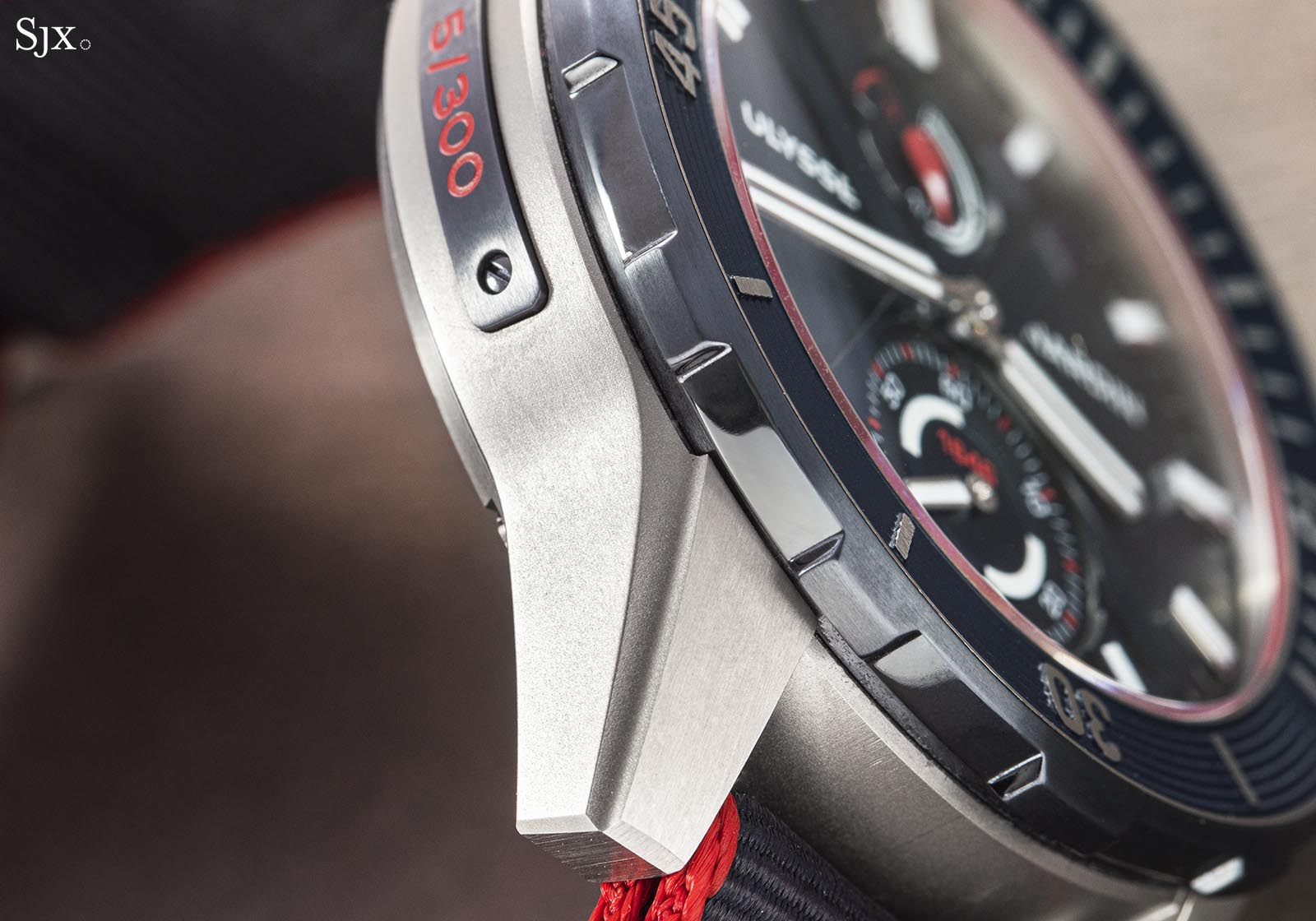 And in a first for Ulysse Nardin, both watches are fitted with fabric straps equipped with a velcro fastener – which is a perfect fit for the watch in style and function. 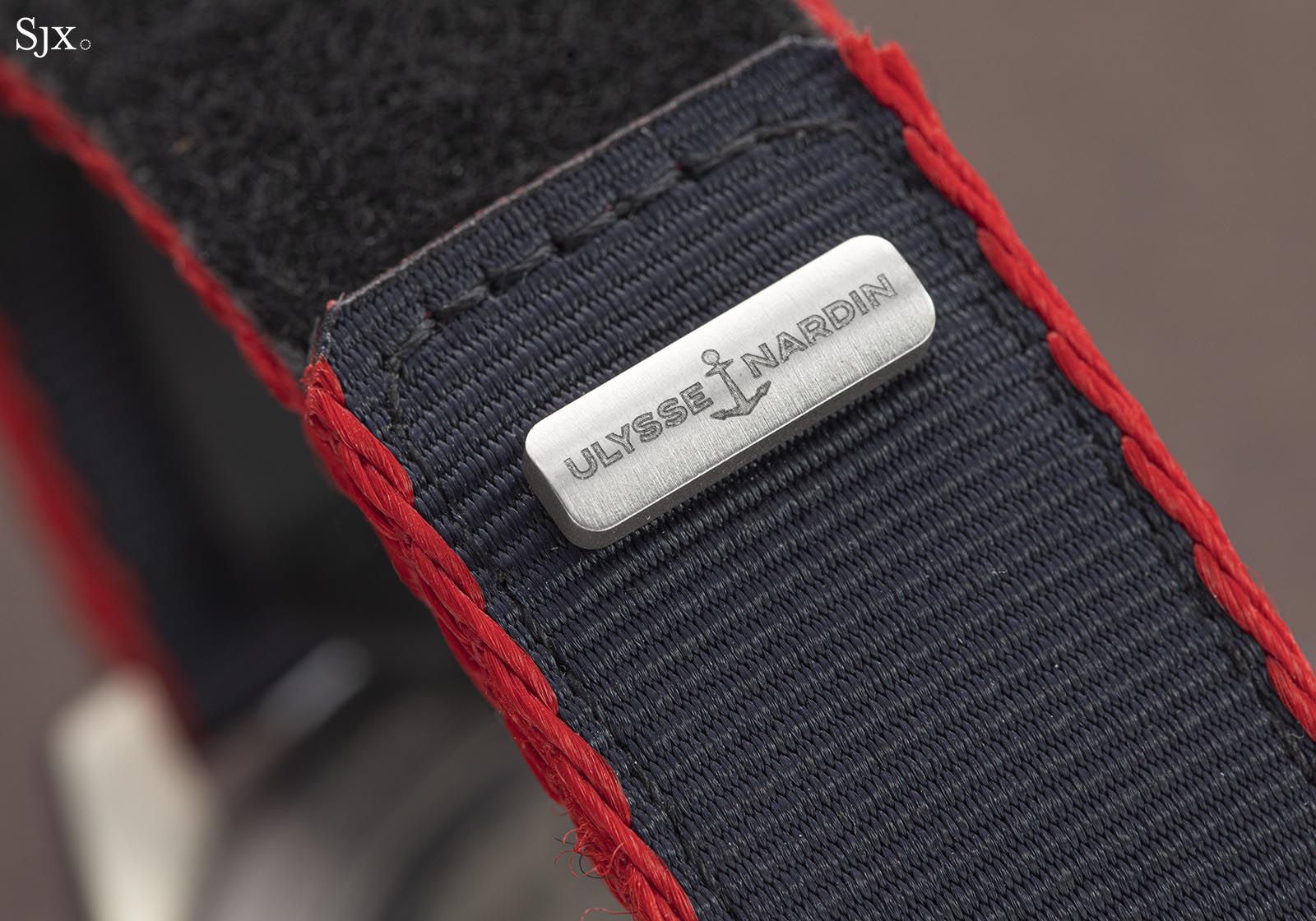 The fabric strap with a velcro fastener

However, the two are radically different in terms of materials, colours and finishing. Their contemporary aesthetics help differentiate them from the massive array of vintage remakes and no-nonsense, military-esque dive watches on the market, while retaining the function and purpose of a dive watch.

The Diver X Cape Horn is named after one of the most harrowing points of the Vendée Globe route. Located off the southern tip of South America, Cape Horn is often a mariner’s worst nightmare as its williwaws and ferocious waves make rounding it particularly challenging.

Rendered in black-coated titanium, the Diver X Cape Horn is also the official watch of the Vendée Globe 2020-2021. It features a striking bezel insert made of carbon composite that doesn’t add much in terms of function but it sure looks cool. 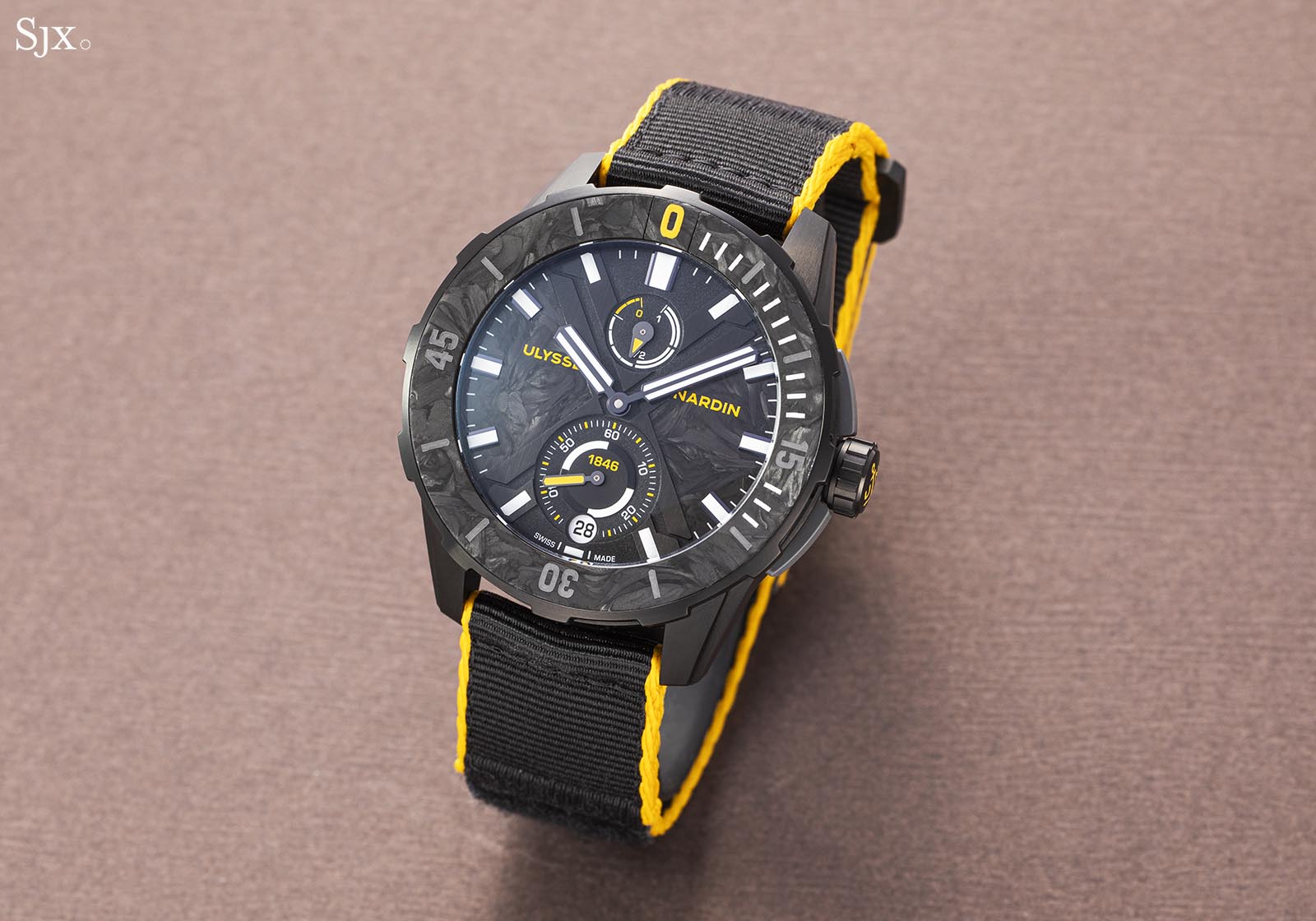 The dial is a mix of textures that give it visual interest. The recessed portions in the middle of the dial have a frosted finish, flanked by carbon inserts, while the relief surface is brushed.

Even though there’s quite a bit going on, almost everything is rendered in shades of black or grey, so none of it affects legibility, especially when combined with the large hands and markers. 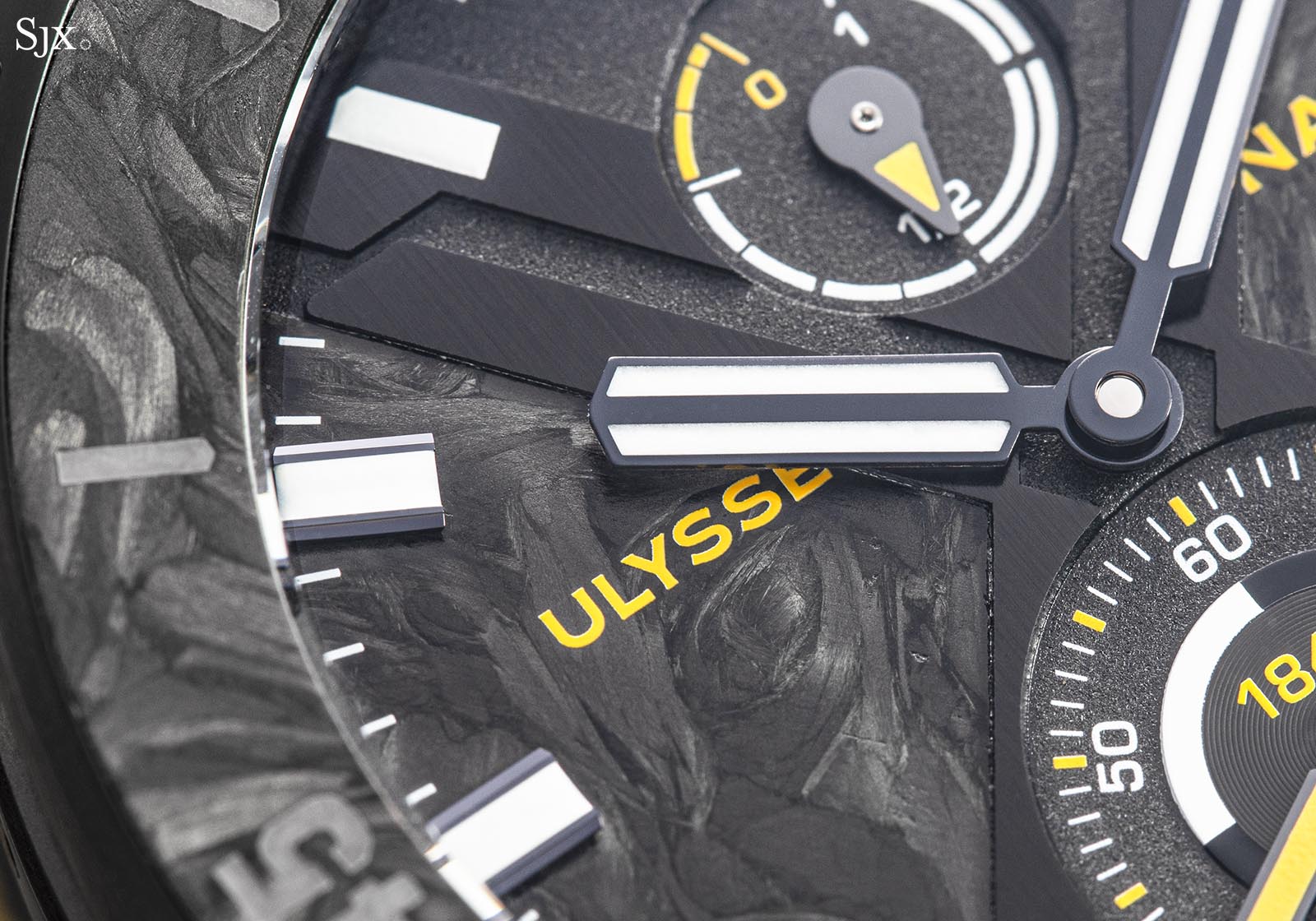 While the seconds hand is unimportant in a bottom timer, it serves as a crucial indicator that the watch is running underwater. Thus, it is relegated to a sub-dial at six o’clock and filled with yellow Super-Luminova. 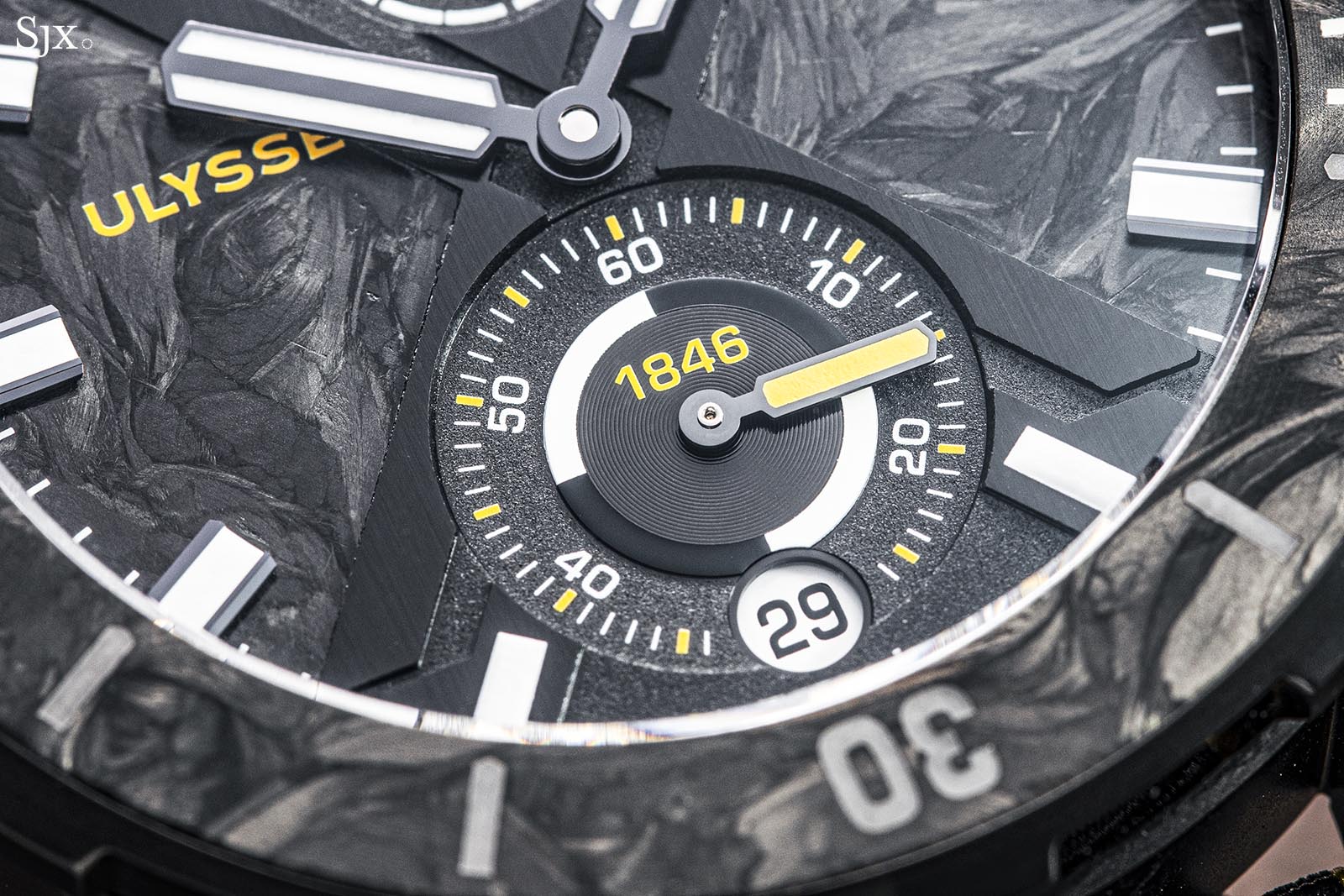 The small seconds sub-dial with a mix of textures

The Diver X Nemo Point gets its name from the most remote point on Earth; in fact, Nemo Point is the position that’s is closer to the International Space Station than any landmass. 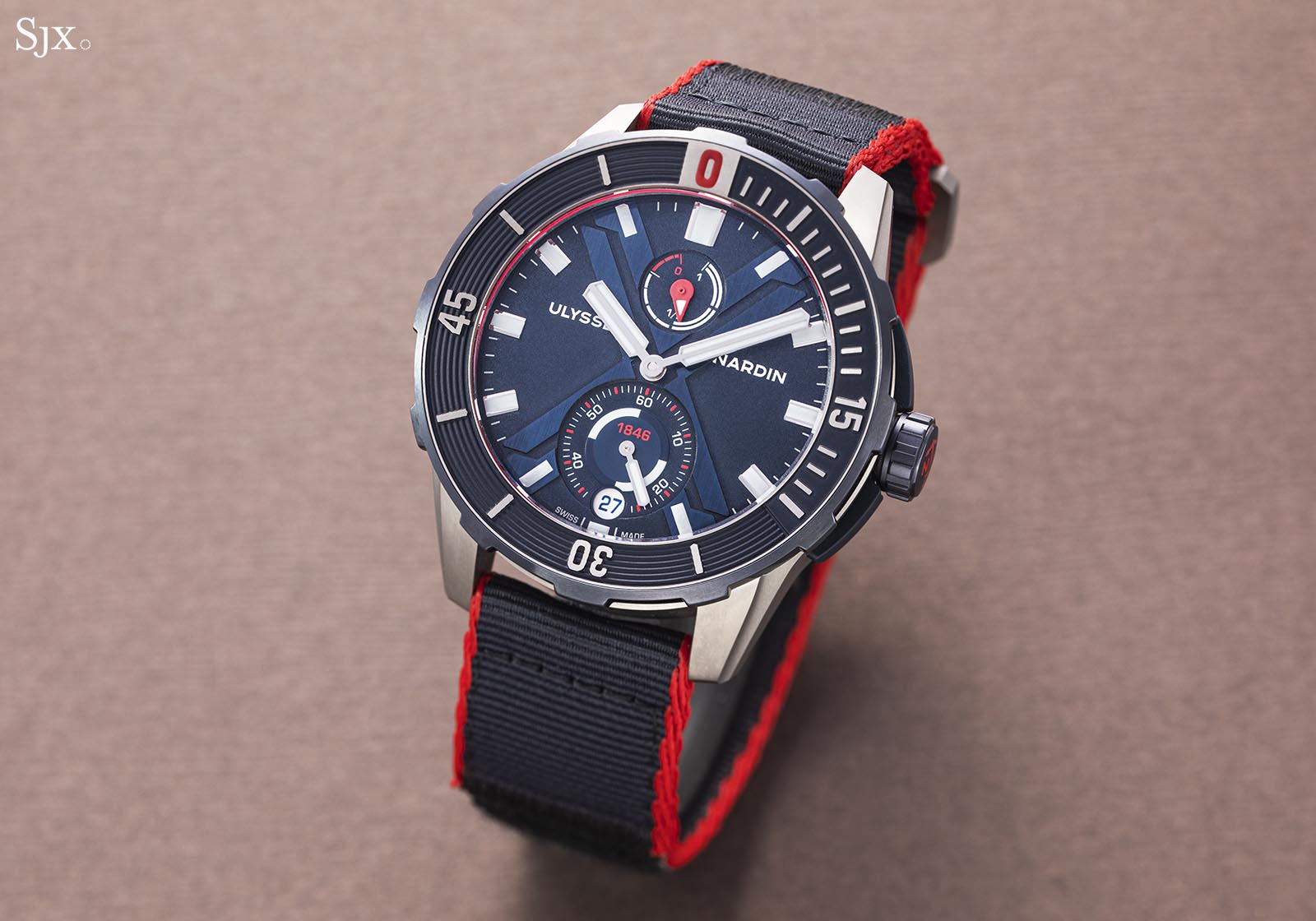 The watch has a natural-finish, brushed titanium case paired with a blue-coated titanium bezel that has a rubberised insert, giving it a more conventional dive-watch look.

However, because the rubber is inserted over a concave bezel with raised markers, the indications are bolder and much more pronounced as compared to the bezel markings on the Cape Horn. 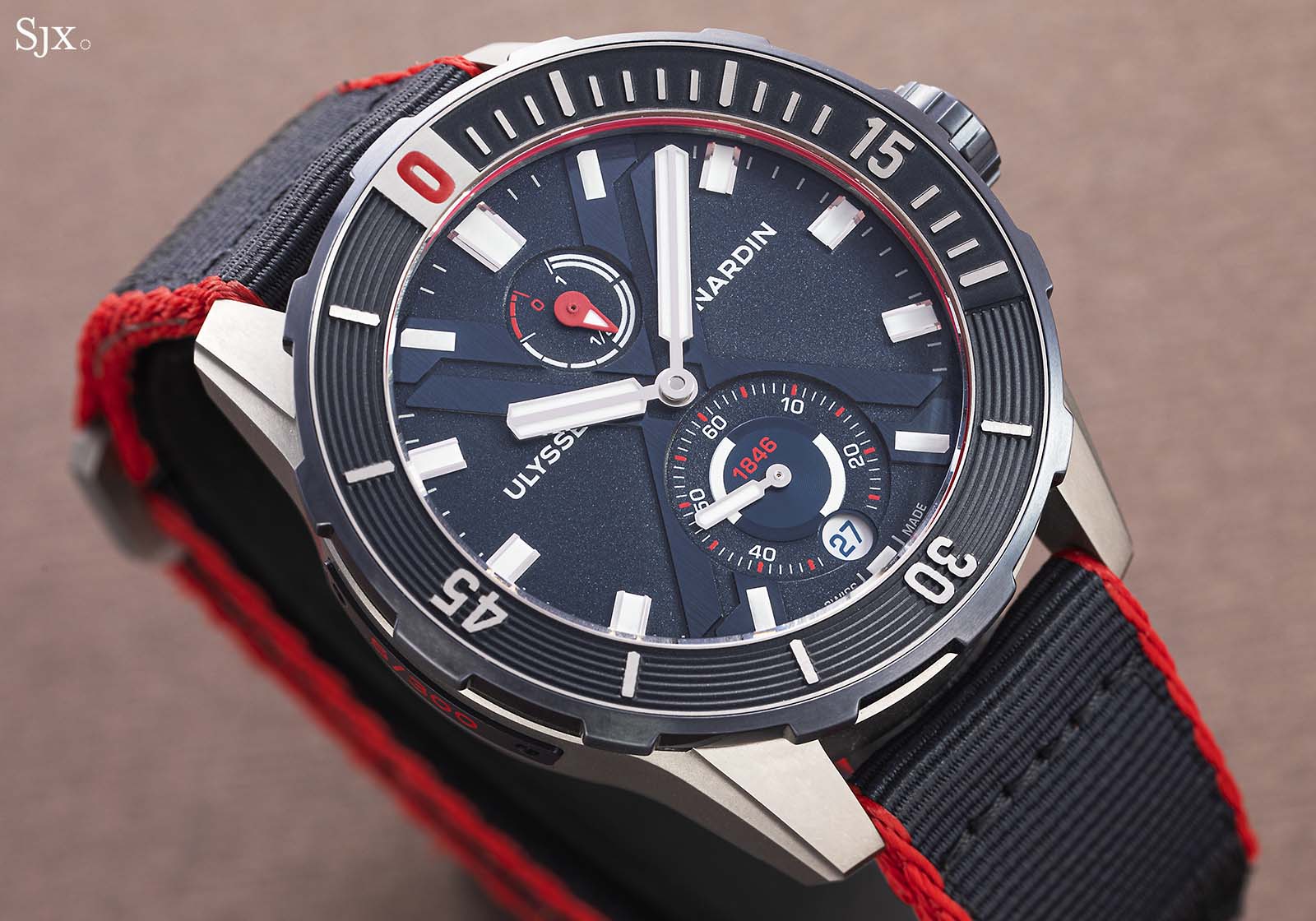 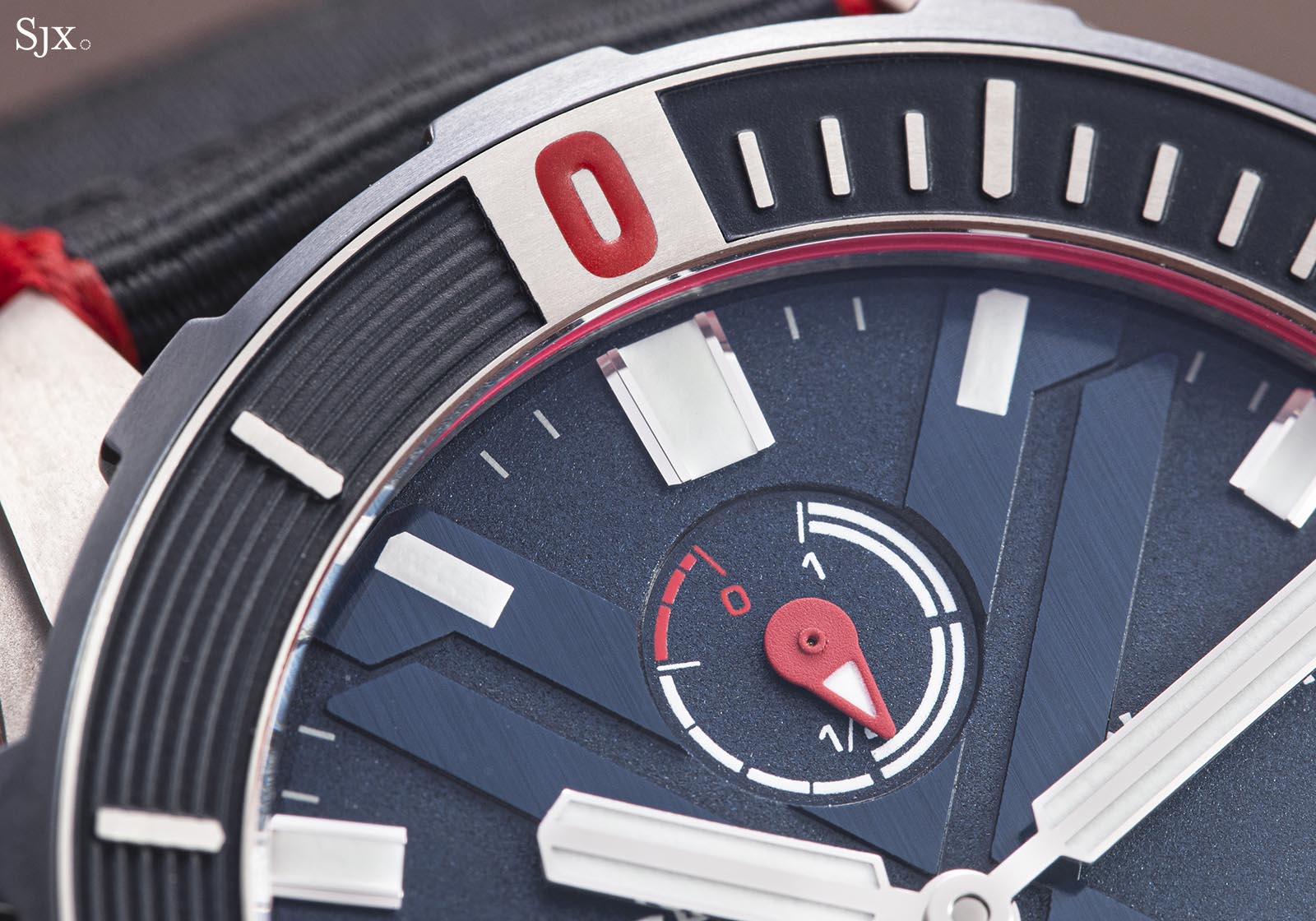 The blue dial is also simpler, with a brushed raised “X” against a frosted surface. Crucial indicators such as the elapsed time marker is in red while the seconds hand is filled with white Super-Luminova. 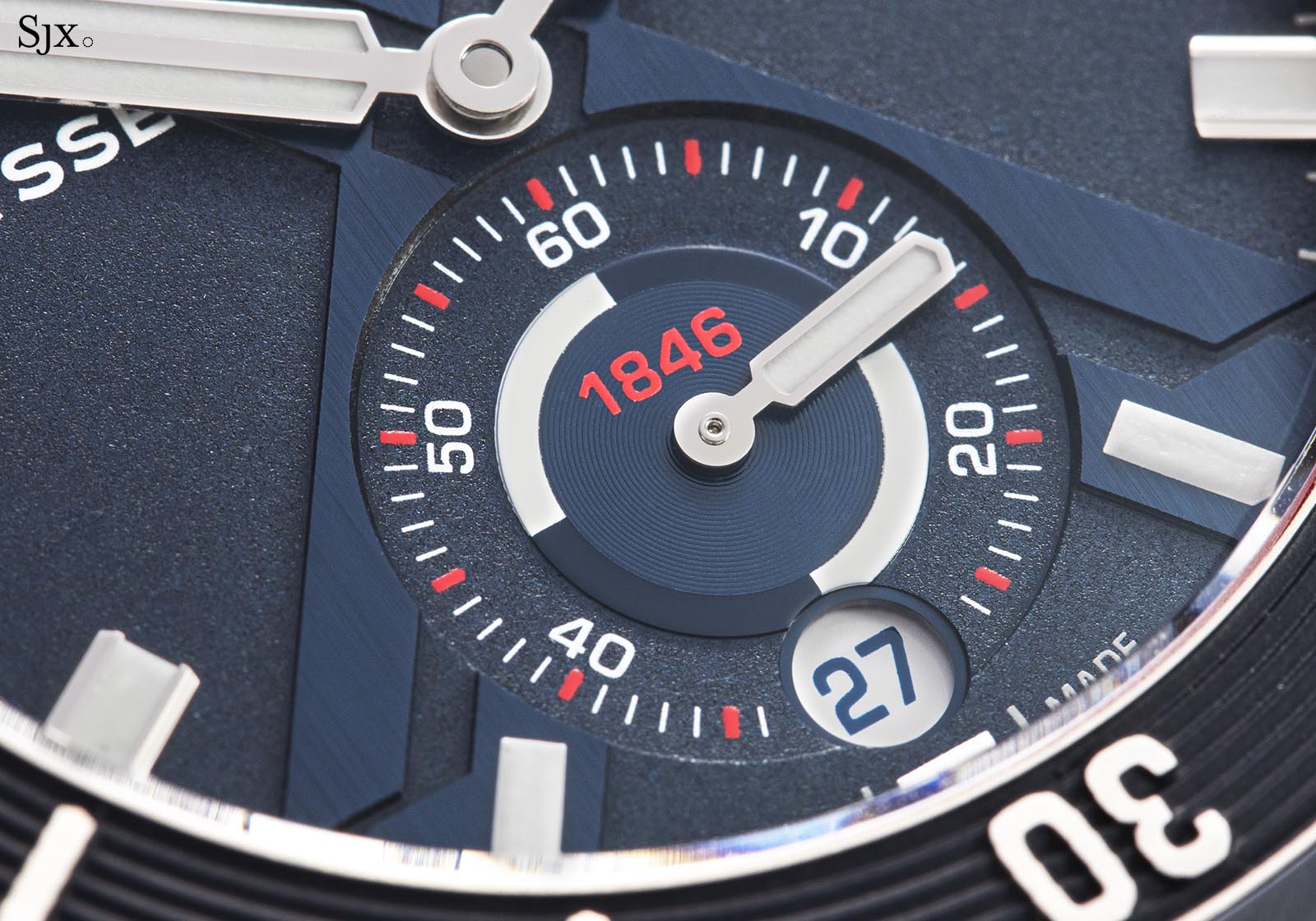 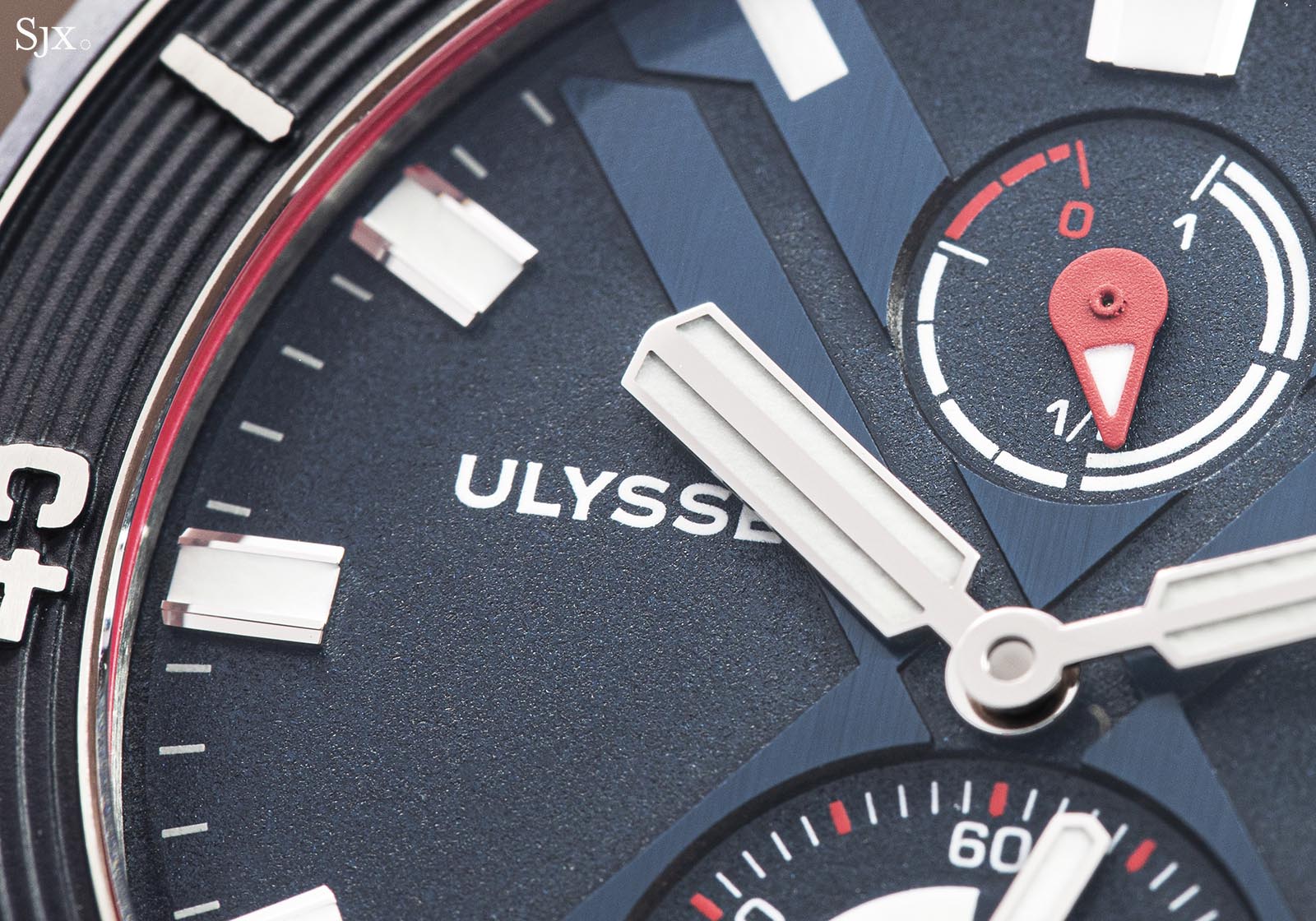 Importantly, both watches are powered by the robust in-house cal. UN-118 with no fewer than three major components rendered in exotic materials. Firstly, it boasts an escapement – pallet fork and escape wheel – made of DIAMonSIL.

Patented in 2007, DIAMonSIL is essentially fortified silicon – a layer of synthetic diamond over silicon – offering all the qualities of silicon including anti-magnetism, lightness and the ability to be fabricated precisely via the LIGA photolithography technique, but with an improved surface hardness to ensure durability.

On top of that, the movement is also equipped with an in-house free-sprung balance wheel with four poising screws sitting in recesses on its rim. It is attached to a silicon hairspring and is secured to the base plate by a full bridge – anchored at both ends for stability as compared to the more aesthetic balance cock, which is only fixed at one end. The movement operates at a frequency of 4 Hz and offers a 60-hour power reserve.

While the UN-118 in this watch is not COSC-certified, it was no doubt designed to meet and even surpass chronometer timing standards. At the moment, Ulysse Nardin is one of only four watch companies (Swatch Group, Rolex, and Patek Philippe being the other three) with proprietary silicon hairspring technology. And of the four, only Ulysse Nardin wields the rights to DIAMonSIL.

While there are too many divers that can be had for under US$10,000, few have the same ambitious aesthetics or technical qualities as the Diver X Cape Horn and Nemo Point; they are arguably singular within this price bracket.

While design is subjective, the UN-118 movement within is one of the most impressive in the price segment.

For the world's most extreme yacht race.