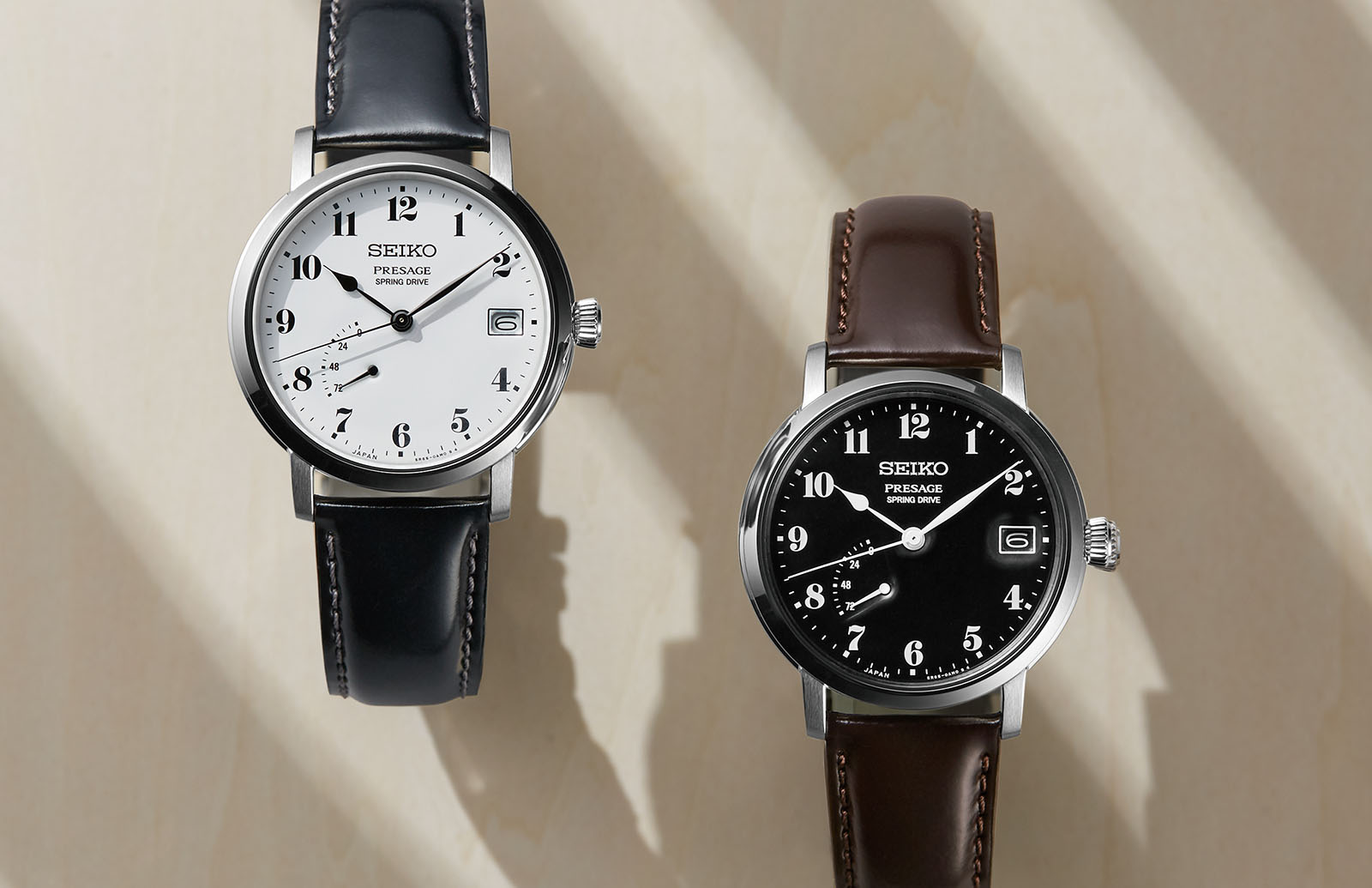 Seiko has cultivated its Presage collection as one that offers watches featuring dials decorated with artisanal techniques like Shippo enamel or Arita porcelain, but at extremely affordable prices.

Now Seiko has just rolled out the first-ever Presage watches powered by the brand’s best-known innovation – the Spring Drive, an electronically regulated mechanical movement previously only found in Credor, Grand Seiko and Prospex watches. And the Spring Drive has been combined with a decidedly more traditional face, with both new models featuring vitreous enamel dials. 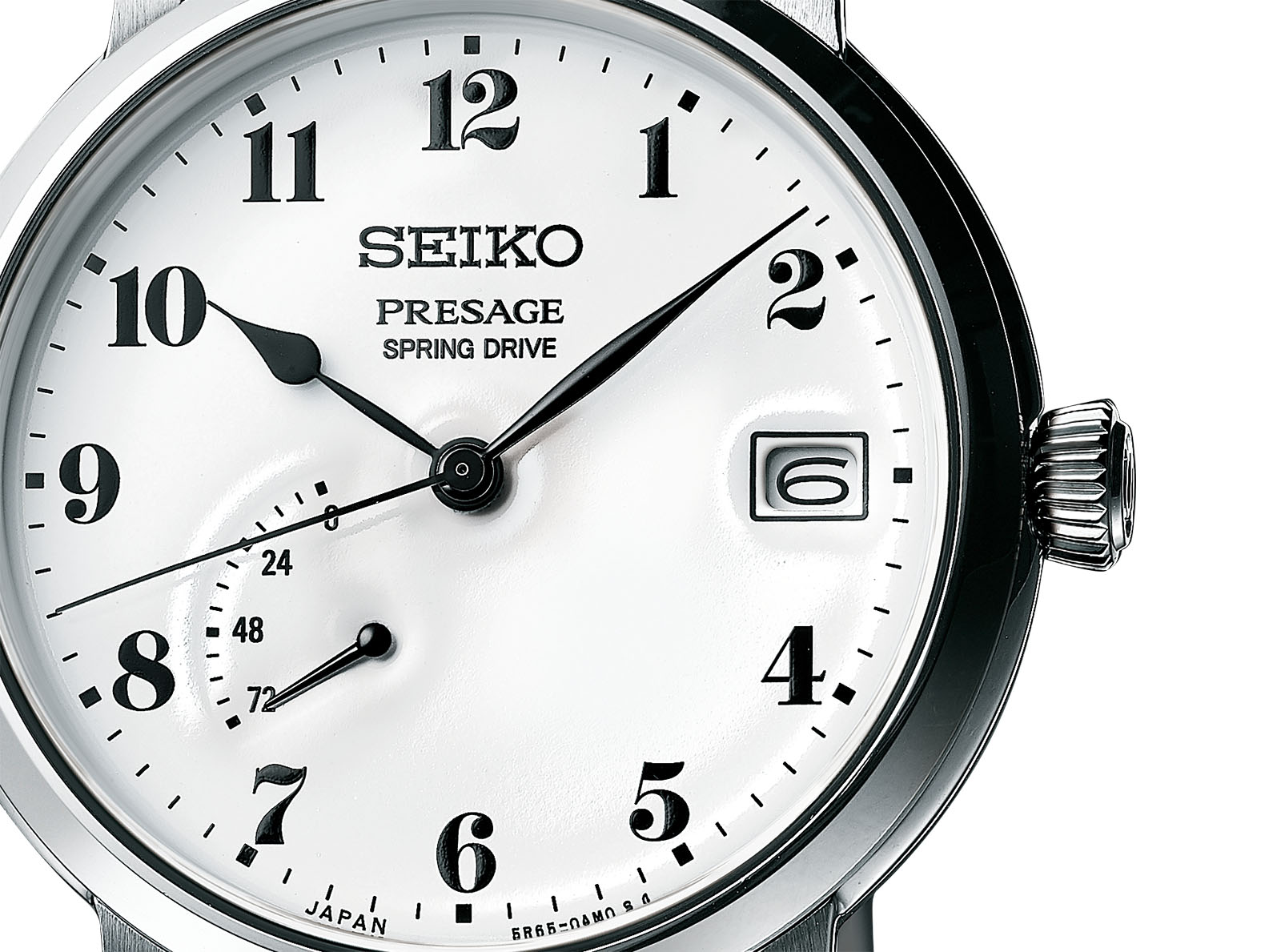 Available in either white or black, the enamel dials are once again produced by master craftsman Mitsuru Yokosawa and his team, who are adept at producing enamel dials of high-quality and in large quantities, but relatively low prices.

The clean and slightly retro dial design, however, is the work of the design studio founded by Japanese industrial designer Riki Watanabe. After his death in 2013, the design of his work was entrusted to his colleague, who stuck closely to Watanabe’s ideals of functionality and beauty in the conception of the watch. 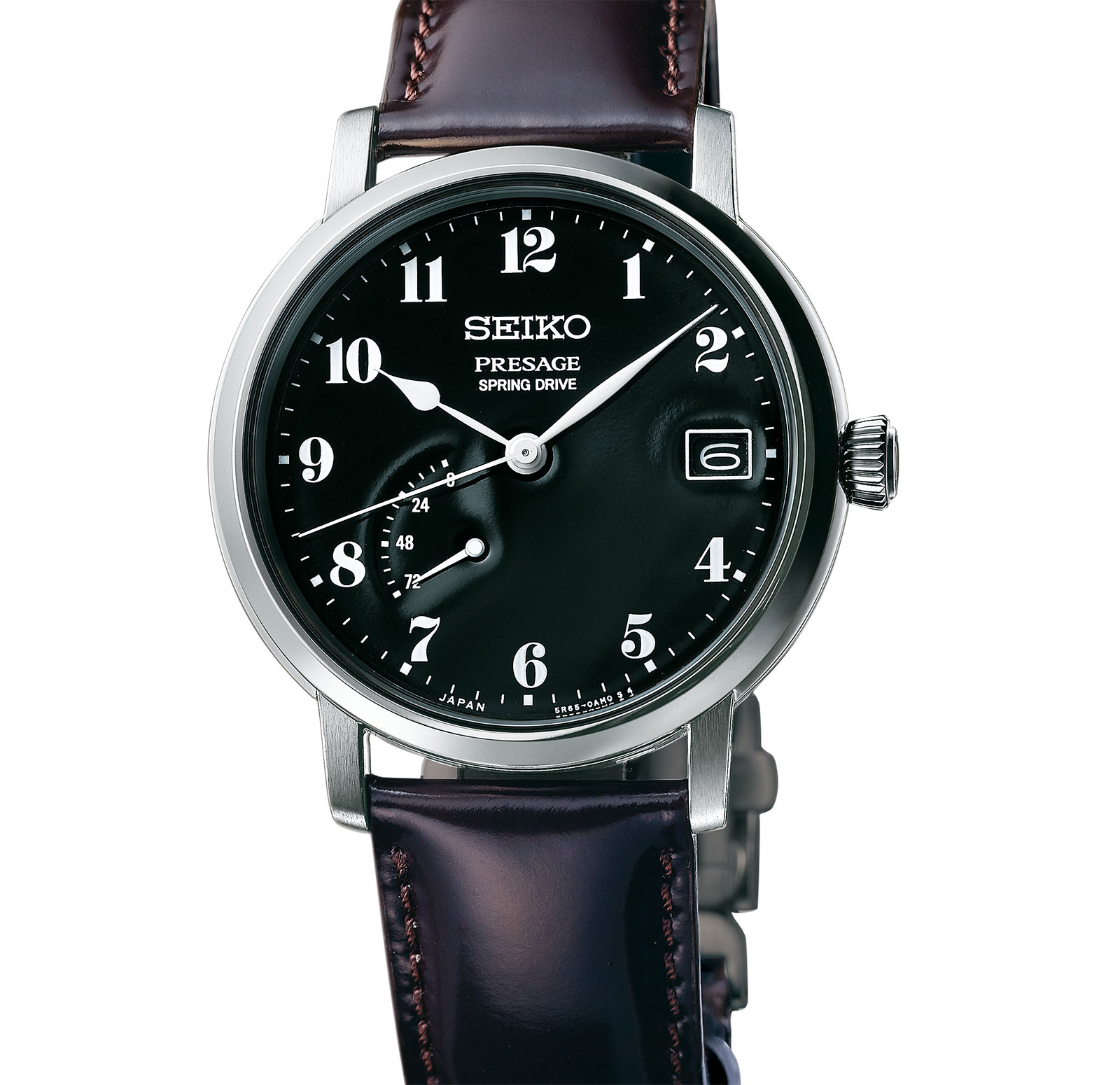 The dial is characterised by a striking clarity thanks to the high contrast between the hands, hour markers and dial, as well as Arabic numerals in Didoni typeface, a favourite of Watanabe.

Notably, the date is properly integrated into the dial design with a date wheel that matches the colour of the dial, while the combination of the contrasting frame and date numeral matches well with the weight of the other Didoni numerals. 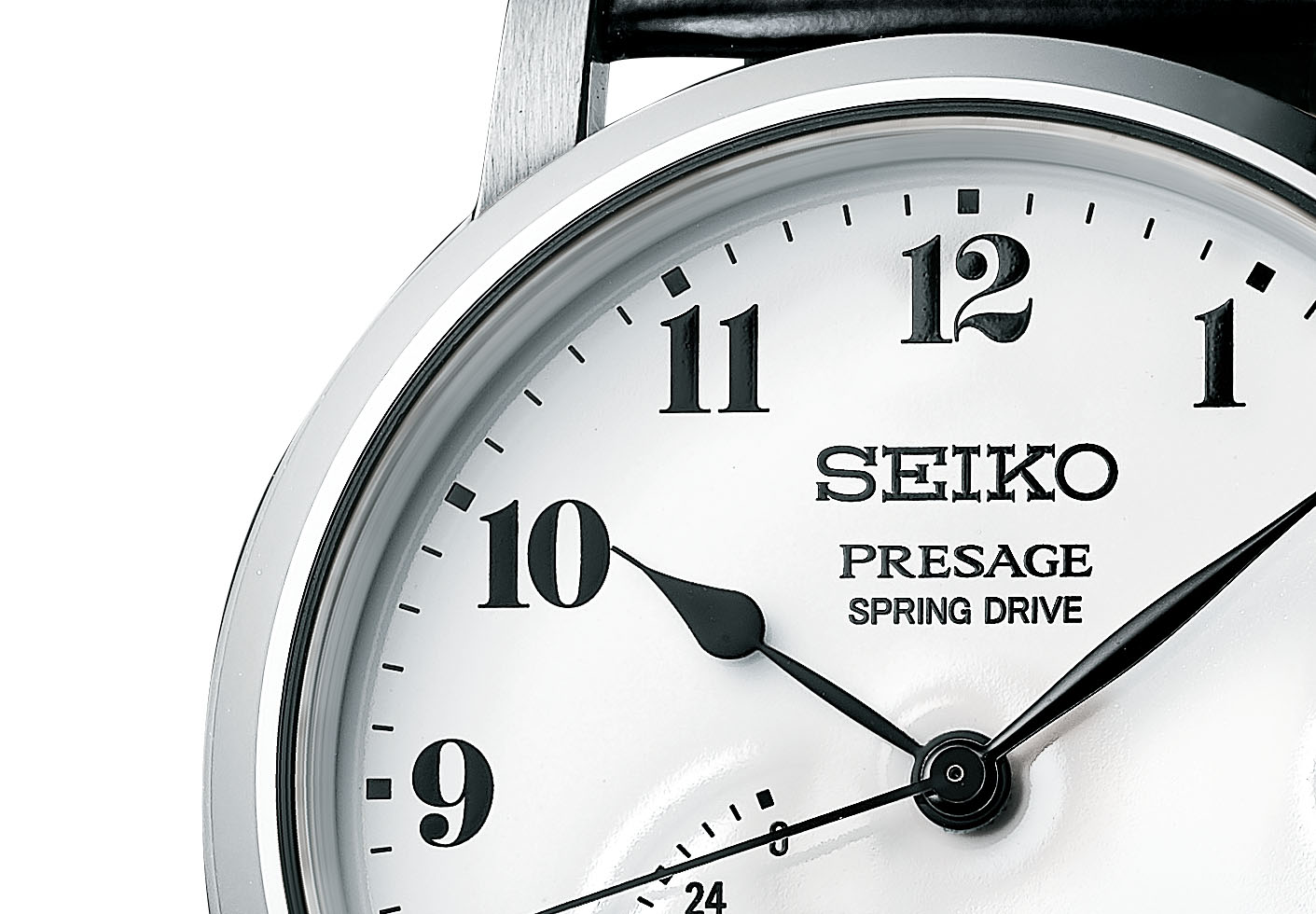 Because of the use of a Spring Drive cal. 5R65 movement, the dial has a familiar layout, with the signature feature of the Spring Drive: a prominent power reserve display in between seven and eight o’clock.

As with the standard automatic Presage, the case is in stainless steel and measures 40mm wide. But unlike other Presage models, the lugs of the case are slim and angular, which corresponds well with the stark colours and clean lines of the dial.

Visible through the sapphire caseback, the Spring Drive movement is self-winding but can be manually wound with the crown as with any mechanical movement. 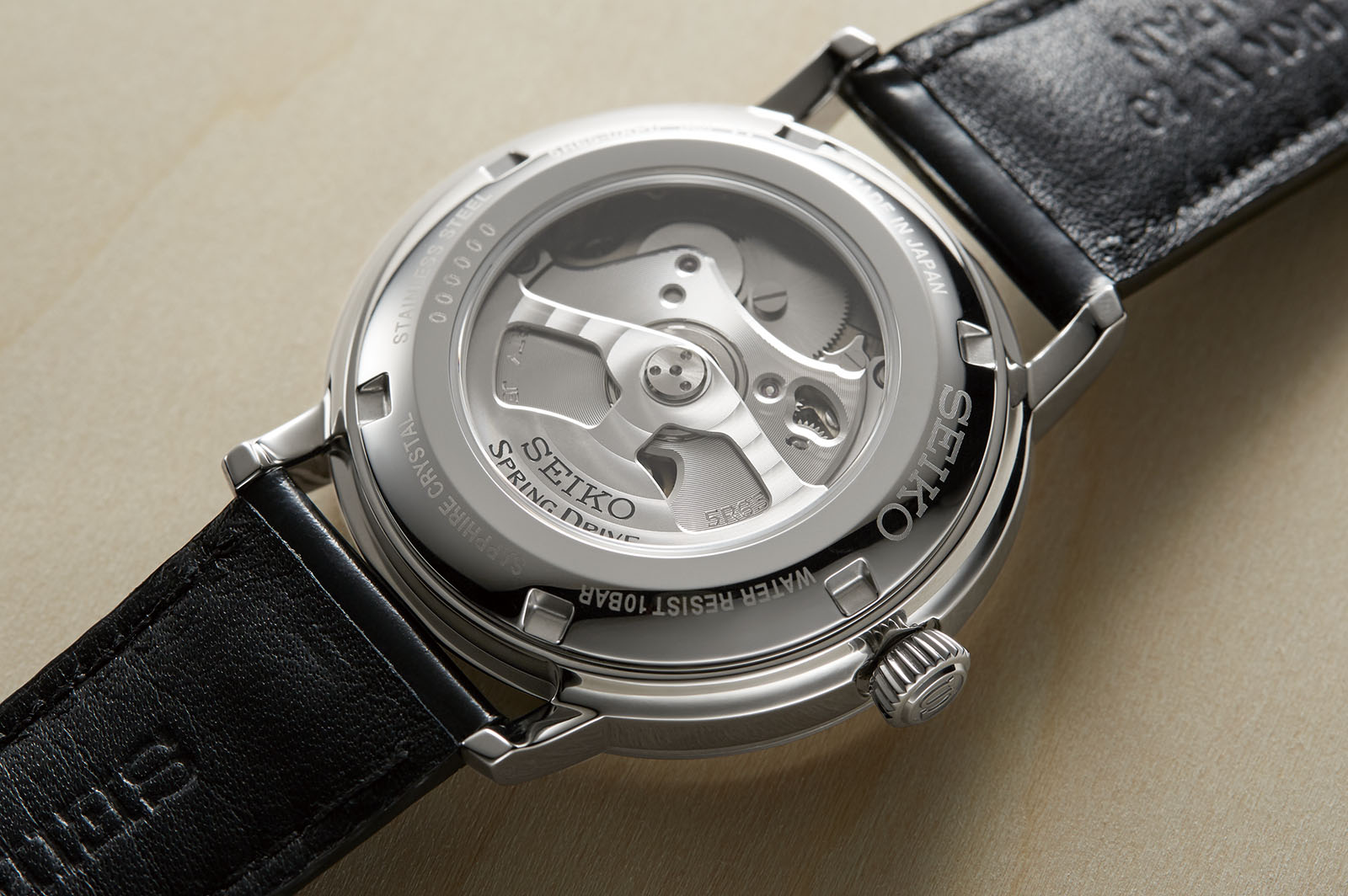 At its core, the Spring Drive combines a traditional mainspring and gear train with a technically advanced regulator. Instead of an escapement, the Spring Drive utilises a unidirectional glide that makes eight revolutions a second. The glide wheel is connected to the gear train and is responsible for showing the time on the hands.

The regulator is thus the only electronic component of the watch, the rest are entirely mechanical. The seconds hand of the watch therefore doesn’t tick and instead glides smoothly. As such, the Spring Drive runs within a second a day, and a maximum of 15 seconds a month.

The Presage Spring Drive is priced at €4,650 and will be available from October.

Hands-On with the Seiko Presage Shippo Enamel SPB073J1 and SPB075J1