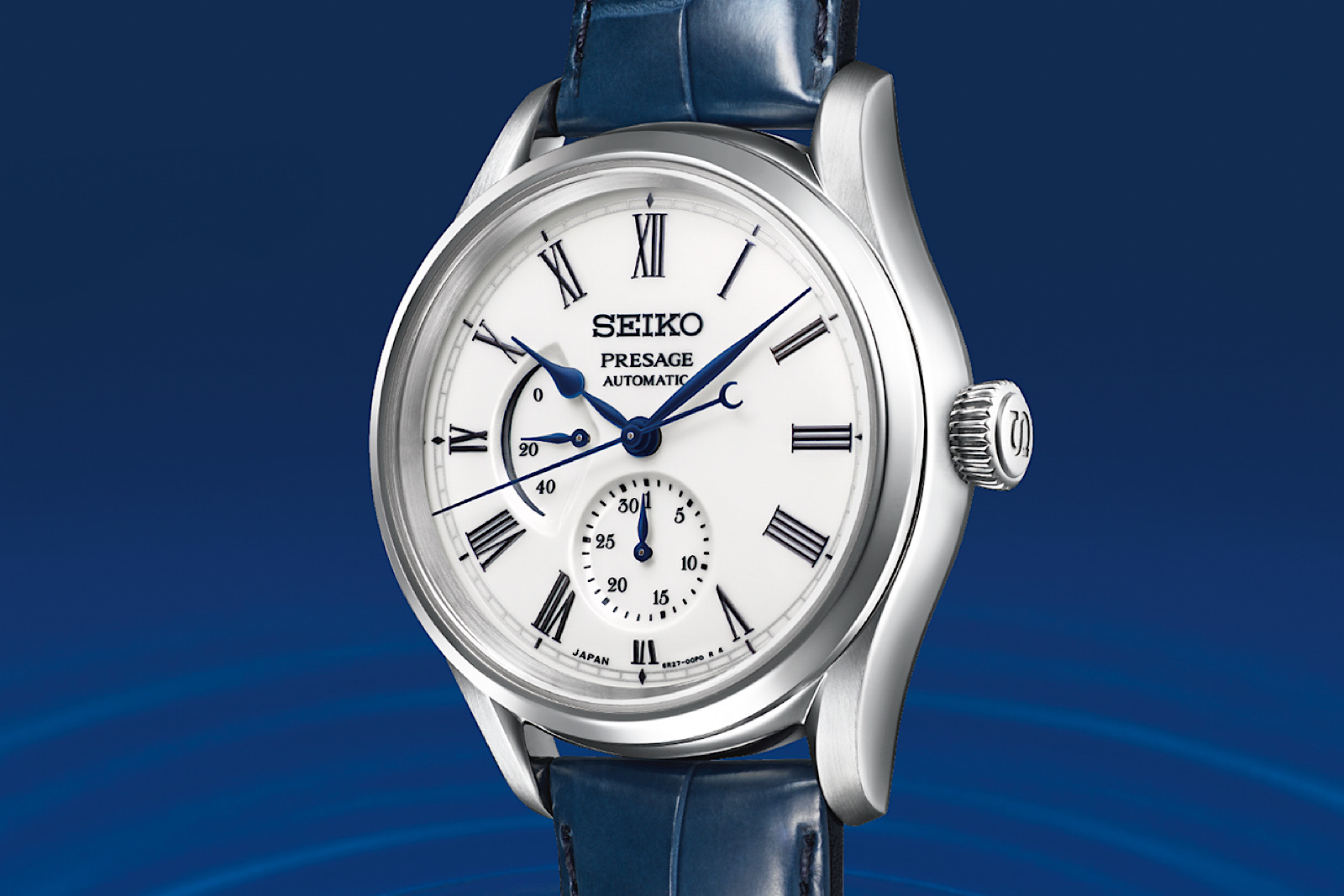 Having gained a big following for its tremendous value proposition, the Seiko Presage collection often features dials in artisanal finishes such as fired enamel and urushi, combined with solid movements and affordable prices. The latest to join the collection is the Presage Arita Porcelain Dial “Suigetsu”, which has a pure-white porcelain dial matched with dark blue hands and markers.

The colours of the watch take inspiration from Suigetsu (水月) – literally as “water moon” – which describes a subtle, ethereal beauty that might be an illusion. It is also a nod to Tsukimi, which translates as “viewing the moon”, the Japanese autumn moon festival where the moon’s reflection on water is admired. 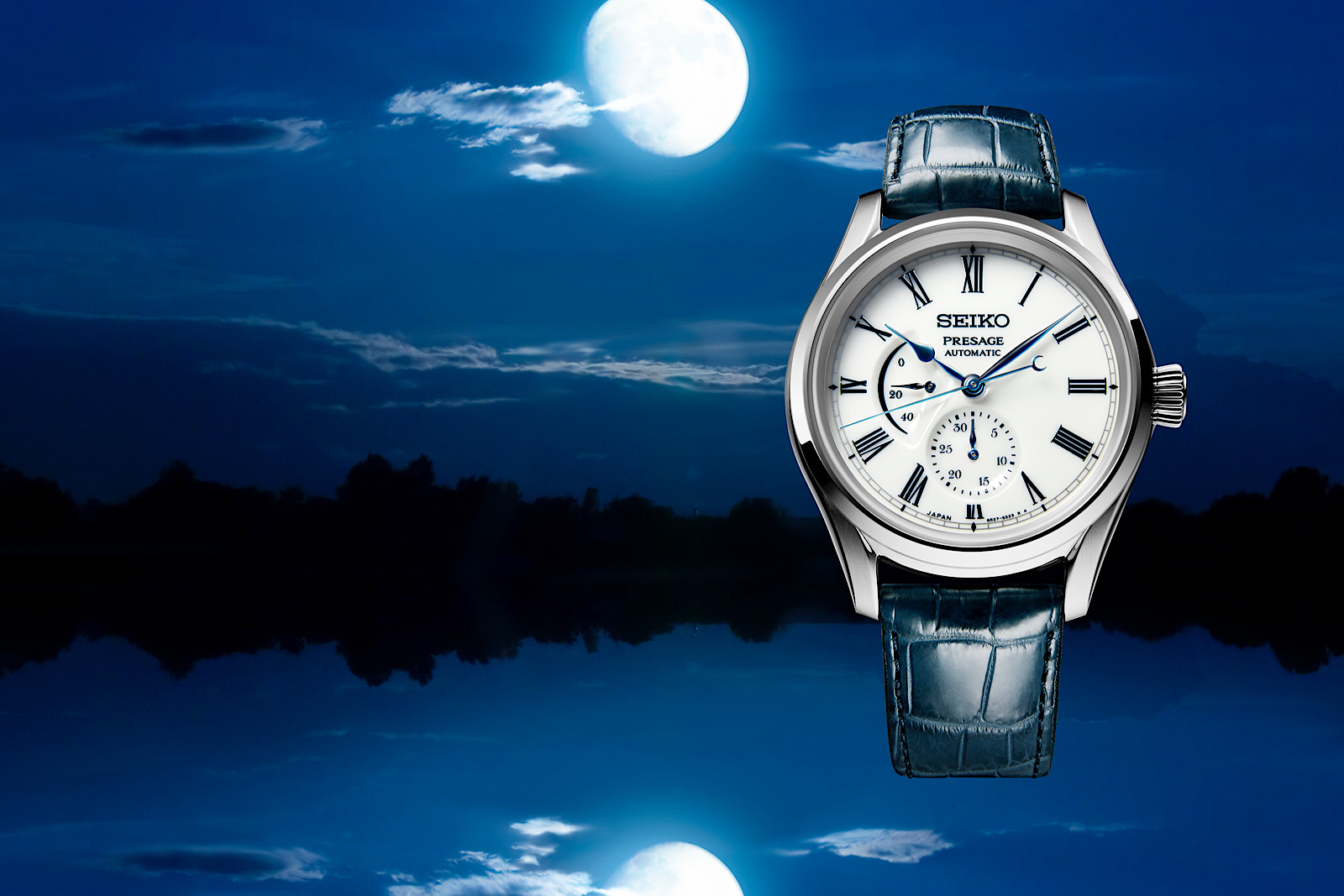 The Presage collection does democratise the artisanal methods used for dial making, the fairly large limited-edition runs dampen the appeal of each release. Even though the dials are made in large numbers, the dial-making process is complex and artisanal. But the new Presage is priced at only US$2,050, which makes it pretty much a bargain, just like many of the other Presage limited editions.

I have always found porcelain dials to have a richer and more profound depth and texture when compared with enamel dials, although both have a similar glossy, smooth appearance. The Arita porcelain dials are exceptional for the price, boasting a silky and creamy finish that’s one of the most appealing dials found on a watch in this price range. 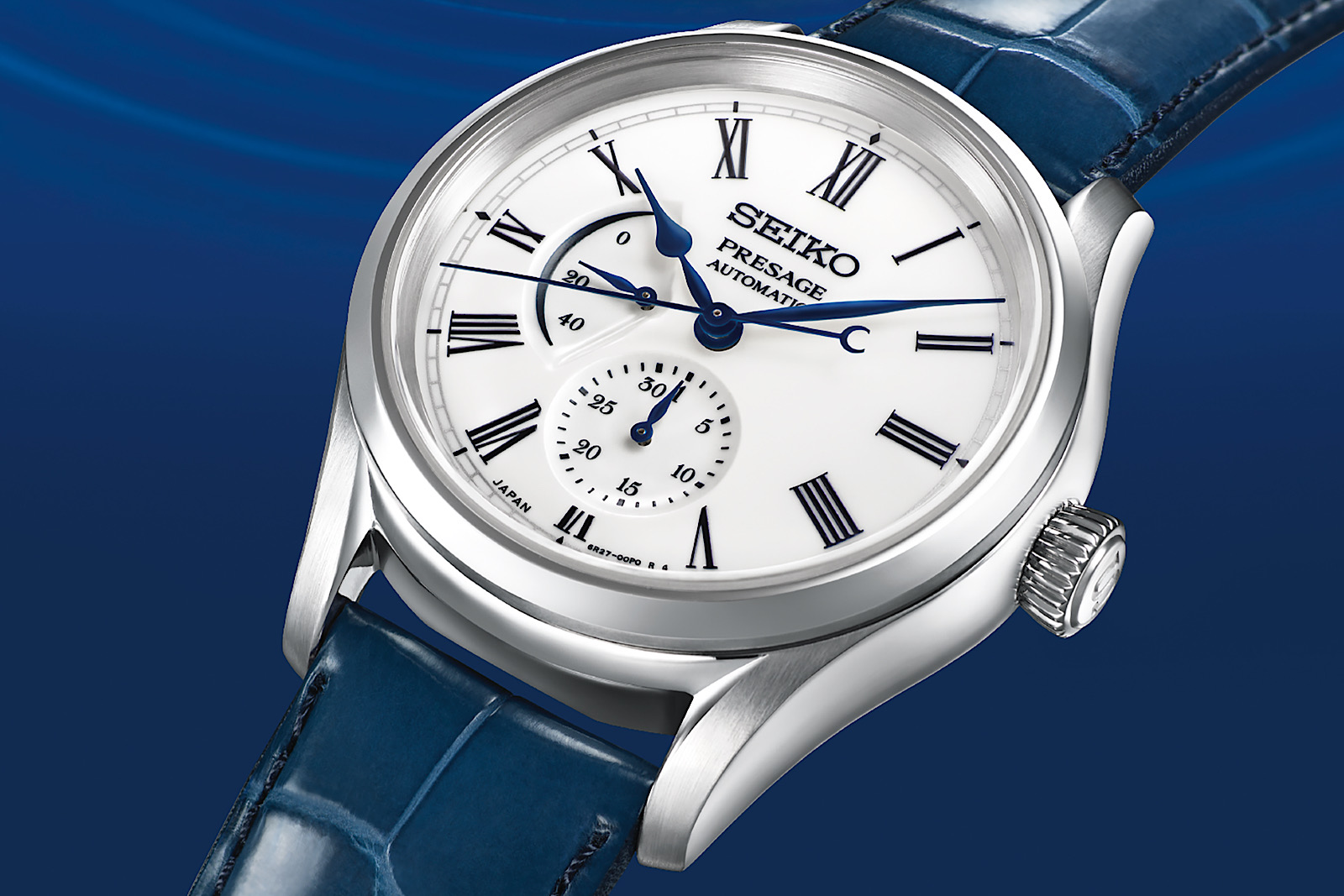 And also because of the thick movement, the Presage case is often a point of contention for many, including myself. The case is 40.6 mm wide and 14.1 mm tall – too large and thick for a dress(y) watch. A solution would be the slimmer 6L35 movement introduced in the Presage SJE073.

Named after the town where porcelain was first made in Japan, Arita porcelain dials were introduced in the Presage last year, also in white with blue hands. While the Arita porcelain dials of last year’s edition had a subtle blue undertone due to the glaze used, the dials on the latest model are a brighter and purer shade of white, thanks to a transparent glaze.

Known as Hakuji, the glazed, stark-white porcelain dial is meant to evoke the moon reflected on water, and leaves the blue hands and markings even more striking and vivid. The look is crisp and pleasing. 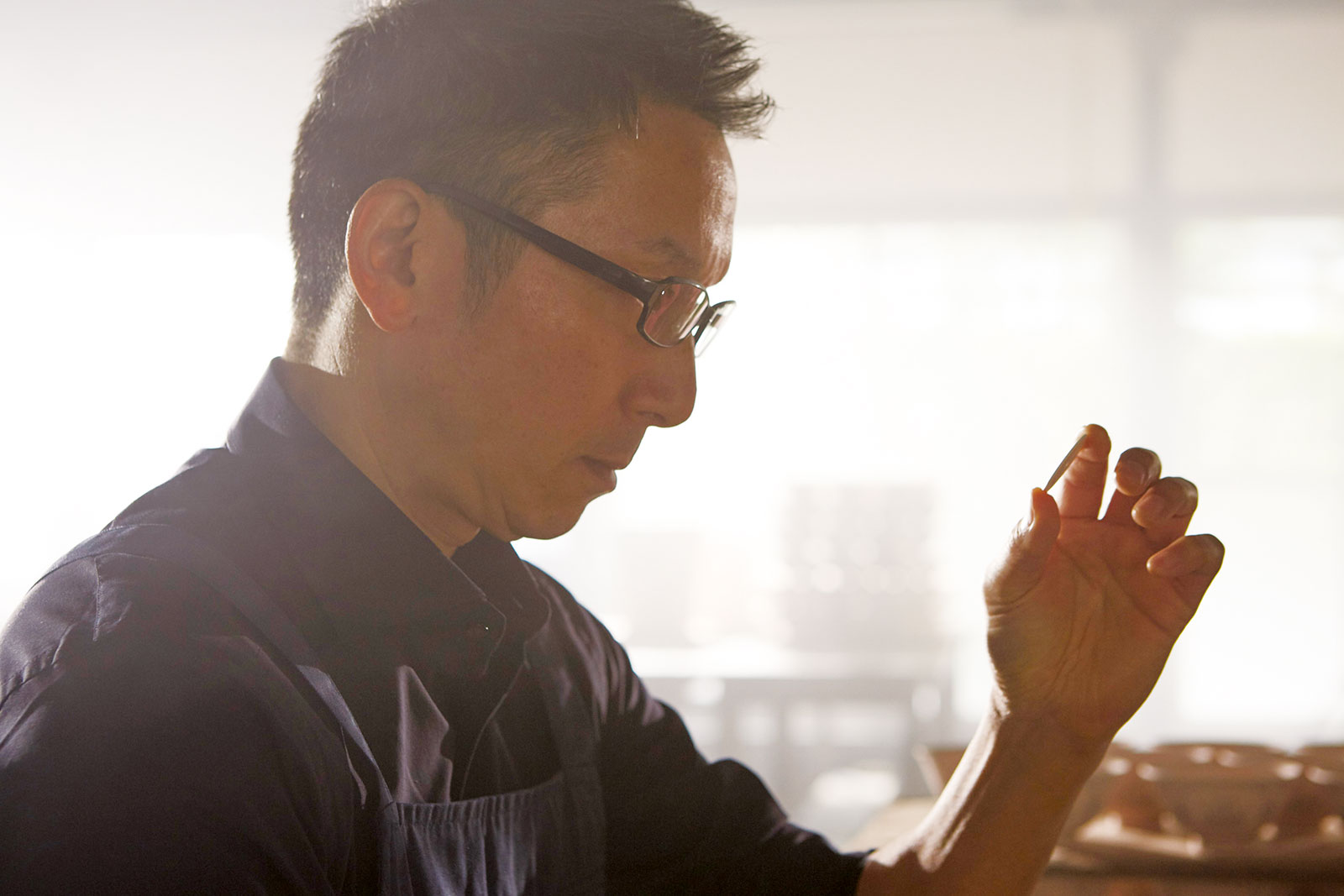 But despite the delicate looks, the dials are far more durable than the moon’s reflection on a lake. As traditional porcelain is too fragile to be used for a watch dial, the formula for the Arita porcelain dials in the Presage was tweaked to make it four times stronger.

The dials are produced by Hiroyuki Hashiguchi, a craftsman who’s a director of Shingama, a porcelain maker in the town of Arita. First formed in a mould to ensure the precise dimensions required for a dial to fit correctly and flatly, the porcelain dials are then fired and glazed several times until the ideal finish is achieved. 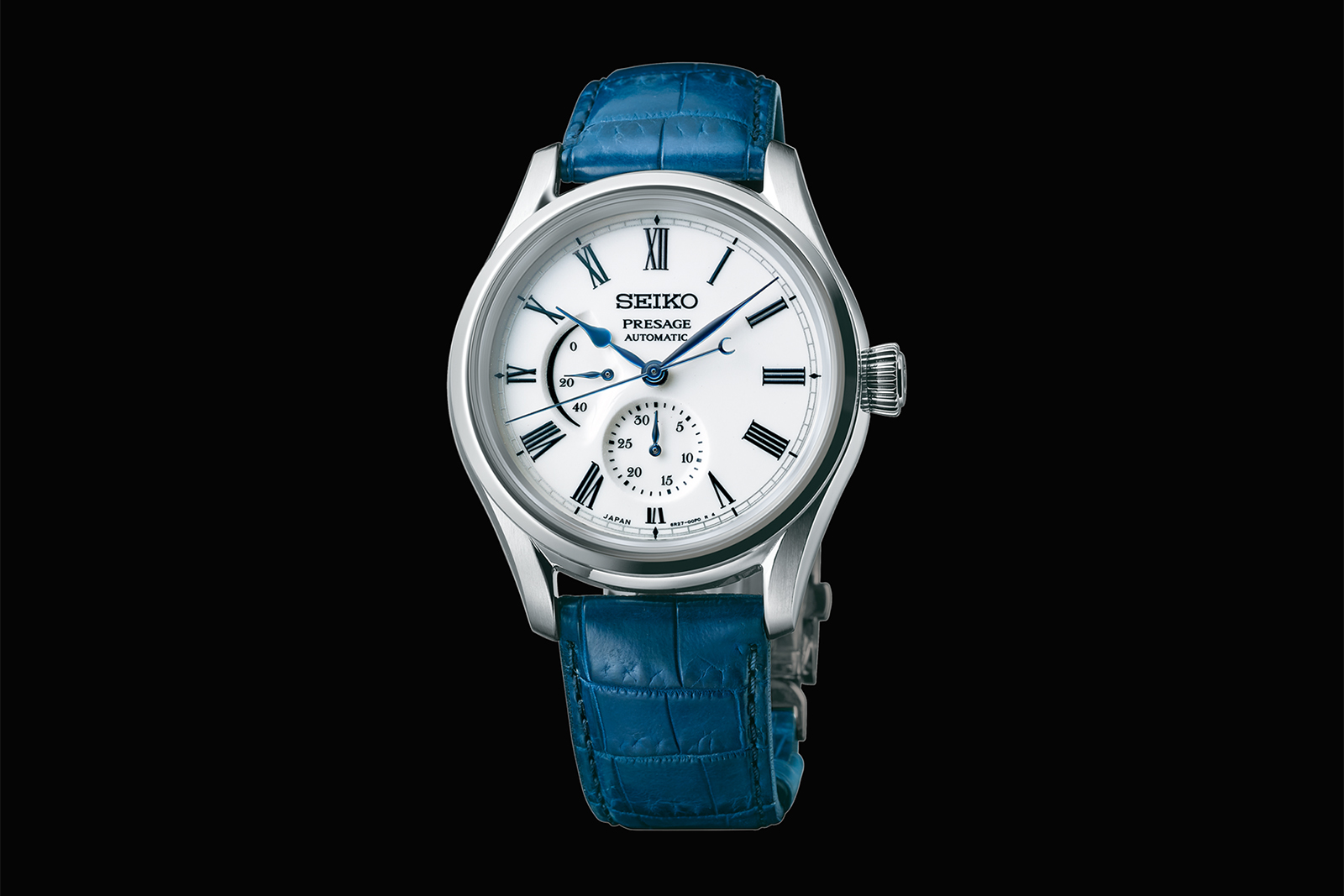